Flaky and tender when you nail it, tough as rawhide when you don't, pie crust divides all of us bakers into definitive categories: those who succeed; those who fail, but keep trying; and those who buy Mrs. Smith's.

Why is pie crust so tough — often literally? Well, it's all about the fat, the water, and the flour. Three simple ingredients that, together, can create a masterpiece — or mayhem. 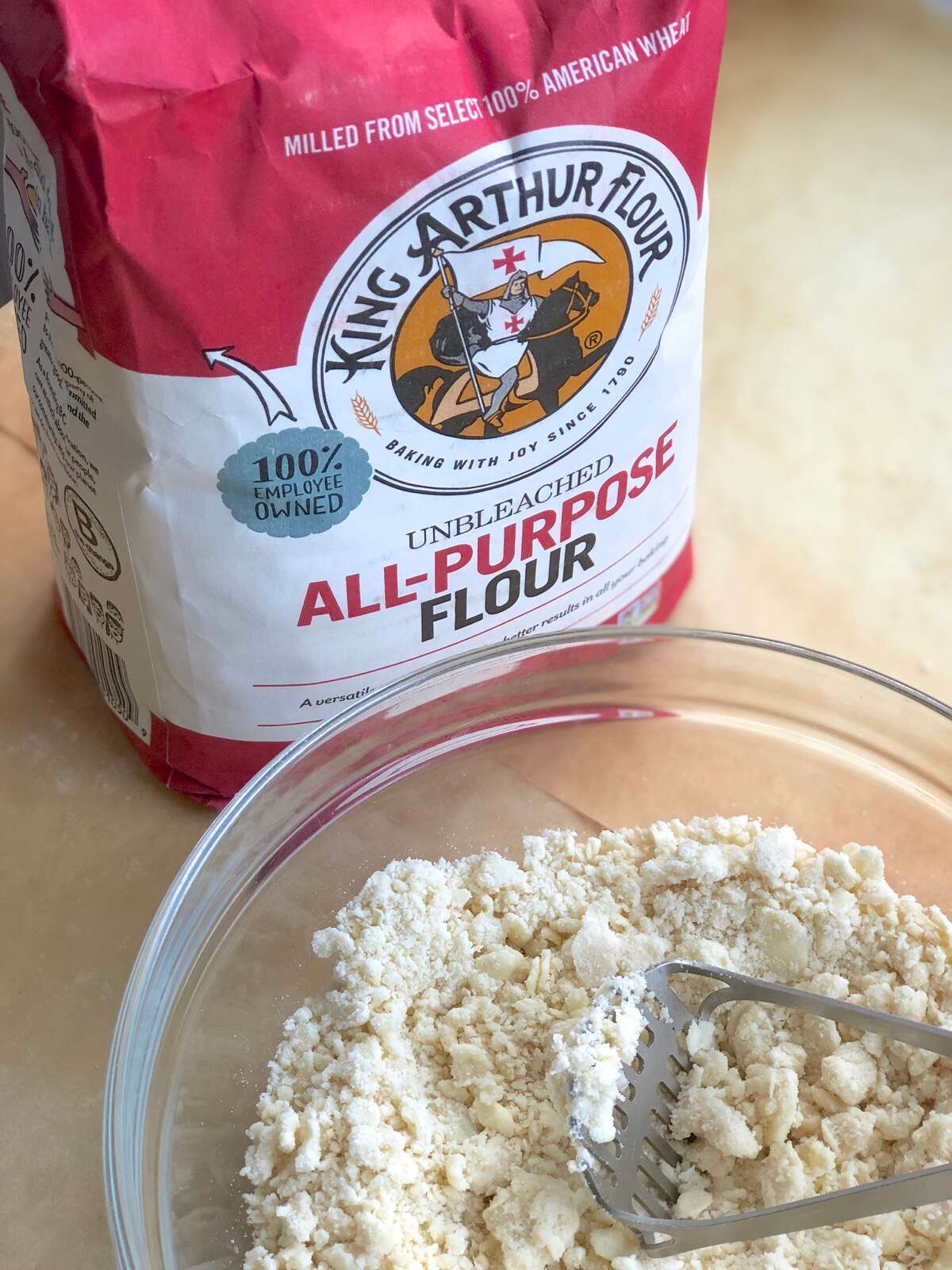 Butter vs. shortening in pie crust: the flour

Flour does make a difference, but not as much as you might think. A lower-protein pastry flour, like our Pastry Flour Blend, will inherently make a more tender crust (and will also be a bit more fragile when you're rolling it out).

Truthfully, I use our all-purpose flour in my pie crust; I have to be careful not to work it too hard once the water is added (for fear of developing its gluten), but for me, it offers an ideal blend of good results and ease of handling. 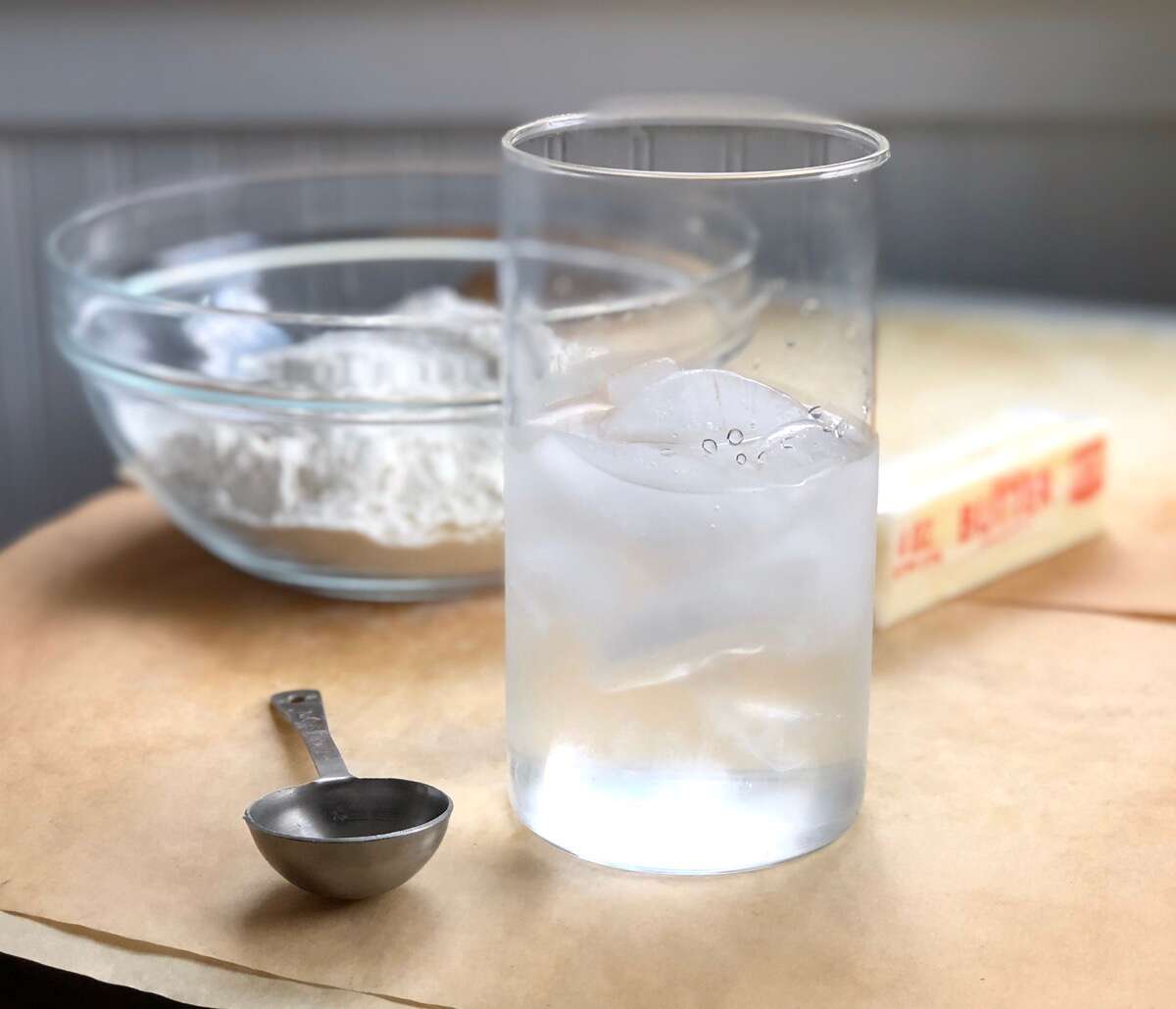 Make it ice water. Simple enough, right? Sure, you can use milk, add an egg, and try other types of liquid, but water produces reliably good results — so why not?

Ah, now comes the ingredient that arguably makes or breaks a pie crust, and also creates the most debate: 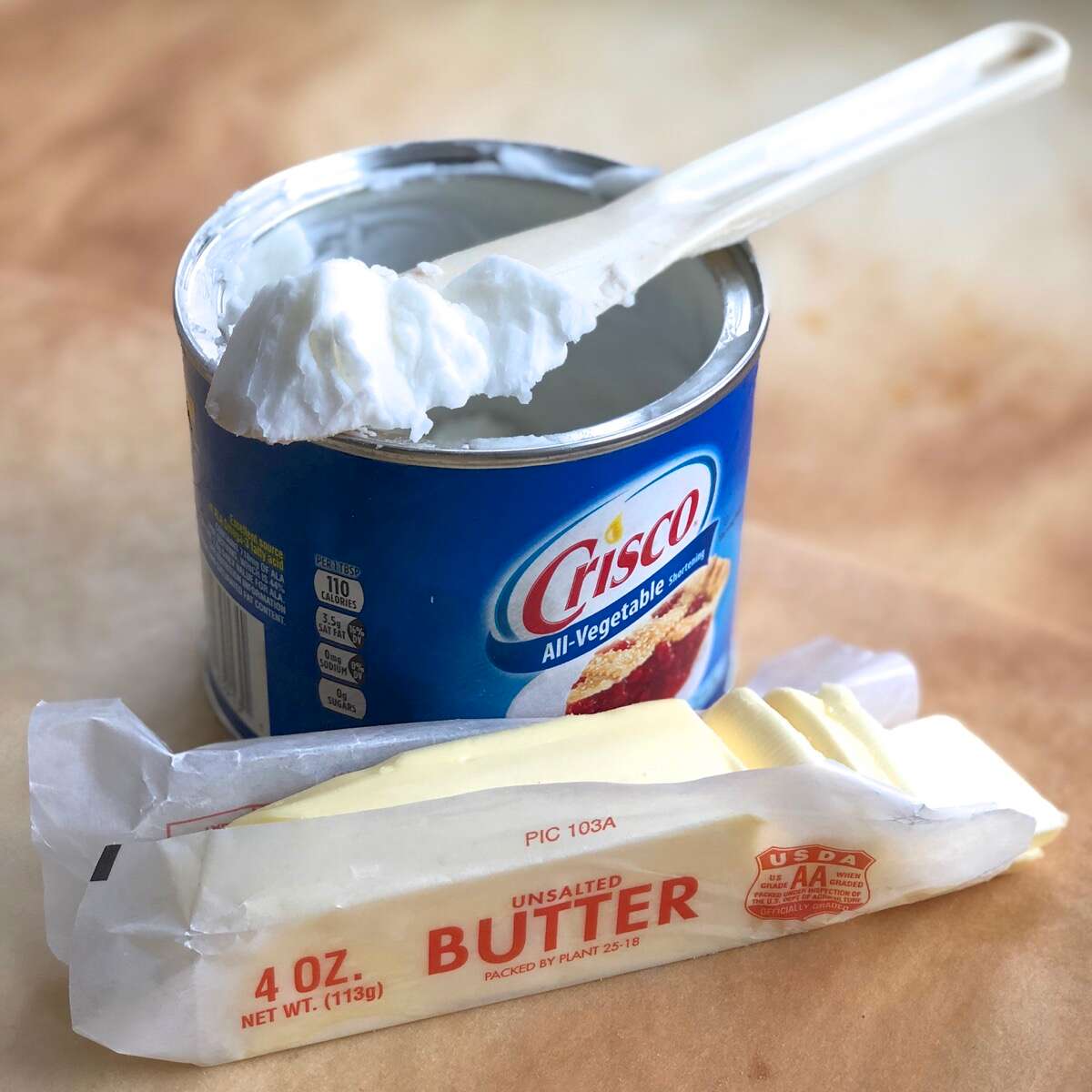 Your grandma used lard. Your mom used shortening. You use butter. Are all fats created equal?

I decided to find out.

First thing I did was rule out lard. NOT BECAUSE IT'S NOT A PERFECTLY GOOD FAT AND CAPABLE OF MAKING WONDROUSLY TASTY PIE CRUST.  After all, our ancestors made lard-crust pies for centuries and, like lard-fried doughnuts, they were delicious.

I'm ruling out lard simply because good, fresh lard isn't as universally available as shortening and butter. So if you love lard, and have a good supplier – stick with it.

But if butter and vegetable shortening are your choices, read on. 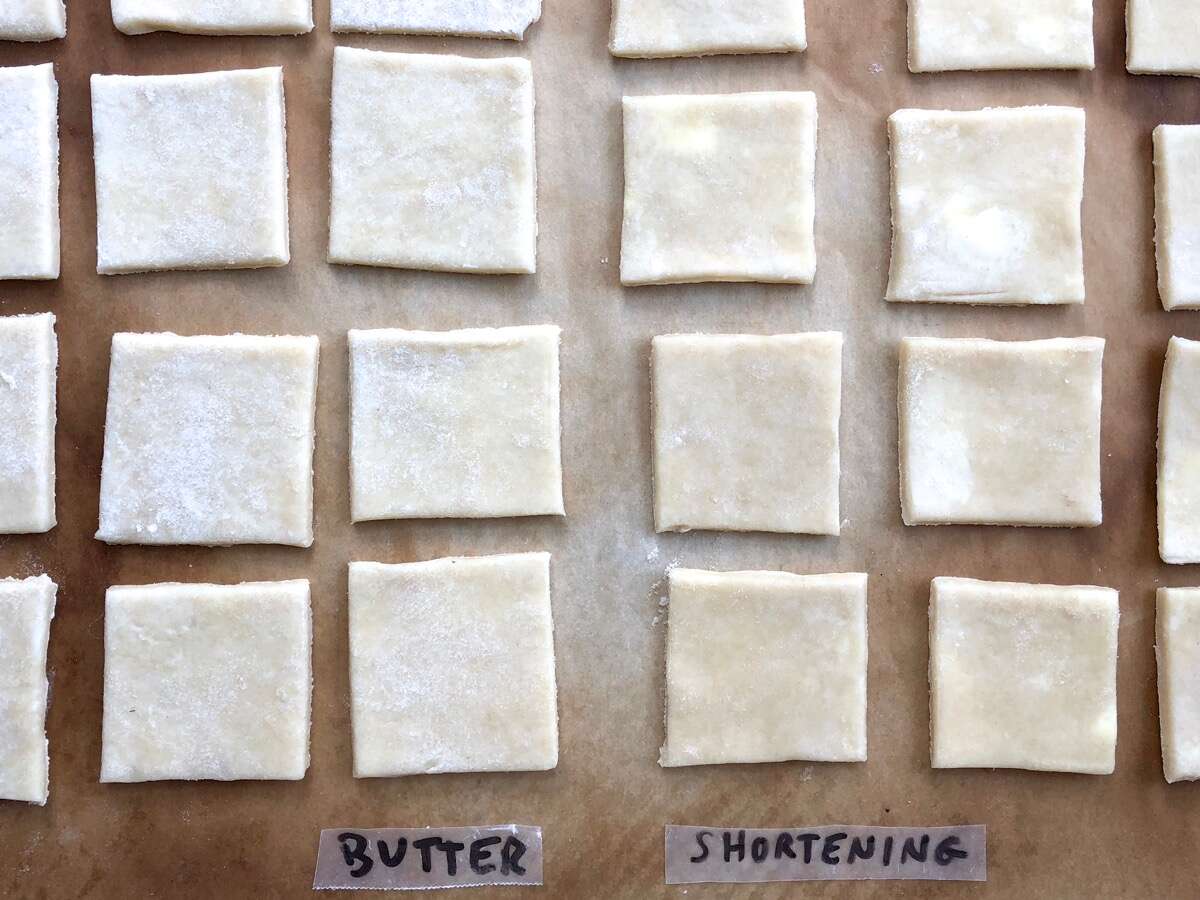 For years, I've alternated between two favorite recipes: Classic Double Pie Crust, a crust made with both shortening and butter; and All-Butter Pie Crust.

One Thanksgiving I'd go with an all-butter crust for my Apple Pie; the next, I'd make my Lemon Chess Pie with the shortening/butter clone.

But never had I made both crusts in tandem, and done a side-by-side comparison. Which was flakier? Which tasted better? 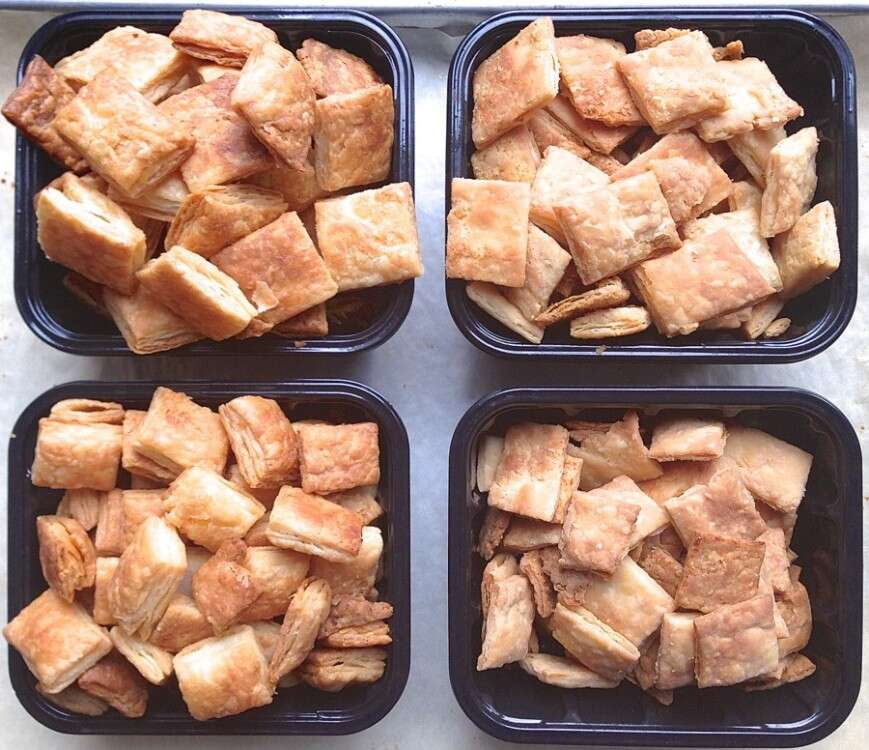 This was the year. Having signed up to do a pie demonstration at a local bookstore, I decided I'd best practice both – at the same time.

And I made an amazing discovery (amazing to me; we pie geeks are easily amazed): something I'd always believed to be true was absolutely, categorically, without a doubt not true at all.

I'd always told people that a shortening/butter pie crust would have better texture than an all-butter crust, due to shortening's higher melting point. Why?

Fat keeps the layers of flour/water "matrix" separated as the pie bakes; the longer fat is present in its solid form (score one for shortening, with its high melting point), the more flakes will form, the more tender/flakier the crust will be.

Now, that may be true. I didn't actually count the number of flaky layers in each crust.

But one thing was abundantly clear: the all-butter crust (above left) made a lighter crust, with more defined flakes than the butter/shortening combination (above right).

I was totally puzzled until it dawned on me: butter contains more water than shortening.

As the crust bakes, that water is converted to steam, puffing up the crust (and its flakes) like someone blowing up a balloon. 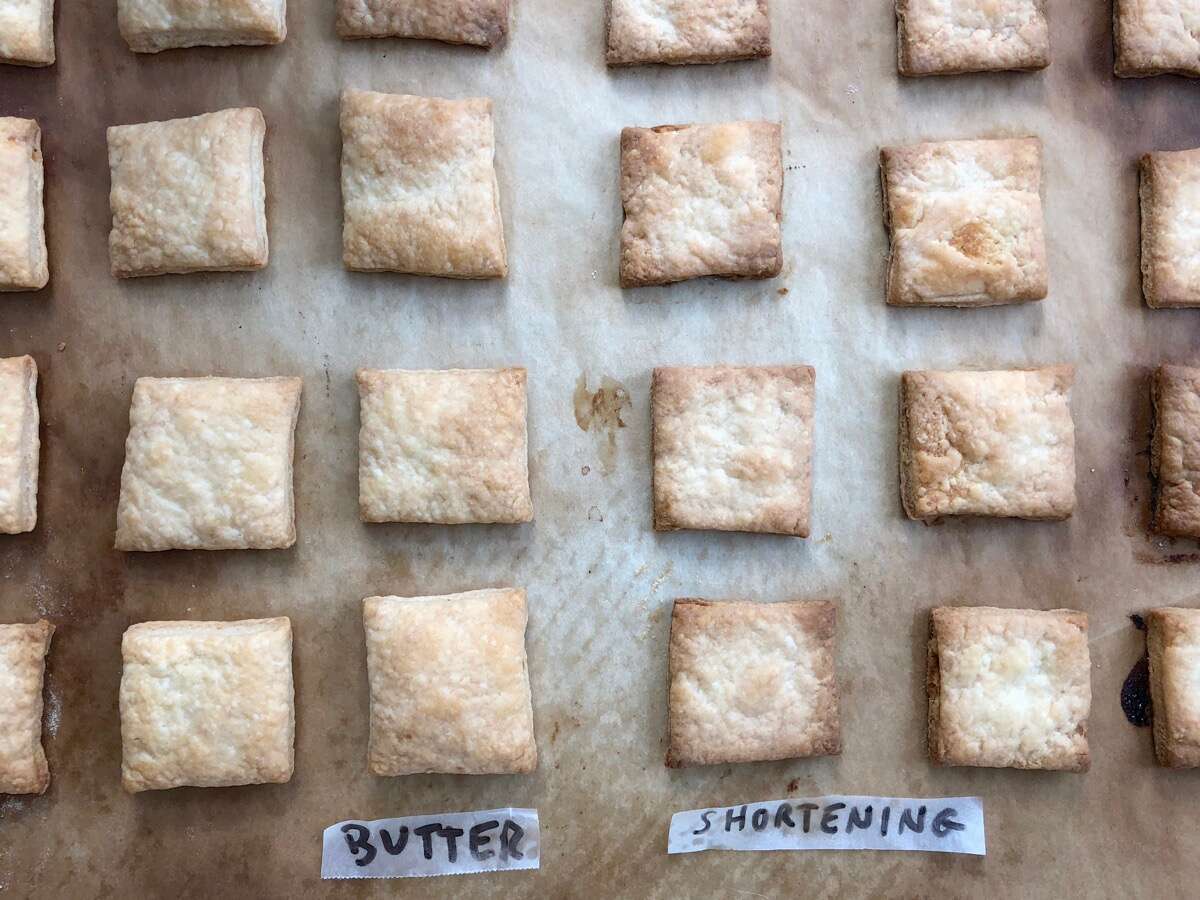 Each fat adds its own distinct flavor

And flavor? The all-butter crust tasted — well, buttery, of course. The butter/shortening crust (which was, by the way, just as tender and flaky as the butter crust, but without its light texture) tasted a bit like butter, and a bit like pie crust — that indefinable something that tells your taste buds, yes, I'm eating a piece of pie.

Both were good — just different. And one of the chief differences was looks: the butter crust produced a very ill-defined edge. My careful fluting basically went up in smoke (er, steam).

So if you're after looks, stick with the butter/shortening combination (or all shortening). If looks don't matter to you, I'd go with the all-butter crust.

What about substituting vodka for water?

While I was at it, I decided to test the famous Cook's Illustrated secret to tender, flaky pie crust: using vodka in place of half the water in the crust.

The theory is that vodka, being alcohol rather than water, will develop flour's gluten less than plain water, thus creating a more tender crust.

The verdict? I couldn't discern any difference in the flakiness/tenderness of the vodka vs. non-vodka crusts. 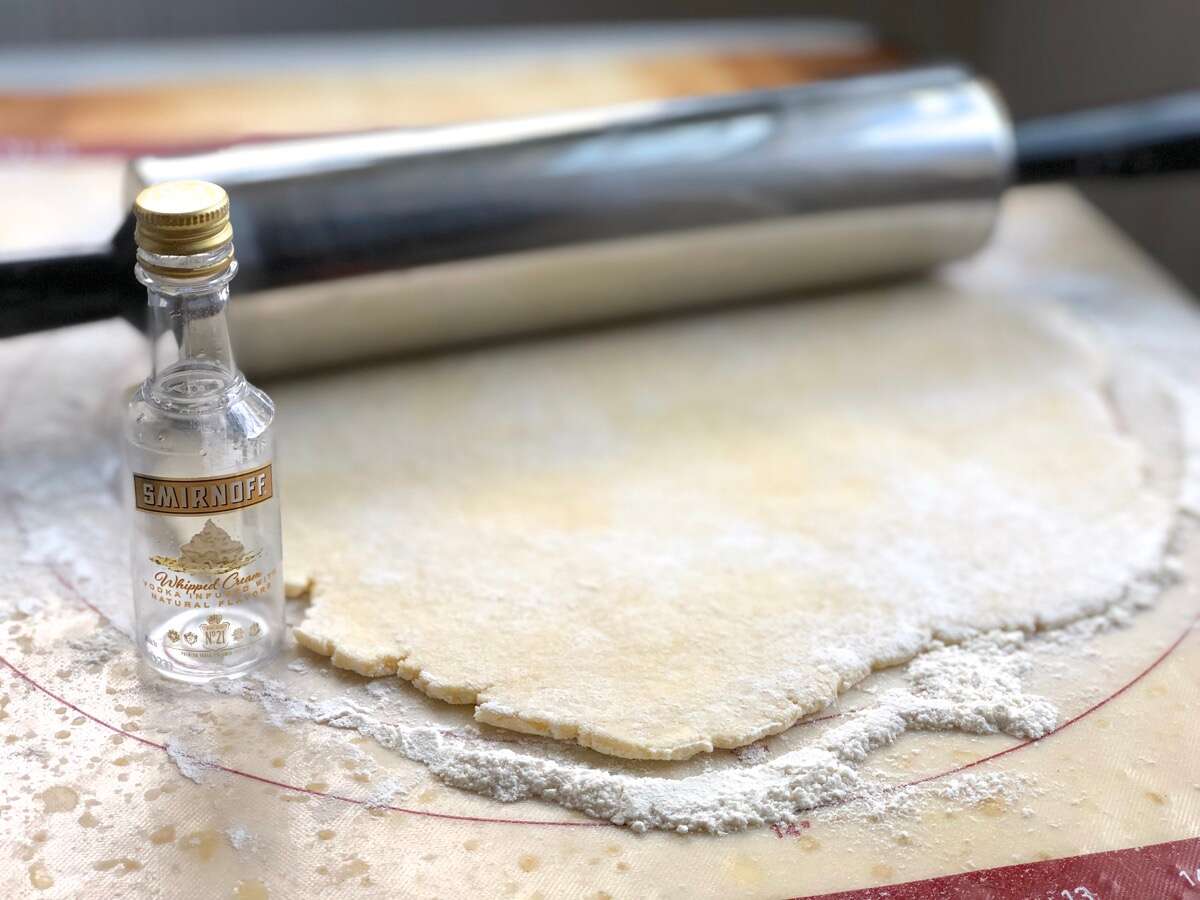 BUT the vodka crust rolled out more easily; with its silken, smooth texture, it was a pleasure to work with.

So would I add vodka to pie crust? Sure. I think I'll even keep a little bottle in the fridge, so it's handy for pie crust or a gimlet — whichever comes first!

OK, I've given you a map. And here you stand at the crossroads, ready to make a decision on the butter vs. shortening in pie crust debate.

Which will it be: Classic Double Pie Crust, or All-Butter Pie Crust?

May the best crust win!

For more handy tips and useful information on pie crust, check out our pie crust guide.

Note: This blog post focuses on the difference between shortening and butter in pie crust, without examining the relative health benefits of each. For health information concerning these fats, speak to a doctor or nutritionist.

Kevin, the shrinking all-butter pie crust is an enemy of many pie bakers. Butter has a lower melting point than other vegetable oils/shortening, which means it doesn't hold its shape as well during baking. To prevent the shrinking crust, you can try chilling your crust for 30 minutes before baking, but if you're looking for a defined design, it's best to use at least a bit of vegetable shortening. As for your second question: the method shown in the video is more like a "rough puff" approach. It creates distinct, flaky layers and makes a delicate crust. The other technique you're referring to is known as fraisage. This melts some of the butter and produces more of a "short" crust. It's slightly more crumbly and is nice when combined with custard pies. We recommend trying both techniques to see which texture you prefer. You might find that each one is suitable for specific pies you make. Happy baking! Kye@KAF
I only use lard for my pie crusts and they are nice and flaky!! Never tried vodka in it but will consider this in future endeavors!! How about the flavored types to match your pie ingredients?? I have used orange juice and apple cider in place of the water with great results!! Happy Baking!! Pies are my family's favs!!
That's an interesting question, fellow pie baker. We haven't experimented with flavored vodka (in baking), but we'd imagine some of the flavor would be left behind in the crust if you're using more than just a few tablespoons of vodka. You'll want to be mindful about the flavor that you use to ensure it pairs well with your filling. If you come across any tasty combinations, feel free to let us know about it! Kye@KAF
I used my mom's delicious shortening pie crust for years and made exquisite pies. Then they began failing--Crisco had changed the way they made shortening. I now use 1/2 cheap vodka for the required cold water and the dough is so easy and the crusts come out magnificent. In everything else I use butter--butter is king. But for pies I still like the taste of the shortening crust...with vanilla in the water, of course!
I love this comparison. I've finally been able after many years of trial and error to make good pie crust. My tried and true one is from the Chickens in the Road site, Foolproof Pie Crust. This one makes four pie crusts and is perfect for holidays; you can put them in the freezer and be ahead. I also make the basic Crisco pie crust and again, put it in the freezer before using. The big trick I learned from KAF is to use less liquid than you think you need! Give the crust time in the fridge or freezer to hydrate, and you'll have flaky results every time.
What about making good old fashioned ginger snaps. Will butter make them snappy or shorting be a better option. I have noticed that store bought ginger snaps use shorting but perhaps the reason is shorting has a longer shelf life over butter?
Hi Clay, in our recipe for Gingersnaps, we call for vegetable shortening as opposed to butter. It makes the cookies crisp and slightly snappy--if you use butter, they'll be slightly more puffy, cakey, and softer. For a truly snappy Gingersnap, try using 1/2 teaspoon Baker's Ammonia instead of the baking powder. It's the secret to making cookies as crisp as those found at the store. Happy baking! Kye@KAF
Awesome post. I’m a regular visitor of your site and appreciate you taking the time to maintain the excellent site. I’ll be a frequent visitor for a really long time. https://storify.com/Stephens86Wichm/master-universitario-en-fisioterapia-del-deporte-y
It's 2016...I've read all the comments. I'm an RN of 30 years experience ,from a family of Master Chefs and Bakers. PLEASE. ..stop using CISCO and shortening in your foods..Shame on you for advocating this..be Heart and Head smart. A heart attack or stroke is harder to swallow than crumbling crusts. !!!!
May, rather than recommending one ingredient over another, our intention here was the explore the unique qualities of both of these fats in a multitude of recipes. We focus on the differences between these two ingredients in baking without examining the relative health benefits of each. As always, we encourage bakers to make food choices they feel most comfortable with and to consult a doctor or nutritionist for advice. Kye@KAF