Massachusetts: Powdered-sugar Hostess Donettes, nestled a slightly sticky six to a plastic sleeve. They tided me over many a late afternoon between the end of high school track practice and dinner – an agonizing 45 minutes spent bouncing home over pot-holed roads in the back of a school bus. 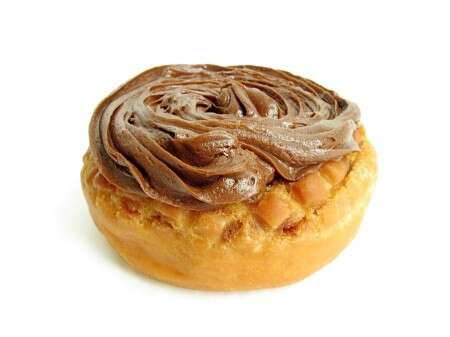 Churros, mildly crunchy, tender sticks of fried dough, are a typical breakfast treat in many Hispanic countries. I'd seen packaged churros in stores; and even been tempted by the leaden-looking wands in the local club store's snack bar. But they just never had that fresh-fried allure, the come-hither look that spawns a reckless attitude in its willing victim.

Shaped in a ring, this type of doughnut is similar to a French cruller; in fact, Dunkin' Donuts carries them. But the proportion of crisp outside to soft inside leans heavily towards crust in a churro, making it the perfect vehicle for coffee, or hot chocolate – which is what churros are served alongside in their native Spain. 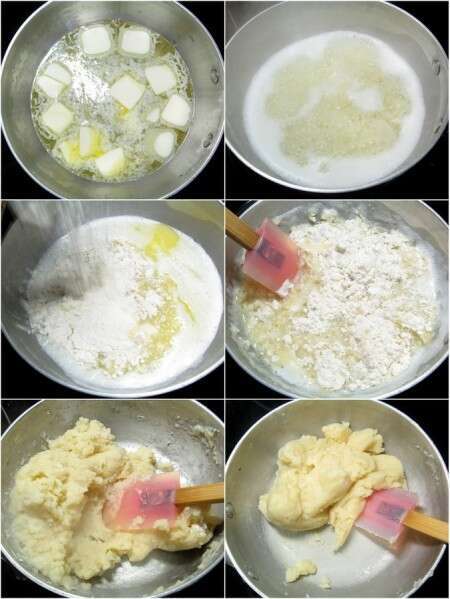 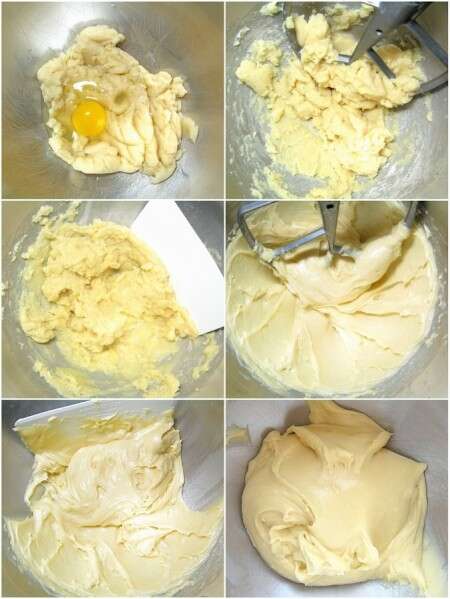 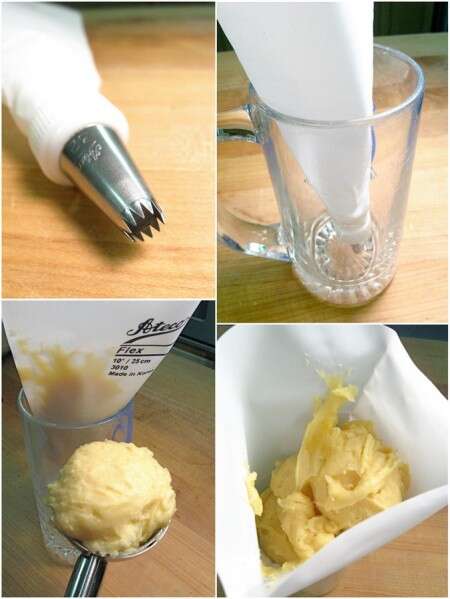 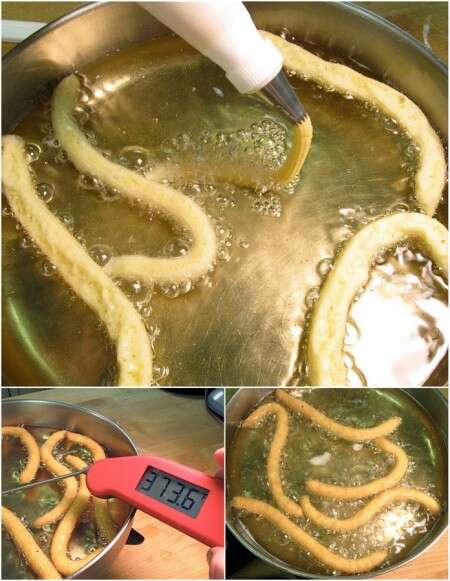 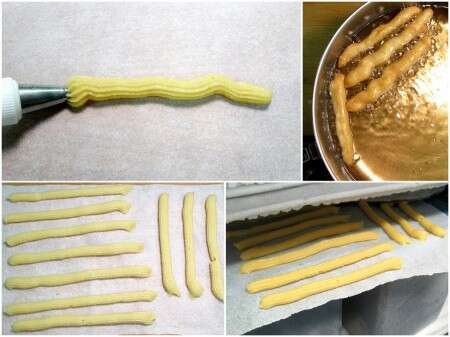 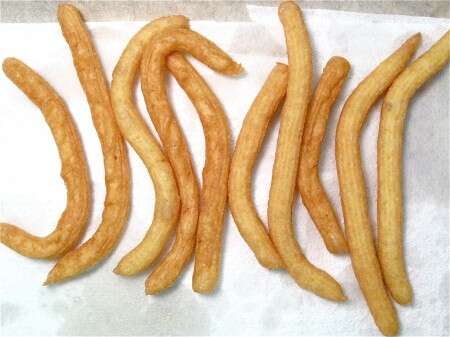 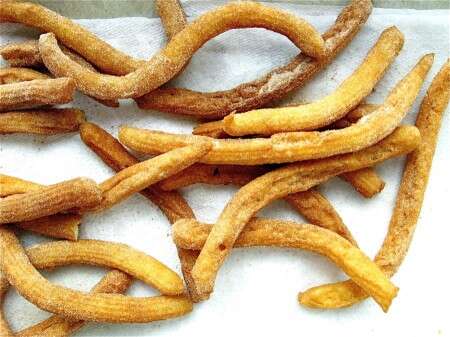 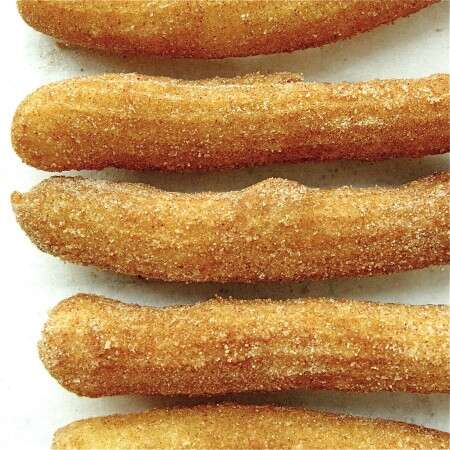 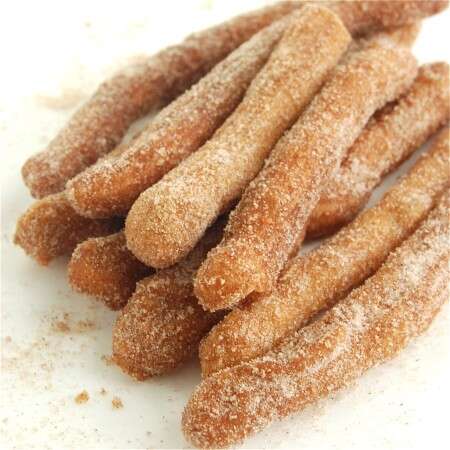 Just a general comment to say how much I appreciate and enjoy PJ Hamel's blogs!

There are two thinks to change to this recipe. The first is to use either a 5 or 6 points star tip. The second is to pour the dough directly to fry in the oil The stores that make churros, usually form a large spiral, then they cut the churros, for home you can make small "straight" lines, depending on the size of where you fry them. any size between 15-25 cm (6-10 in) is fine.
My mother made "crullers" (pronounced kruller) when we were kids. Not the same thing I think. They were cake like donuts with cinnemon sugar coating. They were sort of squiggle shaped. I think with heavy enough batter to just squeeze it between your fingers for fun worm like shapes. We loved them. I don't know if it was a passed down recipe or if she read them in a cookbook. Possibly the former. Our family was along the Delaware since colonial times. We also used left over pie dough to make little cinnemon sugar and butter cookies by rolling up the dough with the later ingredients inside. Well you can't go wrong with butter, flour and sugar a dear old lady friend once said. But thought I'd point out that crullers or krullers are slightly different.
Why do mine keep coming out chewy? im trying to make them for my class and they pretty hard.
If your churros are coming out chewy, it is likely you are over-mixing the batter or using a flour with too high of a protein content. Be sure you are using all purpose flour, or you are welcome to try using pastry flour blend to make up about half of the flour in this recipe if you wish. It will give you a more tender dough; if you do this, hold back just slightly on the liquid. Good luck and happy baking! Kye@KAF
Ooh! Just saw this linking back to my site! Yours came out butlaifuley! You baked them? I think I have to try that! Frying the churros makes them more airy, but I think custardy might be interesting... Great post! And thanks for linking back to me! :)
I made the batter, piped on parchment a week ahead of Christmas and froze them. The day before Christmas I friend them all refroze them. Christmas evening I heated them up in a 350 oven for exactly 10 minutes and put them in the cinnamon sugar. Plated them with some ganache that was heated slightly and some whipped cream. They were perfect! After eating three courses, people were coming back for a second saying they were the best dessert ever. The key is is make sure your oil is at 375.
Thanks for sharing your success story here - I love the idea of turning them into dessert with ganache and whipped cream. :) PJH
I worked for more than 35 years in East Los Angeles, where I could stop on the way into work and buy just made churros and a great cup of champurado (a hot Mexican drink of...and I swear it is delicious... chocolate and corn meal!) I have yet to find a good champurado recipe, but I will be trying these churros.
That does sound good - like a hot equivalent to horchata, the Mexican drink made with ground rice and fruit juice... Thanks for sharing - enjoy the churros! PJH