What is pâte à choux? Why we love this versatile French dough

It may seem intimidating, but it’s simple to make and even easier to eat.

The first time I made pâte à choux, I thought something was terribly wrong. As I added eggs to my dough while the stand mixer whirled, the mixture turned into a broken, slimy mass. I frantically searched the recipe to identify where I had gone wrong.

As I fretted, the mixer continued to spin, and after several agonizing minutes, that ugly mess somehow transformed into something smooth, shiny, and even beautiful. It baked into the most perfect little puffs I’d ever seen, and I ate them non-stop all week.

That’s when I fell in love.

What exactly is pâte à choux?

The dough is made from basic ingredients: flour, water, butter, salt, and eggs. But what starts as a webby, gluey dough transforms in the heat of the oven, thanks to the power of steam. When baked, pâte à choux puffs dramatically, expanding into a craggy pastry that’s crunchy and crispy on the outside and full of air on the inside.

How do you make pâte à choux?

Though slightly unconventional (it starts on the stove!), the process for making pâte à choux is incredibly simple. It’s mostly a dump-and-stir situation, making it one of the easier doughs you’ll ever make.

To make pâte à choux, you bring water, butter, and salt to a boil in a saucepan. (Sometimes milk is called for in place of water.) You add flour to that boiling liquid and cook over medium heat for a few minutes until some of the moisture cooks out. You’ll know it’s ready once the dough pulls away from the side of the pan and there’s a thin, floury film on the bottom of the pan. It’s a step similar to tangzhong in bread baking: It pre-gelatinizes the starches in flour, allowing them to retain more moisture in the dough. This eventually leads to more steam in the oven, and thus more leavening in the baked pastry — aka, the “puff” in “cream puffs.”

Next, that dough gets added to the bowl of a stand mixer, where it cools just long enough that you can add eggs without scrambling them from the heat. You’ll add a lot of eggs — 4, to be exact, for just 1 1/4 cups (150g) flour. That’s because eggs are the backbone of this dough — they provide structure to the dough, allowing it to capture all the air created by the rapidly evaporating steam that develops during baking.

Start your mixer running, then add the eggs one at a time. This is where it can start to look like a disaster, and the moment I described earlier. But anyone who has made pâte à choux knows this messy stage is perfectly normal. At first, the mixture will break and slop around — that’s OK. Keep adding the eggs, and once they’re all in there, continue to run your mixer until you have a smooth, glossy mass.

It’s a unique consistency — you could dollop it into mounds like whipped cream, or pipe it into circles or ovals. That’s part of what makes this dough so versatile: It can be shaped however you need it.

Once the choux hits the oven, magic happens. The heat is cranked up to 425°F — in the high heat, the large amount of liquid in the dough quickly turns into steam in the first 15 minutes or so of baking, causing the pastry to puff dramatically. After that initial burst, the heat is reduced to 350°F so the egg-based structure can set and capture the large amount of air created by the steam without browning too much.

The key is to start dry and stay dry

Despite the large amount of moisture in the dough, cream puffs and other baked choux pastry are meant to be completely dry. As Paula Figoni notes in How Baking Works, “If side walls are even slightly moist, they will be weak. When the shells are removed from the oven, steam condenses back to water, taking up less space, and still-wet walls recoil. When this happens, shells shrink and collapse.” To ensure your pastry is perfect, Figoni recommends that you don’t rely just on color to determine if shells are done baking. “Instead, remove a test shell from the oven, break it open, and check that it is dry. If it is dry and does not collapse, then it is safe to remove the entire batch from the oven.”

There’s another trick to help with drying. Our Cream Puff recipe directs bakers to remove the baked pastries from the oven, then make a small slit in the top of each before returning to the oven for 5 more minutes. This slit allows the steam to escape, encouraging further drying. Once baked, you can split each puff in half to make top and bottom pieces; splitting and exposing the centers to air will help keep them from becoming soggy.

After being so careful to bake perfectly crispy pastry shells, you want them to retain that texture as much as possible. The problem is that most choux pastry fillings (more on this below!) are wet, like whipped cream or pastry cream. As a result, wait to fill desserts like cream puffs and éclairs until shortly before serving. If you fill them early and let them sit for too long, the pastry shell can soften and lose its enticing crispiness.

What can I make with pâte à choux?

Pâte à choux is the foundation for so many wonderful baked goods, both classic and unconventional.

Piped or dolloped into small circles, it puffs up into adorable Cream Puffs. Fill them with whipped cream, as is classic (infuse that cream for more flavor!) or use ice cream instead to make profiteroles. For another spin, you can add a crunchy topping to make Craquelin Cream Puffs, or garnish with pearl sugar to make Chouquettes.

If you add grated cheese (our preference is Gruyère) you can turn pâte à choux into savory Gougères; with masa harina and spices added too, you can make Spicy Cheese Puffs. And if you pipe into a log shape instead, you can turn the baked pastry into Éclairs — fill with pastry cream and add a chocolate glaze.

But wait, there’s more: In this classic Kringle, pâte à choux is piped over a buttery base to make a crispy puffed layer beneath a garnish of caramel and glaze. Paris-Brest, meanwhile, is made by splitting a large ring of baked choux and filling it with cream. Or skip the baking altogether, and fry your choux to make Classic Crullers.

And for something truly special, you can make this Chocolate and Strawberry Cream Puff Cake, which features a hidden bounty of strawberry-filled choux puffs inside an elegant chocolate mousse.

Can I make pâte à choux ahead of time?

Versatility isn’t the only thing that makes this dough handy — it can also be frozen and saved for later use. You can freeze it piped and ready-to-bake, then bake it frozen straight from the freezer. Or freeze choux pastries after baking, tightly wrapped; to serve, remove while still frozen, spread in a single layer on a baking sheet and pop in a hot (around 400ºF) oven for a few minutes until thawed and crisp.

If you’re prepping for a big event or holiday baking, a freezer full of choux can help set you up for future appetizers and desserts all month long — with a bag of frozen gougères, for instance, you’re always minutes away from a warm, cheesy snack. 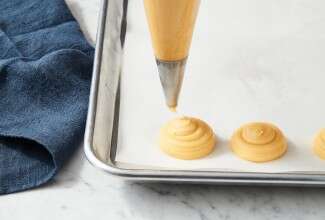 Can pastry dough be made with gluten free flour?

My Mom has made an old recipe from the Betty Crocker cookbook for years called Danish Puff. It's pâte à choux formed into two logs and allowed to bake and fall. Then you apply frosting and decorate it with nuts, colored sugar or whatever and slice into strips. So easy and yummy.

This blog is excellent. I said that, Pâte à choux is a classic French dough that's used to make a wide range of pastries, from cream puffs to éclairs to cheesy gougères and more. Choux (pronounced like “shoe”) means cabbages in French; the baked puffs resemble small cabbages.