For a long time, there simply wasn’t a substitute for egg whites in vegan baking. After all, what else could be whipped up to stiff, airy peaks and folded into pancakes or baked into meringues? The dream of egg-free pavlovas or vegan marshmallow spread seemed elusive.

Then along came aquafaba, and everything changed.

If you’re not familiar, aquafaba is the viscous liquid left over when you drain a can of chickpeas. And magically, it acts almost like egg whites when used in baking, including being whipped into meringue. Use the aquafaba from canned chickpeas, rather than saving the liquid from chickpeas you’ve cooked yourself, as the homemade version can be much less reliable (and you always want to be exact when it comes to baking!). Simply pop open a can and drain out the excess liquid to use, being careful that no chickpeas sneak in there too. Set aside the chickpeas for another use (maybe make some hummus?), then get baking.

If you're opening a can of chickpeas and want to reserve the aquafaba for future use, you can also freeze the liquid in an ice tray, then save the frozen chunks in a plastic bag to thaw and use whenever you need.

How to substitute aquafaba for egg whites

You can sub the liquid aquafaba for egg whites in a recipe, or — and this is much cooler — whip it up the same way you would egg whites, either with sugar or without. Though this substitution has been around for years, the science still isn't exactly clear on why this process works. But as long as the results are there, why ask questions? 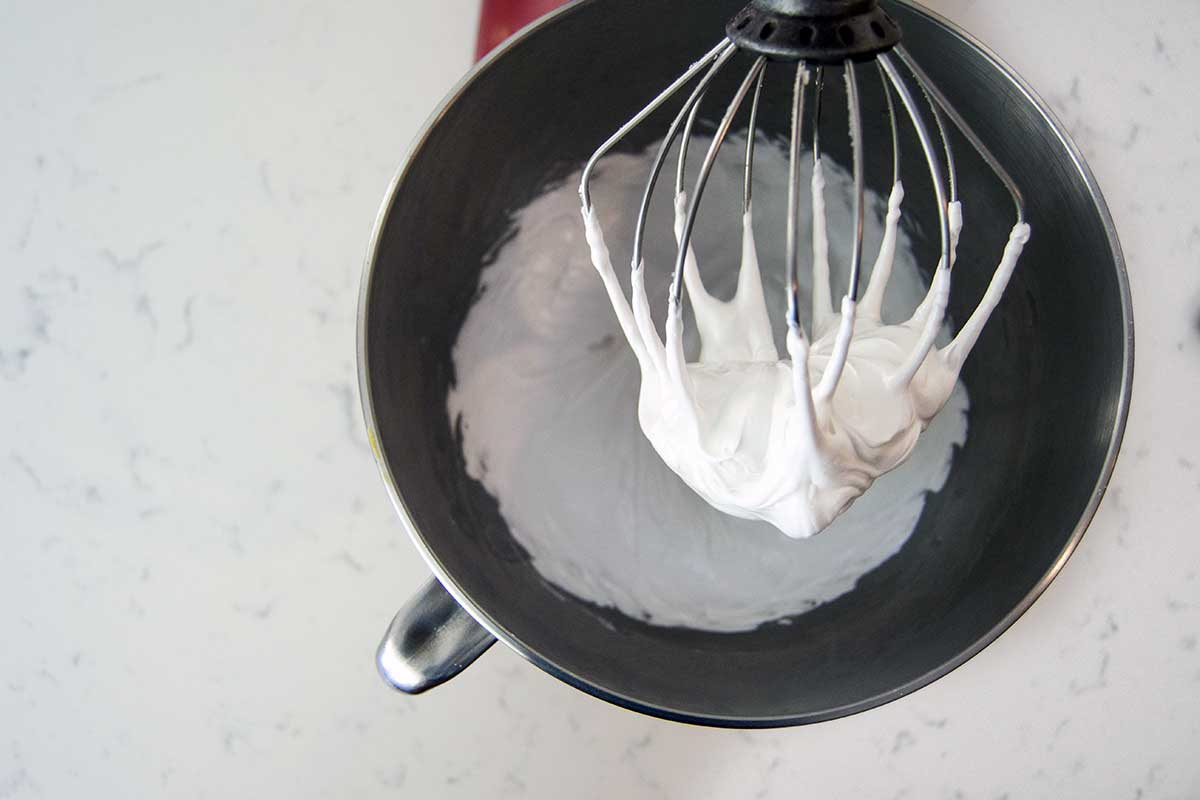 When it comes to substituting in recipes, 2 tablespoons of aquafaba is equivalent to about 1 egg white.

Note: If you're looking for a full egg replacement, read our post on how to make homemade egg replacer.

Can I use the liquid from other beans?

Some people have had success with using the leftover liquid from other types of white beans, such as cannellini beans. However, we recommend sticking to chickpeas, as this works best. And we definitely suggest staying away from very dark beans like kidney or black beans — the results are (quite literally) not pretty! 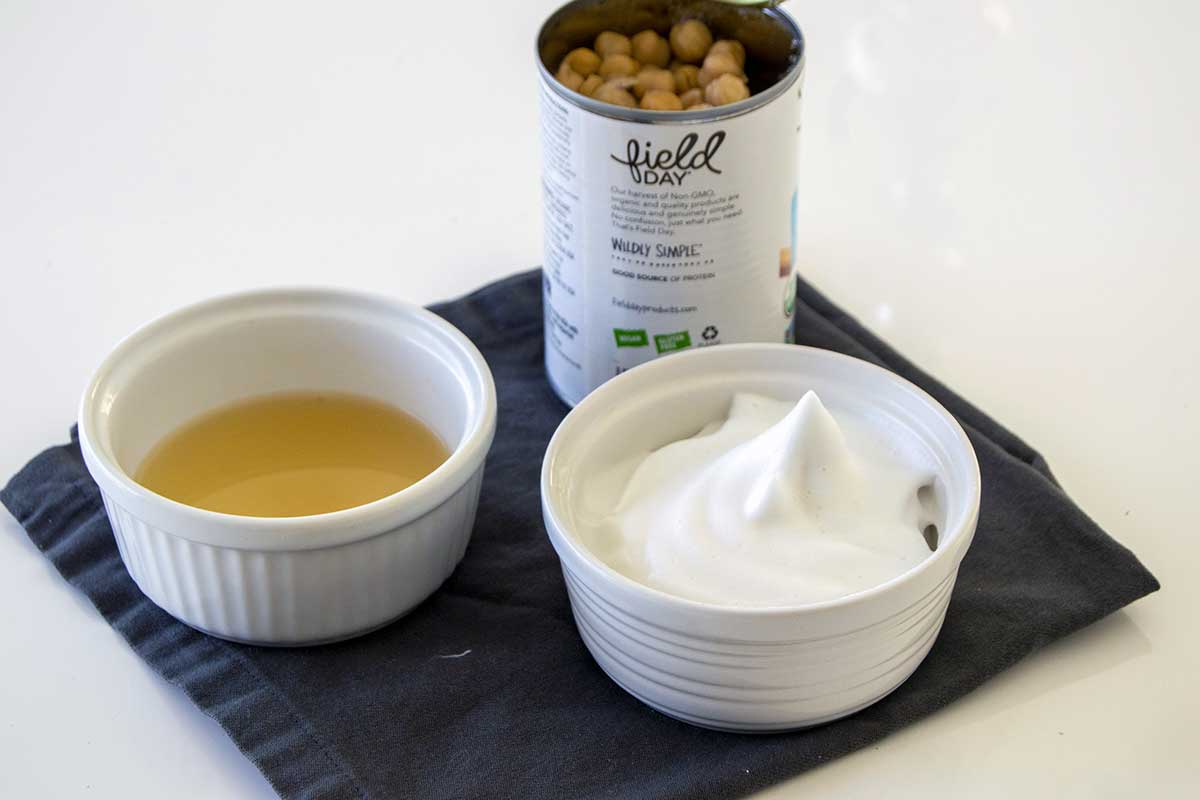 How to whip aquafaba

While the process of whipping aquafaba doesn’t differ too much from egg whites (check out our meringue rules for a refresher), there are a few important points to keep in mind for success:

Take your time. Though the end products are similar, aquafaba typically takes longer to whip to peaks than egg whites. So plan accordingly, and if your aquafaba meringue is taking longer to whip than a recipe dictates, don’t be alarmed. If it starts to take more than 10 to 15 minutes to whip up, however, you might want to abandon this batch and try again, perhaps with another can.

Check the viscosity. Before whipping, your aquafaba should be about the same viscosity as egg whites after they've been lightly whisked, perhaps slightly thinner. Some cans may differ, though, so if your aquafaba is excessively watery, you can reduce the liquid slightly on the stove until it thickens, then let cool before whipping.

Amp up the power. Just like egg whites, you’ll need to use an electric mixer — either a stand or hand model — to get your aquafaba beaten to stiff peaks. You simply won’t be able to achieve the same results by hand.

Consider the flavor. There’s no way around it — aquafaba can taste like beans. To ensure your meringues or pavlovas don’t taste savory, make sure to incorporate flavorings like vanilla or almond extract. You may even want to add a little more than a recipe calls for to ensure the aquafaba flavor doesn’t shine through. Give the whipped aquafaba a taste (a benefit of not baking with raw eggs!), and use your instincts to add another splash of vanilla as needed. 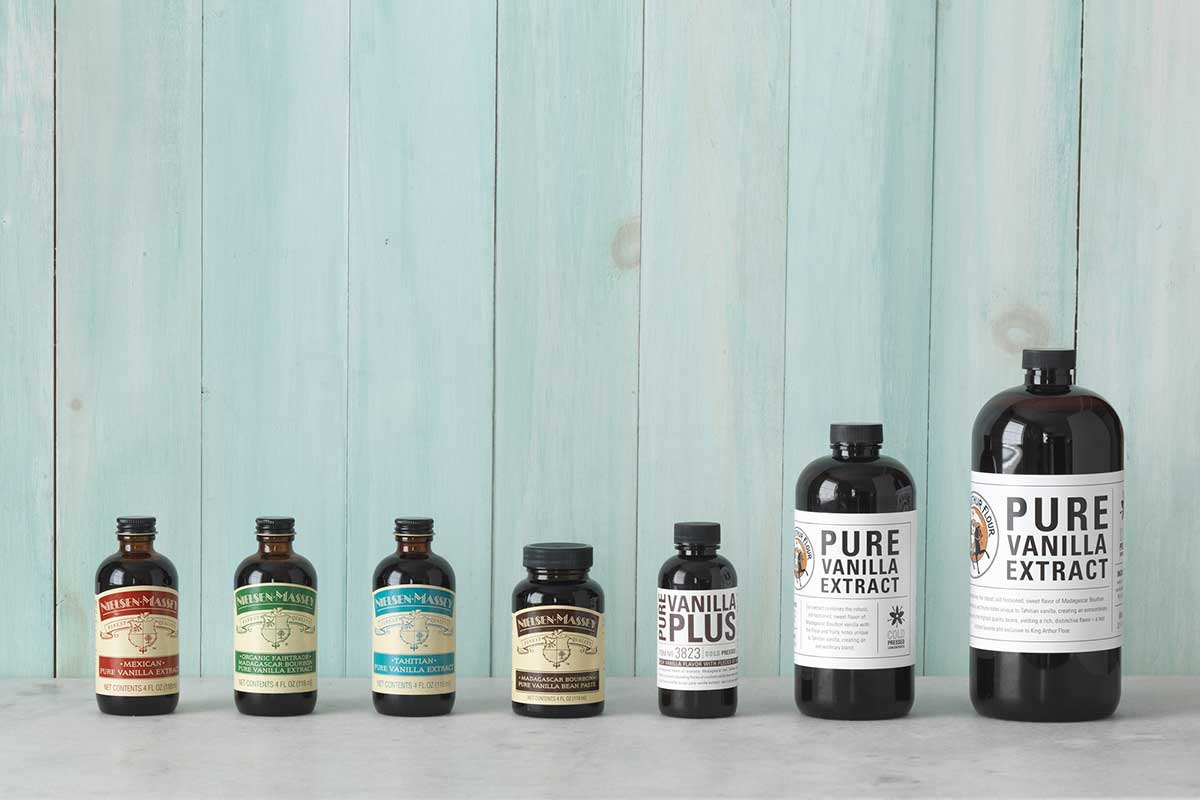 When it comes to baking with aquafaba, I've had success using 2 tablespoons aquafaba + 1/8 teaspoon cream of tartar + 1/4 teaspoon vanilla extract in substitution for 1 egg white. You can customize this formula based on your tastes and the recipe you're using (if the recipe already has cream of tartar, for instance, you're all set!) but this is a helpful baseline to start with.

How to use it

You can use aquafaba as a replacement for egg whites in many recipes, which is incredibly helpful for vegan baking. But this substitution is not foolproof. Since it isn’t always successful, I experimented with some recipes to see where it’s best to use aquafaba, and when to keep the chickpea can in the cupboard.

Meringues: As wild as it is, aquafaba makes the same kind of crispy, crunchy, sweet meringue you would expect from regular egg whites. Use it to make Meringue Kisses for an airy and delightful vegan treat that’s hard to distinguish from the classic version. Since this recipe is basically just aquafaba and sugar, make sure to beat in flavorings like vanilla extract once your mixture is stiff and glossy to mask any lingering bean-y taste. 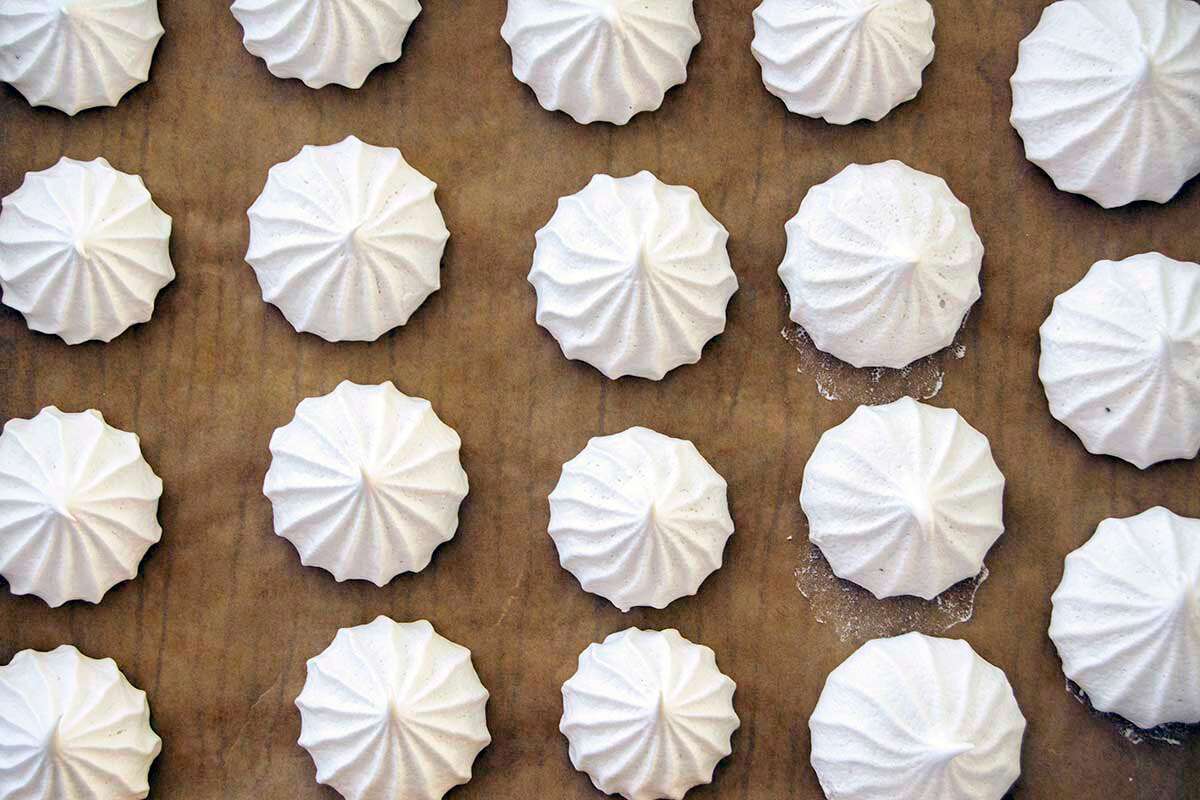 And instead of piping the meringue into individual cookies, you can make vegan Pavlova by spreading it into a single circle, baking to a crisp, and topping with coconut whipped cream and fruit.

Marshmallow spread: Just like with meringue, aquafaba can be whipped up into silky, billowy vegan Marshmallow Spread that holds its shape and spreads as easily as the real thing. Like with all aquafaba recipes, it’ll take a little longer to whip into shape, but the end result is definitely worth the time. 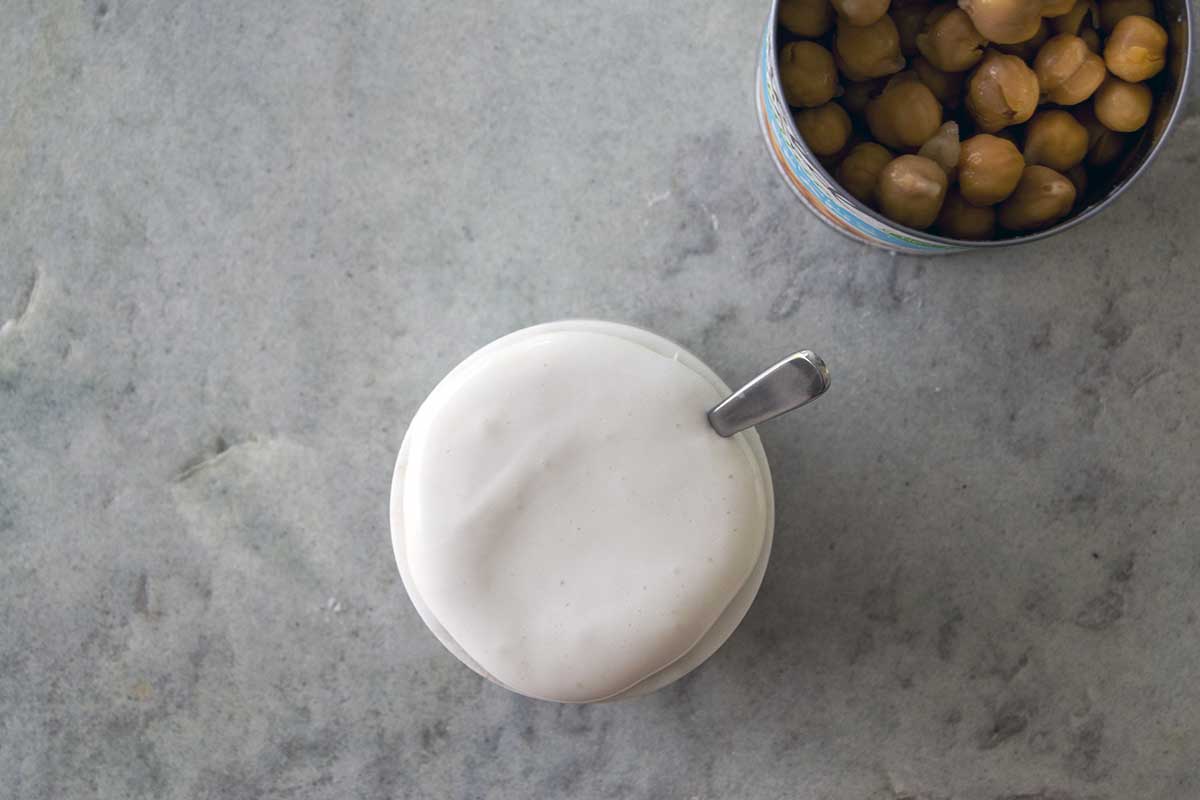 Pancakes: One way to achieve fluffier pancakes is to fold in whipped egg whites. So is the same true for aquafaba? When experimenting, folding whipped aquafaba into my pancakes did result in a lighter, fluffier texture, though because the aquafaba wasn't quite as strong as egg whites, the pancakes were fairly delicate. Still, this technique is certainly worth trying out with your favorite vegan pancake batter.

Cookies: Uh-oh! I tried using aquafaba as a vegan substitute for egg whites in Flourless Fudge Cookies, and the results were ... not good. Instead of shiny, crackling cookie tops like in the egg white version, the aquafaba cookies spread into a thin, sticky mess.

I also got similar results when subbing aquafaba for egg whites in Almond Cloud Cookies, and my results for Macarons and Amaretti were somewhat lackluster. My suggestion: If you’re looking for vegan cookies, try our Vegan Chocolate Chip Cookies instead.

Angel food cake: Another bummer. Angel food cake relies almost entirely on whipped egg whites for structure and lift, and subbing in aquafaba instead just didn't cut it. Rather than baking into a light, puffy cloud of cake, my aquafaba angel food cake disintegrated into a sad puddle of melted cake goo in the heat of the oven. I later had similar disappointments with Chiffon Cake. Even though it whips up into stiff peaks, aquafaba just doesn't seem stable enough to support an entire cake. For now, stick to Vanilla Cake Pan Cake for your vegan cake needs.

Bonus! Swiss buttercream: Though it's not vegan (and therefore likely not very relevant), it's worth noting that aquafaba also makes for an excellently rich and billowing Swiss Buttercream. If you'd like an entirely vegan frosting, try substituting vegan butter (our test kitchen likes Earth Balance).

Aquafaba works well on its own (meringues), in non-baked recipes (marshmallow spread), and in recipes that don't rely on egg whites for a ton of structure (pancakes). However, the substitution simply doesn’t hold up well when it comes to certain cakes, cookies, and other recipes that lean heavily on egg whites. Nevertheless, it's still an extremely versatile, unique ingredient that opens up a whole new side of vegan baking.

For more vegan baking inspiration, check out our Vegan Desserts recipe collection for everything from chocolate chip cookies to citrusy clementine cupcakes.

This is full of great information - thank you! Question: How long will aquafaba keep after it's whipped? Could it be kept in the fridge and used over a few days, or is it a "use immediately" kind of thing?

Hi Cynthia, it can typically be stored in the fridge for up to 5 days. The foam will begin to deflate over time but you can re-whip it when ready to use. Happy Baking! -Maranda@KA

Is there any modification if using aquafaba to substitute for whole eggs instead of just the egg whites?

Will a vegan frosting/icing made with aquafaba hold up in heat? Looking for a vegan frosting that isn't going to melt in my 85 degree house, and doesn't taste like you've added 70lbs of sugar.

Hi Kit. Unfortunately, there are not many frostings that we can think of that are meant to be stable for long periods of time at 85°F. For bakers looking to have a frosting that is somewhat stable at high heat, it is commonly suggested to use vegetable shortening in place of any butter (vegan or dairy based), this will still require a fair amount of fat to keep the frosting from melting.

I assume that you should use beans with no salt added, since the bean liquid in regular beans is quite salty. Is this correct?

Hi there, Gina! We haven't found that to be necessary but if you're worried about the impact it might have on your final baked good, you're more than welcome to go with a no-added salt option. Happy baking!

Can you substitute Splenda for the sugar?

Hi, Saskia! That's not something we've tried in our test kitchen, unfortunately, but do feel free to experiment! We'd be quite interested in hearing about your results.

These floral, flavorful “goddess cookies” are a vegan delight