Every year since opening a pie shop, I get asked the same question before Thanksgiving: “How do I veganize my aunt’s spiced pecan / classic apple / chocolate silk / traditional pumpkin pie recipe?!”

The good news: Some classic Thanksgiving pies (we’re looking at you, apple) already have vegan fillings, and the only swap needed is a vegan pie crust. That’s a pretty straightforward adjustment, and one I’ve considered for you. The solution is this perfect buttery, flaky, they-won’t-know-it’s-vegan crust recipe. Fill that crust with some well-seasoned apples, maybe add a pear and a glug of bourbon, omit the butter in the filling or substitute with plant-based butter, bake until golden and bubbling, and there you have it: the best vegan apple pie you’ve ever tasted.

Making a vegan pumpkin or pecan pie, however, is a bit more involved than simply switching the butter in the crust. That’s because both the mouthfeel and flavor of these pies lean heavily on the power of eggs. Yolks provide richness from fat, which creates a silky texture in the custard. Egg whites provide moisture but most importantly protein, which creates the structure of the filling and ensures a pretty slice. And for a classic pie like chocolate cream pie, the challenge is right there in the name: How do you make a cream pie without the cream?

Lucky for you, I’ve done all the work of testing some great (and some not-so-great) vegan ingredient swaps in search of the perfect vegan version of these three classic pies.

In pecan pie, melted butter, sugar, and (typically) corn syrup are mixed with eggs, then baked to create the ooey-gooey filling that fans of the pie love. The sweet and jiggly sugar custard is offset by crunchy toasted pecans, adding a savory counterpart to the very sweet filling. When eggs are removed from the recipe, we not only lose the magic of the egg protein, but we also lose the eggs’ unctuousness.

Egg replacements often take one of three routes: starchy fruit like banana or pumpkin purée, ground flax seeds, or cornstarch. Although banana-pecan custard pie sounds great to me, Thanksgiving is no place to debut that experiment. I tested a few recipes using flax eggs and found the flavor and appearance of ground flax in the custard to be too obtrusive.

So on to the third option, which proved the best: a cornstarch slurry in place of eggs. This gave the filling its classic gooeyness, but the flavor was lacking some punch and roundness, so I bolstered the buttery pecan flavor with bourbon and used coconut cream to replace the butter. I added a bit of spice to cut through the sweetness of agave (traditionally corn syrup is used, and although it is vegan, I find the flavor to be one-note and prefer agave or golden cane syrup) and brown sugar, and a heavy dose of salt for balance. And to take things over the top, I added some dark chocolate (which I say is optional, but is chocolate ever really optional?).

The result is an ooey-gooey, sweet-and-salty, buttery, crispy Vegan Pecan Pie. Using cornstarch to set the filling works like a charm, but this pie will set quite firm in the fridge; the texture is best when served warm.

Tackling pumpkin pie was a bit easier, as pumpkin purée is wonderfully thick and doesn’t need much added to create a thick and silky custard. (Remember, it’s often used as an egg replacement anyway!)

As with the pecan pie, I found cornstarch to be the best replacement for the eggs, with an added bonus: I noticed that without eggs to set the filling, the pumpkin flavor was even more pronounced. I tested two versions of this pie with different amounts of cornstarch, and in the end found that the firmer version with a little more starch was preferred, especially as the pie aged over a few days.

I used sweetened condensed coconut milk as a replacement for the heavy cream that’s typically used in the filling, and it provided enough sweetness that I barely needed to add any additional sugar. All it needed was a touch of salt and a heavy dose of pumpkin pie spice, and this Vegan Pumpkin Pie was perfection: I found myself eating it warm, cold, and four days old — and loving every bite.

What’s better than an easy vegan swap in a recipe? A no-bake vegan swap! Your oven is probably full of Thanksgiving dinner anyway.

This Vegan No-Bake Chocolate Cream Pie will have you whipping up a dreamy dessert without worrying about oven space, thanks to my favorite time-saving ingredient: instant vanilla pudding mix. I’ve been experimenting with instant pudding mix to create egg-free pudding recipes at my bakery, both to save money and time, and the results have been fantastic. The method could not be simpler and requires little more than a saucepan for warming coconut cream. (I used a microwave-safe bowl and saved myself an extra dish.)

A great chocolate is a must here: I used 72% Guittard Santé baking chips. The vegan chips are sweetened with coconut sugar, which provides the perfectly balanced bittersweet note that a great chocolate cream pie should have. Another great vegan 72% chocolate would also work. (Heads up: At King Arthur, we only recommend products that we, as bakers, truly love. When you buy through external links on our site, we may earn an affiliate commission.)

The chocolate is melted in hot coconut cream, then cooled while the pudding mix gets blended with evaporated coconut milk and a small amount of vegan cream cheese for a tangy note. (While it sounds like a lot of coconut, the result is not coconutty at all; good quality chocolate is the dominant flavor.) Once mixed and poured into a prepared no-bake cookie crust and topped with barely sweet whipped coconut cream (or your favorite non-dairy topping), this pie is just a few hours in the fridge away from becoming your new favorite dessert. The texture is satisfyingly mousse-like in density, and the flavor is deeply chocolaty, bittersweet, and just as rich as any dairy version — and according to my friends and family, even better. 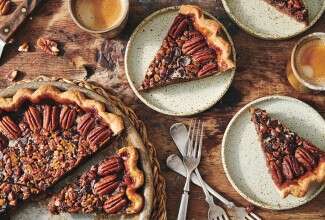 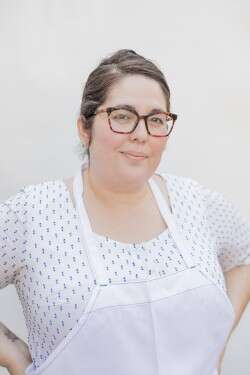 Nicole Rucker is a chef and author from Los Angeles. Formerly the pastry chef of the Gjelina Group (including G.T.A. and Gjusta), Rucker is known internationally for her rustic desserts and has won several awards for her homespun pies. In 2012, she won blue ribbons in the National Pie Championship, ...
View all by Nicole Rucker