We're excited to welcome pie artist and Pieometry author Lauren Ko to share her custom design for weaving a decorative quilted pie. Flex your creative skills and get your pie crusts ready!

As we head deeper into colder weather, the air turning crisper and leaves crunchier every day, I find myself tumbling headlong into hibernation mode. Heavy blankets, chunky knits, and woolen socks have been excavated from their boxes in the basement, and flannel has reinserted itself into its autumnal rotation.

But cozy doesn’t just stop with what I can burrow into! This interval between fall and winter — what I enthusiastically embrace as peak pie season — is the perfect time to liberally apply cozy to everything, pastry included.

Tuck a new quilt over your classic apple pie (or another pie of choice) and transform a traditional dessert into a stunning — and snuggly — rendition.

Start by making All-Butter Pie Crust. You’ll need three rounds of dough for this pie design, so you can either prepare a double batch of the recipe, stashing one of the four pie crusts it yields into the freezer for future pie adventures, or make one full batch and one half batch of the recipe.

You can also use your preferred pie crust recipe here — just make enough to have three rounds of dough ready for your pie. 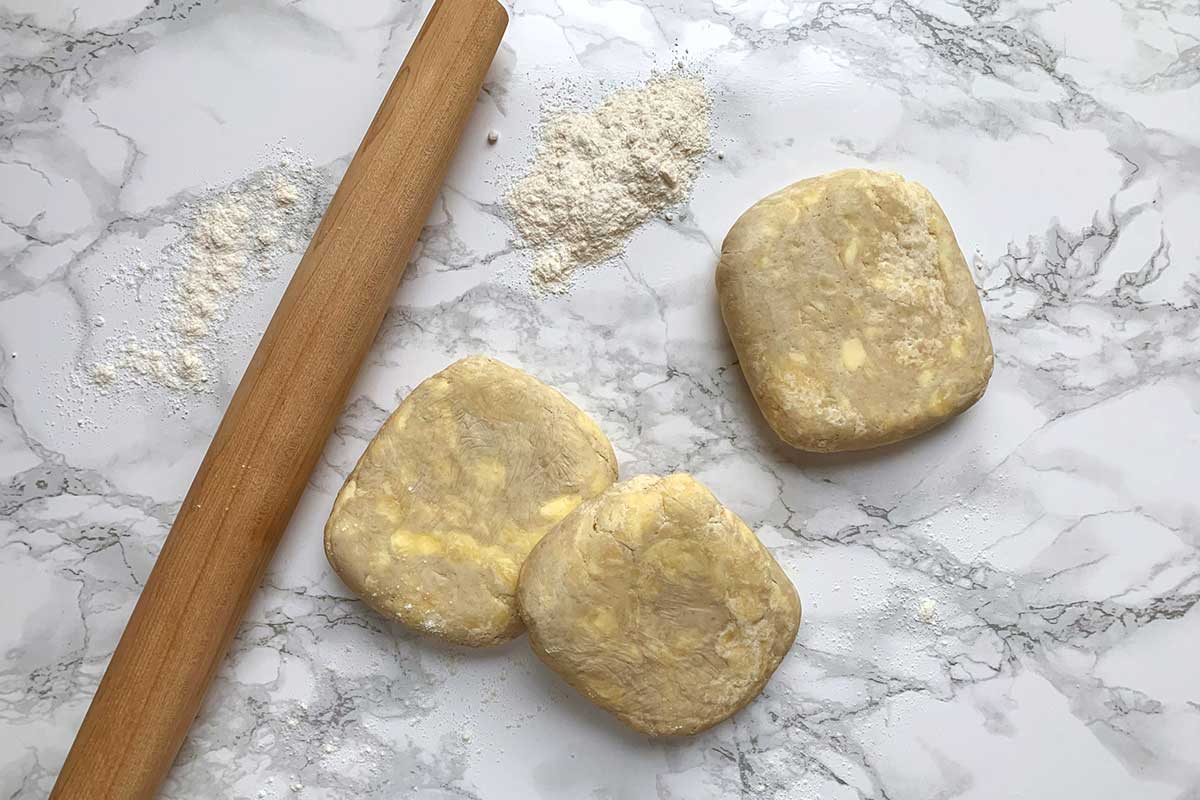 You’ll use one disk of crust as the bottom of your pie, and the other two disks for the topping. Go ahead and wrap the disk you’ll use as the bottom crust tightly in plastic and place it in the refrigerator while you prep the top design.

Roll one disk of pie dough into a 13" x 13" square and place it on a sheet of parchment paper. Slide the dough and parchment onto a baking sheet and place in the refrigerator to chill. Repeat this process with the second disk of dough. 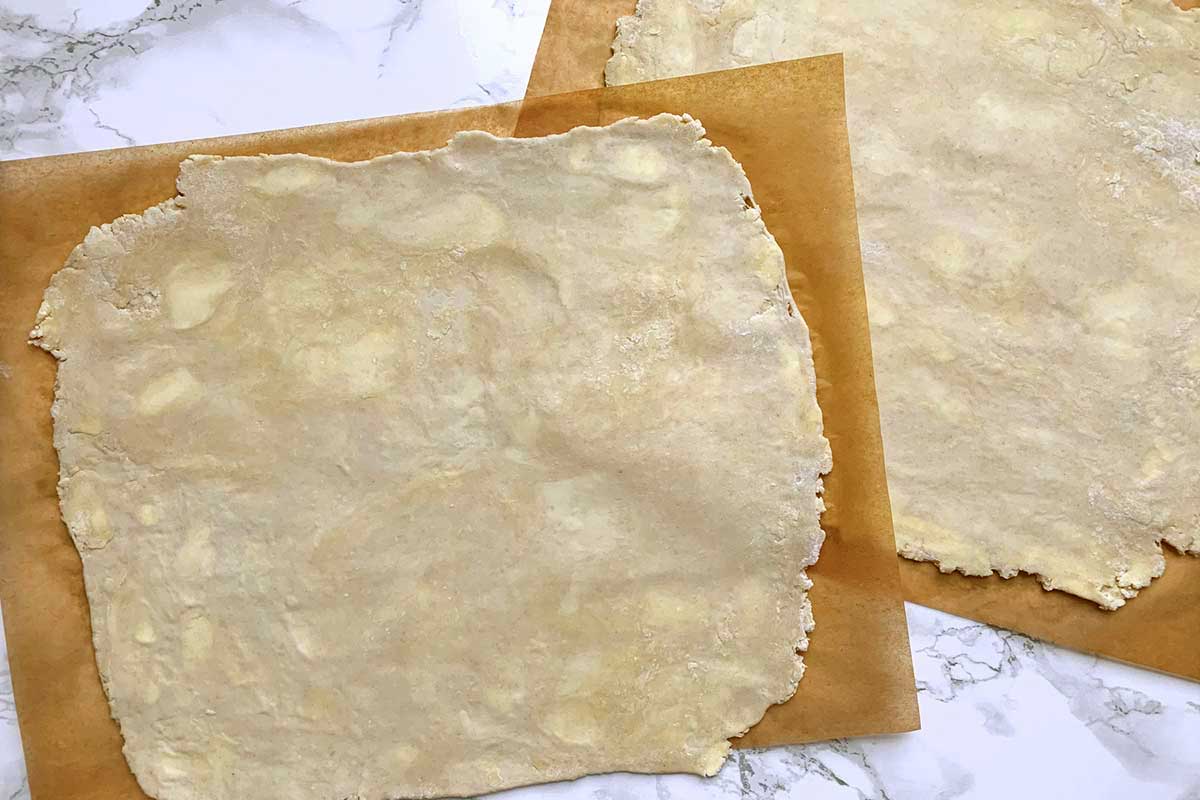 After about 5 minutes, remove the first sheet of dough from the refrigerator. Using a pastry roller or pizza wheel and a ruler as a straight edge, cut the dough into 1/4" to 1/2" strips, then do the same for the second sheet of rolled dough. The exact number of strips doesn’t matter.

If the dough feels a bit soft after cutting, slide the sheets of parchment paper back onto baking sheets and place them in the refrigerator for about 5 minutes to chill. 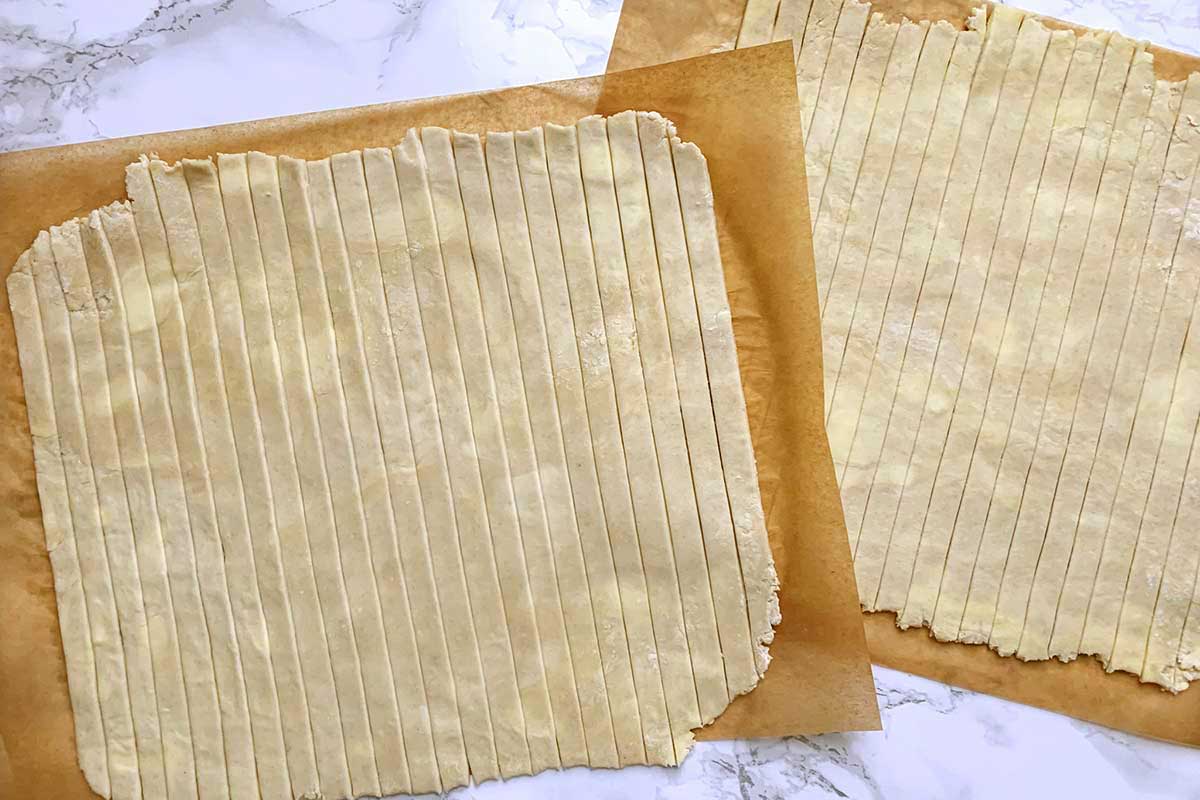 Remove the dough from the refrigerator and place one sheet of dough strips (still on the parchment paper) in front of you on your workspace, with the other sheet within reach. 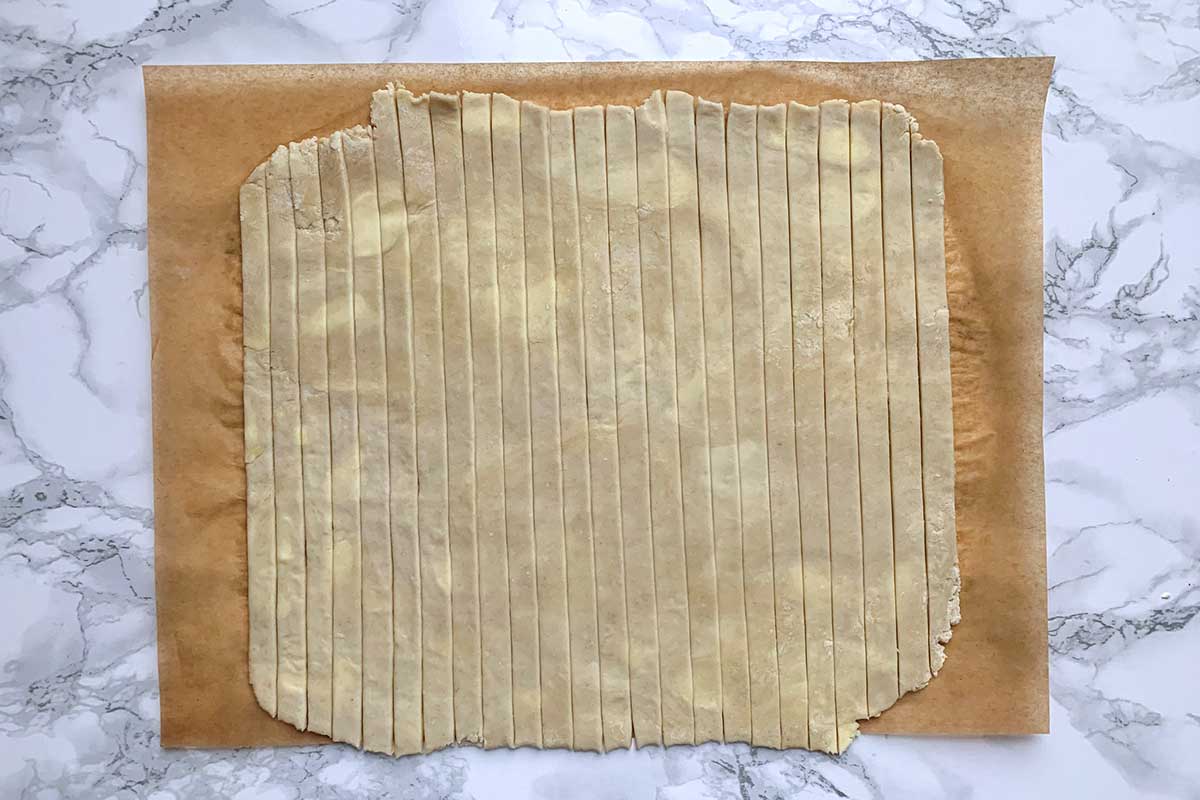 Lay one strip of dough from the second sheet horizontally across the middle of the first sheet of strips. From each quartet of folded-back strips, unfold the middle two strips. 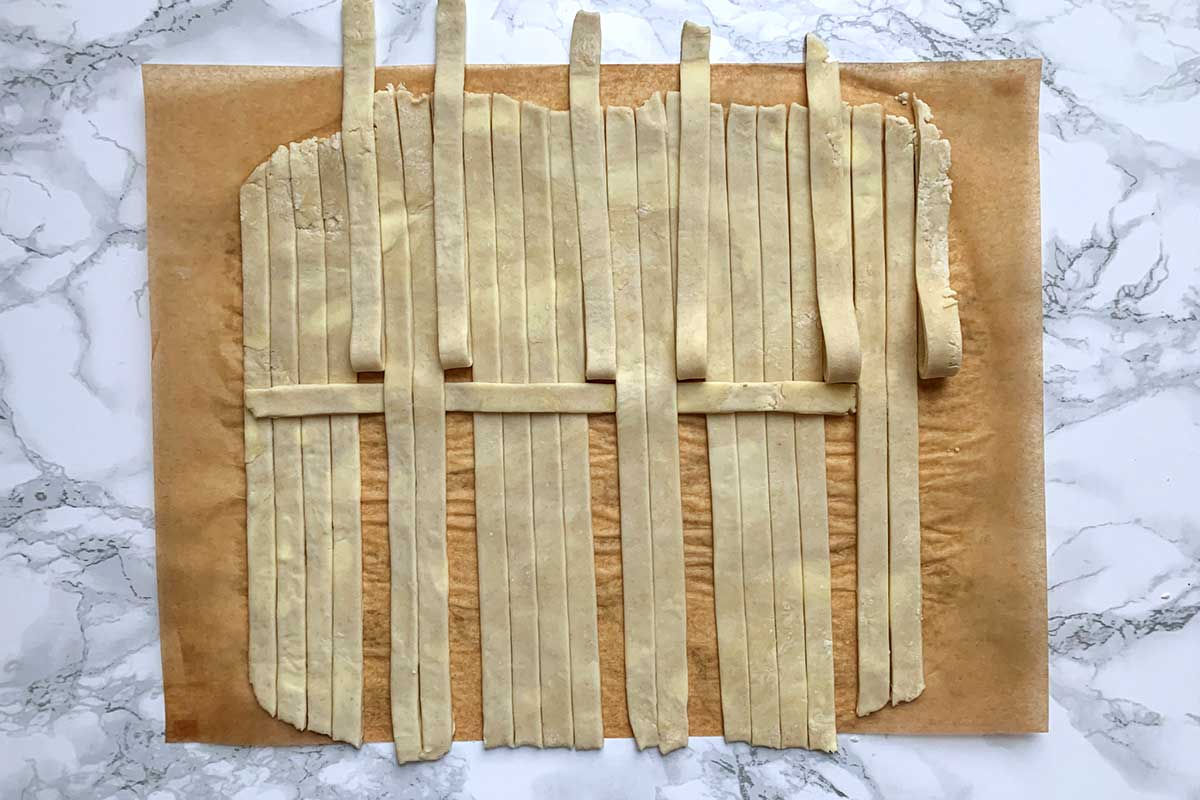 Take two strips from the second sheet of dough and lay them horizontally on the first sheet, nestling them closely to the first horizontal strip. Fold back the two vertical strips that were unfolded in the previous step, so that they're folded over the two strips you have just laid horizontally. 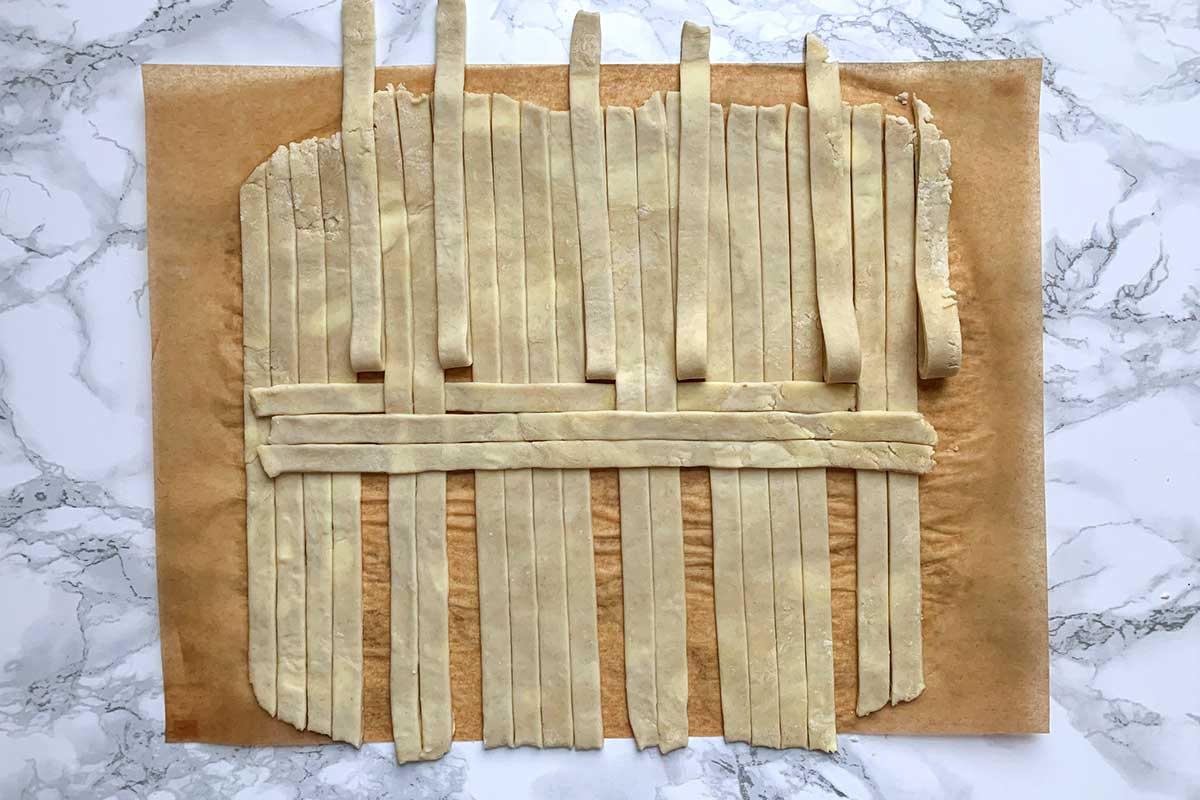 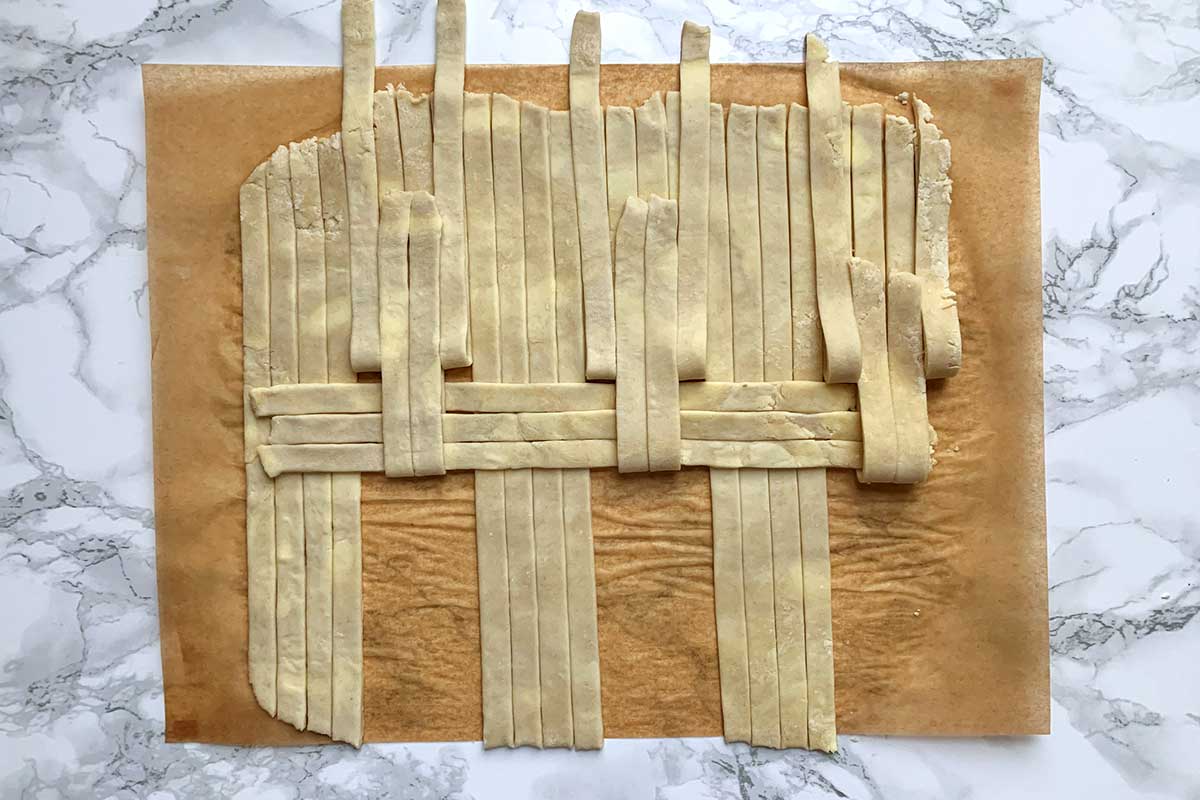 Take one strip from the second sheet of dough and lay it horizontally, fitting it closely with the previous horizontal strips. Now, unfold all the strips. 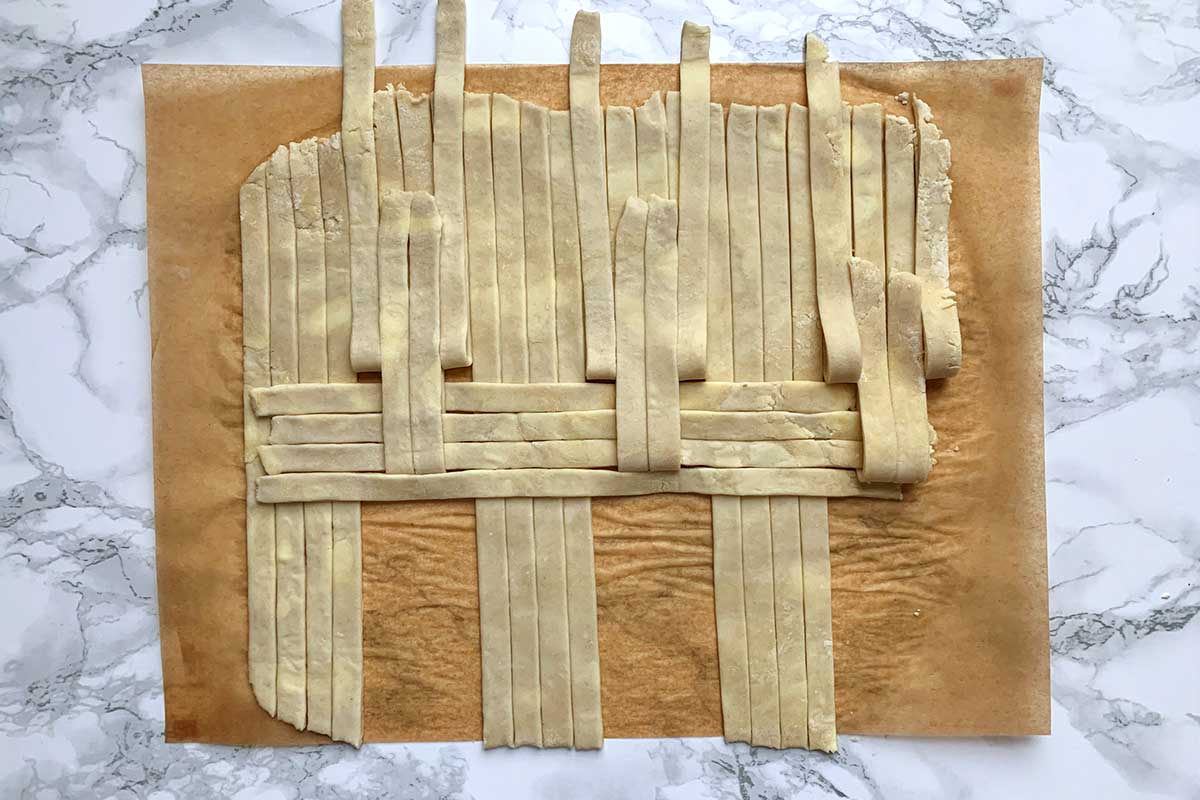 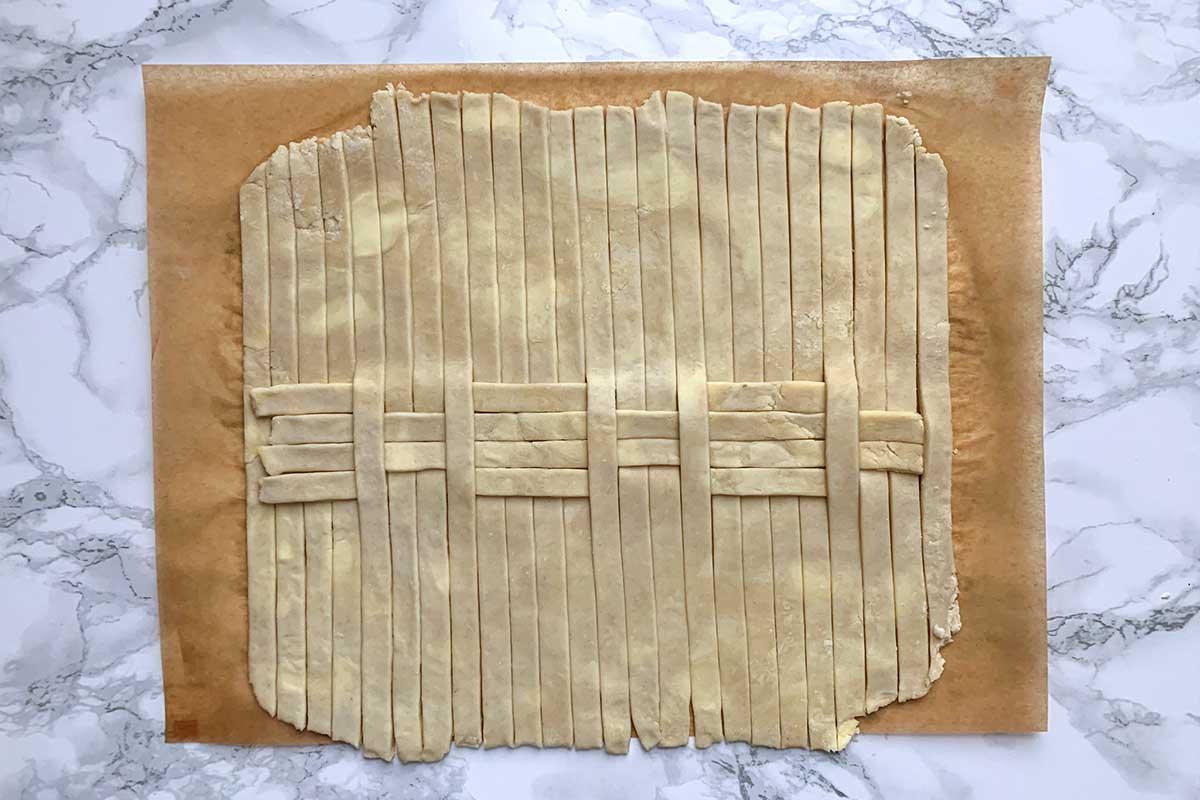 Repeat these steps to continue the pattern

Now you’ll essentially repeat this whole pattern again, starting by folding back the first quartet of strips this time. I'll walk you through it:

Beginning again from the left, fold back the first four strips of dough, leaving the following four alone. Then fold back the next four and so on until you reach the end of the sheet. 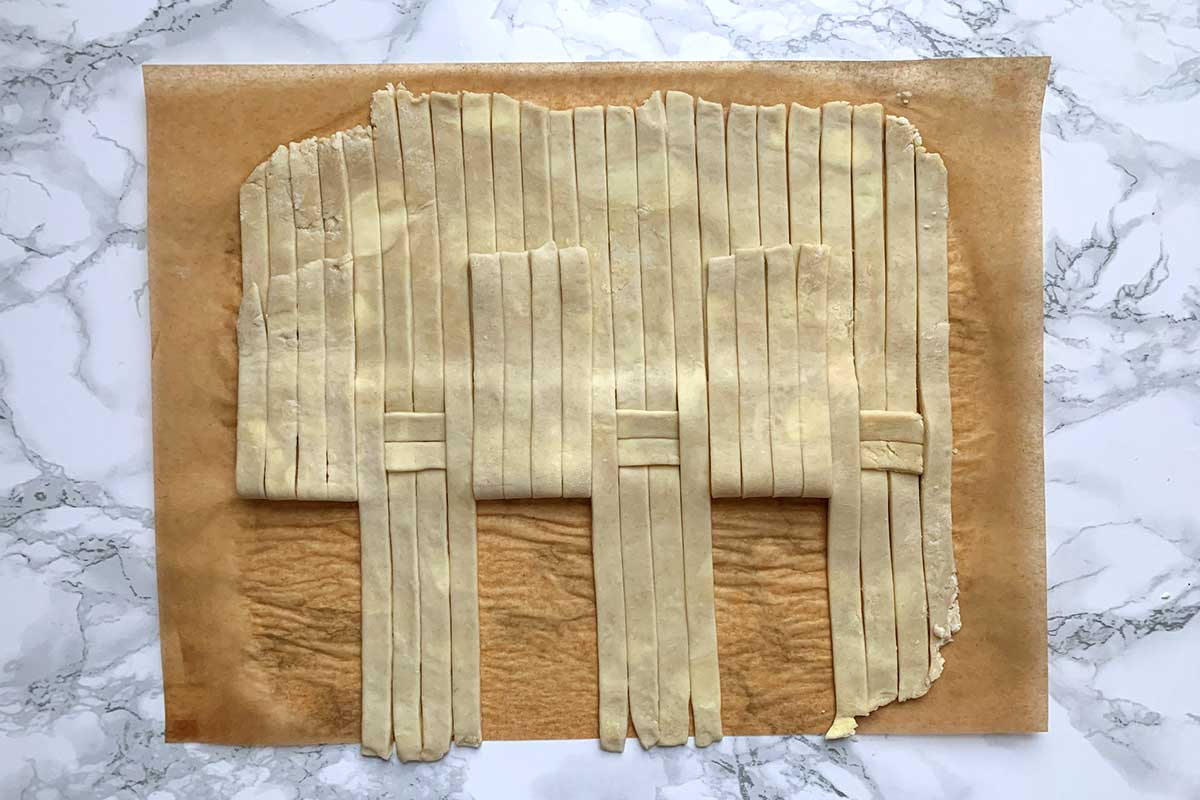 Lay one strip of dough from the second sheet horizontally across. From each quartet of folded-back strips, unfold the middle two strips. 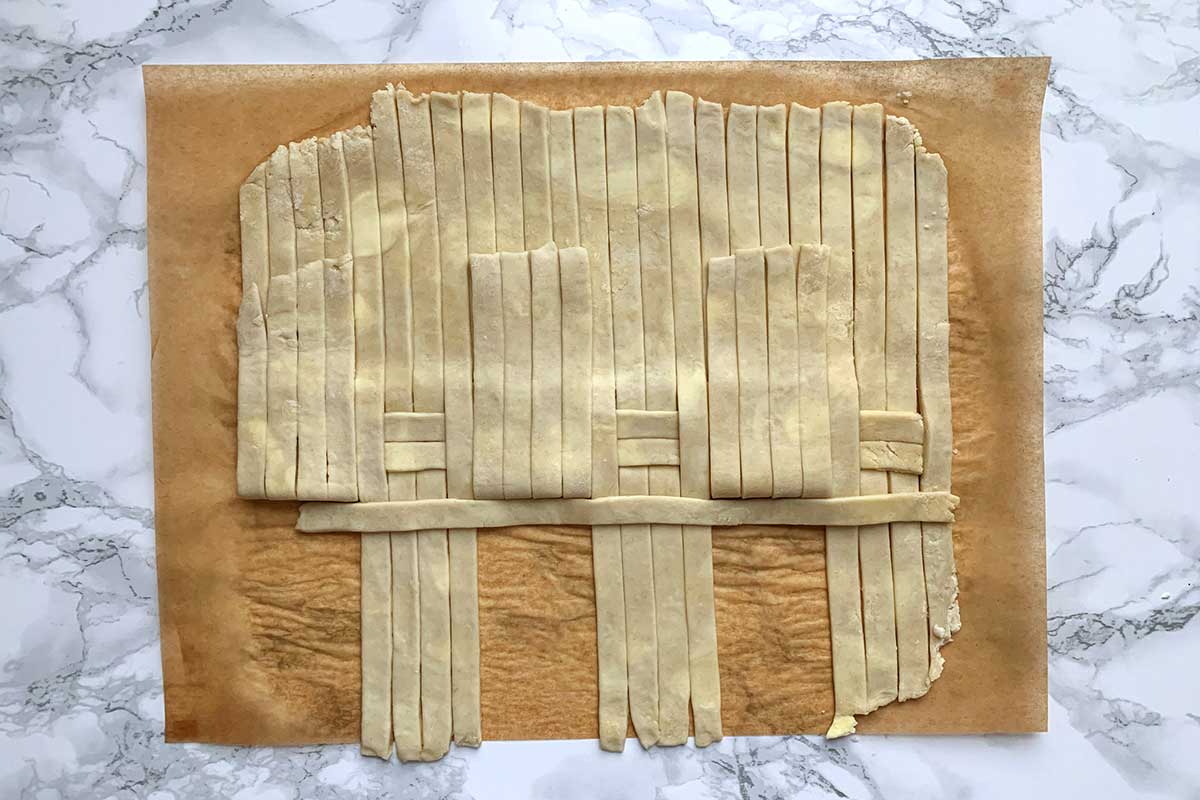 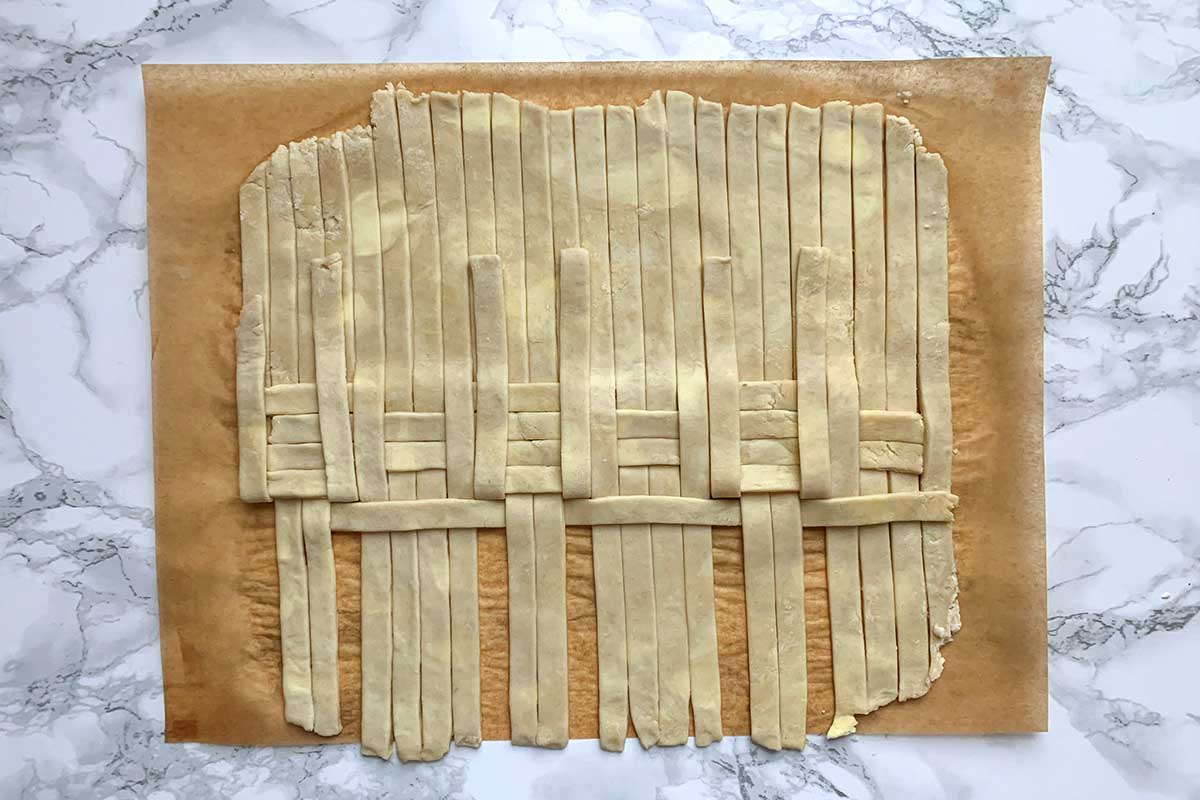 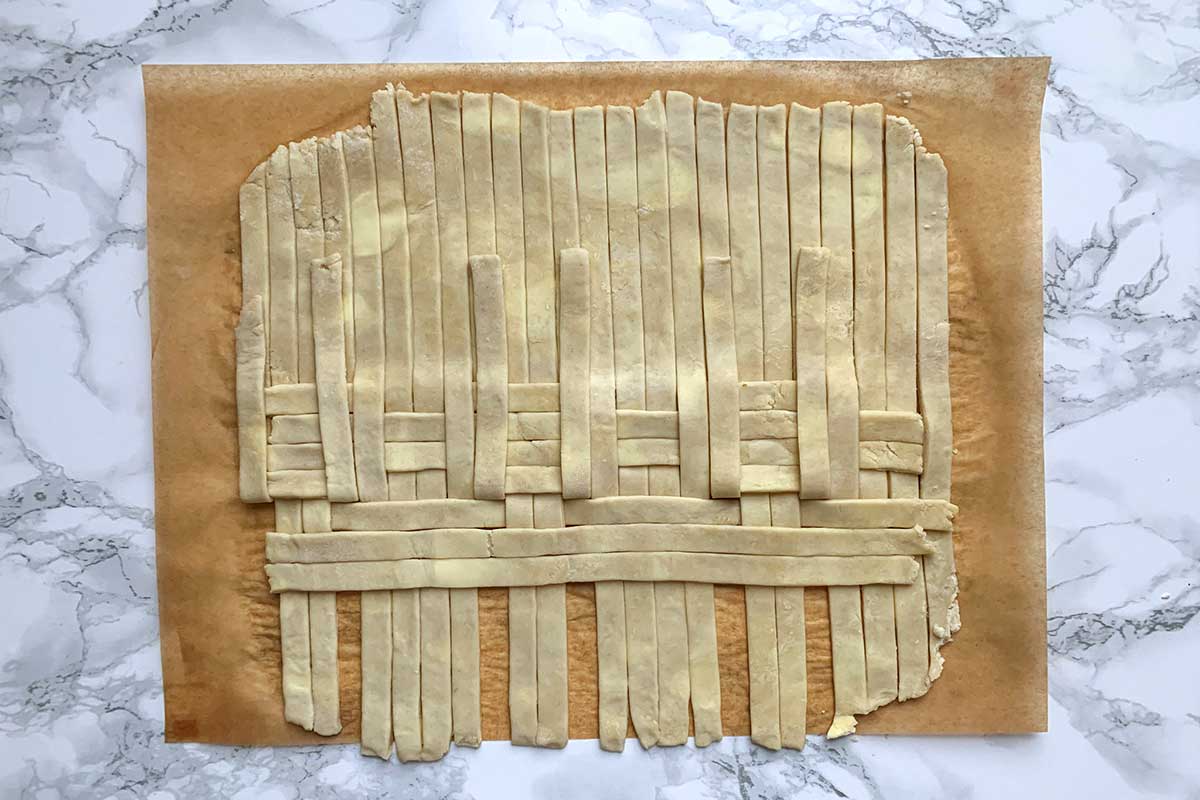 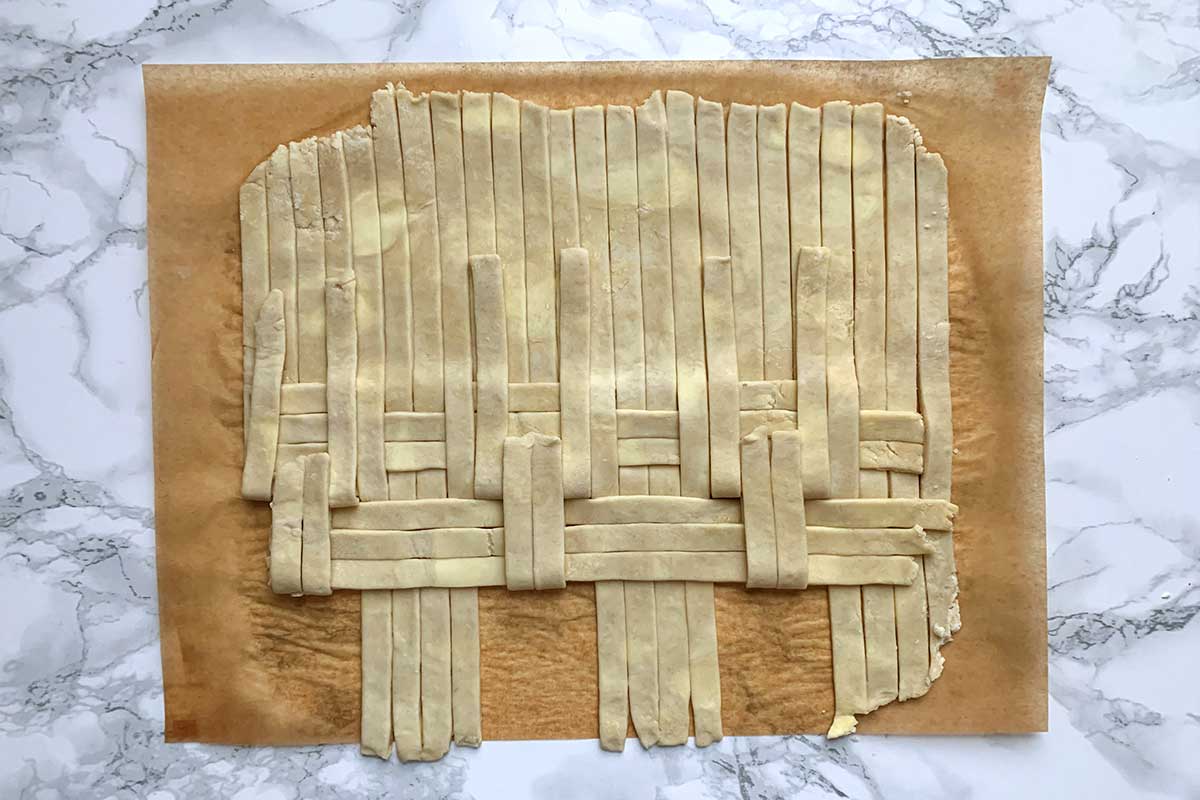 Take one strip from the second sheet of dough and lay it horizontally, fitting it closely with the previous horizontal strips. Unfold all the strips. 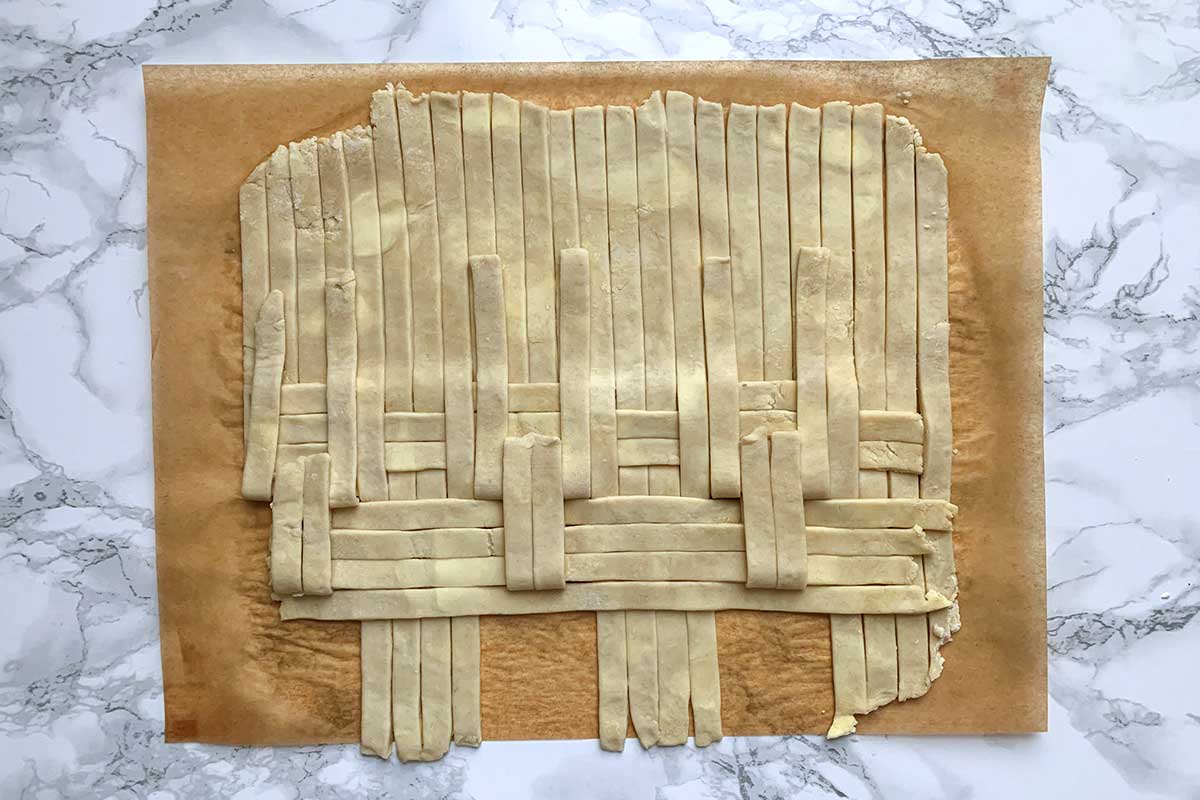 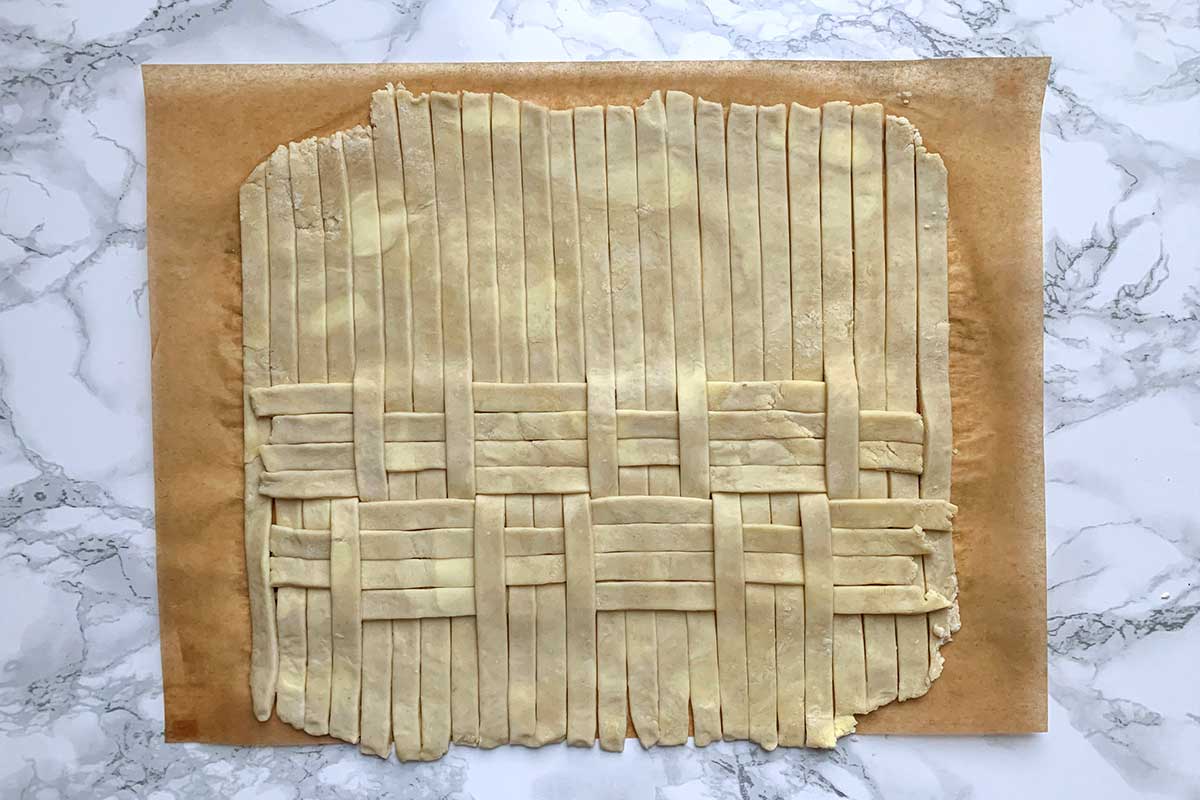 Repeat the pattern all the way down until you’ve woven the entire bottom half of the dough.

Do the same process on the other side

Rotate the half-woven sheet of dough 180° and repeat this pattern again until the entire sheet has been woven. You'll finish with a fully woven crust to top your pie. 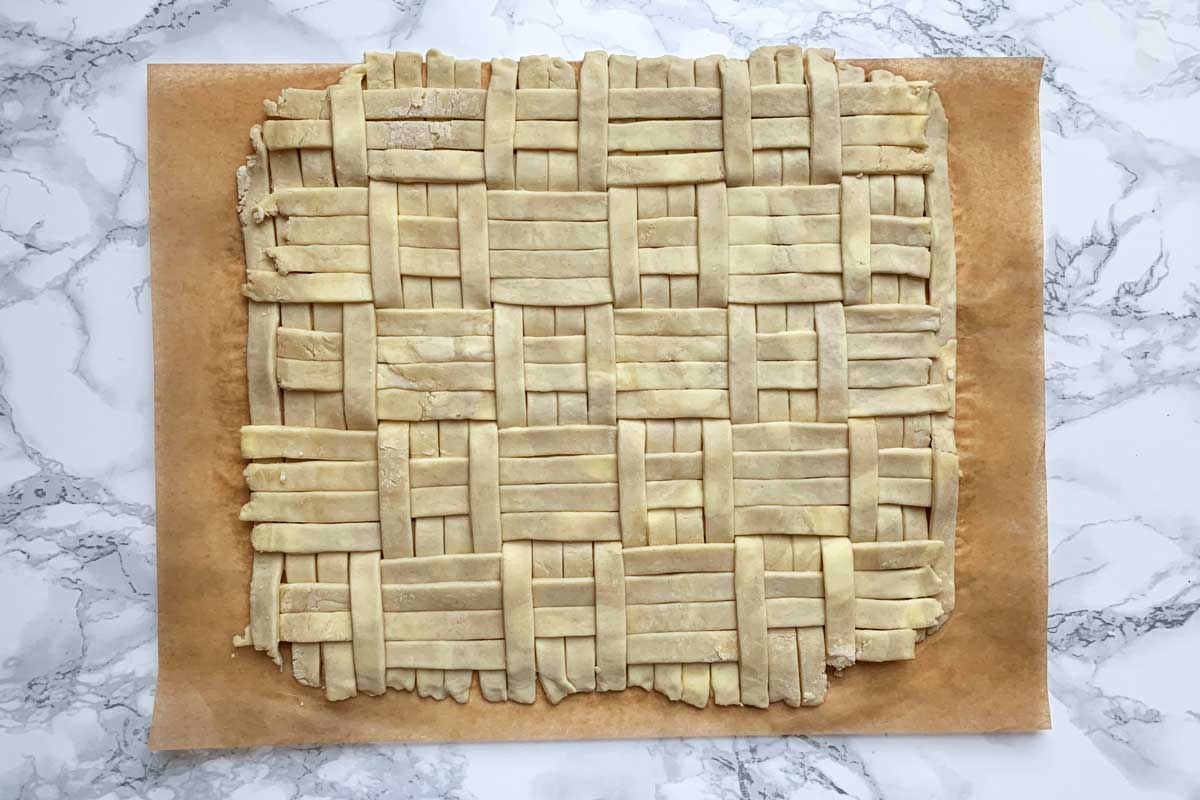 I baked this crust into an apple pie, the quintessential cozy autumnal dessert. But you can use this decorative crust technique for any double-crusted pie! Here's how to put everything together, using Apple Pie as an example.

Slide the parchment holding the woven sheet of dough onto a baking sheet and place in the freezer until solid, about 20 minutes.

While the pie top freezes, roll the third disk of dough into a 13" circle. Roll the dough onto your rolling pin, and gently unfurl the dough over a 9" pie pan. 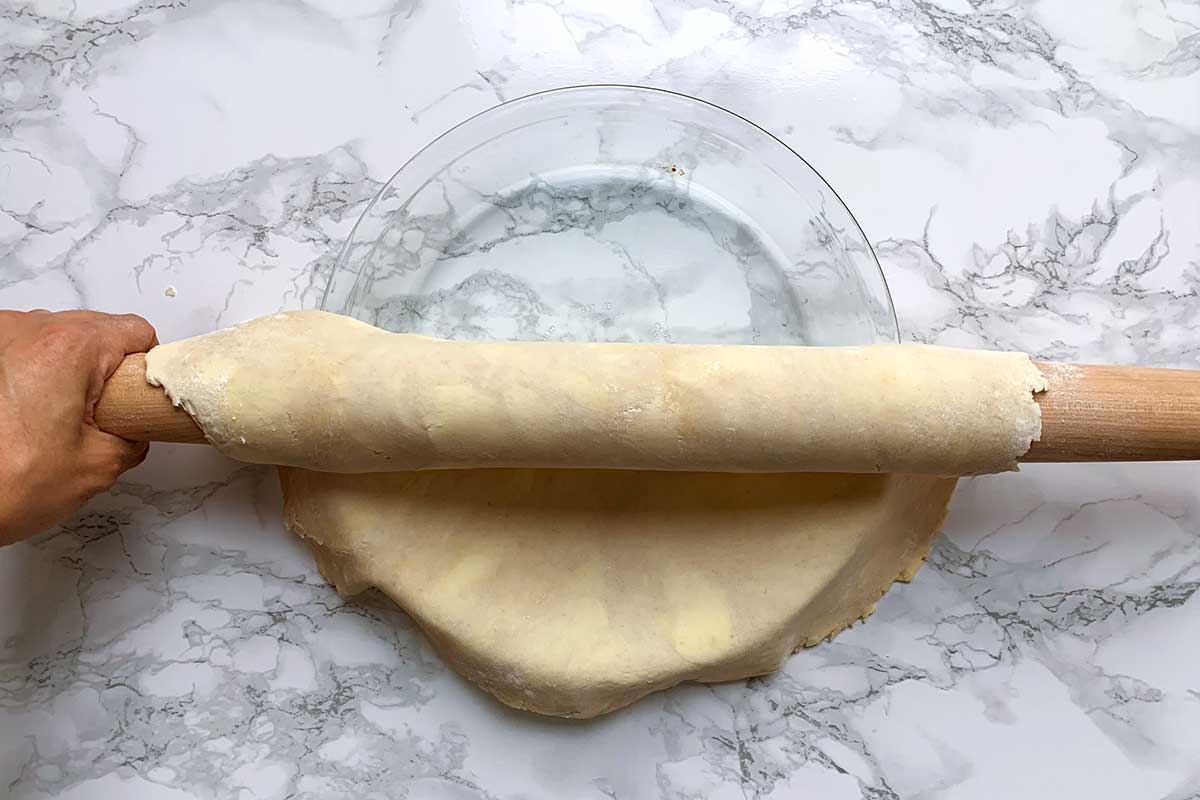 Prepare the filling for Apple Pie (or your favorite pie recipe!) and pour into the pie pan lined with dough. Trim the edges of the bottom pie crust and fold under to create an even overhang of dough. 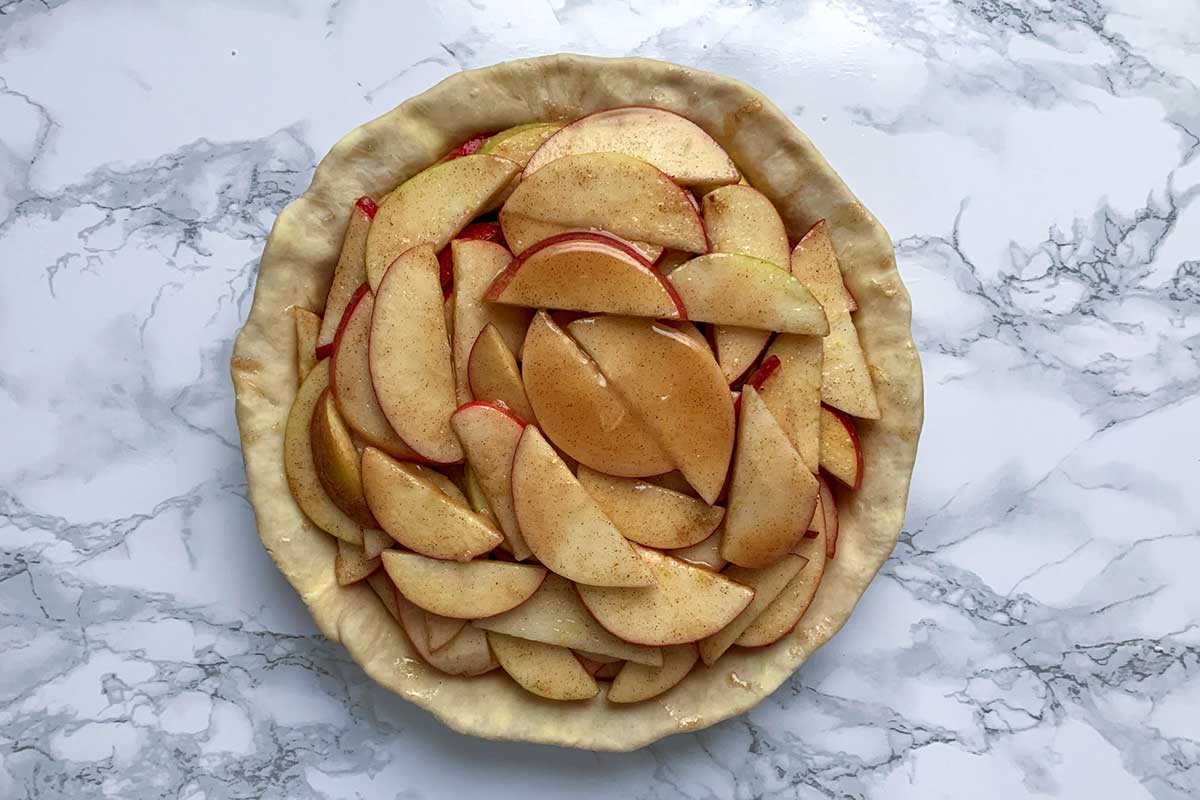 Preheat the oven to 425°F. Brush a small amount of water around the edge of the bottom pie crust to help attach the pie top.

Remove the frozen pie top from the freezer and gently place it over the filled pie. Allow the pie top to thaw for 2 to 3 minutes before pressing the edges to seal and running a paring knife around the edge of the pie pan to trim the excess dough.

Baker's tip: Dough scraps can be gently pressed together, wrapped tightly in plastic, and rested in the refrigerator for at least an hour before re-rolling once more for another pie. Alternatively, dough scraps can be placed on a baking sheet, brushed with egg wash, and baked until golden and crisp for a snack to tide you over until dessert-time! 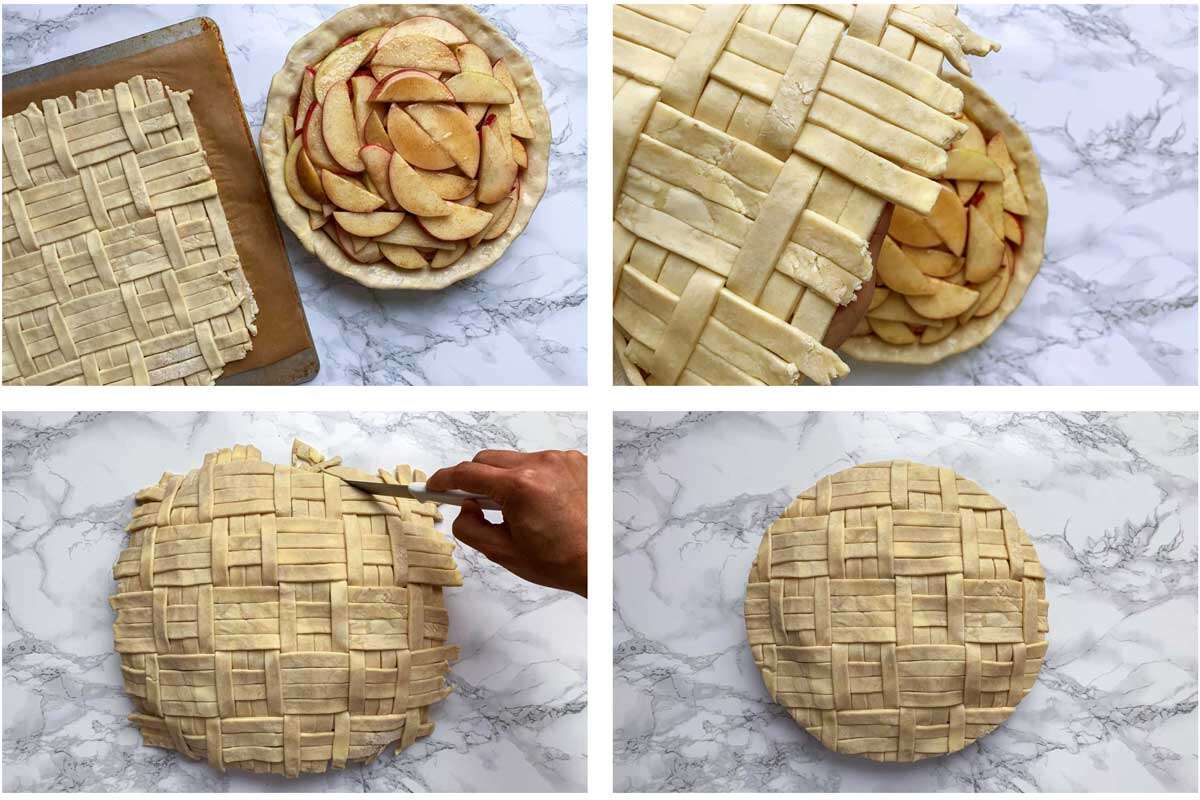 After 20 minutes, lower the heat to 400°F and cover the pie edges with a pie shield or aluminum foil. Bake for another 45 minutes or until the top is brown and the filling bubbly.

Remove the pie from the oven, and place it on a rack to cool completely before cutting. 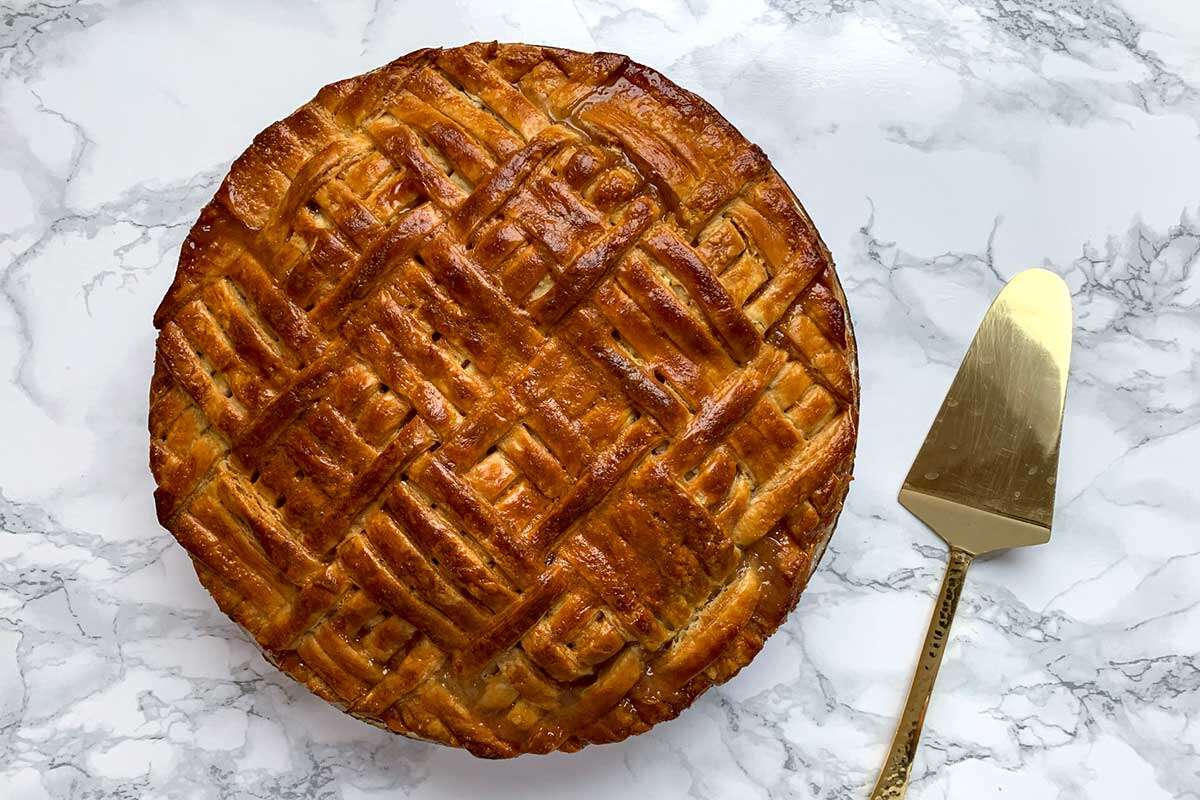 A comforting pie for colder days

The cozy vibes abound with this warmly spiced apple pie, snuggled up with a golden quilt that doesn’t involve pesky needle pricks or lugging out the sewing machine! It’s the perfect way to spend a fall day inside, and with these photos to guide you, step by step, it promises to be a mellow, meditative exercise that anyone can nestle into.

See more of Lauren's stunning pie designs on Instagram and in her new book, Pieometry. And for additional creative pie ideas to try out this season, see our post on fancy pie crust. 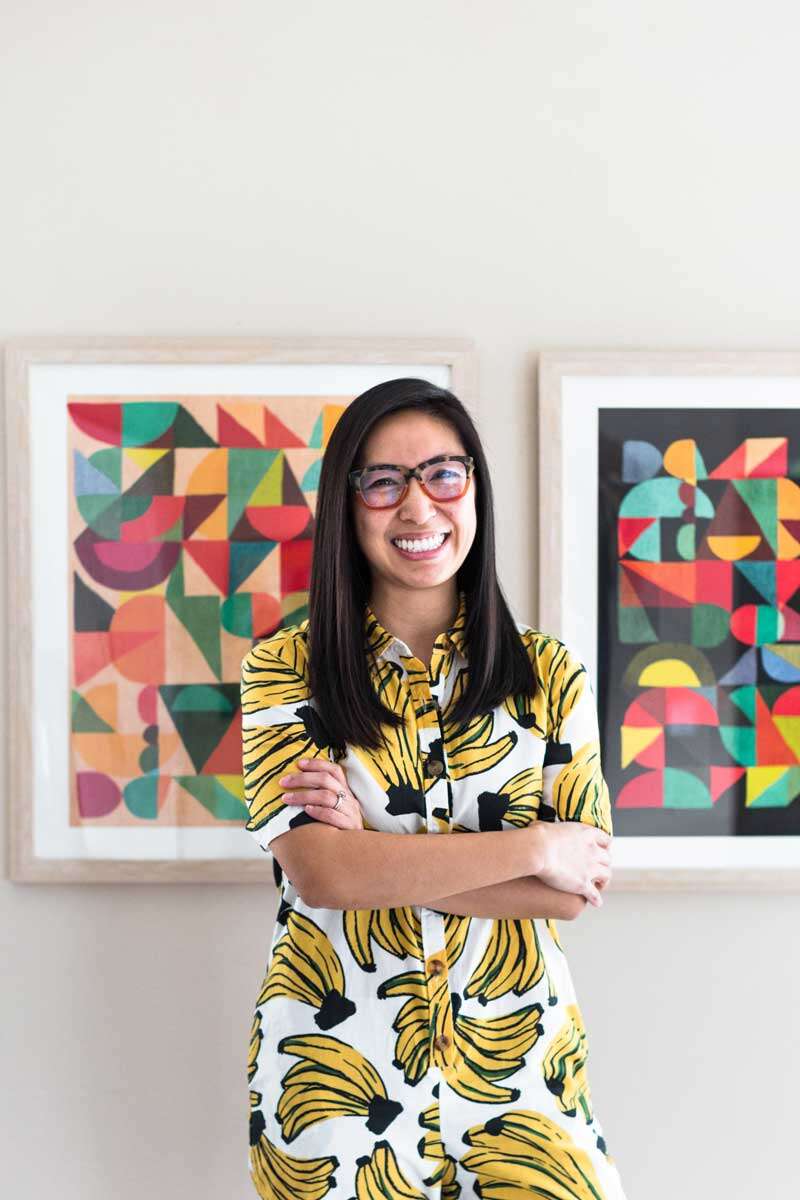 Lauren is an artist, writer, self-taught home baker, and the founder of the popular Instagram account @lokokitchen. Her colorful geometric style has led the way in contemporary pie art, and her iconic signature spoke design has been dubbed the “modern lattice.” Her work has been featured in publications such as Vogue, O Magazine, Buzzfeed's Tasty, and on-screen in Martha Bakes.

View all posts by Lauren Ko

I did this for an apple pie for Thanksgiving, and it came out beautifully! However, I had a mini panic attack trying to figure out how to transfer it to the pie. I couldn't just pick it up, the weaving would immediately begin to unravel. Since there are no details given on this step, I'll share what I did - I tried to press all the little strips together so they would be less likely to completely fall apart, then I used the parchment to help roll it on my rolling pin, then quickly transferred to the pie.

That's a good question, Hannah! You might have an easier time using the conveyor belt method demonstrated in Step 8 of our Cinnamon bun apple pie blog article. Happy baking!

Are there enough gaps in the crust for the steam to vent? I just read the post about how to prevent the gap between the top pie crust and the filling, and one of the main tactics was to have good vent holes. The photo of this woven crust looks pretty tight . . .

Yup! Any latticed crust will work in place of cut vents, even if you can't see the gaps yourself. Happy baking!

Ok, quilters up there. Lighten up. I see almost a rail fence pattern in this lattice work. I’d love to see some one attempt to replicate a log cabin pattern in the lattice work. Either way it looks fantastic, almost too good to eat, NOT!

As a handweaver, I love this design! I wonder, though... does it provide enough venting to avoid a huge gap between crust and fruit?

It sure will, Carolyn! Even tight lattice has enough gaps inherent in its design so that additional vents are not needed.

It's a lovely pie but since you weave it, the top is woven, a quilt is pieced and layered . I'm sure it will taste just as good either way. We quilters are protective of our craft.

Of course! This is to give a quilted appearance, and isn't intended to be an actual quilt.

I love the look of this piecrust but it is definitely not quilted. Nor does it even simulate a quilt. It is woven however, and the result is the look of weaving like in a basket.Yummy gorgeous.

A recipe that echoes across generations

It's connected my family from Vietnam to America