Ever since I was a child, there has been one item in the pastry case that I’m incapable of resisting. It’s not the most beautiful sweet. In fact, it may be the least visually enticing: a brown orb, varying in size from golf ball to tennis ball, coated in chocolate sprinkles.

Brown on brown, unadorned and unfussy, the rum ball has nevertheless been the enduring object of my affection for decades.

Part of the rum ball’s intrigue is that no two are alike. As I child I never much considered why; I just naturally favored the ones that contained bits of nuts or raisins, a welcome textural variation within the smooth, truffle-like surroundings. I often found my rum balls at supermarket bakery counters or European delicatessens in the Canadian Prairies, where, with prices hovering around $1.25, the likelihood they were made with real rum seems low. Instead, they were perfumed with the spicy, slightly sharp caramel notes of rum extract or flavoring.

In my early adulthood, I tried to make my favorite treat at home a few times, baking full pans of brownies only to grind them up, but they were never quite right. It wasn’t until my second semester of pastry school that I finally discovered the truth: In most pastry shops there’s no recipe for rum balls. They’re an invention born of thrift, a zero-waste original made almost entirely of scraps. Like diplomat pudding, another pastry school classic made from offcuts soaked in custard and baked, the rum ball ensures that nothing is ever wasted but instead injected with new life (and, if you were my severe French pastry teacher, the heftiest dose of rum I’d ever encountered).

When I later became a pastry chef, I always kept a bin in the freezer reserved for trimmings, salvageable mistakes, and stale baked goods to transform into rum balls. The gospel of every restaurant or bakery kitchen is to waste as little as humanly possible, whether that means repurposing yesterday’s croissants as today’s bread pudding or concocting a tart from dough and leftover vegetable scraps.

And while a no-waste, thrifty yet tasty confection seems ideal for these inflationary times, I still fear its eventual disappearance — might it finally be considered too stodgy or unsexy? I see rum balls less and less frequently in supermarket pastry cases, and while that might be a good thing for my sugar intake (as I still can’t resist them), I want future generations to be able to enjoy these special sweets. And otherwise, where do all the pastry scraps end up?

Fortunately, one can always make them at home. While you probably don’t produce anywhere near as many sweet scraps as a bakery, storing leftovers in the freezer means that eventually, a few times a year, you’ll end up with enough to whip up a batch of delectable rum balls. (And for a formal recipe that’s a bit more complicated but no less delicious, see Eggnog Rum Balls.)

How to make your own rum balls

Start accumulating your scraps: The rum ball begins with a bag in the freezer where pastry scraps are squirreled away, whether that’s bits of cake from leveling off a layer cake, the edges of bar cookies when you want them cut perfectly straight, or even a mistake like a woefully underbaked brownie. Once you’ve accumulated a few cups worth, transfer to the fridge to thaw overnight.

If you don’t have a stash of pastry scraps, you can use just about any brownie recipe to make rum balls.

Prep your fruit: Because I love texture, my rum balls always start with a handful of raisins (golden, by preference). I put them in a jar, cover them with dark rum, and leave them to plump overnight. If you’re anti-raisin, however, simply substitute with another dried fruit, such as dried apricots — or skip this bit, but do have some rum on hand. (Any golden or dark rum will do; I like to use dark.)

Start mixing: Transfer your thawed scraps to the bowl of a food processor and pulse until finely ground. (This can also be done by hand.) Depending on the moistness of your scraps, they may already be turning into a dough-like consistency. (If that’s not yet the case, it will happen once you add the rum.) Add the rum raisins (or just a big glug of rum), along with any other optional ingredients to provide added texture — I like a small handful of walnuts and a tablespoon or two of chunky marmalade. You can use other nuts or jams here too, if desired. Pulse to combine.

Tweak to your tastes: At this point, what you add is very much contingent on what sort of scraps you started with. What you’re ultimately looking for is a rich, chocolate-forward flavor laced with rum but not to a biting degree. (Although the alcoholic tang will mellow out as the rum balls sit.) If your scraps were quite chocolatey, that might be that, but in all likelihood, you’ll want to add some cocoa powder. Depending on the sweetness of your scraps, this may need to be balanced with a little confectioners’ sugar. More rum? Up to you!

The texture should be that of a soft, slightly sticky dough punctuated with textural bits (nuts, dried fruit, peel) and firm enough to roll into balls. Add more cocoa powder or ground almonds if the mixture needs thickening.

Roll and coat: Bakery rum balls tend to be monstrously huge; I prefer to make them bite-sized at home. Roll tablespoon-sized pieces into balls, then roll in chocolate sprinkles to coat. You might alternatively roll them in cocoa powder or desiccated coconut, but, in my opinion, chocolate sprinkles really gild the lily. Place them in an airtight container (and nestled into mini cupcake liners, if you like!) and refrigerate until chilled, where they will keep for at least two weeks.

I like to think of rum balls as the original cake pop, only boozier. They will be the perfect addition to your holiday cookie plates or kept all for yourself whenever you need a delicious, chocolatey bite much greater than the sum of its parts.

If you’re looking for the best cookie recipes to serve alongside your rum balls this season, see this new holiday collection: A Cookie for Everyone. 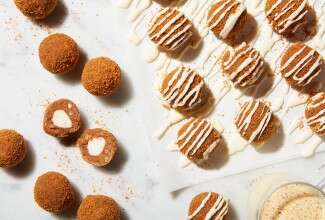 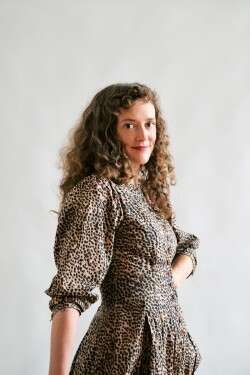 Camilla is a cookbook author, writer, recipe developer, and cooking teacher specializing in preserving and pastry. She has been a culinary professional for over 20 years and is one of Canada’s only Master Food Preservers.

View all by Camilla Wynne

The tennis ball sized ones were fantastic with a maraschino cherry placed in the center!!

I have made bourbon balls and rum balls at Christmas for years. The idea of using scraps is interesting. My recipes call for Nilla wafers or other cookies like gingersnaps, and the cookies are small, one-bite size. (Tennis-ball size? Too much!) However, I've never seen them in any bakery. Is that a Canadian thing?

Hi Lucy, it sounds like they were definitely present in Canadian bakeries in Camilla's youth, and I suspect you may still find them in bakeries in Canada as well as America, particularly during the holiday season.