Using a thermometer with yeast bread

How to nail the perfectly baked loaf

THUMP THUMP THUMP. Yeast bread bakers have traditionally tested their loaves for doneness by tapping on the bottom and listening for a distinctive hollow thump: a perfectly good method. But for those of us who don't like juggling blistering hot loaves in order to get at their bottoms for the thump test, there's another method: taking the bread's internal temperature. Using a thermometer with yeast bread not only saves you the "hot potato" juggle, it offers excellent guidance — if you know how to interpret your temperature results. 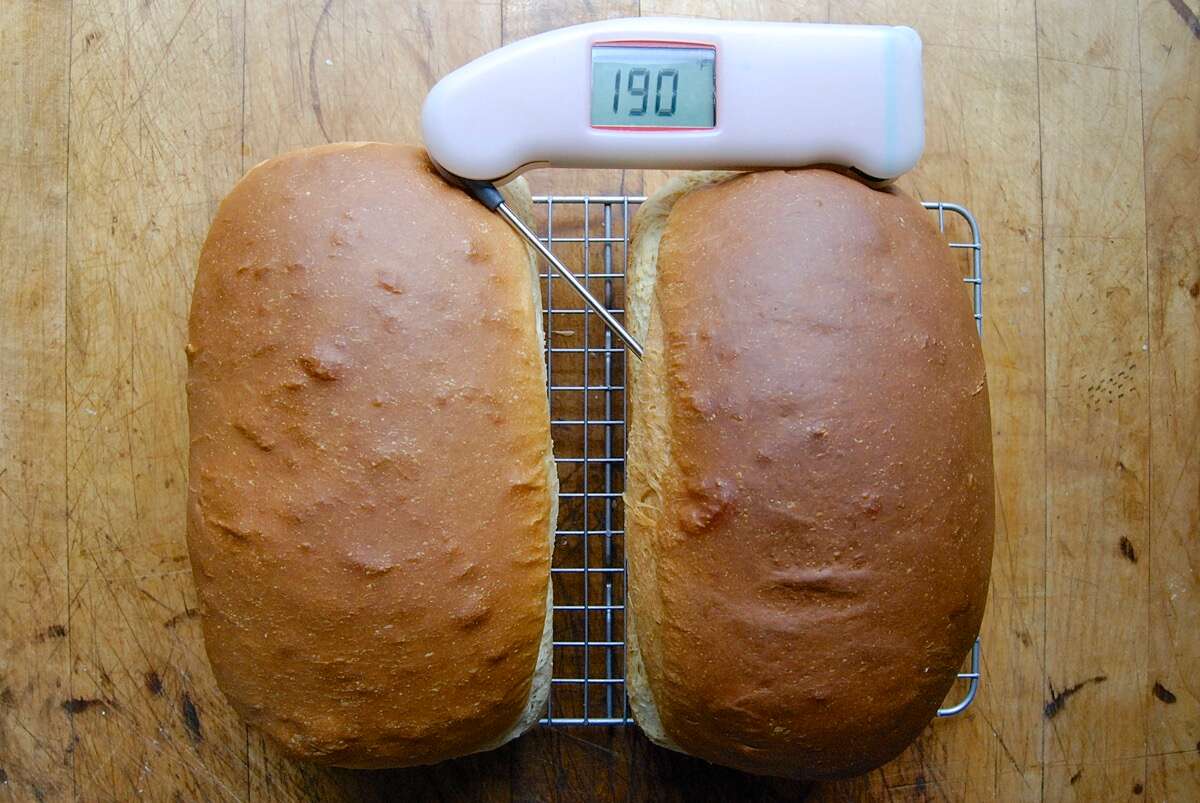 You may notice that many of our King Arthur Flour yeast bread recipes call for the perfectly baked loaf to reach an internal temperature of 190°F. And honestly, this is a good benchmark. Most loaves and rolls will indeed be done when they register 190°F at their center.

But some breads — baguettes, for instance — need to reach a higher internal temperature to be fully baked. And some bakers argue that large, dense/hearty whole grain rounds should be baked to an internal temperature of 205°F to 210°F, in order to ensure they're completely baked at the center.

I recently baked an array of yeast breads, taking their temperature (at the center of the loaf) in 5-minute increments towards the end of their bake and detailing the results. Bottom line: 190°F is indeed a good benchmark. Every loaf I baked — except for the baguettes — cooled to an excellent texture when brought to 190°F during baking. Still, I discovered some interesting things along the way. Let's check out the tests. 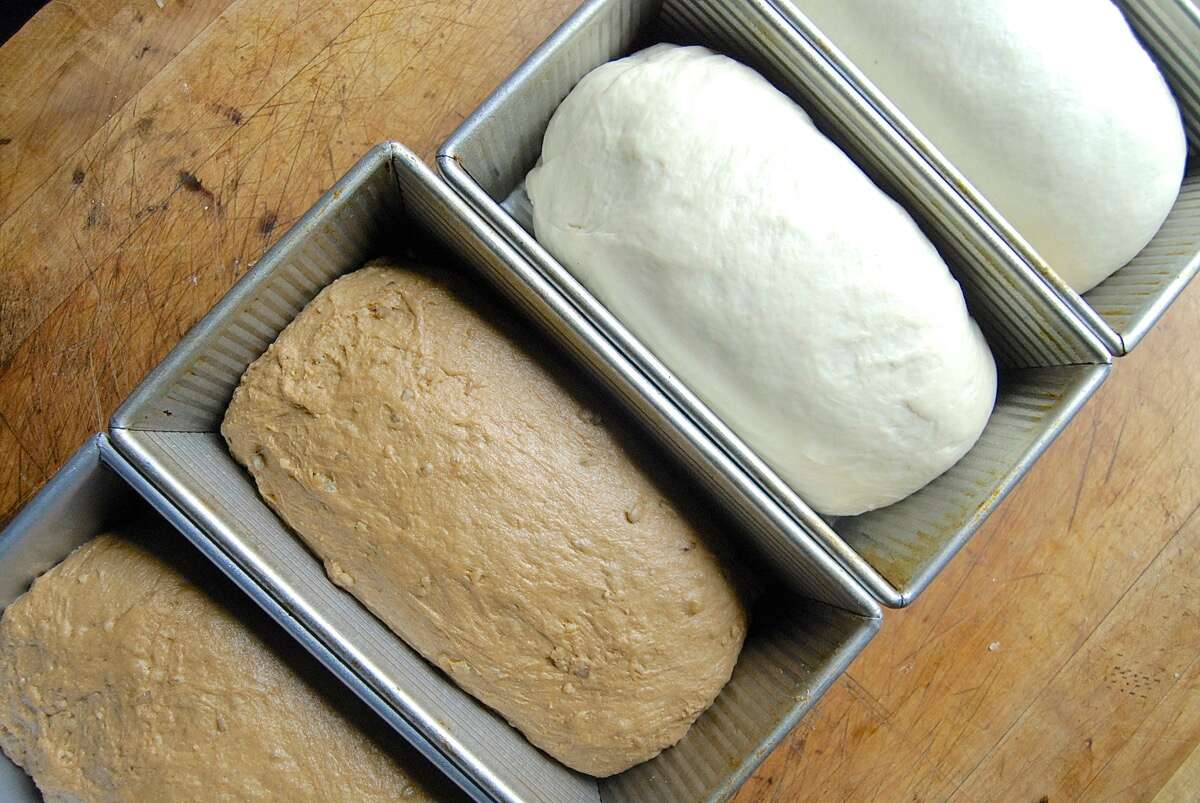 Using a thermometer with yeast bread: 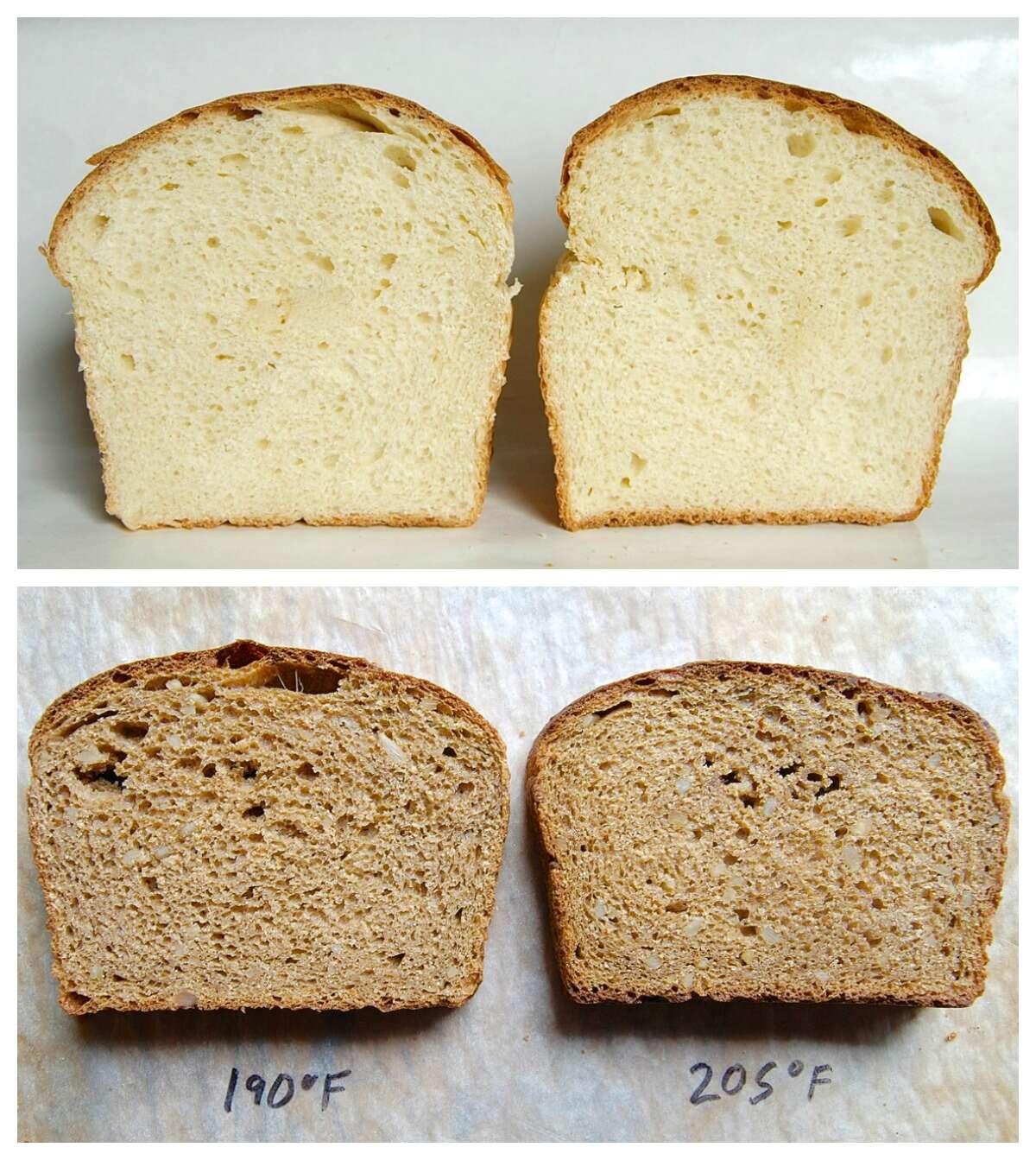 For each bread, I bake one loaf to 190°F, one to 205°F. Once cool, I slice the loaves right through the center, to make sure I'm seeing the point where any under-baking would have happened.

Loaves baked to each temperature look similar at the center; the only visual difference is the slightly thicker crust on the loaves baked to 205°F.

Sampling the loaves, though, there's a noticeable difference in texture. The 190°F loaves are moister and softer; the 205°F loaves, drier. And after a couple of days, the 190°F loaves still retain some moisture — making them seem fresher. 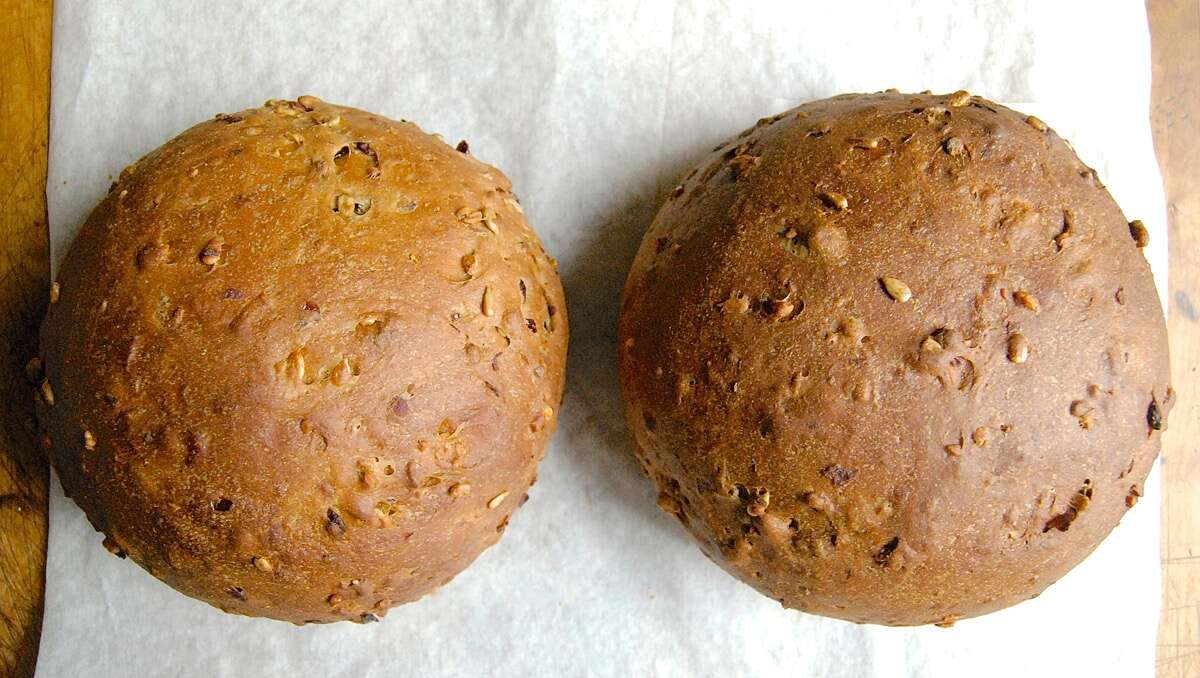 Easy Granola Bread is a good example of a loaf that might be difficult to bake to the correct doneness without using a thermometer.

It's a dark loaf to begin with, thanks to the whole-grain flour, so it's hard to gauge how done it is by its crust color. Add its dense texture, and its shape — there's no bread where the center is farther from the edge than a round boule — and you've got a baking challenge. 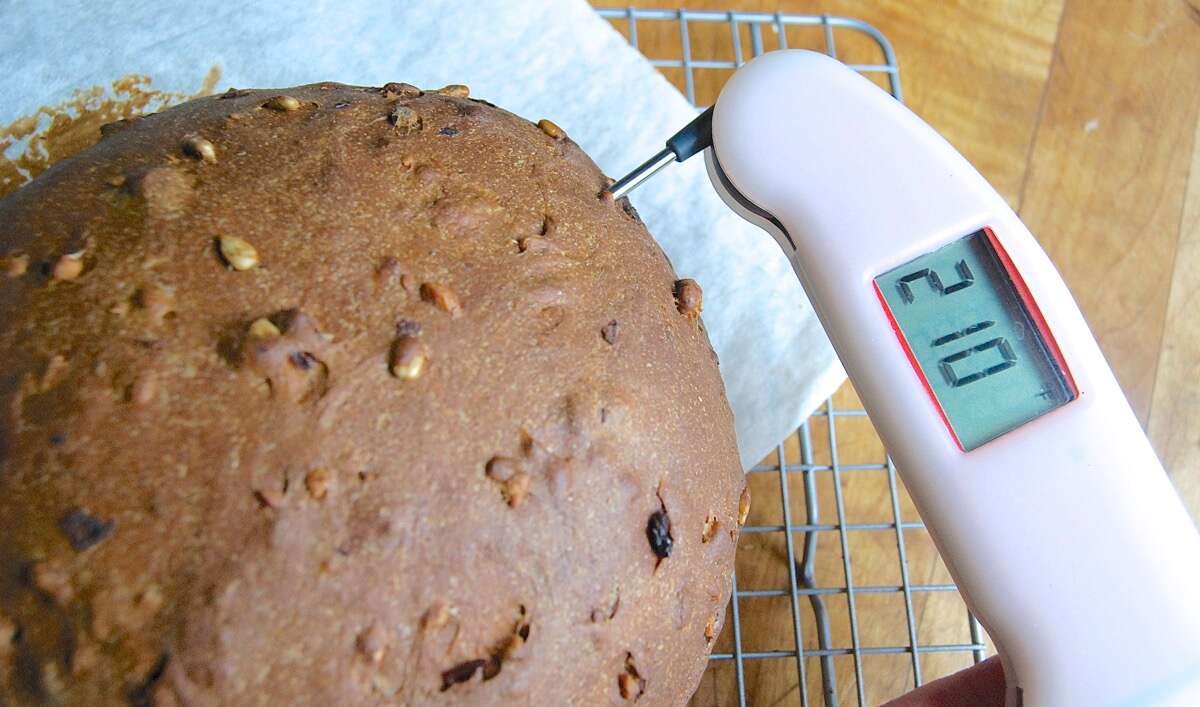 I bake one loaf to 190°F, the other to 210°F — the temperature many bread bakers claim is optimum for this type and shape of loaf, given the need to ensure it's fully baked all the way to the center. 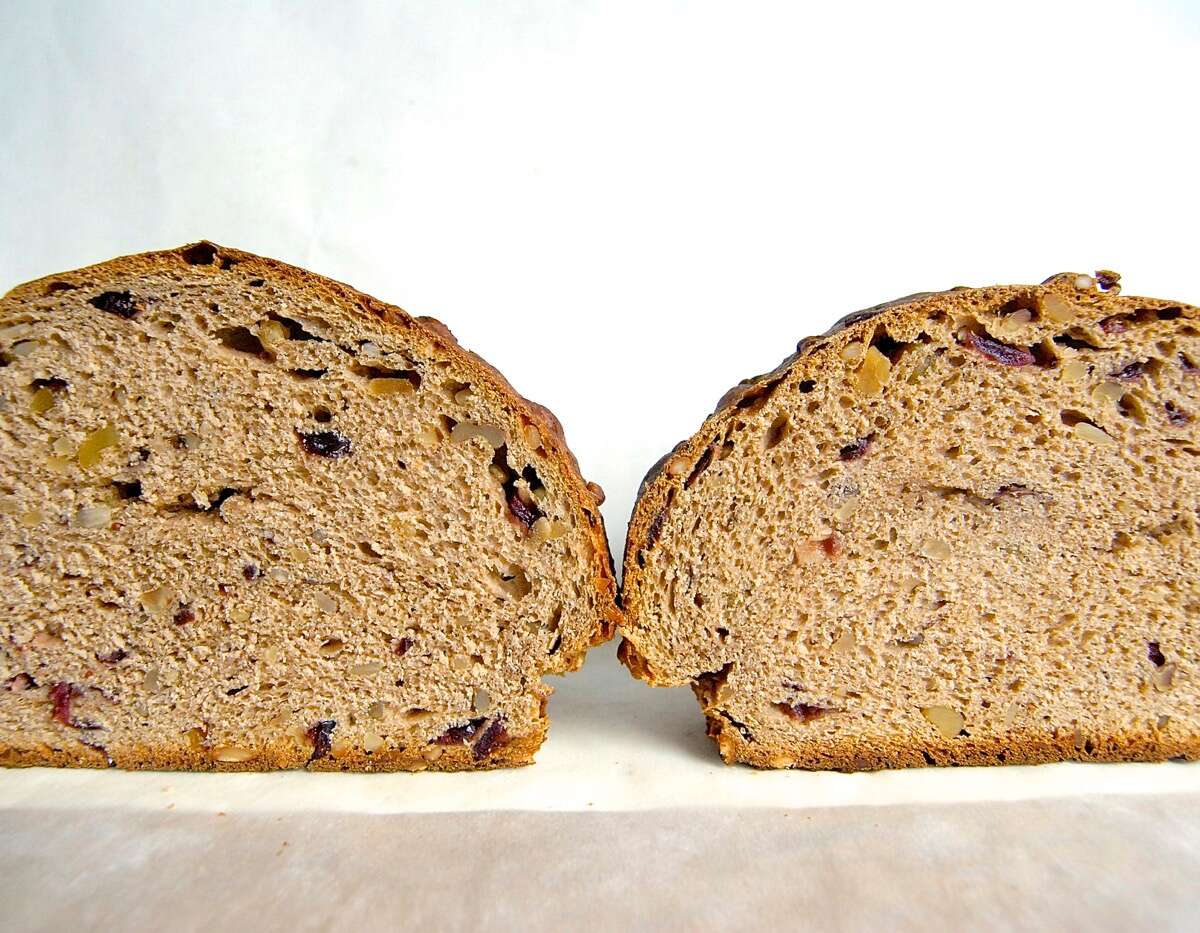 The result? Just like the previous test, these loaves are similar in appearance. The center of the 190°F loaf (pictured at left) isn't gummy/under-baked. But again, once I taste the two side by side, the 190°F loaf is definitely moister, its crust less tough. And it stays softer as time goes by.

Verdict: Even a large, fairly dense whole grain loaf is fully baked at 190°F. I enjoy a soft, moist, tender loaf, so the 190°F bread is my favorite. If you like your whole-grain bread drier/chewier, bake it longer — but baking to 210°F isn't necessary to prevent under-baking.

Let me just add that I LOVE this bread for its mild yet rich flavor: vaguely nutty, somewhat grain-y. And its texture is nearly cake-like — it's that tender. 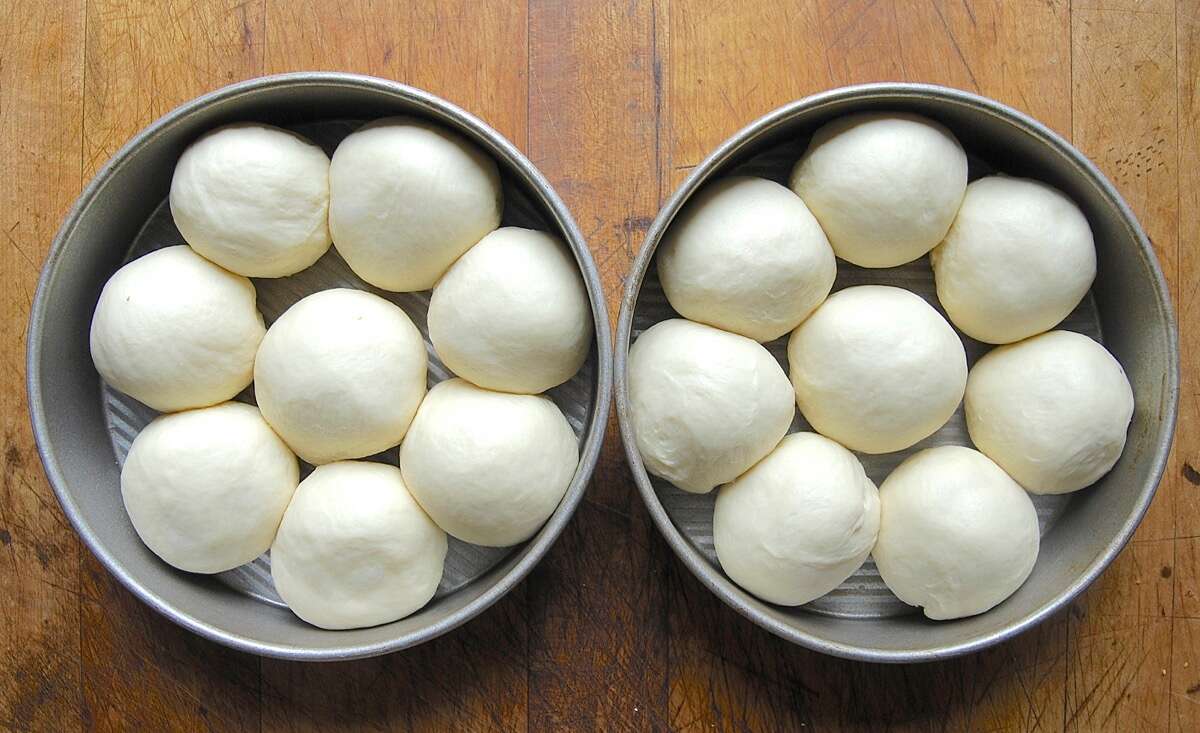 Does the ideal internal temperature change with the size of the bread? Let's bake these Golden Pull-Apart Butter Buns and find out.

The recipe calls for buns to bake for 22 to 24 minutes, until golden brown. 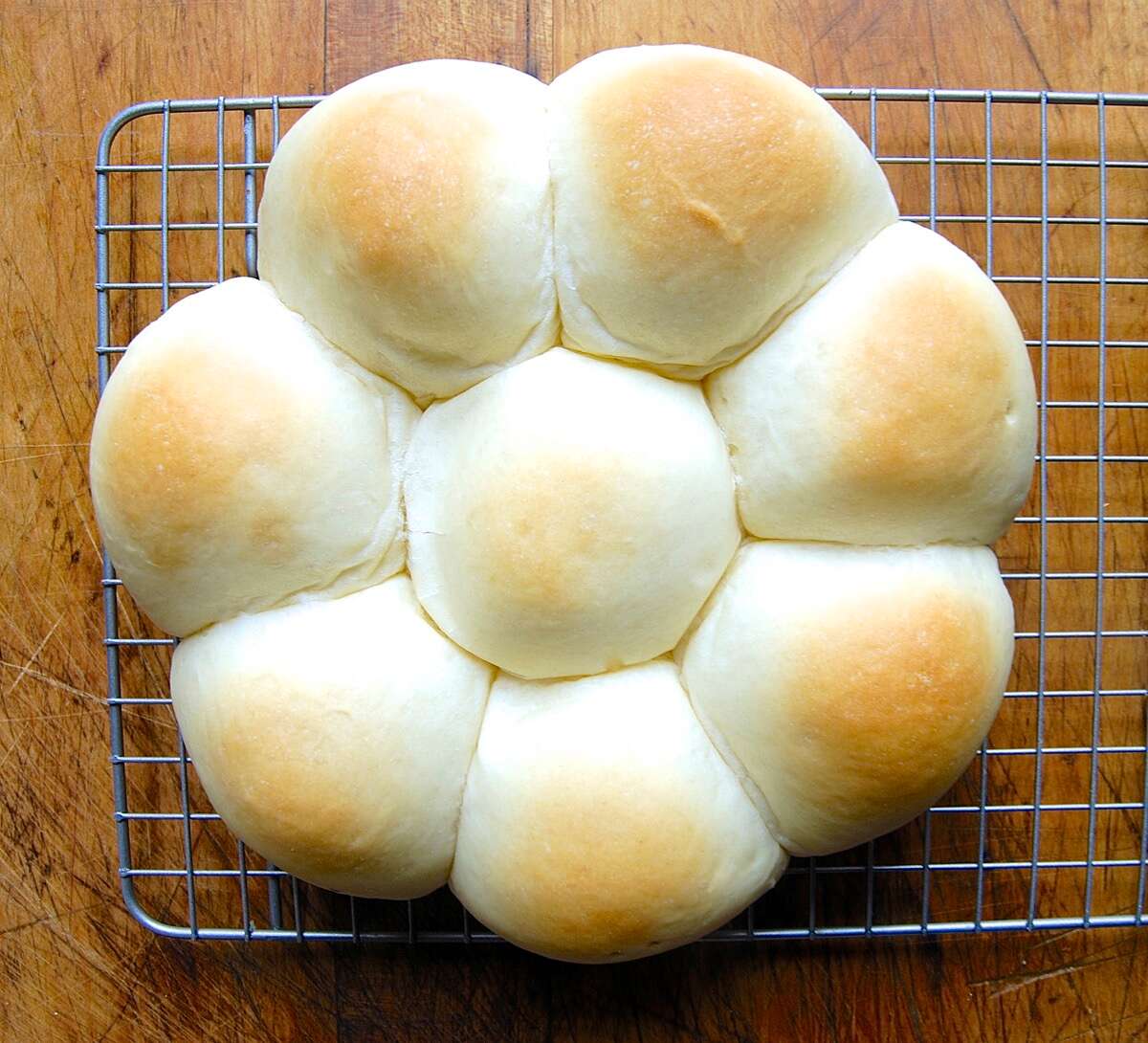 I decide to start taking their temperature at 15 minutes. At this point, as you can see, they're barely browned. Yet the interior temperature of one of the buns on the edge is already 192°F, while the center bun is just 171°F.

I take the buns out of the oven. Meanwhile, I bake the other pan of buns for 5 more minutes — a total of 20 minutes. 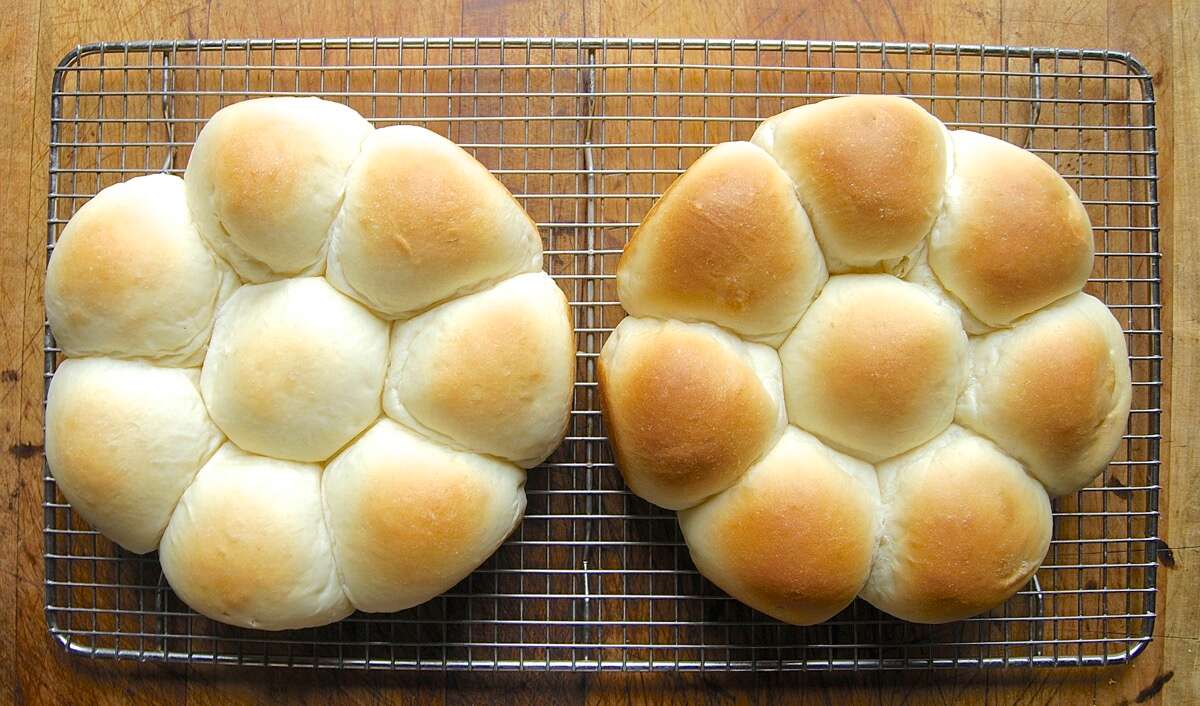 The 20-minute buns (right) are light golden brown. An outside bun registers 208°F, while the center bun is 199°F — well above the 190°F proving ideal for other breads.

So we have four different finish temperatures to evaluate with these buns: 171°F and 192°F from the first pan; and 199°F and 208°F from the second pan. 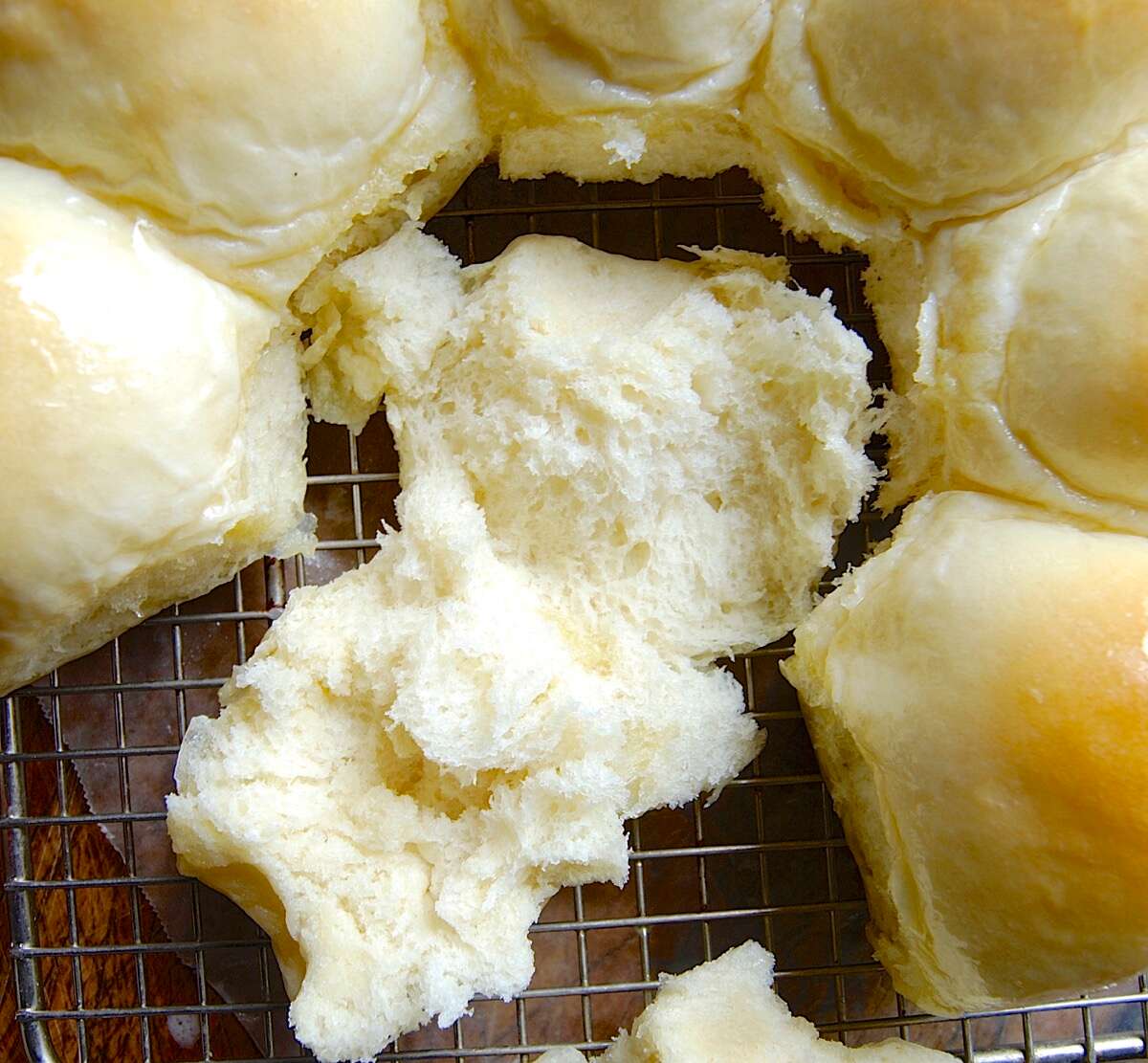 Predictably, the 171°F bun is very soft and tender and moist. It's not gummy, but it is VERY fragile; squeeze a piece in your fingers, and it turns into a dough ball.

Notice I said "hot," though. The big difference is apparent once the buns cool. All slice nicely; all exhibit fully baked interiors. But the buns from the first pan (the pale buns) are still soft, tender, and moist at room temperature; while the buns from the second pan (the ones with nicely browned tops) are somewhat dry and tough.

Verdict: If you're serving buns hot from the oven, bake them until light brown. If you're planning on serving them at room temperature — or reheating them — bake them only until they're pale gold, and their interior temperature doesn't rise higher than 190°F or so. 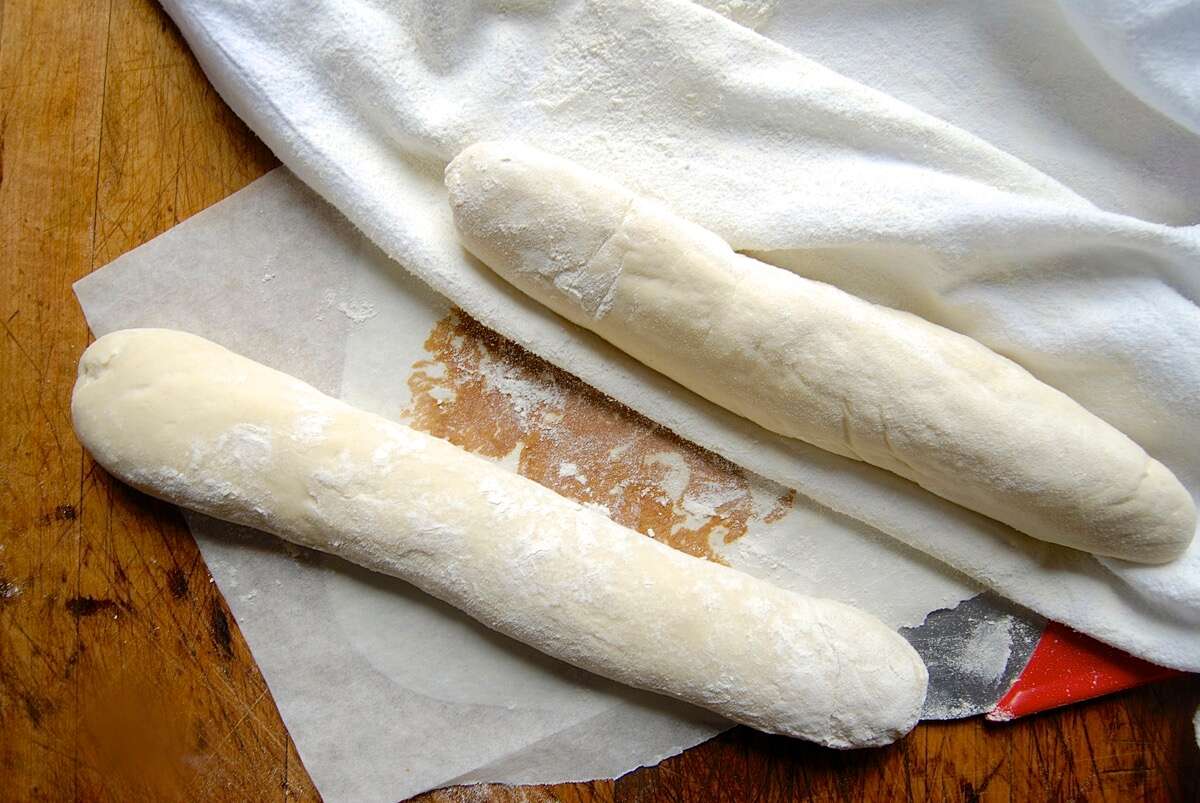 My final test is a bread that's at the opposite end of the texture spectrum from soft dinner rolls: crisp/chewy baguettes. I use our Classic Baguette recipe to discover the optimum way to bake the ideal crusty baguette.

First, I rethink my expectations. Do I want a baguette with a soft, moist center? No; I want a center that's fairly dry, chewy, and filled with large holes: typical baguette texture. 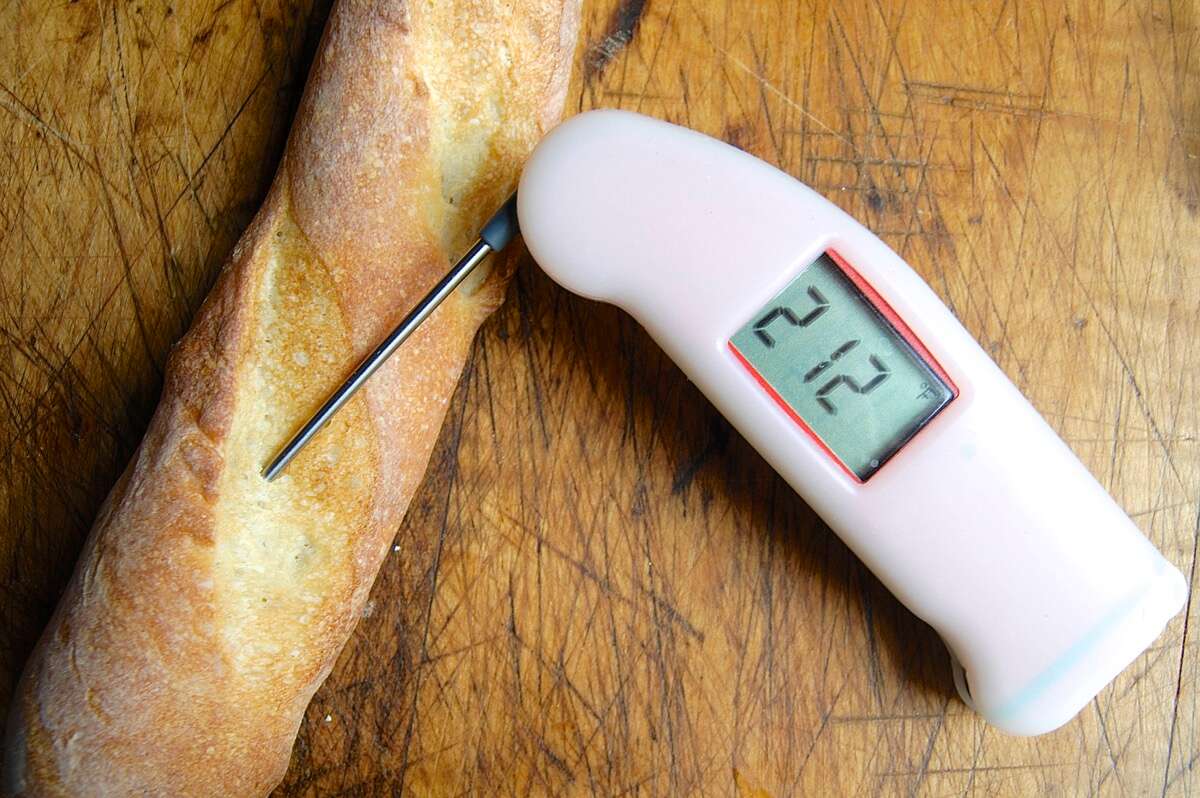 So rather than evaluating baguettes by their internal temperature, I decide to judge them by the darkness of their crust. The recipe calls for baking the loaves for 25 to 30 minutes; I take my first loaf out after 20 minutes, when it's a medium golden brown. Its interior temperature is a whopping 212°F.

I take the next loaf out 5 minutes later: again, its temperature is 212°F. I learn later that bread's interior temperature will never rise above 212°F, since that's the boiling point of water (and the temperature of steam, which water becomes as it evaporates from the loaf).

The remaining loaf I bake the full 30 minutes; it's a very dark golden brown. Once cool, I compare all three loaves: the darker loaves have richer flavor, due to caramelization of the crust. They're also chewier, as their crust is somewhat thicker.

And, just as I found in my other tests, the loaf baked to the lowest temperature retains its moisture longest: which in the case of baguettes isn't a good thing. Moisture in the interior of an under-baked (light-crusted) baguette will migrate outwards, leaving the crust soft and leathery. 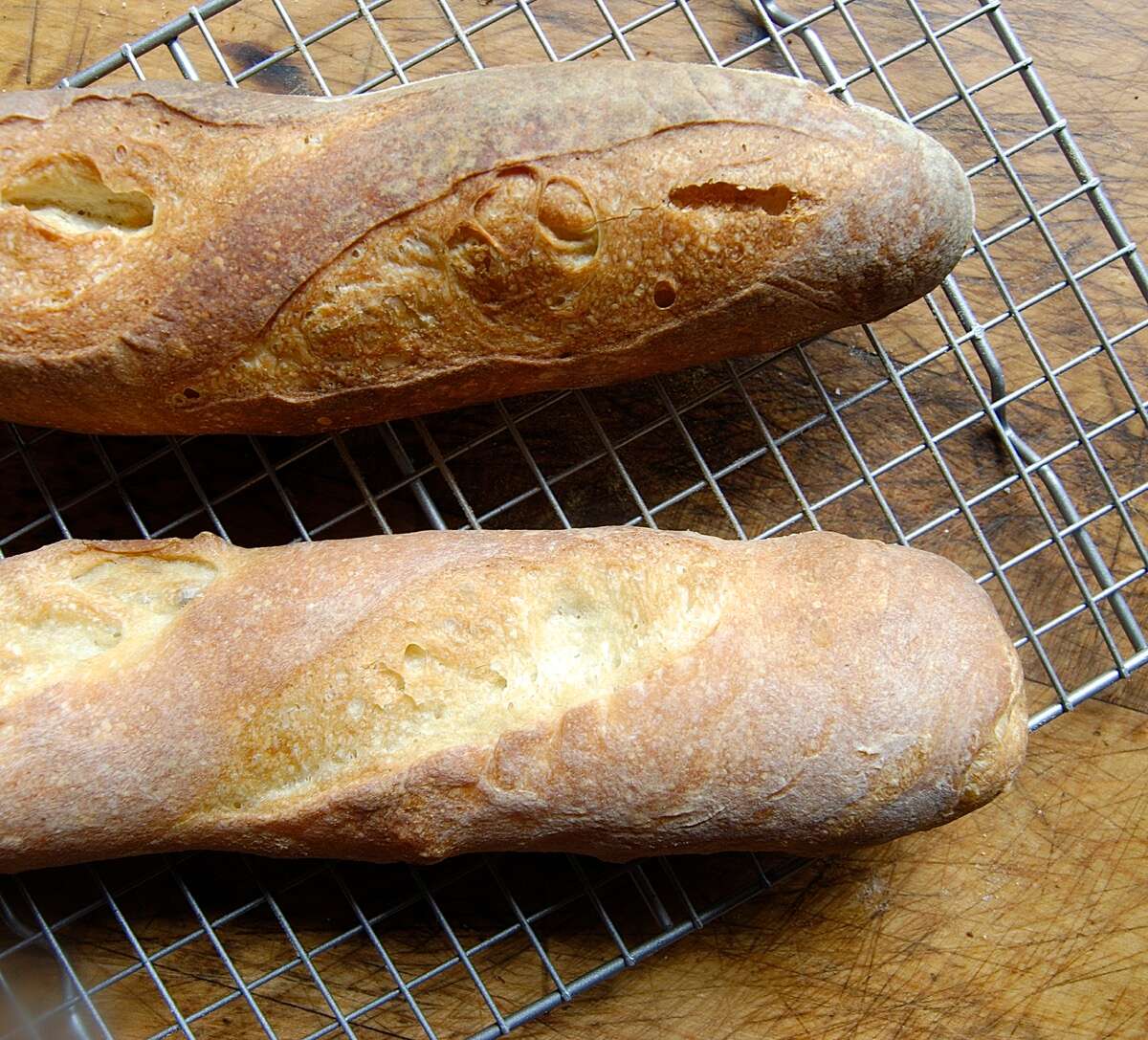 Verdict: You don't need a thermometer to tell if a baguette is fully baked. For best results, simply bake until thoroughly browned. In this case, the color of the crust is more important than the bread's temperature. 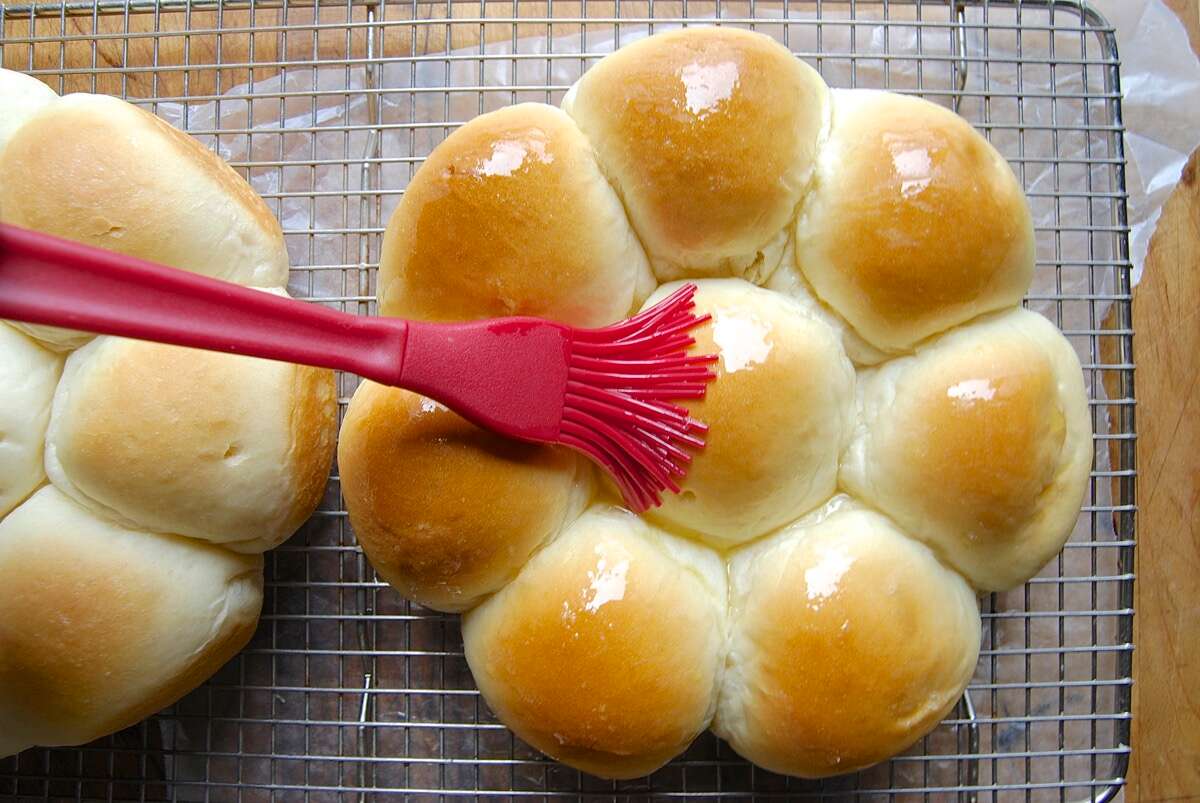 What we learned about using a thermometer with yeast bread:

Using a thermometer with yeast bread is a reliable way to ensure bread is fully baked. Do you take your bread's temperature? Or are you a devoted "thumper"? Share your bread-testing experiences in comments, below.

Doesn't the hole/tunnel that the thermometer leaves bother anyone else? I will temp a loaf the first time I try a recipe, but after that I go by color and the thump. That hole in my bread bothers me a lot.

Hi Roxanne, you're not alone! I totally agree that testing the loaf temperature is helpful the first time I bake a new bread recipe, but after that I tend to rely on color, firmness, and thump.

Wondering at what temperature the oven was at when you baked these bread? Thanks

Hi Peter, you can view the recipes PJ baked in this blog post by clicking on the links provided right below the title photo. Each recipe will specify the recommended oven temperature.

I currently only have a big candy thermometer. Would it be bad to jam that into my bread loaf?

HI Jo,
Yes, that thermometer would be too large for using with breads and other baking.

I cannot open the battery case of my ]Thermapen. Any suggestions?

Hi Elisabeth,
We're sorry to hear about the issues with your Thermapen thermometer. The manufacturer, ThermoWorks, prefers to handle all product inquiries internally, and we’d like to help you get in touch with them directly. You'll find their contact information online, at: http://bit.ly/2y3ttTh . They offer excellent customer service and will be happy to make sure you’re satisfied with your thermometer.

Hi David, we appreciate your kind willingness to offer help in this instance, but different models of Thermapens use different types of batteries and we're not sure what model Elisabeth has. I've included the link you offered, but we still think it's best to contact Thermapen directly.