A reason to celebrate

No, my fingers didn't get lost on the keyboard. This is Gaelic for "Day of the Buttered Bread."

(Or "Day of the Sandwich," depending on which translation tool I use. Any Gaelic-speaking reader out there who can set me straight?)

These days, the Irish celebrate New Year's just like most of us, I imagine – with bonfires and parties on New Year's Eve, a verse of Auld Lang Syne at midnight, and church on New Year's Day.

But 100 years ago and more, when hunger was always just one failed potato crop away, many Irish New Year traditions involved food. Like the rich barm brack (fruit cake) baked especially to be smashed against the door by the man of the house, to banish hunger from the land in the new year. (Luckily, the family was free to gather the pieces and eat them afterwards – apparently in Ireland there wasn't the bias against fruitcake there is here in America!)

In County Cork, crumbs were thrown out the windows and door to prove that no one inside was hungry. Similarly, many families placed buttered bread, or bread-and-butter sandwiches, outside the door on New Year's Day, again to show an absence of hunger. Thus, January 1 and its designation as La na gCeapairi: Day of the Buttered Bread.

Bread and butter might just be my ultimate comfort food. Perhaps it's the Irish in me - my grandfather came to America from Donegal, a county on the wild Irish northern coast.

But maybe it's simply that my mother's homemade white bread was a special treat. Our daily bread was Pepperidge Farm or Sunbeam; but occasionally Mom would break out the big mixing bowl, knead a batch of yeast dough, and bake a couple of plain white loaves. Simple as they were, their aroma, hot from the oven, drew us all into the kitchen, where we'd eat hot buttered bread – much as our Irish ancestors may have, hundreds of years before.

I'm celebrating New Year's this year with a loaf of Irish Raisin Bread. An amalgam of two cultures, Irish and American, it adds raisins and a touch of cinnamon to a simple white/wheat loaf. I figure fruit-stuffed barm brack gives me permission to use raisins, both golden and dark; and combining all-purpose flour with the usual Irish whole wheat lends the bread a celebratory air.

As we get ready to greet another year, let's not lose sight of our past, and the many wonderful cultural traditions we hold dear. Especially around bread, that most venerable of all foods. Bhliain nua sásta!

Let's get started - with a starter.

We find that a simple overnight starter both enhances bread's taste AND its keeping qualities. The short amount of "extra" fermentation raises the bread's acidity level just enough that it stays fresher longer; and the organic acids and alcohol released during that fermentation add wonderful complexity to the loaf's flavor. 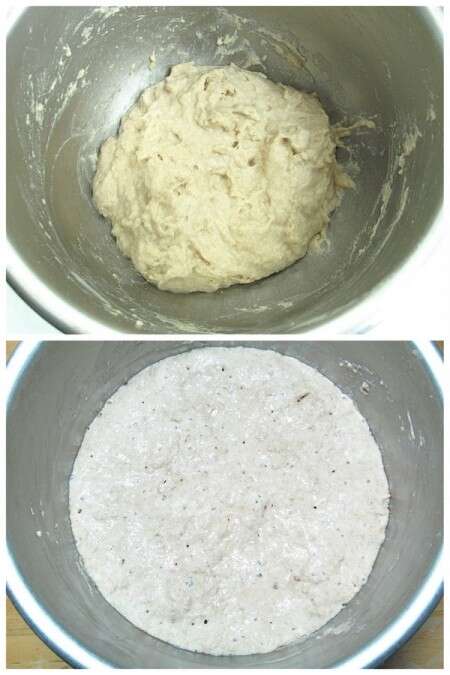 Can you use non-organic white wheat flour? Of course; we like to use organic flour in yeast bread, as it seems to rise better, but regular white wheat is fine.

Combine the flour, water, and yeast, mixing until all of the flour is moistened. Cover the bowl, and let the starter rest overnight (or for up to 20 hours or so), at room temperature; it doesn't need to be placed somewhere warm. It will expand and become a bit bubbly. 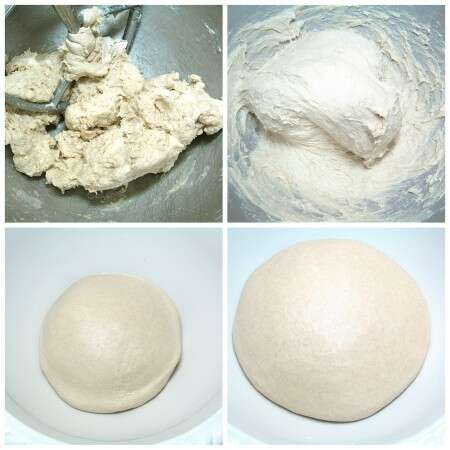 When the starter is ready, mix it with the following:

Mix and knead to make a smooth, soft dough. The dough will seem dry at first, but as you knead it'll soften up.

Place the dough in a greased bowl or greased 8-cup measure, cover it, and let it rise for 60 to 90 minutes, until it's noticeably puffy though not necessarily doubled in bulk. 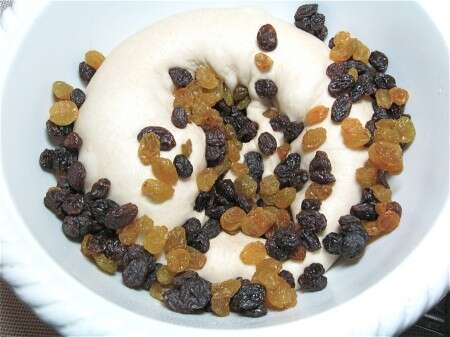 Gently deflate the dough. Knead in 1 cup (170g) golden raisins, dark raisins, or a combination; or currants. Your hands are the best tool here.

If you use currants instead of raisins, you'll have a greater distribution of fruit throughout the loaf, due to currants' smaller size.

How about if you simply increase the amount of regular raisins, for more fruit in each bite? We tried that, and found increasing the raisins slowed fermentation considerably, and also affected the bread's final rise, due to sugar leaching from the raisins into the dough. It made a nice loaf, for sure; but it was denser. If that's what you're after, double the raisins or currants to 2 cups, and bake in a 9" x 5" loaf pan. 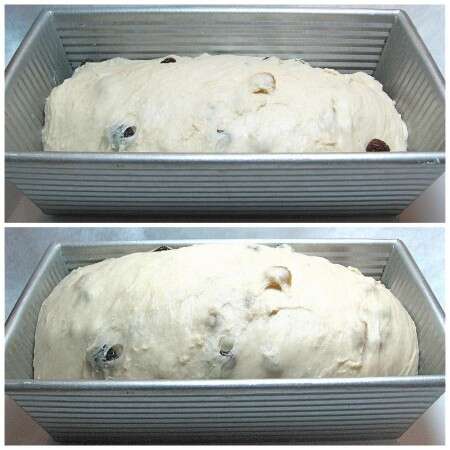 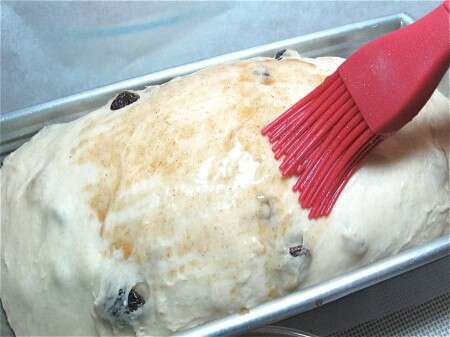 Combine the following, and brush over the loaf:

Now, you can omit this cinnamon topping, if desired; it's not critical, but adds a nice hint of spice. The topping amounts as written make more than enough; we did it that way simply because it's easier to measure a tablespoon each confectioners' sugar and water than 1 1/2 teaspoons each. Drizzle the excess over your morning oatmeal! 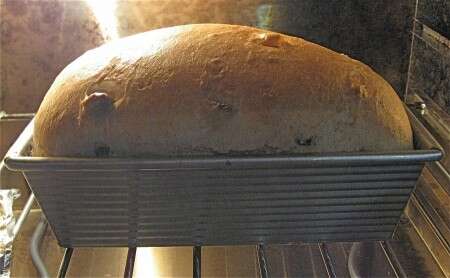 Bake the bread for 20 minutes. Tent it loosely with aluminum foil, and bake for an additional 20 to 25 minutes, until it's golden brown and an instant-read thermometer inserted into the center registers at least 190°F. 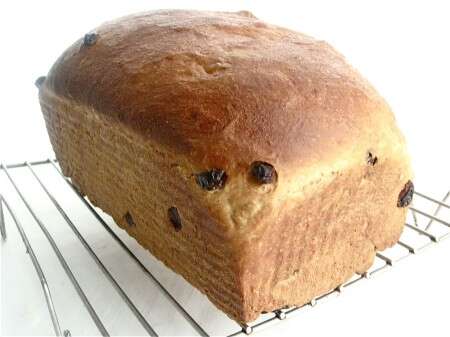 Remove the bread from the oven, and turn it out of the pan onto a rack to cool. 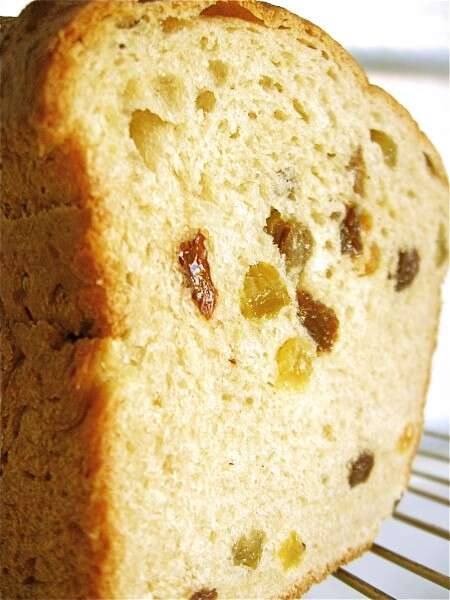 Wrap airtight, and store at room temperature for up to 5 days; for longer storage, wrap well and  freeze. 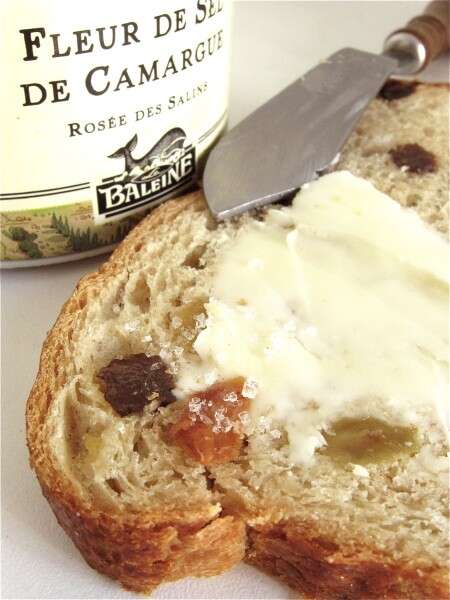 Here's a delicious, traditional way to serve this bread: with a smear of unsalted butter, and a sprinkle of sea salt.

Or simply spread with salted butter, and enjoy. The sweet raisins, rich butter, and touch of crunchy salt play wonderfully well together - my Irish eyes were definitely smiling as I enjoyed this New Year's treat!

Oh, and one more thing: if you find yourself with leftover bread starting to get stale - recycle it. Check out our post, Six ways to use up leftover bread.

We don’t have instant potato flakes and don’t have a need for potato flour but we do have potatoes. Do think substituting some amount of (boiled?) potato for the potato flour/flakes (plus perhaps some of the water) would be successful? If yes, what quantity would you suggest?

Hi Bruce, our article, How to Substitute for Potato Flour would be very helpful.

Hi, I used an Irish Barmbrack recipe using a sourdough starter. The recipe called for soaking 12 oz. of raisins in tea for two hours.(Raisins are drained before adding to dough.) Having read your recipe about the raisins and how the sugar from the raisins inhibit the dough rise, I thought maybe this is why the raisins are soaked --to remove the surplus sugar from the raisins.? What do you think? I got a nice rise using the sourdough starter but I had to cut the last fermentation time to finish the project before midnight! and so I could not taste the sourdough flavor.
Great question, June! Soaking raisins can improve the rising time for a different reason. When you soak your raisins, you're rehydrating them. This will prevent the raisins from possibly absorbing liquid from your dough. The dryer the dough is, the longer it will take to rise. Now, if you'd soaked the raisins in a sugar syrup rather than tea, the sugar may have inhibited things, but it looks like you've found a great method for a wonderfully flavorful loaf. The sourdough will add a lovely tang next time! Annabelle@KAF

This Japanese lady I buy it from at our local farmers market soaks hers in rum. Delicious

I think the recipe for the starter must be incorrect. If you mix 1cup of any type flour with 1/2 cup water it is far too thick and looks nothing at all like the picture of the starter. I checked other KAF recipes for breads starting with a soaker and they start with 1/2 cup flour to 1 cup water, so I think the proportions were reversed. I started the starter tonight and it 'seems' right with 1/2 cup flour and 1cup water and1/8 tsp yeast. I can adjust the amount of flour and water tomorrow, but I'm really wondering if that 1/8 tsp yeast will be sufficient. Worried a bit, cause all those raisins and currants are a bit expensive and I'd hate to have to bin the final result.
Linda, the portions in the starter are correct as written. It sounds like you might be scooping your flour directly from the bag, which compacts it into your measuring cup. To ensure you're using the right amount, we recommend either measuring your flour by weight using a scale, or fluffing and sprinkling the flour gently into your measuring cup one spoonful at a time before leveling off with a knife. This will help you measure light cups of flour that weigh about 4 ounces per cup, and the starter should be like thick pancake batter. (If you look at the weight of the ingredients by clicking on the "ounces" button, you'll see that the starter is made up to equal parts flour and water by weight—4 ounces of each.) We hope this helps explain! Kye@KAF
Made starter, too thick KA suggested too much flour, remade starter. Next day, why is mine brown and yours is white. Looked something like yours so went ahead and made the dough. Still brown looking not like PJ's. 60 min. Into proofing and looks same. Will go for 90, what the heck, will add raisins, and make the loaf but think this is a lost cause. Did so want this to work.
Your starter may have changed color a bit during its overnight rest depending on what type of flours you used and how much air was allowed to get to it; the good news is that unless it has a brownish or grey liquid surrounding the starter, you should go ahead and add the starter to recipe with gusto! If you've been getting varied results with this recipe (and perhaps others), we can't recommend weighing your ingredients out with a scale more highly. Either measure by weight or gently spoon your flour into your measuring cups for best success. Who knows, MCelen, your bread could come out of the oven and taste like Irish Raisin deliciousness! Fingers crossed. --Kye@KAF
Hi PJH, I ran out of raisins and currants but I have huge bag of dried cranberries. Am just wondering if cranberries would work or would they be too heavy and not be evenly distributed?

How to use whole wheat flour in quick breads

It's a simple switch