As Thanksgiving approaches, it’s time to plan your pies and research your rolls. Here at King Arthur, we’ve been sharing beloved holiday recipes for years, many of which have become family staples on tables throughout the country. To help you prepare, here are our most popular Thanksgiving recipes, according to our readers and customers.

After a rich, heavy feast, why not cap things off with a light-as-air pie? This beauty takes cranberries from the saucepan to the pie plate, transforming them into a tart, delicate filling. Rachel from Tennessee served it at her meal last year and says, “Everyone declared this the winner of our Thanksgiving feast.”

Some pecan pies are way too saccharine, but according to Jon in Nevada, this brown-sugar-sweetened pie has “just the right level of sweetness and flavor.” An added bonus? He says it’s also easy to make. If you’re looking for a reliable recipe for this holiday staple, this is it.

We’re all always searching for the ideal pumpkin pie, but customer Beth from Georgia says she’s found it, pronouncing this recipe “perfect.” Make the custard the night before; not only is it a do-ahead trick, but it also gives the spices more time to infuse, resulting in a more full-flavored pie.

This pie has something going for it that none of the others here do: It’s an award-winning recipe. Caterina in Pennsylvania entered it into a local pie contest, where it won both the People’s Choice and Judges’ Selection awards. With its inspired combination of rich cheesecake and spiced pumpkin layers, its victory is no surprise. And we’ve since updated this recipe to be even tastier with a spiced gingersnap crust.

There are nearly as many apple pie recipes as there are bakers, but this one has become a go-to for many come holiday time. There’s nothing groundbreaking about it (no secret ingredients here, unless you count the optional but highly recommended boiled cider) but it perfectly calibrates the right amount of spices, sweeteners, and thickening agents for the ideal filling. Steve from Texas concurs: “This will be the recipe I use from now on.”

Chocolate is always welcome, and adding this cream pie to your Thanksgiving spread is sure to satisfy anyone who doesn’t care for pumpkin or apple pies. The filling is rich and creamy, with an ethereal cap of whipped cream to complement. It’s also reliable: Alli in Tennessee says she’s made this pie several times, and “it’s always turned out great.”

The best Thanksgiving pie might just be the one you eat on Black Friday. If you have a ton of leftovers, sandwich them in a sturdy hot water crust for a savory pie that keeps the feast going days later. Jennifer in Oregon tried this recipe after it debuted last year and declared that it’s “now a tradition.”

The hunt for a reliable, tender, flaky, and tasty pie crust can be exhausting. But the search ends here: Karen in Virginia says this double pie crust “comes out tender and flaky every time.” It’s now her go-to recipe — try it this year and it may become yours too.

Scared of rolling pins? Try a no-roll crust instead. Keith in Illinois says it’s “a great place for any pie baker to start if they are intimidated by or frustrated with traditional butter pastry.” Instead of rolling out the oil-based dough, you simply press it into the bottom and up the sides of the pie pan.

Because they don’t have gluten to help form structure in the dough, gluten-free pie crusts can be a challenge. But this recipe — made with Gluten-Free All-Purpose Flour — eases any anxieties. When she made it, Rachael in Pennsylvania said it was “flaky, delicious, and added to the overall flavor and texture of the pie,” declaring it the best gluten-free pie crust she’s ever made.

What makes the perfect Thanksgiving roll? C. in Illinois says it must be “buttery, pillowy, and delicious” — plus require minimal cleanup. Handily, Parker House Rolls check all those boxes. Their secret is a buttery fold during the shaping process (plus even more butter brushed on after they're baked), for super-soft texture and ultra-rich flavor.

If you’re more into crispy, crusty bread, then these European-style rolls should be your first choice. They’re simple to make, but do require a significant amount of proofing time, so plan accordingly. That waiting time is worth it, though: It develops plenty of flavor in the bread, plus provides some handy breaks along the way to prep the rest of your Thanksgiving dishes. (And they’re so good, you can make them all year long. Ash in Ohio says, “I make them every week now!”)

These rolls round out the breadbasket with a heartier, more flavorful carb option thanks to the inclusion of oats, brown sugar, and honey. Not to mention, they’re a cinch to pull together: Amaatta in Illinois shares, “I had my 9-year-old daughter literally dump all the ingredients in a bowl and we hand-mixed and kneaded the dough. We started at 3 p.m. and were eating them for dinner.”

If you’re more of a beginner bread baker, try these Amish Dinner Rolls. They take about three and a half hours from start to finish, and they’re reliably soft thanks to the inclusion of mashed potatoes. Customer Rich, in California, dubbed them an easy recipe to follow and a crowd-pleaser for his whole family — a true win-win.

For bakers with a lot of mouths to feed, we have these Big Batch Quick Dinner Rolls. Their virtues are in their name — they make a lot of rolls in little time — but economy isn’t their only calling card. They’re also “so soft,” according to Carli in Iowa.

“You’ll never need another recipe because this one is foolproof,” says Janice in Washington. That’s largely due to the tangzhong starter in the dough, which involves cooking flour and water on the stovetop to pregelatinize the starches and add more moisture to the dough. As a result, these rolls stay softer longer — they can even be made a day in advance if you’re looking to start your Thanksgiving baking early. Use any leftovers to make terrific turkey sliders.

Sometimes, all you want is a classic and simple soft white dinner roll. In which case, you should bake this straightforward recipe, which Kristi in Maryland says is “super easy to make and super easy to knead by hand,” in case you don’t have a stand mixer. The addition of dried milk powder and dried potato flakes ensures these rolls come out pillowy soft and tender every time.

For those who prefer their pumpkin outside their pie, there’s this impressive Bundt cake, which Alyssa in New Jersey calls “a showstopper” and “a Thanksgiving delight.” With a hidden swirl of coffee-flavored filling, this stunning cake adds an extra dimension to your holiday table.

If apple pie feels like too much effort or time to make, try this classic apple crisp instead. Danyelle in Massachusetts made it when she ran out of time to make pie dough and says, “My family loved it and didn’t miss an apple pie at all.” Its crunchy brown sugar topping blankets a gooey filling of warm baked apples for a comforting, rustic dessert.

Holiday dessert flavors are dominated by favorites like pumpkin, apple, and sweet potato, but expand beyond that list to add tart cranberries to the mix. This dessert is nearly more cranberry than cake — a cobbler-like bake that puts the tart fruit at the forefront. It also makes excellent leftovers; Hayley in California says, “We ate it for breakfast over Thanksgiving and it was gone in a couple of days.”

Thanksgiving Day breakfast is tricky. You want something celebratory to kick off the festivities (and maybe impress visiting family members). But at the same time, you don’t want to fill up too much before the big meal later. Enter: these Thanksgiving Muffins. With pumpkin, spices, and dried cranberries, they’ll put you in the holiday spirit without leaving you stuffed (that comes later!). Plus, they can easily be made in large batches to feed a crowd. As Judith from New Hampshire says, “This recipe is definitely a keeper.”

For more help preparing for the holidays, see our Thanksgiving Baking Guide. 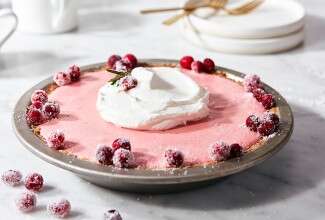 The cranberry chiffon pie looks delicious. I want to do some different things this year. The pies and rolls are a great start.

You left out one of our favorite Thanksgiving rolls! Your Golden Pumpkin Dinner Rolls!
It wouldn’t be Thanksgiving without these delicious rolls not only with dinner but for turkey sandwiches later on or next day!