It SHOULD have been a piece of cake...

Ah, blueberry crisp: ideal for Mother’s Day. A simple recipe anyone can make. No rolling dough, no scary knife work, no fancy techniques. Just 1) mix, 2) pour, and 3) bake. Or so I thought.

Two weeks and about 39 versions of blueberry crisp later, I have one I like. And I also feel like a tornado picked me up and whirled me around and finally deposited me, upside down, miles from where I started.

Baking ideas are like that; they can fool you. The flaky pastry that looks like it requires a CIA degree turns out to be a no-brainer. And the simple fruit crisp—berries on the bottom, streusel on top—becomes a multi-headed monster, finding a different way to fail every time it’s baked.

Mind you, my co-workers here at King Arthur Flour didn’t deem any of the “no-pass” versions a failure. Each and every one was eaten with gusto. Still… none was exactly what I wanted. And what, pray tell, was this lofty goal, the shining ideal of blueberry crispdom? Berry filling that was EXACTLY the right consistency: not stiff and rubbery, not a puddle of berry-filled juice, but soft enough to barely ooze when cut. The crisp had to be crisp, but not hard; and it had to stay heaped on top, not sink into the berries and become doughy.

And, since the point was to make an EASY recipe for Mother’s Day, something that anyone in the family who knows how to turn on the oven and find a mixing bowl could make: the thickener had to be flour, and the filling made from frozen (not fresh) berries, since both are pretty much universal ingredients.

Though it didn’t turn out to be QUITE as simple as I’d hoped, this blueberry crisp is still pretty much 1) mix, 2) pour, and 3) bake. There’s some microwaving involved: melting butter, thawing berries. You do have to stir together both the filling, and the topping. But other than that, I’d reckon it’s something most people could do, even those whose only previous exposure to baking has been to unwrap and slice an Entenmann’s coffeecake.

So, all you moms out there—if your family wants to bake you something for your special day, point them to this easy Blueberry Crisp, then clear out of the kitchen. Go read a book; catch some rays in the yard. Your mission, should you choose to accept it, is to buy a pint of vanilla ice cream and have it ready when it’s time to add “à la mode” to your family’s Blueberry Crisp. 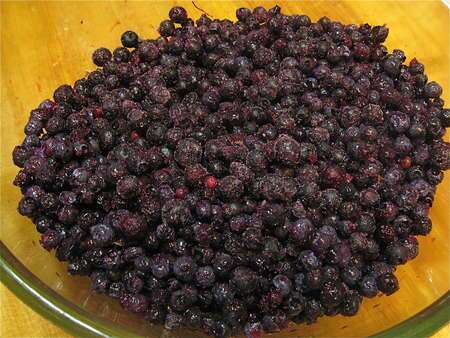 First step: frozen blueberries. Dump them into a microwave-safe bowl. If you want to make this recipe with fresh berries, try our recipe for Summer Fruit Crisp, substituting blueberries for the peaches. 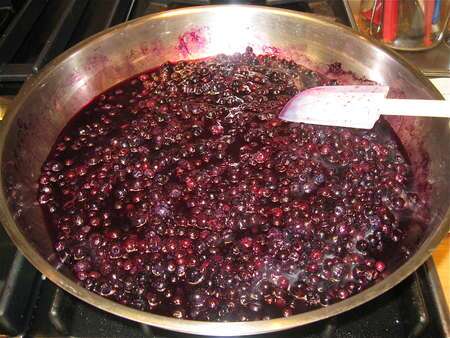 Next step: NOT THIS! I thought, hey, why not simmer off all the excess juice first. Not only will it concentrate the flavor, it'll cut down the baking time—I thought. 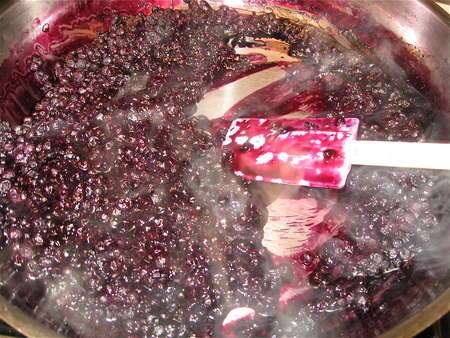 Great! After a 35-minute simmer, almost all the juice had been absorbed. One problem: it still had to get its streusel on top and be baked. And there was so little juice that when it came out of the oven, it was dry and gluey. Plus, simmering for 35 minutes prior to baking isn't really saving much time or energy. Back to step one: frozen berries. 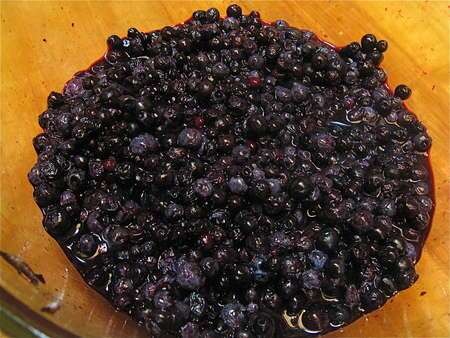 This time, I microwaved them for 5 minutes, just enough to thaw them and bring them to room temperature. 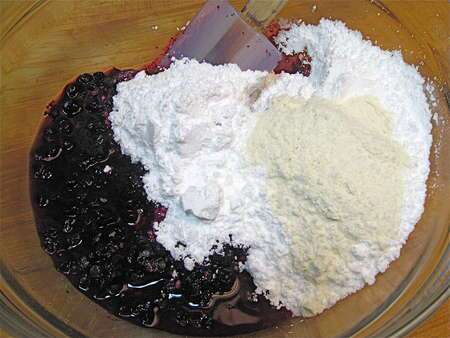 Stir in the remainder of the filling ingredients: confectioners' sugar (the starch acts as a thickener), flour, spices, lemon juice, almond and vanilla extracts, and butter. Butter may seem like excess baggage here, but I've found that just a couple of tablespoons helps enrich the flavor and texture. 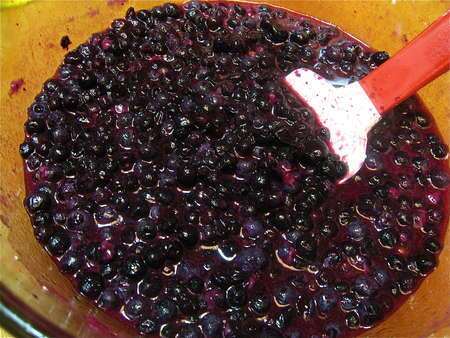 Stir it all up, spoon it into the pan, and into the oven it goes for 30 minutes, sans topping. How come no topping? Because I found that if I applied the topping immediately, it melted into the berries as they simmered. So I figured, let the berries cook awhile, THEN add the topping. 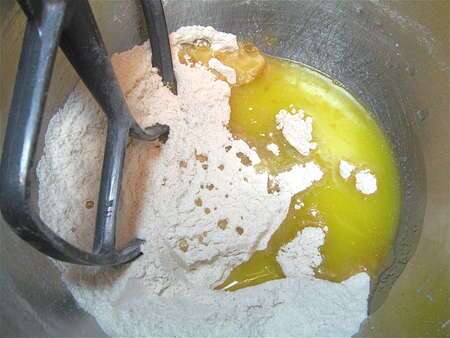 This is my favorite crumb/streusel topping. It differs from the norm in that you melt the butter before combining it with the flour, sugar, and cinnamon. 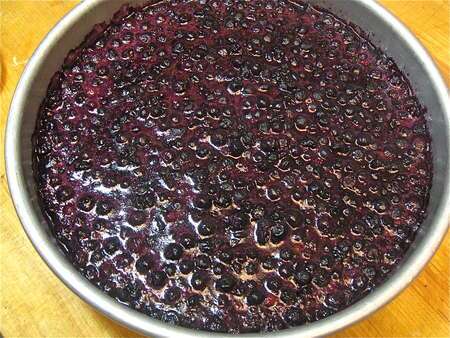 The berries have baked for 30 minutes, and they've started to bubble. If this was YouTube, you'd be able to see it. Since it's not, you'll just have to take my word for it. 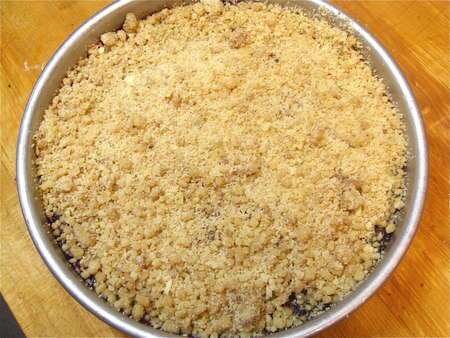 Spread the streusel evenly over the berries, and return to the oven. 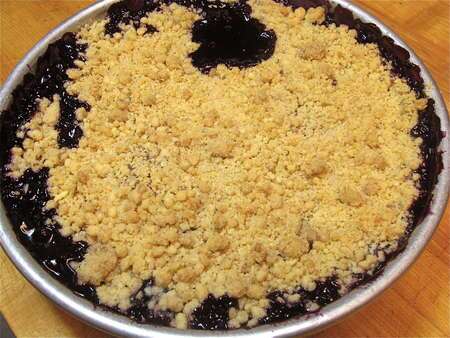 Bake for another 45 minutes. The berries will bubble vigorously and flow up over the filling in spots. That's OK; you're going to be dishing this into individual servings anyway. If you serve the crisp immediately, it'll be very liquid-y. I prefer to let it rest for several hours, preferably overnight. The berries re-absorb a lot of the juice. 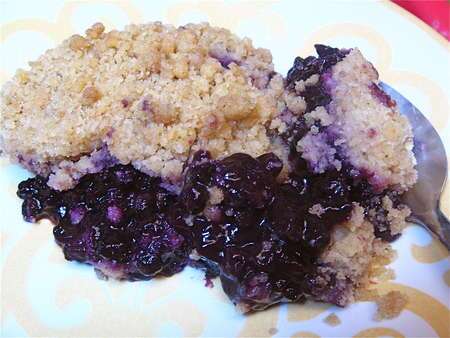 Next day, reheat each serving briefly (about 20 seconds) in the microwave. And there you have it: good old fashioned blueberry crisp. Make it à la mode at your own risk! 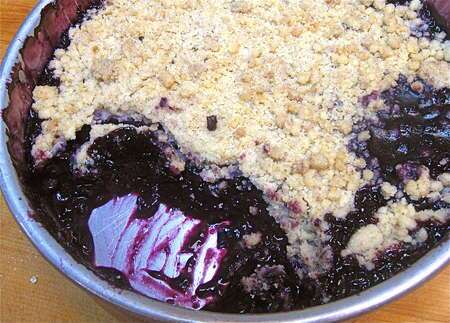 Now here's the result I was really hoping for: blueberry crisp without the puddle of juice in the bottom of the pan. Success!

So glad I found this recipe! No more watery berries or disappearing crumbs! Great recipe!

I made the blueberry crisp yesterday. I let it sit for 12 hrs. Little too much liquid. I think it was caused by the melted butter which might have been to hot. Still delicious.
Just made this crisp today and it was the best of the best. I never added butter to the berries - but followed recipe exactly and it had a nice flavor. Also never baked berries first and then add topping - but it worked. My husband said this is the best crisp and I said “of course it is - it came from KAF. This is a keeper!!!
List of ingredients, please!
This blog cites two crisp recipes: OR . We hope one of these matches your idea of the perfect seasonal fruit crisp. Happy Baking! Irene@KAF
I'm one of those folks that dislike my crisp with juice running all over the place. I tried this method yesterday. The fruit was perfect: slight amount of juice, not too thick - just thick enough to meld with ice cream, and just sweet enough. My problem was the 'crisp' part. When I added the topping, it sunk. Still delicious, but not quite the presentation I was looking for! I did switch to an oat/flour/sugar topping. Could it have been too heavy?
If you are not using Instant Clear Jel in your filling, then the fruit mixture may need to be baked for longer than 30 minutes before putting the topping on. Try baking for 45 minutes before sprinkling the topping on and then baking for an additional 30 minutes, which should help the fruit set up more and keep the topping afloat. If you are using an oat/flour/sugar topping, you can also try baking the topping on a cookie sheet and then sprinkling it on the crisp right at the very end of baking--just for the last 5 minutes. This will ensure a nice crunch to your topping and will prevent it from sinking to the bottom. Good luck and happy baking! Kye@KAF
I just made this using blueberries I grew and froze last summer. I used a glass baking dish, 8x8 and a little over 2" high. Good thing! The blueberries bubbled right up to the edge. I added 8 minutes to the cooking time because it wasn't bubbling in the center at all by the end of the 30 plus 45 minute published cook time (and the crush wasn't looking quite done). When it was time to serve it, it was very juicy (runny juice) and didn't hold together at all. The topping was anything but "crisp". Lastly, the flavor didn't taste very blueberry -- I think the allspice is too overpowering for this dish. Very disappointed.
Sorry this didn't work out as planned, Wendy. It's difficult to gauge the amount of thickener any particular fruit will need, especially berries; they can vary region to region, crop to crop, so it's an educated guessing game. A couple of things: make sure to let the crisp cool completely before serving; it'll thicken as it cools, and if you want to serve it warm, rewarming a completely cooled crisp is more effective than serving it warm from the oven. Also, you can cook the berries halfway (or even more) atop the stove before assembling them into a crisp. This allows you to see exactly how much juice they'll exude, and might inspire you to adjust the thickening. Thanks for giving us your feedback here - PJH

I believe using frozen blueberries could have caused it to be runny.