Water: the foundation of life, the substance that comprises 70% of our planet, and the thing that makes chocolate cakes even more chocolatey.

That’s what Senior Recipe Developer Molly Marzalek-Kelly and the rest of our Test Kitchen discovered while on a recent mission to develop our new Chocolate Pound Cake recipe. Thanks to water, you’ll get chocolate flavor that’s “a little bit richer and a little bit stronger,” says Molly. “And that’s going to win across the board.”

Why water is actually better than milk

The team originally started making their new recipe with milk, a natural instinct. It’s the liquid called for in our Original Pound Cake, which is the foundational recipe they were starting from, as well as most cakes in general. Milk’s fat and protein add tenderness, structure, and flavor to a cake — all great attributes you want in your baking!

But there was one key difference between that Original Pound Cake recipe and the new one Molly was developing: chocolate. And when it comes to chocolate desserts, especially cakes, there’s really only one goal: maximize the chocolate flavor as much as possible. Turns out, that’s the one thing milk isn’t good at. Its added flavor muddies the pure, clean taste of chocolate. As Molly explains, “With milk, there’s a little bit of sweetness, a little bit of sourness, so there are some other contributing flavors present there. Which, in the case of chocolate cake, kind of works against it.”

Molly turned to water instead, based on a tip that Director of Research and Development Sue Gray shared during recent work on the recipe for Cookies and Cream Cupcakes. “Water is neutral, so there are no other flavors,” Molly says. As a result, it “really made the chocolate flavor pop” since it wouldn’t compete with the cake’s cocoa powder.

When Molly tested the water-based cake against one made with milk, the results were clear: Water, not milk, was the best way to get maximum chocolate flavor. “When you’re having them side-by-side, it’s very noticeable,” according to Molly. She notes that the differences are subtle enough that if you’re not eating the cakes together, you might not pick up on the improved flavor. “But if you’re a chocolate fan,” she stresses, “who wouldn’t want a little bit more chocolate flavor? Nobody.”

Plus, there was one additional bonus: The water-based cake had a longer shelf life. “It’s not something that would be perceivable unless you had them side-by-side, but on day two, the water-based cake definitely tasted like it did the first day, whereas the milk-based cake was already a bit drier,” Molly recounts.

Ultimately, this is a tiny but mighty element that’s subtle, yet improves a recipe — which shows the thought, care, and detail that our Test Kitchen puts into every aspect of recipe development.

What about coffee in chocolate cake?

If you peek at the final recipe for that Chocolate Pound Cake, you’ll see that it not only calls for water, but also lists coffee as an option.

To choose, think about what kind of chocolate taste you’re going for: Do you want a complex, rounded flavor with multiple notes? Pick coffee. Do you want pure, unadulterated chocolate? Water’s your best bet.

Can you swap water into any chocolate cake recipe?

This isn’t something Molly has tried, but she advises that as long as the cake is flavored with cocoa powder (as opposed to another form like melted chocolate), then using water in place of the recipe’s milk should work just fine. Her one hesitation is if the cake calls specifically for buttermilk since that’s likely contributing to the cake’s leavening and rise.

Now if you stumble across a chocolate cake recipe that calls for either milk or water, like our Devil’s Food Cake, you’ll know the ramifications of choosing one or the other. And if you want to recreate Molly’s testing and make both versions to compare side-by-side? It’ll mean a little more baking education and a lot more chocolate cake in your life — both very excellent things.

See how water allows chocolate to shine in our recipes for Chocolate Pound Cake, Cookies and Cream Cupcakes, or Dark Chocolate Cake. 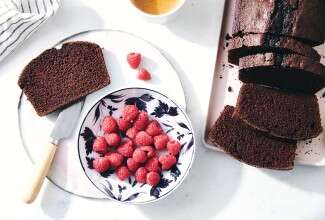 What about the chocolate cake that calls for milk and coffee/water. It calls for 1 cup milk and 1/2 cup coffee or water. Do you use 1 and 1/2 cups water if you don't want to use coffee?

Hi Maureen, if you do not wish to add coffee you can still add 1 cup of milk plus 1/2 cup of water. Happy Baking!

Even better, use hot water to bloom the cocoa, like my favorite brownies.

I agree with Cherryl about using coffee instead of water.

I absolutely love chocolate, and the use of hot coffee in a cake recipe results in an amazing taste, because coffee enhances cocoa and takes it to a new level. I have a chocolate cake recipe that calls for 3 cups of liquid: 1 cup of oil, 1 cup of milk, and 1 cup of freshly brewed coffee. I’ve used this recipe since 1989 and everyone who eats it falls in love with the cake. I’ve tried others but this surpasses ANY chocolate cake recipe I’ve ever had.

Since I cannot do dairy, I have used water in place of milk for decades in all of my baking. It even works well for GF baking.

Hi, this sounds great, especially for my chocolate-loving self. You state "Milk’s fat and protein add tenderness, structure, and flavor to a cake", but don't mention those attributes when substituting water. The flavor differences are "subtle", but what about that important texture and tenderness? Is that also merely a subtle difference?

Hi Joy, in the absence of milk, other forms of fat and the protein in eggs can still produce a lovely cake texture.