How to bake your best rye loaves ever

Have you ever wanted to bake a loaf of rye bread, but felt too daunted to give it a try? These tips for making rye bread will leave you feeling dauntless in no time.

Baking rye bread uses all the same basic techniques you'd use when baking a standard all-purpose flour loaf. You just need to manage your expectations: if you understand how rye flour dough acts – which is different than dough made with all-purpose or bread flour – you're more likely to be happy with your results.

Whether you want to make nut-and-fruit studded pecan-raisin rye; a light, caraway-studded sandwich loaf; dense pumpernickel bread for hors d'oeuvres, or richly flavored sourdough rye, we have the recipes you need; and after reading this post and practicing with a few loaves, I guarantee rye bread will intimidate you no longer!

Tip 1: What kind of rye flour should I use?

White or light rye (they're the same flour, different names) is the rye equivalent of all-purpose flour. It's milled from the center (endosperm) of the rye berry, but doesn't include the oily germ at the very center, nor the fiber-rich bran that forms the berry's outer skin.

And how about pumpernickel, a.k.a. whole rye flour? It's rye's version of whole wheat flour, including bran, endosperm, and germ: the entire rye berry. 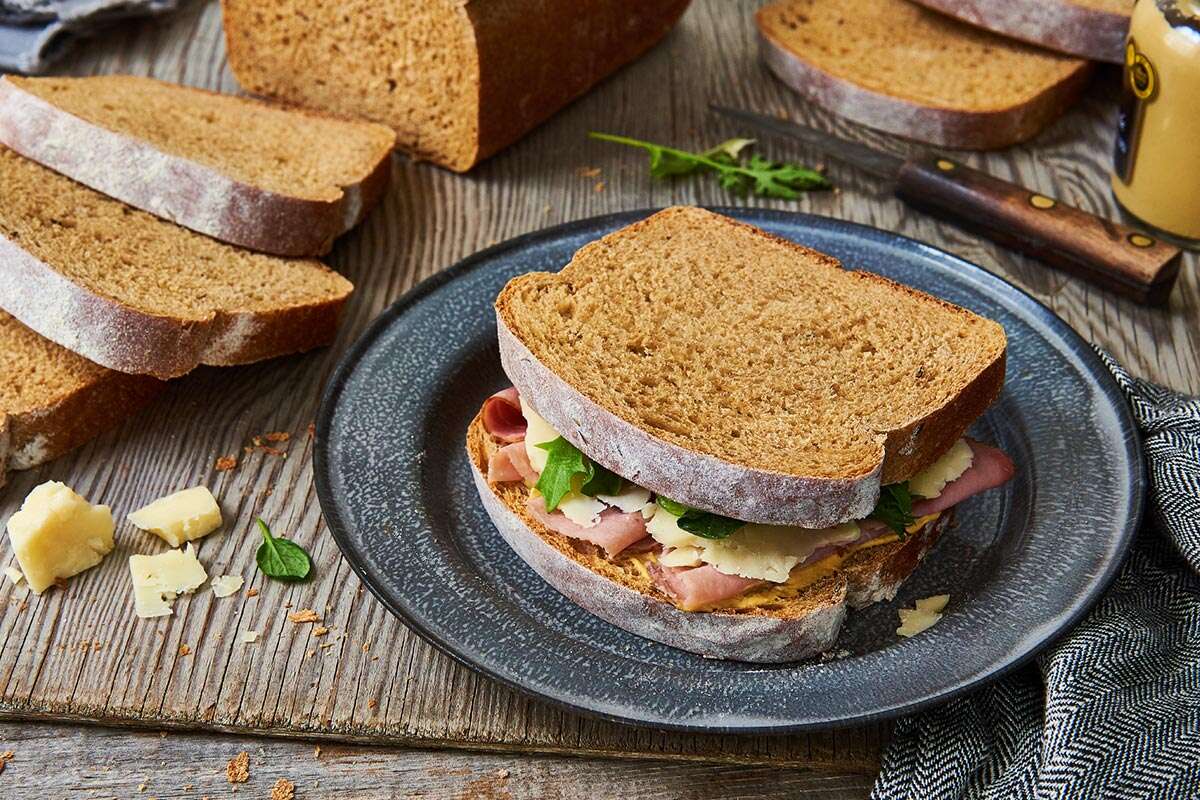 Which should you choose? White/light rye, without any trace of bran, will give you the lightest-colored, highest-rising bread. As you go from white to dark to pumpernickel, your bread will become slightly darker, and will naturally rise slightly less. The Double Light Rye Bread pictured above is made with about 44% pumpernickel flour; as you can see, its color is a rich, warm light brown. And, since its rye flour is supplemented with all-purpose flour, its texture is light, as well.

For high-rising rye breads, use "white flour" – unbleached all-purpose or unbleached bread flour –  in combination with rye. The extra protein in either of those wheat flours balances the lack of gluten-forming protein in rye flour – as does vital wheat gluten, a couple of tablespoons of which can be added to rye flour dough to help it rise.

Rye bread made with 100% rye flour will be dense and heavy; think some of those all-rye breads you find at artisan bakeries, the ones sliced off an enormous loaf and sold by the pound. If you're looking for a lighter, softer sandwich bread, bread or AP flours are your best friend. And the higher percentage of rye flour in your recipe, the more you should lean towards higher-protein bread flour.

How much white flour should you use? The more white flour in the loaf, the higher it'll rise and the lighter its texture will be. So this is entirely up to you and your tastes. Experiment with different percentages of white flour/rye flour until you find the bread texture you like the most.

Like most recipes, our Chewy Semolina Rye Bread is a combination of rye and wheat flours: in this case, pumpernickel, bread flour, and semolina, a coarse flour milled from high-protein durum wheat.

In a large bowl, or in the bucket of your bread machine set on the dough cycle, combine the following ingredients:

Mix, then knead — by hand, mixer or bread machine — until you've made a smooth, slightly sticky dough. 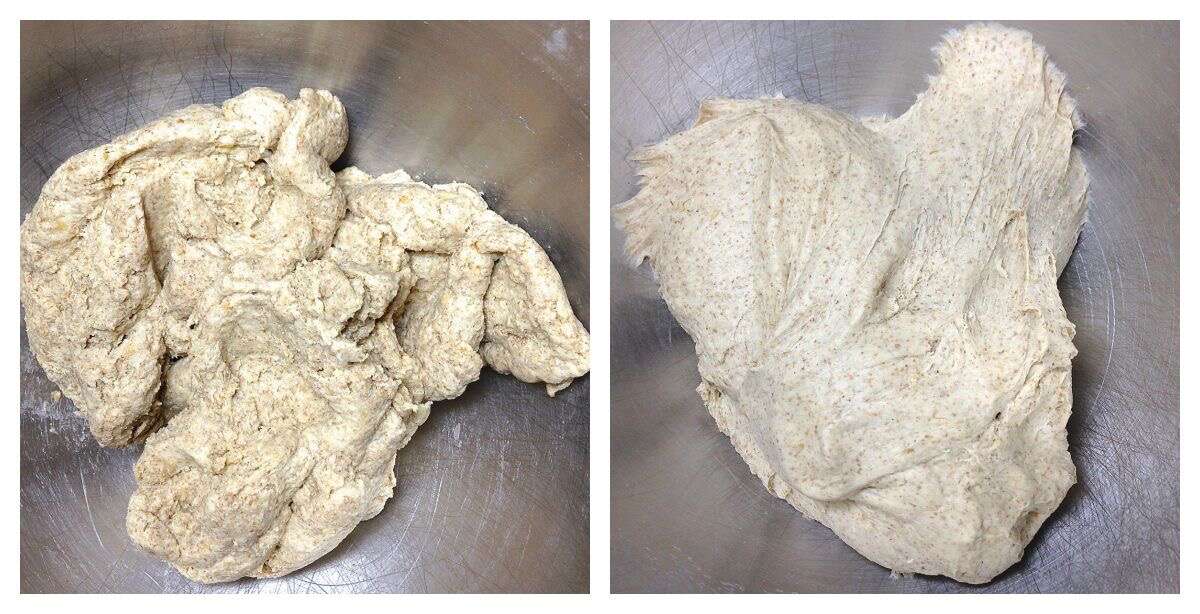 If you've never made rye bread before, you'll be surprised by the dough's consistency, especially if you're making a loaf that's at least 50% rye flour. The dough is more clay-like than elastic (left, above); this is fine. Don't try to "knead it into shape." It will never become as "supple" as a typical wheat-based dough. Even when fully kneaded (right, above), it probably won't form a smooth ball; you'll need to shape it into a ball prior to its first rise.

Shape the dough into a ball, place it in a lightly greased bowl, cover the bowl, and let the dough rise, covered, for 1 hour. It should become nice and puffy. If you're using your bread machine, simply let it complete its dough cycle. 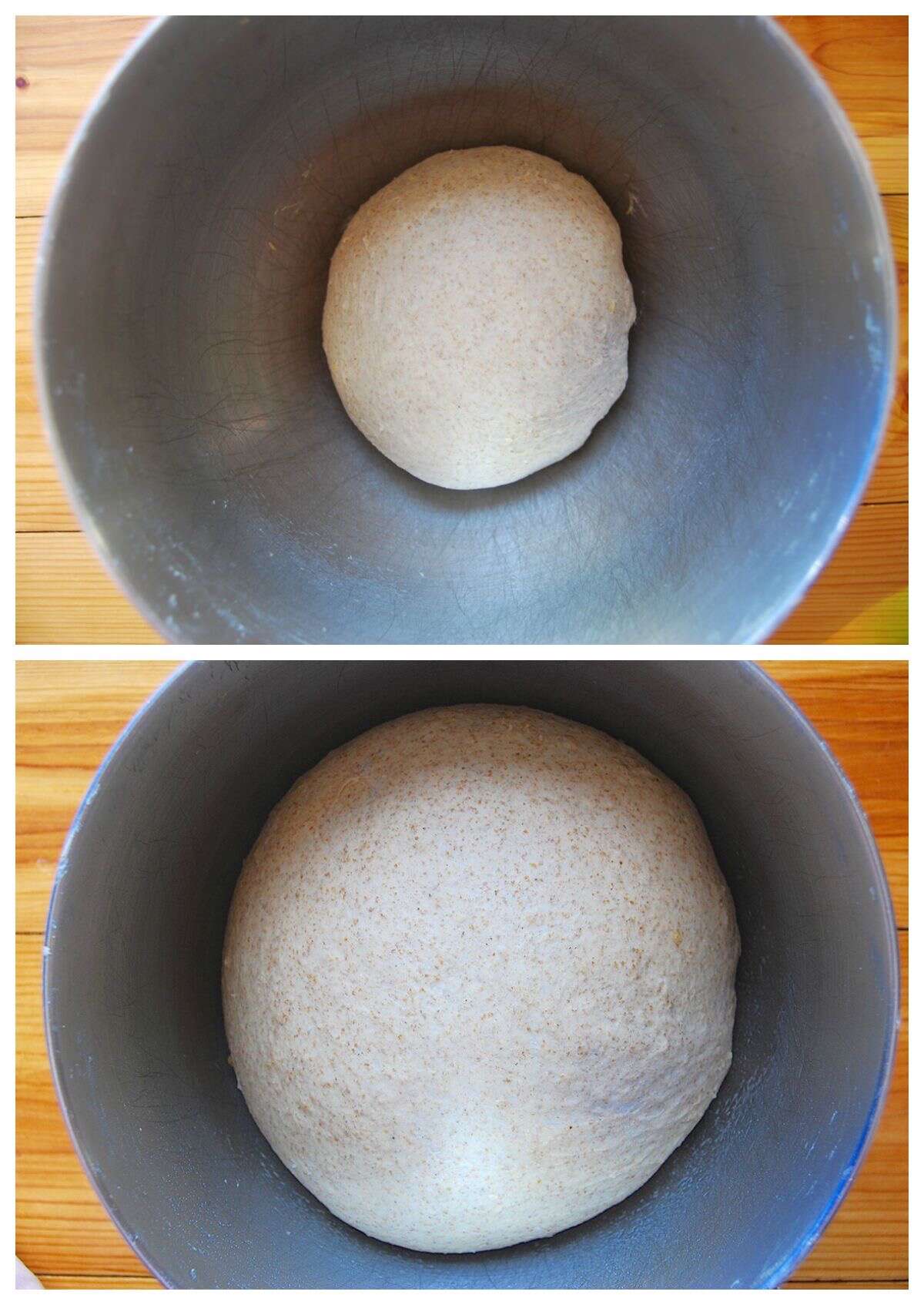 Tip 4: The more rye in your dough, the more slowly it will rise.

The loaf above is only about 28% rye flour, so it rises vigorously. Breads that include a greater percentage of rye may take hours to rise, both in the bowl, and once they're shaped into loaves.

Your mission, should you choose to accept it: relax. 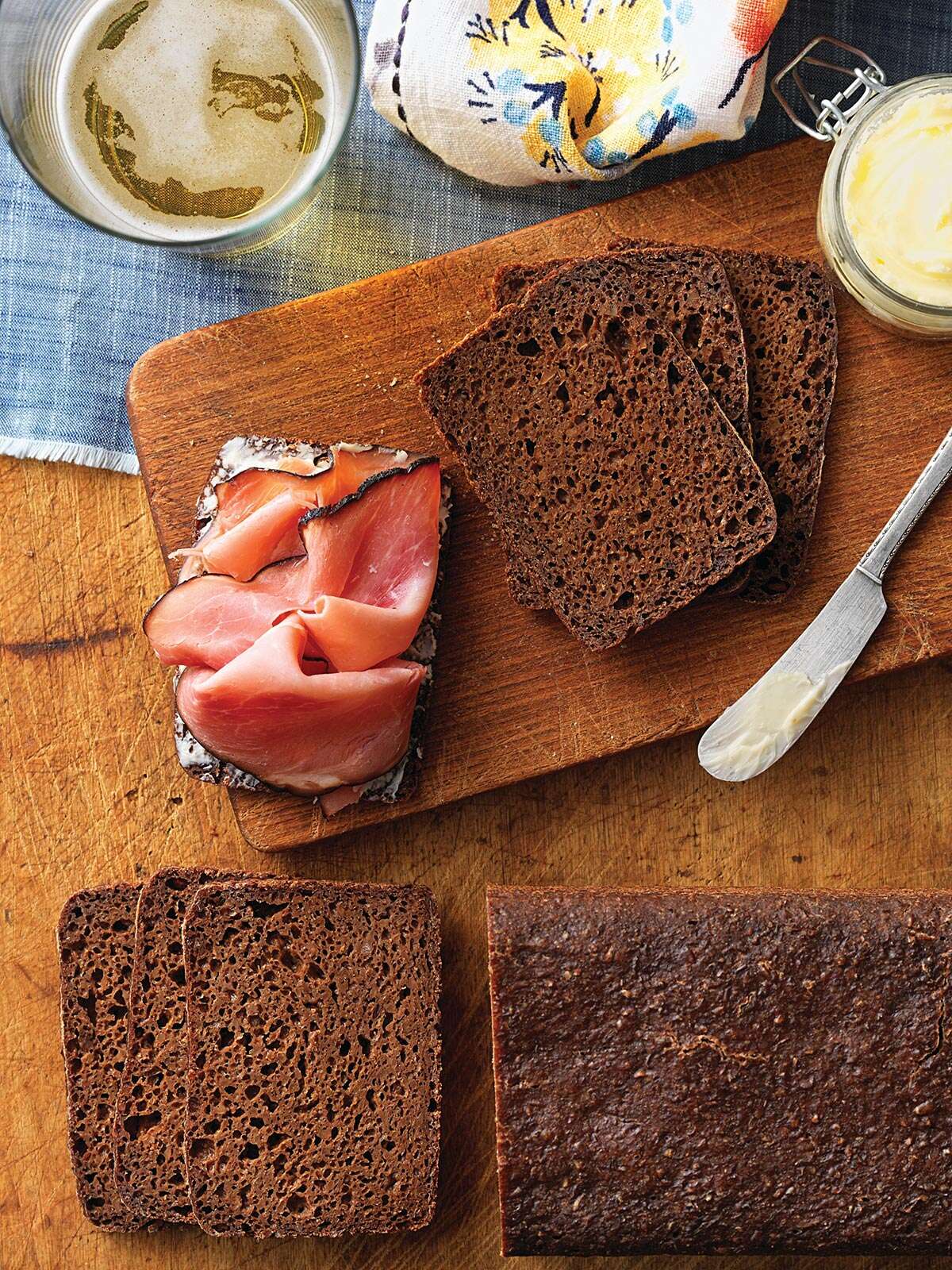 Some rye breads, like our Westphalian Rye (above), rise for up to 24 hours!

OK, back to our Chewy Semolina Rye. Gently deflate the dough, and shape it into an oval loaf; place the loaf on a lightly greased or parchment-lined baking sheet.

Towards the end of the rising time, preheat your oven to 400°F with a rack in the center. Spritz the loaf with water, and sprinkle it with the seeds of your choice, if desired.

Whether you're kneading caraway seeds right into the dough or sprinkling Everything Bagel Topping on top, seeds are responsible for much of rye's typical flavor.

Sourdough starter is another natural companion to rye flour. Try our Sourdough Rye Bread, and you'll see what I mean.

Now, while it's not usually as critical to slash rye bread before baking as it is, say, baguettes, I still like to do it. Slashing bread keeps it from tearing (often along the side) as it bakes by giving the rising dough a path for expansion. And while rye doesn't usually have the oven spring (i.e., the degree to which it rises in the oven) that white bread does, the slashes do ensure an even upward rise.

Plus they look nice.

Bake the bread for 25 to 30 minutes, tenting it with aluminum foil after 20 minutes to prevent over-browning. When the loaf is fully baked, a digital thermometer inserted into its center should register 190°F.

Remove the bread from the oven, and place it on a rack to cool. If it's in a loaf pan, turn it out of the pan onto the rack. Cool completely before slicing.

See what I mean about looking nice? Slashes give the loaf artisan panache.

And here's a rye sandwich loaf. Notice that whole-grain color, from just a relatively small amount of pumpernickel. The more rye flour you use, the darker your bread will be.

But for truly dark pumpernickel, the kind you see at the grocery store, most professional bakers have a secret: 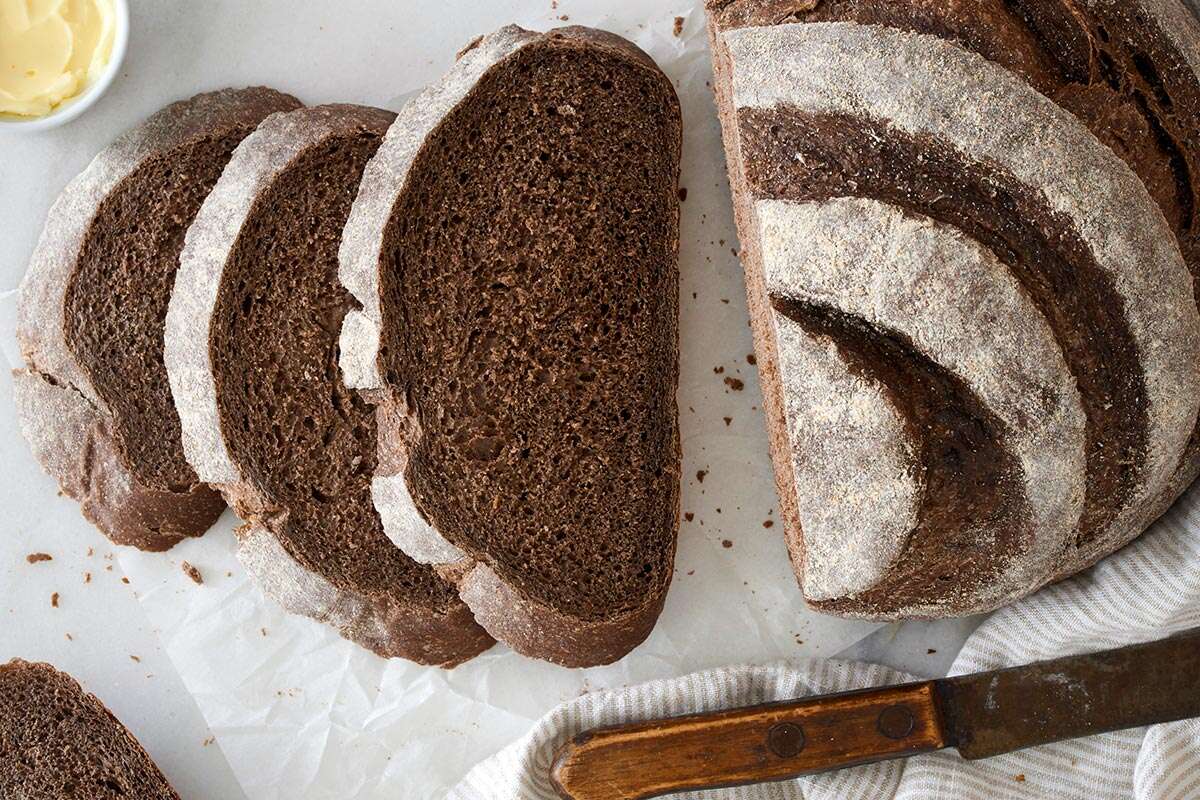 They add caramel color or black cocoa to give the resulting bread rich chocolate color – like in this Pumpernickel Boule (above).

So many rye breads, so little time! From light, soft sandwich rye to dark, dense loaves perfect for the smorgasbord, which kind of rye bread is your favorite? Tell us in comments, below.

First time using the classic medium rye flour recipe… the directions say to mix everything in bowl and knead… no instructions on whether to put active yeast in warm water ??? Necessary??? And ingredients show same quantity for instant and active yeast … is that right? Feel I’m headed for failure here!

That is correct Cyndi! For home baking recipes you can simply use a one to one conversion for active dry vs instant yeast. Generally with artisan breads you do not need to proof your yeast before as the dough is a bit more wet, but if you are concerned at all feel free to proof your yeast in a 1/4 cup of water (from the total amount listed in the ingredient list) before adding the rest of the ingredients and mixing.

This is my first time making rye bread. It came out dense did not rise, no flavor. I am not giving up. I will be trying it again substitute milk for the water and see what happens. Hope it comes out better than the first one I made.

New to bread making and started venturing into sourdoughs meaning no yeast, sugars or oils added. I have found the darger grains do not rise and have a gummy chewy texture (which some people like). I have learned that bread making is an art reserved for chemist. Is there anyway to get it to rise without the added expense of buying and adding gluten? I made my starter from a organic rye unbleached flour and used all white King Arthur unbleached bread flour.

Hi Darrell, If you are not looking to add gluten to your dough, one way to improve your rise is by adding a few additional TBSP of warm water during mixing to ensure you have a nice soft smooth dough. Happy Baking!

I'm finding in making rye bread, the dough is quite different between bloomer bread (white bread)like I usually make. I found it takes longer to kneed and doesn't get the elasticity like white bread. The mixture that I was using is 350 grams of King Arthur rye to 150 grams of white bread flour. Should I be using a mixture closer to 50% of each flour?

Hi Roger,
You're spot on here. Rye flours don't develop as much gluten as wheat-based flours and it does take longer for it to absorb liquid and develop those strong gluten bonds. Using more bread flour and less rye or an equal measure of each will make it easier to develop the gluten in the dough and will also give you a higher rise. Try 50/50 and see what you think about the outcome, and then you can continue to tinker from there to get your perfect ratio. It will be a very tasty journey!

I made a fabulous loaf of rye bread yesterday that is delicious, pretty, had a great rise & was perfect except that IT DOESNT TASTE LIKE RYE BREAD. The one loaf recipe (1 cup dark rye flour,2 1/2 c. bread flour) plus some cocoa powder, molasses & 1 TB of caraway seed, yeast, oil, water. Should I add fennel seed & pickle juice to this recipe & hope for improvement? I want RYE flavor on my Pastrami sandwiches! Thanks so much...TCS

Hi Torjie, substituting some pickle juice for part of the water content might well give you more of the tang traditionally associated with rye bread recipes. For an ingredient that really contributes a strong rye bread flavor, you might also consider purchasing our Deli Rye Flavor. Our Sandwich Rye Bread recipe is one that already includes pickle juice, along with various seeds, so that recipe might also deliver the flavor you're looking for.