“Perfect the coffee cake.” This was the considerable challenge handed off to Senior Recipe Developer Molly Marzalek-Kelly in the early months of 2022. Coffee cake had been selected as our 2023 Recipe of the Year after months of company-wide deliberation.

Why coffee cake? Because it’s versatile, comforting, shareable, and downright delicious. (Who can resist those crumbs?!) Plus, we knew we could improve on this classic breakfast treat, which is too often dry, crumbly, and boring. The result was our new recipe for Cinnamon-Crisp Coffee Cake, but it took months of effort and plenty of testing to get there.

Despite having well over 30 coffee cake recipes on our site already, Molly was tasked with developing a new recipe that checked a number of boxes: It had to be approachable for most bakers but still impressive; distinct in flavor and also crowd-pleasing; and make King Arthur ingredients shine but also rely on pantry staples. It was no easy task.

To my surprise, Molly looks back on her experience developing the ultimate coffee cake and says, “I remember the testing happening pretty quickly.” Some necessary context: “Pretty quickly” for the King Arthur Test Kitchen team means baking the recipe over two dozen times.

When this recipe's development began, the King Arthur Recipe Team — a group of bakers who help shepherd our online recipes — was pretty hot on reverse creaming, a mixing method that results in especially tender, fluffy cakes. We knew we wanted to showcase the technique in this coffee cake.

We also knew that we wanted a layer of slightly crisp crumbs on top to compliment the soft, fluffy cake beneath. After testing different ratios of brown to white sugar, amounts of butter, and baking times, the secret to crispy crumbs turned out to be two kinds of sugar: granulated for sweetness, and confectioners’ sugar primarily for texture. (There’s a bit of cornstarch in confectioners’ sugar that draws out moisture and adds crispness when baked.)

The filling also had to be special — it needed to be full-flavored and rich. Molly turned to cocoa, an ingredient that gives the filling a “fudgy” quality and, when used in the right proportion, doesn’t add a strong chocolate flavor, allowing the flavor of the cinnamon she added to shine through.

There we had it: tender reverse-creamed cake, crispy crumbs, and a fudgy filling. The trifecta that make a killer coffee cake.

The tinkering didn’t stop there. Once we nailed the foundational elements of the coffee cake, we wanted to see what else it could do. Could it handle double the streusel for a crumb lover's variation? Would it work with celebratory sprinkles? The base version, which we eventually named Cinnamon-Crisp Coffee Cake, turned out to be wildly adaptable.

Molly and the Recipe Team dreamt up many different versions of coffee cake that we wanted to try, from one that showcased the flavor of Vietnamese coffee, to classic peanut butter and jelly, and even milk and cereal.

We got carried away imagining seasonal flavor variations: roasted fruit in the spring, fresh berries in the summer, spices in the fall, and brown butter, coffee, and chocolate in the winter.

Before we knew it, we had over 40 different coffee cake ideas. But alas, we could only pick one.

For the past nine years, Recipe of the Year has showcased a single recipe all year long. But this time, we just couldn’t let go of the idea of embracing this coffee cake’s versatility.

I remember hearing Molly quietly suggest to the Recipe Team, “What if we did 10 variations of coffee cake?” My mind immediately went spinning. It’s a lot of work to develop a single recipe and bring it to life on our website. It felt like a TON of work to do this 10 times over.

But Molly seemed unintimidated, and the rest of us followed her lead. “People can bake them all to find their favorite!” “We could release them on a seasonal basis!” “10 variations for our 10th Recipe of the Year!” The Recipe Team was on board.

Looking back, Molly says she was a little naive about how difficult it would be to develop 10 variations of coffee cake, but in a way, it was also freeing. Without having to commit to a single recipe or flavor profile, her creativity could shine.

A year unlike any other

By the time 2023 is over, there will be 10 variations of the incredible reverse-creamed, slightly-crispy-crumbed coffee cake. Right now you can bake our Triple Chocolate Coffee Cake (a chocolate lover's dream and perfect midnight snack), or if you're more into the crumbs than chocolate, make our Crumb Lover's Coffee Cake. There's also the funfetti-inspired Birthday Coffee Cake, which makes the best birthday (or any special day) breakfast.

The variations that will follow in the spring and fall are just as flavorful and fun as those in the winter collection: They'll range from fruity and bright to rich and indulgent to spicy and unexpected. Bake them all to find your favorite (or should I say, favorites). I suspect we won’t be the only ones unable to commit to a single coffee cake when there are so many delicious possibilities.

And don’t stop at the flavor variations we came up with! Molly hopes bakers will feel inspired to dream up their own versions of this coffee cake too. We can’t wait to see what you come up with.

Check out the seasonal recipes available now, as well as the recipe that started it all: Cinnamon-Crisp Coffee Cake. Bake and share your coffee cakes with us on Facebook and Instagram using #RecipeOfTheYear! 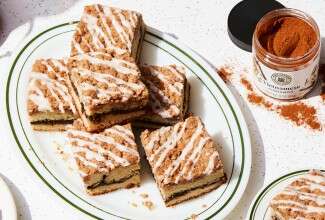 Love this recipe! Can you double it as written for a 9 x 13?

Hi Terri. You sure can! A double batch of this recipe will fit perfectly in a 9X13 pan. You bake time may be slightly longer, so keep an eye on things and once that tester comes out from the center with just a few moist crumbs, you know it will be ready to remove and cool. Happy Baking!

I love this recipe so much! I've already baked it twice so far and will likely bake it who knows how many more times this year and in the years to come. Thanks so much for this recipe and the detailed breakdown!

This recipe looks awesome -- but I'm remembering in my youth a good friend who made a coffee cake very similar to this, but it was called a sour cream coffee cake. Would (can) I just substitute sour cream for the yogurt/buttermilk? Thanks!

Hi Kent! You sure can use sour cream in place of the yogurt or buttermilk. Simply use the same amount that is called for in the recipe (1 cup or 227 grams). Happy Baking!

I never baked before the early lockdown days of 2020. Once I started working from home, and going to bakeries was not possible, I was missing quality baked goods something fierce. One of my friends encouraged me to give baking a try, and directed me to the King Arthur website. Fast forward to 2023. I have 7 different kinds of flour in my pantry, own a stand mixer, and I bake at least twice a week.

KA recipes of the year and the detailed blogs explaining how and why the recipes work have given me so much confidence and joy. I’m delighted to be a part of this community.

And the Cinnamon Crisp Coffee Cake is perfect! My birthday is in January, so I will definitely be trying the birthday cake version next.

We are so happy to hear that, Nicole! Thanks for sharing your story and thanks for baking with us!

Wow! I am not a coffee cake fan. That's probably because I've found them to be dry and unflavorful. Last night, I made this recipe. Today, my tastebuds were in coffee cake heaven! I am sold on this RECIPE OF THE YEAR. Follow the recipe without changes and you will be so glad that you did. It is magnificent!

Hi Linda! We are thrilled to hear that you (and your taste buds) loved this recipe. It certainly is delicious! Thanks for sharing...and Happy Baking!

I made this coffee cake using the yogurt and it came out perfect! My husband loves it as well! I may try buttermilk. Can buttermilk powder be substituted by adding water to make a liquid? Thanks