Whether you’re hosting a smaller gathering than normal or just want to bake for yourself and a loved one, there are plenty of occasions in which a full-size baked treat isn’t ideal. And this year, with holiday celebrations necessarily limited in scope, the need for smaller desserts is even greater. An entire 9" x 13" sheet cake for a four-person Thanksgiving feast? Sounds delicious, but probably excessive.

The solution? Reduce your recipe, scaling down to make smaller portions of the same tasty baked good. When it comes to reducing a recipe, however, you can’t simply divide all the ingredients in half and call it a day. There are plenty of other factors to consider: pan size, baking time, how in the world to divide an egg …

We’re sharing tips, techniques, and advice for how to divide a recipe — here's what you need to know.

The first step to reducing your recipe is figuring out which pan to bake it in. You can’t simply cut a recipe in half and then bake it in any pan smaller than the original. Instead, it's going to take a little math to ensure the batter or dough actually fits.

To do this, you'll need to:

For instance, if you have a recipe for Nantucket Cranberry Cake that you typically bake in a 9" x 9" square pan, you'd calculate the baking area by multiplying 9" x 9" = 81". If you're cutting the recipe in half, divide this area by two: 81" ÷ 2 = 40.5". That's the baking area you'll need for your reduced recipe.

If you thought you left math behind in high school, there are lots of free surface area calculators online, especially for dealing with something tricky like a circle!

I suggest checking out our post on the essential alternative pan sizes for a deeper dive on how to calculate pan sizes. But here are some key pan swaps to keep in mind:

No matter how you're baking, we always suggest using a scale to weigh ingredients. It's so much more accurate, and it leaves less room for error. But when it comes to reducing a recipe, using weight measurements is extra important.

That's because weight makes dividing easier by eliminating the need for complicated math. Do you know how to divide 1 3/4 cups of flour by three? Or 1/3 cup vegetable oil in half? When you're dividing volume measurements things start getting tricky quickly.

Instead, simply refer to the gram measurements of ingredients and use a calculator to divide accordingly. 210g flour (1 3/4 cups) divided by three is 70g. 67g vegetable oil (1/3 cup) divided by two is 33.5g (or 34g, since we round ingredient weights up when dealing with decimals). Go through the recipe before you start baking, do all the math at once, and write down the reduced amounts for each ingredient to reference as you bake the recipe.

If you're ready for a little more math, baker's percentage is a fantastic way to reduce your recipe by as much or as little as you want, rather than just dividing in half or thirds. Using this technique, you can scale a recipe down by anything from 15% to 80%.

See our post on baker’s percentage for details on how to use this method. Once you've got a grasp, you’ll be able to easily reduce a biscuit recipe to yield six biscuits instead of nine, or three Apple Muffins instead of 12.

Ah, the classic dilemma. You want to bake a half batch of Chocolate Chip Oatmeal Cookies, but the original recipe calls for 1 egg and 1 egg yolk. How do you divide that in half?

Break out the scale again — you're going to need it. The most accurate way to divide an egg (or egg yolk or egg white) is to use weight. A standard large egg outside of its shell weighs about 50g. The yolk is usually 14g, and the white is around 35g.

To use in a recipe, simply divide the weight of eggs called for by two (or by however much you're reducing your recipe). Lightly whisk the egg, then weigh out as much whisked egg as you need for your recipe. For this example, the egg and egg yolk weigh 64g together, so you'd lightly whisk them then measure 32g to use in the halved recipe.

You can use any leftover egg for an egg wash, or save in the fridge and add to the next morning's scramble to reduce waste. Liquid eggs in a carton are also helpful here — you can pour just what you need, with no extra egg left over.

Rather than reducing a recipe because you don't want to have a full-size baked good, consider an alternate route: baking the full recipe in smaller individual amounts. You can either freeze extras to eat later, or gift them to friends and neighbors.

For instance, if you want to bake Pumpkin Layer Cake but don't want an entire tiered cake sitting around the house, you can turn the cake into cupcakes using the tips and techniques outlined in this blog post: How to convert cake to cupcakes. Eat a few, then share the rest with people you love or stash them in the freezer for a rainy day.

Wondering how to enjoy a variety of pies without baking up several full-size versions? In case you missed it, my fellow blogger PJ recently shared a whole tutorial on how to turn a regular pie recipe into mini pies!

Instead of reducing a full recipe, try using the freezer instead. Plenty of recipes already baked in individual servings — like rolls or cookies — can be prepared in full batches then frozen before you bake, or even baked and then frozen. When you’re ready to enjoy, simply bake or defrost them in small quantities perfect for one person or however many people you’re serving.

Most cookie recipes are fantastic for this — just scoop the dough onto a parchment-lined baking sheet, freeze until firm, then store in a zip-top bag in the freezer until you’re ready to bake and eat.

If you're baking a recipe in a smaller vessel — whether you cut the recipe in half or divide the full recipe into smaller baking containers — you'll need to adjust the baking time accordingly. Since there's less batter, these smaller versions will bake faster than the full-size version.

There's no hard and fast calculation to determine just how long a reduced recipe will need to bake. It could vary anywhere from 5% to 50% less time. So instead of trying to guess the precise baking time, rely on your senses to determine when your cake, cookies, bread, etc. are fully baked.

A good rule of thumb is to set your timer for half the amount of time called for in the original recipe. So if a 9" x 13" cake takes 50 minutes to bake and you've halved the recipe to bake in a 9" cake pan, set your timer to start checking after 25 minutes. It probably won't be done by then, but remember: you can always bake something longer, but you can’t unbake it if it’s been in the oven for too long.

Continue checking regularly — every 5 or so minutes for cakes and quick breads, a few minutes for brownies and bars, and 1 or 2 minutes for quick-baking recipes like cookies. Look to the recipe for visual clues about when the baked good is done — the directions might say it should be golden brown across the top, or the sides should start to pull away from the pan. We also have a whole post on how to tell when cake is done, which is an excellent guide for this process.

If you're planning to scale down a yeast bread or roll recipe, there are a few important elements unique to reducing yeast recipes to keep in mind:

With many of us planning smaller gatherings this holiday season, baking reduced versions of our favorite celebratory treats can ensure a robust dessert spread without wasted food or ingredients. Just because there's no need for the full-size version of a beloved recipe doesn't mean it has to be absent from the table. Instead, use the tips outlined here to bake up all your favorite things — simply smaller!

If you're reducing a recipe that calls for pumpkin this season, you might be left with a whole bunch of unused purée. Check out our blog post on what to do with your surplus pumpkin, so you can put it to use instead of putting it in the trash or compost.

Our favorite cookbooks to buy for the baker in your life 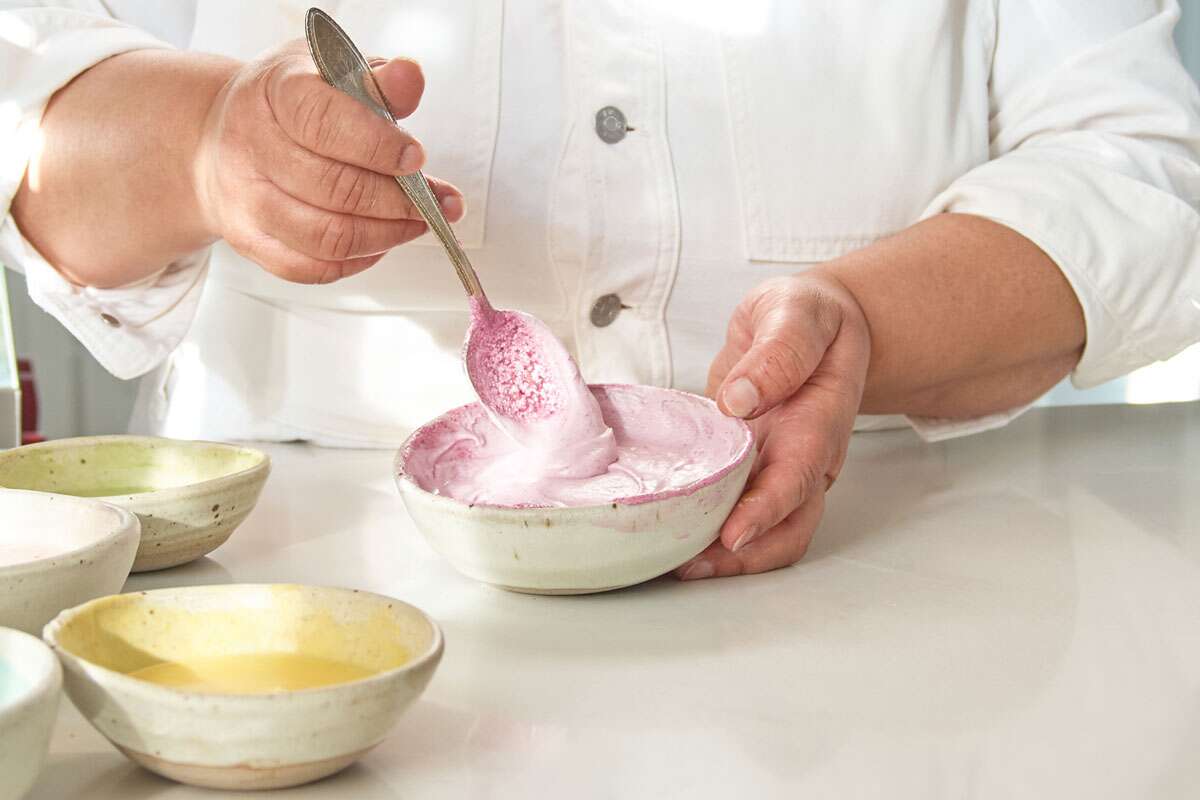 What a VERY useful and timely article! Keeping it handy when I start my holiday baking. Thank you!

This story came just in time! I reduced my chocolate chip cookie recipe to make just 6 cookies! Usually, I don’t have a problem finding homes for the extra 2 or 3 dozen cookies that I make (but shouldn’t eat). But with COVID, it makes things a bit difficult to find takers for the extras.

In "Bakewise" aurhor Shirley Corriher, former DOW research chemist and southern cook stated (in a radio interview) not all recipes are easily scalable up or down.

IIRC, Ms. Corriher had to scale recipes up for commercial kitchens. I'm not sure what technique she used.

Would you please advise how we should handle baking failure(s) of scaled recipes that are not explained if other variables are controlled?

Thank you and Great baking!

Hi there, Jack! Most recipes scale fine in smaller settings, like a two or three times batch or a half batch. The trouble usually comes when you go beyond a three times batch of a recipe. At that point, you really need to be familiar with baker's percentages and ratios for various baked goods. With a standard, well-tested recipe, you should be able to scale it within reason without any trouble, especially if you're using weights rather than volume.

If you do run into trouble with a recipe that you've scaled up or down, being familiar with ingredients and their job in a recipe really helps to nail down what might have gone awry. For example, sugar and it's liquifying properties or how different fats work in baking.

We hope this helps and happy baking!

Great suggestions; particularly the one in #5 (Go Mini). I have posted this to my Facebook page, with a note that suggests people bake the full recipe (Mini or not) then find a recipient or two who would be happy to receive an unexpected gift.

I'm glad to see KAB published this article. As a single guy I don't need or want to make full recipes all the time. It's not possible for me to eat it all, and I'm not fond of leftovers in many cases. Your idea of gifting the mini's is a good way to connect with your family, friends and neighbors. Just the other day my neighbor gave me a zucchini bread which was a nice surprise.