How to keep the fresh in "fresh-baked."

What’s the best way to store yeast bread? An apt question, especially during the summer. Heat and humidity can turn the crunchy-crispy crusts of your baguettes and boules soft as pudding. Meanwhile, homemade burger buns and sandwich loaves start to develop those dreaded white spots — mold precursors — seemingly as soon as they’re cooled, bagged, and stashed in the bread drawer.

What’s a dedicated bread lover to do? Add preservatives, like you’d find in store-bought loaves?

Perish the thought. You can lengthen any bread’s viability simply by focusing on four key factors.

1) Slicing: where you cut matters

When your bread has cooled and you’re ready to cut into it, think before you act. If you start slicing at one end, you’ll always be dealing with an open end “leaking” moisture. But if you slice the loaf in half down the middle, cut a slice from one of the halves, then press the two halves back together before wrapping, no open surface will be exposed — which means less chance of moisture evaporating.

2) Material: cloth vs. plastic vs. foil

Storing bread in either plastic, cloth, or foil helps retain the loaf’s moisture. This moisture retention is a plus when it comes to the bread’s crumb (interior) — but a minus if you’re talking crunchy-crispy crust, since wrapping bread will inevitably soften its crust as well as its crumb. There’s simply no way bread will retain both a crispy crust and soft interior for longer than a day. But since crust crispiness can generally be restored via reheating, most people store their bread wrapped to ensure the interior remains soft.

So which wrap works best: cloth, plastic, or aluminum foil? Let’s find out. 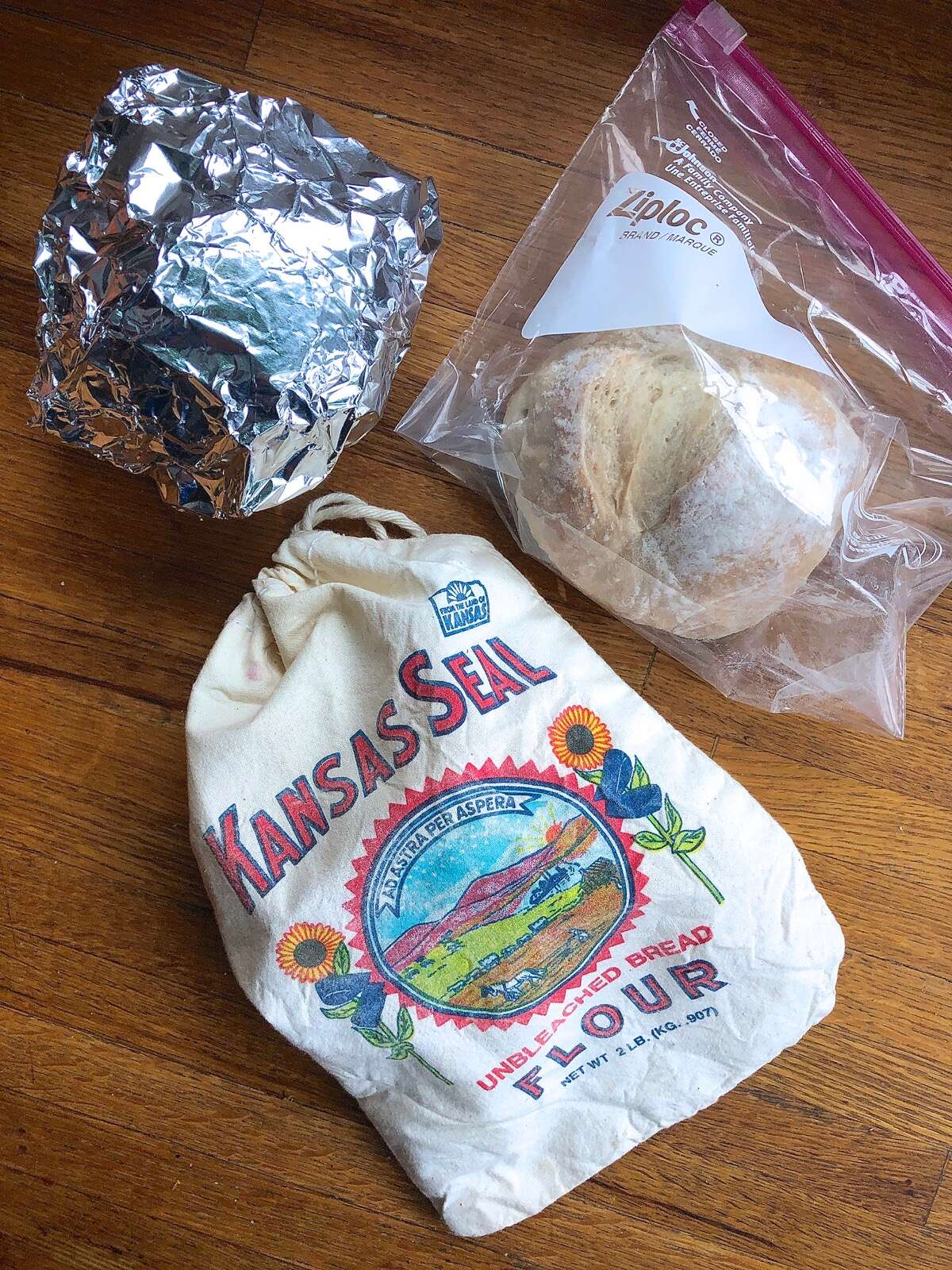 I bake three no-knead mini boules and store one in a zip-top plastic bag, one in a drawstring cloth bag, and one tightly wrapped in foil, all at room temperature. Predictably, 24 hours later the boules stored in plastic and foil have lost their crunchy crust but remain soft overall. The bread in the cloth bag is a different story: rather than crunchy, its crust is beginning to harden, while its interior is drying out.

These results make sense. Plastic and foil, both being airtight, trap any moisture migrating from the bread’s interior, keeping it soft (including the crust). Cloth, being breathable, retains less moisture; the disappointment is that this doesn't translate into a crispy crust, but rather a hard one. So if you want to store bread for a day or so at room temperature, plastic or foil (rather than cloth) is the way to go.

The takeaway: If you're storing bread for a day or two at room temperature, plastic or foil (rather than cloth) are the best options.

You can certainly wrap your bread in plastic wrap or a reusable wrap. But I'm in love with King Arthur's food-safe, heavy-grade plastic bread bags, which come in sizes and shapes you just won't find in the typical zip-top bag. 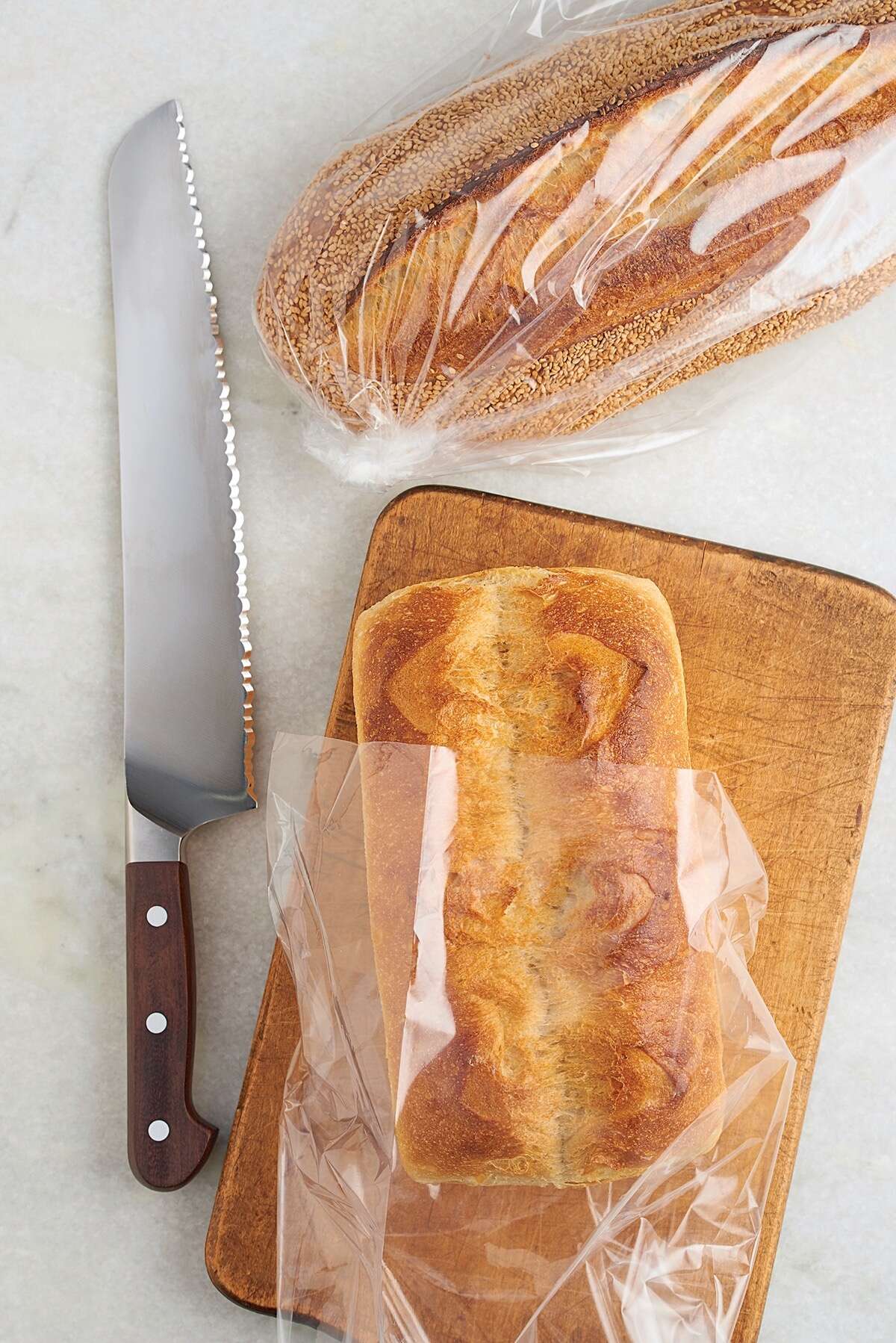 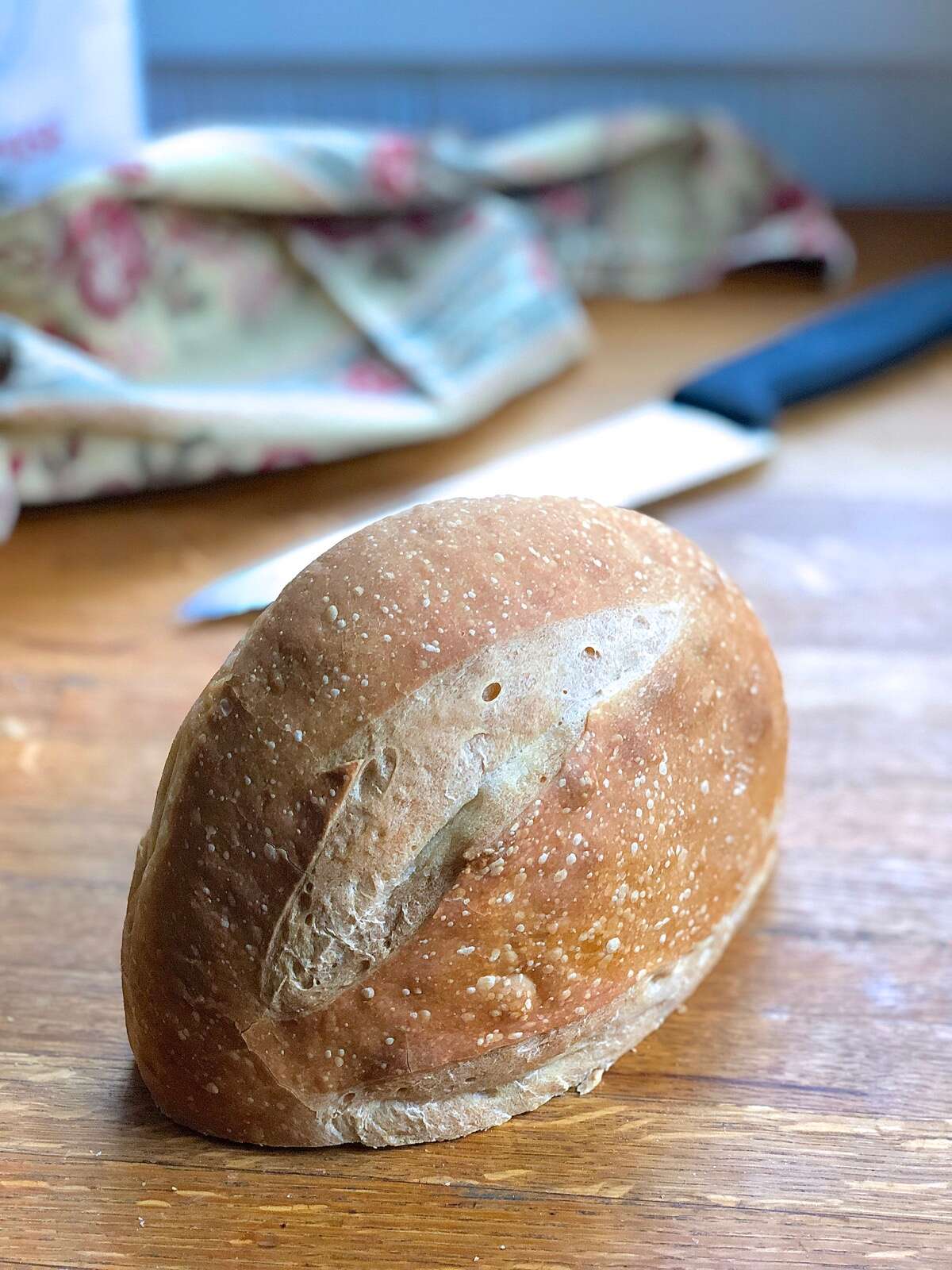 An exception to the general practice of wrapping bread for storage is large, heavy boules (round loaves). These can be stored for a couple of days unwrapped, cut side down on the counter. No wrapping means their crust will stay relatively crisp. A round loaf has less surface area than a longer loaf, limiting moisture evaporation. And a large loaf simply takes longer to dry out, especially if you shield its cut side by placing it flush with a solid surface to block air flow.

For storage purposes, anything between about 60°F and 80°F is acceptable. Lower than that and the bread will go stale more quickly; higher than that and it may mold, especially in humid conditions. 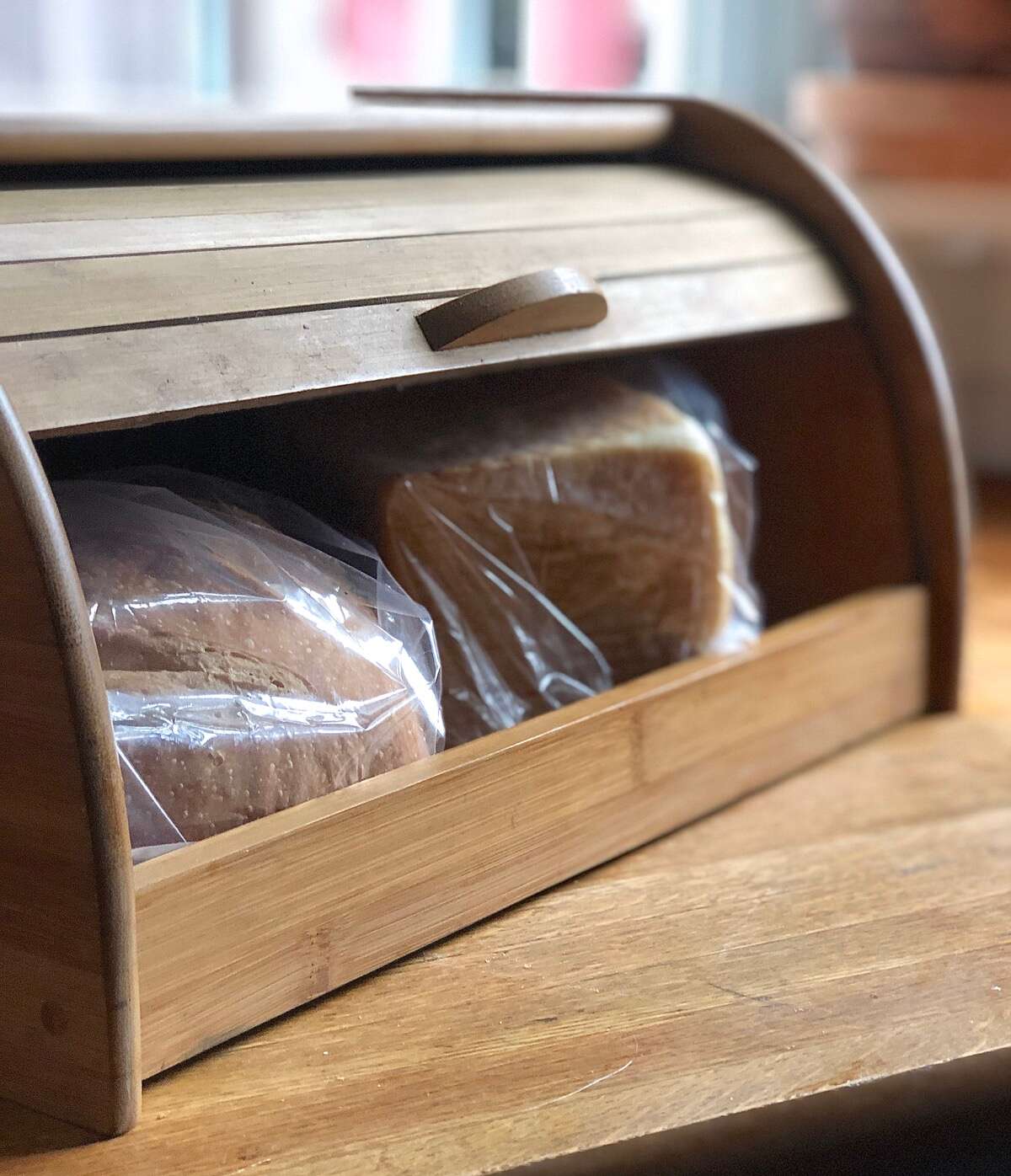 It’s also best to keep bread dark and away from sunlight, which can overheat it. Potential dark locations include a bread box, cupboard, drawer, dark pantry or, surprisingly, your oven or microwave (not in use, of course!).

Wrapping bread and storing it at room temperature will help it retain moisture for a few days. But what if you can’t finish the whole loaf in that amount of time? Freezing is the answer.

The takeaway: If you're storing bread longer than a few days, it's best to keep it in the freezer.

Once your loaf is totally cool, cut off whatever portion you won’t be eating within a couple of days; re-bag the remainder and return it to its room temperature storage space. Slice the cut-off portion and wrap the slices airtight in plastic, four or six slices to a packet (or however many you think you and your family will eat in one day). 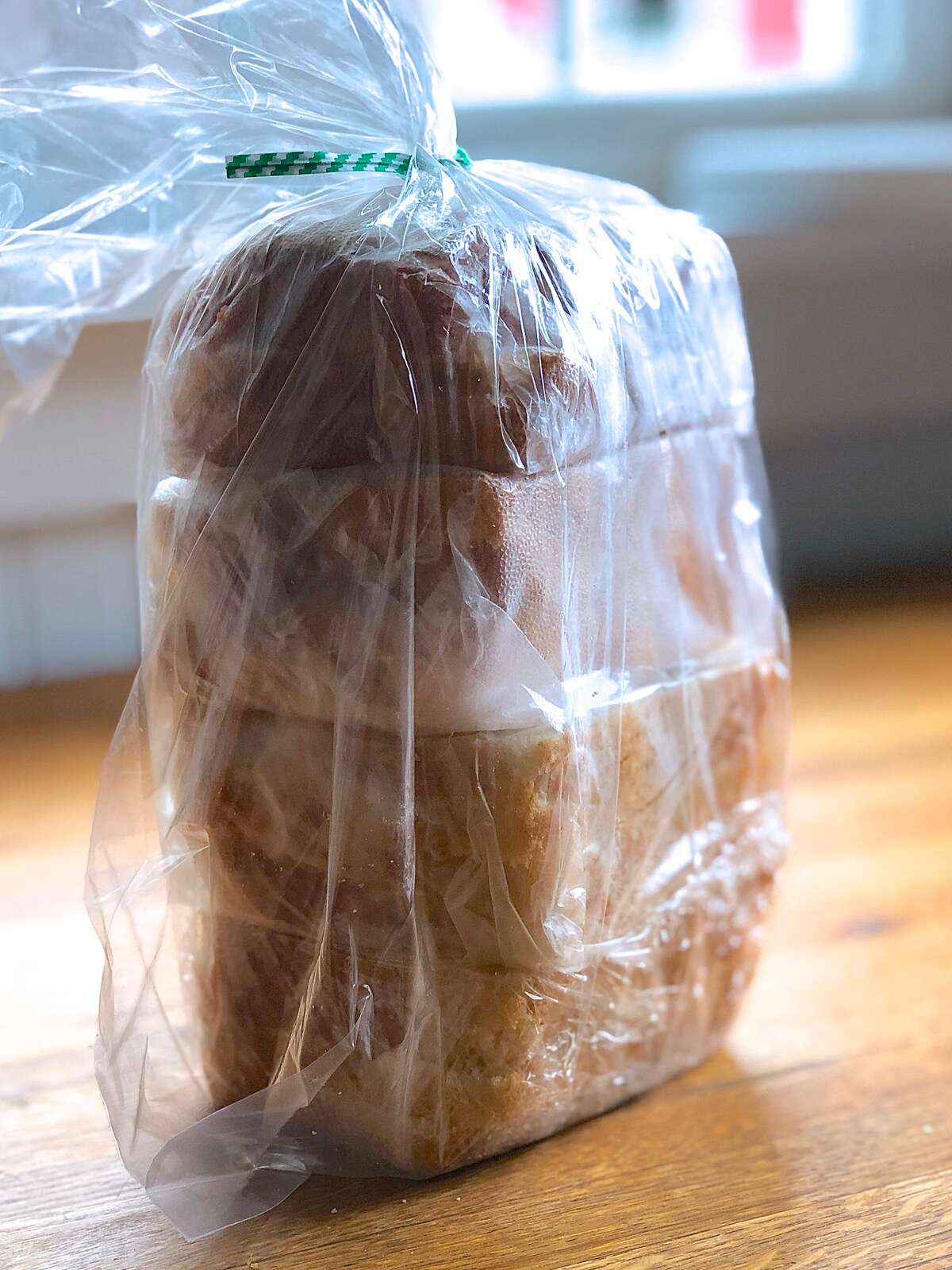 Place these individual packets into a plastic bag, seal tightly, and place in the freezer, preferably in the coldest part (away from the door).

When you want bread, simply remove one packet, unwrap it, and store the slices in a zip-top plastic bag. Soft sandwich breads can be served as is; crusty breads will benefit by toasting, or at least reheating until warm. Heating bread releases starch’s hold on its liquid, allowing moisture to circulate freely throughout the loaf just as it did when freshly baked. 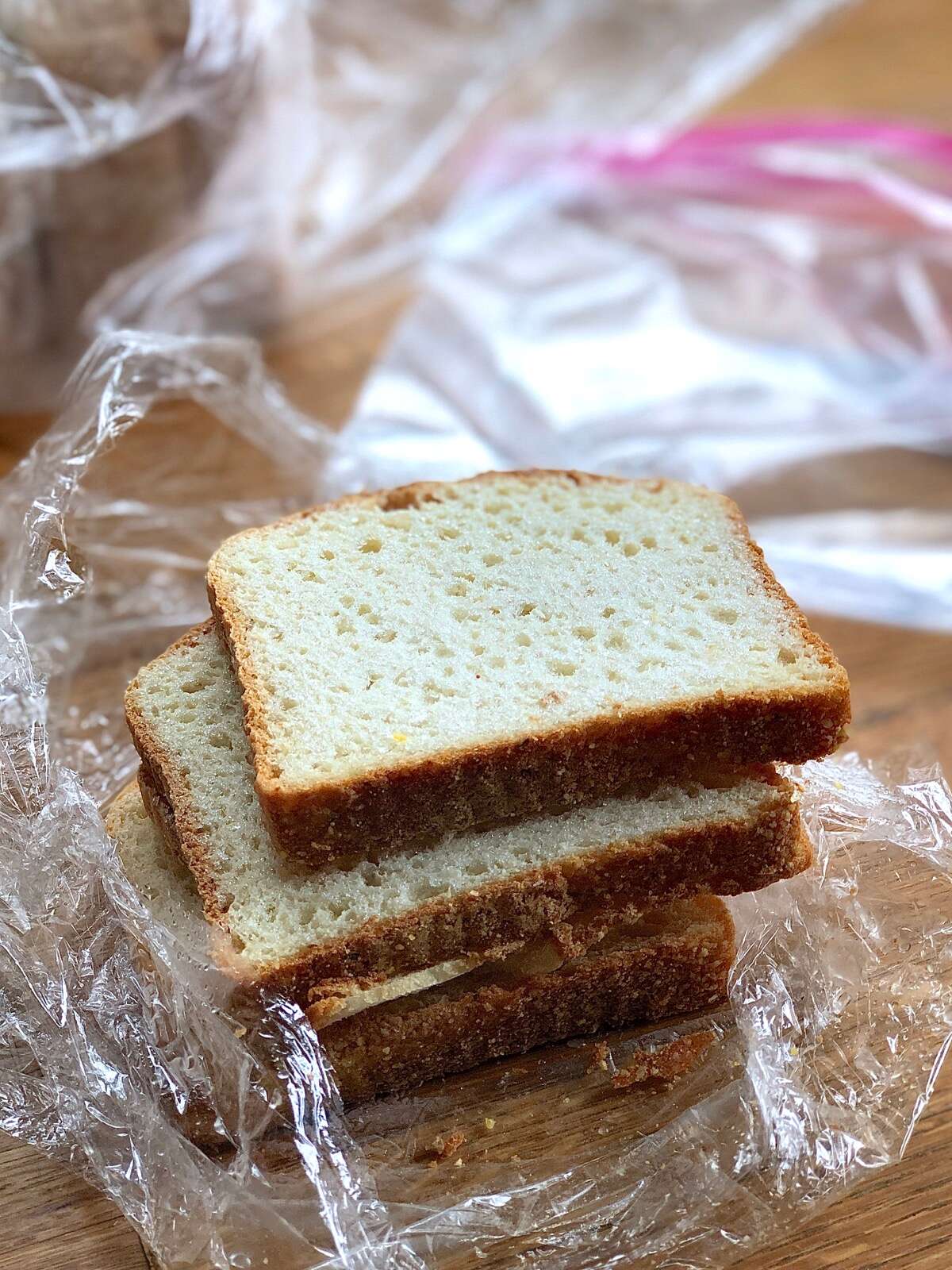 What about refrigerating bread? Don’t do it — unless you promise to toast or reheat your sandwich slices or crusty rolls before eating! Freezing bread stops its starch from releasing the liquid absorbed during the dough’s preparation, thus allowing the loaf to retain most of its moisture. But the same’s not true for refrigerating bread: chilling but not freezing encourages liquid in your loaf to continue migrating to the bread’s surface, where it evaporates — and your bread quickly becomes stale.

If your kitchen is SO hot and humid that your bread molds within a day or so and you don’t want to freeze it, then sure: refrigerate it to stop the mold. But as I said, be sure to reheat or toast it before using. 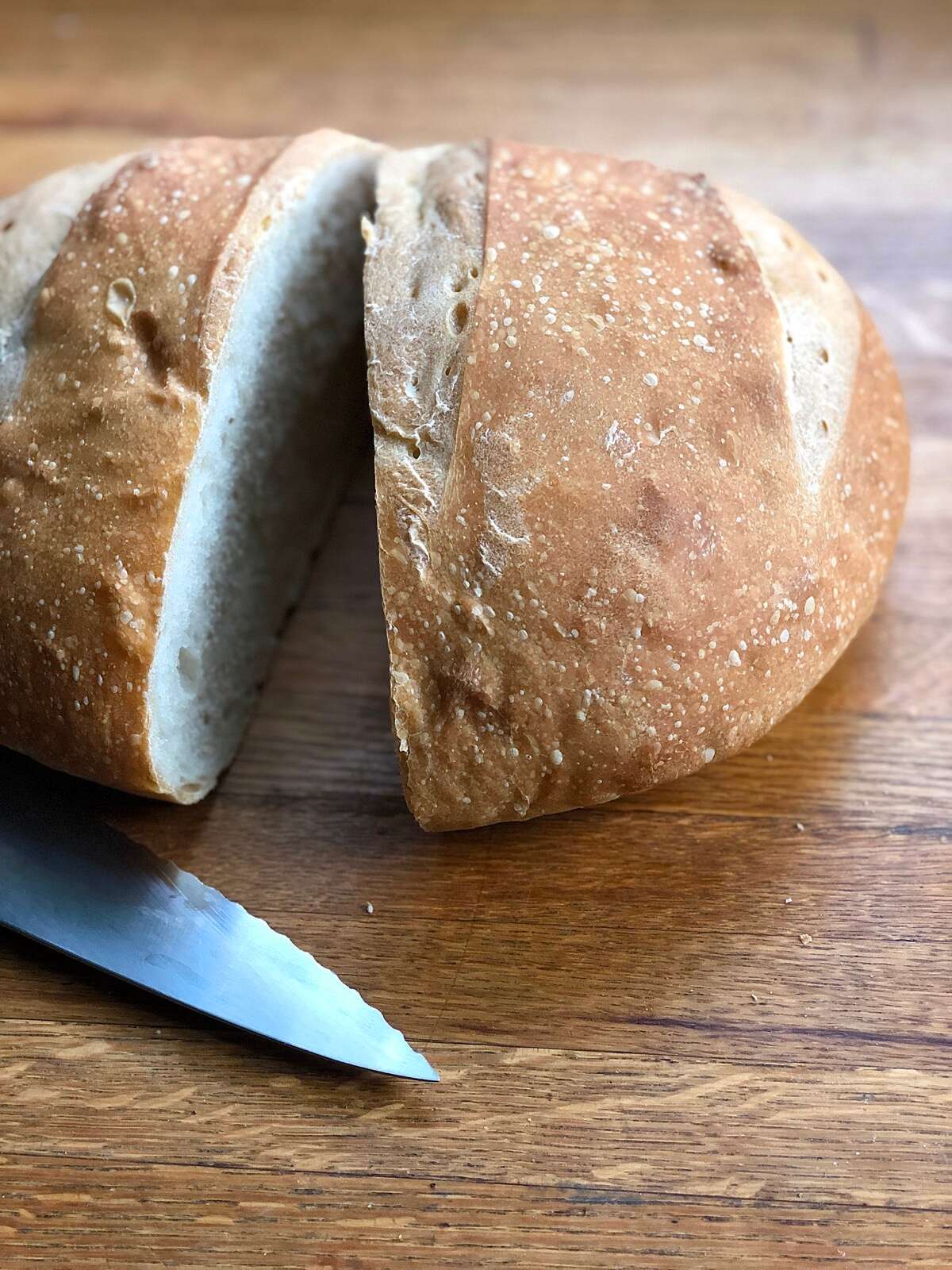 Certain breads, just by the nature of their ingredients, are more likely to stay fresh at room temperature than others. So if freezer space is an issue, try your hand at one of these two styles:

In addition, this acidity keeps the loaf’s crumb soft by slowing a process called starch retrogradation: the tendency of the starch in your bread’s flour to revert to its original state, releasing any liquid it’s absorbed while being turned into a loaf of bread. The more liquid released by starch, the drier (staler) your bread will be, since this released liquid quickly exits your bread via evaporation. So sourdough’s slowdown of this retrogradation helps keep your bread fresh. 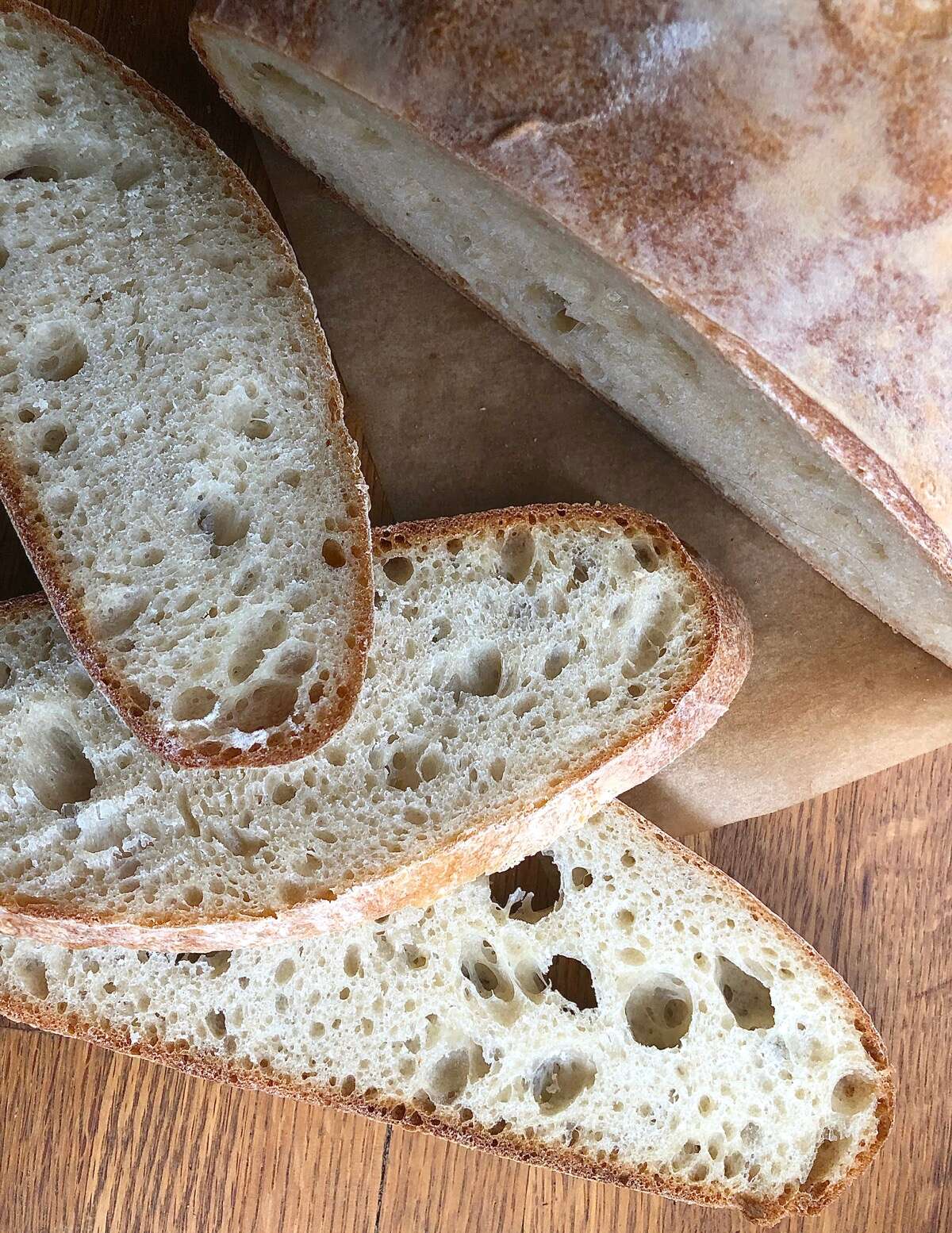 Want to give sourdough bread a test drive? Make (or buy) your starter, then try our recipe for Rustic Sourdough Bread.

Tangzhong: When making soft sandwich bread or dinner rolls, keep them fresh longer at room temperature by starting with a quick and easy tangzhong starter. Read the preparation details (and the science behind this surprising process) here: Introduction to tangzhong. And for a delightful sandwich bread that’ll stay fresh days longer than a standard loaf, try our Japanese Milk Bread. 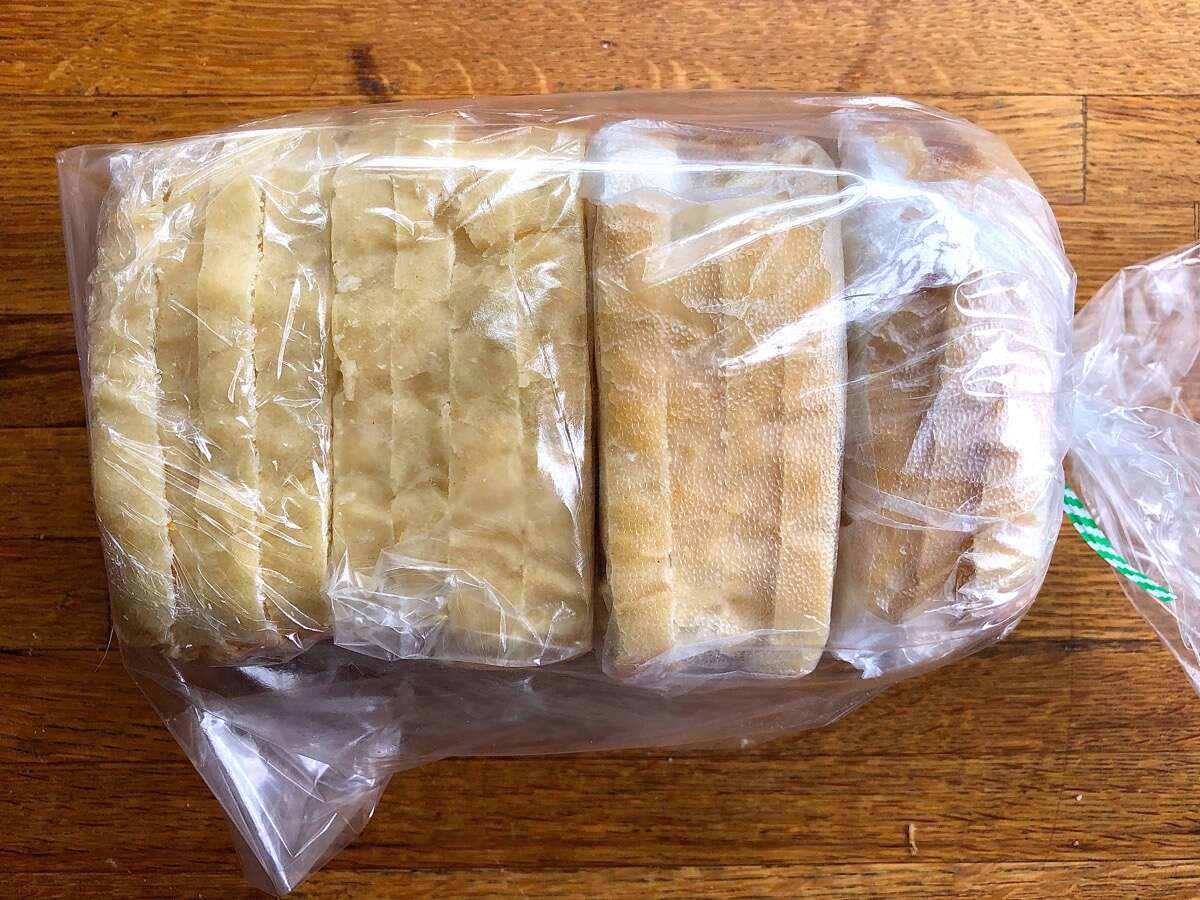 Baguettes are notorious for losing their crispy crust and soft interior within hours of being baked. So what’s the best way to refresh a day-old — or multiple-days-old — baguette?

Various online food sites have offered versions of this bread hack, and it works...somewhat. While your baguette will never return to its just-baked goodness, you can at least soften the interior and add some crunch to the crust by taking a few easy steps. 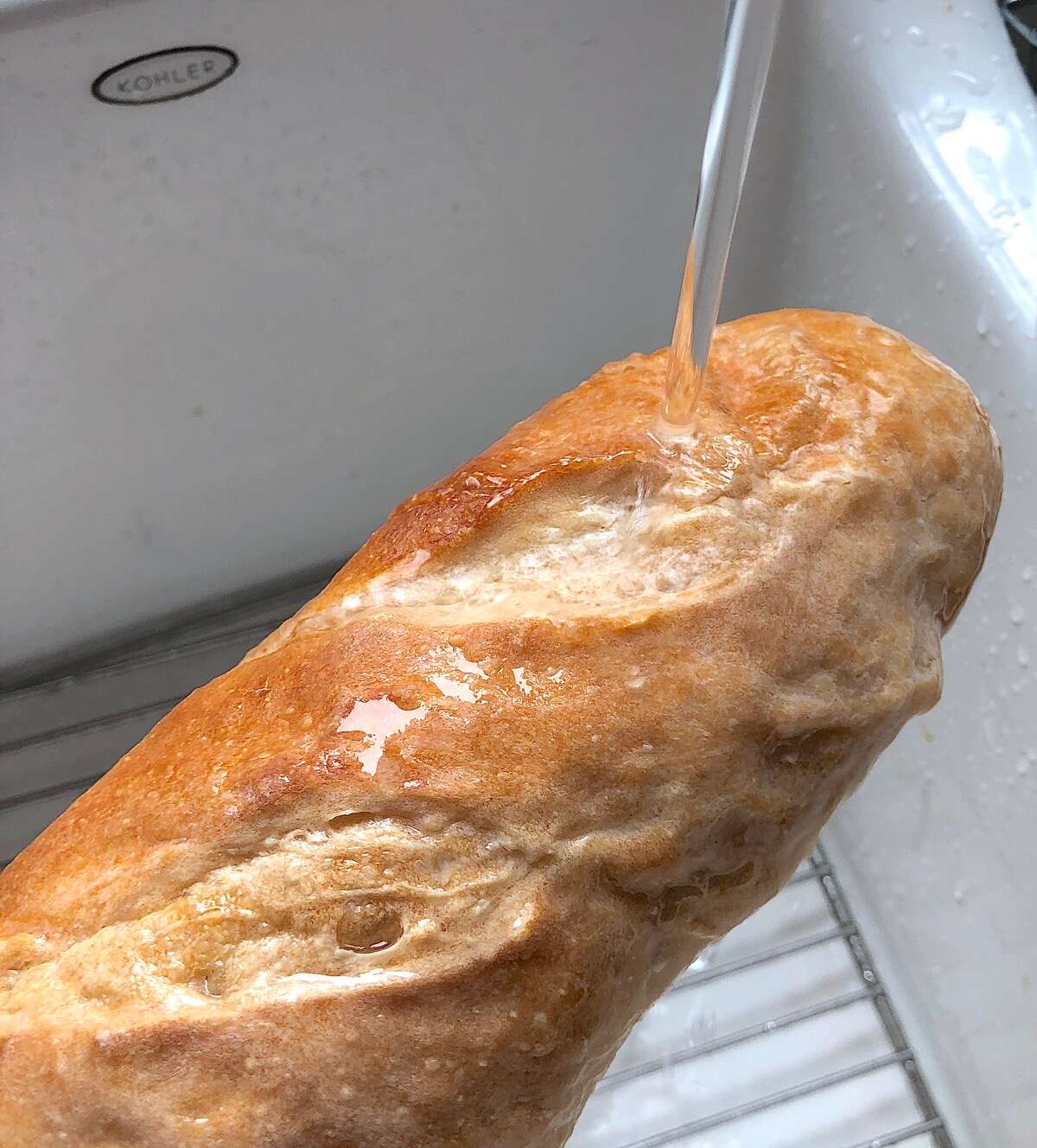 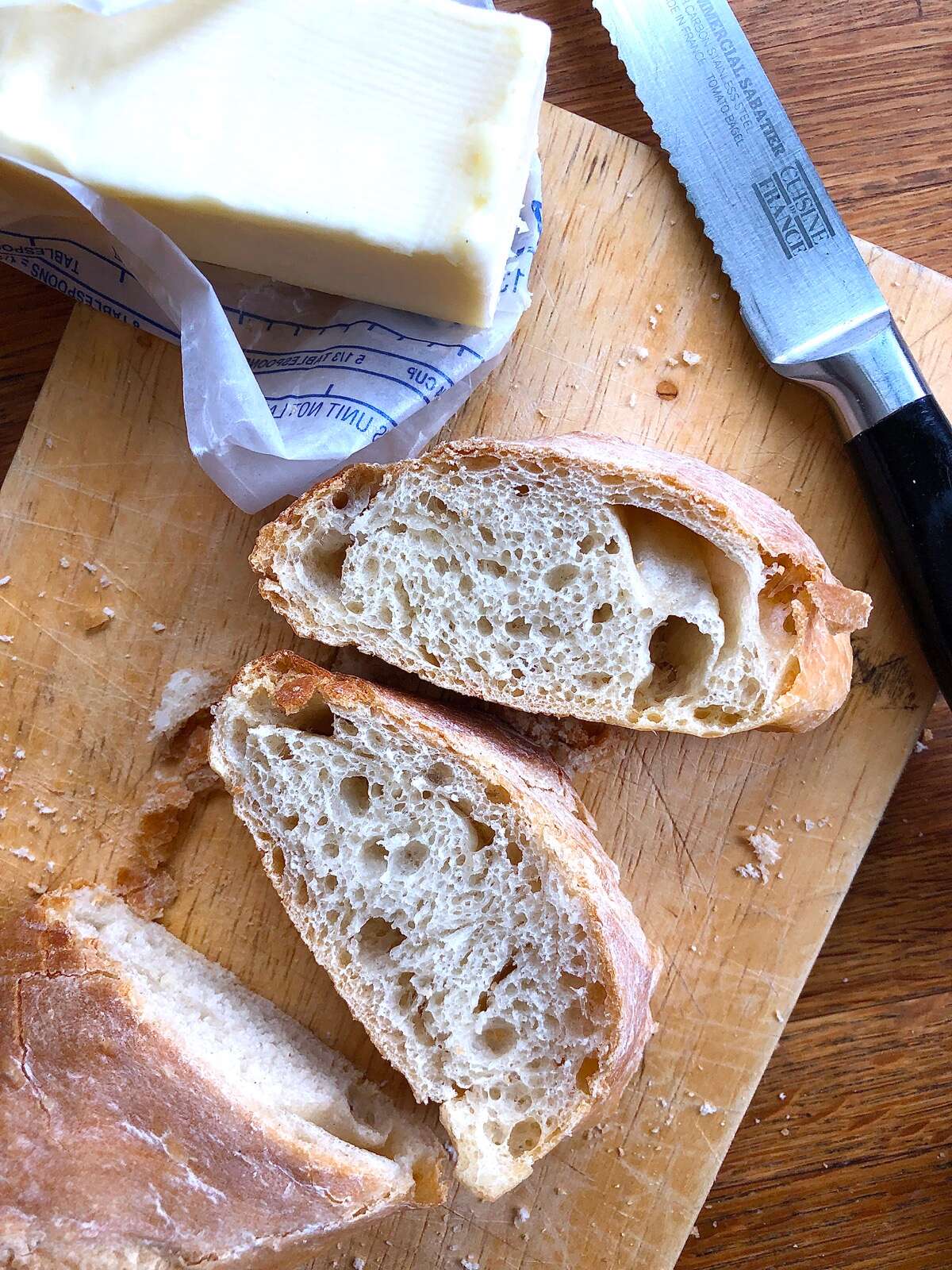 Will this work for other crusty breads? Yes, though the thinner (like a baguette) or smaller (like a roll) the better. Very large breads take too long for the oven’s heat to reach their center before the crust dries out. 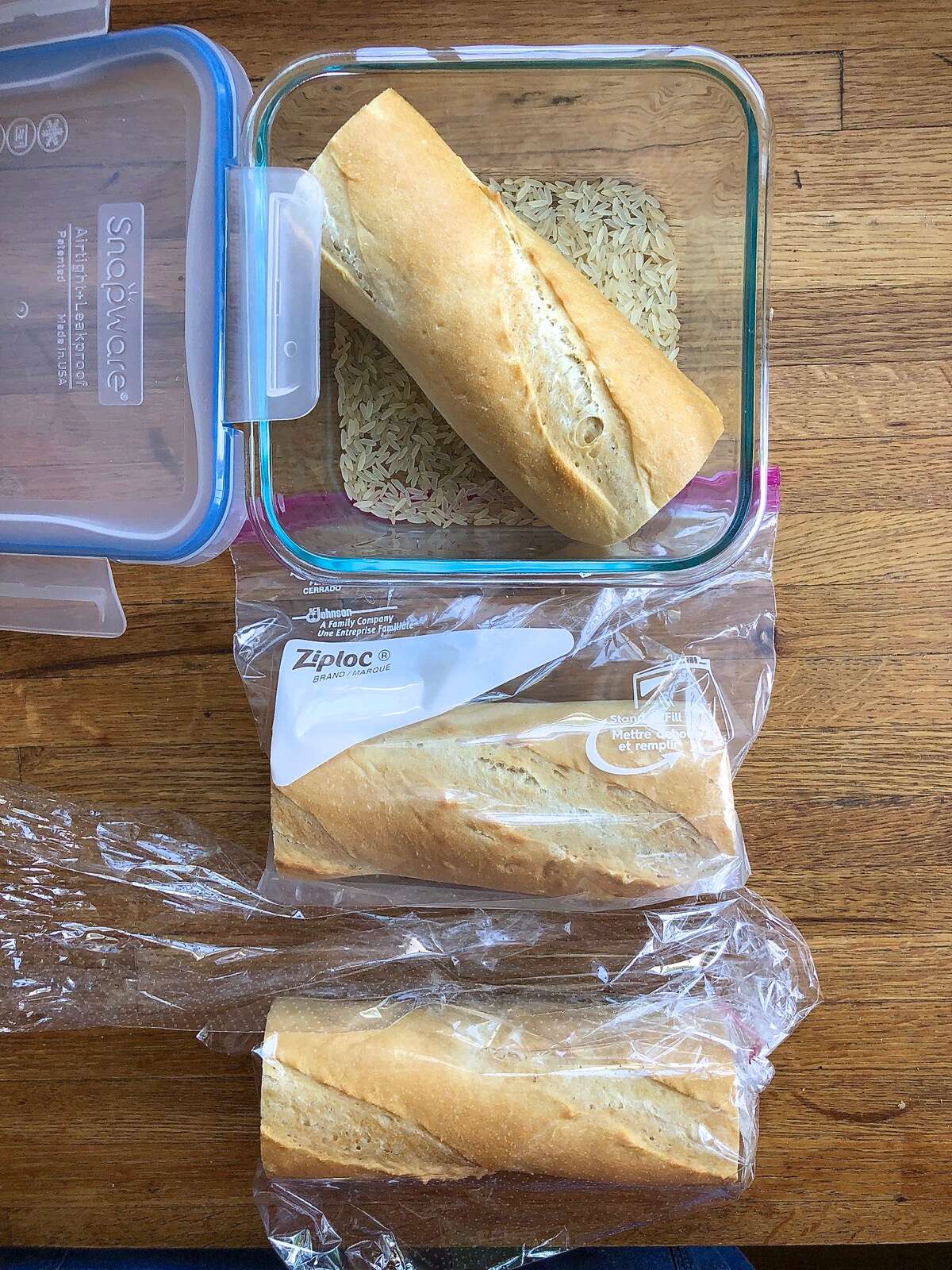 In the course of testing the various bread-storage suggestions I collected from my fellow bakers, I also came across a surprising result: storing bread in a closed container with uncooked rice helps keep it from molding.

I tested three baguette chunks side by side: one in a glass container with rice, one in a plastic bag, and one in a micro-perforated cellophane bag (the kind crusty breads are often sold in at the supermarket).

After five days, the baguette in the perforated bag was a goner; I didn’t even try to refresh it. In fact, it had become unbearably hard after just 24 hours.

The baguette in the plastic bag, though still soft, was starting to mold. But the baguette in the glass container sitting atop a layer of rice, while soft like its companion in plastic, showed no signs of mold. Apparently the rice absorbs just enough moisture to make the loaf less attractive to mold spores. So if your bread is prone to molding at room temperature, try storing it with dry rice.

For optimal bread storage, check out our all-purpose bread bags. Or if you'd like to bake loaves that stay extra fresh after baking, consider baking Rustic Sourdough Bread or Japanese Milk Bread.

Can you make any recommendations for a bread box? My 2lb loaves from my Zojirushi bread maker make it hard to find one large enough. Thank you.

We don't have a particular brand in mind, Sue, but I would recommend looking for a larger one with a shelf in the middle so that you might be able to remove the shelf and simply have one extra tall space for storage. Best of luck finding something that works for you and your homemade breads!

Have you tried testing bread in beeswax wraps? Seems to work for me, saving the environment from one more plastic bag.

Yes Nancy, we love Bee's Wrap too! Here is the one that we like most when it comes to storing bread https://shop.kingarthurbaking.com/items/bees-wrap-bread-wrapper . Happy Baking!

I LOVE that Kansas flour bag. I grew up 30 minutes from the flour mill this was originally made for (before I was born, however). May I asked where you I found it?

Hi Devin! So glad it had some nostalgic value for you! This flour bag is a product that we haven't sold for several years but is a vintage item of our merchandise. Happy Baking!

Would probably be a bestseller today. I’d buy a few.

I slice an entire loaf of bread as soon as it has cooled, then place patty papers between the slices. That way I can wrap and freeze the loaf and easily remove one slice or as many as I wish and pop the rest of the loaf back into the freezer.

Thanks for offering this tip, Eleanor!

Just a thought. Can the rice hack be used with a ziplock bag instead of a glass box? My breads are generally a little e bigger for the glass boxes I have.