Who doesn't like garlic bread, right? Buttery and blissfully delicious; soft (but with a crusty edge), it's a family-and-friends favorite. Now add your favorite herbs; turn the usual flat loaf into luscious slices of pull-apart bread; and start the party! Our March challenge, Butterflake Herb Loaf Bakealong, is a new path to garlic bread bliss.

And the best part?

You can also choose to take the dough and shape it into interesting rolls (think fan tan and cloverleaf), or even a classic monkey bread. However you handle it, the dough is easy to work with; the filling comes together quickly, and assembly is simple. 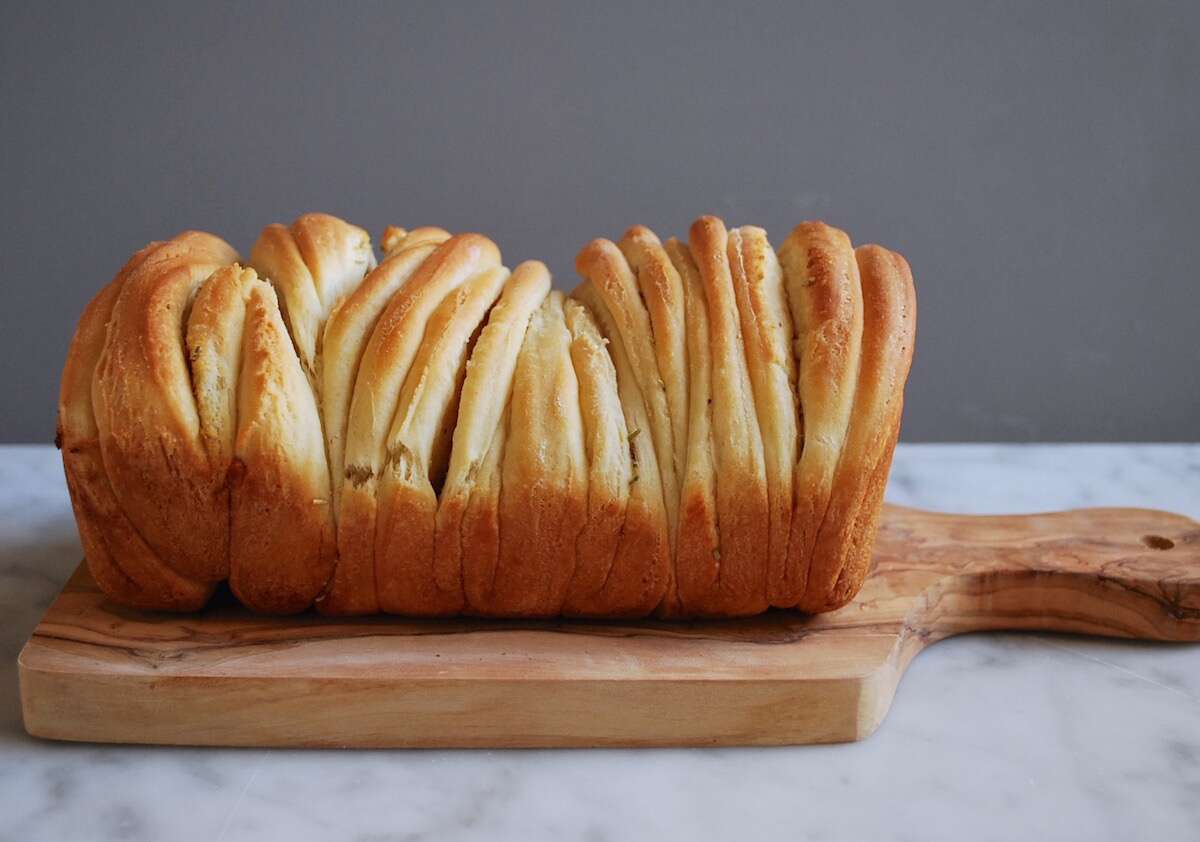 Ready to take the Bakealong challenge?

Start with the dough

Combine the milk, butter, sugar, and salt in a microwave-safe measuring cup or bowl; or in a saucepan. Heat, stirring, until the butter melts. Let the mixture cool to lukewarm, no warmer than 110°F if you have a thermometer. If you don't have a thermometer, the liquid should be cool enough that you can hold your finger in it comfortably.

Transfer the milk mixture to a mixing bowl, and add the eggs, yeast, 4 cups of the flour, and the potato flour and mix to form a shaggy dough.

Use your hands, a stand mixer, or your bread machine set on the dough cycle to knead the dough until it's smooth. The dough will remain somewhat sticky, but should definitely form a ball. During the summer, or in a warm/humid climate, you'll probably find that you need to add the remaining 1/4 cup flour. 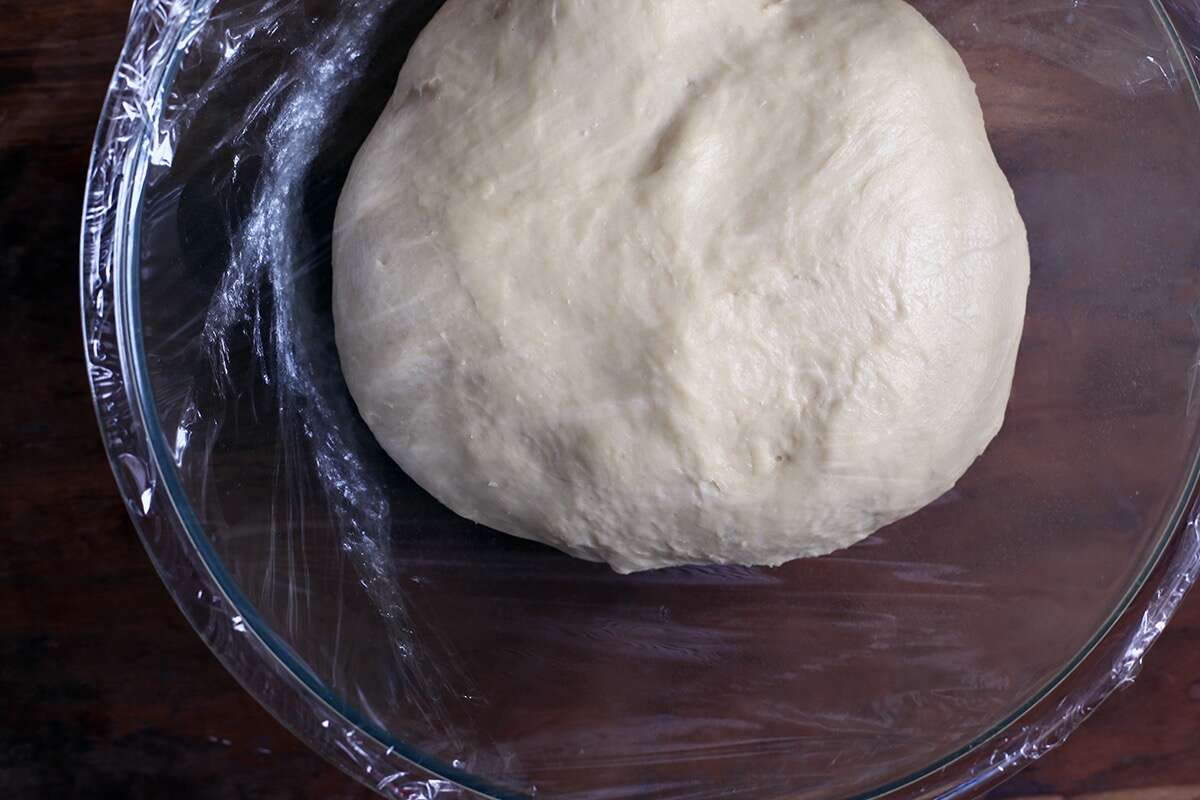 Place the dough in a greased bowl, cover, and let it rise for about 90 minutes, until it's puffy though not necessarily doubled in bulk. 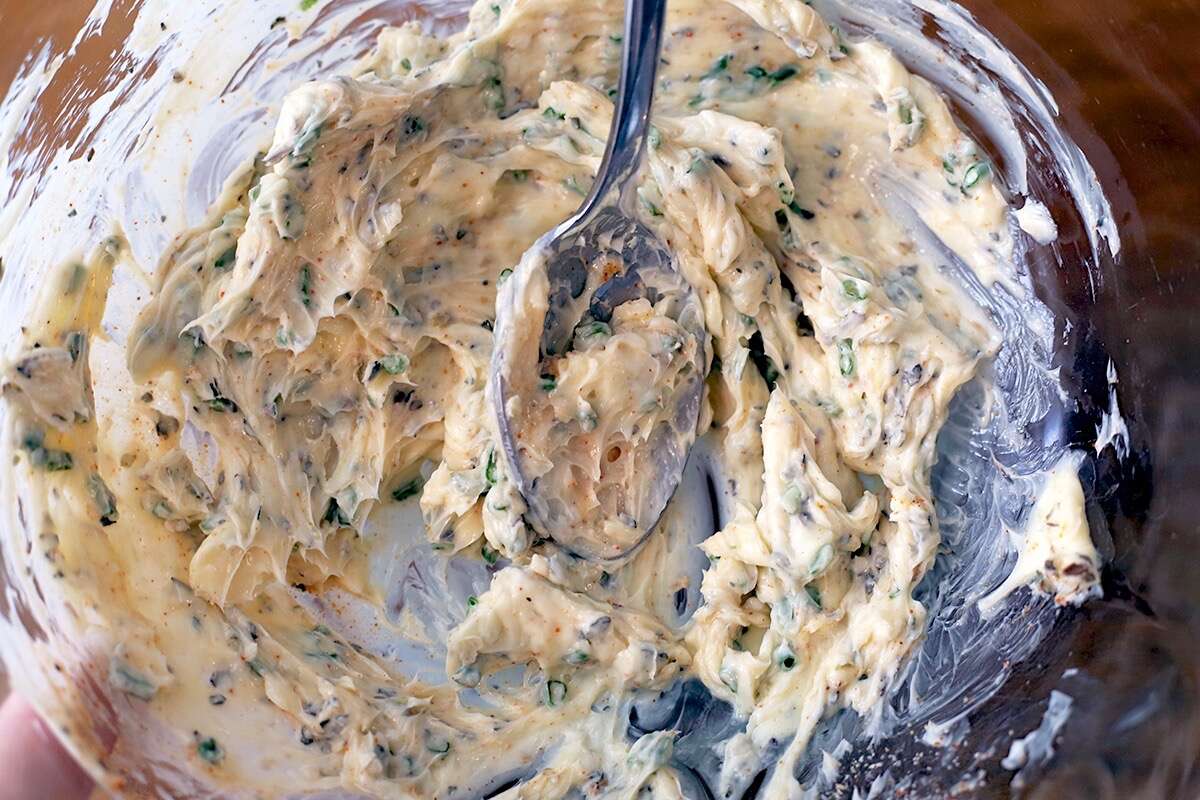 While the dough is rising, place the following filling ingredients* in a bowl.

*Alter the filling to taste by substituting your favorite dried or fresh herbs for those listed above.

Mix everything together, and set aside.

After the dough has risen, deflate it and divide it in half. Working with one piece at a time, place the dough on a lightly greased or lightly floured surface (your preference), and roll/pat it into a 12" circle (or square) about 1/4" thick. 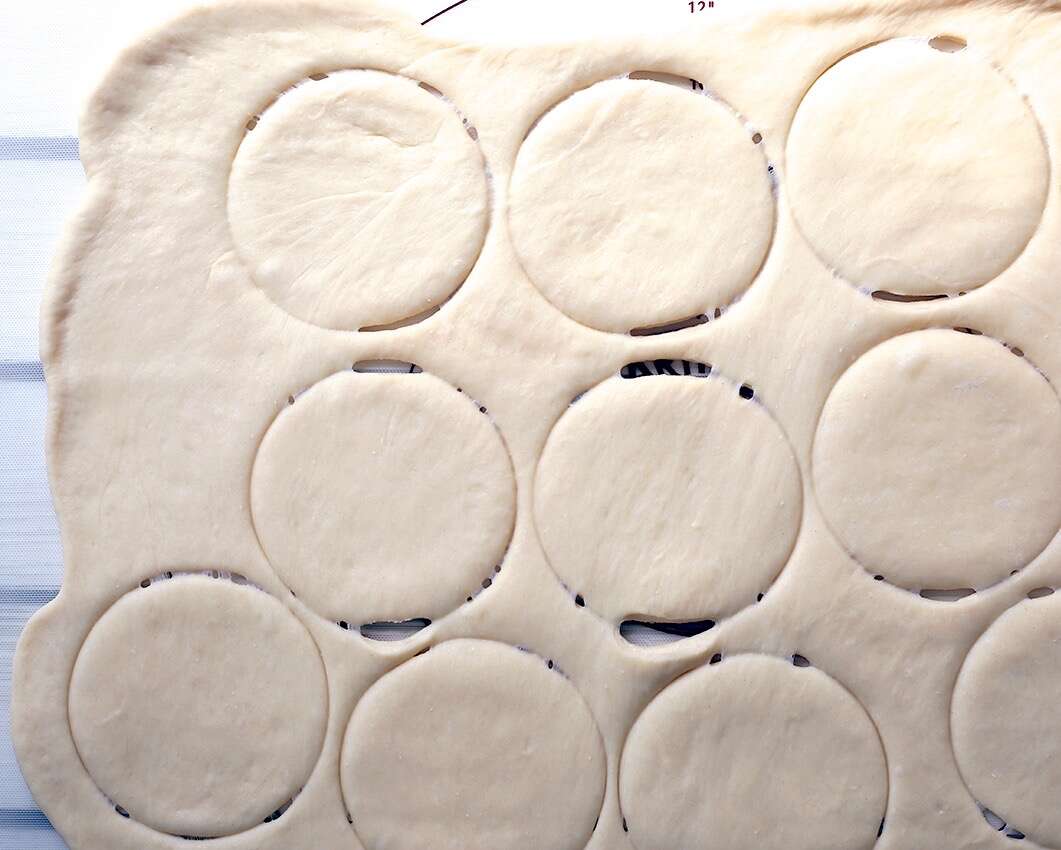 Cut 3 1/2" to 4" circles with a cutter, large canning jar lid, or English muffin ring; you should have about 10 circles. 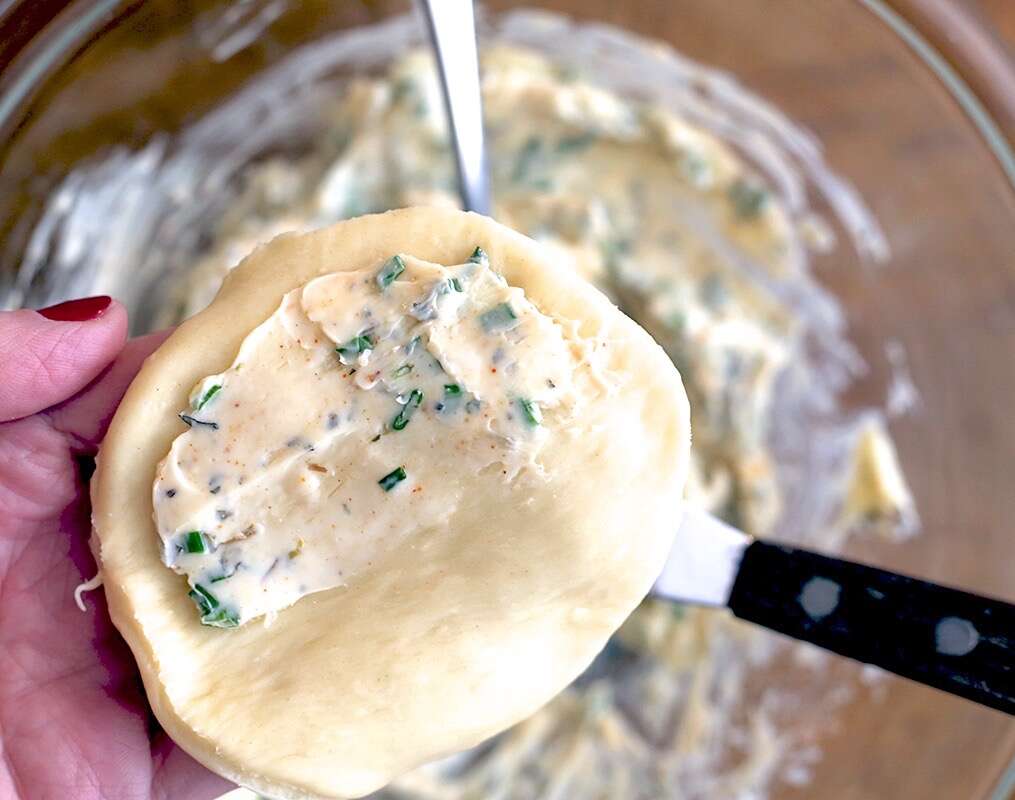 Spread about 1 teaspoon filling on each of the circles, covering half the circle. 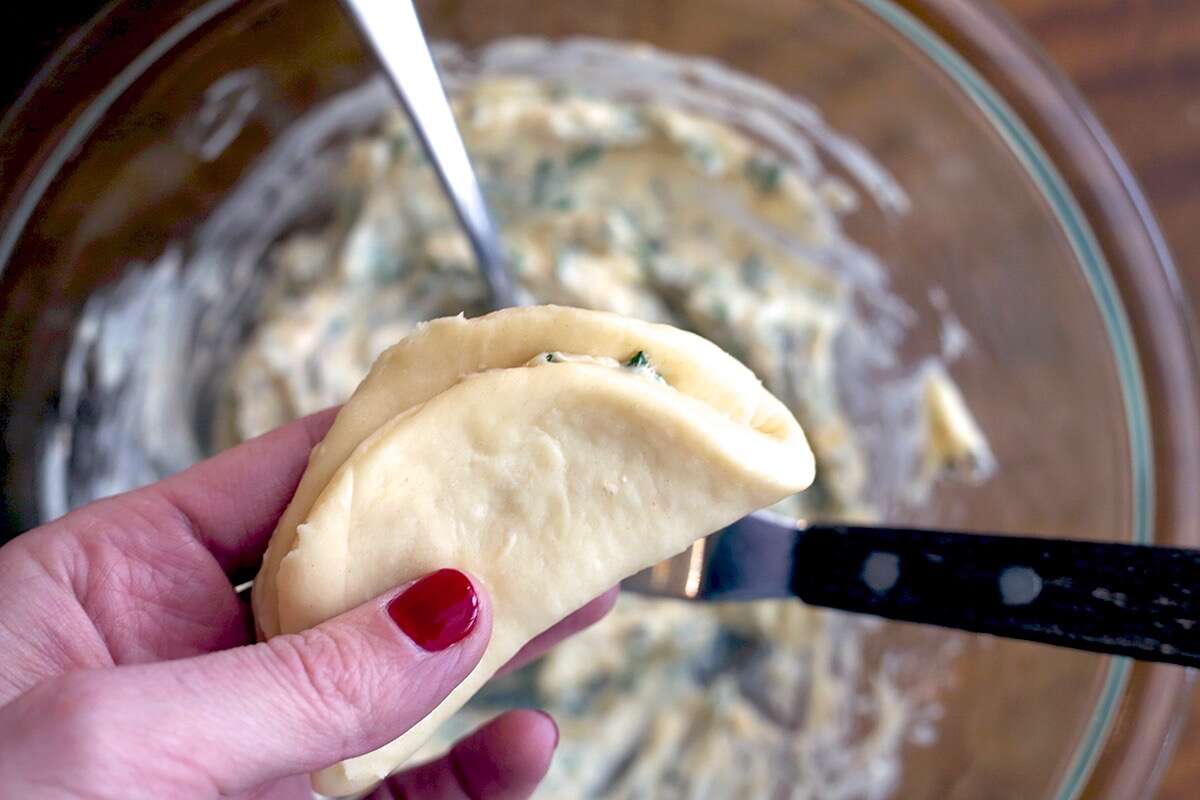 Fold the circles in half. 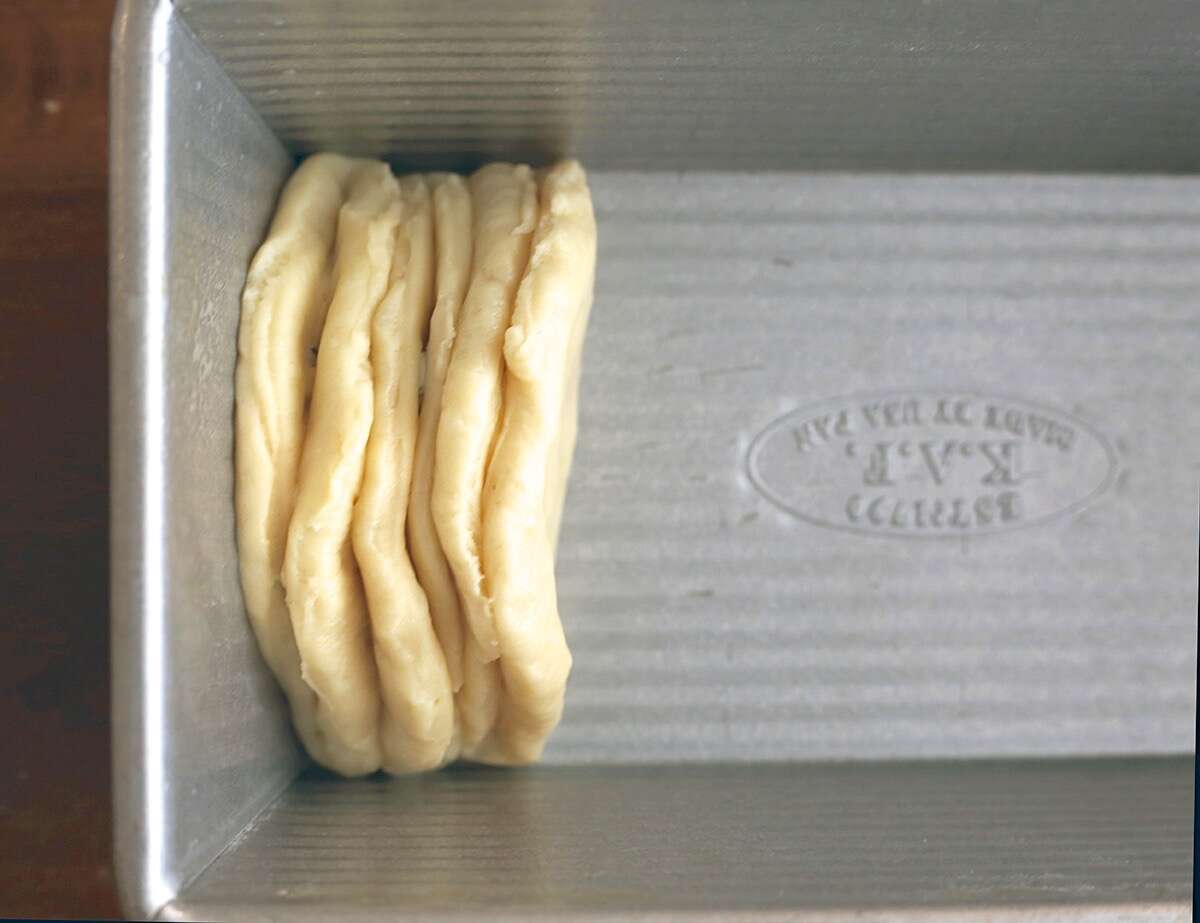 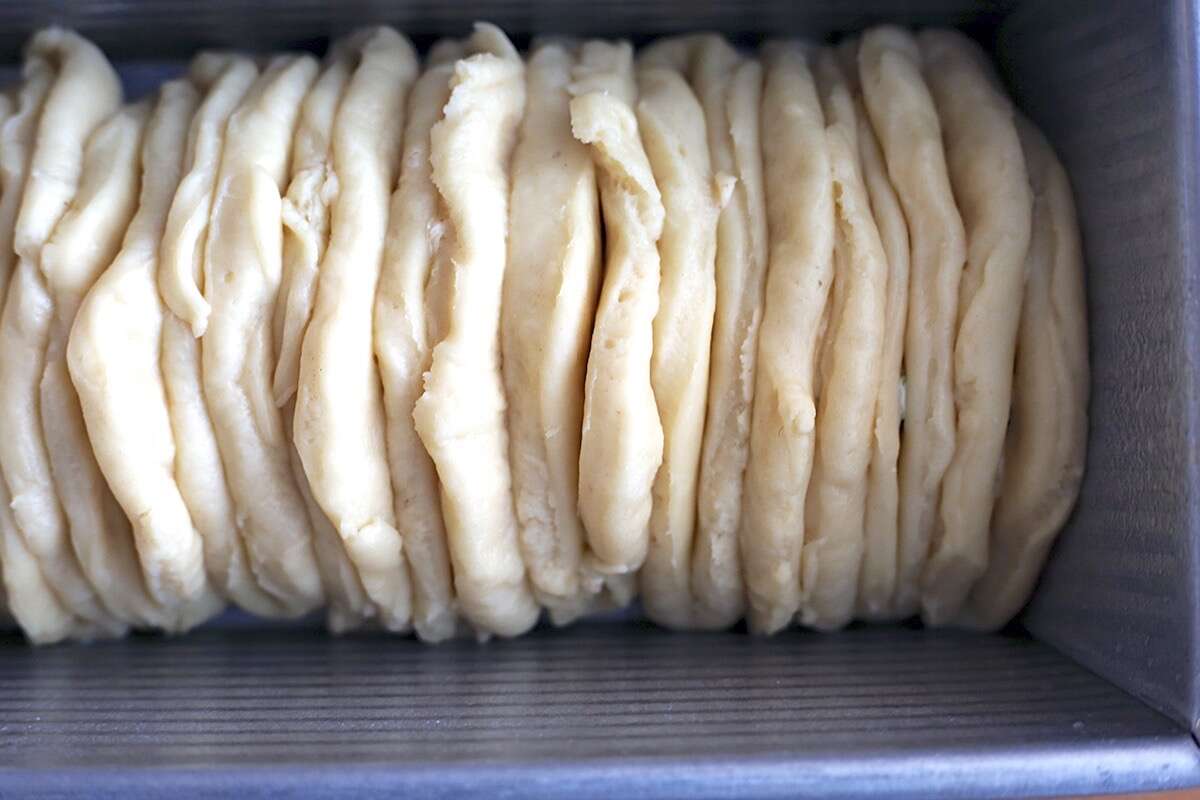 Shape any scraps into small rolls; or butter them, and pile them into the wells of a standard muffin pan. They won't look pretty, but they'll taste just fine. Let them rise and bake along with the bread, baking them for about 15 minutes, or until golden brown.

Cover the pan(s) with greased plastic wrap and let the dough rise until you can see that it's expanded slightly; this can take up to 90 minutes, depending on the warmth (or lack thereof) of your kitchen.

Uncover the loaves, and bake them for 25 to 30 minutes. Bread baked in a ceramic pan will take 5 to 7 minutes longer to bake than in a metal one. Tent the loaves with foil if they look like they're browning too quickly. 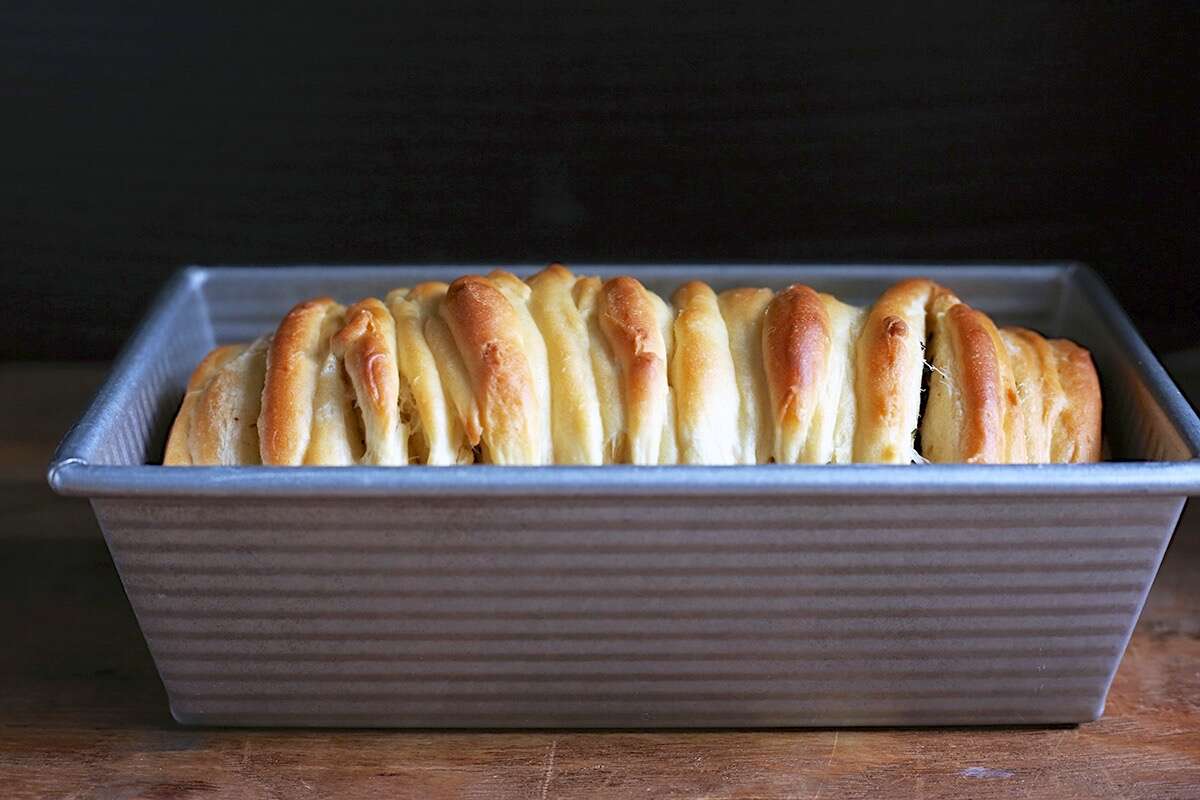 Remove the bread from the oven. Brush it with additional melted butter, if desired. 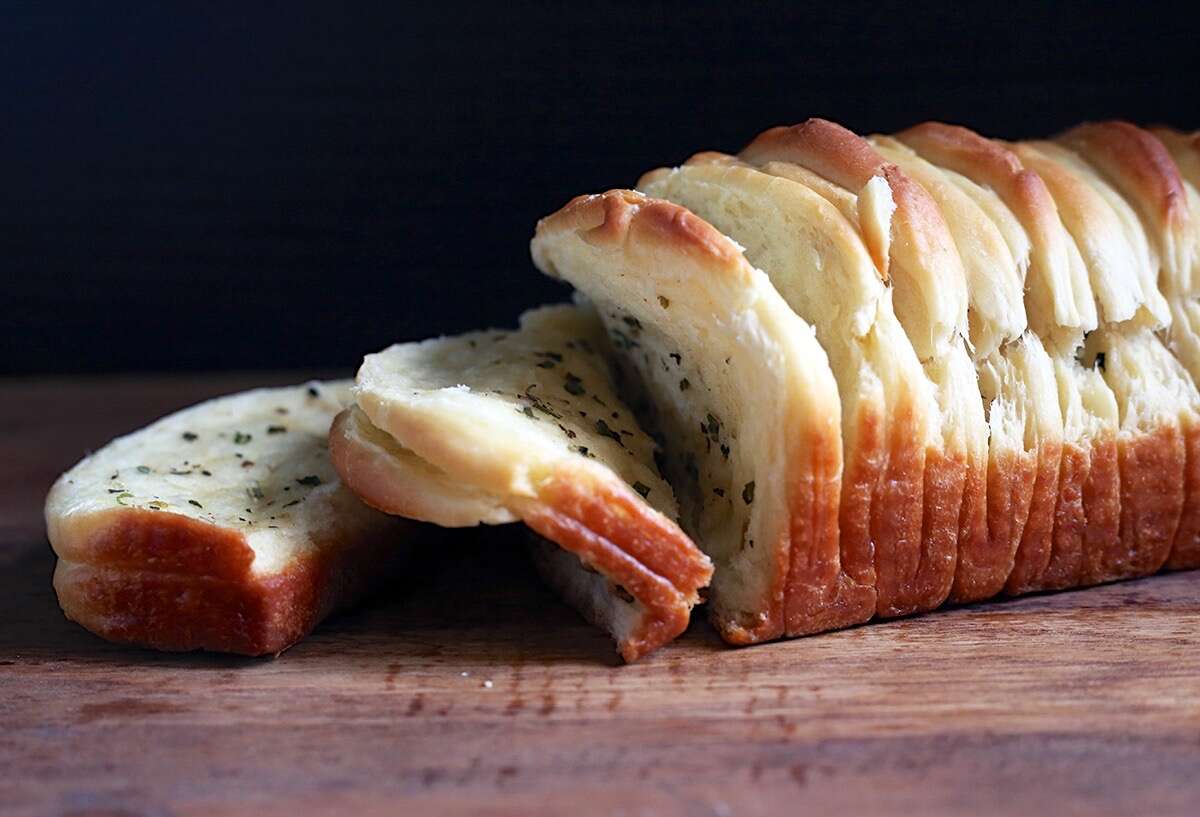 Turn the bread out of the pan, and serve it warm, pulling off individual pieces. 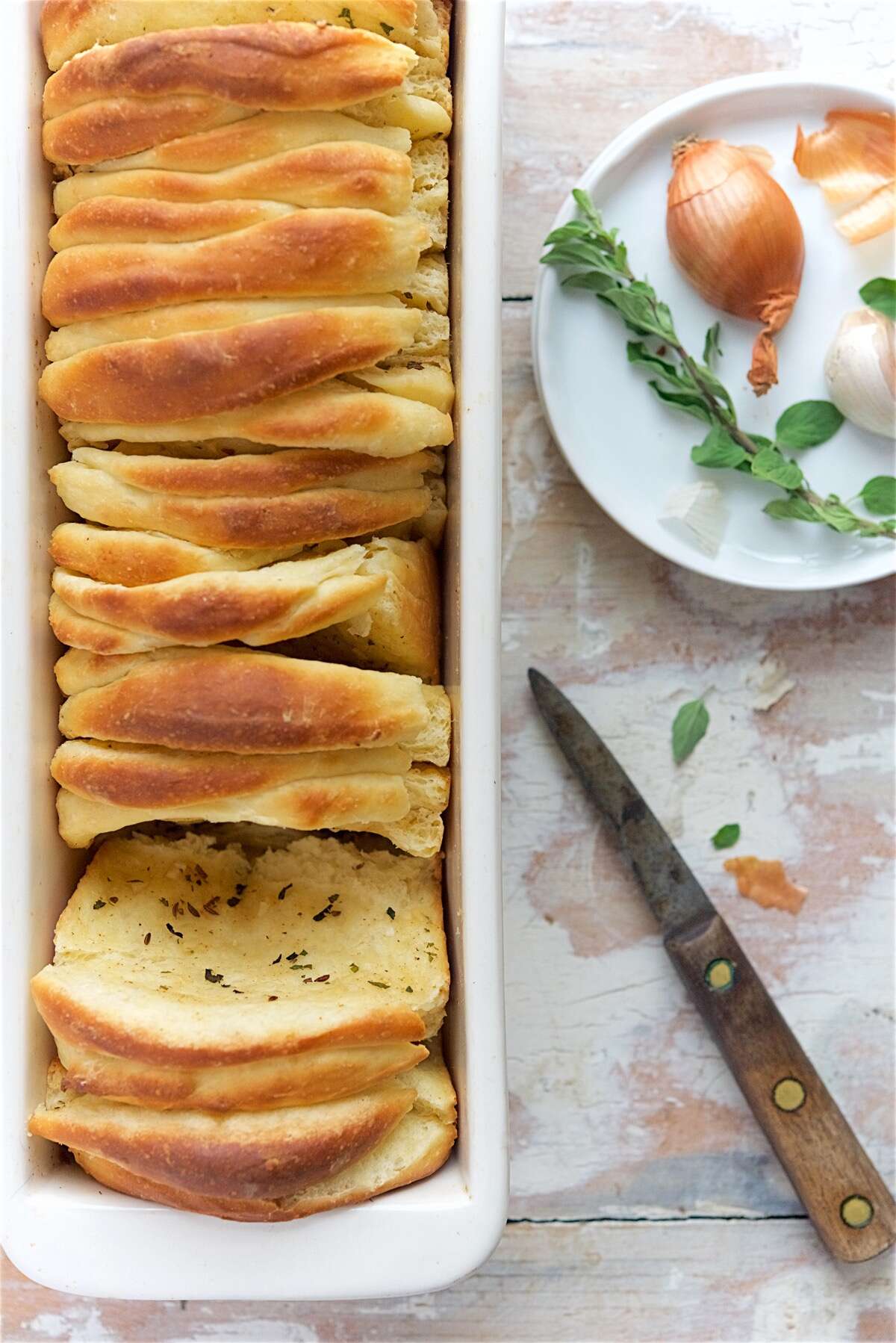 Did I hear leftovers? Probably not!

Now, this recipe makes two loaves; but if you'd like to make one loaf and a batch of rolls, go for it! 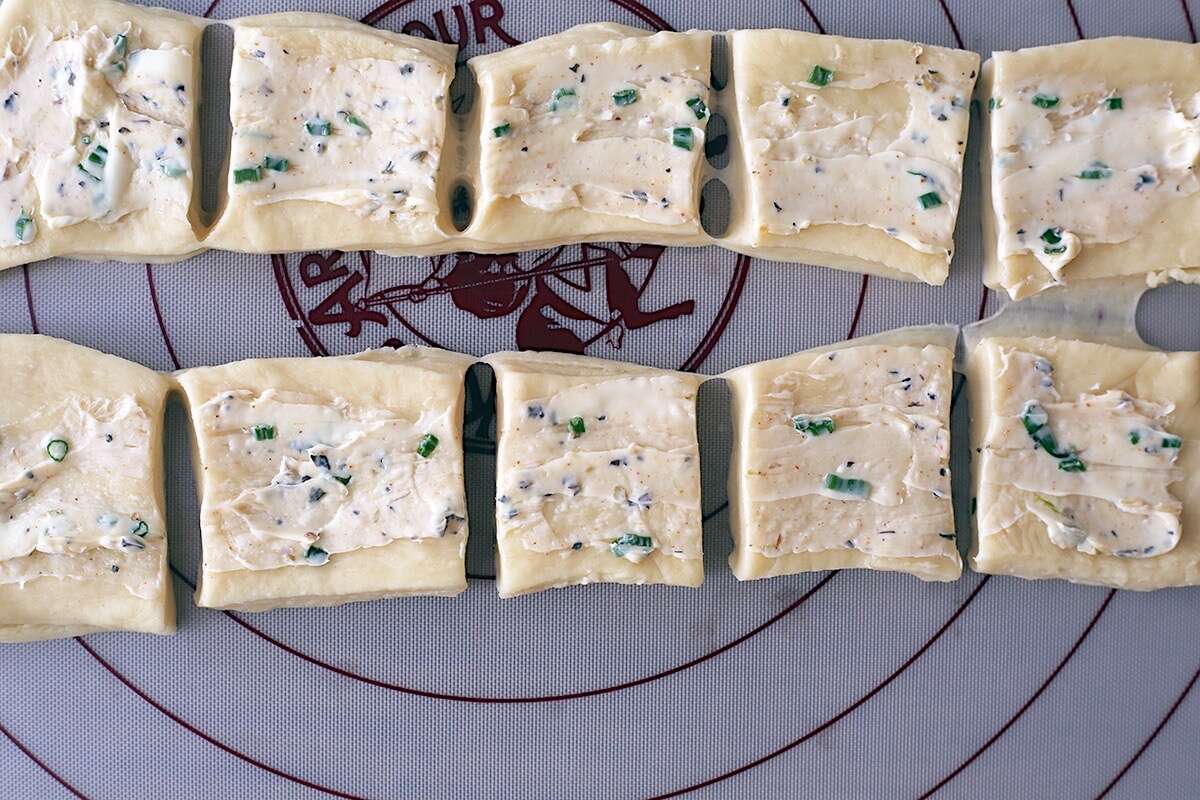 Roll half the dough into a rectangle about 1/4" thick; spread it with half the filling.

Cut the dough into 1 1/2" to 2" squares. Don't fuss; they don't have to be exactly square, nor do they have to be precisely that size. Your goal is 48 pieces of dough, but again, no worries if you're a bit short or somewhat over. 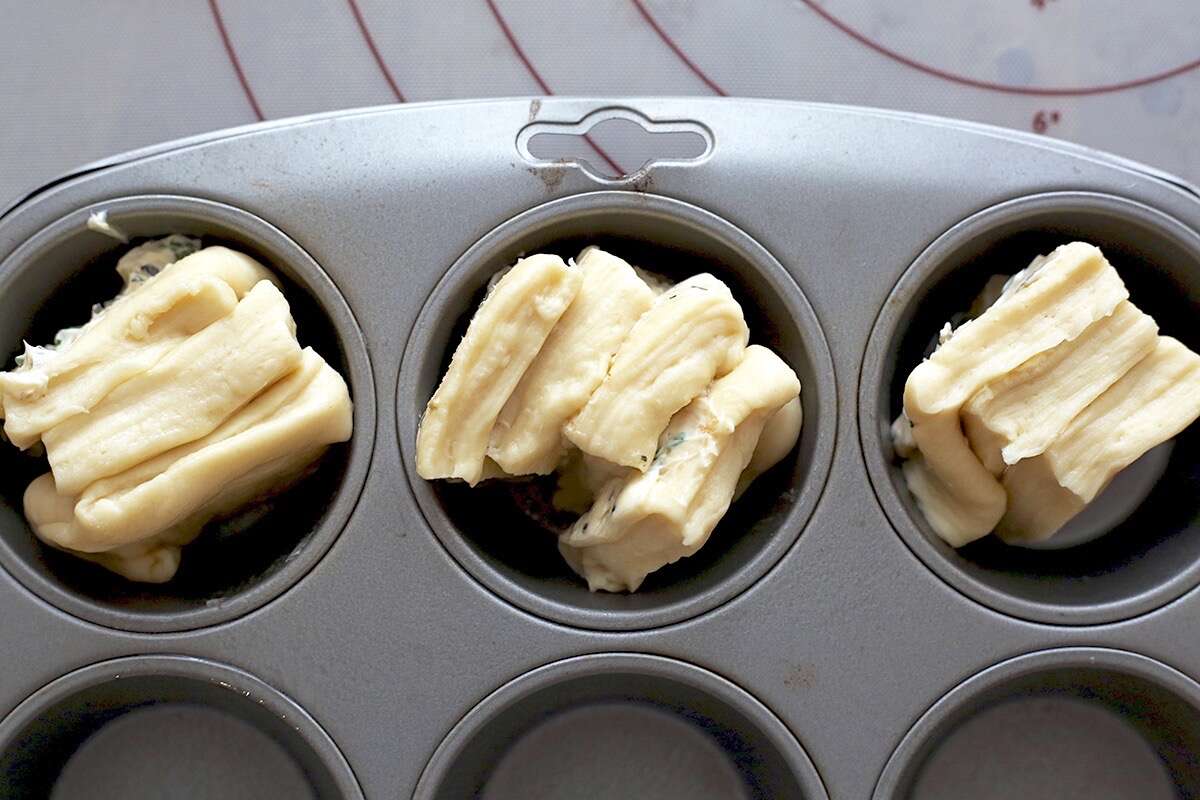 Stack four squares, and place them on end in the lightly greased well of a standard muffin pan. Repeat with the remaining squares, filling the pan.

Bake the fan tans in a preheated 350°F oven for 18 to 20 minutes, or until they're a light golden brown. 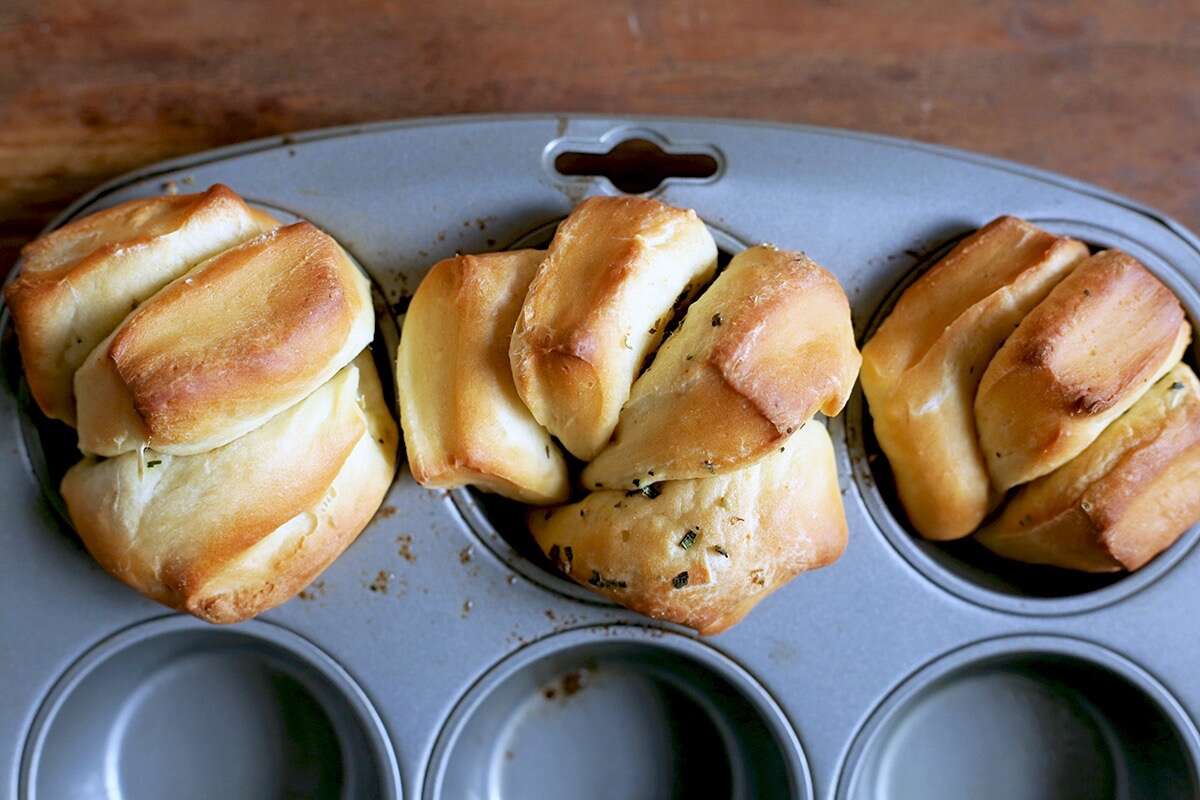 Remove them from the oven, and serve warm.

Cloverleaf rolls are simple and pretty, too. 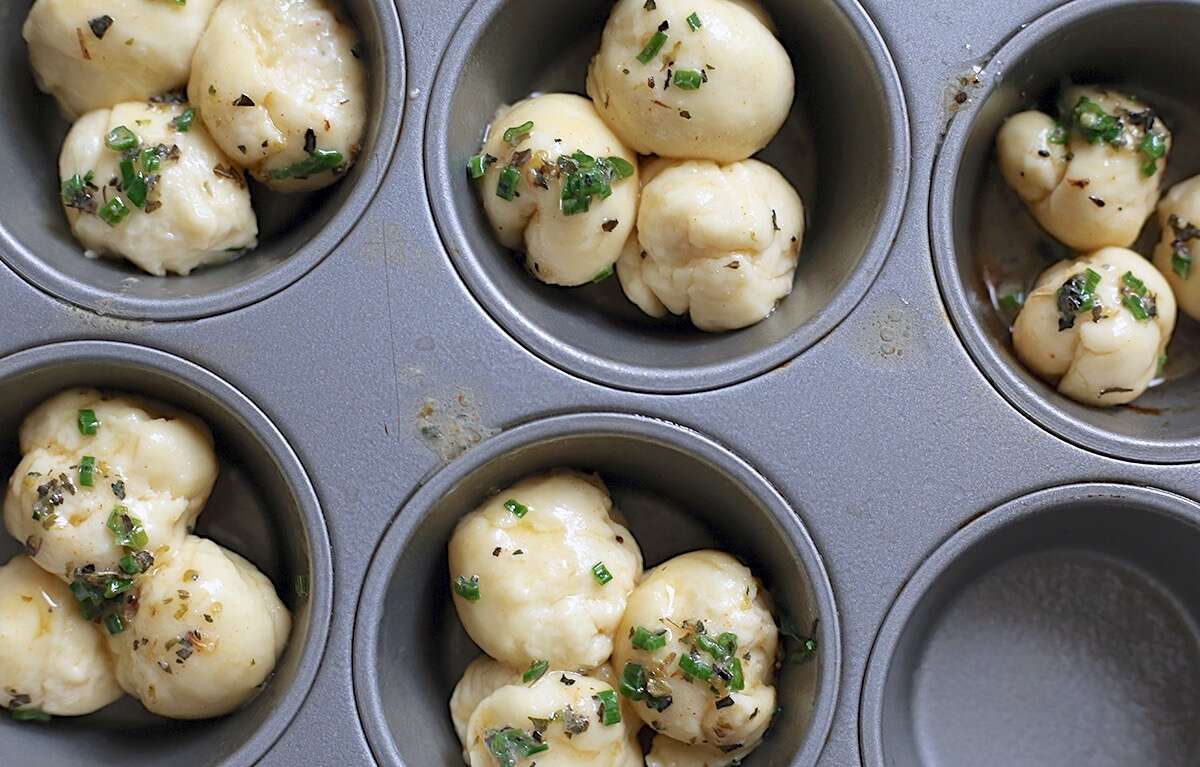 Divide half the dough into 36 pieces, each about the size of a small chestnut. Roll the pieces into balls (rough or smooth, up to you).

Place three balls of dough in each lightly greased well of a 12-cup standard muffin pan. Melt half the filling, and drizzle it over the dough balls.

Let the rolls rise until they've expanded a bit, covering the bottom of the pan completely and starting to rise upward. 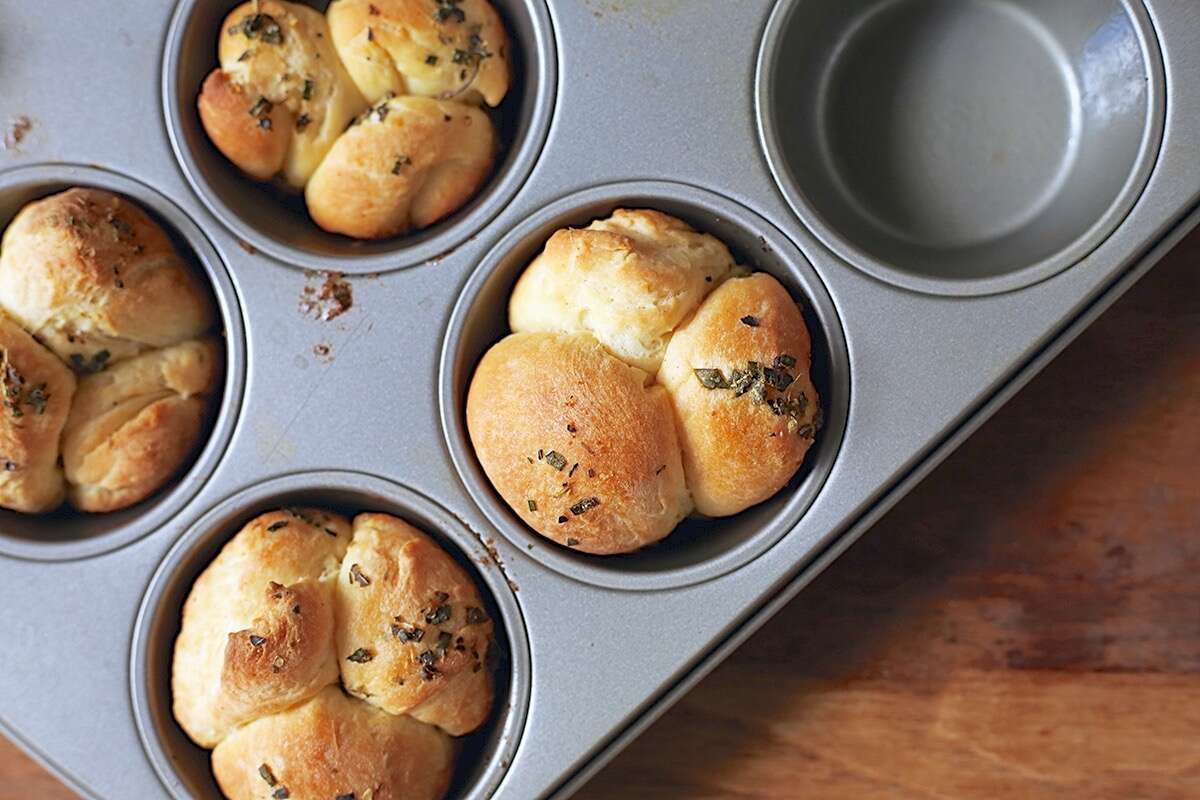 Bake the cloverleaf rolls in a preheated 350°F oven for 18 to 20 minutes, or until they're a light golden brown.

And finally, here's a quick and easy way to make monkey bread. Divide half the dough into 24 balls. Melt half the filling, and pour it into the bottom of a lightly greased 9" round cake pan, reserving about 2 tablespoons of the filling to brush on the bread after it comes out of the oven.

Place the dough balls in the pan, and shake the pan to coat them with the melted filling. Then space them in the pan so they're not touching one another.

Let the dough balls rise until they've expanded to touch one another, and have risen upward a bit.

Bake the monkey bread in a preheated 350°F oven for 20 to 23 minutes, or until it's a light golden brown.

Remove from the oven, and brush with the remaining melted filling. Serve warm. Dip individual pieces in marinara sauce, if desired.

Now, what about you folks baking gluten-free? It's not advisable to try to turn a standard yeast recipe into a gluten-free recipe, so you won't be able to use the dough recipe above. However, we have a suggestion: Make the dough for our Gluten-Free Cinnamon Rolls, omitting 2 tablespoons of the sugar.

Make the filling from the Butterflake Herb Loaf recipe above. Pat out the gluten-free dough as directed in the cinnamon roll recipe. Melt the filling, and spread half of it over the dough (reserve the rest for later). Add a sprinkle of Parmesan cheese too, if desired. Roll the dough up the long way, and cut into 12 slices. Bake according to cinnamon roll instructions. Remove the baked rolls from the oven, and dip the top of each into the remaining melted butter/herbs. 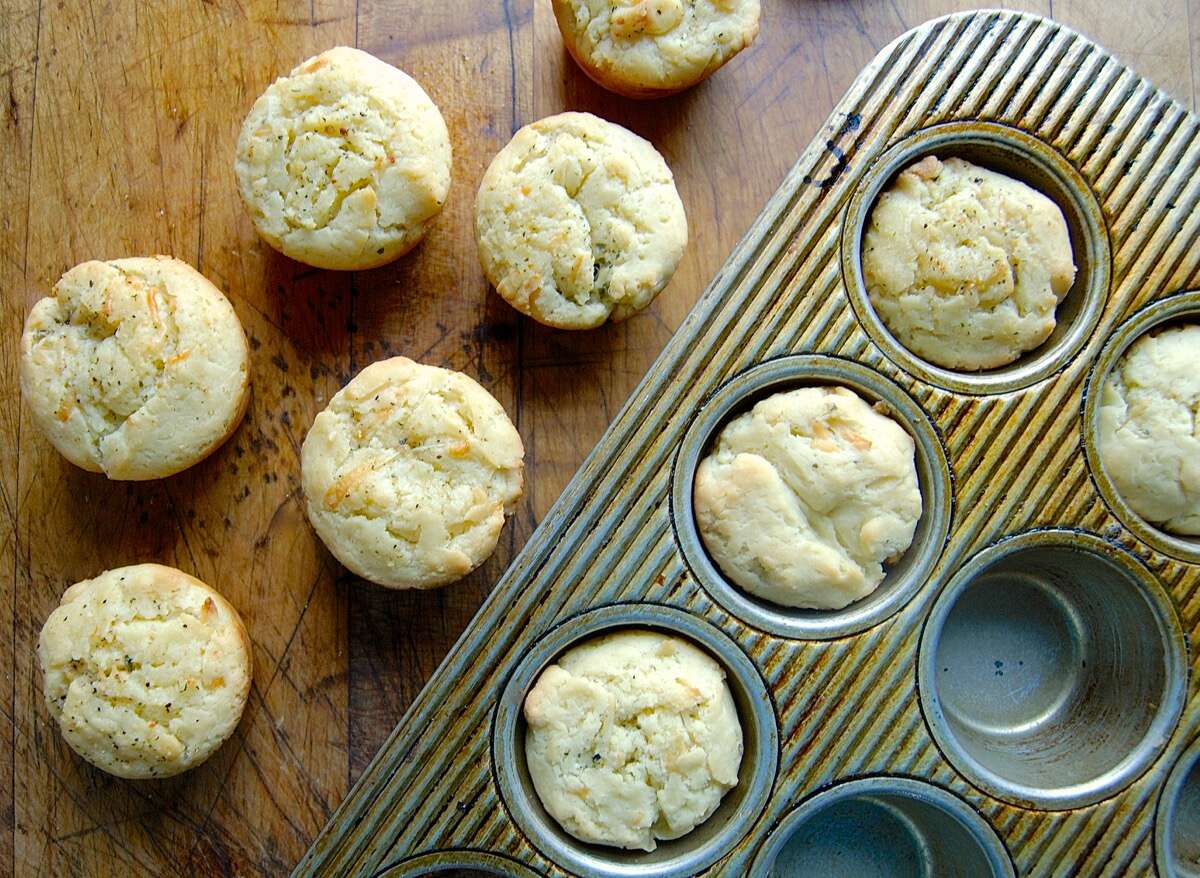 If I’m using the tea loaf pan do I still fold the circles in half or not? Thanks ☺️

Hi Steph! You will indeed want to fold the circles in half when making this in a tea loaf pan however it will only make one loaf this way instead of two 8.5 x 4.5 loaves. Happy baking!

Started this last night. Did the batch rise for 45 min in the Instant Pot (this is what I always do if I'm in a hurry) and shaped as indicated. Then I popped it in the fridge over night. Took it out and let it come to room temp and rise a bit and popped it in the oven. It came out great.
The only problem I have is that there's not enough of it. It would have been perfect for 1 1/2 loaves, but it's too big for just one loaf and too small for 2. Did I do something wrong?

Hi Cheryl, did you happen to use 9" X 5" pans? These loaves will definitely look on the small side when using that size pan. It's not a high riser, even in the recommended 8 1/2" X 4 1/2" pan, but it should fill this size pan nicely during baking.

I made this recipe yesterday - absolutely fabulous and it will be my go-to pull apart!

Hi, I just made this today for the first time, very easy to put together, but trying to roll it out or pat it into a circle, is frustrating, since it just keeps shrinking. More kneading, or resting, or maybe I kneaded it too much in my mixer? My finished circles were pretty small after they shrunk up a little. The loaves are on the final rise so don't know how it will turn out but it was a fun recipe even though a little frustrating. Thanks for any tips you can offer for the next time will be appreciated!

Hi Janet, the next time your dough shrinks back, cover it with plastic wrap and let it sit for 10 or 15 minutes. This rest will give the gluten in the dough time to relax and you'll be able to roll out the dough much more easily.

hi, can i share this webpage link on my blog - acookwithin.com? i have a recipe of this amazing butterflake loaf with my version which i want to release tomorrow and want to provide link to your page. Thank you :)