Everything bagels and garlic knots

OK, make believe you can't see the dates at the top of this post. I'm going to give you some names and phrases; see what springs to mind. Do they sound familiar – like, "wasn't that just yesterday?" Or are they simply history – and ancient history, at that?

Oh, and then there's Michael Jackson. To say nothing of late ’70s disco, a Boomer-driven musical trend that trickled into the ’80s before dying a (welcome) death.

And BIG HAIR. Ladies, raise your hands if, looking back, the hairstyle you had during this era – yes, the 1980s – was one you'd just as soon forget.

To me, the 1980s are eminently forgettable. My son was born in the 1980s – as were the vast majority of today's current Millennial generation – but beyond that? Meh.

Thus it was with great joy that I discovered, via Food Timeline, that two of my all-time favorite "small breads" share a birthday: 1988.

Everything bagels and garlic knots, come on down!

Oh, sure, there's some grumbling about who actually "invented" both of these, and when. After all, who wouldn't want to claim rights to these bread icons? But this, to the best of my researched knowledge, is the story: 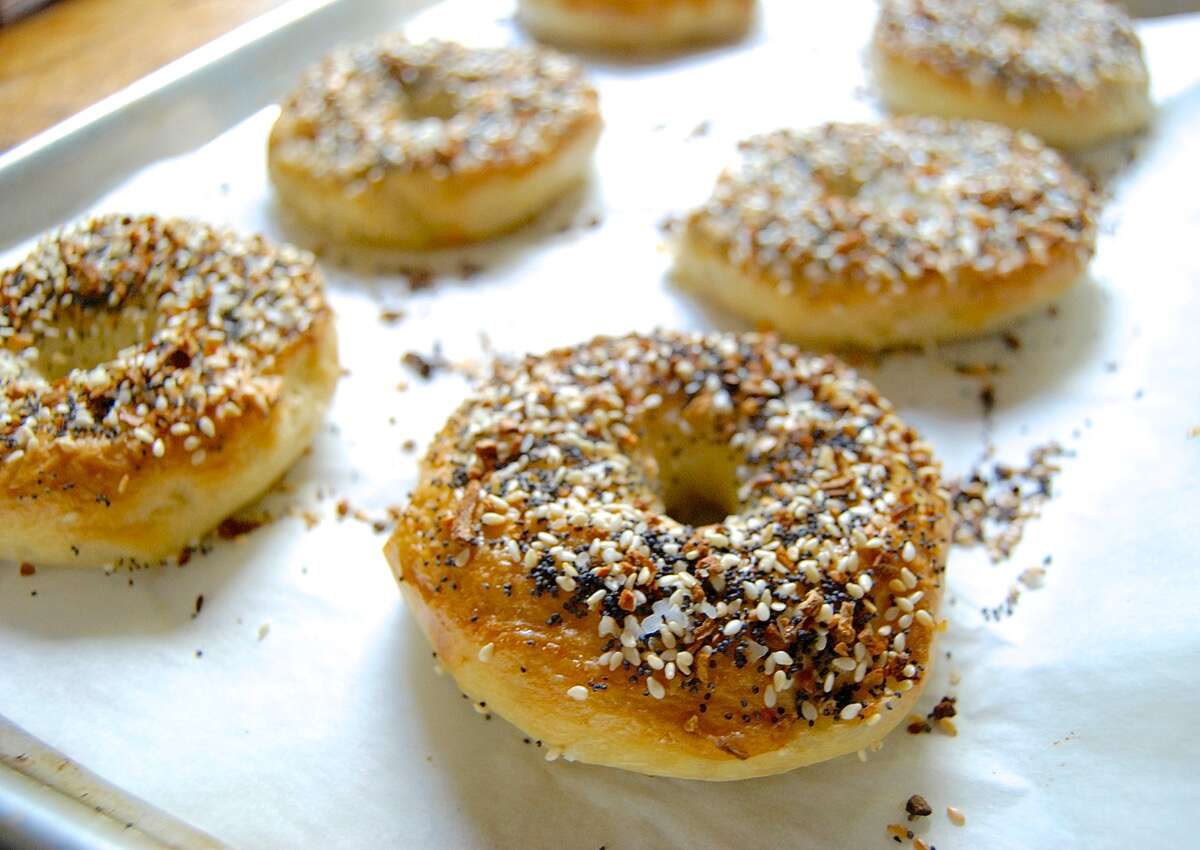 Vaunted food writer Florence Fabricant of the New York Times is credited with the everything bagel's first mention in print, when she described it in her Food Notes column on Aug. 3, 1988:

"Arkady Goshchinsky came here from the Soviet Union 11 years ago. Thanks to friends in the bakery-supply business, three years ago [he] wound up with a bagel store in Forest Hills Queens... Now, the Bagel Baron, as his company is called, has a Manhattan location... The 'everything bagel' is dusted with salt, poppy seeds, sesame seeds, garlic and onion." – foodtimeline.org 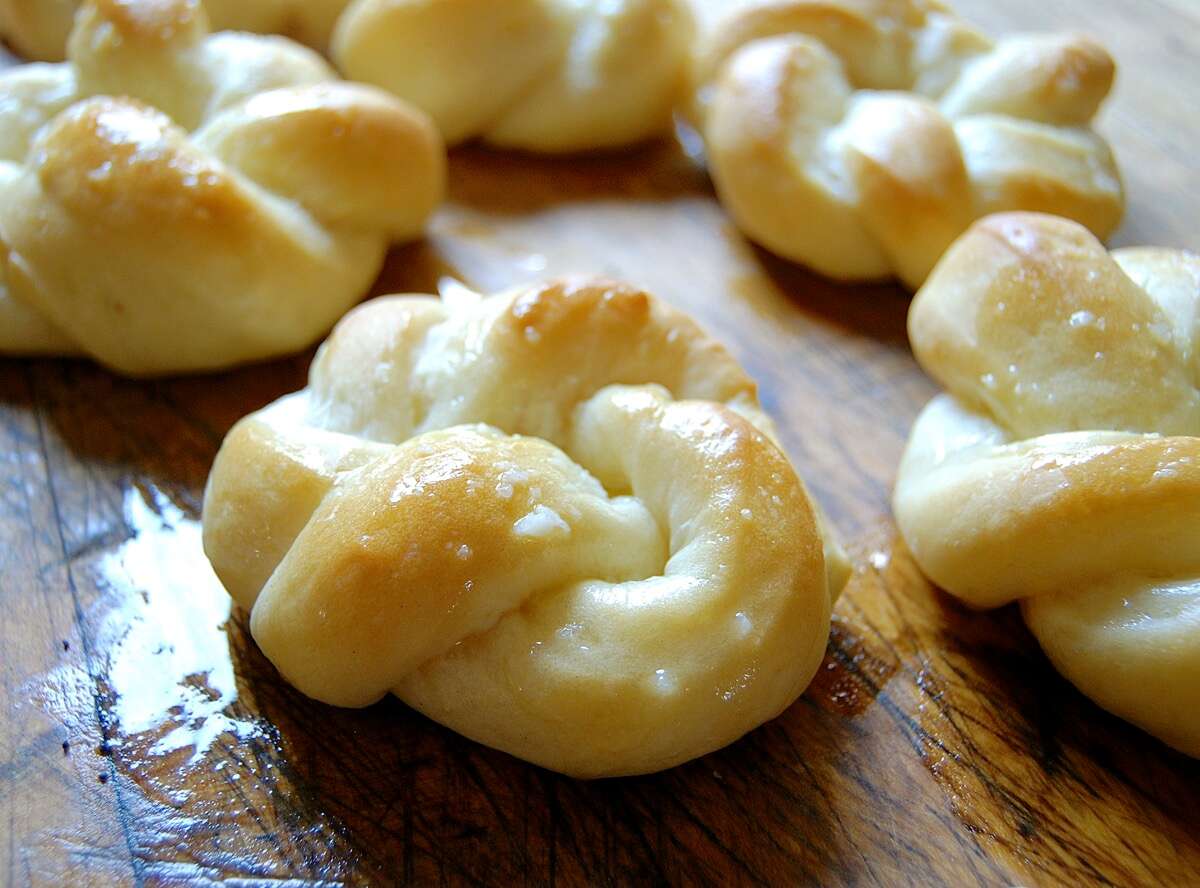 The history of garlic knots is a bit more muddled, with various restaurant and bakery owners stretching back to the 1940s claiming authorship. One thing everyone seems to agree on: garlic knots first saw the light of day on Long Island (so long as you count Queens and Brooklyn as part of Long Island).

Traditionally made from scraps of pizza dough, these oil/butter-soaked, garlic-doused, cheese-tossed rolls have since become a regular part of the menu at Italian-American restaurants and pizza joints across the nation. 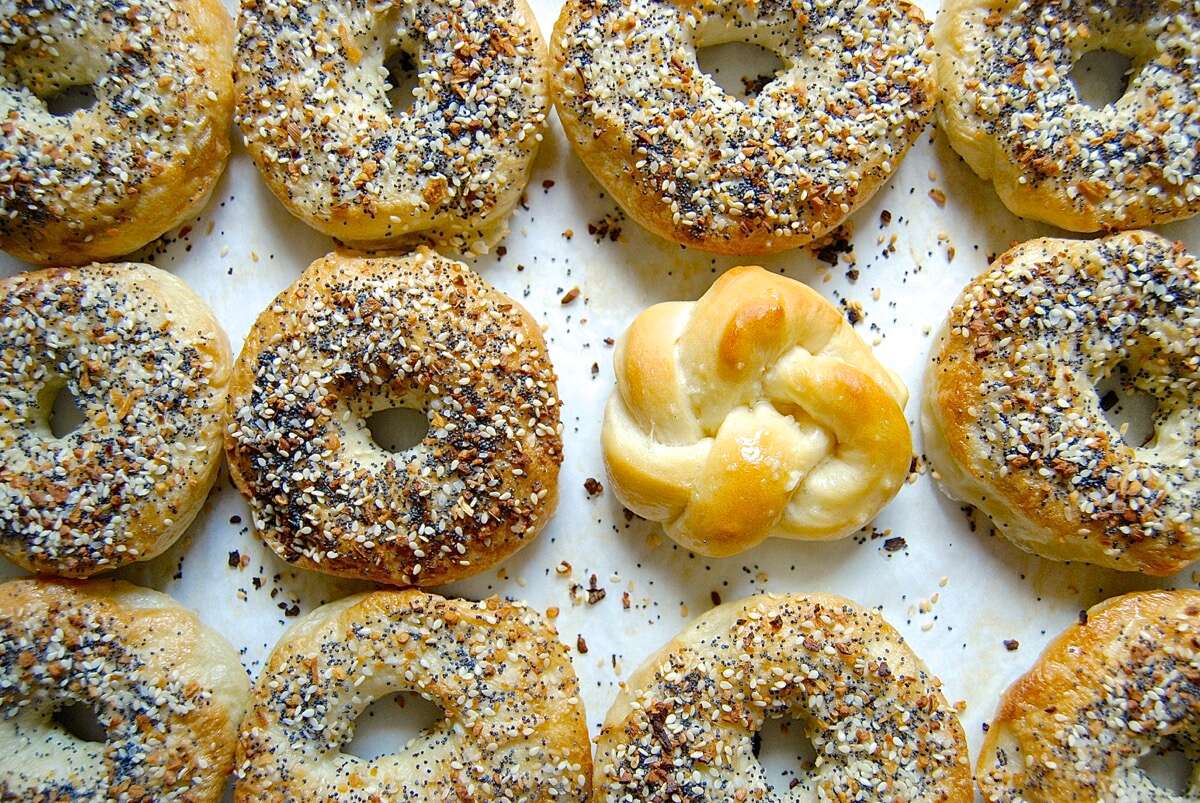 I couldn't resist making a batch of each of these breads in honor of this blog post. You know, for inspiration. I hope these culinary hits from the 1980s inspire you to get out your yeast and flour, too. After all, not everything from the ’80s is forgettable! 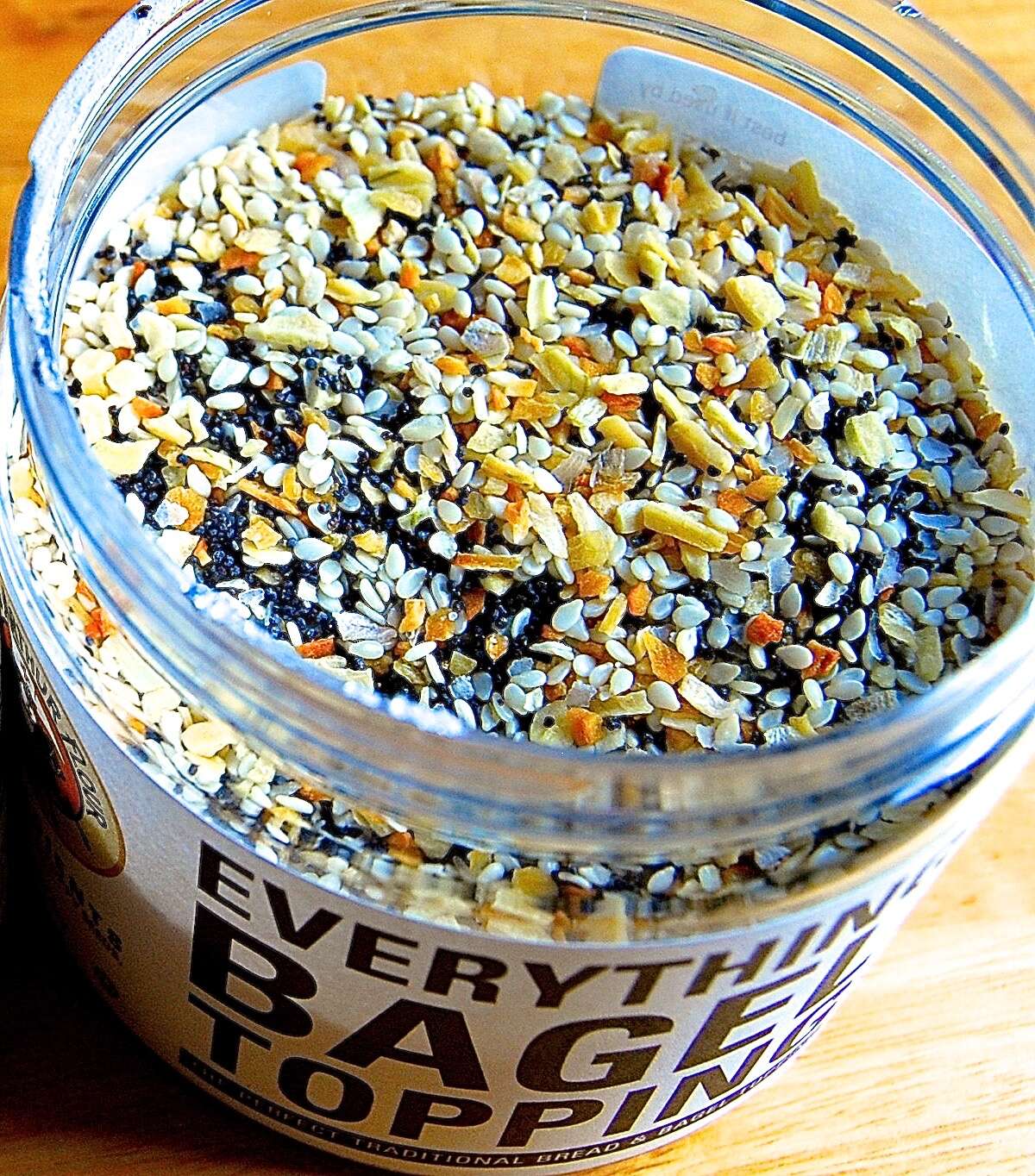 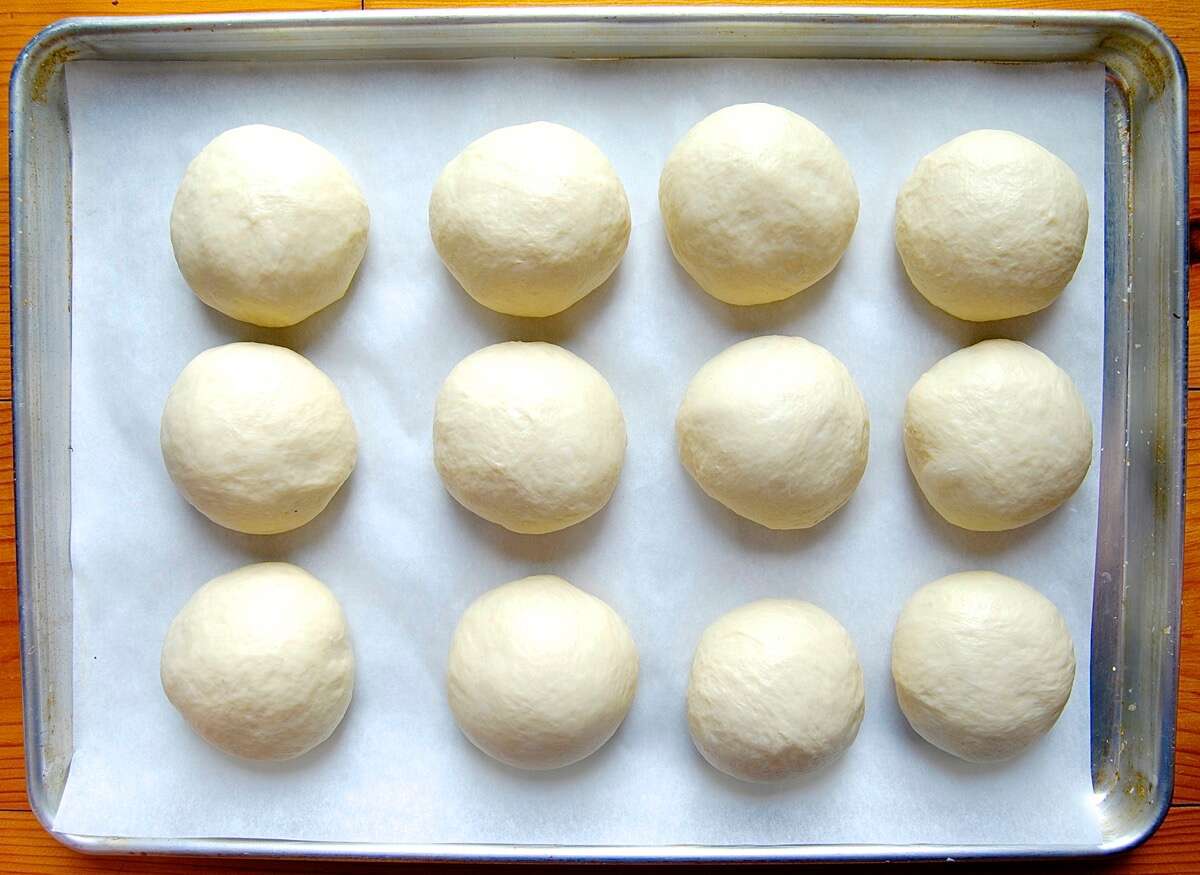 How do you make the hole in your everything bagel?

No, not by rolling out ropes of dough and joining the ends. 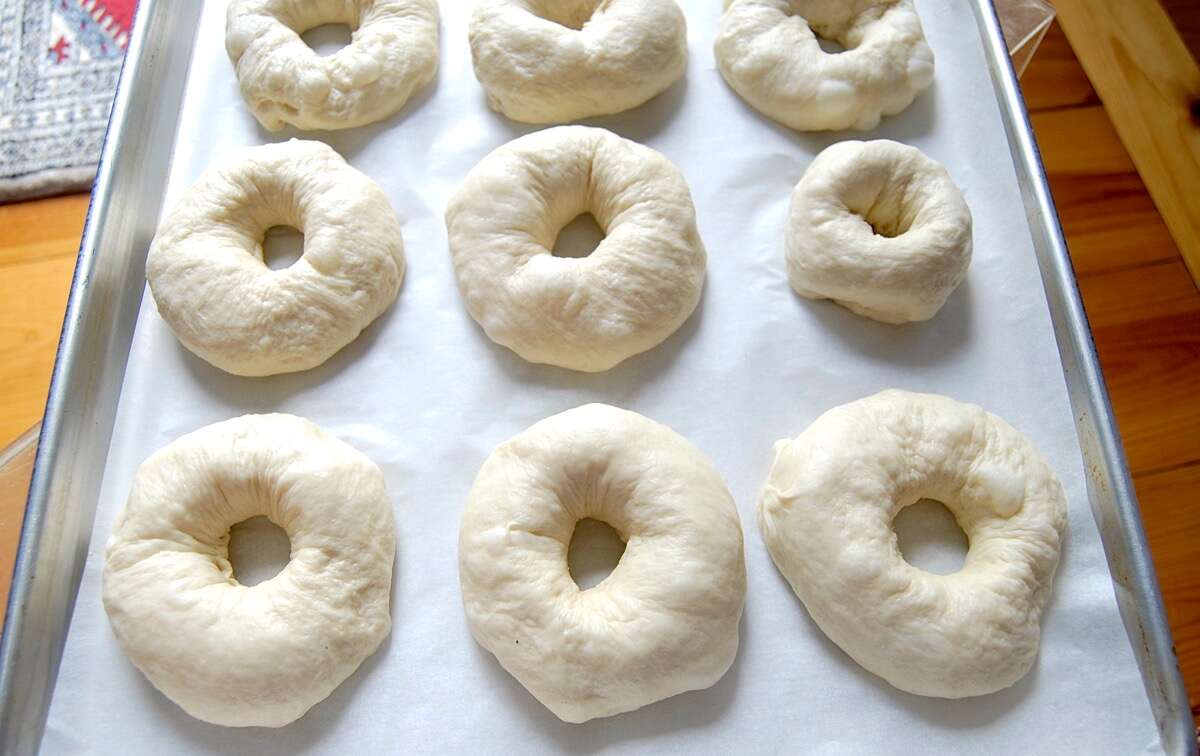 ...then poke a hole in the center of each one and twirl it on your finger to enlarge the hole. For a visual of this, please see our blog post, how to put the hole in the bagel.

Next step: boiling. Is that important?

Yes; simmering bagels atop the stove is what helps give them both their signature shiny brown crust, and their chewiness. Without boiling, bagels are just doughnut-shaped dinner rolls. 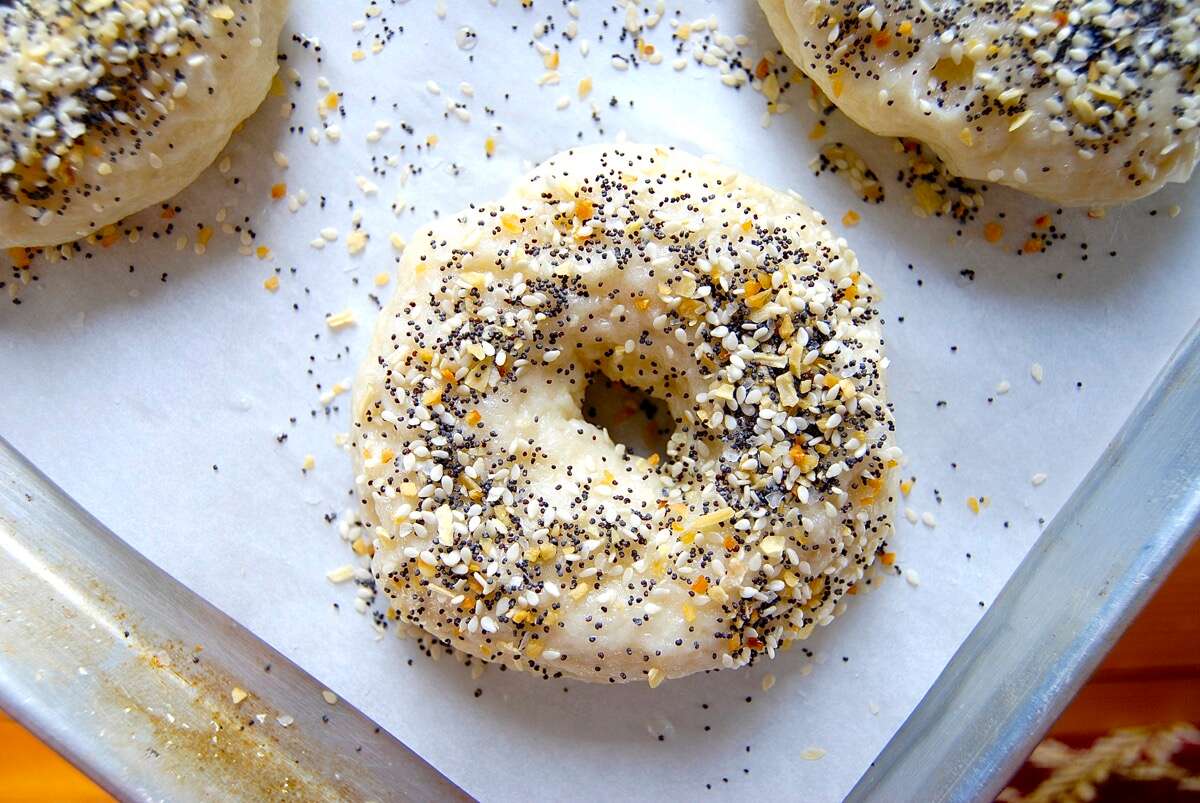 Once you've simmered your bagels and returned them to the baking sheet, brush them with an egg white mixed with 1 tablespoon water; then sprinkle heavily with the everything topping. 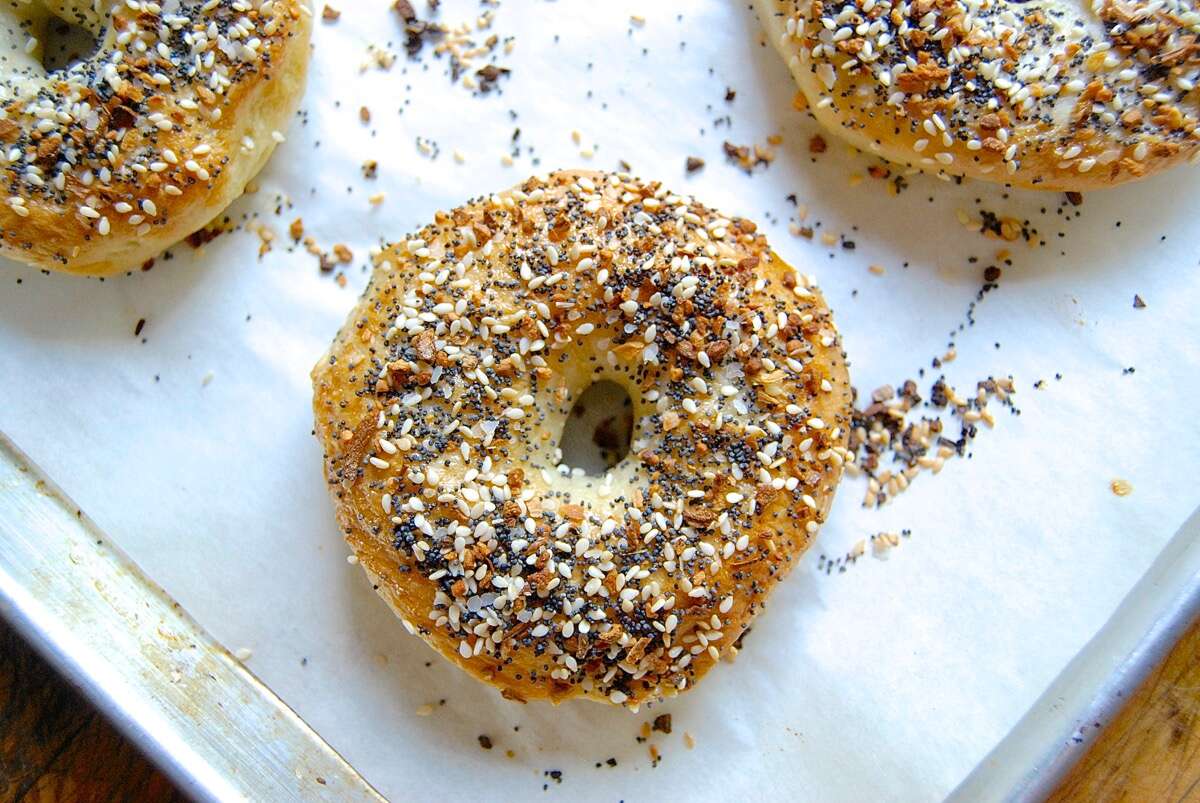 Notice another benefit of boiling: it sets the bagel's structure, so the hole doesn't fill in as the bagels bake. 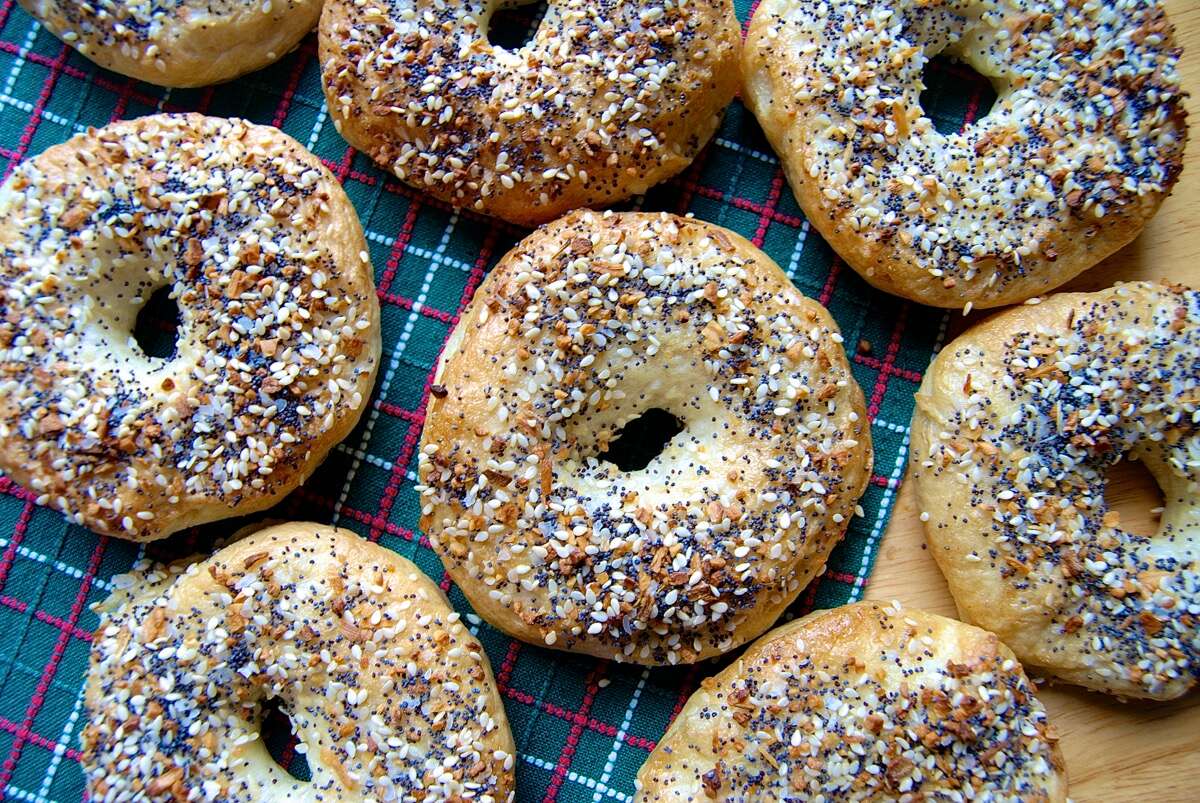 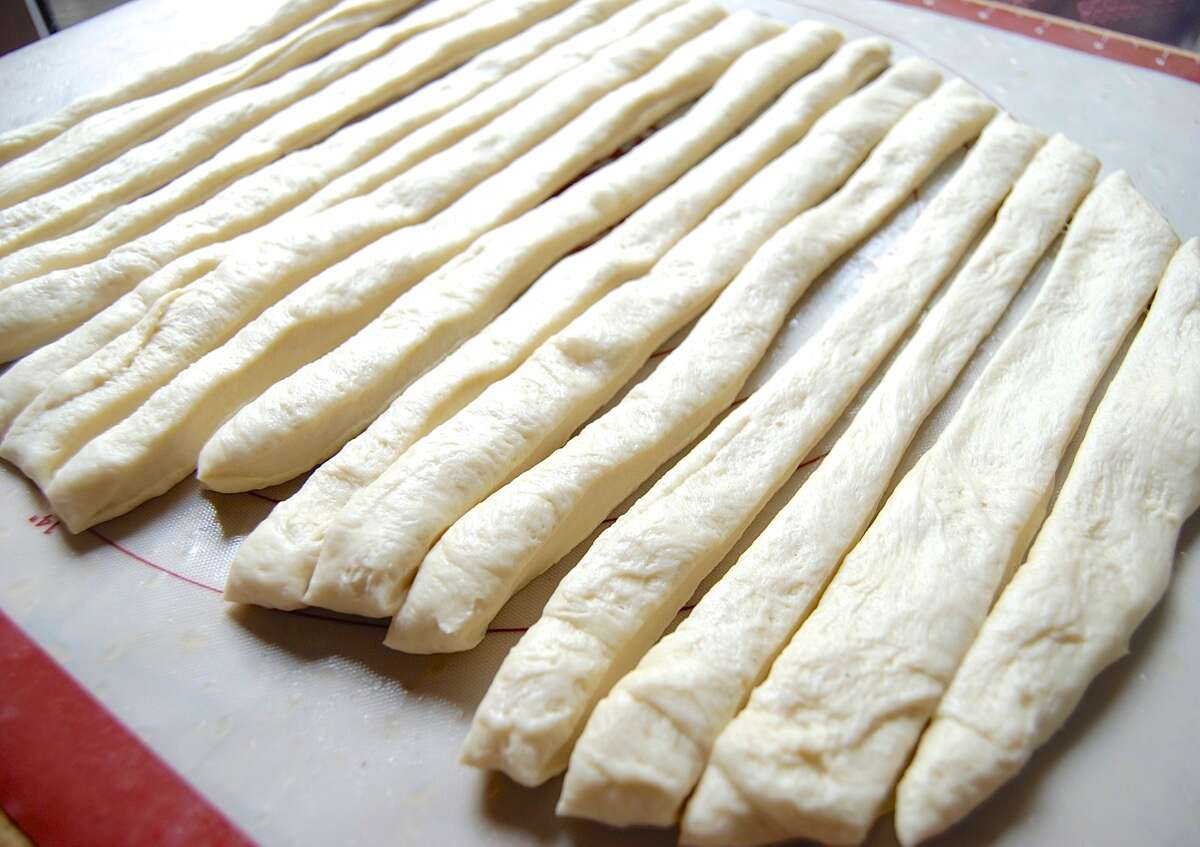 How do you shape garlic knots?

You can divide the dough into pieces and roll each piece into a rope.

Or you can do what I've done here: pat/roll the dough into a rectangle and cut it into however many knots you're planning to make. I've cut this batch of dough into 16 pieces.

Round each "rope" under your hands, and tie into a knot, tucking the ends into the center.

For a great visual of this, check out our video: how to shape knots. 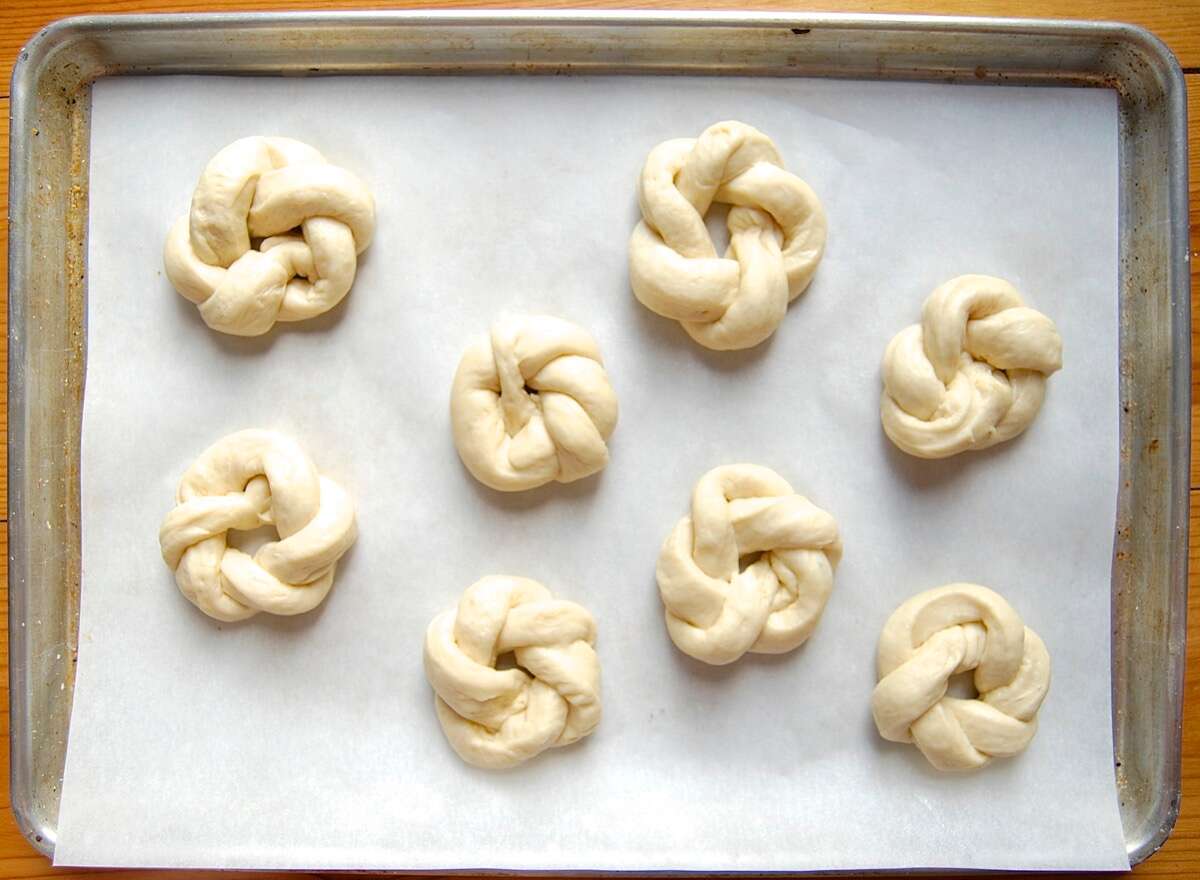 OK, so I'm not the best knot-tier! But remember, beauty is only crust deep.

Let the garlic knots rise – but not for too long.

Let the knots rise for about 30 minutes or so; you don't want them to become really puffy, as the more they rise and the puffier they get, the closer they come to untying themselves once they hit the oven. 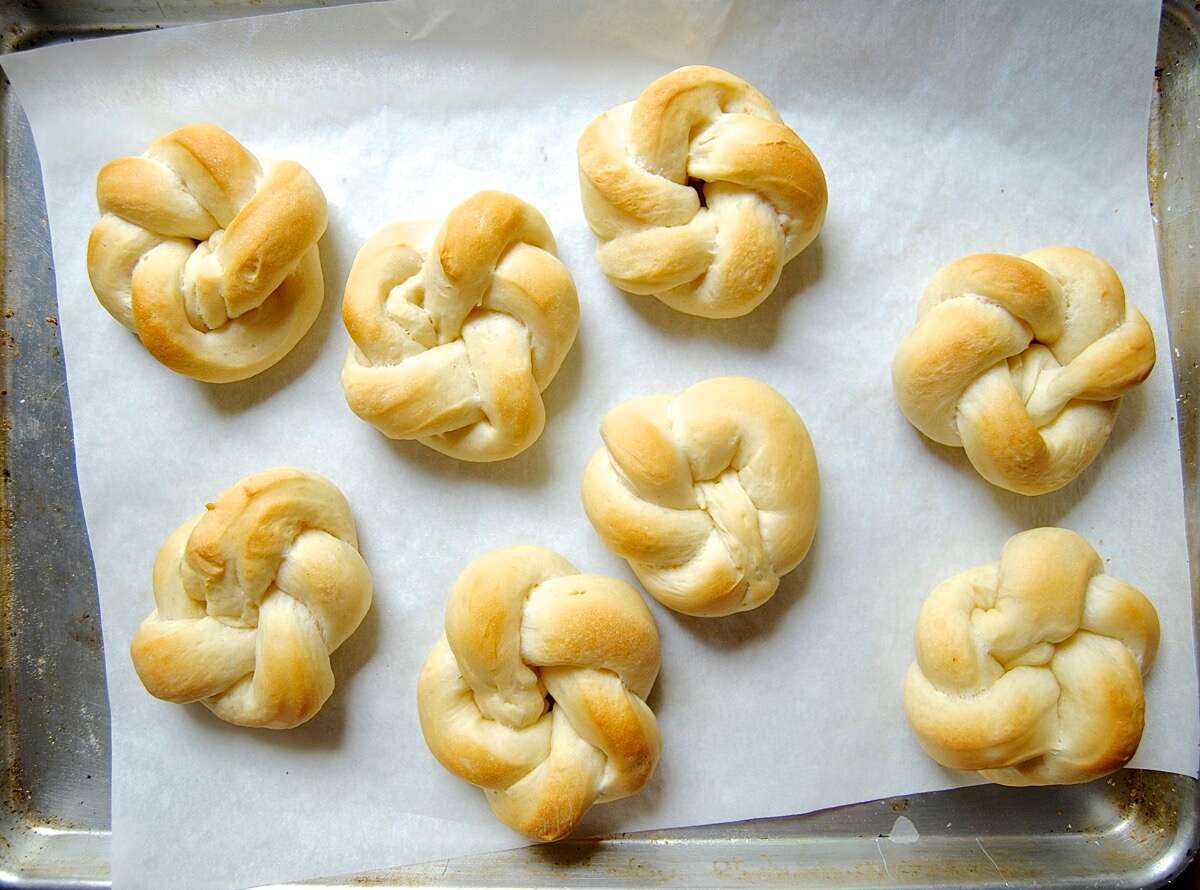 Bake the garlic knots – but not for too long.

Bake the knots in a 350°F oven for about 15 minutes. I like to let them remain light-colored, rather than becoming dark golden brown. That's because, rather than making knots with leftover pizza dough, I use a softer, dinner-roll type dough, one with milk and oil and potato. 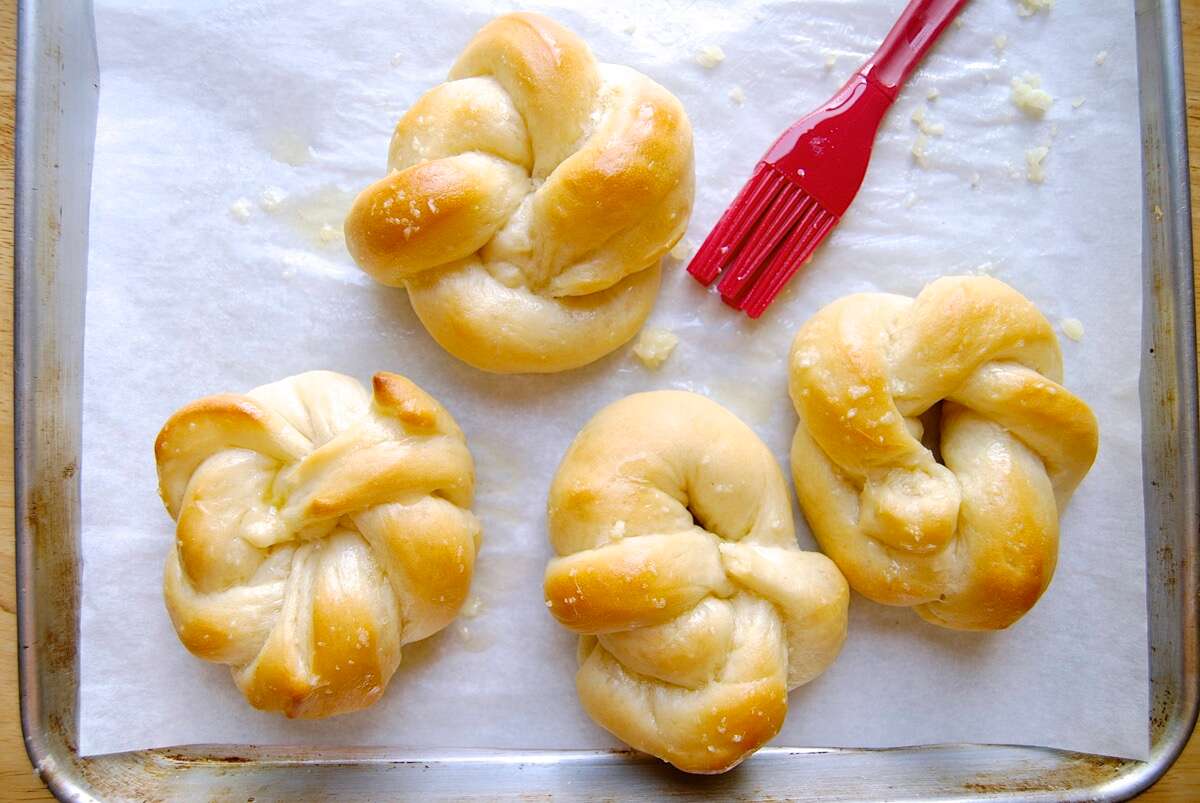 Drench the knots with melted butter and/or olive oil mixed with copious amounts of crushed garlic.

Some people like to sprinkle herbs or grated cheese on top. Being a passionate lover of "the stinking rose," I prefer this unadulterated version. Do you have any favorite memories from the 1980s? If so, please share them in comments, below; maybe that decade's not as forgettable as I think. And if you can't remember a blessed thing about the ’80s – I totally understand; I'm with you!

The 1980s... graduated from uni, couldn't find a job - back to my Mom's. STAR TREK conventions (the ones that were dirt cheap and you didn't have to pay extra for personalized autographs). Dress For Success, Supermoms, power suits, Dynasty (Joan Collins's wardrobe...). Planning your child's path through grad school a year before you tried to conceive, because you and hubby BOTH had to take prenatal vitamins and get down to "fighting weight" (or you'd be "abusing" the baby), and the waiting lists for the "right" nursery and pre-K were five years long... Realizing that in order to have enough money to retire, I'd have to be saving more money a year than I'd be making if I'd actually FOUND an engineering job...
Can't wait to try these recipes. I have never baked bagels or garlic knots. Well, time for a new adventure. As for the 80s, I was out of college, 1st job, got married, started cooking. My husband and I both had long hair (his is disappearing now) and I still experiment with recipes. I have a habit of using a recipe as a sort of guideline, but with baking I have discovered following the recipe is pretty important (unless you don't want everything to look like an earthquake). My most disappointing and most remembered pizza EVER....was when I tried to make venison pizza. Awful doesn't even get close! Enjoy your lessons on baking and am loving the King Arthur products. Thanks.
Just wanted to say that I am really enjoying this series. Great idea!
Funny enough, my friend and I will wish for some 80's things to return(kinda and maybe after a glass of wine or two, wink, wink): fuller hair, but not " the mullet"; jewel tones but not leg warmers (well, may need to rethink that one. Not for a fashion statement but for warmth!! Arthritis is now present!) shoulders pads but not the ones that make you look like a Giant's running back... I met and married my husband in the 80's and my beloved niece was born in the 80's.....Have to say, I remember the decade fondly. Too each his own. Will soooooooooo have to make the everything bagel for my husband. One of his favorites. Along with the garlic knots. LOVE them.
I still love big hair! I also love big bagels and miss those crusty, chewy NY creations. I remember when I lived in NY going out after 11 pm on Saturday night to pick up my Sunday NY Times and hot fresh bagels around the corner.
Sometimes bigger is better, and that is most definitely true with bagels and hair! :) Happy big baking down the decades to you, Lorraine! Kye@KAF
I am inspired !! I want to make the soft garlic knots.
Both my children were born in the early '80s, so my memories of that decade nearly all revolve around children's music (on cassette tapes) and Sesame Street, with occasional visits from a babysitter so mommy and daddy could see the latest "Raiders of the Lost Ark" and "Star Wars" movies, and ending the decade with a big move from East to West Coast. Honestly, every time I see pictures of your bagels, I drool and promise myself to give them a try once the weather cools.... :-)
The weather has already begun to turn here in VT, so it's almost time follow through with your promise and try your hand at bagel-making! It is incredibly rewarding and you won't want another store-bought bagel again. We hope you give it a go! Kye@KAF

Things bakers know: You should be washing your hands with flour

Avoid sticky hands, a clogged drain, and endless scrubbing with this tip.