Battle of the biscuits

Simple vs. traditional. And the winner is...

Not Jeffrey Hamelman great; but pretty darned good. James Beard hooked me with Beard on Bread about 35 years ago, and I've been practicing regularly ever since.

So you'd think, having mastered yeast bread, baking something as simple as a biscuit would be – well, a piece of cake for me.

Tough biscuits, tasteless biscuits, biscuits whose acrid baking soda flavor made my mouth pucker. Biscuits that never browned (how is that even possible?) Biscuits that flattened into nubbly puddles. I mean, if anything can go wrong with a biscuit – I've been there.

Those unhappy days are gone, though – since I discovered Never-Fail Biscuits. 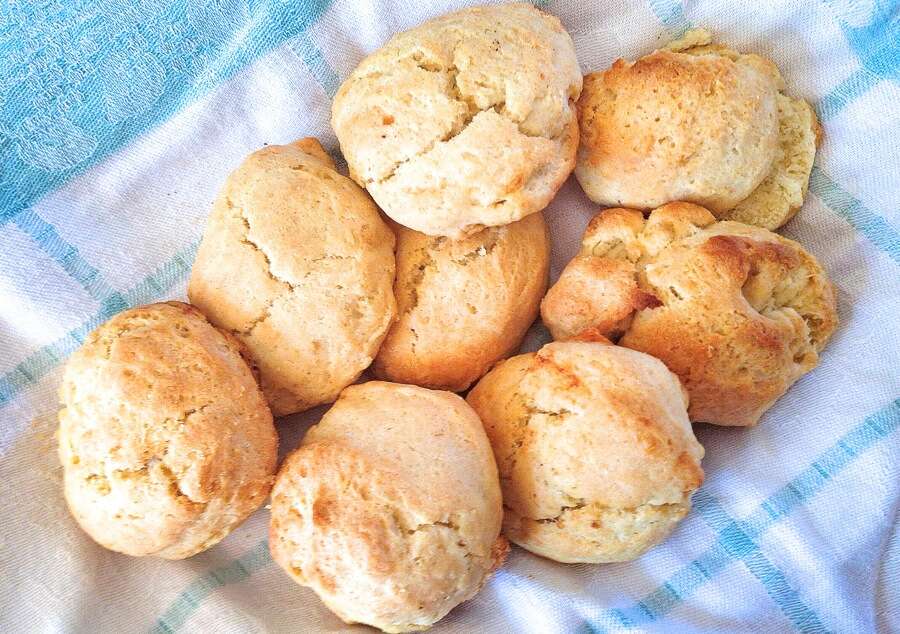 I mean, it's impossible to mess up a recipe with two ingredients, right?

Still, a little voice in the back of my brain kept nagging, "Those can't possibly be as good as REAL biscuits. You know, the kind where you work the butter into the flour, add milk, roll out the dough, cut it with a cutter... the kind REAL bakers make."

So I decided to put my new best friend, Never-Fail Biscuits, to the test: Let's see how they stack up against our Bakewell Cream Biscuits, a classic work-in-the-butter, roll-the-dough recipe. 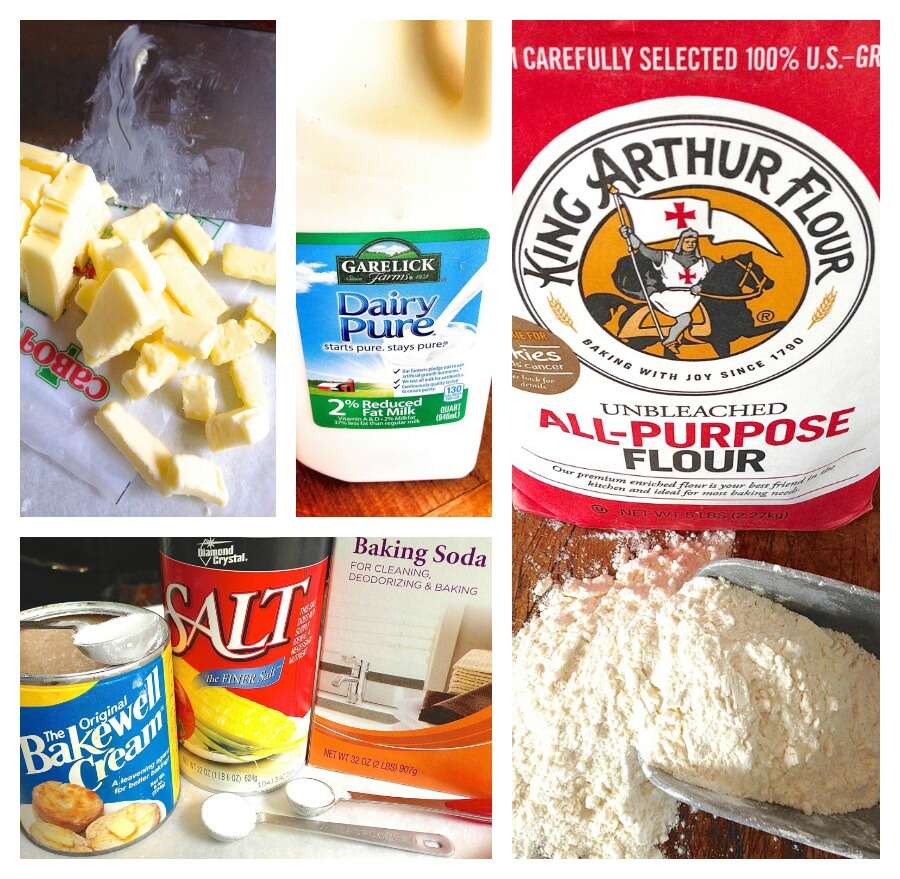 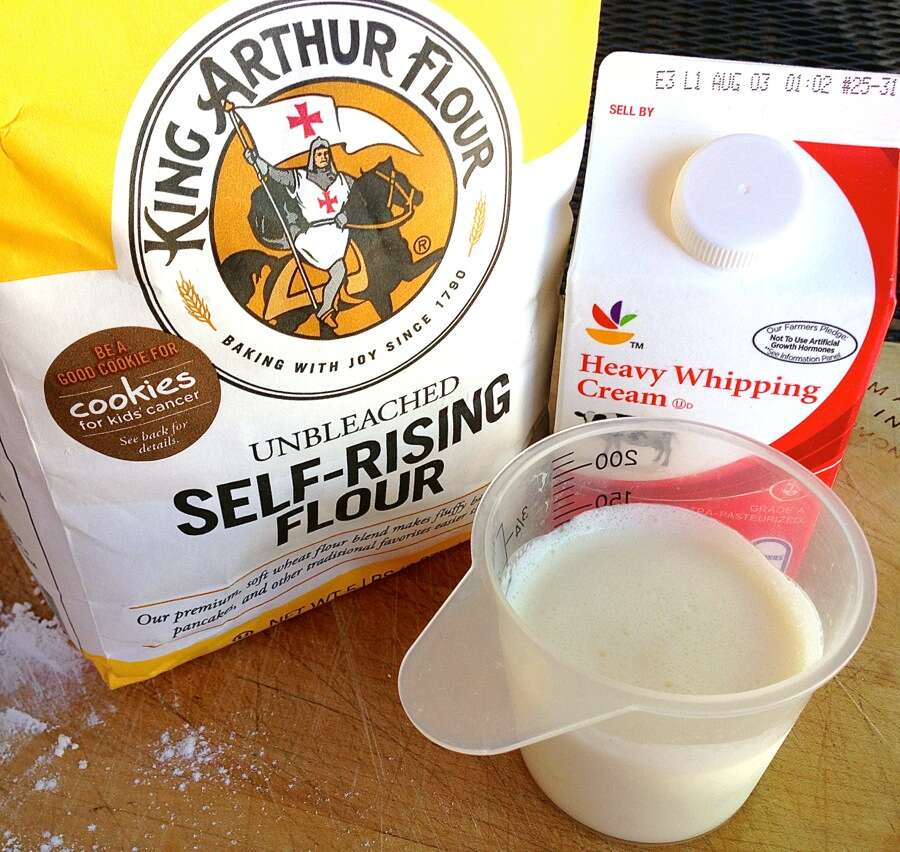 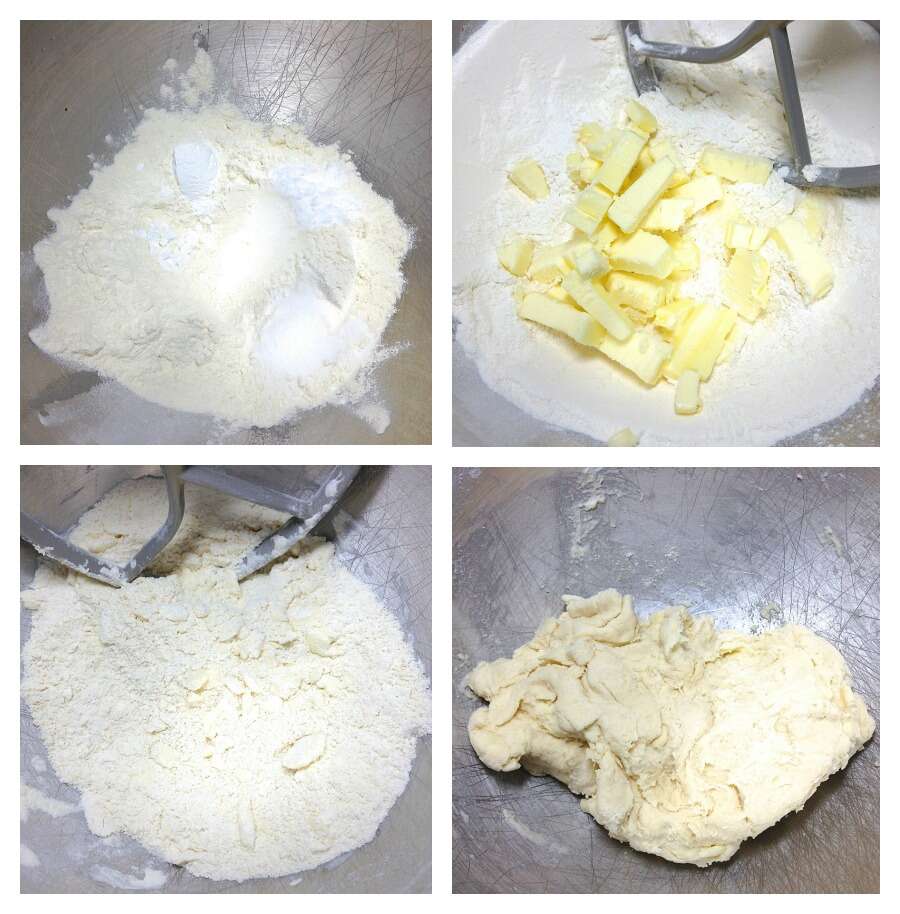 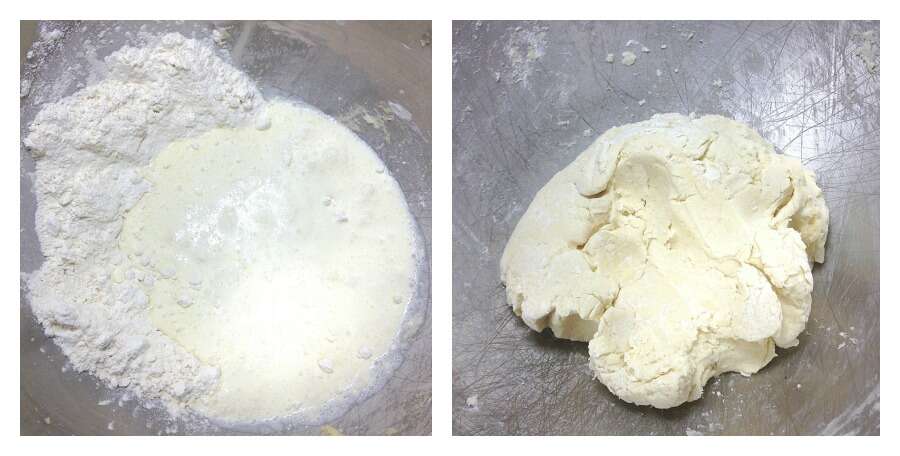 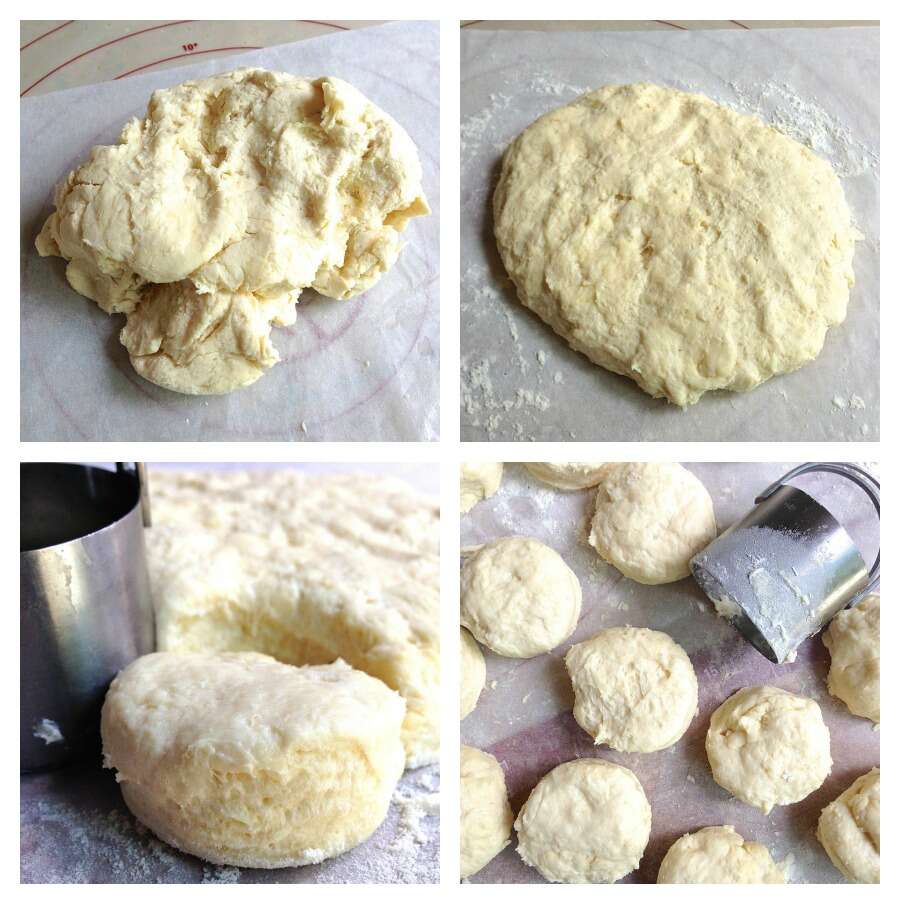 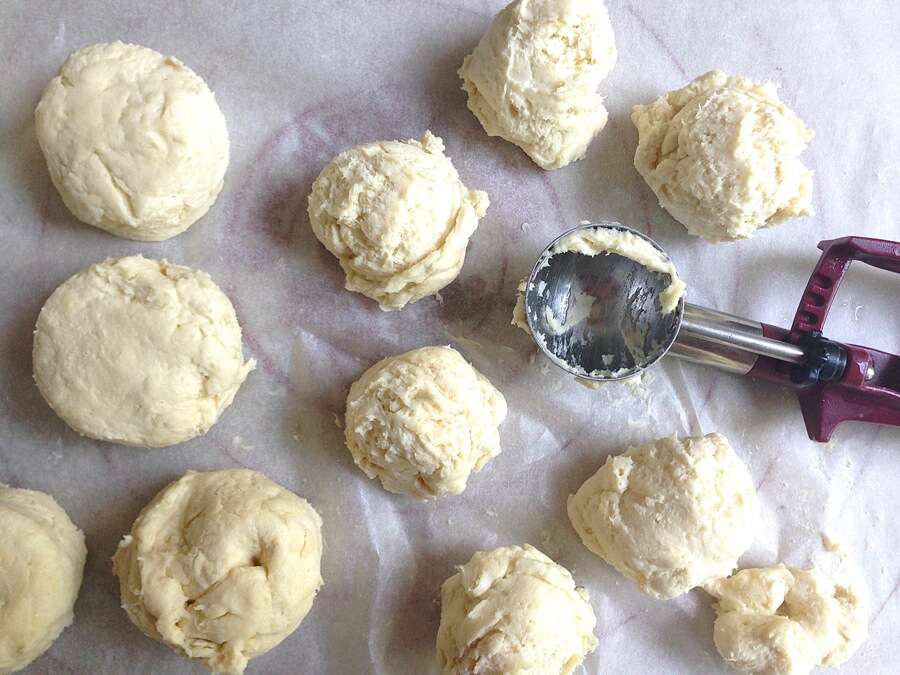 Wait just a minute; the judges are conferring...

Patting/rolling/cutting the Never-Fail biscuit dough results in a more traditionally shaped (flatter-topped) biscuit. If you go this route, we'll call Round 3 a draw. 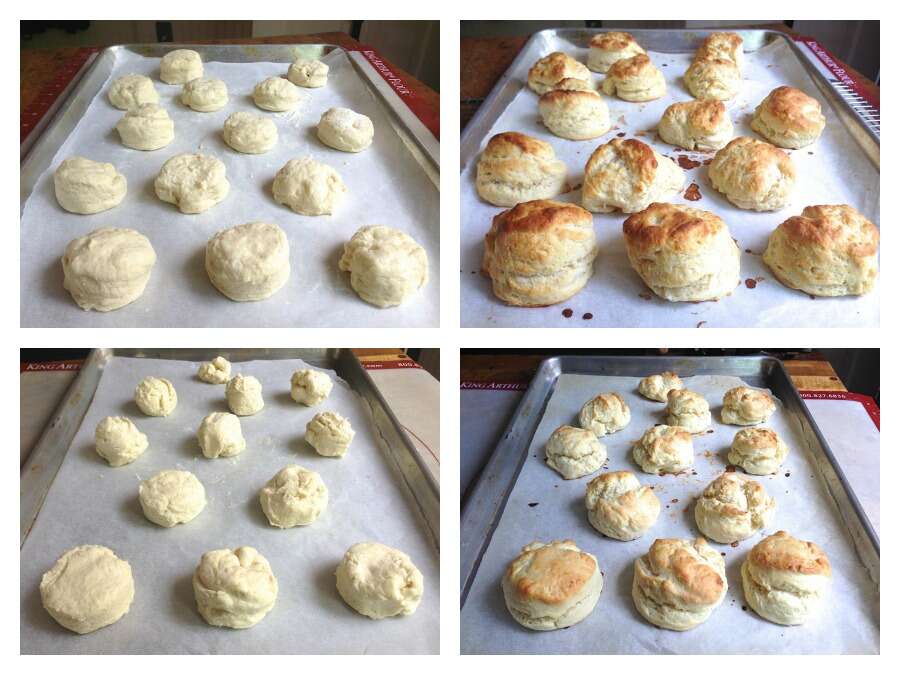 Bakewell Cream Biscuits (top) bake in a 475°F oven for 5 minutes, then rest in the turned-off oven for an additional 5 to 10 minutes. 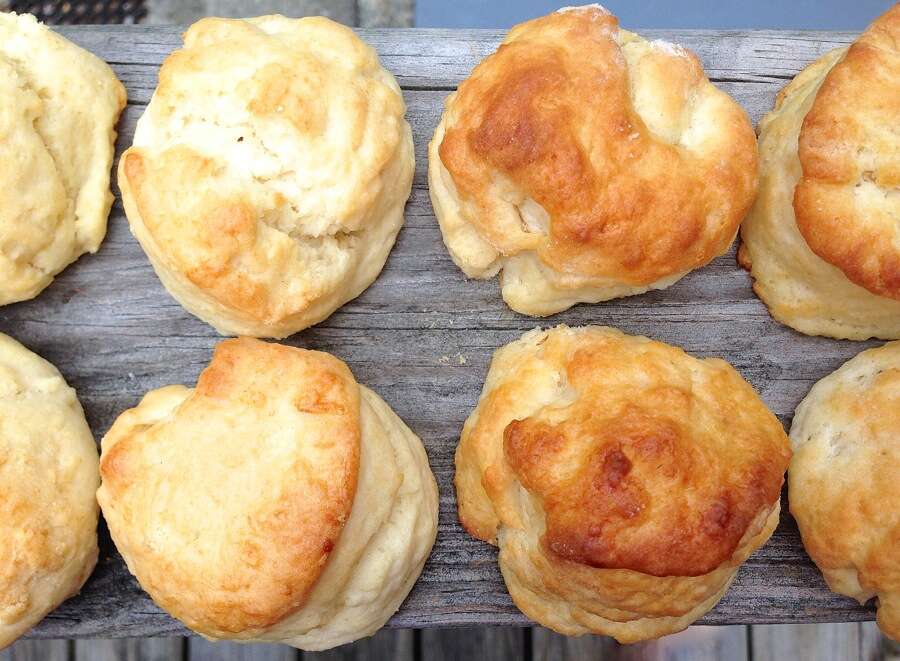 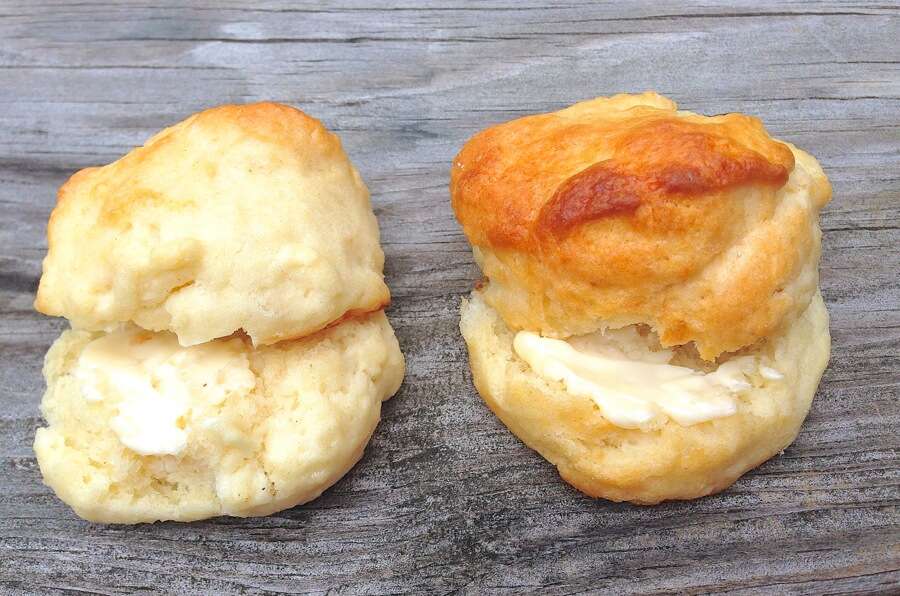 Both biscuits were equally delightful hot out of the oven: crisp outside, steamy/soft inside. As they cooled, Never-Fail Biscuits retained their soft texture; while Bakewell Cream Biscuits firmed up a bit. Neither held onto their crisp crust.

By the following day both biscuits had hardened just slightly, with Bakewell Cream Biscuits becoming harder than Never-Fail Biscuits, though both were still perfectly acceptable served at room temperature. And rewarming them in the oven brought both of them close to their fresh-baked texture.

Hold on, the judge is calling a timeout –

Look closely at the two biscuits above. See the single horizontal fault line in the Never-Fail Biscuits, and the multiple horizontal lines in the Bakewell Cream Biscuits? This difference provides a vital clue to the winner of our final round. 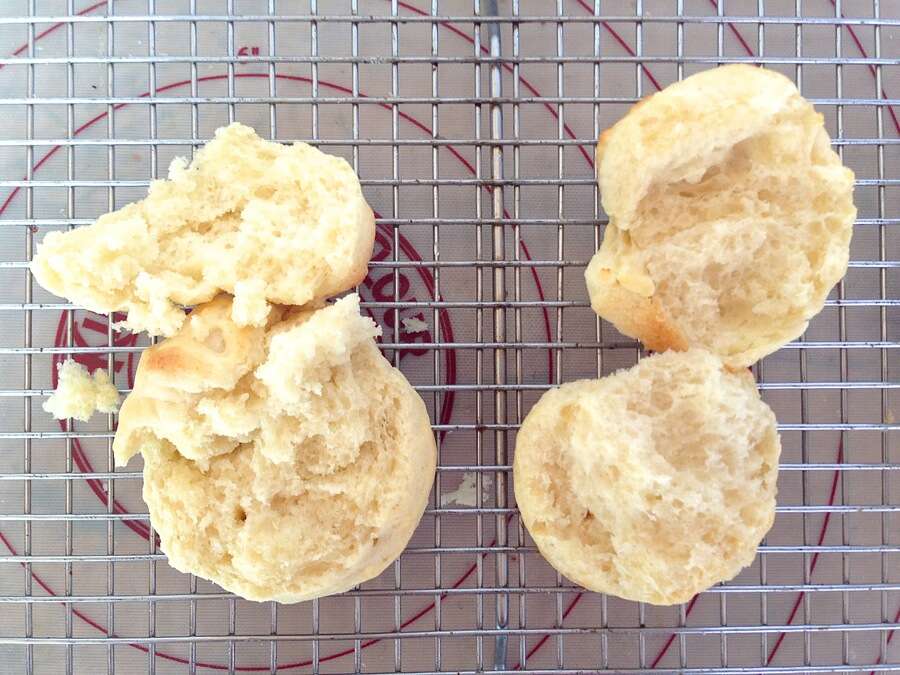 Making shortcake? Ah, here's the biggest difference between these two biscuits. Never-Fail Biscuits (left) crumble when you try to split them in half for shortcake. Bakewell Cream Biscuits (right) split easily along their "layer line."

Biscuits, join the referee (that would be me) in the center of the ring – er, kitchen. The judges are tallying up the score. And the winner is:

Never-Fail Biscuits – by a crumb!

But only if you scoop them. If you like cutting your biscuits with a cutter, then it's a perfect draw: 2 rounds to Never-Fail Biscuits, 2 rounds to Bakewell Cream Biscuits, and 5 rounds ending in a draw.

Recap: If you're into ease of preparation and simplicity of ingredients, Never-Fail Biscuits are your choice.

If you enjoy whisking together ingredients, working butter into flour, adding milk, stirring GENTLY, rolling or patting dough into a round, and using your biscuit cutter – in other words, if you're comfortable with the classic biscuit process – then go ahead and stick with your favorite traditional biscuit recipe, like our Bakewell Cream Biscuits. 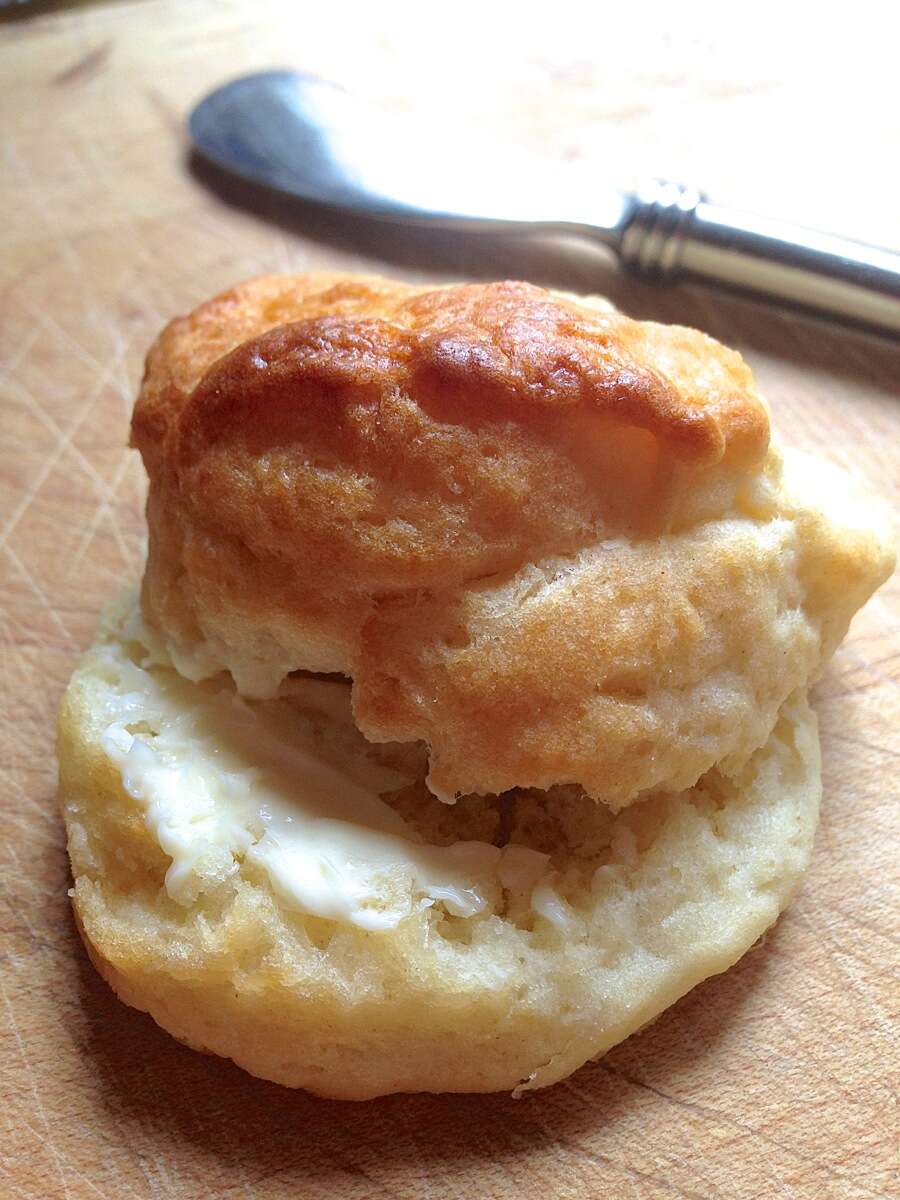 Most of all the lucky recipients of your tender, tasty biscuits!

Want to wage your own Battle of the Biscuits? Pit our Never-Fail Biscuits against your own favorite recipe. And may the best biscuit win!

I made my first batch of biscuits today using Bakewell Cream and following the recipe on the can. They were light, fluffy, and delicious. My husband loves a good biscuit, but he usually discards the "guts" because he finds them to be to doughy for his liking. Today he ate all of it! Thanks for offering such a good product. Will be making them again!
I have some left over heavy whipping cream that has soured. I might use it. Any comments?
My comment is that cream that's gone sour because it's been in the fridge too long smells and tastes different than sour cream prepared commercially. If it was me, I'd discard it. PJH
just wondering. If a pinch of cream of tartar was added to the never fail biscuits, or a pinch extra of baking soda or baking powder. And, to give biscuit support bake next to each other, or in muffin pan.
Self rising flour, cream and salt are the only ingredients in the never fail biscuits. Your tips would make for another interesting blog comparing cream of tartar, additional baking powder or the results of various biscuit baking supports. Enjoy the baking journey! Irene@KAF
I was really interested in your battle of the biscuits, as I have tried so many recipes over the years searching for the perfect combination of flavor and texture. I tried your winning recipe this morning, with an open mind, but found it just doesn't compare with the recipe I found back in 2008 in USA Weekend. It's possible I didn't execute the winning recipe perfectly, but I really think the USA Weekend recipe is superior. Crispy, buttery exterior, and moist flavorful interior. After breakfast this morning my husband asked me not to make the new recipe again. He's a little spoiled by the old one. Here's the link. http://www.usaweekend.com/article/20080217/FOOD04/302170002/Tender-biscuits-around-clock Grating the butter sounds fussy, but actually is quicker I think than using a pastry cutter. I found if you work quickly and the weather isn't really hot, cold butter just out of the fridge works just as well. I also prefer to just pat out the dough on a lightly floured surface and use a biscuit cutter. I think their cooking time might be a little long too, so check them at 16 - 18 minutes. I've never tried the variations - didn't want to mess with perfection. They freeze well - might actually be better. I just make up a recipe or double it sometimes, bake what we want, place the rest on a wax paper covered cookie sheet and freeze. When frozen solid place in freezer bags or vacuum seal bags for homemade biscuits any day of the week.
Thatks for the info on salt-vs.-low salt/no salt in biscuits. Now, is there any way to make my own "Self-Rising Flour" mix at home and just forgo the whole salt thing? I realize that will cut down on the sales of your own SRF, but I don't think the loss of a bag or two every few months will break KAF;}) Seriously, (if at all) your recipe for cream and SRF is just about the fastest thing around when I get a real Jones for "Bikkies", as my wife calls them when scarfing them down! Good Baking to all at KAF!
David, mix 1 1/2 teaspoons baking powder into 1 cup all-purpose flour, and you'll have a salt-less (except for the sodium in the baking powder) self-rising flour approximation - enjoy! PJH
Could you use the self rising flour and cream/yogurt/sour cream to make scones?
If you wish to make sweeter biscuits that lean toward scones, you might try adding 3 Tablespoons of sugar to the Never-Fail Biscuit recipe, and then stirring in your choice of berries or fruit.~Jaydl@KAF