Happy Rosh Hashanah! Have you made your challah yet?

Challah is typically made as a long, braided loaf, its crust a shiny golden brown from a glaze of beaten egg applied before baking.

But Rosh Hashanah challah, which celebrates the Jewish new year, often appears in a spiral — signifying the circle of life.

This particular challah is studded with fresh apple and raisins, and rolled in an aromatic coating of cinnamon-sugar — autumn flavors to complement the September Rosh Hashanah holiday. 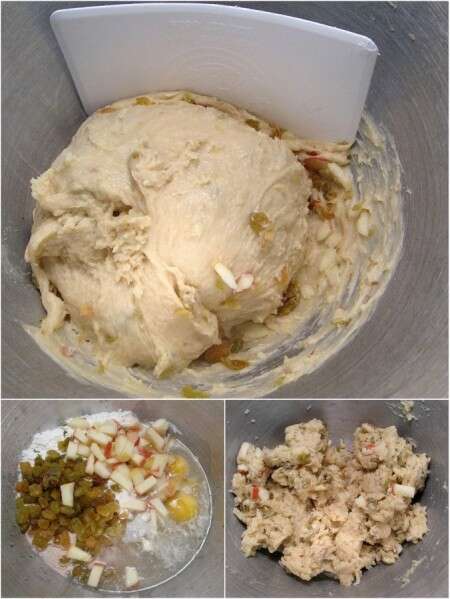 *If you use regular (SAF Red) instant yeast, you'll see an increase in your rising times.

Combine all of the dough ingredients and mix and knead them, by hand, mixer, or bread machine, until you have a soft, smooth dough (as pictured at top, above). 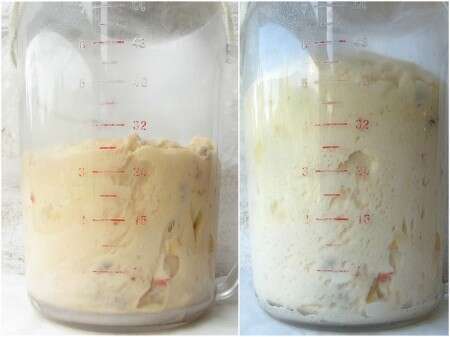 Allow the dough to rise, covered, for about 1 to 2 hours (or more, if you don't use SAF Gold yeast), or until it's puffy, though not necessarily doubled in bulk. An 8-cup measure is a handy tool for tracking the dough's rise.

Gently deflate the dough, and transfer it to a lightly greased work surface. 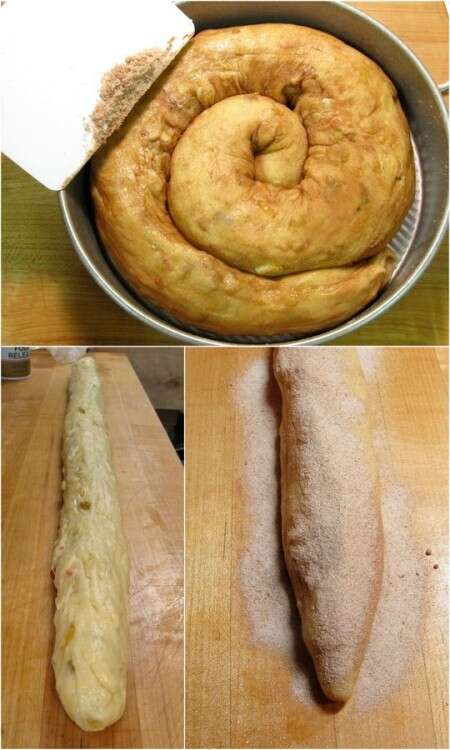 Pat and roll the dough into a 36" rope, tapering one end. Poke any raisins or apple bits sticking out of the dough back underneath the dough's surface; this will help prevent them from burning in the oven.

Sprinkle the dough with cinnamon-sugar, rolling it around to coat as completely as possible.

Starting with the tapered end, coil the rope loosely into a lightly greased 9" round cake pan, starting at the center and working outwards. Scrape any extra cinnamon-sugar off the counter, and sprinkle it atop the coiled dough. 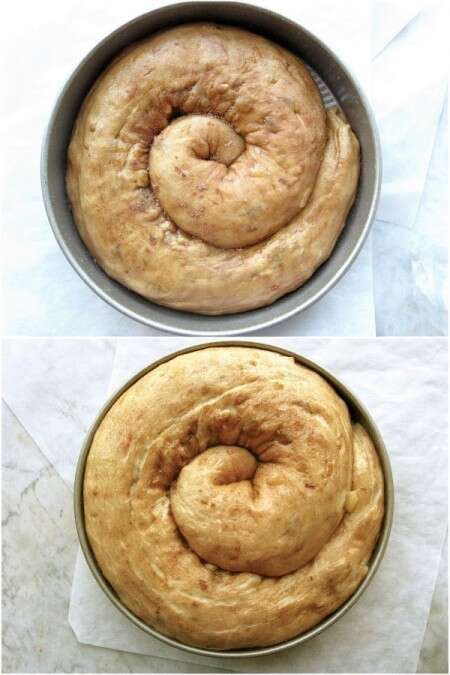 Cover the loaf with lightly greased plastic wrap (or place it in a proof box), and let it rise until it's very puffy, 60 to 90 minutes.

Towards the end of the rising time, preheat the oven to 375°F.

Whisk together 1 large egg white and 1 tablespoon water, and brush this glaze over the risen loaf. 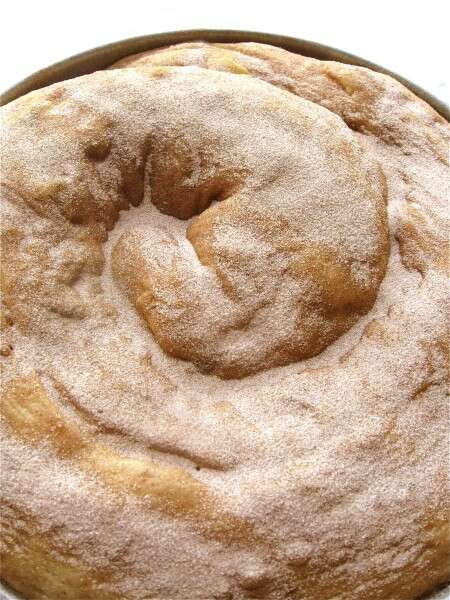 Sprinkle with additional cinnamon-sugar, if desired. 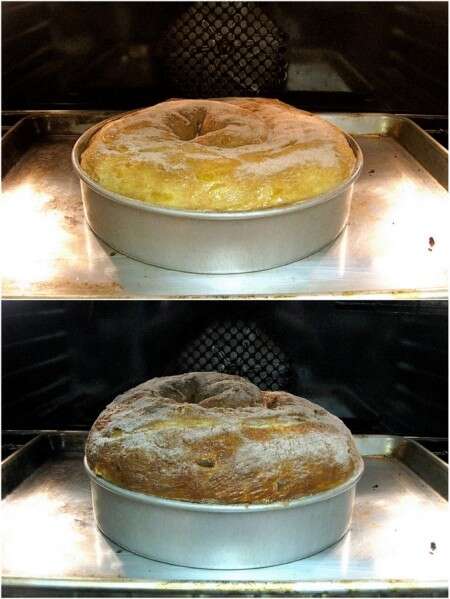 Place the cake pan atop a baking sheet; this will insulate the bread's bottom crust, and keep it from browning too much.

Put the challah in the lower third of the oven, and bake it for 20 minutes.

Tent the challah loosely with aluminum foil, and bake for an additional 18 to 22 minutes, until the loaf is golden brown. 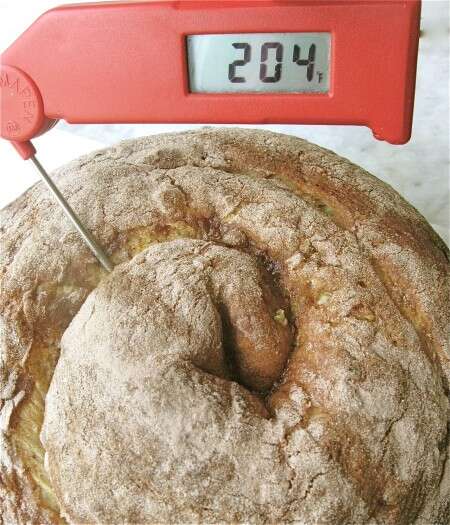 An instant-read thermometer inserted into the center will register 200°F or above. 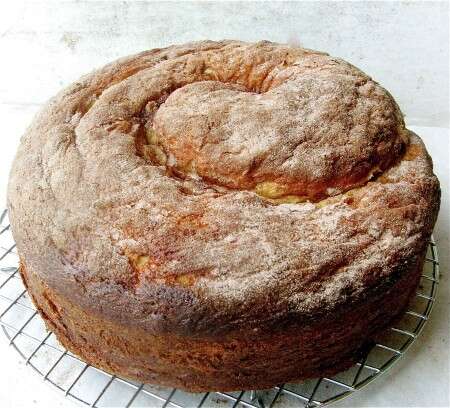 Remove the bread from the oven, carefully turn it out of the pan, and place it on a rack to cool. 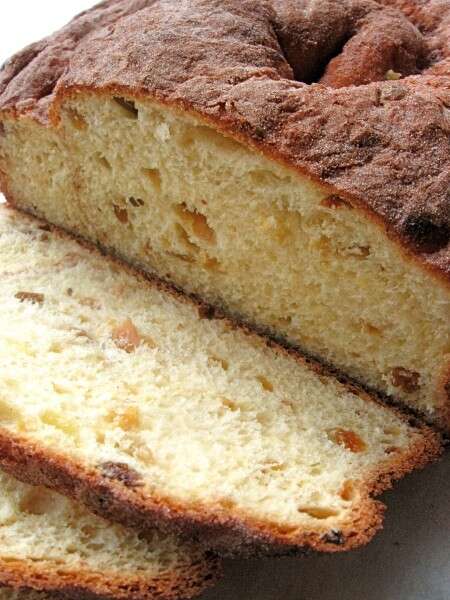 For best results, wait until the bread is completely cool before slicing.

Oh, and if there are any leftovers, consider apple-cinnamon raisin French toast; nothing could be finer.

You guys are so good at making high-level baking accessible!!! Thanks so much. Here is my question: do you recommend plumping the raisons first, and if so with what (water, egg, tequila, Mogen David?) Thanks in advance for your help!!!

Hi Jeff! While you definitely don't need to plump the raisins first, we sometimes like doing it to make them softer, or to add additional flavor. A simple water bath (just until they're covered), or any choice of juice or liquor works great too. We wouldn't recommend an egg though, that wouldn't work very nice. Thanks so much for reaching out, and happy baking!

I made this challah for the holiday. The taste was good. However, it was very dense and dry. Too heavy.

We're sorry to hear that, Mona! Most often when a bread turns out a bit dry and dense it's because a tad too much flour snuck its way into the mixing bowl — we recommend either using a kitchen scale to weigh your ingredients or using the fluff and sprinkle technique for measuring flour in volume. We hope this helps for future baking adventures!

Made this, very tasty!! Easy too, with breadmaker for dough making.

I make challah bread all the time. Make it for french toast and it's amazing. I made this apple raisin challah and omgoodness... the best thing I have ever tasted. My question is, I have friends in California that I send challah too. Now, I live in Arizona, will this ship well, will it spoil because of the fruit inside?
Challah French toast is simply the best, Katherine! We'd be wary of sending challah across the country, but if you've had good results doing this in the past, you're welcome to try it again. You might consider freezing the loaf and sending it frozen. It'll thaw as it makes its journey across the country, but at least this way it'll be cool for part of the time it's in transit and reduce the likelihood that the fruit and bread will go bad/stale. Good luck! Kye@KAF
How do I make this as wheat challah?
Looking to make a wheat-based challah? You can go ahead and replace half of the all-purpose flour in this recipe with either white or traditional whole wheat flour. It can help to let the dough rest for about 15-20 minutes after mixing the dough initially, once it's become a shaggy mass before kneading. This rest will allow the whole wheat flour to absorb liquid and become fully hydrated. Alternately, you might consider giving this recipe for Millie's Whole Wheat Challah, which is designed to use 2 cups of whole wheat pastry flour. You can't go wrong with either approach. Happy baking! Kye@KAF
Just the recipe I have been looking for. I made French toast with raising challah bread from a bakery years ago and have not be able to find it again. I'll be making this for sure. It would be such a great help for us older cooks who aren't so tech savy if you could include a print button so we could print it out. Thanks again for such a great recipe.