Not all pies are sweet

I mean, think of the King, with his "four and twenty blackbirds, baked in a pie" – surely that savory (to say nothing of copious) filling qualifies the King's pie as quiche.

Pie doesn't have to be sweet. And when it's not, it's often called – you guessed it – quiche.

In fact, many of the first pies on record were savory, not sweet. In ancient Greece, a basic flour/water pastry was used to encase meat, sealing in its juices as it cooked.

So, pie's been known and enjoyed throughout history. And for good reason – who doesn't love a slice of great pie, with its flaky pastry and tasty filling?

Yet, how many of us bake pie as often as we do bread, muffins, or cookies?

It's kind of a production, right? And that's mostly because of the crust. Making filling is usually no more complicated than stirring together ingredients. But oh, that crust...

Raise your hand if you've resorted to store-bought, freezer-case pie crust. I see quite a few hands out there...

Yes, the ease of store-bought crust is enticing. But the flavor?

Meh. Not so good.

I've always said, if you can read, you can bake. And that goes for pie crust as much as yeast bread, cake, biscuits, and anything else that includes a bit of technique.

Secrets for making the perfect pie crust is a faster, simpler lesson.

I'm here to tell you, real men CAN make quiche. As can real women.

Using your fingers, a fork, a pastry blender, or mixer, work in 6 tablespoons (85g) cold unsalted butter (cut in 1/2" cubes). The mixture will be crumbly, but unevenly crumbly; some pieces of butter should remain in bigger chunks.

Toss in 1/4 cup (28g) shredded Parmesan cheese. Then drizzle in 2 to 3 tablespoons cold water, tossing the mixture around and stirring until it becomes cohesive. Note: If you use flour instead of Hi-maize, you'll probably need up to 4 tablespoons water.

Once you can squeeze the dough and it holds together, shape it into a rough disk. Wrap in plastic, and refrigerate for 30 minutes, while you make the filling. 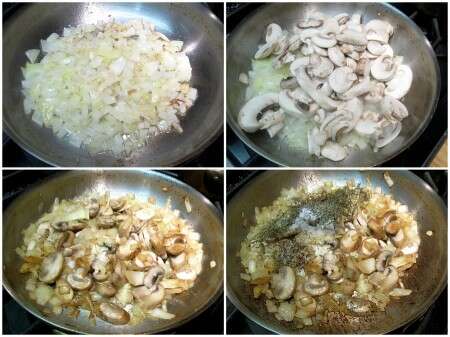 Add 8 ounces white mushrooms, sliced; cook until the mushrooms start to lose their juices, about 10 minutes. 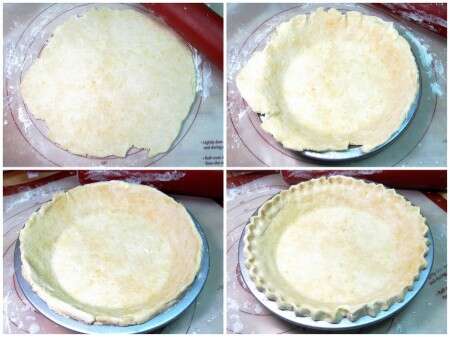 Transfer the dough to a floured surface. If it's been refrigerated longer than 30 minutes, give it 5 to 10 minutes to soften up a bit.

Next, gently settle the crust into a 9" pie pan. Notice my crust wasn't quite 12", so it's a little scanty around the edges of the pan. It pays to roll the crust to the suggested size. DOH.

Squeeze the edges of the crust between your fingers so they're not raggedy, then crimp.

You want to make a tall crimp, rather than simply flattening the edges of the crust with a fork; a taller crust helps contain a liquid filling, which quiches always have. 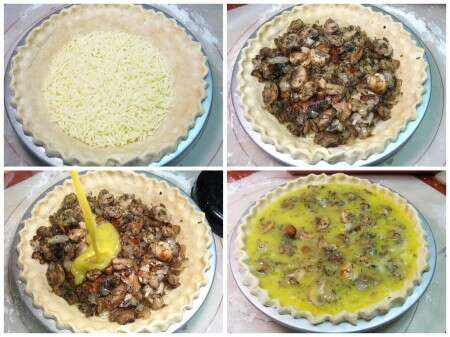 Line the bottom of the crust with 1 cup (113g) shredded sharp cheddar cheese. Spoon the mushroom mixture on top.

Set the pie pan on a parchment-lined baking sheet. If there are any leaks, the parchment/pan will save you some cleanup. Plus, the baking sheet makes it easier to transport the quiche into the oven without spills. 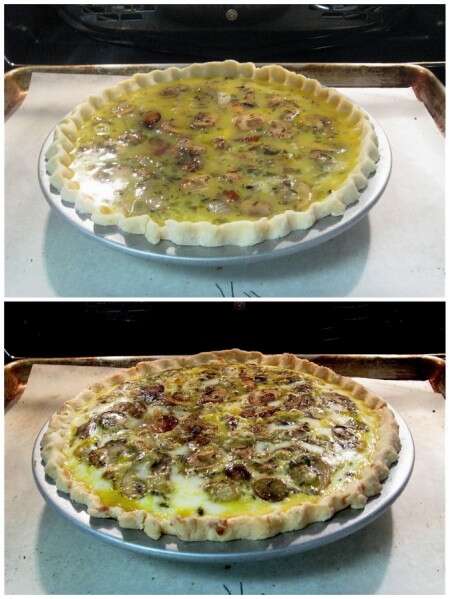 Bake the quiche for 35 to 40 minutes, until the edge of the crust is brown, and the filling appears set. 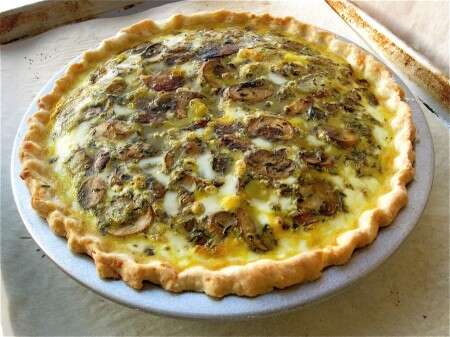 It may not look completely set in the center... 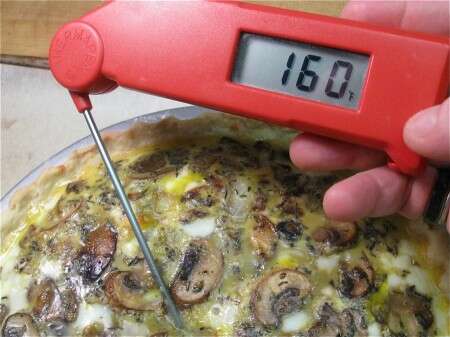 ...but if the center reads at least 160°F on an instant-read thermometer, you're all set. It's all set. We're ALL set. 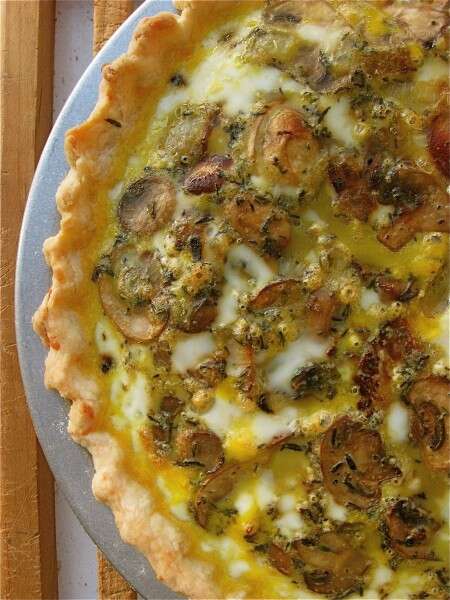 I love how the mushrooms brown on top; little bits of yolk add extra color, too. 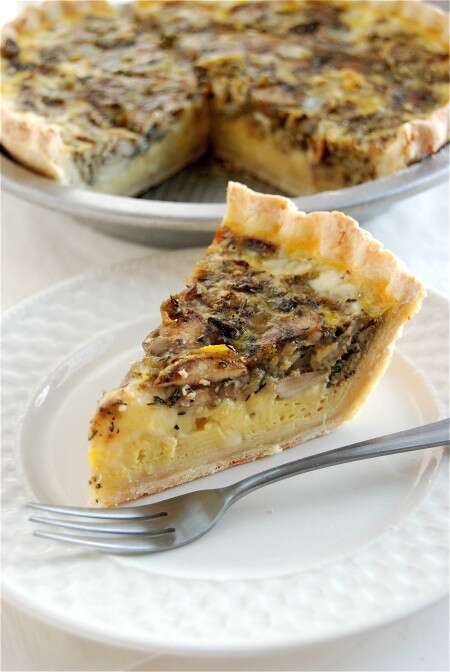 Let the quiche cool for 10 minutes or so, then slice.

For prettier, cleaner slices, let it cool a bit longer.

If you cool the quiche completely, refrigerate, slice, then warm individual pieces very briefly in the microwave, you get this kind of very clean cut. Pretty, huh?

But remember: beauty is only crust deep; it's the taste that counts!

Please read, bake, and review our recipe for Mushroom-Cheddar Quiche.

Wow, it baked perfectly. You know I had to add some Extra veggies. (Broccoli, zucchini, leeks). I also used gruyere just because it is my favorite. I do not think you can ruin this recipe. The crust is easy to work with and the flavors in the crust are much nicer than other crusts I have made.

Any nutritional info. on this quiche?
You’ll be glad to learn that we list the nutrition information for many of our recipes online (including some other quiche recipes, like our Bacon, Egg & Cheese Quiche recipe). When viewing a recipe of ours, scroll down to the Ingredients section. On the right-hand side you’ll see a box titled "At A Glance," at the bottom of which will often be an orange link that will display the nutrition information for the recipe. However, we don't currently have the nutrition information available for this recipe but you might consider using a free nutrition analysis calculators, which are made available online for general, non-medical use. Two such calculators we like are this one from Spark Recipes and this one from Verywell. We hope this helps, and happy baking! Kye@KAF
this is such a yummy quiche I did add eshalots and shallots , just because I love onion flavor, I turned it into 6 single serve quiches and froze 4 of them ,... thankyou for sharing this really enjoyed them...
Can you freeze this quiche for later?
Leslie, quiches freeze beautifully! Simply allow them to cool completely before wrapping in foil and then plastic wrap. Freeze for 1-2 months. To reheat, let it thaw for a few hours at room temperature before putting it in a warm over for 10 minutes at 300 degrees F. Serving it room temperature is also a great option. Happy quiche baking! Kye@KAF

Hi Isaac, you can find the full recipe linked at the top of the article underneath the header or by following this link. We hope this helps to clarify!

I made my first quiche tonight following your directions. It turned out amazing and delicious! The tip about the internal temp helped a lot.