If so, join the crowd. It's amazing how many people are STILL searching for this packaged cookie, denizen of your local supermarket's cookie aisle for decades.

That is, until the Sunshine Biscuit company was acquired by Keebler in 1996 (and Keebler subsequently by Kellogg's). Though Sunshine's Vienna Fingers survived the transition, Golden Raisin Biscuits were unceremoniously dropped.

As were Hydrox – which, despite their reputation as an Oreo knockoff, actually preceded America's Favorite Cookie by four years: Hydrox were introduced in 1908, Oreos not until 1912.

Oreos survive. Hydrox graced the shopping carts of its last fans in 1998, though to this day its proponents claim the Oreo just can't compare to Hydrox in its prime – to say nothing of its lame replacement, “Droxies.”

But I digress; back to Golden Raisin Biscuits. 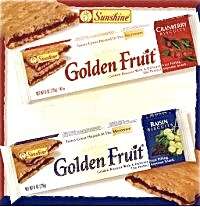 Does this photo jog your memory? The modernized packaging and new flavors were a last-gasp effort to stave off extinction. Along with classic raisin, Sunshine extended the line to cranberry biscuits and apple biscuits, renaming the whole line “Golden Fruit.”

Alas, to no avail. Raisin Biscuits breathed their last in 1996.

Attention, Sunshine Golden Raisin Biscuit fans: these are not an exact match. The original was filled with raisin paste, and was just vaguely sweet, more the very thinnest of raisin pies rather than a classic cookie.

And you can make them that way, if you like. Stew some raisins with a bit of water and a touch of sugar, make your favorite pie crust, spread a thin layer of filling between two equally thin layers of crust, and bake until barely golden and pliable, rather than crisp: that's a classic raisin biscuit.

These Golden Raisin Cookies are a more robust version. Filled with currants (or chopped raisins), topped with crunchy coarse sugar, and baked until crisp, they're more nostalgic evocation than clone.

And a very good reminder of why the online hue and cry over Sunshine Golden Raisin Biscuits has yet to abate, a full 15 years after their untimely demise.

First, lightly grease a couple of baking sheets, or line them with parchment. 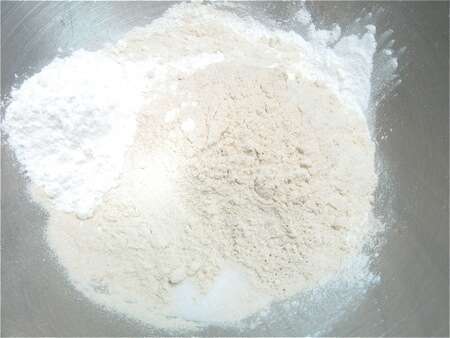 Whisk together the following in a mixing bowl:

*If you use white whole wheat flour, for best flavor substitute 1 tablespoon orange juice for 1 tablespoon of the ice water (when you get to that step, below). 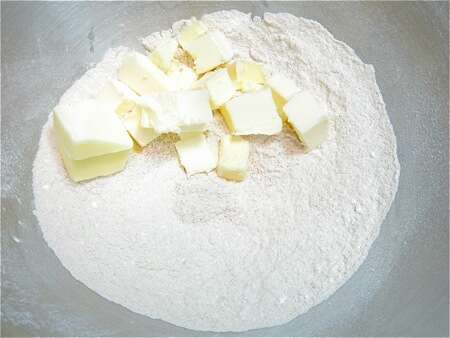 Work the butter into the dry ingredients using your fingers, a mixer, or a fork,  mixing until the dough is unevenly crumbly. 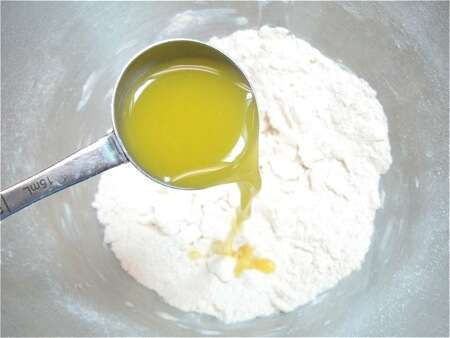 Next, add 3 to 4 tablespoons ice water, enough to make the dough cohesive. Here's where you may choose to substitute 1 tablespoon OJ if you're using whole wheat flour. 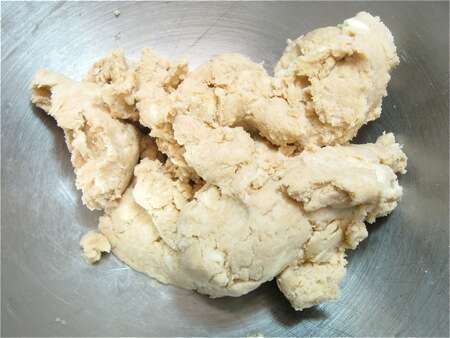 Mix until the dough comes together. 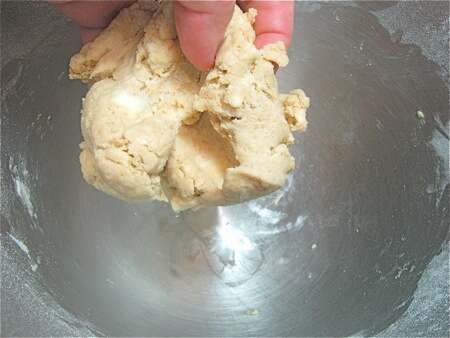 Grab a handful; if it holds together willingly and doesn't seem at all dry or crumbly, you've added enough liquid. You should be able to pick it up easily, without any dry chunks remaining in the bowl. 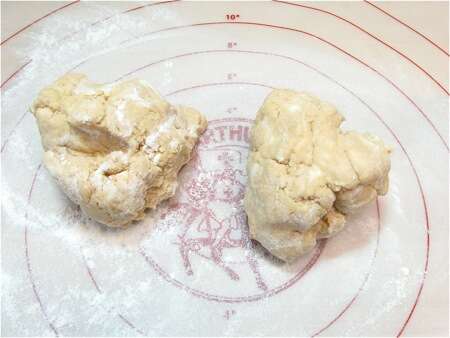 Divide the dough in half, and place on a lightly floured work surface. 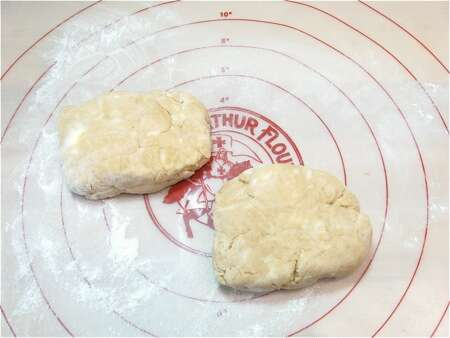 Shape each half into a rough rectangle. 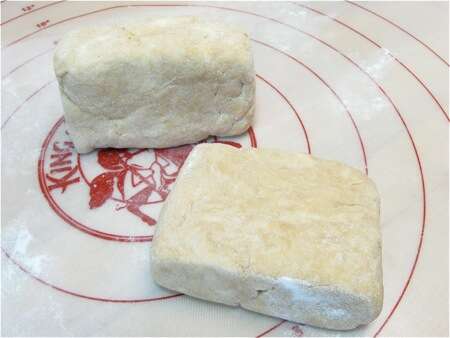 Press each of the four sides against your work surface to smooth any ragged edges.

Wrap the dough, and refrigerate it for 30 minutes. Towards the end of the refrigeration time, preheat the oven to 350°F. 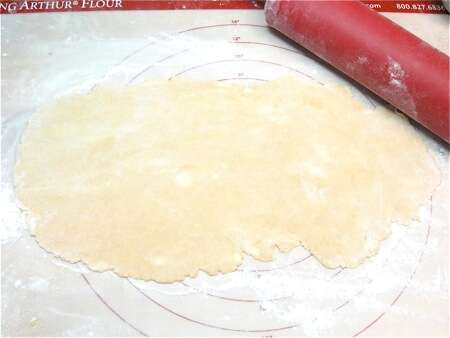 Take one piece of the dough, and place it on a lightly floured work surface. Roll it into a rectangle that's about 10" x 14", about 1/8" thick. Don't worry about ragged edges; life is imperfect.

Crack 1 large egg into a bowl, and whisk to combine the yolk and white. 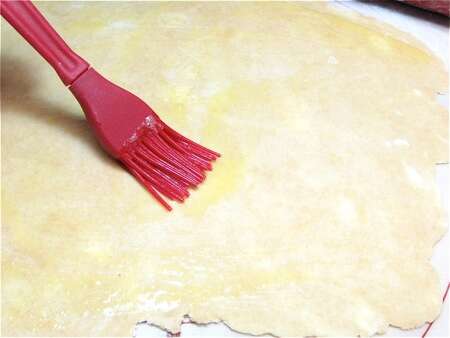 Brush the surface of the dough lightly with some of the beaten egg. 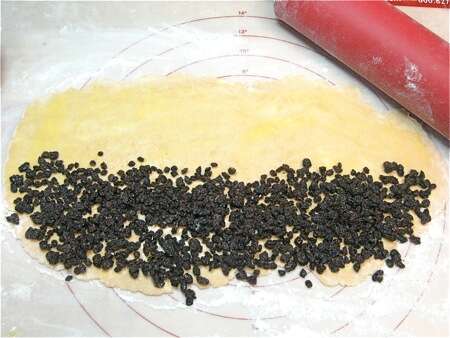 Spread half the surface (one of the "long" halves — a swatch about 5" x 14") with 3/4 cup of currants or chopped raisins, pressing them in gently. 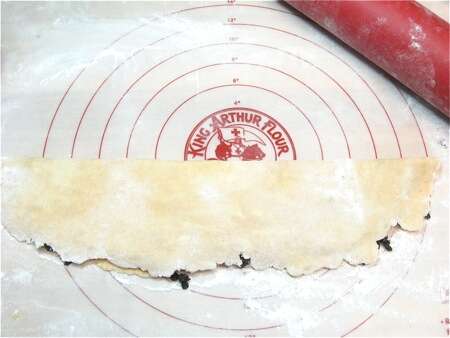 Fold the other half of the dough over the currants... 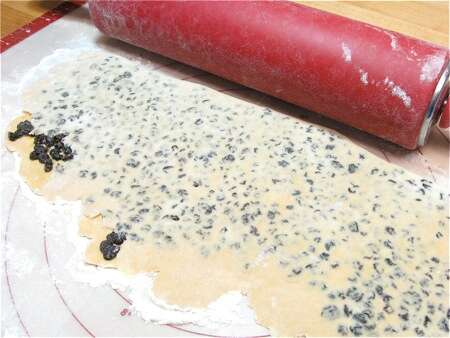 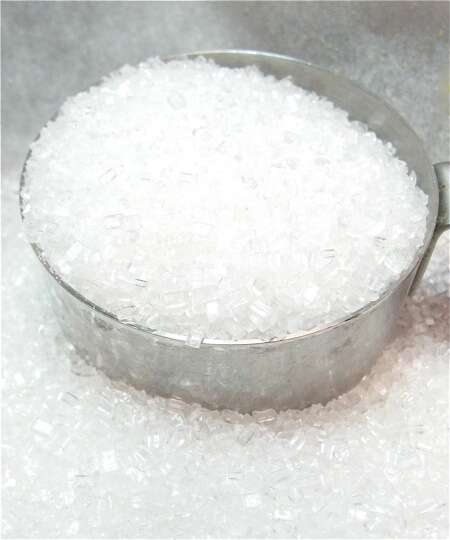 While it's definitely not traditional, I like to sprinkle the tops of these cookies with coarse white sparkling sugar. It adds crunch and sweetness. 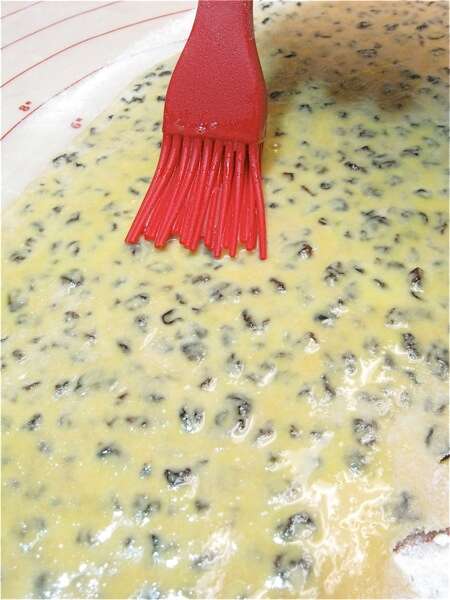 Even if you're not adding the sugar, brush the dough lightly with some of the beaten egg... 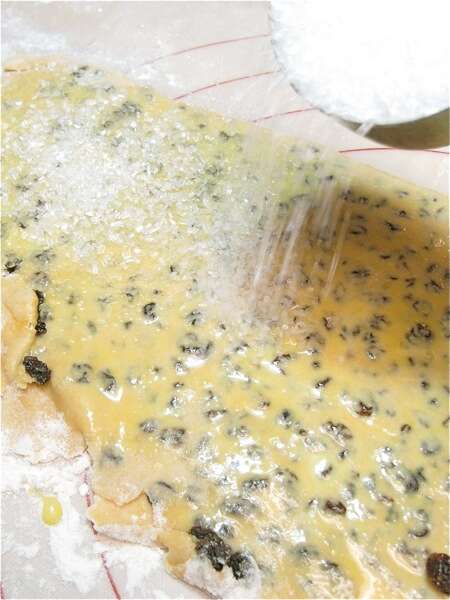 ...then sprinkle with 1/4 cup of coarse sugar, if desired.

If you don't have coarse sugar but still want the added flavor, use a couple of tablespoons of regular granulated sugar. The cookies won't look as nice, but will taste fine.

Now, trim the ragged edges of the rectangle; these will be the "cook's cookies," the ones you spirit away and eat yourself because you don't care what they look like. 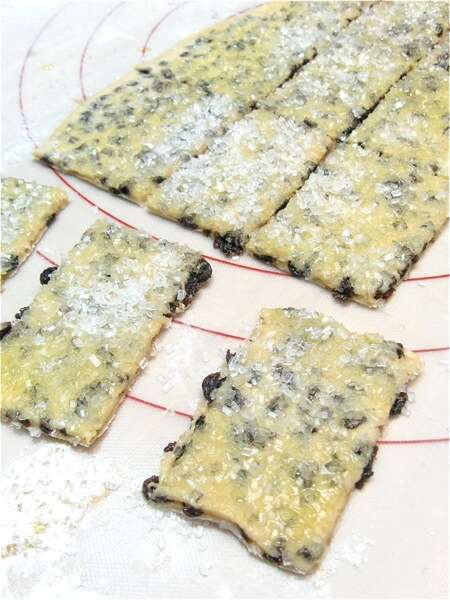 Use a baker's bench knife or a rolling pizza wheel, carefully cut the rectangle of dough into three strips, lengthwise. Then cut each lengthwise strip into five crosswise pieces; you'll have a total of 15 rectangular cookies.

Note: Be very careful if you've rolled the dough on a silicone rolling mat; you don't want to cut the mat when you cut the cookies. 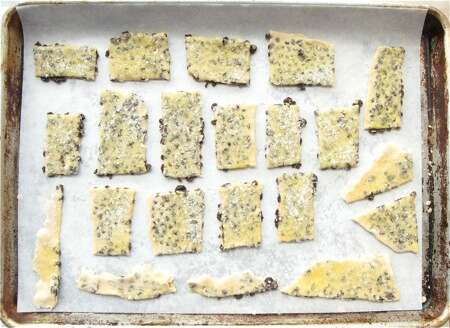 Transfer the cookies to one of the prepared baking sheets, spacing them close together; they won't expand much.

See those raggedy cookies on the bottom? Those are the trimmed edges. Perfectly tasty; they just won't win any beauty contest.

Repeat the entire process with the remaining piece of dough.

Bake the cookies for 14 to 18 minutes, until they're a light golden brown. 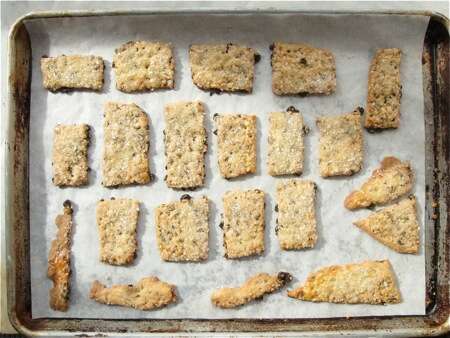 Remove them from the oven, and transfer them to a rack to cool. Or cool them right on the pan, if you don't need the pan for the next batch. 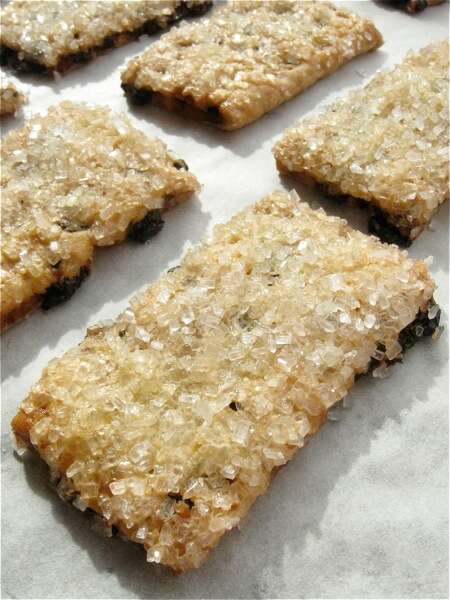 And there you have it: Sunshine Golden Raisin Biscuits, in spirit if not in actuality. 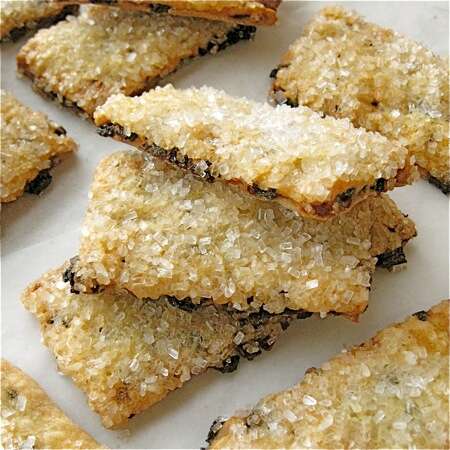 Crisp/tender, buttery, and not as sweet as you might think. This is definitely a Boomer cookie: a veteran of the "swinging" '50s and '60s!

The Sunshine Golden Raisin Biscuits were my favorite. I was wondering why I couldn't find them any more. Now I know! Too bad .... they were really good.
The Vermont Country Store catalog sells them - but they are SOOOO expensive - was hoping to find another source online that were cheaper. I like the not-so-sweet version (no sugar on top)
Growing up these were a favorite. I loved the chewy not too sweet cracker like texture. Looked for them to no avail over the years. My children even as toddlers liked them as well. Thanks for the recipe. Will have to give it a try.
I agree about the bra and Golden Raisin Biscuits!! And putting sugar on top! Yuck! That’s the best thing about them...very little sweetness except from the natural fruit! Us diabetics can eat a little especially with the whole wheat flour and fiber from the fruit and just a couple other ingredients!! We want the originals!! No sugar please!!!
Hi Michele, we don't currently have a recipe for raisin biscuits without any sugar in them, but it sounds like you might be interested in reading our post about reducing sugar in cookies and bars. It might help you tweak your favorite recipes so they fit in better with your diet. We hope this helps. Kindly, Kye@KAF
Oh no! I thought you were going to tell me where I could buy them. I have ordered another kind online but not the same. Maybe I will have to break down and bake them - they are just so good.
Will definitely try them. Why would they get rid of them if everyone is looking for them? It's like you find a favorite bra and the next time you look to buy another, it's discontinued! Oh well.......
We don't have the honest answer to that question, Anita. It can truly be disappointing when something close to your heart disappears and becomes discontinued. Alas, we've resorted to making our own Golden Raisin Biscuits at home, and we have to say we're quite pleased with the results! Kye@KAF
Garibaldi are close but not the same. They are dryer and the fruit is less chewy. I will try this recipe tho!
Until recently ALDI had identical fruit biscuits that now appear unavailable. Ask where they've gone.