The best baking techniques are the ones that break the rules. Methods like reverse creaming for cake (beat butter directly into the flour) or no-knead bread (wait, I don’t need to knead?) not only make delicious — and sometimes superior — results, but also feel transgressive and innovative.

Typical pie crust recipes involve cutting cold butter into flour using your hands, a pastry cutter, or a food processor until the butter breaks into small pieces that can range from the size of a pea to a quarter (and about as flat). Cold water is then added and the dough is only mixed enough to bring it together. By lightly handling the dough and keeping the butter in cold, small chunks, it disperses throughout the dough and creates flaky pockets once baked.

Fraisage takes a slightly different approach to flakiness. To make a pie crust using fraisage, you still cut the butter into chunks and add liquid. Fairly standard. But here’s the crucial part: You then pile everything into a mound on your work surface and use the heel of your hand to smear the butter into the flour. This movement creates longer, thinner sheets of butter that make the crust extremely flaky. It also coats much of the flour with fat, which inhibits gluten development, preserving tenderness.

The method is a hallmark of classic French pastry, and Julia Child herself wrote all about it in Mastering the Art of French Cooking. Other bakers, such as Joanne Chang and Cheryl Day, are huge fans too. "I love the fraisage method," says Cheryl. "It's a great way to ensure you're blending the fat and flour evenly, rather than worrying the fat will leak out while baking. I use it for biscuits and pie dough to create tender and flaky pastries that are consistent time and time again."

This method can also be used to make doughs other than just pie crust: In particular, you can use it for biscuits (like Cheryl) or enriched bread doughs like brioche (but that’s a whole different blog post).

Why does fraisage work?

With fraisage, the butter is smeared into thin layers that become coated in flour, almost like a laminated dough. And like a laminated dough, the larger sheets of butter melt in the oven, generating steam (because, of course, butter contains water) and creating a distinct separation between layers of dough and pockets of air, which translates to major flakiness.

How do I use fraisage to make pie crust?

You can use fraisage to prepare most pie crust recipes, with a little deviation from the recipe instructions. Our Classic Double Pie Crust is a great place to start.

First, blend the shortening into the flour, if called for in the recipe. (Shortening doesn’t contain water, and therefore doesn't need to be fraisaged.) Cut your butter into 1/2" chunks and toss with the flour, using your fingers to rub it in. I tend to keep my butter about the size of coins.

Add liquid as called for in the recipe (this method works with pie crust recipes that call for vinegar or vodka, or just plain water). Stir lightly, just until the dough barely begins to come together — you don’t want to mix completely, the way you normally would with crust.

Dump the crumbly mixture onto your work surface. Using the heel of your hand, push the dough away from you, smearing the butter into long, thin tongues.

Use a bench knife or bowl scraper to flip the shaggy, butter-smeared dough back onto itself, then smear again. Continue until the fat is completely blended into the dough and you have a shaggy but cohesive, evenly blended mass. Form the dough into a disc, wrap tightly, then chill until ready to use.

The most important question: Is it worth it?

I put two versions of pie crust to the test: one made according to the recipe, and one made using the fraisage technique. Let’s see how they compare.

Overall, both pie crusts made with and without fraisage were light, flaky, and tender. You’re certainly not going to miss out on a great pie crust if you don’t use this method. That said, the crust made with fraisage shattered more and was slightly flakier. If you’ve been having trouble achieving a flaky pie crust, this could be a more reliable method to unlock flaky pastry for you.

While the results weren’t hugely different for me, the process of making the dough was much easier with fraisage. I found it helpful to be able to use this method to really bring the dough together into an even, completely cohesive dough that didn’t have dry spots but was still tender when baked. Plus, it felt more efficient to use the heel of my hand to blend the butter quickly and thoroughly into the flour, rather than just my fingertips.

So give it a try the next time you bake a pie. After all, when it comes to pastry, the French are rarely wrong.

Fraisage will work with our Classic Double Pie Crust, All-Butter Pie Crust, and more. If you give it a shot, let us know how it goes in the comments, below. 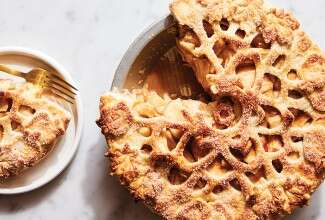 Water till it just comes together.. does this mean less water than recipe?

Hi Pat, most pie dough recipes include a range of water to add, so you're probably not going to add less water than the recipe calls for, but you might add less water than you normally do. Some bakers have a spray bottle of water handy to lightly spray any dry pockets of flour that might remain after fraisage, but normally blending the flour and butter together in this way is quite effective and you may not need any additional water.

Do you have an instructional video for this? I'm having a hard time envisioning the method even with the pictures.

Hi Stacy, we don't currently have a fraisage video, but that's a great suggestion! In the meantime, you may find this pie crust video helpful.

My hands are very hot, and I've never been successful in the crust realm, that said- I will attempt now that I have a granite countertop and perhaps I will have better luck.

So what about Lard? Is it "shortening" or do you treat it like butter in this recipe? (I thought Lard and butter were both shortenings. What is meant here by shortening as opposed to butter?)

Hi Susan! When one of our receipes references shortening, we talking about vegetable shortening. Butter, vegetable shortening and lard are all different kinds of fats that are used to make pie doughs because they are all relatively solid at room temperature and can be usedfor making as frisage. Happy baking!

What’s coming to mind is when, in a hurry, I use a version of this heel of hand press and push the dough into the pie pan instead of rolling it out, etc. Sometimes these 5 minute quick versions turn out amazingly flaky! I think it’s the same principle at work, the smearing of the butter!

Could well be, Jan!

Forgive my ignorance, but would you get similar results simply melting the butter and brushing it on the dough? Then when you chill it, it would end up evenly coating the dough just as if you had used fraisage - only much less messy!