Why we started putting cheese underneath our pizza crust

The more cheese the meltier!

Ah, pizza! Melted cheese on the top, of course. Baked drizzles of crunchy, golden cheese (“frico”) on the sides as well, a recent popular pizza style reflected in our Detroit, Grandma, and other wall-to-wall pan pizzas — like our wildly popular Crispy Cheesy Pan Pizza.

But what happens when you add a layer of cheese to the bottom of the pizza, in that slim, super-hot space between crust and pan?

Award-winning author Joshua McFadden suggests just this in his newest book, Grains for Every Season. (Heads up: At King Arthur, we only recommend the products that we, as bakers, truly love. When you buy through external links on our site, we may earn an affiliate commission.) McFadden notes that he regularly scatters a thin layer of Parmigiano-Reggiano cheese in the bottom of his half-sheet pan before pressing in the pizza dough. Once baked, the cheese partially caramelizes, crisps, and adds another layer of both flavor and texture to his finished pizza.

Enthralled, I decide to test this out, trying a few different cheese options. What about using a good sharp cheddar, or a smoky Gruyère? If a whisper-thin layer is good, will a slightly thicker layer be even better, adding bold flavor and crunchy frico-like texture?

How to achieve the best crispy, cheesy pizza bottom: first, choose your cheese

With mozzarella the star player on the top of many (dare we say most?) pizzas, it makes sense that you might want to balance that cheese’s mild flavor with something more assertive on the bottom. Cheddar’s my favorite, so we’re definitely going there. And smoked Gruyère seems like a good choice, too, complementing the almost smoky char on many pizza crusts.

I also decide to test mozzarella, for those of you who want to stick with a single flavor. And Parmesan, to give author McFadden his due; after all, he started us down this path.

Oil your pan and sprinkle with cheese

I’ve chosen to test the four cheeses in a grandma-style pizza pan, which makes a nice-sized (14” square) pizza easily divisible into four quadrants. A generous glug of olive oil goes into the pan and is swirled around to coat the entire bottom surface; you want to catch and hold the grated cheese you’ll be adding.

Next, the cheese. McFadden suggests 40g (1/3 cup) grated Parmesan in a half-sheet (13” x 18”) pan, which would translate to 4 teaspoons cheese per quadrant in my grandma pan. I decide to wing it and just sprinkle the cheeses in the pan in a thinnish layer.

Lay the shaped crust over the cheese

You know how you usually plop your partially shaped pizza crust into the pan and then gently push it to the edges? This doesn’t work well for cheese-on-the-bottom pizza, since you’ll be pushing the cheese to the edge along with the dough (like a snowplow).

Instead, shape the crust to size (doing this on parchment helps), then gently turn it into the pan atop the cheese. You may need to tug at it a bit to position, but do any significant stretching and pushing before you add to the pan.

Bake the pizza as your recipe directs

Slide the hot pizza out of the pan without delay

Have a rack ready — or a couple of racks, depending on the size of your pizza. Remove the pan from the oven, immediately loosen the pizza’s edges with a spatula, and very carefully slide it out onto the rack. If it sticks, gently slip the spatula under the bottom of the crust to loosen. The longer it cools, the more the melted cheese on the bottom crust will cling to the pan — so make haste!

Let the pizza cool for a few minutes, as you would any pizza; this gives the cheese, both top and bottom, a chance to settle and bond with the crust. Then slice and enjoy.

I’ve found this cheese-on-the-bottom especially good for thicker-crust pizzas, like our 2”-tall Crispy Cheesy Pan Pizza. With all that wonderful soft dough between the crusts, adding flavor and texture on the bottom as well as the top just seems like the way to go.

So, back to the cheese: which is best?

Remember the four-cheese test? Turns out the original recommendation of a thin layer of Parmesan is exactly right. The other three cheeses — cheddar, Gruyère, and mozzarella — didn’t crisp up nearly as nicely as the Parmesan, instead forming an unpleasant leathery layer on the crust’s bottom. Making the layer of cheese too thick probably had something to do with it. But more critically, I believe Parmesan’s super-low moisture level is what makes it the ideal choice: less water/steam = more crispiness.

Next time you make pizza, keep this neat technique in mind. A thin layer of grated Parmesan (or a similar hard cheese: e.g., Romano, Asiago) in the bottom of the pan makes your pizza’s flip side just as wonderfully delicious as its top.

Now that you’ve got the cheese on your pizza's bottom crust covered, here’s how to choose which cheese to use on top: The best cheese for pizza. 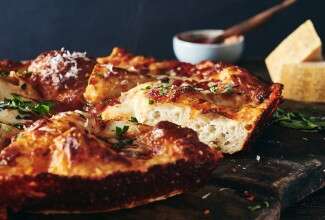 I make your Crispy Cheesy Pan Pizza in a heavy 9x13 instead of buying/storing another pan. About 3 months into serving it weekly, I tried lining my pan with a piece of parchment before putting the olive oil down for the dough. Game changer, it still browns and crisps beautifully, but my pan takes seconds to clean. I feel like that might be a good choice with this cheese crust idea, too. No sticking or scrubbing.

This method is how we’ve always made our grilled-cheese sandwiches. Rather than spreading butter on the bread of the pre-made sandwiches, we melt the butter in the pan (in the area where the bread will be in contact with the pan). Then we sprinkle Parmesan cheese all over that area, then lay the sandwich on top. Once one side is done to the preferred level of golden-brownness, use a spatula to remove the sandwich from the pan, add more butter and Parmesan back on the pan, and set the sandwich back in the pan, ungrilled side down, until cooked to perfection. The cheese adds a wonderful, nutty crunch to the bread. Enjoy!

this sounds great, can't wait to try it

I see there is an asparagus topping for one of your pizzas. Would you cook the asparagus first...or put it on raw? I want to try this cheese crust out and use up some of my asparagus in the process...looks delish!

We love experimenting with other kinds of veggie toppings like asparagus, Karin, and we hope you enjoy it too! For young fresh spring asparagus you could slice it thin and use it uncooked but generally we steam it or sauté it briefly before topping a pizza.

Do you have a dough recipe with the end result being enough for the "Grandma" pizza pan you used? What did your ball of dough weigh to fit in that size pan? Thank you for your help with this. I want to be sure to get it right, and I need to know which dough recipe to use.

We have a great recipe that was written just for this pan on our website here, FG! The Grandma Pizza recipe makes about 785 grams of dough, but you could use a bit more or less depending on how high your dough rises.

I just have to say that this METHOD is great!! I had some naan bread that needed to be used so I made personal sized naan pizzas. The bottom crust was crunchy and delicious, and even as a leftover (love cold pizza) it was still great. Next time I’ll try it with homemade dough.
This method seems like it would work well for anything that you’d like a little ‘crustier’. Note: I used shredded Parmesan Reggiano and a lower rack in my oven.
Thanks for another great idea.

I cannot wait to try this using my pizza stone on the grill!

We'd love to see the results on your grill Peg- happy "baking"!