Like many of us at King Arthur, I’m considering the role of sustainability in my own baking — starting with the environmental impact of my ingredients and replacing cow’s milk with a plant-based milk when possible. My oat milk carton has made the leap from my daily latte to my milk of choice in freestyled pancake batter or a celebratory chocolate tart for a lactose-intolerant friend — all without a noticeable difference in results compared to dairy-based baking.

Every baker is different, and which ingredients work best for you will vary based on factors like allergies, access, nutrition, or just plain taste. Personally, I still use plenty of milk and butter in my baking, but I'm also swapping in oat milk or coconut milk in some recipes. Beyond these two options, there’s no shortage of 1:1 substitutes for dairy, and a visit to the non-dairy aisle now has everything from soy to almond to rice to hemp. So I couldn’t help but wonder: What is the best alternative milk for the planet? Is there one that’s best for the planet?

Upon searching for the answer, I quickly realized ... it depends. While the answer may not be clear-cut, it prompts deeper thought when it comes to where our beloved baking ingredients are sourced and how they’re grown, and I’ve only begun to scratch the surface on a few common alt-milks below. As environment and globalization reporter Ajit Niranjan frankly puts it in this video, “Sometimes it feels like everything you buy is somehow bad for the planet. And yeah, it often is. But some choices are better than others.”

The overarching takeaway? Plant-based milks result in fewer greenhouse gases, use less water, and require less land across the board when compared to dairy milk — so if you're looking to lower the environmental footprint of your baking, making any switch is already a good start.

Compared to crops, cows (and really any livestock, for that matter) need more maintenance, and therefore, result in higher resource usage. Starting with their feed, water is needed to grow those crops, and any transportation of those materials are also factored into dairy’s total ecological footprint. Most notably, livestock is one of the leading sources of global methane emissions.

The biggest caveat with almond milk is how much water is needed to make it. Like other tree nuts, almonds are a water-intensive crop. On top of that, domestic almonds are primarily grown in drought-prone California. Findings from a 2019 study show that one California-grown almond takes an average of 3.2 gallons to produce; while a lifecycle assessment confirms that water usage is the most significant source of almond milk’s global warming potential.

Niranjan puts it into perspective with everyday measurements from a University of Oxford study: a single 200-milliliter glass of almond milk takes about the same amount of water to produce as you would need to take a shower, about 74 liters. (In contrast, cow’s milk requires 124 liters to produce the same amount.)

Legumes, which include soybeans, are a crop that emits some of the lowest amounts of carbon dioxide. Bonus: soy milk is also our Test Kitchen’s favorite vegan “egg” wash. However, soy production is intertwined with meat production because it’s a leading ingredient for animal feed — which in turn requires large land masses (in particular, leading to the deforestation of the Amazon rainforest) to keep up with the high demand for meat.

However, not every soybean harvested contributes to these land issues. “Doing a bit of research and reading the carton can help you find products that come from Canada or the USA and help support ethical practices,” recommends AsapSCIENCE co-creator Mitchell Moffit in this video. In other words, transparent sourcing information can help us consumers choose sustainably grown soy products.

Oat milk gets high marks for its relatively low emissions, land use, and water usage, even when compared to other plant-based milks. At first glance, this may be the “best” option. Remember as an agricultural product, you can choose an organic option to be extra mindful toward sustainability.

Similarly, coconut’s emissions and water usage remain low, which makes it a solid contender as a reigning plant-based milk. There is, however, a broader impact as you zoom out to consider global consumption and growing demand for coconut and coconut-based products.

As coconut milk’s popularity grows, it has ripple effects on the supply chain. This includes deforestation in tropical regions, diminishing yields that lower farmer wages, and inequitable labor practices. Because of the complexities of supply chains and changing environments, ethical sourcing isn't always easy or straightforward. One thing consumers can do is identify brands that are fair trade, meaning the product meets sustainable social, environmental, and economic standards.

So which plant-based milk should you choose?

While comparing several vegan milks, Niranjan explains, “The research shows that soy and oat milk have the smallest environmental footprint. They take little water to grow and have low emissions.” That said, he emphasizes, “compared to cow’s milk, the differences between these vegan milks are pretty small. And the range of plant milks available makes it more likely people will find one they like.”

Ingredient choice is personal for every baker, but ultimately, if you’re looking to replace your cow’s milk in baking with a more sustainable option, any plant-based milk can accomplish that.

For me, what started as just a one-off experiment with pancake batter to use up a carton of oat milk opened up a much broader perspective of what it really means to bring sustainability into my own baking. Will I be an exclusively vegan baker moving forward? Nope, but I'm making choices that work for me and my baking when it feels right — starting with a single swap. 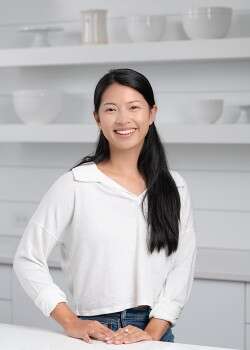 Tatiana Bautista is a writer, editor, and avid home baker and cook. She grew up on Long Island, New York, where her family helped instill a lifelong love of food through homestyle Toisanese dishes and weekly outings for dim sum. From a young age, she’s had an interest in baking thanks to her aunt, w...
View all by Tatiana Bautista

I started drinking oat milk after soooo much label-reading. I can't have anything with added calcium in the morning because of a medication I take, and where I live (not far from KAF-HQ!), more oat milk brands are free from additives than other plant milks. Bonus, oat milk tastes better to me. And let's not forget there are a lot of lactose-intolerant folks. These are just some other considerations in addition to the environment.

Thanks for the article and the comments make interesting reading. Since I don't usually keep cow milk in the house, I have moved from almond to oat milk to (hopefully) make a more environmentally friendly swap. I've been worried that it would have an effect on my baking and it seems as though it should be an ok swap.

Sadly, this is mostly a feel-good do-nothing article
After admitting that plant milk is better environmentally than cow's milk they provide flawed logic to excuse the continued use of dairy.

Thanks for your feedback, Thomas! Ultimately the choices each of us makes regarding ingredients in our baking isn't based entirely on logic, nor are these choices something we feel comfortable dictating to our baking community. Our intention here is to provide information that can help you make informed decisions that make sense for you and your own baking.

I appreciate your comment, since I very much value the dedication to environmentalism you are expressing, however, I would defend the author’s choice of tone toward dairy. When it comes to changing people’s minds about environmental issues, I think we (people on the side of the environment) need to approach it with a gentle attitude to coax others, being cautious to avoid a tone that could make others feel attacked. You can’t change a person’s behavior while they’ve been placed on the defensive. That said, I think this article is a good discussion point for bakers like us.

As a former beekeeper, I'd like to add that almonds are very much more detrimental to honeybees and pollinators than for example oats (as a wind-pollinated grass). Honeybees eat only almond pollen for weeks because of commercial monocropping, leading to poor nutrition and susceptibility to disease. Plus, commercial beekeepers move hives around the country to meet pollination needs (again due to monocropping), which is very hard on honeybee populations. When you factor in the pesticides and herbicides that commercial crops are treated with, almonds are very bad for our pollinators. I think this aspect of sustainability should be taken into consideration when comparing plant-based milk.

I was just about to mention the pesticide problem. Hopefully certified organic grown almonds or any plant based foods, can replace or at least offset the damage.

Is you pea milk detox project certified to be glyphosate free?

Our Test Kitchen team hasn't really worked with pea milk, but it sounds like a great one to add to our list to check out. I think Tatiana said she might give it a go as well, thanks for the suggestion. :)