Arturo Enciso of Gusto Bread in Long Beach, California draws on his Mexican heritage in his artisan-style baking. Inspired by masa harina's cultural and culinary significance, he's incorporated it into his Conchas de Maíz recipe for a fun twist on the classic concha.

Though my parents are both from Mexico, they grew up with completely different tortillas at home. My dad is from the bustling city of Ciudad de México, while my mom was raised in the slower-paced north, in Chihuahua. In addition to the geographical and social differences between these two regions, there was also a culinary distinction: My dad was raised with fresh corn masa tortillas, while my mother’s family made wheat tortillas for their daily meals. And in this duality of south and north, city and country, corn and wheat, they raised me in California. I grew to appreciate both grains, as they were equally a part of my heritage and identity.

Here at my bakery Gusto Bread, both wheat and maize are at the heart of our identity. We make fresh masa from scratch and use it to make laminated pastries, cakes, and more. I’ve also explored using masa harina in breads and quickly fell in love with the flavor combination of wheat and maize — it felt so comforting and nurturing both in substance (these are powerful grains) and in taste.

I didn’t always bake with maize. As a self-taught baker, I spent years developing my craft and honing my skills via recipes by American bakers, food that was nearly all of European origin: pain au levain, galettes, English muffins, rye bread, etc. Eventually, I had a desire to expand beyond these styles to explore making and baking foods I grew up with, like conchas and tortillas (both wheat and corn).

Around that same time, I was compelled to learn about and practice nixtamalization, which is the ancient and magical process through which maize kernels are cooked in alkaline solution and then ground to make masa or corn dough. This method is what allows us to digest and absorb the nutrients maize has to offer, and it’s the technology that helped native civilizations thrive in the Americas. Masa is a food tradition unto itself and can be made into a myriad of dishes both nutritious and delicious; through nixtamal we get hominy, tortillas, atole, champurrado, tostadas, tamales, tlayudas, and more. In these ways, maize was as important to the people of this continent as wheat and bread were in Europe and the East.

Masa harina (which translates as dough flour) is ground nixtamalized maize; when combined with water it becomes dough (masa). Using masa harina to quickly have masa at your fingertips without having to go through the long process of nixtamalization is huge. And through this food alchemy the flavors of the maize change as well — they are heightened and very fragrant, reminiscent of fresh corn on the cob. To me, this makes it a perfect ingredient to add to baked goods.

I was excited when King Arthur developed their masa harina because it meant more folks would have access to explore this amazing food at home. I wanted to provide a recipe that would offer a new approach to this ancient ingredient while staying true to my beloved Mexican heritage. Conchas are a staple in any panadería — their sugary crust is usually a simple combination of flour, butter (or shortening), and sugar, with a flavored powder (chocolate, vanilla, etc.). At our bakery we make conchas with a cacao powder top, for example. Given that King Arthur finely grinds its masa harina, I thought it would make an excellent concha topping with a wonderfully crisp texture and toasted corn flavor, so I started baking.

When making this masa harina topping, I recommend mixing the ingredients until super smooth and creamy, almost like Play-Doh. You want it to hold its shape; if it crumbles, it needs more time in the mixer. The element that makes the biggest difference here is the butter (type, temperature, and texture). For best results use a high-fat butter (around 80%) and leave it out at room temperature until it’s pliable. If that’s not an option, just beat the butter on high with an electric mixer until the texture is smooth.

While mixing, the topping should become a soft but unified paste that doesn’t crumble easily. Be patient, it could take up to 15 to 20 minutes! Stop and check the dough and scrape the bowl as needed until it comes together and can be portioned, patted, and applied to your concha buns. If the topping is too soft and sticks to your hands, try dusting them with a bit of flour or even a coat of water.

In the end, my baking resulted in a roll with a hint of maíz in the crunchy topping that pairs wonderfully with the soft, buttery roll below. When I eat a Concha de Maíz, I’m reminded of a sweet tamal made into a pan dulce, with a tender bun and toasted sweet corn crust. I hope you also enjoy making this recipe and tasting the unique interplay of flavors and textures between wheat and maíz that continue to inspire me as a baker. 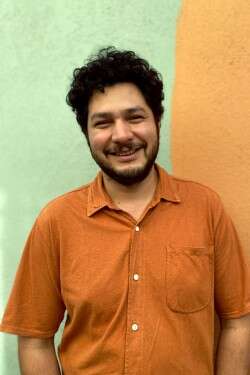 Arturo Enciso is a a self-taught baker based in Long Beach, California. For almost a decade, he’s grown his hobby into a career with his business Gusto Bread, a panadería that uses only masa madre (sourdough) for making bread and pan dulce. His baking philosophy embraces ancient knowledge and using ...
View all by Arturo Enciso

I would really like to try these. Would they work with gluten free flour?

Hi Liz, unfortunately it doesn't work well to substitute any type of gluten-free flour into a regular yeast-raised or sourdough recipe. This is because so much of the rise and structure of this type of baked good depends on the gluten that wheat flour provides. For gluten-free breads, rolls and pizza dough your best bet is to find a similar gluten-free recipe and use the type of gluten-free flour called for in the recipe. We don't have a gluten-free Concha recipe on our website, but I did find this one online.

Thank you for sharing your baking journey and this recipe. I had the Puerto Rican pastry called Pastellitos when I was in high school, in my Spanish class but I am not familiar with Mexican pastries. The only Mexican desserts/baked goods I've had are Fried Ice Cream and Churros . I'm looking forward to giving these a try.