Pastry chef Auzerais Bellamy is the founder of Blondery, a direct-to-consumer virtual bakery that specializes in a distinctive collection of handmade blondies. She's passionate about making the perfect blondie, and she thinks you should be too. Here's why.

Chances are you’ve met a blondie — and no, I don’t mean the Pamela Anderson kind. I mean the decadent and often forgotten relative of the brownie. Maybe it wasn’t by choice? Maybe your friend offered you a little bite and you, thinking it was an odd-looking brownie, accidentally accepted. I won’t blame you for making the innocent mistake of confusing a blondie and brownie merely by their looks. When it comes to how they taste, however, I may silently judge you for confusing these two cousins.

Because in my eyes, blondies are superior to brownies. Yeah, that’s right ... superior.

I’m not downplaying how delicious brownies are. They’re great. Seriously! I’m only saying that blondies deserve their moment to shine too ... and then some. I’ve dedicated 10 years of my life to perfecting the blondie. I went to pastry school in Rhode Island and France. I worked at Michelin-starred restaurants, trained with seasoned chefs, and on a daily basis, I have to explain to someone what a blondie is. Is a little respect and acknowledgement too much to ask for?

To me, a blondie is to a brownie what rugby is to American football, what Justin Timberlake is to Justin Bieber, or what Kanye West is to Drake: all significant and outstanding on their own merits, but outshined when measured by popularity and acceptance of the masses. Blondies are always around, patiently waiting for you — for all of us, perhaps — to take notice of them. Forever the afterthought, and most times marketed as merely a substitute for those who are chocolate-adverse.

Technically both blondies and brownies are classified as “cookie bars,” but that’s where the similarities end. Blondies are made by combining butter and sugar together first, then adding the rest of your ingredients. At my bakery, Blondery, we innovated a unique technique that you can try in your own recipes: We first boil the butter and sugar to create a sticky caramel syrup — basically butterscotch — that we then cool down before adding our eggs, flour, baking powder, etc. Is it getting hot in here or is it just me?

This process of boiling the butter and sugar does wonders for blondies, and it’s the first step in our double-caramelization method. The milk solids and the sugar cook together to create a deep, rich flavor that serves as a base. The process also creates the chewy texture that keeps our bakery consistently sold out of our signature blondies. These blondies never crumble. They’re not cake. They’re not a cookie. They have a unique chewy texture that isn’t quite comparable to a brownie, but melds together to go down as smoothly as if it were melting in your mouth.

Perhaps the best part of blondies is that they’re way more versatile than brownies — they can be any flavor you can dream up. I’d even argue they can be chocolate flavored (i.e., our Brooklyn blackout blondie). Flavors I’ve made at Blondery include red velvet, cinnamon sugar, strawberry rose, and our most popular: pecan and salted caramel. Blondies can truly do anything: I once made an 11-layer cake out of blondies (no exaggeration, here’s the proof).

I know my way around a blondie, so I can assure you that the key is always what ingredients you use. Spring for the good stuff. With a brownie you can cover up the taste of cheap butter with chocolate. A blondie doesn’t let you hide, though — it’s all revealing. It rhetorically asks the question: “Is that the best you got?” So your ingredients better be the best — high-quality butter, eggs, flour (like King Arthur), and mix-ins are all essential.

I liken blondies to vanilla ice cream or a yellow cupcake with chocolate buttercream. The simpler something is, the more perfect it can become. I challenge you to make a blondie and put nothing on it. Not even chocolate chips. When you’re convinced you have something special, do it again.

Maybe you’re not fully convinced?  Maybe you’re a “brownies are still better” enthusiast, unmoved by the allure of amazing flavors, moist texture, or the divine sensation your taste buds experience at the first bite. Then consider an old adage that rings particularly true in this instance: Blondies always have more fun. 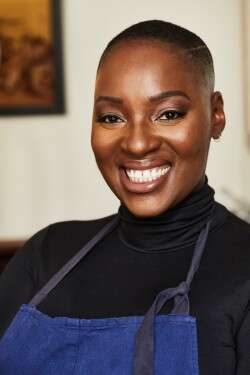 Professional pastry chef Auzerais Bellamy is the founder of Blondery, a limited-release cloud bakery that specializes in a distinctive collection of handmade blondies inspired by generosity. Blondery reflects her passion for giving gifts and contributing to making the food industry a better place fo...
View all by Auzerais Bellamy

This has very little if anything to do w/ the article.....but OMG the picture of your Blondie Cake is insane! It brought tears to my eyes. I just had to say it.

Using Keto friendly KAF brown sugar and flour, my result was extremely dry. I gave to my daughter and said to use like biscotti and dip in your coffee! I even undercooked, so I’m not liking KAF flour for any baking!
I am a seasoned cook ( maybe not a baker), but I’ve had several fails. My wish is to make pizza crust, baking all your recipes with great results. My husband happens to be a part of KAF as a nephew of Walter Sands, a founder.. Steve Voight is our nieces husband. I really want to see new recipes keeping up with a Keto lifestyle and products to match. It may be too much to ask, but thought I’d weigh in.

Hi Lynn, we're sorry to hear you didn't have good results substituting our Keto Wheat flour and our Baking Sugar Alternative into this recipe! It can take a little tweaking to adjust a recipe when using these ingredients. We have developed several Keto Friendly recipes that you may find work a little better for you. We think you'll especially enjoy our Keto Friendly Fudgiest Fudge Brownie recipe and our Keto Friendly Pizza Crust recipe.

I read Ms. Bellamy's article about boiling the butter and sugar to create a butterscotch syrup. Yet, the recipe called for melted butter mixed with brown sugar. This with the other ingredients made "wet sand"; this is not the same as was described by Ms. Bellamy in her technique to create dense chewy blondies. Why is there a discrepancy in the description and actual technique?

Hi Nora, it turns out the Blondie recipe linked in our recent Sunday Recipe Inspiration email was accidentally attributed to Auzerais, but this is not, in fact, her recipe. We apologize for the confusion! We're still hoping she'll find time from her busy baking to eventually share a recipe with us, but in the meantime we're working on developing some tips on how to incorporate her technique to one of our current Blondie recipes.

I love Blondies, and I can’t wait to try this recipe! Just the new technique of boiling butter/sugar together suggests there is a LOT to learn here, and I’m looking forward to it. Thanks so much for sharing this recipe!

How's this the recipe coming? It's April 2022 and the comments from Dec '21 said the recipe would be "in a few months"? Very curious about "boiling the butter & sugar" phrase from the author.

Hi Burton, as noted in an earlier reply, Auzerais has been very busy at her bakery and hasn't had time to share a recipe with us yet, but we're hoping to introduce some tips on how to incorporate her technique into one of our current blondie recipes in the near future.

Three months have passed ... has a recipe been published using her 'technique' yet!