How to make cinnamon rolls in advance

“I want to serve cinnamon rolls hot out of the oven for breakfast. So can I make them partway the night before, and then bake them in the morning?” Figuring out an overnight breakfast when it involves yeast can be quite a challenge.

A ton of readers call, email, chat, or blog-comment us with the question above. Aside from “My bread didn’t rise,” how to make cinnamon rolls (or sticky buns) ahead of time is one of the single biggest yeast-baking quests people have.

This isn’t surprising. Baking with yeast takes time, and when it comes to breakfast bread and rolls, nothing approaches fresh from the oven. So how do you manage to have something fresh and hot on the table without getting up at 2 a.m. to mix and knead the dough, shape the rolls or coffeecake, and let it all rise before baking?

Do you make everything start to finish the day before and reheat the next morning? You can, but reheated just isn’t the same as fresh from the oven. And that nice white icing atop the cinnamon rolls? Melted and gone. As for getting up in the middle of the night, it’s a distinct possibility for night owls and those with newborn babies, but for the rest of us? Not a chance. 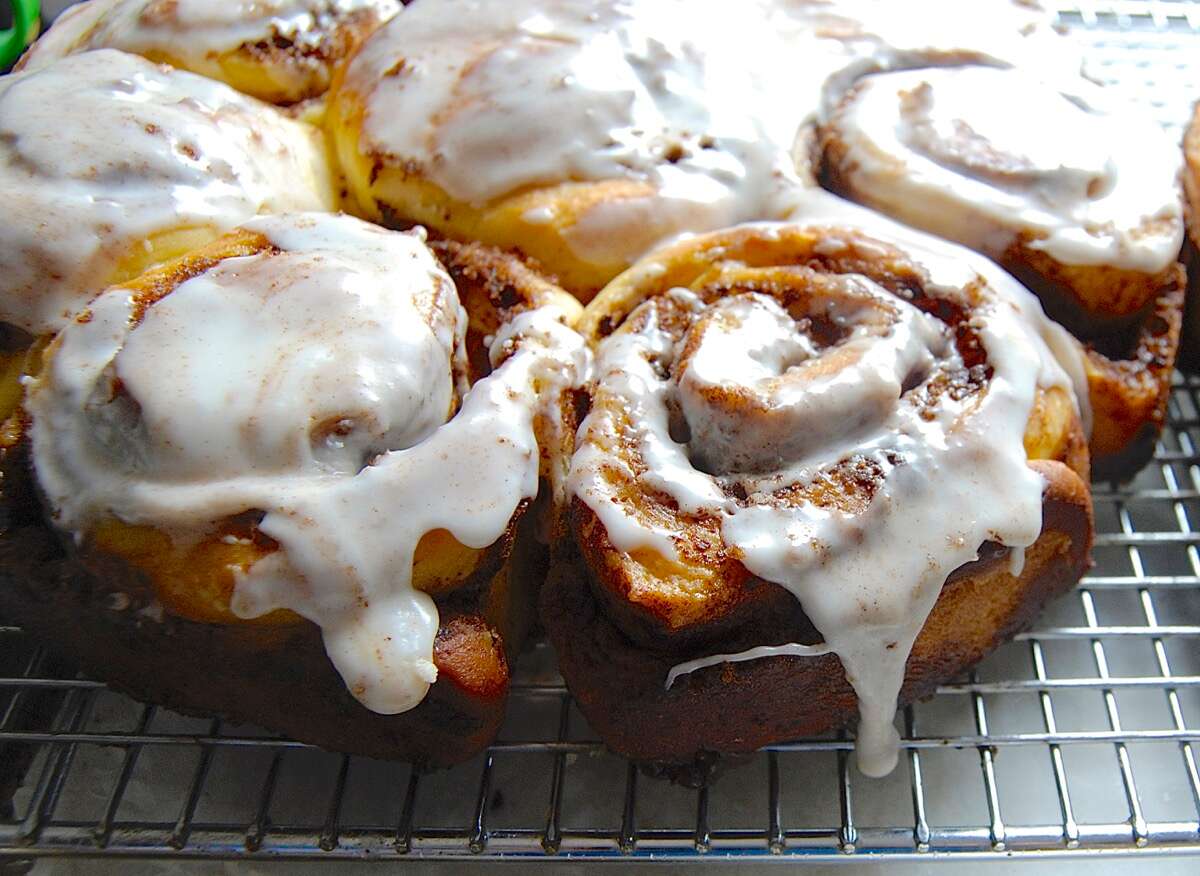 So what’s the best way to produce an overnight breakfast of fresh, hot sweet rolls?

Divide and conquer! Make and shape the rolls the day before; refrigerate overnight; and bake the next morning.

Sounds simple, doesn’t it? It is, once you nail the timing issue: how much should you let your sweet rolls rise before popping them into the fridge?

Let’s make some rolls and find out. 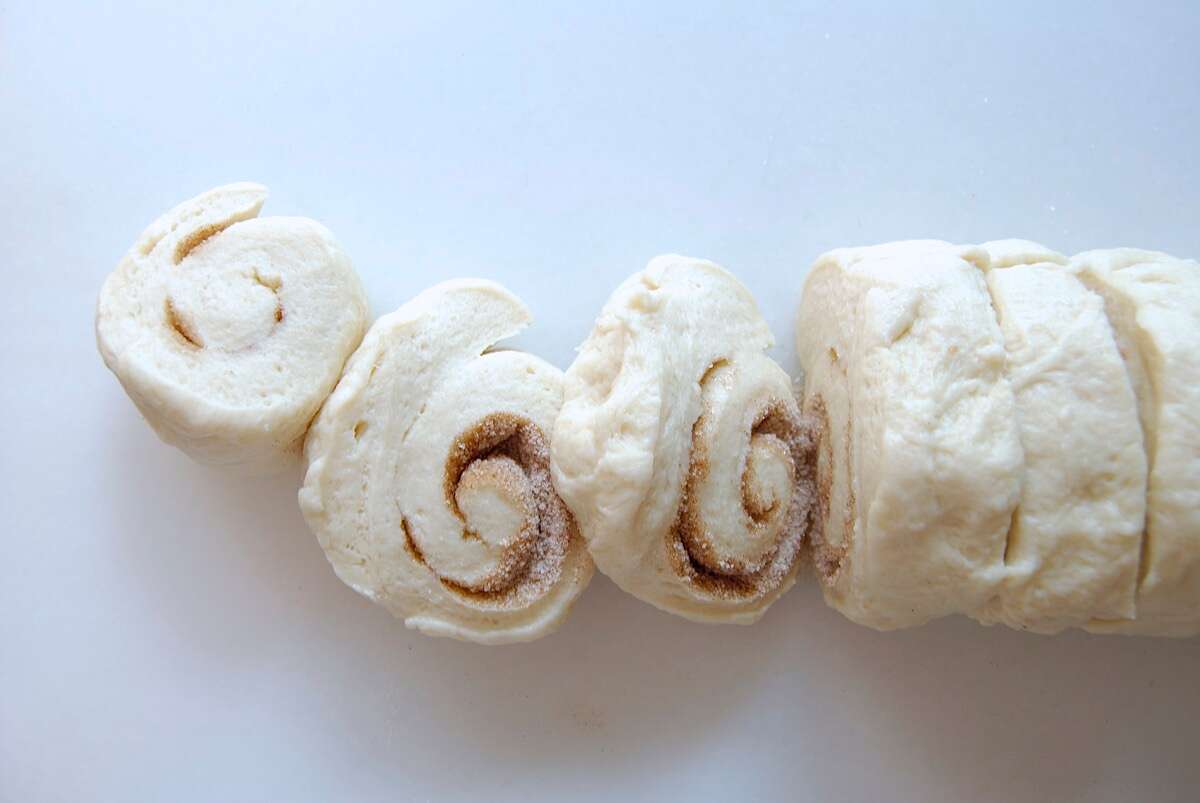 I make the dough for Cinnamon Rolls, let it rise, deflate it, and roll it out. Once sprinkled with cinnamon sugar and rolled into a log, I slice the dough. 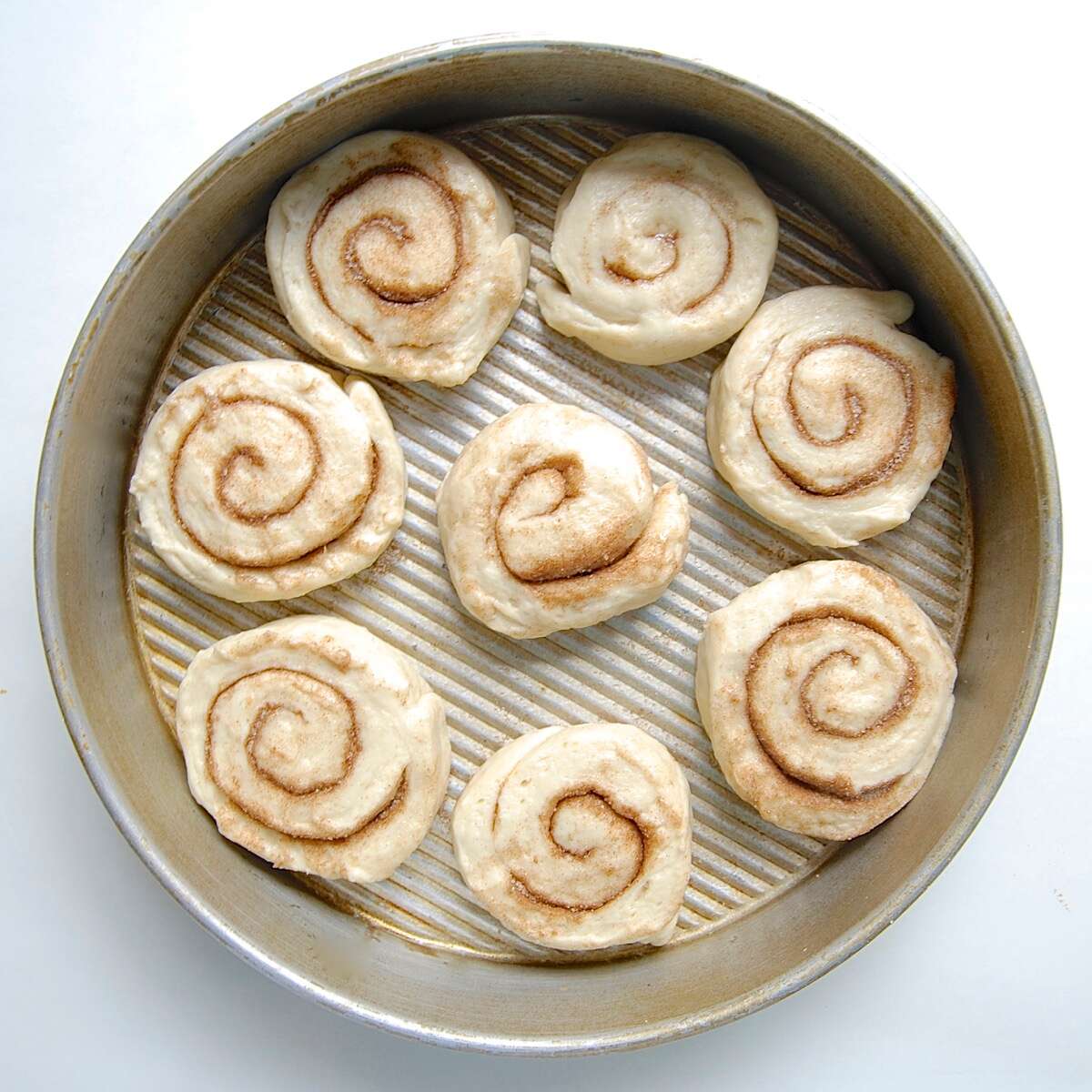 Put the rolls in a pan

They’re in the pan. What next?

I cover the pan and let the rolls rise until they're about three-quarters of the way to fully risen: touching one another and starting to rise vertically, as well as covering the bottom of the pan.

I refrigerate the rolls overnight.

Now, if your dough doesn't contain much butter — say, less than 1 tablespoon butter per cup of flour — let the rolls rise only halfway. Why? When chilled, butter becomes hard — which stiffens the rolls and prevents them from expanding as much as they might. So the less butter in dough, the more it rises in the fridge.

Likewise, if you're using a glass or ceramic pan, let the rolls rise only about halfway; it'll take longer for their temperature to drop once you put them in the fridge. 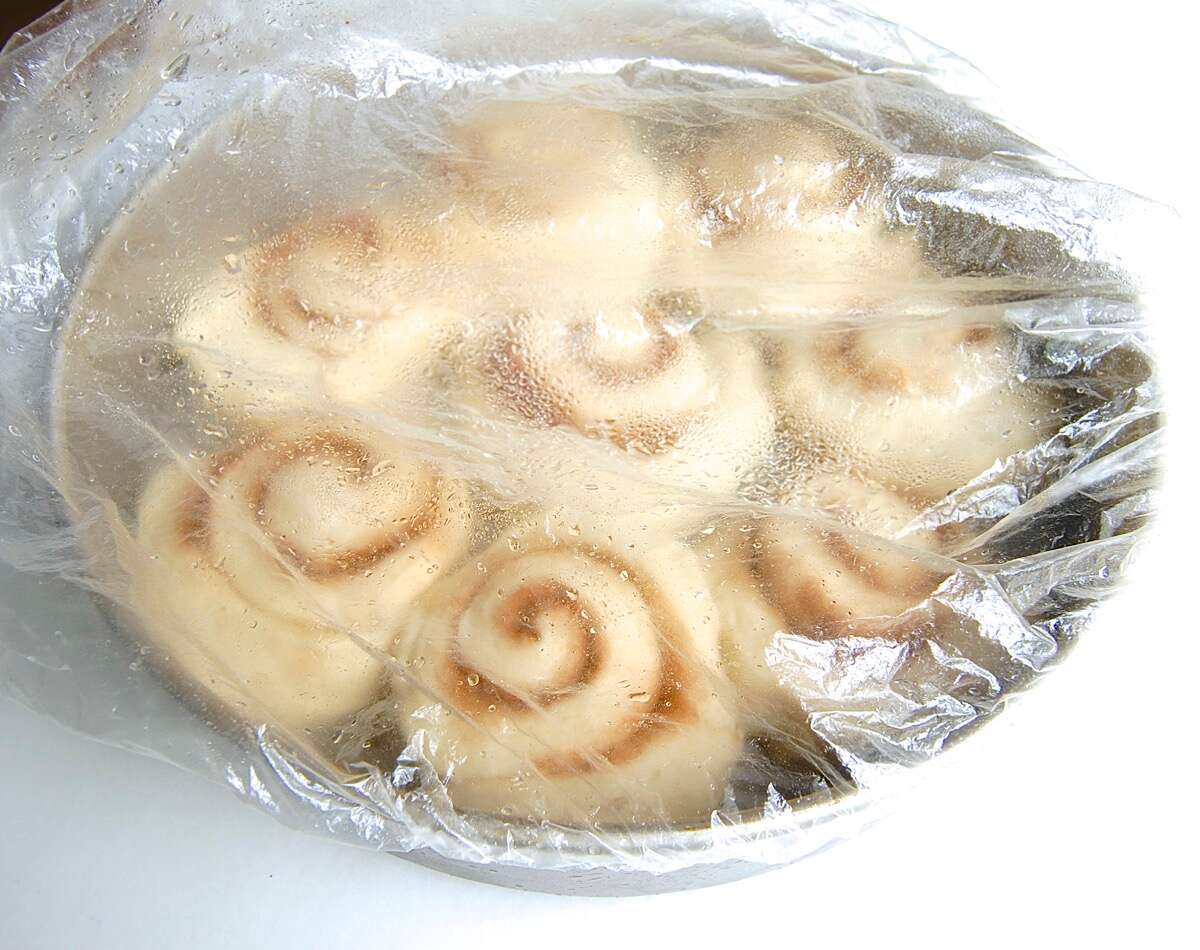 Next day, I take my rolls out of the fridge and let them rest at room temperature, still covered, while I preheat the oven.

I actually have some extra time, so I let them continue to warm to room temperature. I suspect I'll get a bit more rise out of rolls that have lost their refrigerator chill. 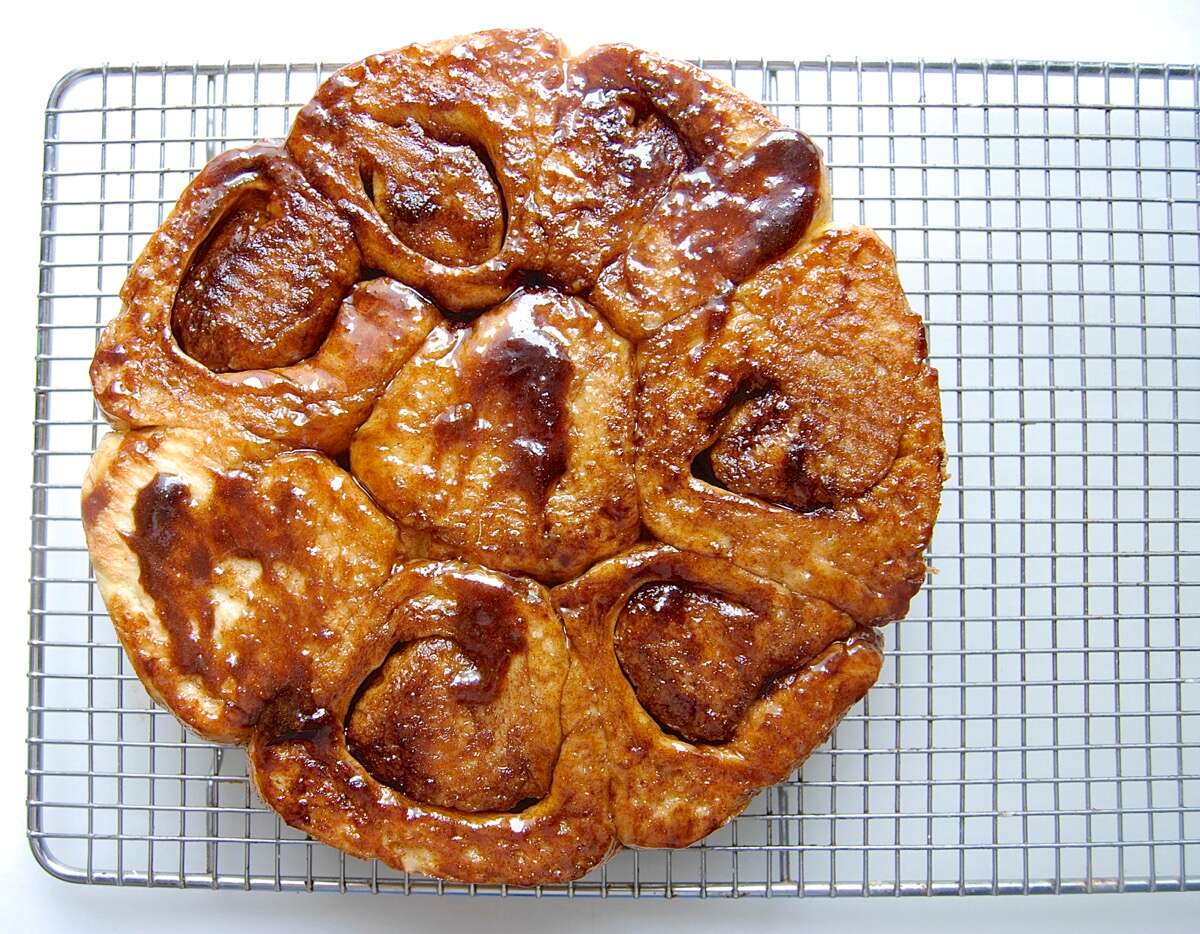 I bake the rolls and turn them out of the pan.

They look pretty yummy upside down, don't they? 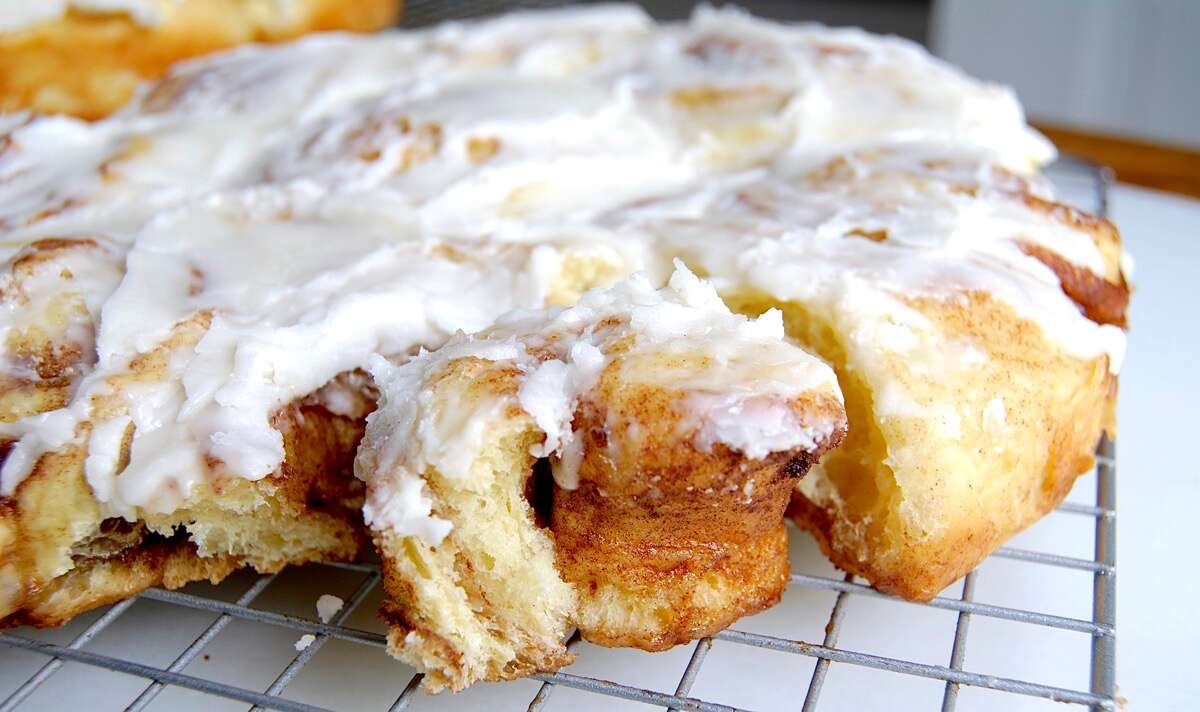 Still, what's a cinnamon roll without its white frosting, right?

Now there's one catch to all of this, and I discovered it the hard way. I was baking Cinna-Buns on a very hot, humid day, and my dough rose super-fast in the bowl. 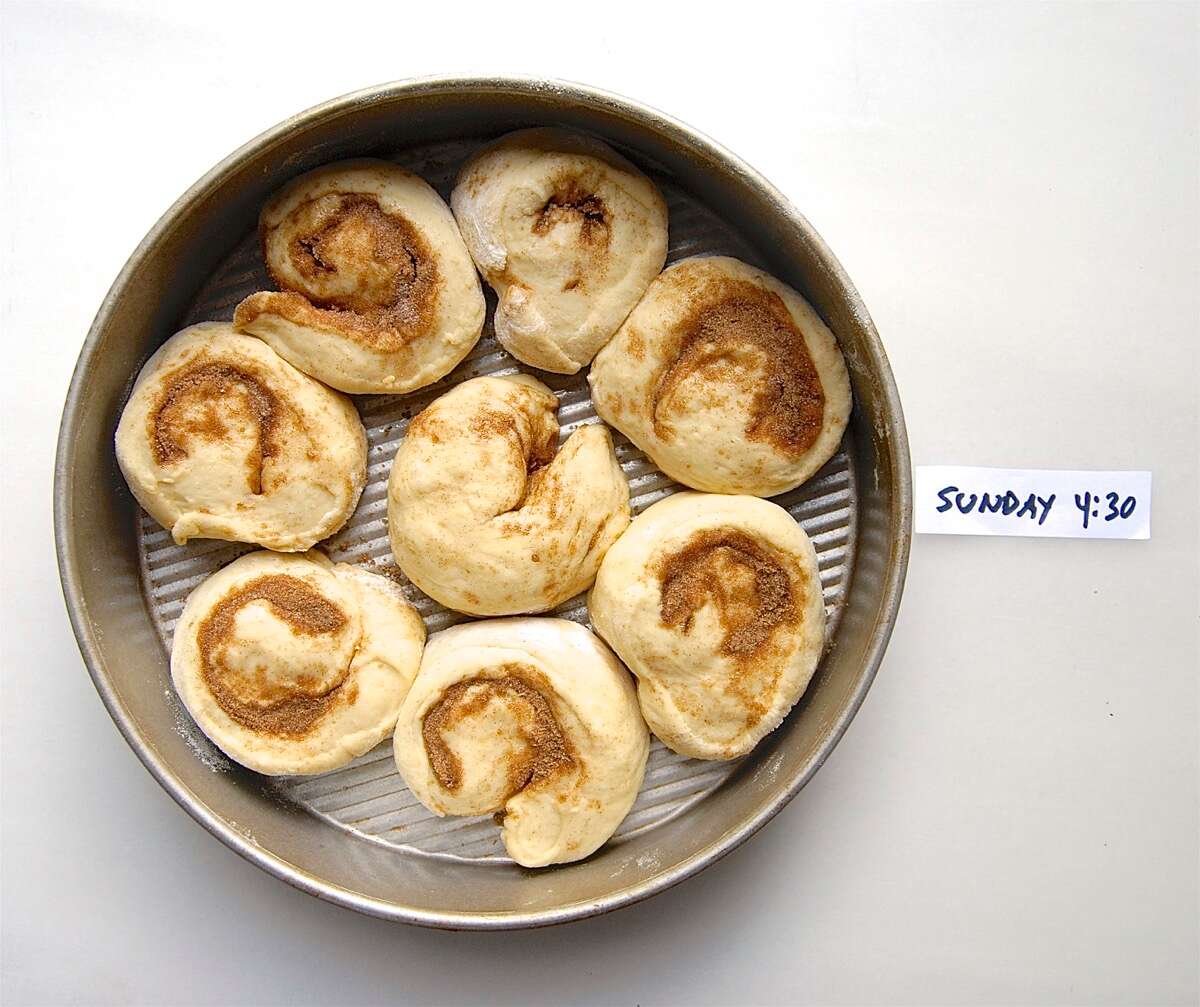 I shaped the rolls and plopped them into the pan. 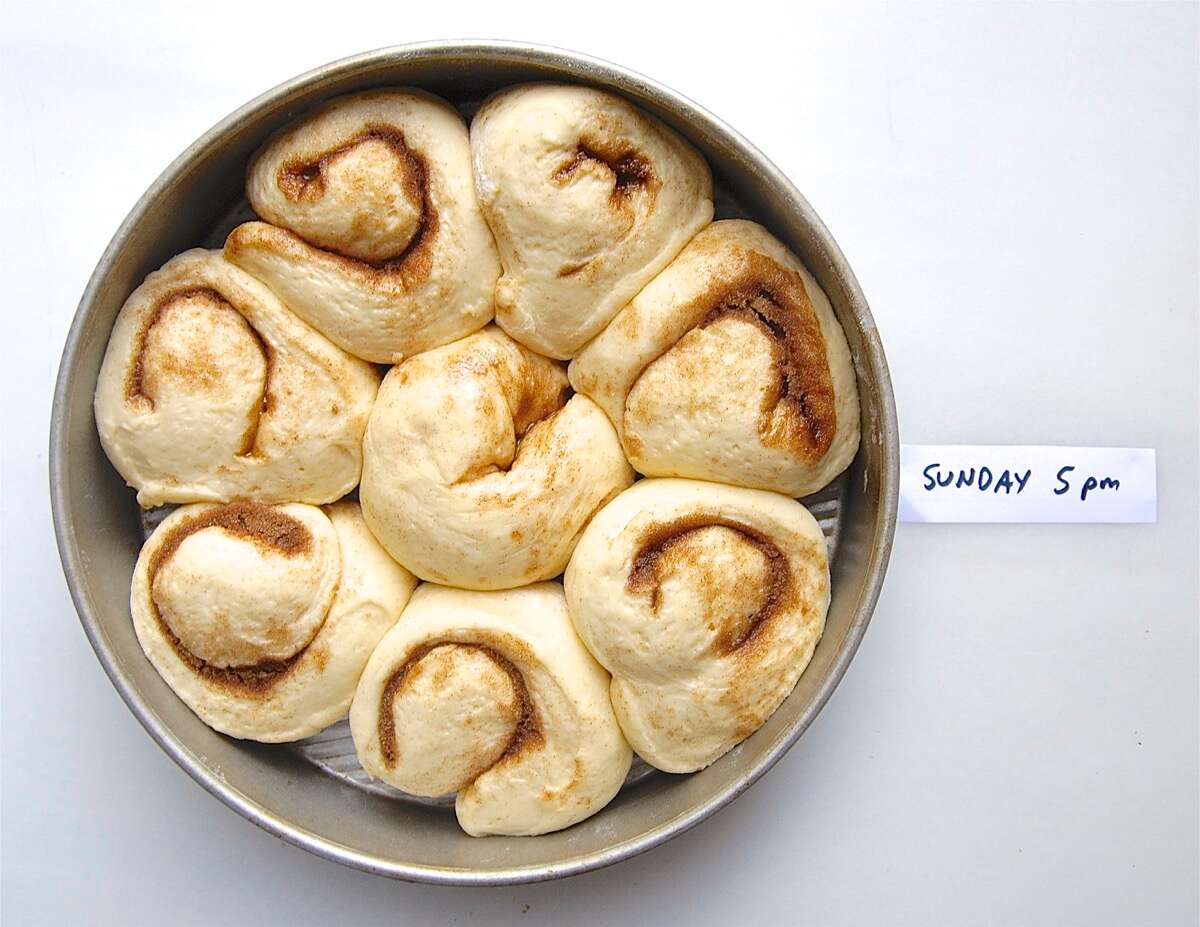 Half an hour later, they'd filled the pan and were rising straight up, headed toward fully risen.

I quickly covered them and put them into the refrigerator... 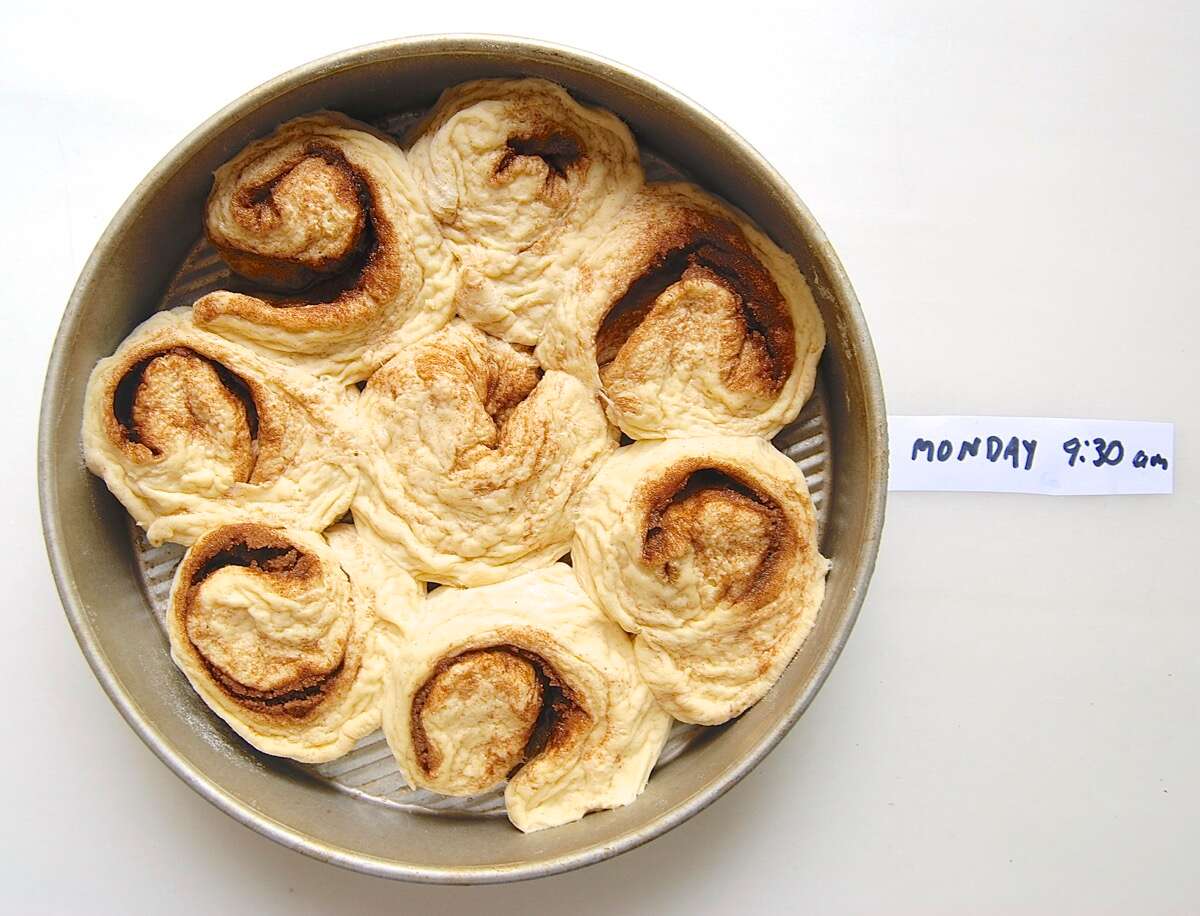 ...but it was too late. Overnight they'd risen to peak volume, and then deflated.

The good news is, I baked them anyway and they had a decent amount of oven-spring; so they weren't a total loss. But lesson learned: I need to keep an eagle eye on rising cinnamon rolls when it's hot and humid in my kitchen. 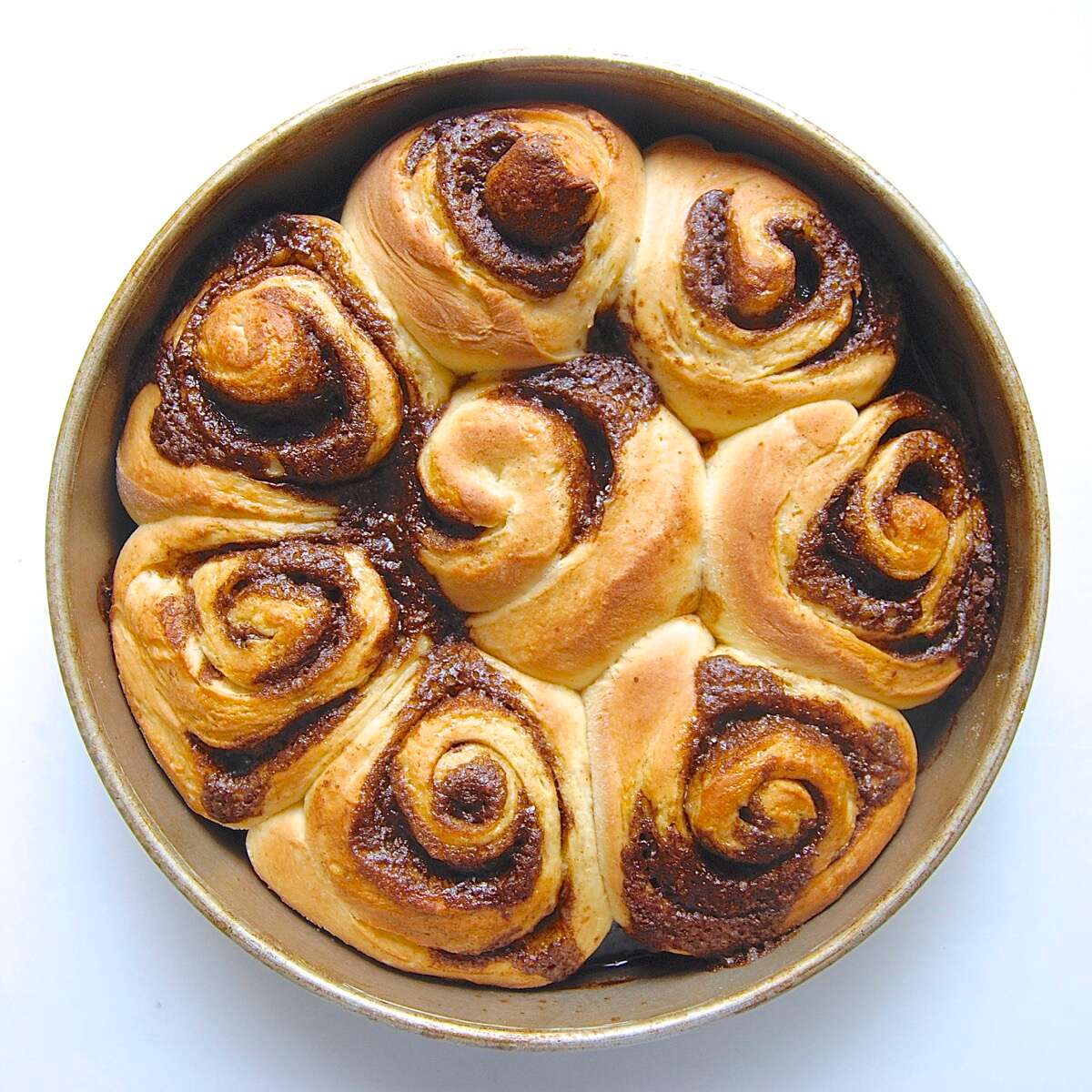 Before starting the testing for this post, I'd assumed that shaped cinnamon rolls, placed in the refrigerator overnight (my fridge registers 39°F), would continue to rise (albeit slowly).

But time after time, I put my rolls into the fridge — unrisen, partially risen, nearly fully risen — and they didn't rise at all overnight. As the tech folks would say, WYSIWYG: what you see is what you get.

The sole exception was the rolls I tested on a super-hot and humid day, the ones that rose so quickly that even the chill of the fridge couldn't stop them, and they eventually collapsed. But I'm going to consider those an outlier.

So here's the overnight breakfast process in a nutshell:

Make your rolls, put them in the pan, cover the pan, and let them rise about three-quarters of the way. Why just three-quarters? Because your dough may be really lively (or your fridge may be a bit warmer than most), and you don't want to chance the dough rising and then collapsing.

Next day, take the rolls out of the refrigerator and let them rest at room temperature while you preheat your oven.

Bake the rolls; they'll show some oven-spring (additional rise) as they bake.

Remove from the oven, and enjoy freshly baked cinnamon rolls or sticky buns for breakfast — no 2 a.m. wakeup call required!

What's your favorite overnight breakfast, something you can prep ahead, then bake in the morning? Please share in comments, below. 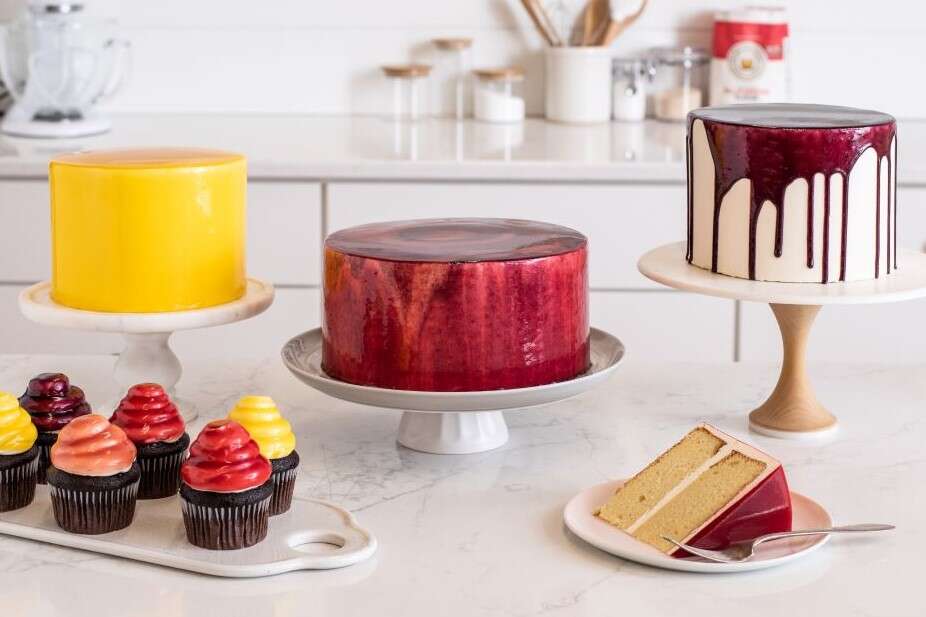 Hello wonderful KAF bakers,
Do you have a gluten free version of the cinnamon rolls recipe?
Thank you,
Danielle

Good question, Danielle! While yeasted recipes like this one aren't a good fit for simple flour swaps, we do have a delicious gluten-free cinnamon roll recipe, which you can find here: Gluten-Free Cinnamon Rolls. Happy baking!

I have always wanted to make these but do to the time required I have not done so. Thanks for the overnight refrigeration tip. Can't wait to make them now.

I make Cinnamon Rolls frequently and I love your helpful hints. I will be trying this method. Thank you for all your tips.

Worth Appreciating. Great work.
I use your Big Batch, Frosted Cinnamon Rolls recipe and everyone loves it! I make them for our quarterly fellowship breakfast at church. I mix and shape the rolls, put them in glass pans and into the fridge. I get up about 5 the next morning and let them rise and come to room temp then bake them about 7:15 so they'll be done and ready to frost then packed to travel. My problem: even tho they are in insulated carriers, they aren't warm when served. Any suggestions?
There are a few different things you can try, Patty. If there's an oven that can accommodate your rolls at the place where the breakfast is served, consider covering the buns with foil to protect the frosting and then reheating for about 5 to 10 minutes in a 350*F oven, until they're warmed through. If that's not an option, you might consider using hot water bottles (the kind that can lay mostly flat) and tuck them underneath the pans of rolls, filled with boiling water. If you heat up the inside of the insulated carrier, then the rolls will really stay nice and warm until you're ready to enjoy them. Good luck and happy baking! Kye@KAF

I'm always afraid to use glass baking dish in the oven after being in the fridge .
i guess setting out a couple hrs the dish warm up enough?

Hi Gail! The time at room temperature while the oven preheats and the dough rises, gives the glass time to warm slowly without causing an issue.

I use a recipe that I found online a while ago that's called "45 minute cinnamon rolls". It involves only a 5 min rest and then letting the rolls rise in a warm (but turned off) oven for 20 min. Then baking for another 20 min. I was skeptical about this method, but they are so good! Start to finish, it takes me about 1hr 15 min to make them (not 45 min), but my kids are always willing to wait for these!

Make the most of our 2021 Recipe of the Year