Perfectly Pillowy Cinnamon Rolls (aka PPCR), our 2021 Recipe of the Year, are simply the best cinnamon rolls you’ll ever make. Reviewers love their rich flavor and strikingly large size, but their most beloved asset is probably their texture: You’ve never sampled a cinnamon roll that’s softer, moister, and more tender than these.

Until now. Meet Perfectly Pillowy Cinnamon Rolls 2.0, which give new meaning to the term “soft and gooey.” And the best part? One simple ingredient is all that’s needed to take these reader-favorite rolls from great to greater: heavy cream.

How to lift your cinnamon rolls to the next level

The idea for this recipe hack originally came from TikTok and quickly moved to YouTube, where you can find people pouring heavy cream (plus a sauce made from butter, brown sugar, and cinnamon) over their Pillsbury Grands! refrigerated cinnamon rolls before baking, thereby creating (so they claim) Cinnabon clones.

Maybe rolls that start life in a pressurized can need all that help. But since our PPCR are already at the top of their game, all they really need is a simple drizzle of heavy cream before baking to inch them even closer to heaven.

Why does cream make such a difference in your cinnamon rolls? As the rolls bake, the cream in the bottom of the pan heats up. Its liquid migrates up into the rolls, making them moister. And the remaining fat, milk solids, and milk sugars coalesce into a sweet, sticky syrup that coats the rolls’ bottom (which become their top when you turn them out of the pan).

First, make and shape the rolls and let them rise

As mentioned, the TikTok recipe begins with store-bought canned rolls. But I prefer our PPCR recipe for flavor, texture, and its simple ingredients.

Start by making Perfectly Pillowy Cinnamon Rolls up through step 12, where you create a filled log of dough ready to be sliced into rolls.

Instead of slicing the log into eight pieces as directed, elongate the log by rolling it gently under your fingers until it’s about 16” long. Cut the log into 16 pieces.

Lightly grease two 8” round cake pans. Arrange the rolls in the pans, eight per pan, flattening them slightly. Cover the pans and let the rolls rise until they’re touching each other and visibly puffy. This will take anywhere from 30 to 60 minutes or so, depending on conditions in your own kitchen; go by how the rolls look, not by the clock. The “poke test” is an invaluable technique here; read all about it in How do I know if my bread dough has risen enough?

When the rolls are nearly fully risen, preheat the oven to 375°F with a rack positioned in the top third.

Then, drizzle the rolls with cream and bake

Bake the rolls on the upper rack for 25 minutes, until they feel set; they’ll still look quite pale, with perhaps just a touch of brown around the edges. Remove them from the oven.

Working with one pan at a time, use a flexible spatula to loosen the rolls from the edges of the pan. Gently work the spatula toward the center of the pan as well, lifting the rolls slightly. Turn the pan over onto a cooling rack. Repeat with the second pan.

Carefully lift the pan off the rolls. If they don’t drop right out, tap the pan against the rack, and/or use your spatula to loosen them some more. Repeat with the second pan.

Once the rolls are out of the pan, scrape any sticky residue in the bottom of the pan back onto the rolls. They’ll look a bit wet at first, but as they cool any thickened cream will soak back in.

To frost, or not to frost?

While our original PPCR recipe calls for frosting, these cream-soaked rolls don’t need it. Serve them bottom side up (like sticky buns) and trust me, no one will miss the frosting. The cream seeps into the rolls’ spirals and mixes with the cinnamon-sugar filling to form its own sticky topping.

Unlike our Perfectly Pillowy Cinnamon Rolls (which are luscious either warm or at room temperature, and retain their soft texture for days), these rolls are best served fresh and preferably warm. If you’re not going to serve them within an hour or so of baking, cover them and leave them at room temperature for a few hours, or refrigerate. Just before serving, reheat the rolls in a 350°F oven, lightly tented with foil, for about 10 minutes; this will both bring out their flavor and revive their gooey, sticky texture.

Do you take pride in making your own homemade cinnamon rolls? Then be sure to use the very best cinnamon possible. We offer two varieties of ground cinnamon: Vietnamese (assertive) and Indonesian (mellow). 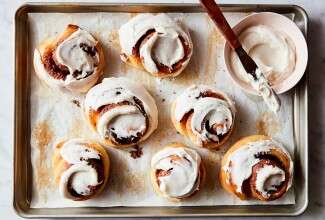 Would this method also work with your keto cinnamon roll recipe?

Tried cream on pan of cinnamon rolls today
Did not work for me. No gooey topping at bottom of pan
Used dark not stick cake pans
Some boil over
Rolls good but no gooey topping
Rolls browned well
Baked in convection oven

We're sorry this method didn't work well for you, Cecilia! I would recommend trying to bake them on "Regular Bake" rather than "Covection Bake," if you have that option.

My mom used heavy cream in her cinnamon rolls back in the 70’s. She made wonderful rolls and liked to try a few different methods. I loved the cream method but I could never get it quite right. I probably poured too much cream in so will now try your recipe. Thanks.

Helping people re-discover treats from past days is one of our favorite parts of baking Valerie! Best of luck with this recipe and don't hesitate to reach out with more questions as you recreate these amazing rolls.

That is not drizzling. That’s pouring.

Would this approach work with a cinnamon Kugelhoff cake in a bundt pan ?

Hi Steve, we're concerned that the addition of heavy cream during baking would cause the Kugelhoff to stick too much to the bundt pan. We wouldn't recommend this.

I made the Perfectly Pillowy Cinnamon rolls for my Bible study group this morning, and added heavy cream to the pan, baked, and when they came out of the oven they looked like a picture in a food magazine. I also drizzled icing over the top as well. Perfect rolls, and my friends loved the sweet and gooey flavor. So delicious. I will be making these again for sure.