"I woke up at 2 a.m. this morning and couldn't fall back asleep for a while, and I found myself wondering what would happen if you rolled up your cinnamon roll log but instead of slicing it into separate rolls, you cut it like an épi de blé."

This brilliant musing from my fellow employee-owner Kat about whether cinnamon rolls could be cut to look like a sheaf of wheat hit my inbox on a cold morning in March. Kat continued, "Do you think the filling would all spill out, or could this be really fun?"

This could be totally fun. I practically ran to the kitchen to give it a try.

There was no question about which cinnamon roll recipe I'd use — it had to be our 2021 Recipe of the Year, Perfectly Pillowy Cinnamon Rolls. With a tender, milk-enriched dough and brown sugar-cinnamon filling, these cinnamon rolls are exceptional, no matter how you slice them.

The idea of presenting this package of cinnamon-y deliciousness in a new way was thrilling. And Kat's middle-of-the-night épi de blé musing was just what I needed to start thinking beyond the simple cinnamon roll.

It's a match made in yeast baking heaven: an épi de blé starts out as a long cylinder of dough, similar to a cinnamon roll once the dough and filling are rolled up. Instead of being cut crosswise into slices, épi de blé is sliced partially through at an angle, and the cut pieces are splayed out from side to side.

The result is brilliant: With just a few simple motions, the baked loaf evokes a stalk of wheat that's equal parts distinctive and beautiful.

To make it: Prepare a batch of your favorite cinnamon roll dough (our Perfectly Pillowy Cinnamon Rolls recipe is highly recommended). Mix up the filling and spread it evenly over the dough, leaving one long edge bare.

Working from the long edge that's covered with filling, roll up the dough and pinch the seam shut. Let's call this the "cinnamon roll log," for simplicity.

Place the cinnamon roll log on a piece of parchment or baking sheet. Starting at one end, hold a pair of kitchen scissors at a low angle, and open the scissors so they're wider than the log.

Let the dough rise until puffy, and bake as directed in the cinnamon roll recipe, adding additional time as necessary. The loaf should reach an internal temperature of 190°F and become light golden brown when it's done, about 20 to 25 minutes.

Other ways to shape your cinnamon rolls

The sleepless night inspiration got me thinking: the épi de blé is a stunning twist on classic cinnamon rolls, but it's certainly not the only way to get creative with shaping. Most cinnamon roll dough is easy to handle and just waiting to be twisted, sliced, and shaped into new forms.

Here are some additional shaping methods to try:

Take a bit of inspiration from a classic babka, and turn cinnamon rolls into a gorgeous twisted loaf.

To make it: Starting with a cinnamon roll log, cut it down the middle lengthwise, twist the two strips around each other, and place in a loaf pan. For details, follow the shaping directions outlined in our Cinnamon Babka recipe.

The babka-inspired loaf is almost too beautiful to cover up with icing. If you opt for frosting, use a modest amount so that the shaped bread beneath is still visible.

Another attractive option? The mock braid. It's just plain striking, like a goddess with fairy fingers wove delicate dough into a beautiful masterpiece. In reality, though, it doesn't even require braiding!

To make it: Roll your dough about 1/8" thick and sprinkle the filling down the center third of the dough, lengthwise. Cut strips along each of the outside sections, then cross them diagonally over the filling so they overlap. Follow the shaping directions for our Braided Lemon Bread for best results. 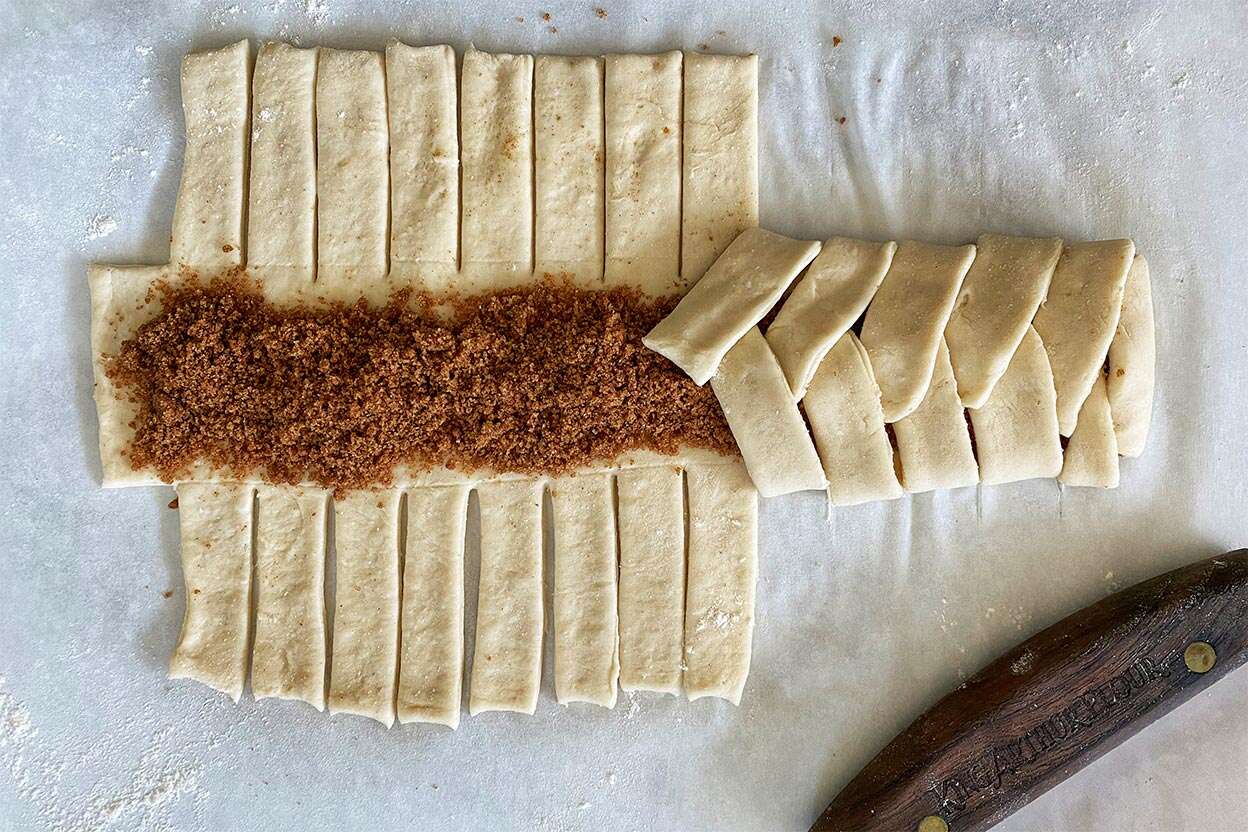 To see this shaping process in action, check out our video, How to make a filled braid.

You can leave your loaf bare to display the braided pattern, or drizzle it with glaze or swirls of frosting. It's the literal icing on the cake (or bread)!

The humble cinnamon roll can also be transformed into a circular centerpiece fit for a special occasion. Known generally as a tea ring, this wheel of cinnamon rolls offers a unique appearance while still paying homage to the traditional cinnamon swirl.

To make it: Start with a cinnamon roll log, bring the two ends together, and cut 1"-thick slices about three-quarters of the way through the dough.

The final touch includes gently stretching each slice away from the center and twisting it to expose the center swirl. This creates a gorgeous overlapping look perfect for tear-and-share eating, similar to the épi de blé. For detailed shaping instructions, see our Swedish Tea Ring recipe.

As a final touch, your Swedish tea ring can be adorned with frosting, or not — leaving it plain highlights the beautiful shaping.

If you're looking for something that's slightly more rustic but still has all the best parts of a classic cinnamon roll, try what's known as a "butterflake" shaping approach. Cinnamon roll dough is cut into small rounds, which are then covered with cinnamon filling, folded in half, and stacked tightly together in a loaf pan. The result is a loaf with buttery cinnamon filling in every nook and cranny.

To make it: Prepare the cinnamon roll dough and filling as directed in your recipe. Then use the shaping process outlined in our Butterflake Herb Loaf, using cinnamon filling in place of the butter-herb mixture.

If you're looking to switch up your cinnamon roll game but want to still serve individual rolls, check out our blog post, Making cinnamon rolls 5 different ways.

Are baking questions or brilliant culinary experiments keeping you up at night? If so, we hope you'll share them with us in the comments, below.

Recently a baker substituted a blueberry filling instead of cinnamon in her pillowy rolls. Will she share her recipe?

Hi there, Millie! We've shared a couple of different blueberry versions recently. In early June we shared a blueberry lemon version on Instagram from @buttermilkbysam! She used the filling from our Lemon Brioche Buns with Blueberry Filling recipe. We also have an article, 5 ways to fill cinnamon rolls ... without the cinnamon, that has a blueberry-filled roll. We hope this can help and happy baking!

I would like your recipe for blueberry filling please.

Hi Betty, I don't have the exact recipe you're looking for, but this blog post walks you through how to use blueberry jam or preserves as a filling for the cinnamon rolls, and our Blueberry Hand Pies recipe includes a recipe for a lovely blueberry filling.

I have braided the individual rolls before placing them in a muffin tin and they turn out beautifully. At Step 12 of the recipe, fold the dough into thirds overlapping the center seam. Then roll to 4”X16”. Cut dough into 2” wide strips, the cut each strip into thirds leaving about 1” at the bottom uncut. Braid and carefully put into the muffin tin braided side up.

was wondering if. once the dough has risen can it be refrigerated overnight for baking in the morning

Hi there, Joyce! For best results, we recommend making this recipe from start to finish on the same day. The tangzhong starter helps to keep these rolls nice and soft for days. To reheat before serving, we recommend lightly covering the rolls with foil and warming them in a 300°F to 350°F over for 5 to 10 minutes. Just before serving, add icing if you'd like and you'll be ready to present your breakfast goers with warm, soft cinnamon rolls!

I love the original recipe & the many shapes it works in. Has anyone tried adding coarsely chopped pecans to the dough, or filling.

We're glad to hear that you're enjoying our recipe, Elizabeth! You can certainly add chopped pecans to the filling if you'd like! We'd caution against adding them to the dough, mix-ins can make it difficult to roll the dough out to the proper dimensions. Happy baking!