Going fancy without the fuss

You know how things sound so much fancier – more festive, even more exciting – when you say them in a foreign language?

Or "petits pois." Fairly rolls off the tongue, doesn't it? Unlike "peas." Or even the more refined "baby peas."

And then there's the lofty profiterole (say pruh-FIT-uh-roll), denizen of mid-scale restaurants coast to coast. OK, in plain English, it's a cream puff shell stuffed with ice cream and drizzled (or more often, drowned) in fudge sauce. But give it a French name, and it's elegant; refined. Worthy of the extra dollar or two the restaurateur tacks onto its price, compared to that slice of apple pie or dish of ice cream.

And the taste? Trust me, your white-flour audience will never know the difference.

Autumn is stealing quickly onto the landscape, with its palette of golds, oranges, and rich browns. So a whole-grain cream puff stuffed with sautéed apples and ice cream, and drizzled with caramel sauce (salted, naturally) – all the components in varying shades of gold – is a perfect way to greet the season. 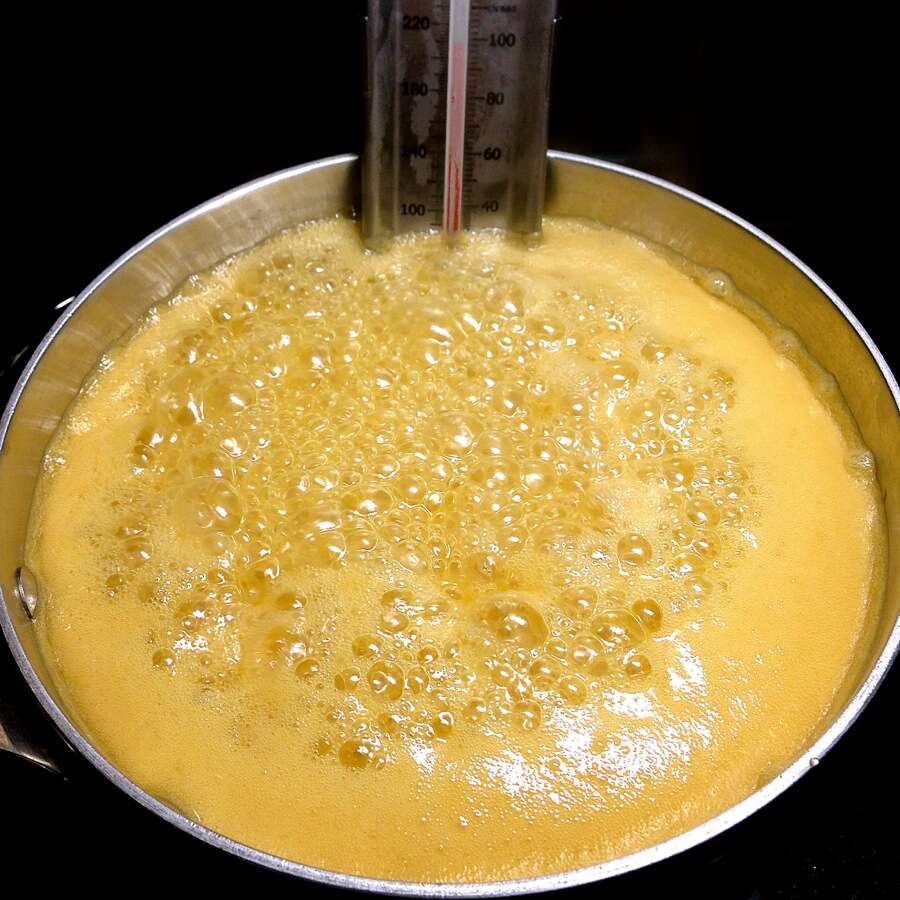 The first thing you're going to do is make the sauce – a rich, thick, creamy variation on caramel, featuring boiled cider.

Check out our recipe for Apple Cider Caramels; you'll find the sauce variation under "baker's tips."

Hint: Use a deep enough pan! The caramel mixture needs to boil for 8 to 10 minutes or so, and it'll rise up the side of the pan quite precipitously. I lucked out with this pan – the caramel came to within about 1/2" of the top, then settled back again. Dodged that sticky bullet! 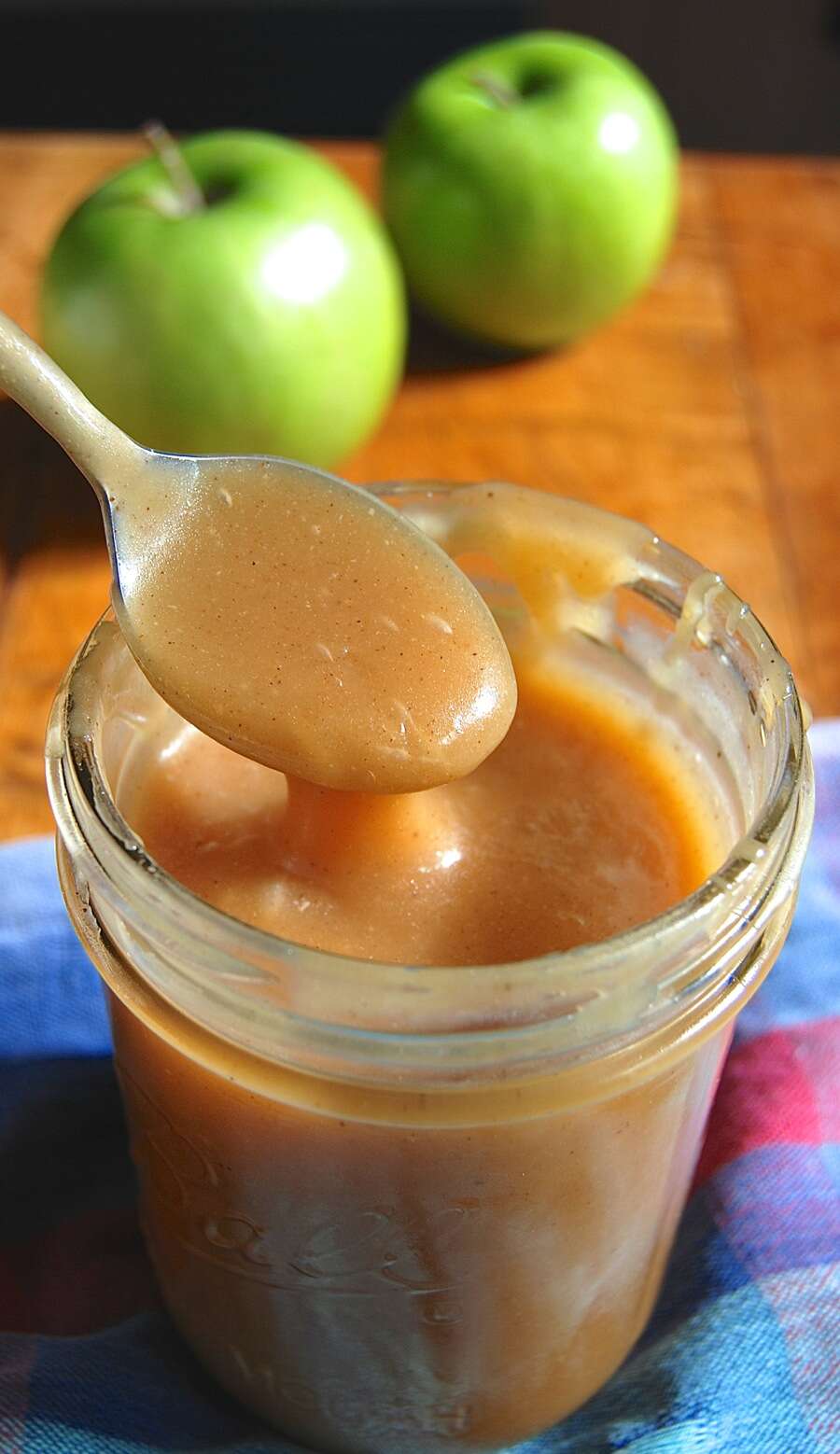 And here's the sauce, ready for its starring role atop the profiteroles. 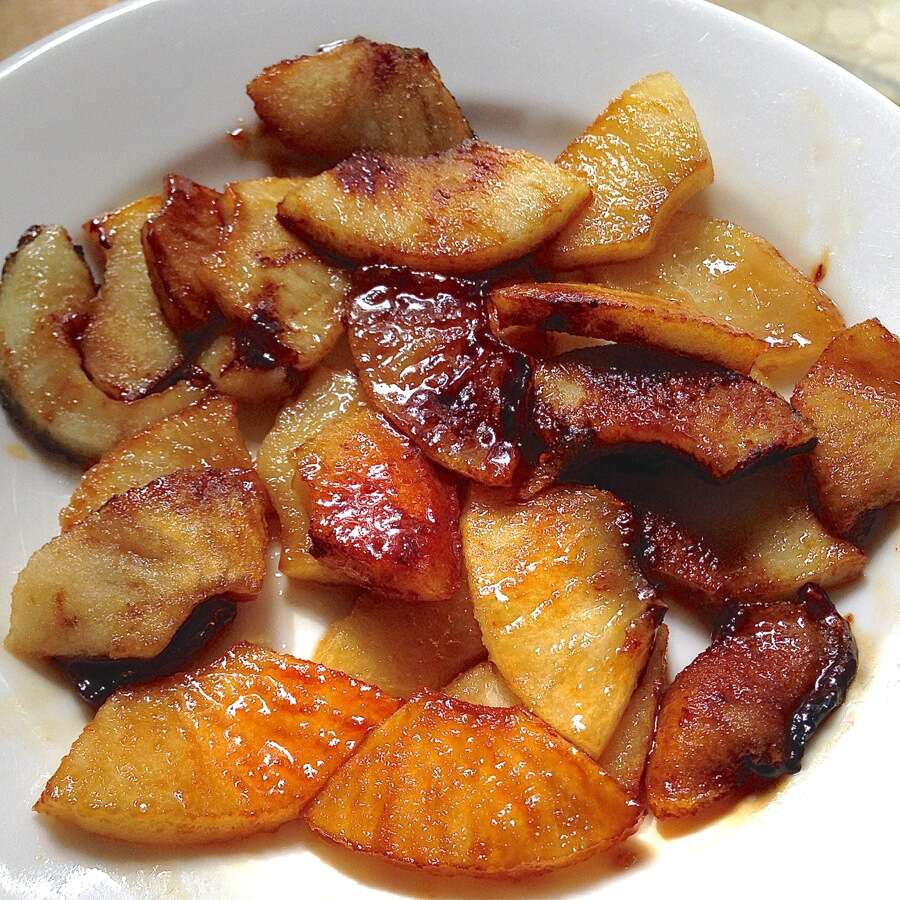 Next, get your filling ready. For every two profiteroles you want to serve, core, peel, and slice 1 large apple. Sauté the apple slices in enough butter to cover the bottom of the pan, and brown sugar/cinnamon to taste. A touch of boiled cider isn't amiss, either.

When I did this, I used 1 tablespoon butter, 2 tablespoons brown sugar, 2 teaspoons boiled cider, and a pinch of cinnamon for each apple. 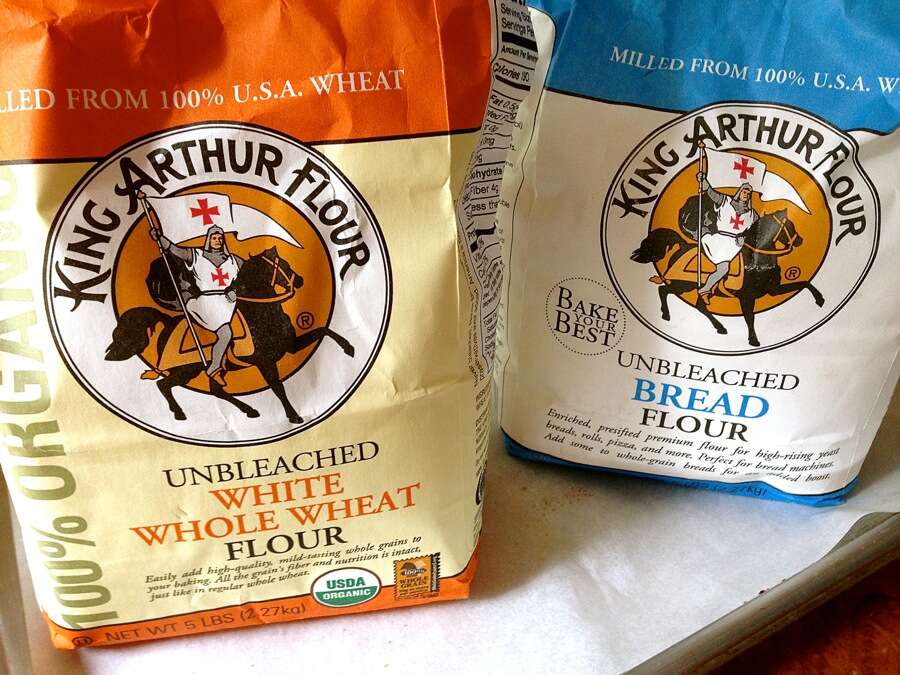 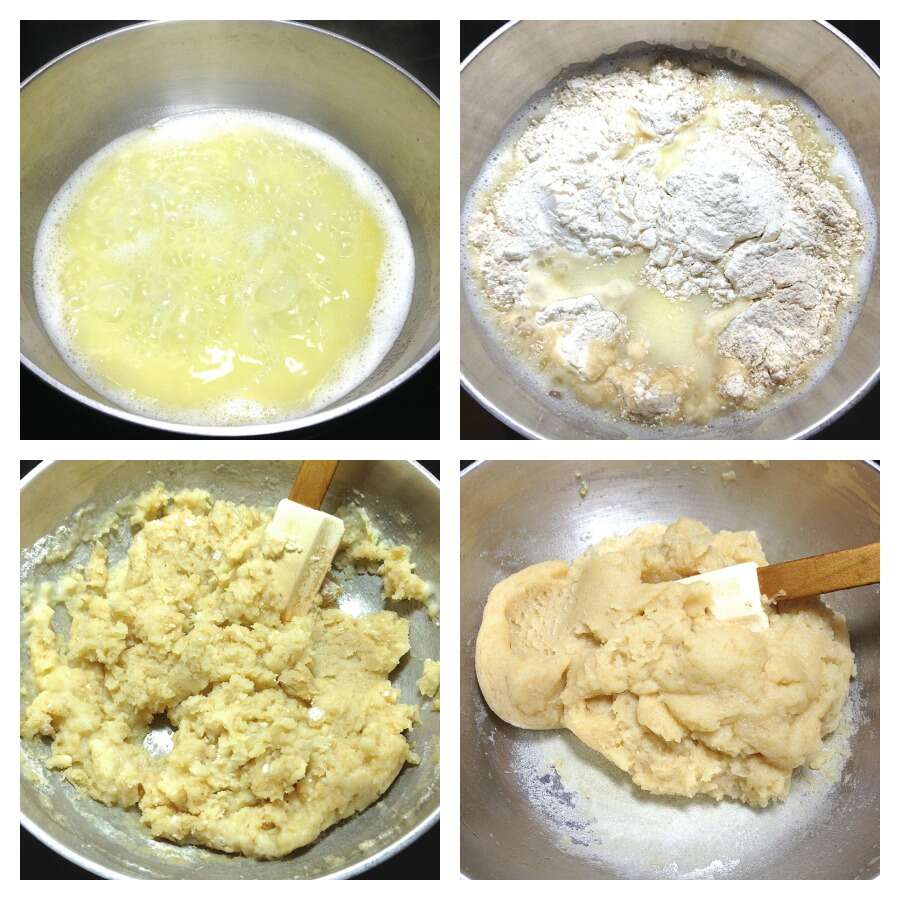 Place the following in a saucepan:

Bring the mixture to a boil over medium-high heat. Remove from the heat and add the flours all at once. Stir vigorously until well combined. Return to the heat  and cook, stirring constantly, until the dough forms a rough ball, about 15 to 30 seconds.

Remove the pan from the heat and transfer the contents to a mixing bowl. Let the mixture cool for 5 to 10 minutes, or until a thermometer inserted into the center reads 140°F. You can speed the process along by stirring or gently beating the pastry for a minute or so. 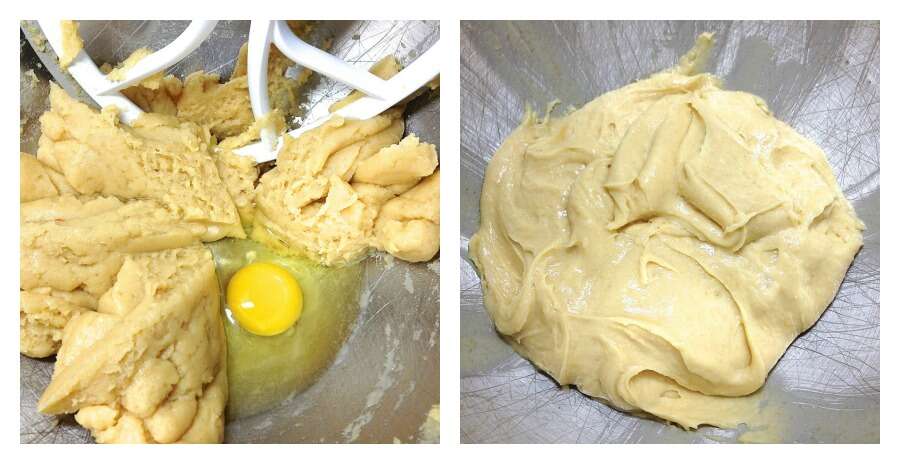 Beat in 4 large eggs, one at a time. The first egg should be fully incorporated before the second is added. The mixture will seems slippery at first, but will smooth out as more eggs are added.

Beat for 2 minutes after adding the last egg. 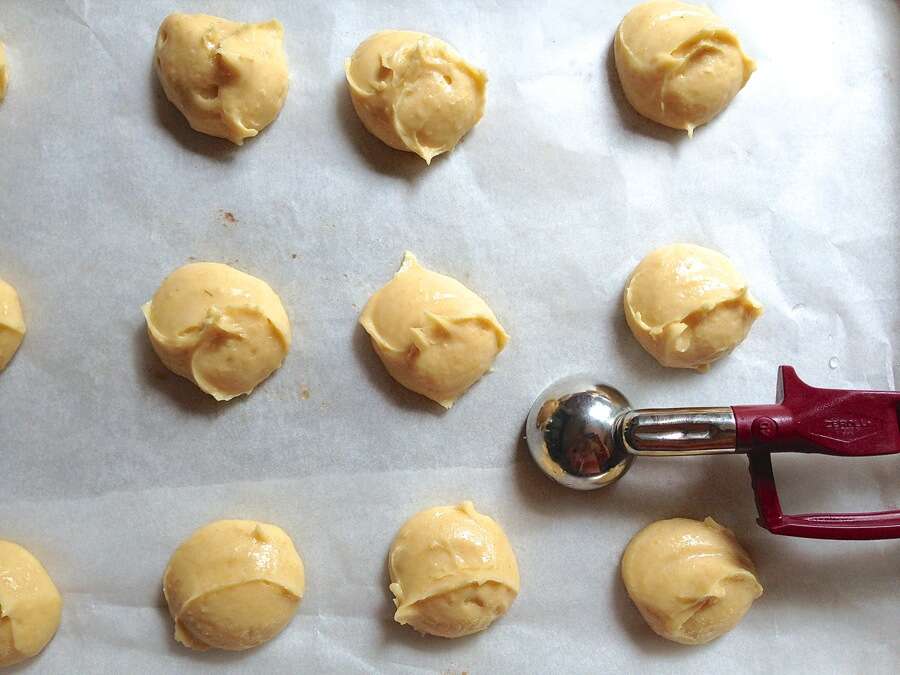 Drop the dough by heaping tablespoons or use a tablespoon scoop onto the prepared baking sheet; a tablespoon cookie scoop works well here. The mounds of dough will be approximately golf-ball sized. Leave a couple of inches between the balls of dough, as they'll expand quite a bit in the oven. 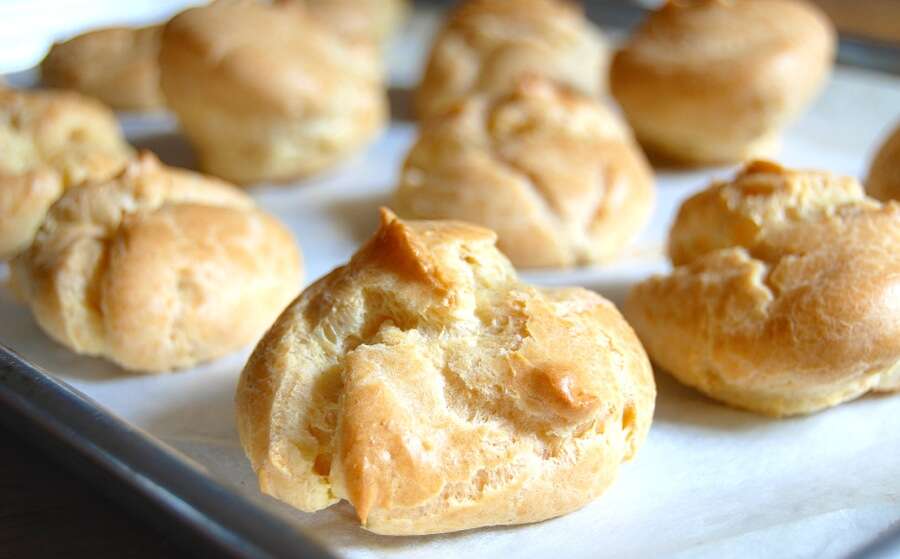 Bake the puffs for 8 minutes at 425°F. Don't open the oven door during the bake. After 8 minutes, reduce the oven temperature to 375°, and bake for an additional 10 to 12 minutes, or until the puffs are golden brown.

Remove the puffs from the oven and, using a sharp paring knife, make a small slice near the top of each, to let the steam out. Return the puffs to the oven.

Turn the oven off, prop the oven door open slightly, and let the puffs cool inside for 30 minutes. Transfer to a rack to cool completely.

At last! We're ready to make those profiteroles.

For each serving, slice a puff shell horizontally. Layer it with some of the sautéed apples, then a scoop of ice cream. I'm using simple vanilla here, but feel free to come up with your own apple-friendly pairing. 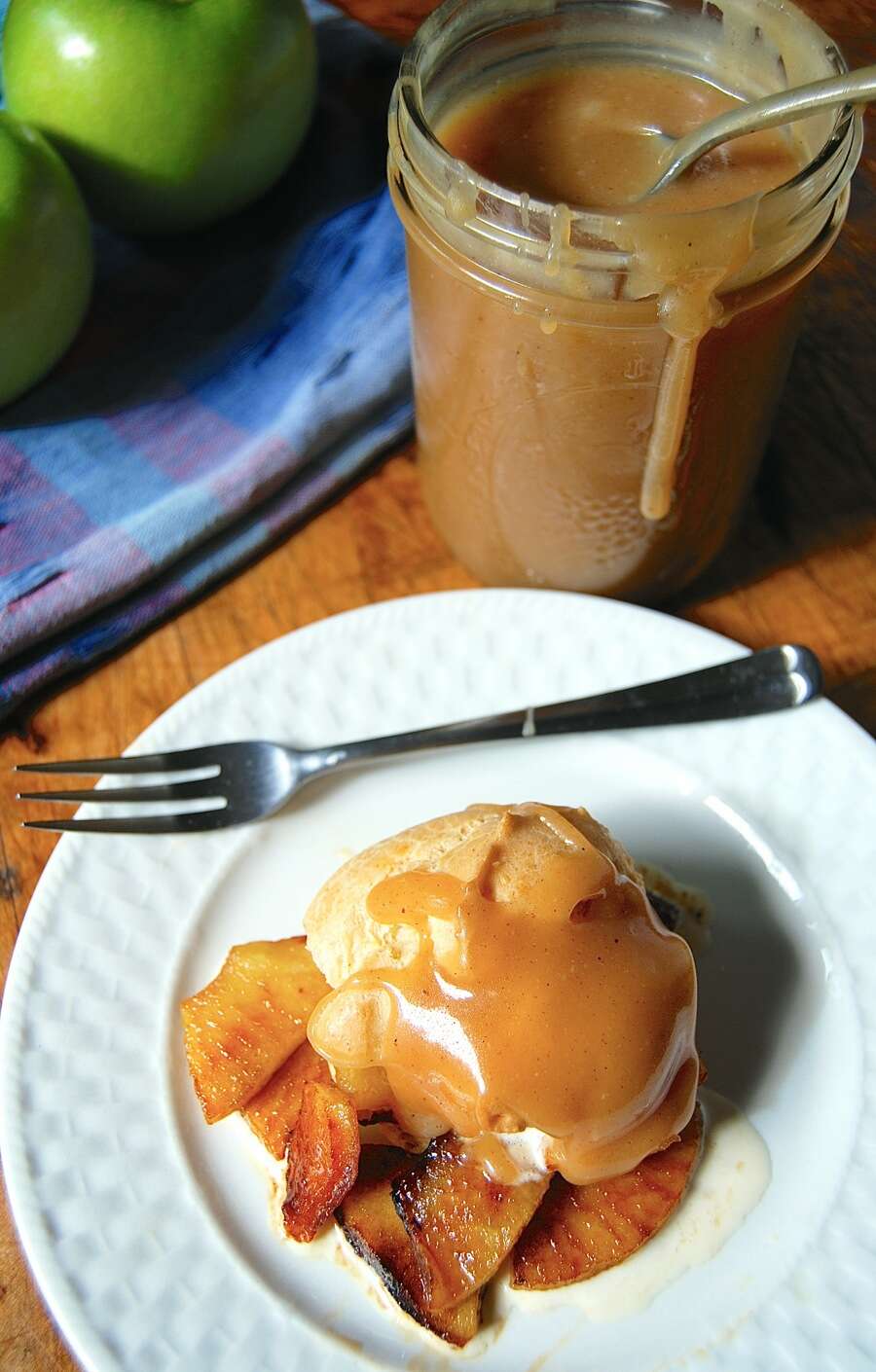 Put the shell's top back on. Heat the sauce until it's just pourable, and drizzle it over the filled shell. Sprinkle sparingly with sea salt.

Can you say profiterole?

There's no recipe on our site for these profiteroles, but if you simply make Pâte à Choux and the sauce version of Apple Cider Caramels, you're there. Enjoy!

Can this sauce be canned? I'd love to be able to share it with friends.
Chris, I don't know; I'm not a canner, but the Ball company has a reader Q & A service, and I'll bet they'd know. Good luck - PJH
These look fabulous! can't wait to make them. How do you think they would work with large group like 25? Can anything be done ahead?
Wow! I REALLY envy you non-celiacs on days that KAF sends these photos and recipes! Oh well, I probably don't need the calories, anyway. :-(
Oooohhhhh PJ.....I thought the caramels were killing me...These have dug my grave...teehee.....Will be making these sometime over the holiday season!!!
Yes, but what a way to go! Barb@KAF
Profiteroles are a great treat that is deceptively simple. Bring them to a party and let people ooh and ahh while they assume you labored in the kitchen for hours over such delicate pastries! Fill them with something sweet, or savory, it all works! Pâte à choux dough is a lot of fun to make as well, perfect for a baker that wants a change from making cookies and brownies. I like this "whole wheat" version of it and now I'm dreaming of what to use as a filling!
Glad you like this version of profiteroles! They do make an entrance at a party, don't they? Barb@KAF
Evil person! I think I gained 5 pounds just from reading the story and drooling over the photos. (What's the best way to clean drool off of my ipad?). Seriously: Are atmospheric conditions a factor when baking the shells? At this time of year we can have 13% relative humidity one day and 95% the next. Thanks!
Hi Tom- I think you should be just fine regardless of the weather. You may find your batter a little drier which would cause a touch more cracking in your profiteroles on the less humid days, but it should still work just fine for you. And I completely agree with your reaction to these delectable photos...I'm lucky I'm working all day or I would probably be whipping a batch of these up right now! Hope you enjoy them (although how could you not!) and happy baking! Jocelyn@KAF