A simple trick for pretty pie

LOOK at this pie!

And an all-star top crust!

I've said it before, and no doubt I'll say it many, many times again – I'm no Martha Stewart.

When it comes to pretty – I'm pretty bad. My cookies are lumpy, not round. My scones oblong, not the perfectly buttoned-down wedges you see at English tea rooms.

The top crust of my yeast breads pucker. My pizza isn't round; it's Australia. 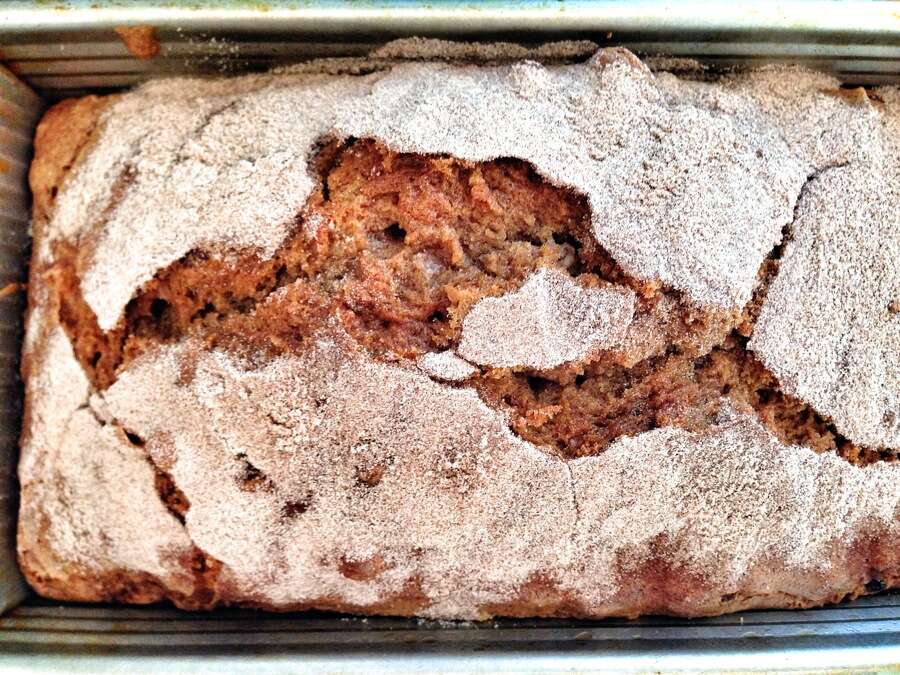 Birthday cakes? Don't even go there; when I finally get around to taking their sorry pictures, you'll find them on NAILED It! 20 Hilarious Pinterest Baking Fails. 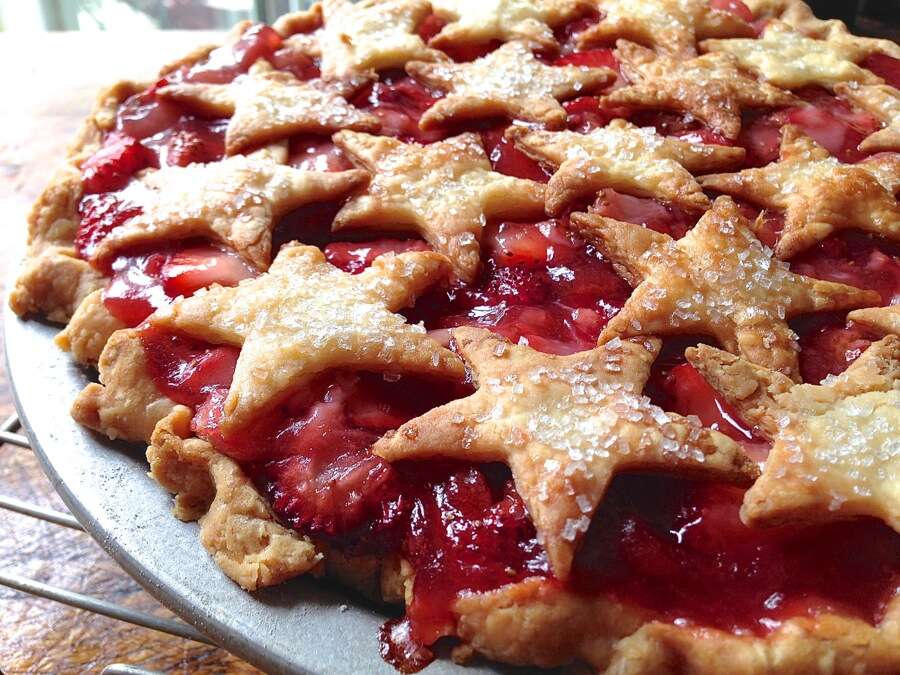 So it was with great astonishment I pulled a strawberry pie out of the oven the other day, and pronounced it – dare I utter the words? – "pretty good looking."

NOT picture perfect, of course. And by that I mean, this pie would never in a million years show its face in our Baker's Catalogue, bastion of brilliantly beautiful baked goods.

But pour moi? Well, as I said, pretty astonishing.

Maybe part of my success with this pie is tied to my shortcomings: I have no fail-safe methods for producing handsome baked goods.

There was never a grandma lovingly holding my hand as I wove a lattice crust. No seasoned cake decorator standing at my elbow as I struggled with the pastry bag. So I'm willing to veer from a recipe and try anything.

We'll complete that thought shortly, but for now, let's start at the bottom. Or better, in the middle: with the filling.

Inspired by FRESH strawberries, I made a straight up strawberry pie. ’Tis the season. Here in New England, strawberries from California supplanted those from Florida a few weeks ago. My own strawberry plants have blossoms, but they're weeks from producing fruit. So for now, I'm harvesting strawberries from the produce section of the supermarket.

This technique will work with any fruit pie: Strawberry-Rhubarb Pie, in particular, would be fantastic.

OK, on to the crust. I'm making a Classic Double Pie Crust, using a combination of shortening and butter.

Why not an all-butter crust? 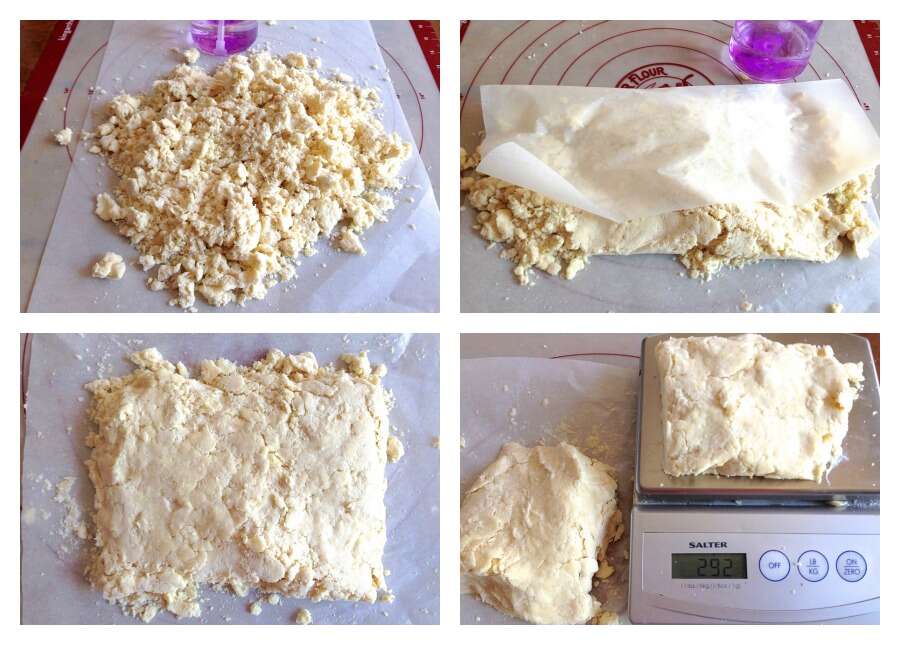 My fellow test baker Susan Reid showed me a cool way to make pastry, key to which is dumping the dry-ish flour/fat/water mixture onto a piece of parchment, misting it with a spray bottle, then using the parchment to fold it a few times. This creates lovely layers of fat and flour that translate to flaky crust – all without adding too much water, liquid being the enemy of flakiness.

You can find more information on this in the "tips" section of the recipe, as well as in the recipe's accompanying video.

Once you've put your crust together, divide it in half; a scale makes short and accurate work of this task. Flatten each half into a roundish disk, slip into a plastic or waxed paper bag, and refrigerate for 30 minutes. 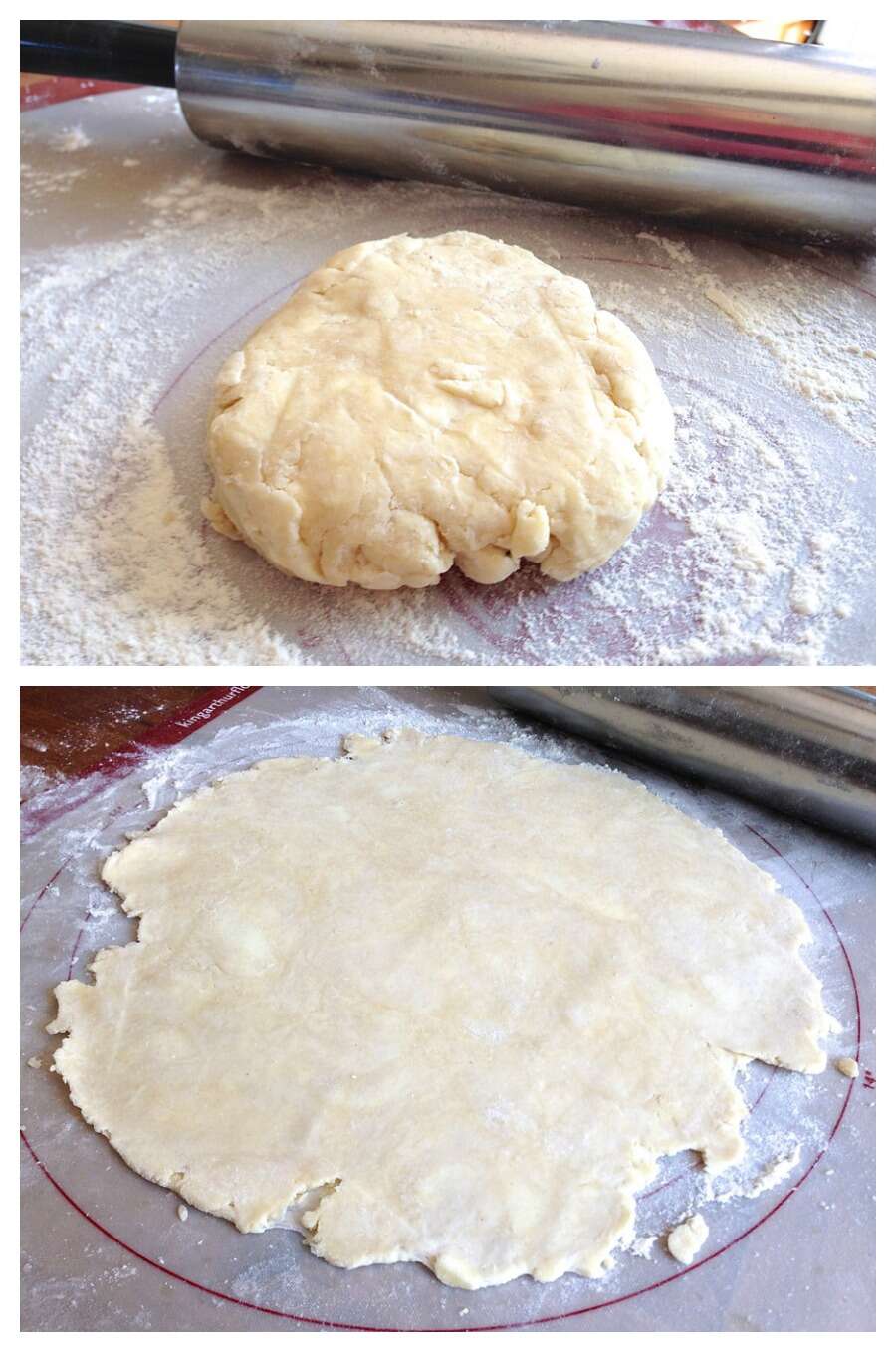 OK, the crust has been chilling in the fridge for 30 minutes; this both helps ensure flakiness, and makes it easier to roll. 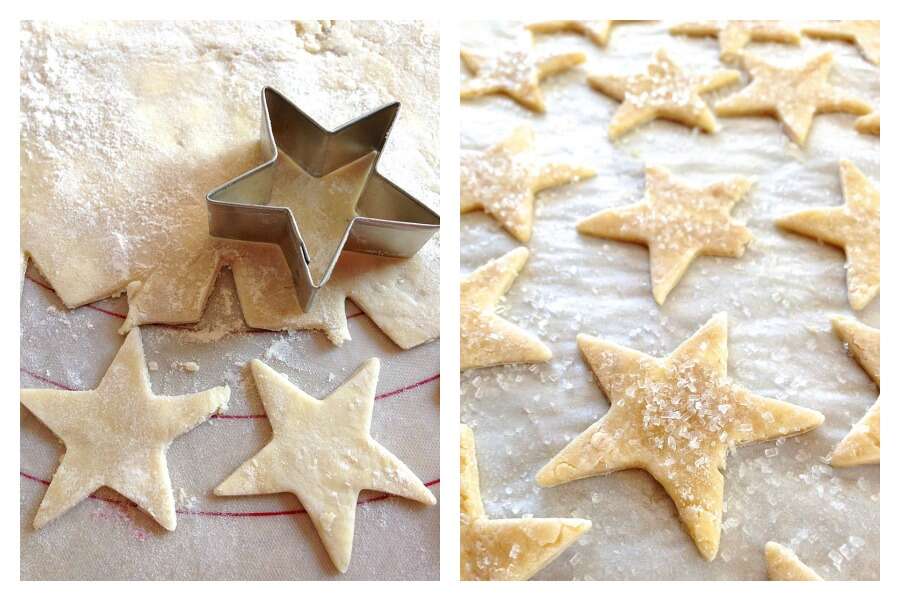 Instead of a plain top crust, I'm going to cover the filling with stars.

Which is why I've chosen a shortening/butter crust: all-butter stars, tasty as they are, tend to puff and sag, due to butter's low melting point. Shortening helps them keep their sharp shape.

OK, if you want to make every last bit of dough into a star, be my guest. I'd rather just lay the scraps on a baking sheet, sprinkle them with cinnamon-sugar, bake them alongside the stars, and enjoy them with coffee. Taste over appearance, that's my default.

I lay the stars on a parchment-lined baking sheet, spritz them with water, and sprinkle with sparkling sugar. The sugar adds both flavor and crunch.

Plus, in a certain light, the stars actually glitter... Hear that, Martha? 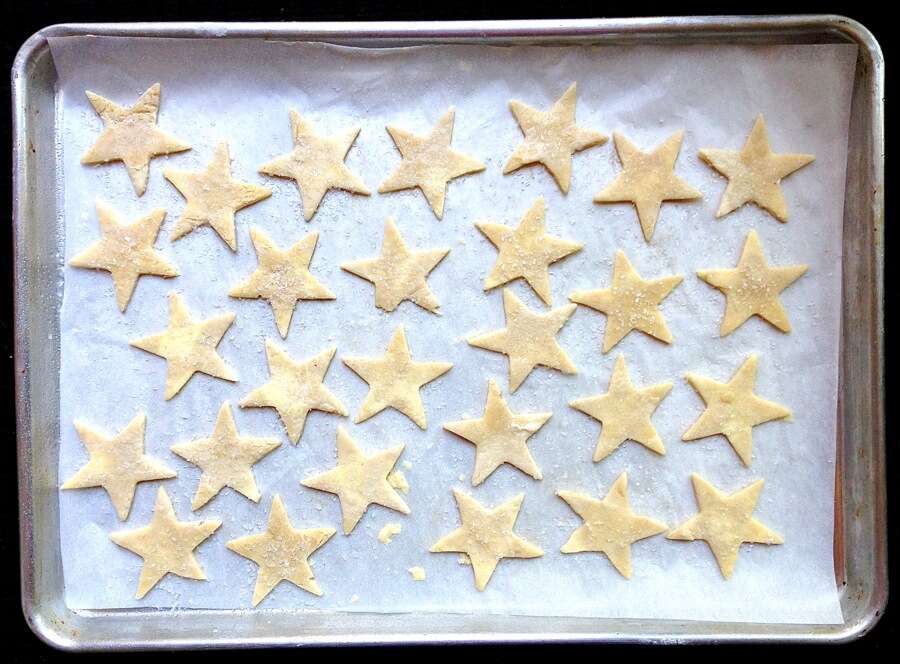 Hold on, now – why aren't the stars going on top of the pie?

Because I've never understood baking a cutout crust on top of the filling, where those cute little cutouts – stars, hearts, pumpkins, what have you – can easily become submerged in a sea of bubbling juice. When the filling cools and recedes, you're left with sticky-looking stars. Or muddied and mottled hearts. 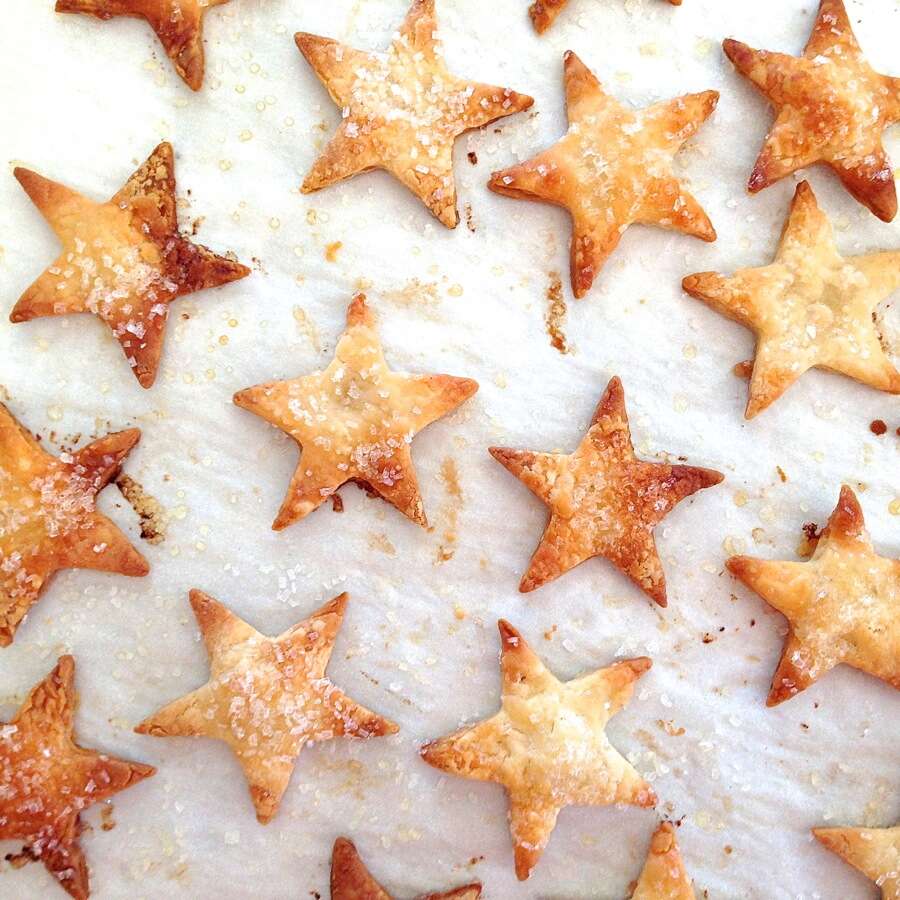 Why not bake the cutouts first, then apply them once the pie's out of the oven?

Cast off the bonds of convention! As Ralph Waldo Emerson memorably said, "A foolish consistency is the hobgoblin of little minds."

Next up: bottom crust and filling. 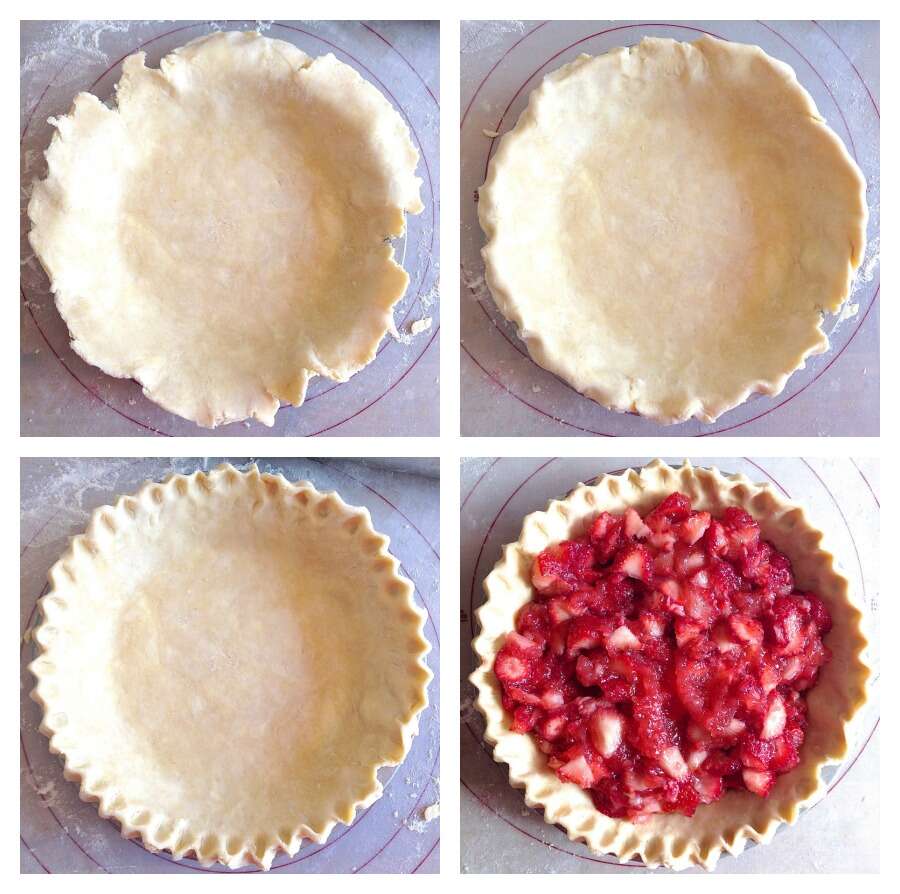 I roll the bottom crust int a 12" circle. Lay it in the pan, crimp the edges up (you want a tall, crimped edge, not the short kind where you use a fork to flatten the crust against the rim of the pan), and add the filling. 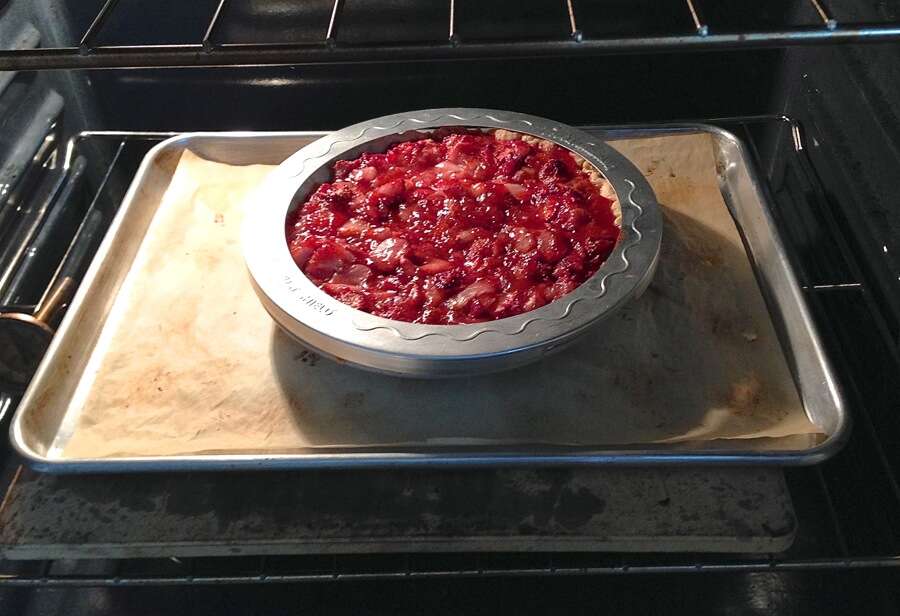 I bake the pie until it's done, adding a pie shield about 15 minutes before the pie's due to come out of the oven. This protects the crust from over-browning. 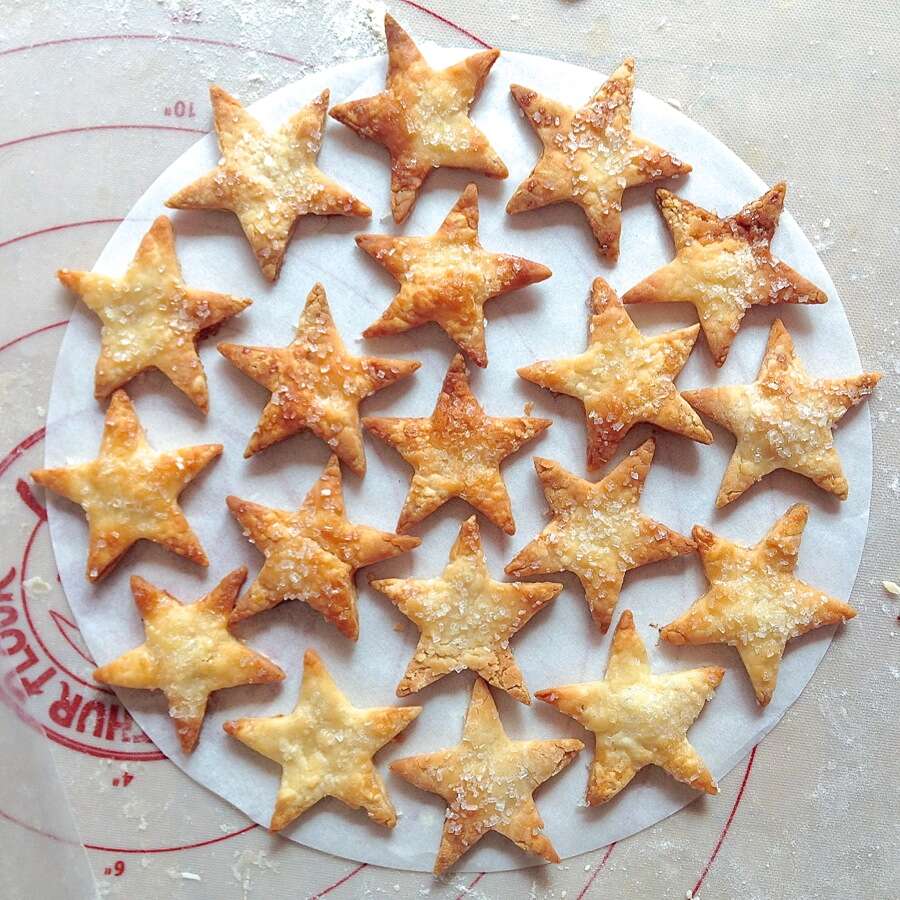 While the pie is baking, I take the time to arrange my baked stars on a 9" parchment round.

Why? Because I want them to look picture-perfect atop my pie. Once the pie's out of the oven, I won't have a lot of time for fussing and rearranging; I want the stars to settle into the filling a bit as it cools. The 9" parchment, which mimics the real estate on top of the pie, lets me work out any placement issues ahead of time. 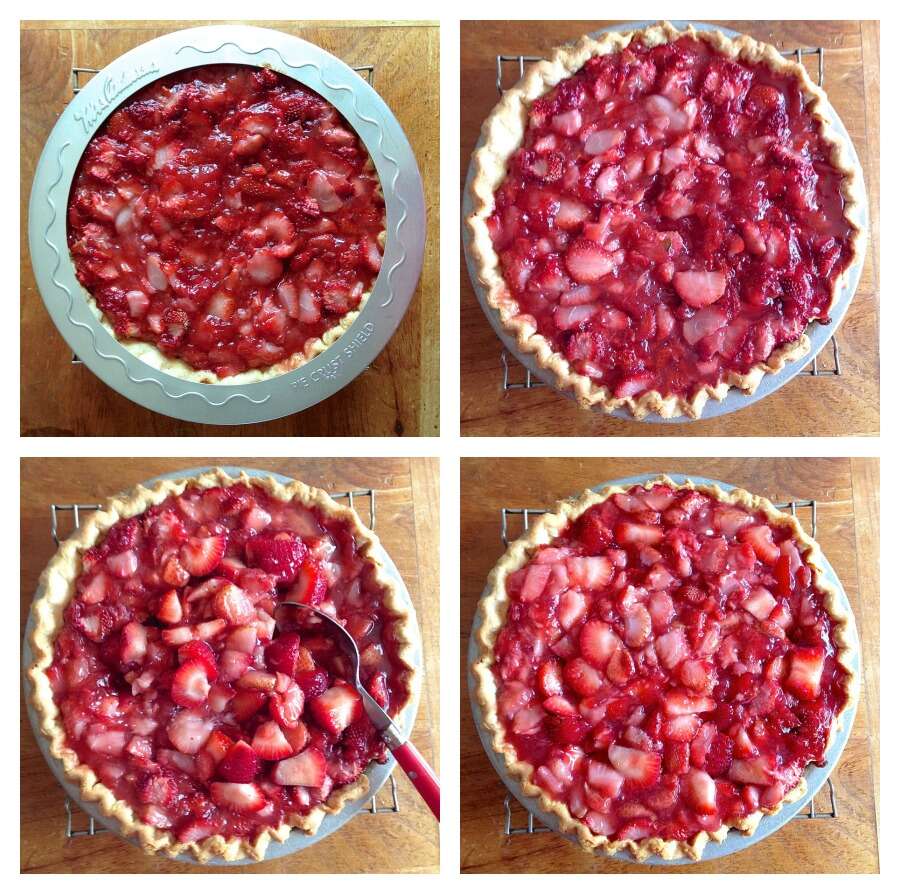 I take the pie out of the oven, place it on a heatproof surface, and remove the shield.

Actually, I'm stirring something INTO the filling: more strawberries. I think fresh strawberries added to cooked filling add nice "bite" and flavor, so I add about 12 ounces hulled and coarsely chopped fresh berries to the simmering filling. 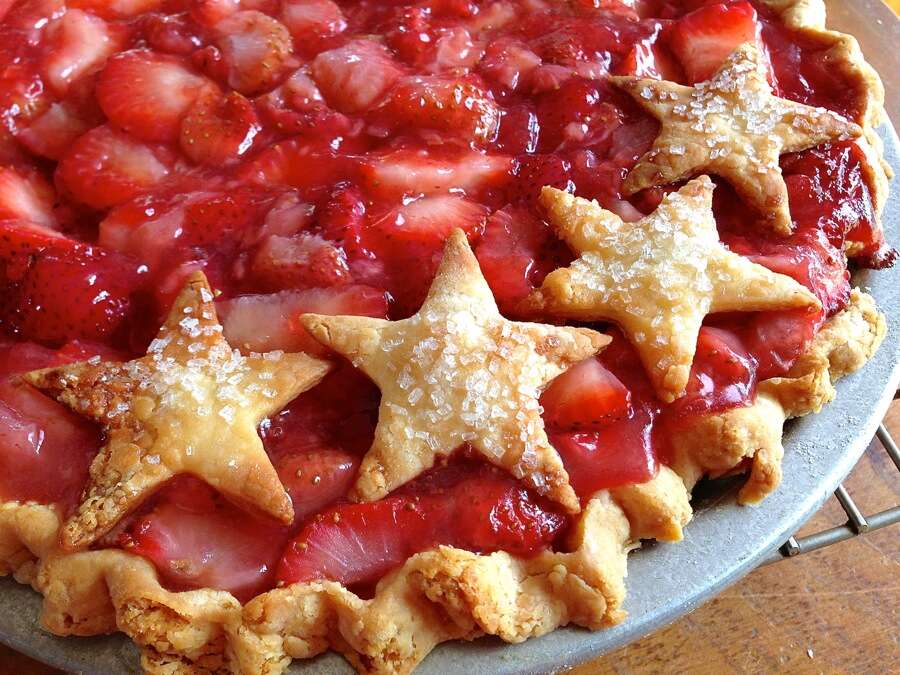 On go the stars. Doesn't that filling look nice with the fresh strawberries? 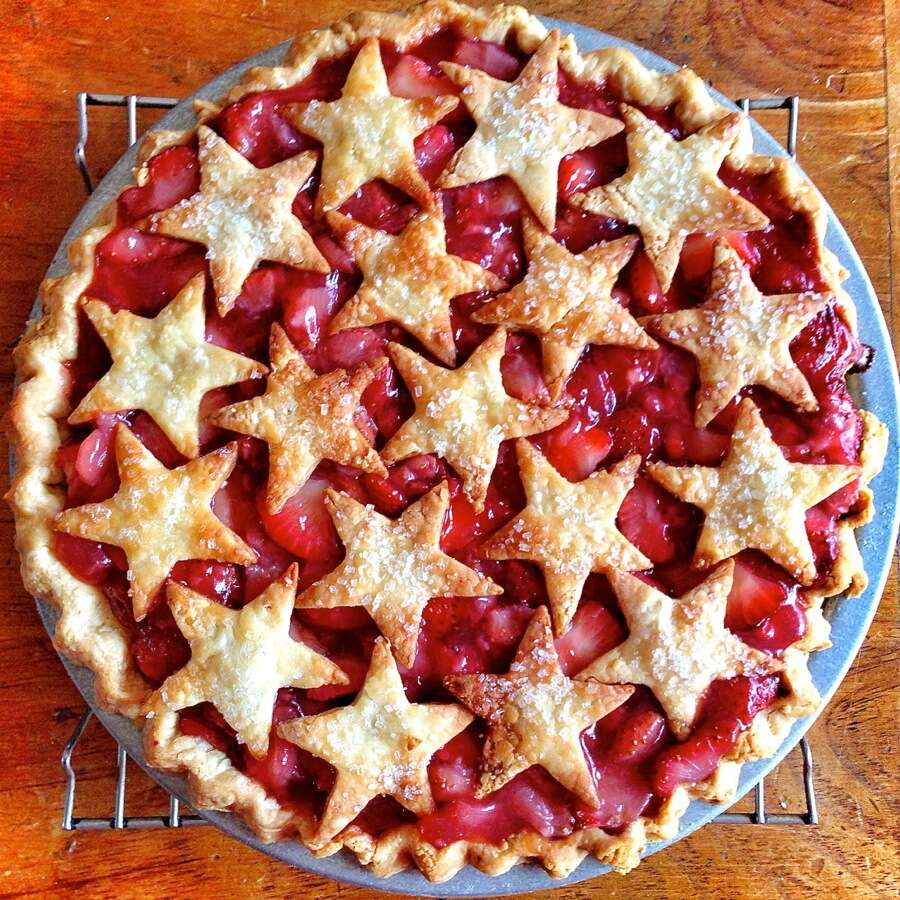 Well, kind of. The star placement didn't work out exactly as planned on the parchment. But the overall effect is nice, wouldn't you say?

Now, difficult as this is, you HAVE to let the pie cool completely before digging in.

Several hours pass. At last! We come to the really important part – 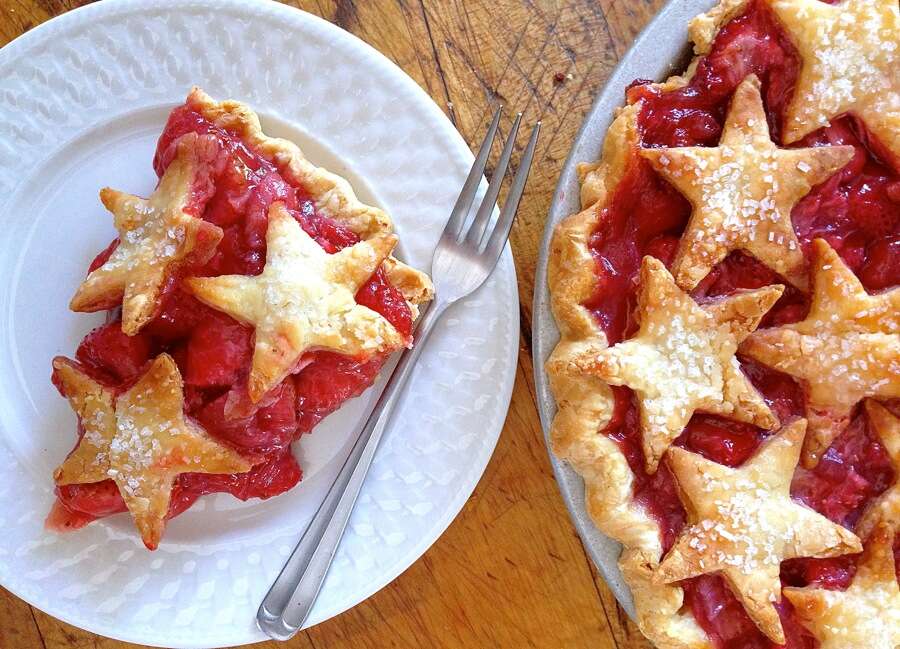 How does the pie taste? 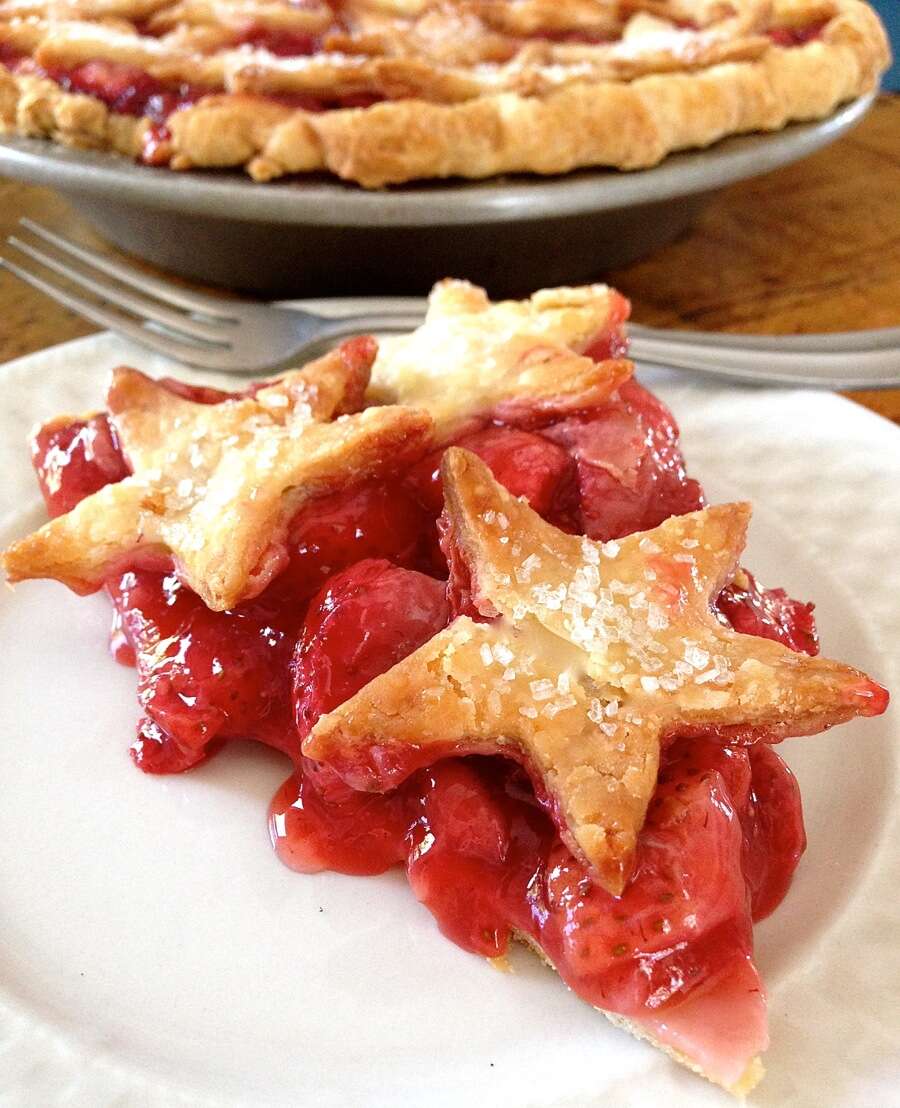 Just call me the artful codger!

Note: These techniques work well for all kinds of fruit pies. In particular, see Strawberry-Rhubarb Pie and Classic Double Pie Crust to get started.

Funny I should find the link to this page on FB the night AFTER I made a strawberry pie using a recipe from a generally reliable cooking magazine. It instructs you to cook 2 lb. of frozen strawberries down to 2 c. of strawberry "jam"; add lemon juice, gelatin, a little water & sugar, cook it all together, add 1 lb. of sliced fresh strawberries, put the mixture into a single crust, bake, then refrigerate 4+ hours. The consistency was perfect, the flavor good, but not great; not enough to warrant all the fuss. After last night's experiment, I think I'll wait until the local strawberries come in to try this version of the pie. I like the stars on top; might have to buy myself a star cookie cutter. :)
Maureen, I find star cutters endlessly useful - they feel like an all-purpose celebration. Cookies, pie crust, sometimes I even bake a pan of bars and cut out "star bars." I look forward to hearing about your FRESH berry pie! :) PJH
My strawberry plants don't even have flowers yet and I'm in southern NH! But our rhubarb is coming in quite nicely...so maybe a rhubarb pie is in the near future!
Carolyn, sounds like a plan! Barb@KAF
The pie looks BEAUTIFUL! Here's a recommendation about strawberries: you need the Oregon fresh berries in June when they are available for picking and purchasing. OOOH! Can't be beat! A pie made with them automatically becomes "the food of the Gods".
I love you. Please let me be your unpaid pie intern. Shoot, I live in California.
Just made this with strawberries and rhubarb. It looks delicious.
That pie is just beautiful. I love the stars and the hints but, I especially love your idea of adding fresh strawberries into the baked pie. Very clever. Please thank Susan Reid for the tip on making a pie crust. Now, on to find strawberries that actually taste like strawberries.
Vickie, I hope your local strawberry crop comes in soon. Nothing like sun-warmed berries, right from the vine... PJH
can you tell me what fat ratio you used for the crust? it looks like it held it's shape very nicely!