A better way to make bacon

Bakin' up the bacon

When you're frying a pound of bacon, do you stand over the stove, turner or tongs in hand, hot grease popping and splattering as you turn, wait, turn, wait, turn... wait? There's a better way: learn how to bake bacon, and you'll never go back to that frying pan again!

Celebratory breakfasts are one of the most enjoyable meals to prepare (during the holidays or anytime of year!) and can include fresh-baked sticky buns, stuffed French toast, and savory brunch casseroles of all kinds.

There's not much crisp, golden bacon doesn't go with. In fact, most breakfast dishes are improved by a rasher or two of bacon.

Which leads me to believe some of us will be frying bacon at least once this month. 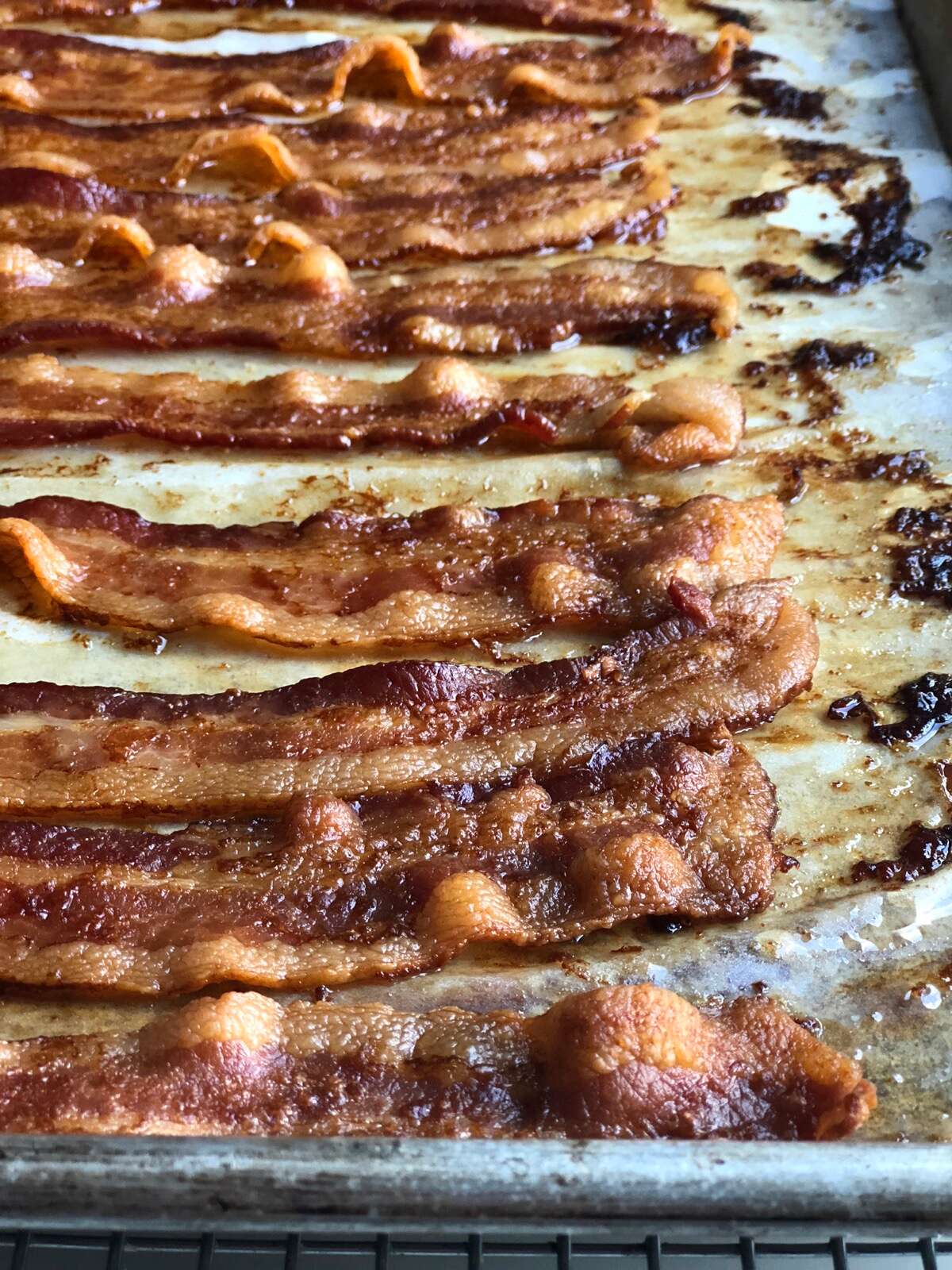 Change the word "frying" to "baking," and I'm with you.

That's right, baking. If you've never taken the opportunity to bake bacon, you're in for a revelatory experience.

Not only does learning to  bake bacon save you the hassle of babysitting (baconsitting?) as it fries; it's also a much cleaner experience; and yields perfectly cooked bacon: evenly brown, wonderfully flat, perfectly crisp and, of course, ridiculously tasty.

How much hands-on time and effort does it take you to fry a pound or two of bacon? Contrast that to baking bacon: about 5 minutes hands-on time, and zero effort. Bonus: all the bacon gets done at the same time, hot, sizzling, and ready to serve with the oven-warm cinnamon buns.

Convinced? Give it a try. Trust me, you'll never go back to pan-frying bacon again.

How to bake bacon 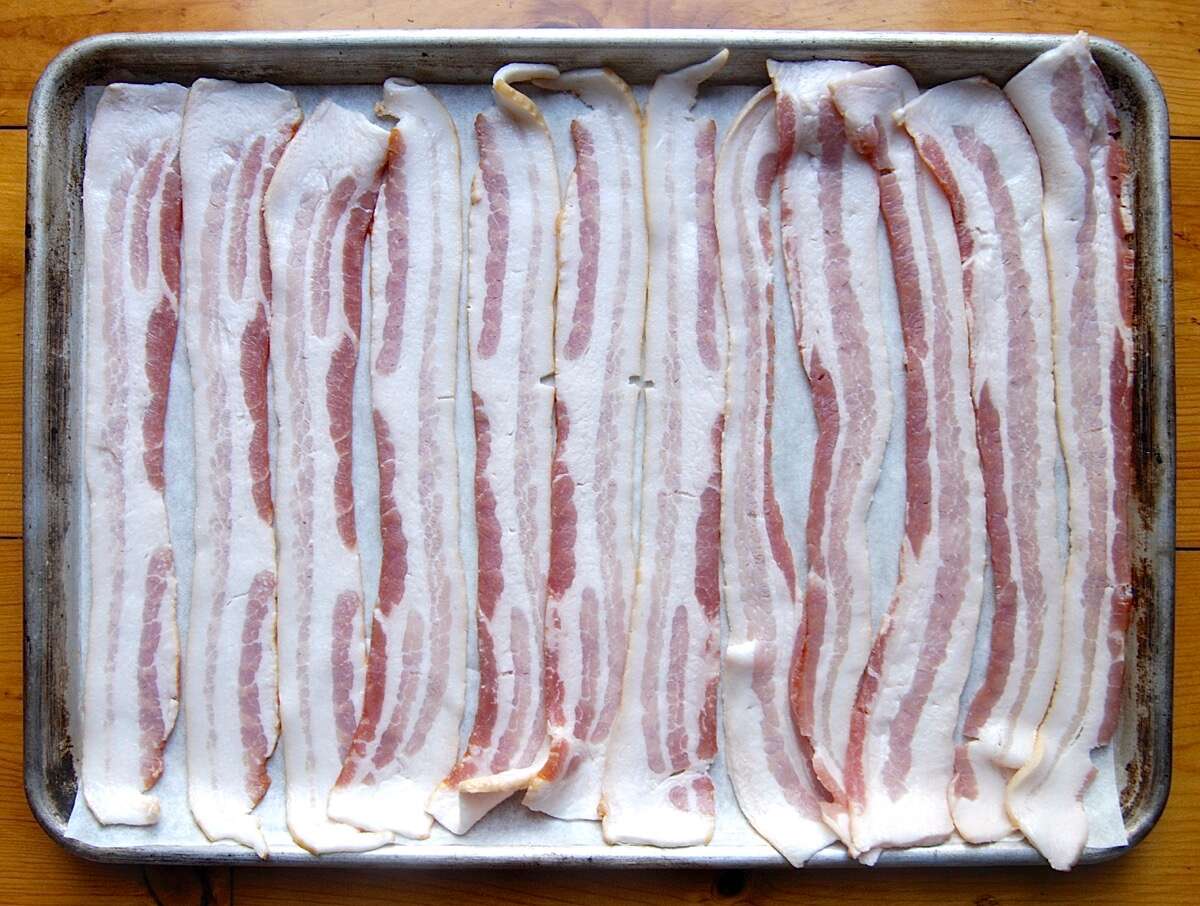 Line a large, rimmed baking sheet with parchment. Lay up to a pound of bacon atop the parchment. Most packaged bacon comes 16 slices to the pound, and will fit on a half-sheet pan (18" x 13"), with a bit of overlap. 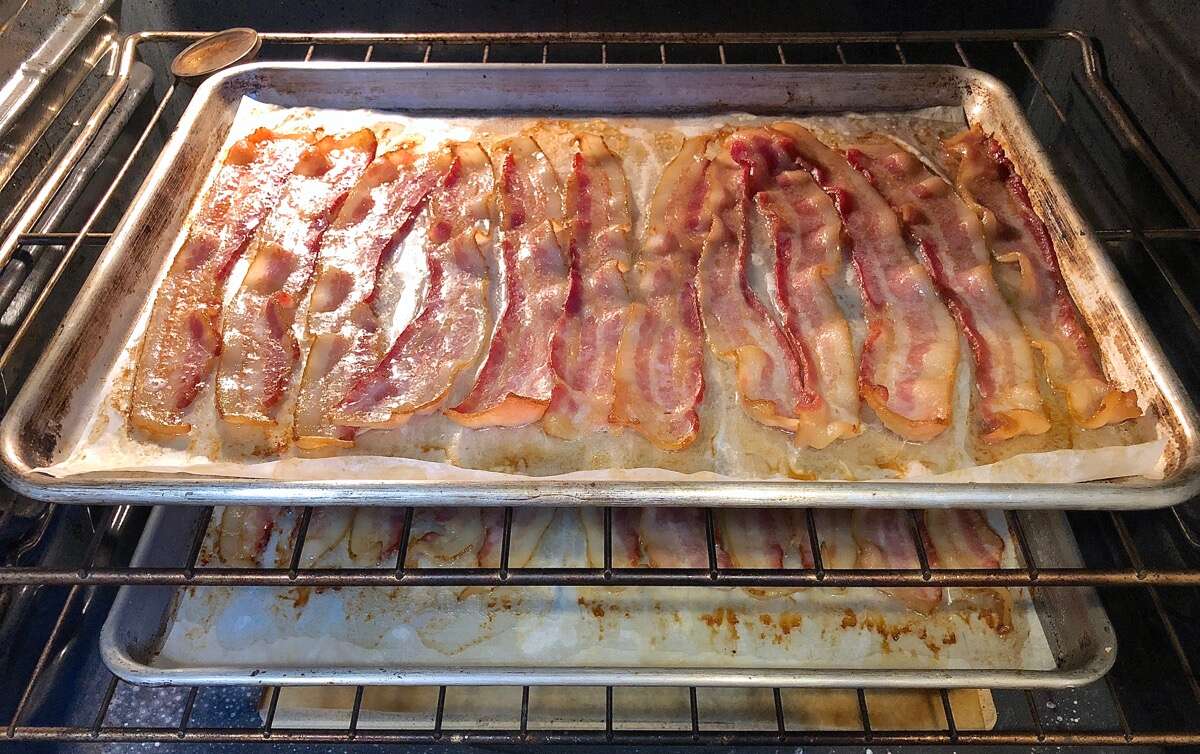 Bake the bacon for about 25 minutes, or until it's started to shrink. 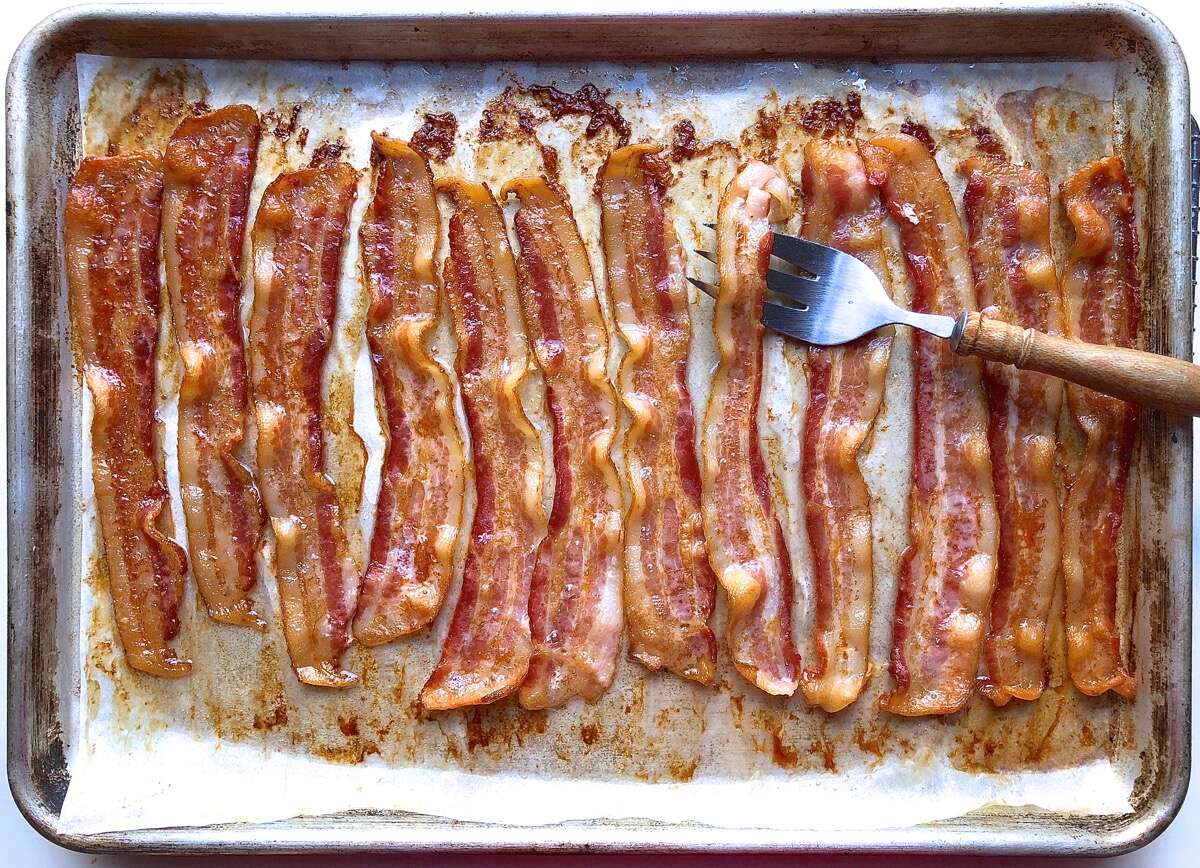 Separate the pieces where they've overlapped, and continue to bake until it's as dark and crisp as you like, anywhere from an additional 5 to 15 minutes.

Remove the bacon from the oven. 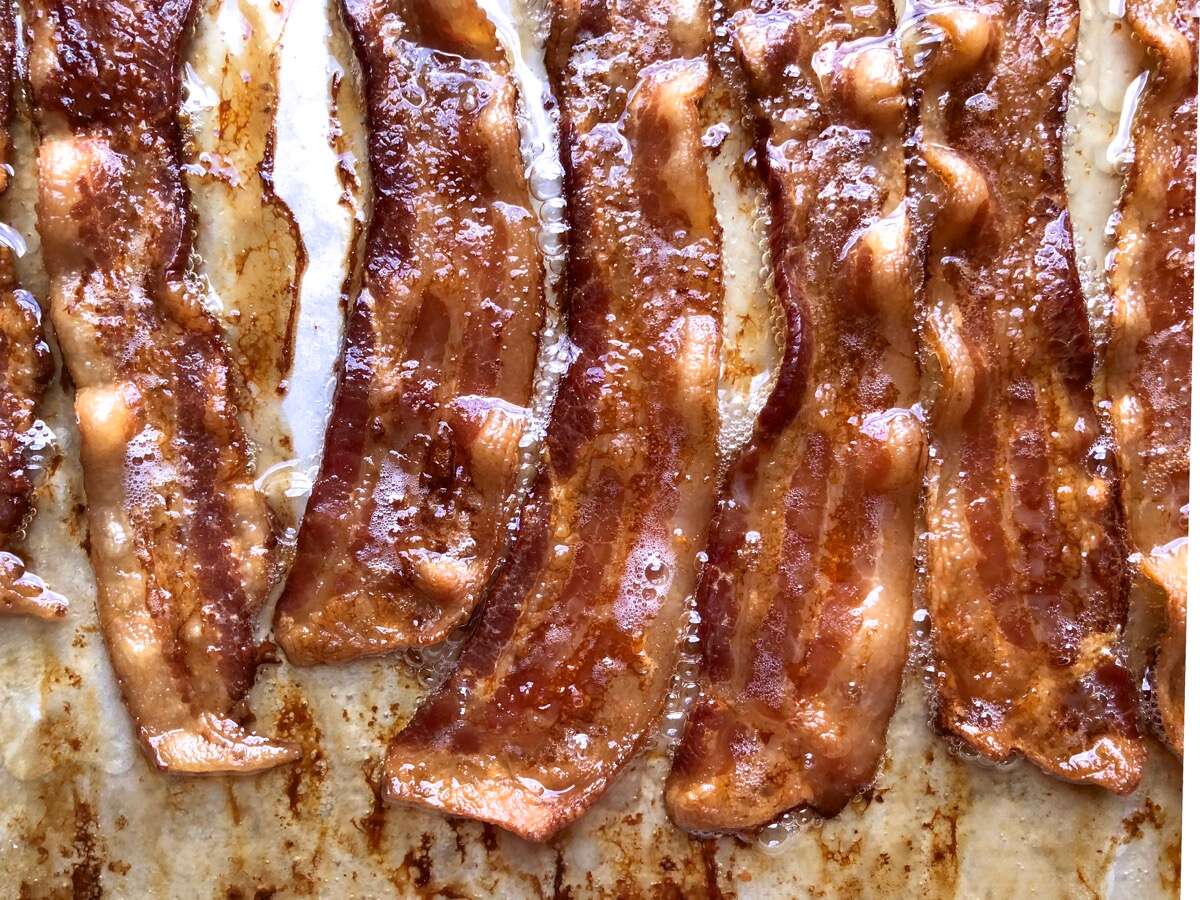 This bacon baked for 40 minutes total. Can you hear it sizzling? 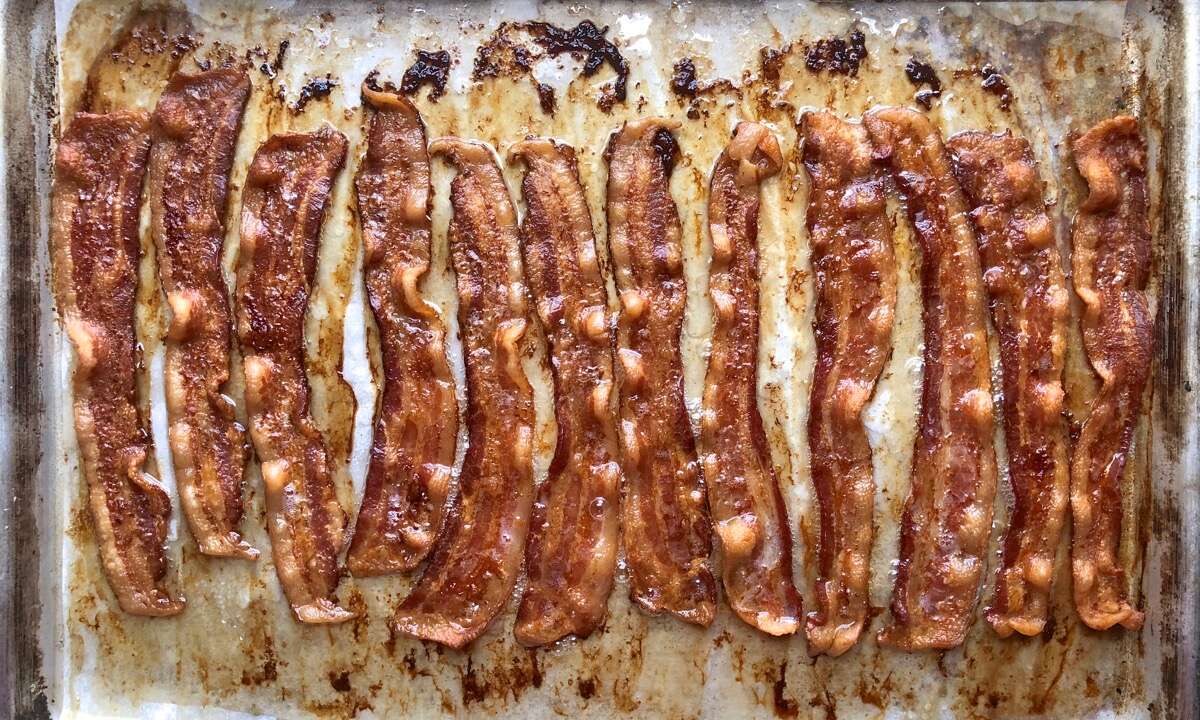 Notice how flat it stays as it bakes; no curled, twisted, gnarly pieces. 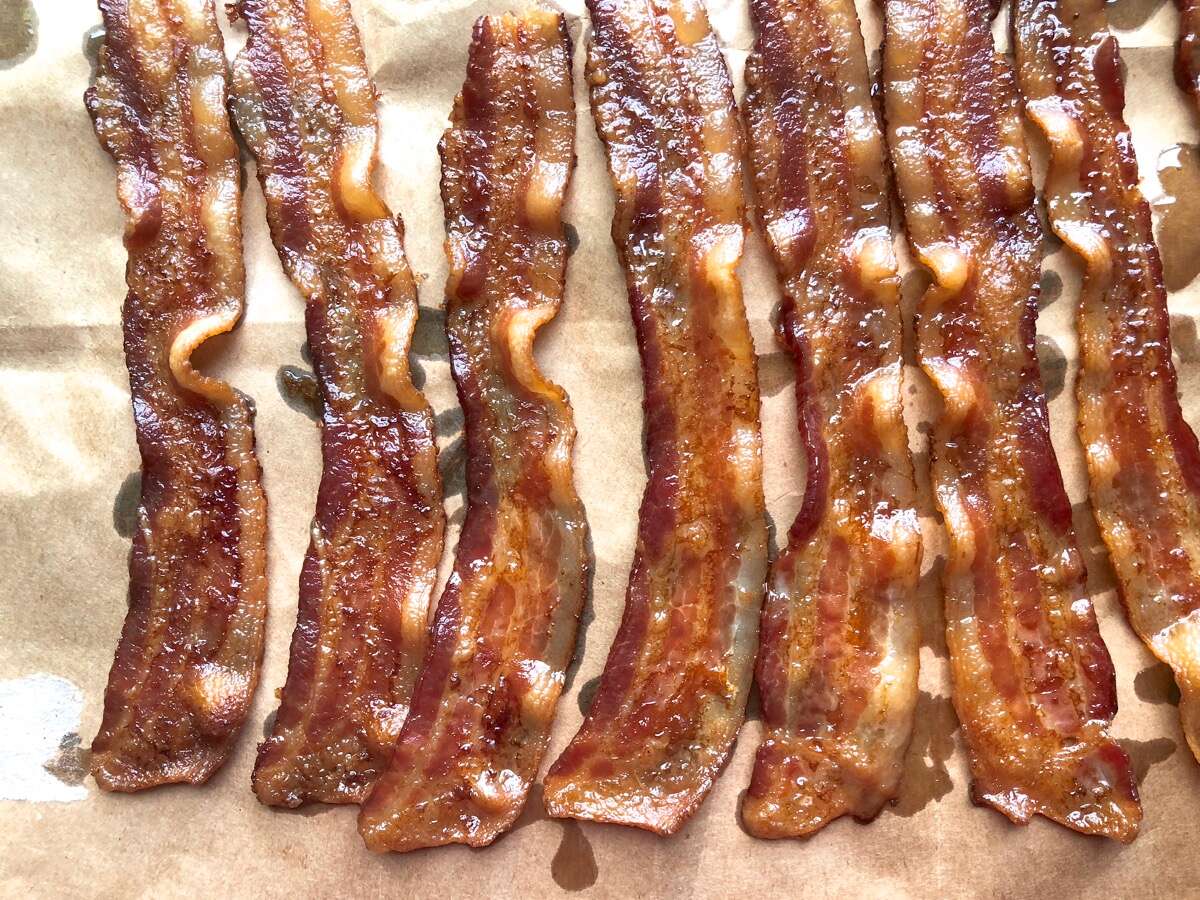 Transfer the bacon to a flat brown paper bag or a paper towel-lined plate to drain. Serve with the rest of your breakfast. I highly recommend baked Praline French Toast, for you sweet-salty aficionados. 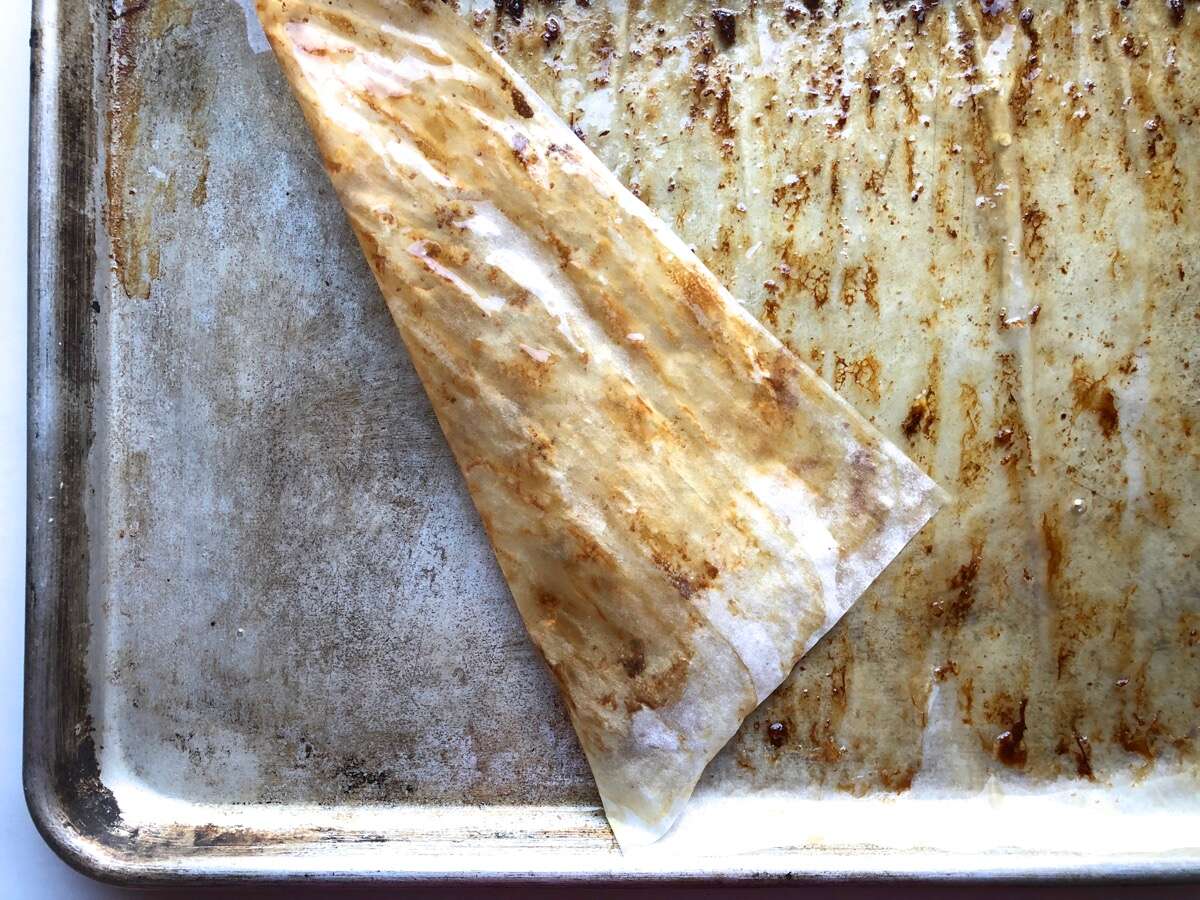 When you bake bacon, cleanup is easy

This is why you use parchment: it keeps your pan clean. (BTW, those stains on the pan aren't from the bacon; they're permanent.)

Simply fold up the parchment with the rendered bacon fat, and discard it. If you want to keep the fat, drain it off the pan into a heatproof jar or other container.

Any fat left on the pan, swipe it off with a paper towel. Then rinse your pan in hot, soapy water. No scrubbing a frying pan; no cleaning messy grease spatters off the stovetop and surrounding counter. 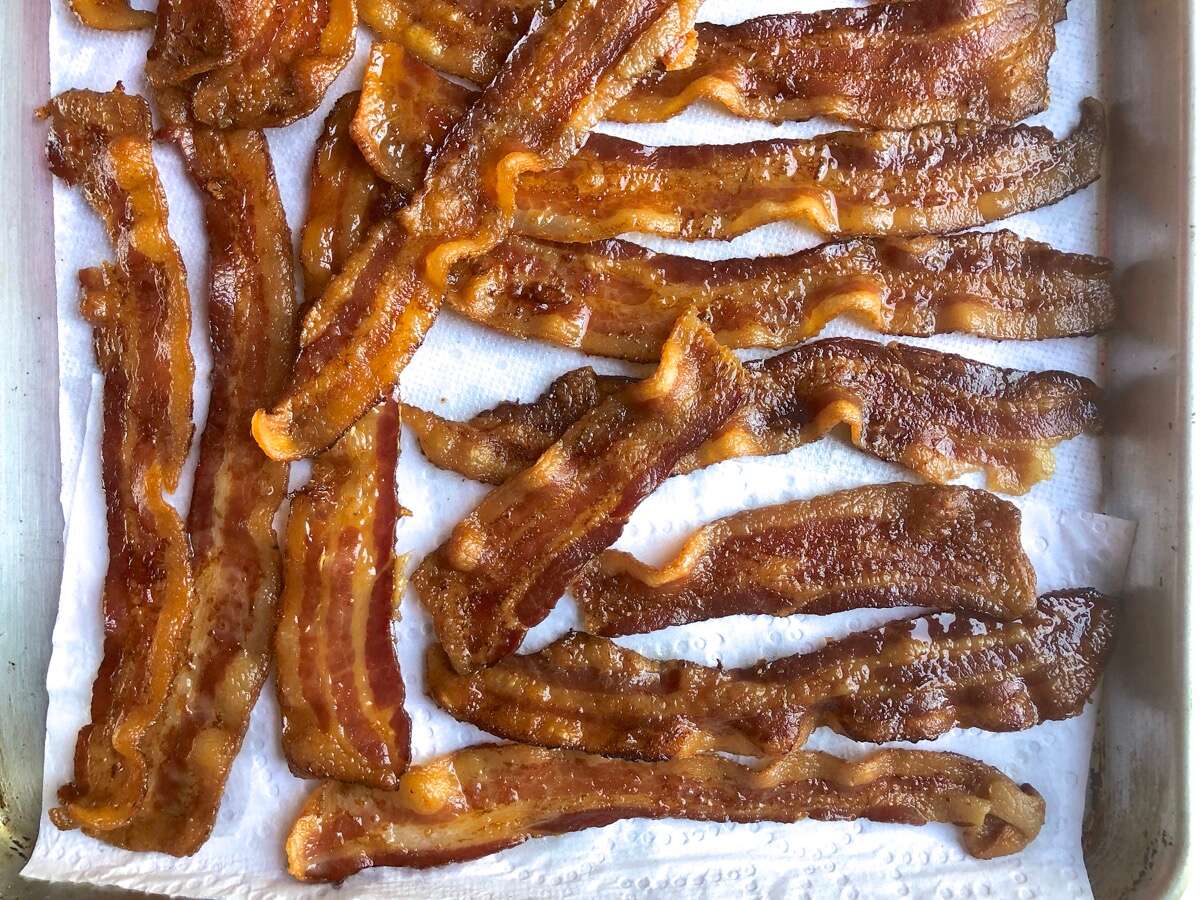 Get it while it's hot! And don't forget the warm cinnamon buns...

I cook bacon n the n the oven, but I place mine in a cold oven and set the temp to 450. By the time the oven reaches the temp, the bacon is ready.

What if you only want to cook 4 to 6 slices do you use the same cooking time?

Hi Sammy! It'll probably be close to the same amount of time but it's always a good idea to look in the oven window a little earlier to be safe.

I have been doing my bacon like this for years the only way to fly. Also if your half sheet pans are stained and groos put them in the oven when you run the self clean, come out like new.

I’ve been handling bacon this way for a long time now. I know this is not ecologically sound, but I make an accordion fan of aluminum foil and place in into an aluminum lined pan. I place the bacon on top of the fan strips allowing the fat to drip off. For holiday brunch’s when I’m doing three pans of the stuff, I take the bacon off and take the pans outside to freeze, (I’m in the north). After everyones gone the grease has gelled and all I have to do is crunch everything up and throw it away. Best bacon cooking method ever. My kitchen is splatter free and clean up is a breeze. I’ve also precooked the bacon this way the night before till they’re just about done and then finished them off in the oven the next day.

I like to bake a pound or so until almost done (done enough for most recipes, but not crispy). I pour off all the fat that I can, then just roll up the parchment and drop it into a ziplock, the it goes straight to the freezer. I know each roll is about a pound, so if I need 1/2 a pound, I pull out a roll, cut quickly in half, and return to the freezer. To serve guests, I can unroll the parchment or move it to new, and reheat a feww minutes in the oven to the crispness desired. It seems to keep well in the freezer in ziplocks for up to 6 months or so.

For years I have made bacon in the oven but have always lined a large, rimmed baking pan [jelly roll size or larger] with parchment. Lightly spray cooling racks ( ones with grids ) with cooking spray and set on top of parchment. Racks all have little feet so bacon does not sit in grease. Place bacon strips on racks and bake to desired crispiness. Pour off grease - wipe paper with dry paper towel and reuse if desired. When making more than just a couple of strips, this is the ONLY way to make it.
This is my preferred method of cooking bacon, although I agree with Ken (above comment) a rack works better. After cooking and cooling I either keep the bacon grease or sop it up with paper towels or newspaper, then flip the rack in the pan and soak with bleach and soap while eating breakfast, makes clean up very easy!
Doesn't the bacon add splatter up the oven?
Hi Deborah! We haven't found the splattering to be excessive if you use the time and temperatures outlined in this post. If you'd like to take an extra precaution though you can loosely cover the bacon halfway through the baking time. Covering it at this time will avoid steaming the bacon which would result in bacon that doesn't become crispy. You can leave the bacon uncovered for the first 15 or so minutes, and then cover it towards the end before the grease would start spattering. Happy baking! Morgan@KAF

Assure your success with this one practice: baking with a scale.