Is this a perfect little yeast roll, or what?

Golden, airy, with a soft, open interior, it's ideal for a pat of melting butter and some apricot jam.

And the nicest part is – this is a no-knead bun. That's right, it's made from batter you simply spoon into muffin cups, and bake.

No sticky hands. No scraping bits of dried dough off the counter.

First of all, who's Sally Lunn?

The name for this soft, mildly sweet bread had its origins in either France or England, depending on which story you believe. One legend has it that Solange Luyon (anglicized to Sally Lunn), a French Protestant, left her native land to settle in England's West Country, where she sold her rich, buttery cakes in the streets of Bath.

To this day, the Sally Lunn Bun, a large, round yeast loaf, is a specialty of Bath bakeries, where it's sold sliced, toasted, and spread with jam and butter, or clotted cream.

Another tale says that Sally Lunn is simply a corruption of the Alsatian solilem(e) or the French soleil lune (sun and moon), and refers to the bread's golden color and round shape. Most sources seem to accept the latter story, though the former is undoubtedly more romantic (which is probably why it came about; why not add a little romance to life whenever you can?)

Sally Lunn became a specialty of Southern bakers in the U.S. a century or more ago. Cookbook author Bill Neal says it's "among the aristocrats of Southern breads." And why not? Light and buttery as brioche, it's much faster and easier to make – perfect for blistering-hot Southern summer days, when all you want to do is relax in the shade with a glass of cold sweet tea.

Since all of us (except you folks in the Pacific Northwest) seem to be having uncomfortably hot Southern weather these days, these individual-size Little Sally Lunns are the ideal way to satisfy your bun craving – with as little steamy effort as possible. 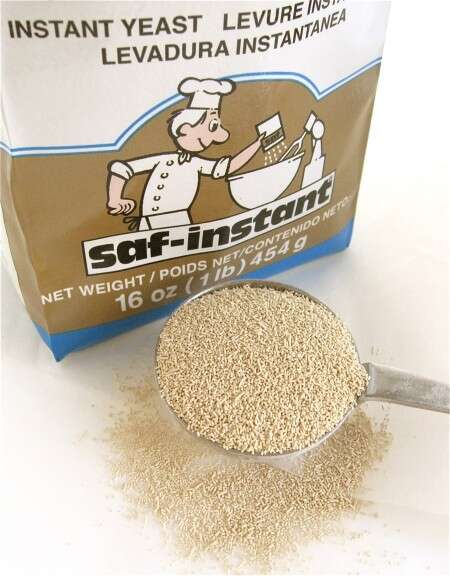 If you already know about SAF Gold, a special yeast for higher-sugar breads – scroll on down to the next photo, because you're in on the secret: SAF Gold works better and faster than SAF Red for sweet yeast breads and rolls.

"So, what's up with that? I thought SAF Red was the best yeast out there."

It is – for all-purpose use. When you're making your basic sandwich bread, pizza, rolls, focaccia, bread sticks, no-knead bread, crusty loaves – anything savory, rather than sweet – SAF Red's your yeast of choice.

But when you're making cinnamon rolls, sticky buns, panettone, challah, anything with a higher amount of sugar in the dough – go for the Gold.

SAF Gold is an “osmotolerant” yeast, which means it plays nicely with sugar. Sugar likes to absorb water; and when sugar’s in bread dough, it pulls water away from yeast, leaving the yeast thirsty. The yeast cells in SAF Gold are bred to require less liquid to function; so they’re better able to withstand sugar’s greedy ways with water.

So, how do you determine if your dough is sweet enough to need a boost from Gold?

Place the following ingredients in a microwave-safe measuring cup or bowl; or in a saucepan:

Heat to lukewarm, stirring to soften/melt the butter. Pour the mixture into a mixing bowl, and let it cool until it's below 120°F, about 15 minutes.

Add the following to the warm milk mixture:

Beat the mixture on medium speed for about 3 minutes; if you're using a bread machine, program the machine for dough or manual, and mix for several minutes, until everything is well combined.

Add an additional 1 1/2 cups (180g) King Arthur Unbleached All-Purpose Flour to the mixture, and beat for about 3 minutes, to make a soft, cohesive dough. Note: This is a very sticky, wet dough; it's too sticky to knead, so has to be beaten to develop its gluten.

Cover the dough and allow it to rise for 45 to 60 minutes, or until almost doubled in bulk. An 8-cup measure is a neat tool here, since it lets you track the dough's rise easily.

If you're using the dough cycle of a bread machine, simply let the machine complete its cycle. 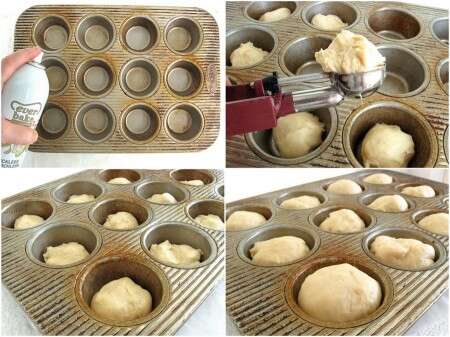 If you don't have two muffin pans (or want to make a loaf, in addition to rolls), lightly grease one muffin pan, plus a 6" soufflé dish or other round, bakeable dish or small loaf pan.

Divide the dough among 18 cups of the muffin pans. If you have a scale, fill each cup with about 40g (1 3/8 ounces) dough; the cups will be a bit more than half full.

If you're using one muffin pan, fill each cup with the amount of dough specified; then shape the remainder into a loaf, and place it in the small pan of your choice.

Cover the pans, and let the rolls rise for 45 to 60 minutes, until they're noticeably puffy. 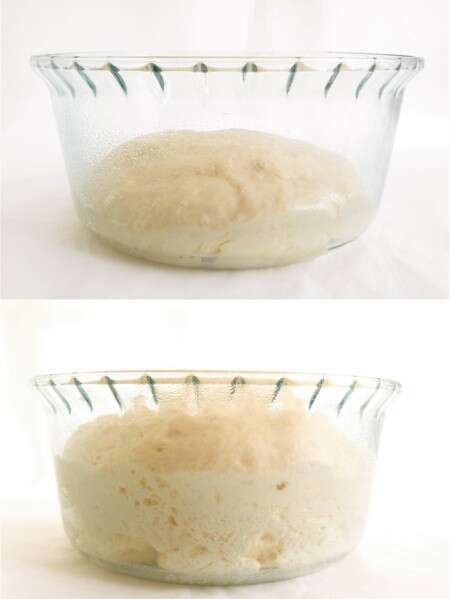 If you're making muffins plus a loaf, here's what your loaf will look like in a soufflé dish – before rising, it'll fill maybe half the dish. Risen, it'll come up to the top.

Bake the rolls until they're golden brown and an instant-read thermometer inserted into the center of one reads at least 190°F, about 15 minutes.

If you're making a loaf as well as rolls, bake the loaf for about 25 to 30 minutes, tenting it with aluminum foil after 15 minutes to prevent over-browning. 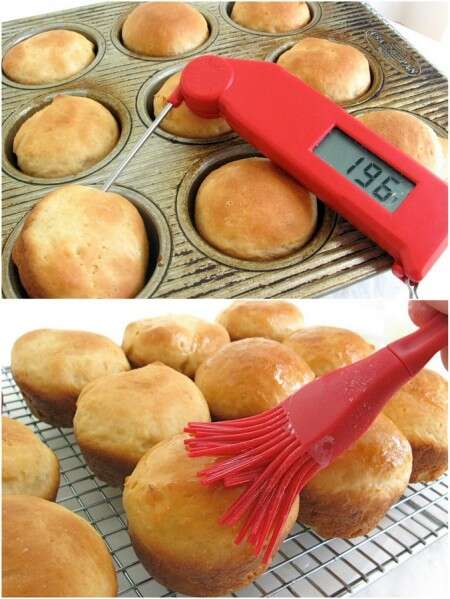 Remove the rolls from the oven.

Are they done? A digital thermometer will tell you for sure. Anything over 190°F, they're fully baked.

Turn the rolls out of the pan onto a rack. Brush with melted butter, if desired.

Serve rolls with butter and jam, at breakfast or brunch; or as part of an afternoon "high tea." 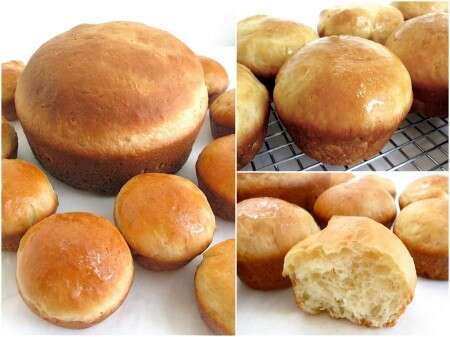 Big Sally, and Little Sallys. Glistening with melted butter. Light as a feather. I just received a bag of SAF Gold in my KAF order today so this would be a great recipe for me to try. How much Fiori di Scilia should I use in place of the lemon oil & should I also use the vanilla in combo with the Fiori di Scilia? I'd try 1/4 teaspoon Fiori to start. You might want to taste a bit of the dough, see if it needs more; it depends on your own taste. You can certainly add additional vanilla if you like - no baking police here! Enjoy - PJH
Made these with regular store bought yeast and they turned out great Very easy and have a wonderful flavor. Taste great warm or room temp.
First - this recipe is awesome! I'm gluten free and was able to make this with an "All Purpose Gluten Free Flour Mix" (betterbatter.org) I followed the recipe using the Ounces as the measurement units for the flour and the sugar. I raised beautifully and the flavor is so good! Second- I'm in SW Washington and we have been very warm for the past couple weeks and it looks like 100's are in the near future. So, I 'baked' my buns in the gas grill!! Host fresh bready buns and didn't heat up the house. :) Cheers! Brilliant idea for the grill. I'm sure others would love to know more details, it is HOT everywhere! ~ MaryJane
I love Sally Lunn. I received a beautiful copper Sally Lunn pan from Colonial Williamsburg many years ago, but I don't make Sally Lunn with it very often because the pan is huge and makes a huge bread that's hard to use up before it goes stale. (Though Sally Lunn makes lovely toast.) This mini Sally Lunn idea is great. Do you think Sally Lunn could handle any whole wheat flour? By the way, blog commenting is no longer functioning from Firefox for me. I noticed in IE that the login for posting is now a popup, so I allowed popups from kingarthur.com in Firefox, but still no love. This is a recent change, as I used to comment from Firefox just fine, with no changes that I'm aware of on my end. I think you could go up to 1/3 of the total flour as White Whole Wheat, but it will definitely change the texture. As for the commenting, when we updated the site, it seems like Firefox users (me included) experienced more issues. As we go along and tweak the bugs out, these should go away. I've noticed improvements already in just one week. ~ MaryJane
We folks in the Pacific Northwest think the 90-degree weather we've been having is plenty warm.
What are the pros/cons of using SAF Gold in place of SAF Red in low sugar recipes? I'm going to run out of my freezer stash of Red long before the Gold; should I buy more Red, or can I use the Gold? Look over your recipe to see how much flour is needed - then look at the sugar amounts. If the amount of sugar is over 1 tablespoon per cup of flour you can use the gold yeast. If the amount of sugar is less than this, save the gold yeast for sweet dough recipes. Happy Baking! Irene @ KAF
Those do look delicious and not at time consuming as making regular rolls. I just bought a bag of SAF Red and would love to use it if possible. Is that possible? Do I need to make any adjustments to make up for the greedy sugar? Thanks! You can definitely use the SAF Red for this recipe. You'll use the same amount of yeast. The only difference you may find is that the dough does not rise quite as high or as fast. If you have additional questions, give us a call on the Baker's Hotline and we'll be happy to help! ~Mel
Those look delicious! Regarding Gold v. Red yeast... I usually make my challah with HONEY not sugar. Do you still recommend Gold over Red? The Red has been so much better and more high rising that other supermarket brands, but if Gold is even better, I'd definitely give it a try. Yes, Amanda, if you feel your challah dough has a significant amount of honey, enough to make it taste sweet, try the Gold - I think you'll love it. PJH