English muffins without the griddle

Tender-crisp, brushed with melting butter, burned around the edges...

BURNED around the edges, you say?

Well, yeah. Have you ever managed to toast an English muffin without burning at least part of it?

I haven't. And my apparent lack of English muffin toasting skills led to a serious discussion here at King Arthur about the photogenicity (is that a word?) of charred-edge English muffins.

I think an English muffin with a bit of a burn looks fine; in fact, authentic, given the way they regularly come out of my toaster at home.

Some of my Web teammates think they look just fine... and some don't.

"But... it's burned!” cried one of the Webbies, as we went over photos for upcoming emails.

“But, it looks bad. We can't use that shot. Don't you have something better?”

I appealed to my teammates for support.

“Hey, don't you guys burn your English muffins? Don't you think this is a good, real-life picture?”

Lukewarm assent from some. No response from others.

I guess the burning subject of burned English muffins just doesn't carry the fascination for others that it does for me.

I ended up losing this particular battle. I suggested switching the email picture to this: 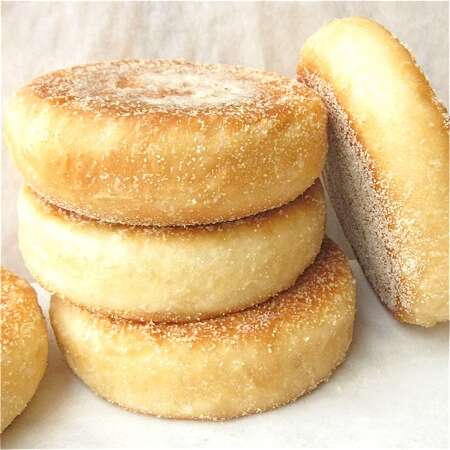 And I have to admit, they look quite handsome. 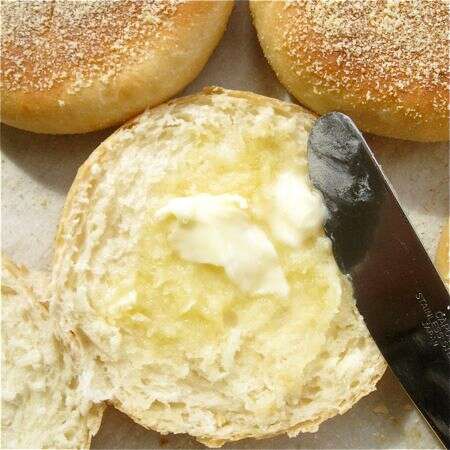 But ultimately, this was the winning email shot. And if this is what it takes to share a shot of hot bread with melting butter, I'll take that tradeoff any day. 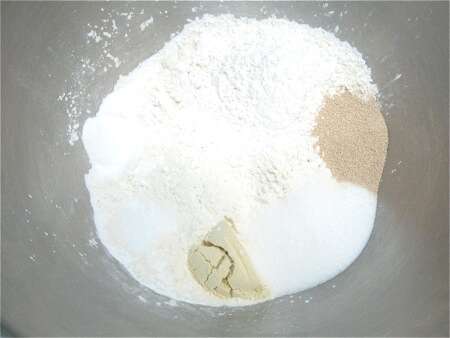 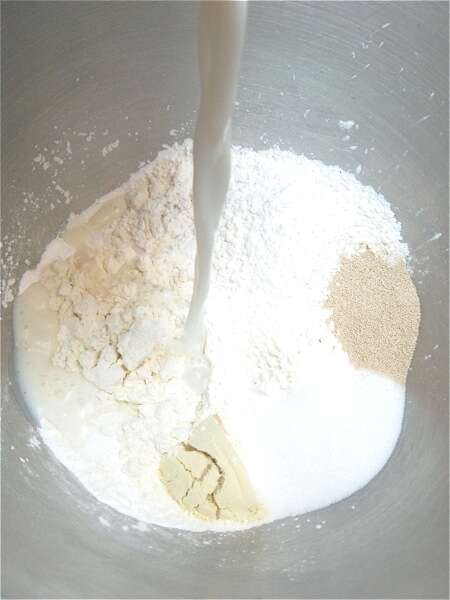 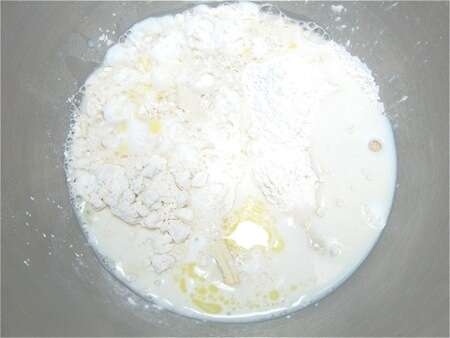 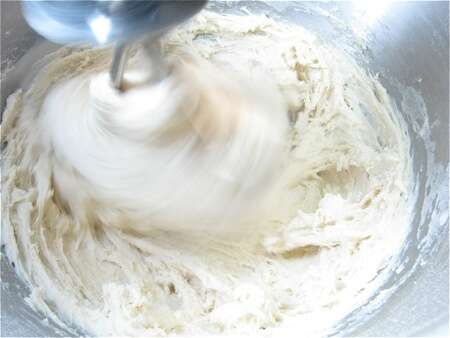 Beat for 1 minute at high speed of an electric mixer. 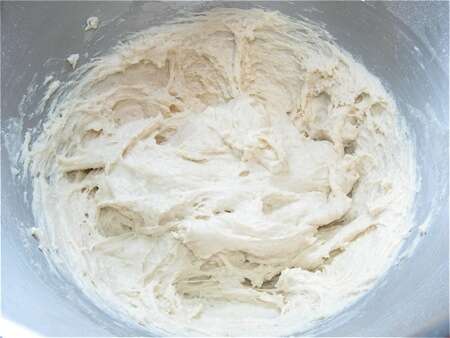 The dough will become somewhat smooth. 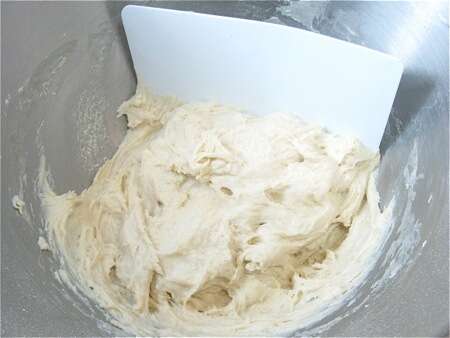 Scrape the dough into the center of the bowl... 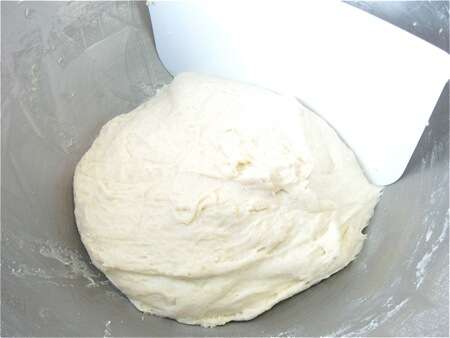 ...scraping the bottom as well as the sides, and turning it over, like this. 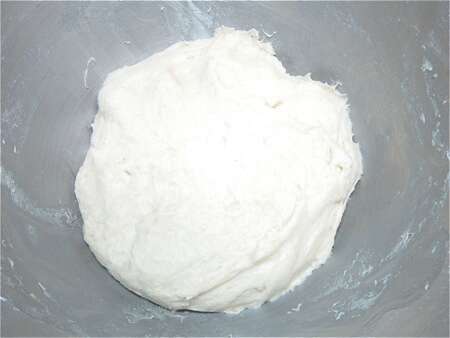 Cover the bowl, and allow it to rise for about 60 minutes... 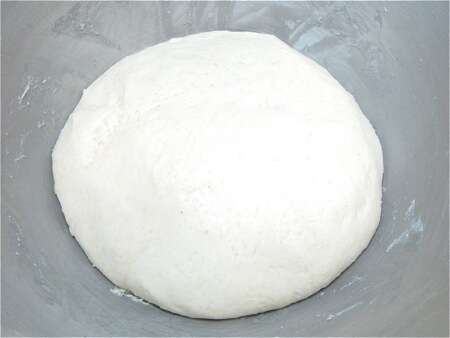 Grease a large (18" x 13") baking sheet; or line with parchment. Grease twelve 3 ¾" English muffin rings, and place them on the baking sheet. Sprinkle semolina or cornmeal into each ring.

Turn the dough onto a lightly greased or floured work surface. Cut it into 12 equal pieces; each will weigh a scant 2 ounces, or about 54g. 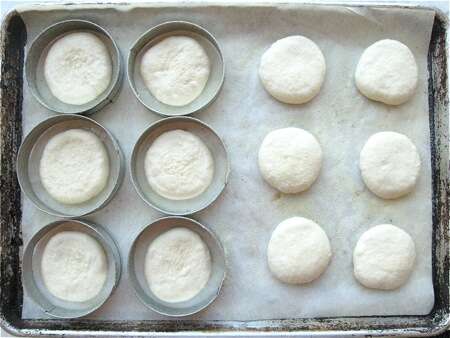 Shape the dough into balls. Place each ball into a ring, pressing it down to flatten somewhat.

How come I'm only using six rings? Because I know lots of you don't have English muffin rings; and I want to see what happens if you don't use them. 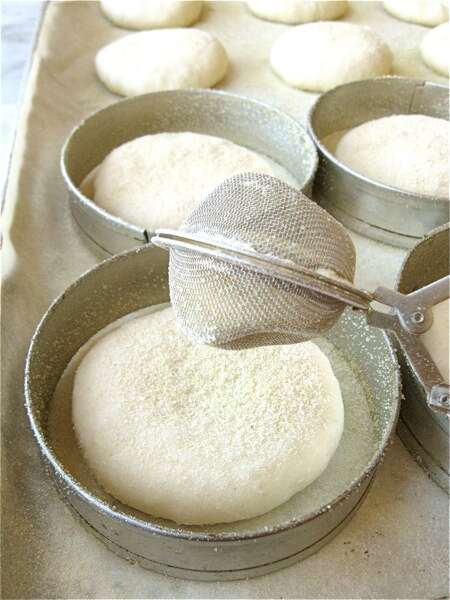 Sprinkle with a bit more cornmeal or semolina. 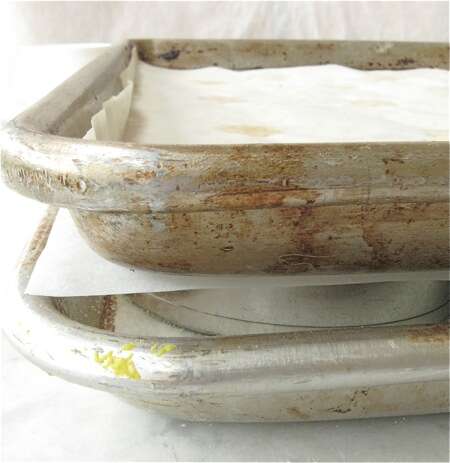 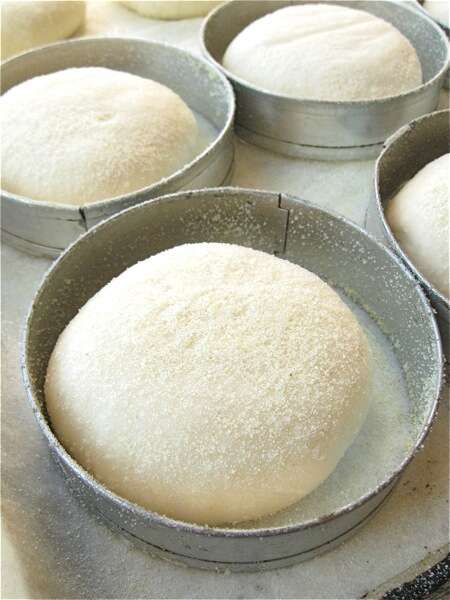 Let the muffins rise for about 60 to 90 minutes, until they've puffed up noticeably.

Bake the risen muffins for 10 minutes, with the top pan still in place. 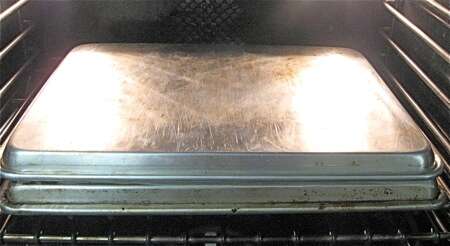 Flip the pans over, and bake for 5 minutes more. 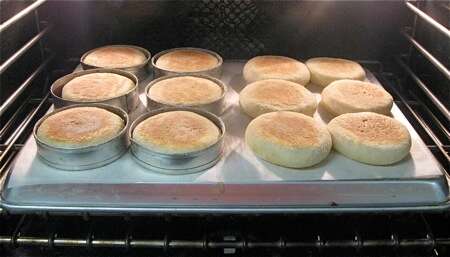 Remove the top pan, and bake the muffins for an additional 3 to 5 minutes, until they're a light golden brown, and the interior of one registers about 200°F on an instant-read thermometer. 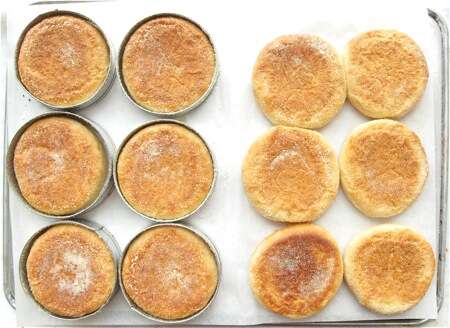 Remove the muffins from the oven. 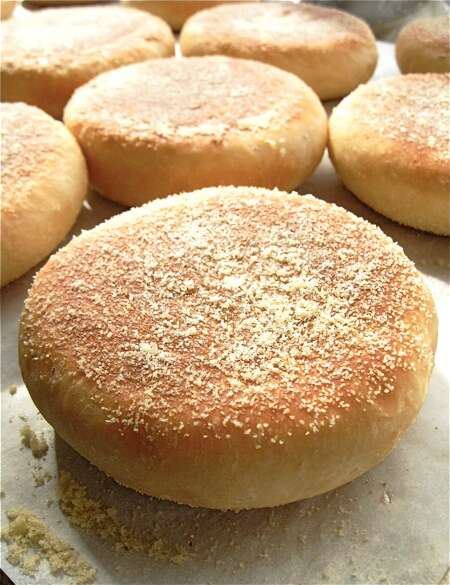 Remove their rings; you can let them cool right on the pan. 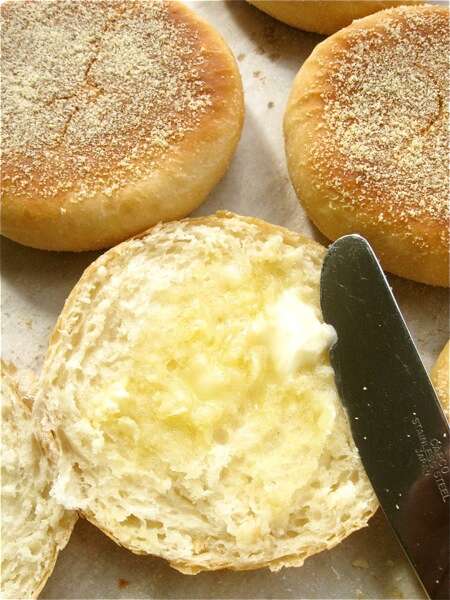 If you serve them warm, you won't even need to risk burning in the toaster!

Here's the difference between using muffin rings (left), and not (right). The rings force the muffins up, rather than letting them spread outwards as they rise.

So, the rings make a nicer looking muffin; but either way, they taste just fine. 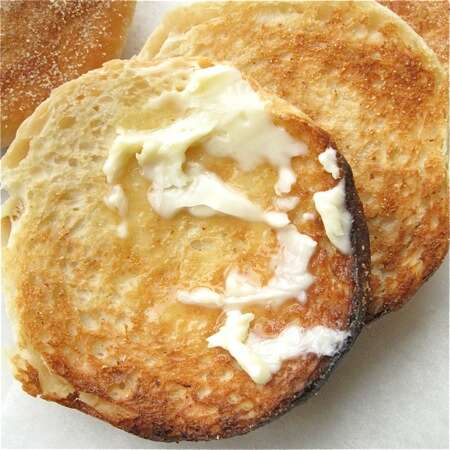 Especially when toasted and charred, just a touch...

I have to admit, that picture of the English muffin with that little bit of char, my mouth immediately watered. YUM!
Great presentation of using rings versus no ring. The ringed muffins look nicer to present to someone eating at my house. But, the flatter one made me think of growing up with my mom in the kitchen.

Hi PJ, YOU are right! Who doesn't have a bit of a char on their English Muffin fresh from a toaster?? Nobody I want to know, that's for sure. Reminds me of the time I had to endure 'steamed' English muffins whilst recuperating from minor surgery years ago. Steamed English muffins, not toasted, were probably the most painful experience of that hospital stay! My question for you: can I make home made English Muffins without letting the dough raise at all? I'm thinking that since letting the dough rise is going to refine the texture, which I do NOT want in EM, why not go from the freshly mixed dough to forming and allowing them to rise once they're formed? Then I'd like to bake them, not dry fry in a pan. yeah, it's all about the nooks and crannies. Please, can you share your thoughts on this? Also, someone gave me a bag of MACA powder and I wonder if I can mix it in with all purpose flour for English Muffins? What does MACA do, exactly? Many thanks for your time and expertise. I look forward to your input.
Pat, that's an interesting proposition! We'd worry that they would be very hard to shape that way, and might deflate after hitting the hot air of the oven after only a single rise. Regarding maca powder, we're not very familiar with it, but it seems to be a dietary supplement. We'd suggest consulting your physician before using it in your baking. Kat@KAF
Do you have the recipe in metric weight measures?
Yes, we sure do. Go directly to the recipe and look under Ingredients. You may choose to view the recipe in volume, ounces or grams. Enjoy and happy baking! Elisabeth@KAF
I was wanting to make a sour dough muffin. How much starter do I add to the recipe and do I need to reduce the flour?
We do have a recipe forsourdough english muffins. If you want to bake any yeast bread recipe and use some unfed or discard sourdough for flavor, simply substitute 1 cup starter for 1 cup flour and 1/2 cup liquid. Happy Baking! Irene@KAF
Noticed that Thomas is making cranberry English Muffins which my daughter said were great but only seasonal. Is it possible to add cranberries to this recipe?
Feel free to add 1/2 cup of dried cranberries (or chopped fresh cranberries) after the dough has started to come together. It may take a bit longer to rise with the addition of the fruit, so be sure to go by the look and feel of the dough before gently deflating it. (It should be puffy and have doubled in size.) You may consider covering the muffins with tin foil halfway through the baking time and then extending the baking time by 3-5 minutes to prevent any exposed berries from burning. This should give you those tasty cranberry muffins to enjoy all year long! Happy baking! Kye@KAF
Hi there! I used this recipe yesterday, following completely except for Hi Maize. I simply added equal amount of flour. I used twelve Mason canning bands and since they are smaller ( approximately 3.25"), I made sixteen balls. They came out PERFECTLY, and the size was just right for those in my family 'calorically' challenged. Each one rose high, filling the bang completely.They were delicious even this morning, LIGHTLY toasted. My only complaint is that they have spoilt me for the store bought equivalent