If you're a cinnamon toast aficionado, keep reading.

If you don't love light, crunchy toast slathered with butter and topped with a shower of crunchy sugar and aromatic cinnamon—why ever not? Keep reading, I'll convince you.

We all know cinnamon toast. Sliced bread, popped in the toaster, buttered, sugared. What I'm talking about here, though, is a different animal. Known by an array of names.

As Shakespeare might have said, had he thought to put down his bowl of breakfast cornflakes and pick up a pen, “A toast by any other name would taste as sweet.”

For those of us who remember Nabisco Zwieback Toasts—and our number is legion, I'd presume—you might notice that they're no longer on the grocery store shelf. Sadly, they've gone to that Big Sam's Club in the Sky, same place you'll find Turkish Taffy, Burry Fudgetowns, Royal Lunch crackers, and Hostess Choco-Bliss.

Discontinued. Dropped. "No longer available," as the marketing arm of their various parent companies will tell you.

But—what about the pie whose crust calls for Zwieback crumbs? The perfect coffee go-with?

And what about the baby?

Because that's who Zwieback Toasts were originally marketed for: teething babies.  It was only after moms started enjoying the leftover crumbs that we adults began enjoying Zwieback, with its faint sweetness, haunting hint of nutmeg and cinnamon, and ethereally light texture.

Gone, all gone. But not forgotten. And now, recreated in a slightly different guise, but with the same delicious flavor and compelling texture.

Finnish Korpu, and Trenary Toast (a native of Michigan's Upper Peninsula), are both thin-sliced bread, spread with cinnamon sugar and oven-dried to stay good for months. Rather than mimic Nabisco's thicker Zwieback (which would take a lonnnnnnnng time to dry out in the oven), I decided to clone these, instead.

The result: Zwieback taste and texture, enhanced with cinnamon-sugar. What could be better?

Aside from banana Turkish Taffy, not much.

If you want to follow along with the recipe as you read, here it is: Zwieback. 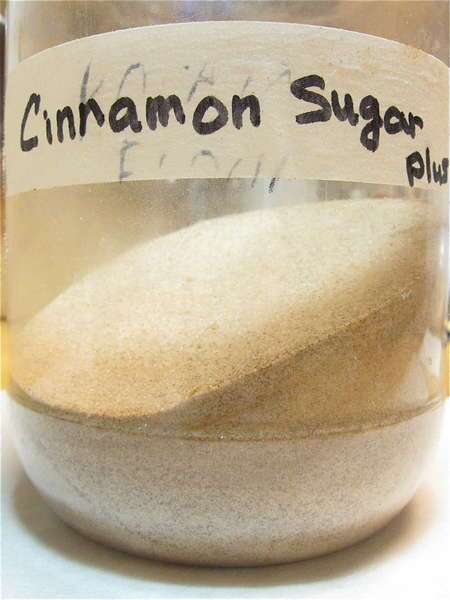 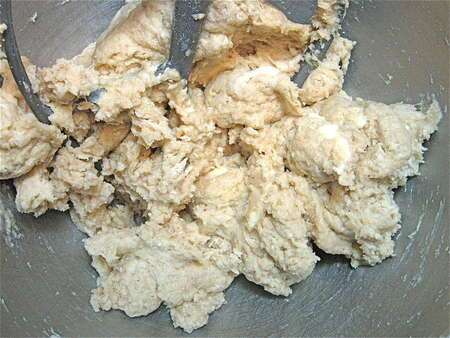 Let's start with a basic rich yeast dough: King Arthur Flour, sugar, salt, and yeast; milk, eggs, and butter. And a touch of cinnamon and nutmeg. 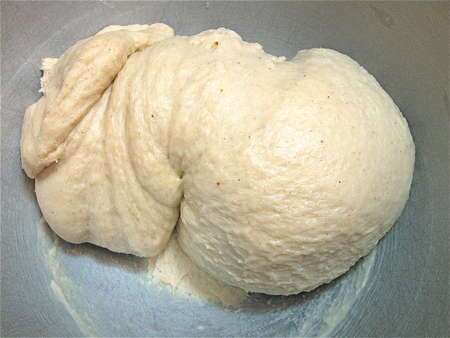 Knead till smooth. Notice that the dough is slightly sticky—see it clinging to the bottom of the bowl? That's fine. Never try to make a sticky dough perfectly smooth; all you're doing is impeding its ability to rise, and encouraging the final loaf to be dry. 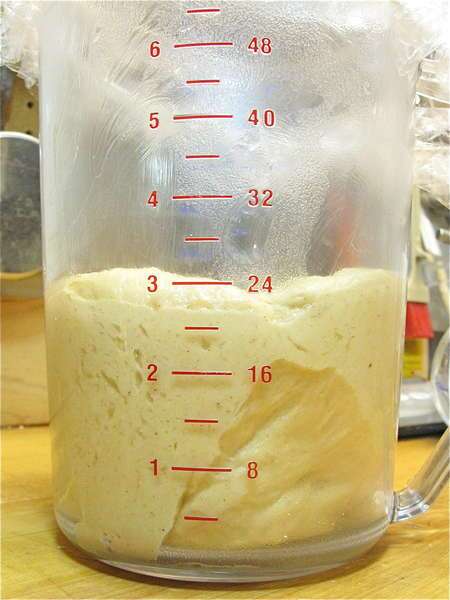 Put it in your favorite rising vessel. As always, mine is an 8-cup measure. 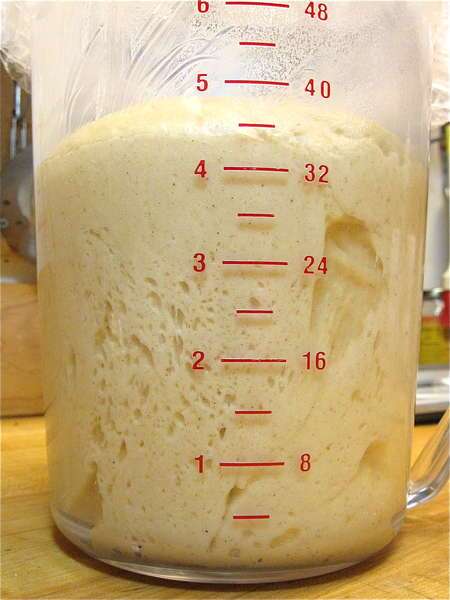 Let rise. This isn't an enthusiastic riser, due to the fat and sugar, but it'll puff up. 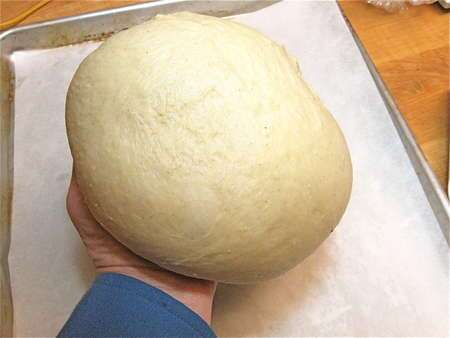 And notice that it's lost its stickiness. As dough rises, the gluten continues to develop, and the flour continues to absorb moisture, changing a sticky dough into one that's easily handled. 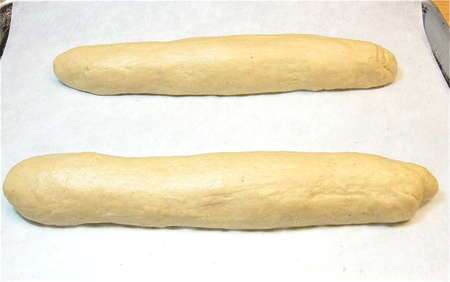 Divide the dough in half, and shape it into two 12” logs. Space them on a parchment-lined or lightly greased baking sheet. A half-sheet pan is just the right size. Cover and let rise for about 90 minutes. 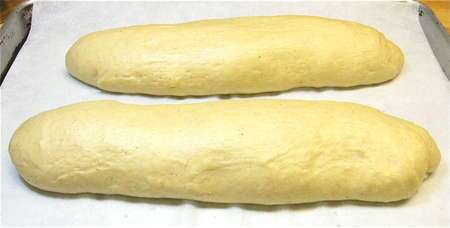 Again, they won't double, but will definitely get puffy. 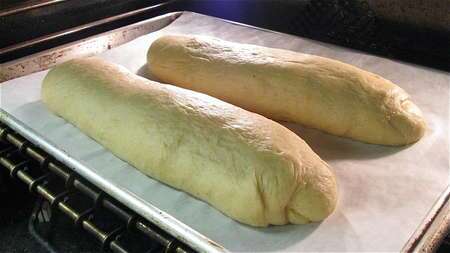 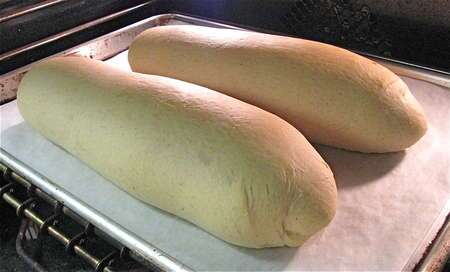 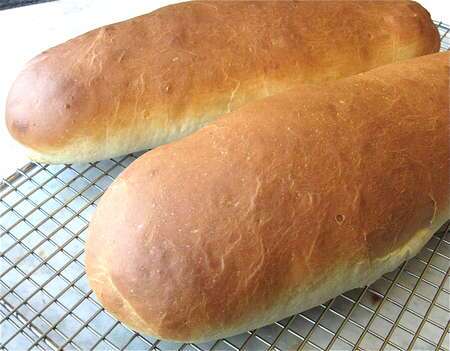 The loaves will get nice and brown, like this. Their internal temperature will be about 190°F. Let the loaves cool overnight, uncovered, on a rack. Yes, uncovered. You want them to start drying out. 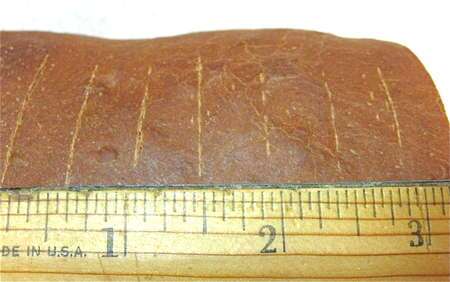 Next day, use a ruler to measure out 1/2” slices. Picky, picky... Well, in this case it pays to be picky. If all your slices are pretty much the same thickness, they'll all dry out at the same rate. 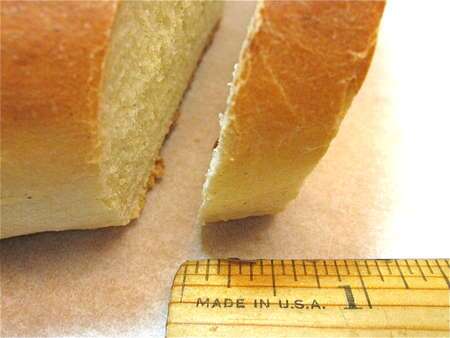 1/2” seems to be the optimum thickness. 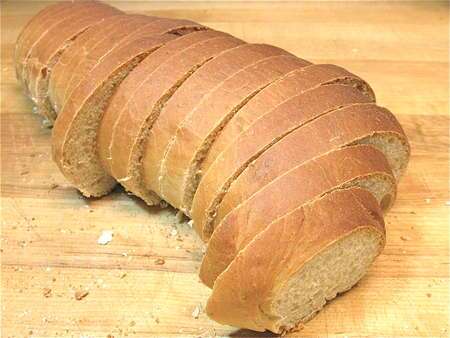 Here's one loaf, cut up and ready to dry in the oven. 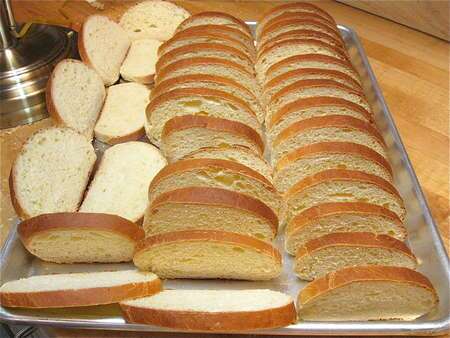 At first I thought, ah, just like biscotti. Stand them on end, dry both sides at once. 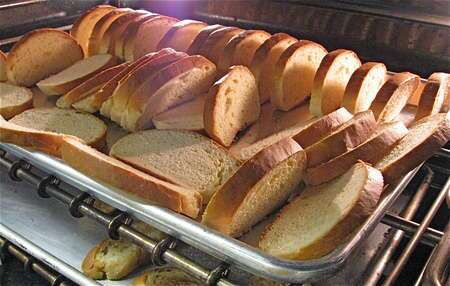 Problem: They were so finely balanced on their 1/2” width, any small movement in the kitchen—an adjoining oven door slamming, someone with heavy feet—caused them to tumble like dominoes. 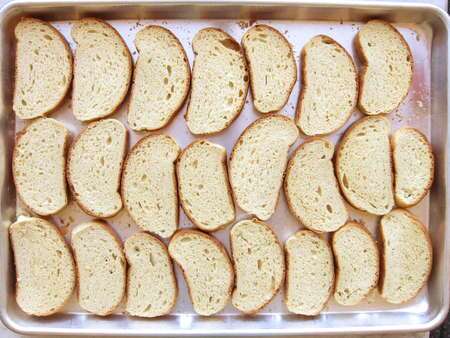 Plan B: Just lay them down. One loaf will fit one half-sheet pan perfectly. Minus the little end nubs. 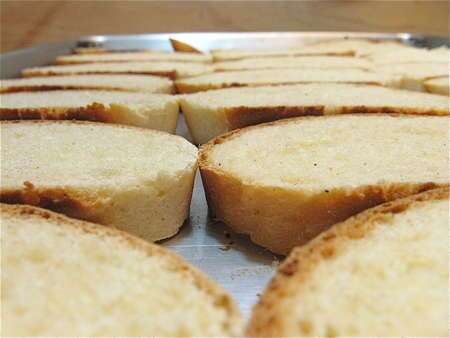 Notice how these are all the same thickness. Nag, nag... 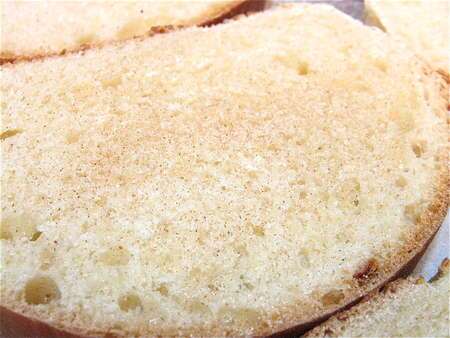 For the MEREST hint of cinnamon, dust with cinnamon sugar. 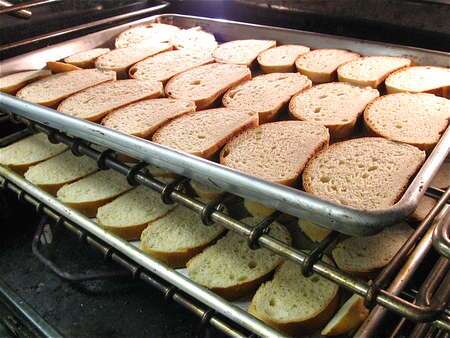 Bake for an hour in a VERY low oven—about 225°F. The bread will start to dry out. 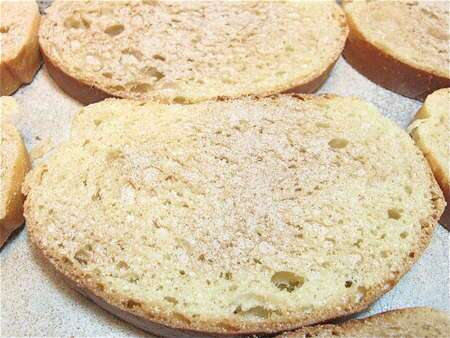 Remove from the oven, and turn all the pieces over. For cinnamon toasts—remember Korpu and Trenary Toast?—sprinkle each piece with about 1/4 teaspoon cinnamon-sugar. Bake for another hour, until the toasts are very dry and crisp. 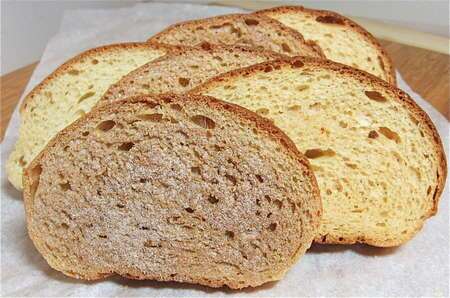 And here they are—plain, and cinnamon. 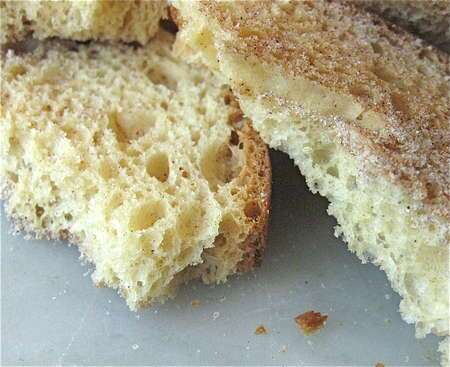 See all the holes? That's what gives this toast its ethereally light, crunchy texture. Minus the cute kid on the box, I think we've got this clone nailed...

Give the recipe a try and let us know what you think!

Ah got it. I was here, that's why I couldn't find it...Thanks. https://blog.kingarthurflour.com/2009/04/22/zwieback-is-dead-long-live-zwieback/
I texted my 3 sisters for mom's old recipe. No one has it. Thanks to the King, I now have this rusk recipe and have found that old heavy 3 cheese cake recipe. Thank you.
We're thrilled to be of service, Patricia! Susan
Brand still makes Zweiback...I just had a slice..its a lot better than the home made stuff. One can buy it wherever German foods are sold, on the web and a lot of times at ALDI
I never really recognized the Zwieback flavor as being cinnamon and nutmeg! I would love to make this bread but I have never been lucky with yeast breads. However, if I ever do decide to attempt it again (I spent a week throwing out brick after brick!) this will be he recipe I try. With the demise of Zwieback, I was heartbroken because my family cheesecake recipe called for Zwieback crust. Graham crackers just didn't cut it, until I made it once more with cinnamon graham crackers and added a pinch of cardamom. It tastes so much like the Zweibach crust that I could barely tell the difference. My family didn't have a clue and I am a hero for saving the family cheesecake recipe!
My grandmother always made turkey stuffing using Zweiback toast. I am now 70 years old & had followed her recipe throughout my adult years.& everyone always raved about it. I was so sad when Nabisco stopped making it, but now I will use your recipe for our Thanksgiving dinner. Thank you so much.
Brandt Zwieback is available from Amazon.com, as are various Garibaldi cookies, which are similar to Sunshine Golden Raisin Biscuits (another tasty treat that is no longer made). Many nostalgic candies are easier to find, such as the original NECCO Valentine (Conversation) Hearts, both the large and small sizes, which are no longer distributed by NECCO.
Zwieback is a German staple and we still make it commercially and it's available online and in European grocery/specialty stores. The brand is Brandt Zwieback. The Kavli and the cinnamon dry toast are still being made because they sell it in the regular grocery store in these parts; lots of Scandinavians. Zwieback is what my mom gave us when we were sick and couldn't keep much down. It's pretty easy on the tummy along with some chamomile tea. This place usually has all of the above, Marina Market if you're closeby. They're in Poulsbo, Washington. :-)
Now that I have a teething grandson, I have looked for Zwieback, only to find it discontinued from U.S. grocery stores. I too was raised on Zwieback in a German family, given when I had the flu and couldn't eat. And my Mom served it with chamomile tea also. Some memories remain a part of your soul. Glad to hear there are others who agree.
Thank you, again. This was my favorite thing as a kid, and I was crushed when I couldn't find it for my now 5 year old. I just made a batch for the 8 month old, and it definitely brings me back...he's a fan too.