These cinnamon buns come together fast

You know those big, fat, super-sweet cinnamon buns you get at the mall or airport? These ain’t them. BUT for those of you who think those mass-produced buns are just too sweet, too gooey, too big… TOO MUCH, I’ve got a calmed-down version that’ll probably suit you just fine.

Baking is one of my favorite pastimes. But there comes a time when there’s NO time: no time to spare, no time to squeeze one more baking “project” into an already crowded schedule. I’m a dedicated yeast baker. But my yeast baking falls by the wayside the week before Christmas. Truth be told, I’ll be making more candy this coming week than anything else, under the assumption that chocolate is welcome under anyone’s tree. (Preview of coming attractions: next Thursday I’ll share my fastest, easiest chocolate bark recipe.)

But back to those cinnamon buns. Remember the “poppin’ fresh” cinnamon buns that sprang from a can, fully formed and awaiting only a hot oven? They came complete with a pop-top can of icing to slather on the hot buns. I loved them as a kid; whacking the can on the edge of the counter to break the seal, separating the buns, spreading the icing on at the end… They were a regular treat after church on Sunday.

Looking at those refrigerator-case buns from my current perspective, however, I realize I don’t want to go back there. In retrospect, the dough was strangely pale and inert, almost clay-like. The taste, a bit chemical-y. Considering their long shelf life in the supermarket, I’m betting their chemical taste was no coincidence. Still… They were fast, easy, and just the ticket on a cold winter morning.

Which brings me to today’s tip: cinnamon rolls (and their kissing cousins, sticky buns) don’t have to be made from yeast dough. Baking powder buns are fast, taste good, and can be refrigerated overnight and popped in the oven half an hour before breakfast. Spread with your own confectioners’ sugar icing, they’re every bit as satisfying as a standard yeast-based bun–with much less work. And at this time of the year, that’s the most compelling recommendation a recipe can have!

This particular recipe, Instant Gratification Cinnamon Buns, makes 16 small buns, just two or three bites each. They won’t give you a sugar high, sit like a lump in your stomach, or overwhelm your daily calorie count (like one of those “mall buns.”) AND, by making them yourself, you know exactly what goes into them: the scariest chemical in these is sodium bicarbonate (a.k.a. baking powder). Here are some illustrations to follow as you make the recipe. 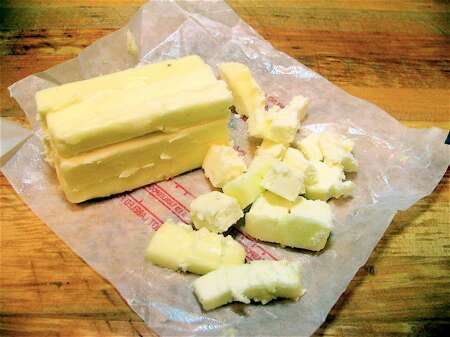 Tip #1: How to cut up a stick of butter for biscuits, scones, or baking powder buns. Use a sharp knife or baker's bench knife to make two vertical cuts that yield three long slabs. Turn the stick 90°, and make two cuts again. If you look at the end of the stick of butter, you'll see 9 little squares. Then cut the butter into 1/2” crosswise pats; separate the pats into 1/2” (more or less) cubes. Don't be fussy; it's OK if 2 or 3 stick together. 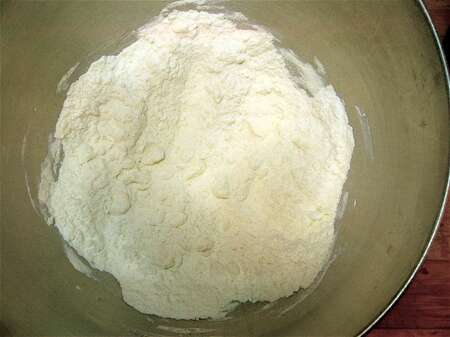 Work the butter into the dry ingredients till the mixture is unevenly crumbly. You've probably heard all about "leaving some of the butter in pea-sized pieces," right? This is what it should look like. 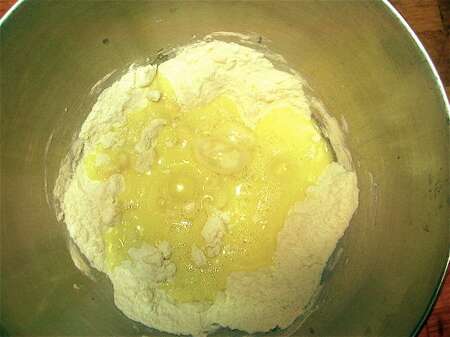 Pour the milk/egg mixture on top of the dry ingredients... 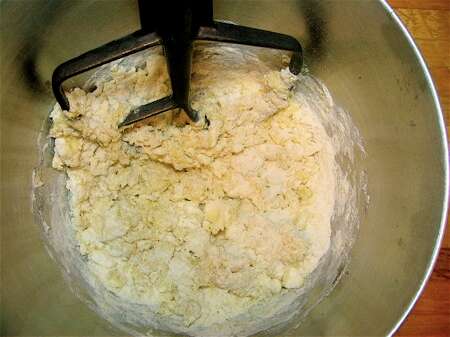 Then mix VERY briefly; 3-4 "pulses" with the mixer bring it to this point... 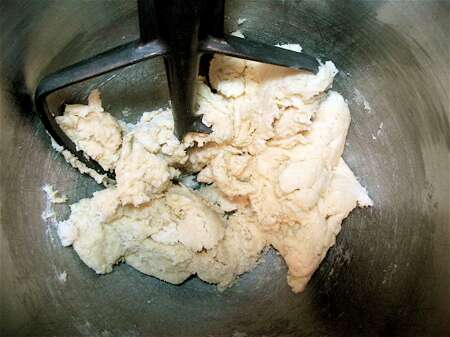 ...and several more brief pulses bring it together. STOP. Right at this point. The more you mix, once you've added liquid to flour, the tougher your buns will be. 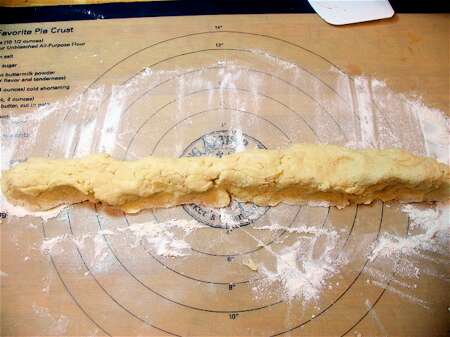 Shape the dough into a rough log on a well-floured work surface, I like using a silicone mat; the counter stays perfectly clean, while the mat gets a simple rinse in the sink when I'm done. 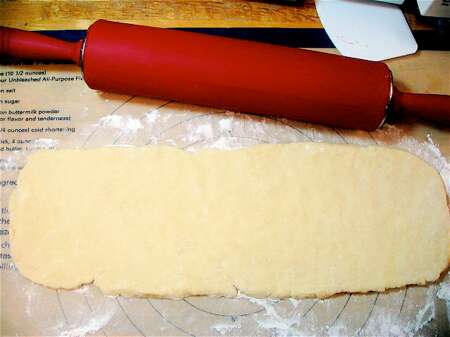 Pat/roll the dough (a silicone rolling pin is handy) into a 6” x 16” rectangle. Don't fuss; it doesn't need to be EXACTLY these dimensions. 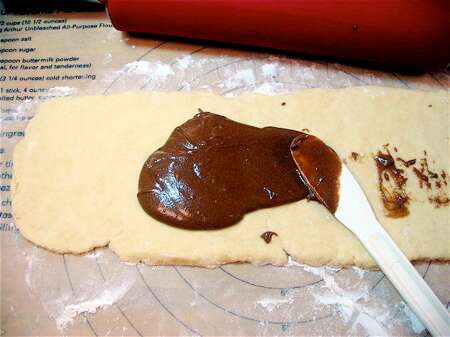 Use a nylon spreader or offset spatula to spread the filling on the dough. I like Baker's Cinnamon Filling; it's easy to use, and is made with Vietnamese cinnamon, so it's ULTRA-cinnamon-y. It also includes some thickener, so it doesn't ooze out into the bottom of the pan as the buns bake. 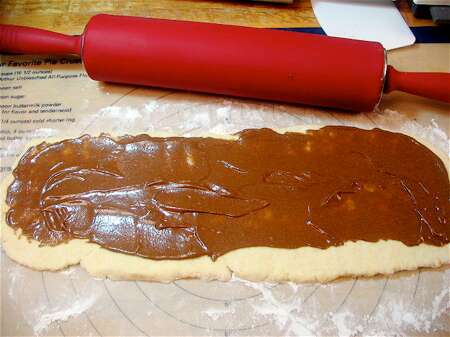 Leave 1” of bare dough along one long side. As you roll, the filling will spread to fill this bare edge. 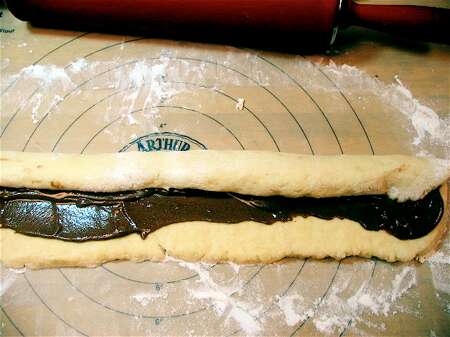 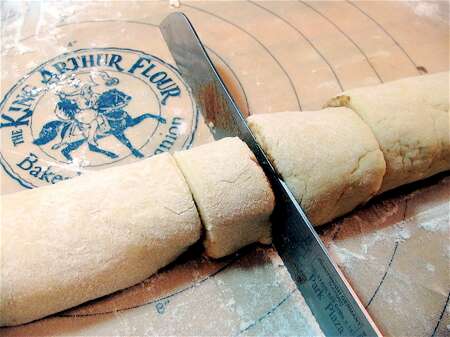 Saw GENTLY with a serrated knife to cut the dough. Being gentle keeps the dough from compressing (and squeezing the filling out), and keeps your silicone mat safe. 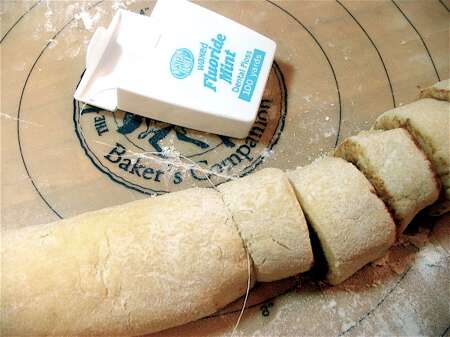 You can also cut buns by looping dental floss around the log, and pulling both ends tight, till the dough is cut all the way through. Some people prefer this method, as there's no chance at all of filling being squeezed out. 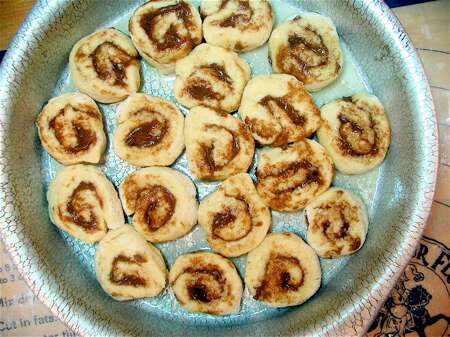 Space the rolls in a 9” round buttered cake pan. Notice they look a little misshapen; that's because I really don't care what they look like at this point, because I know they're going to even out as they bake. Cover with plastic wrap and refrigerate overnight; or bake immediately, if desired. 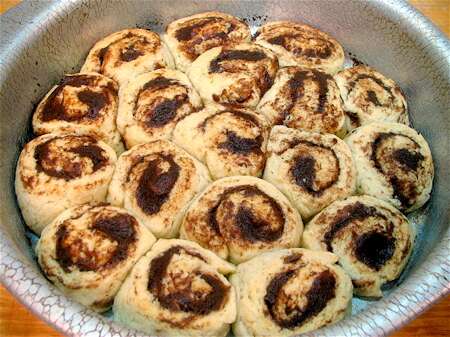 Notice the top of these buns; they're not very brown... 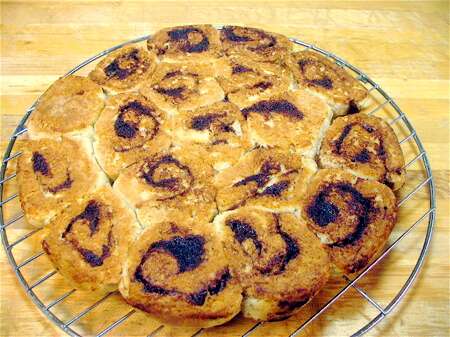 But turn them over, and their bottoms are VERY brown. Don't make the mistake of baking till the top is brown, because the bottom will be overdone. And anyway, you're going to cover the top with icing. 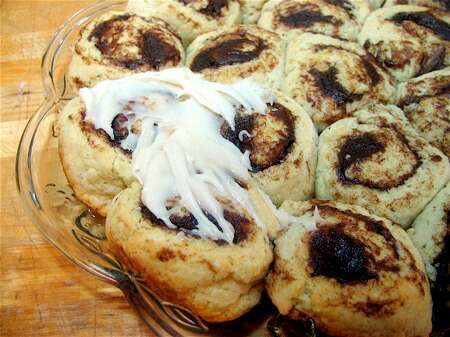 Here's the consistency of icing made with 1 cup (113g) confectioners' sugar, 2 tablespoons butter, and 1 1/2 tablespoons liquid... 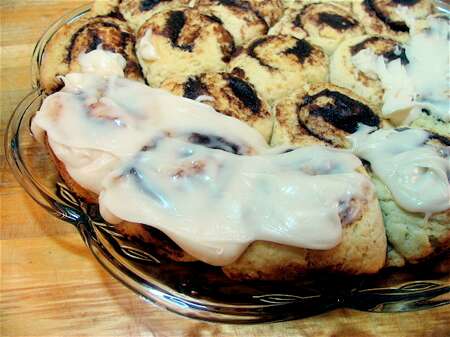 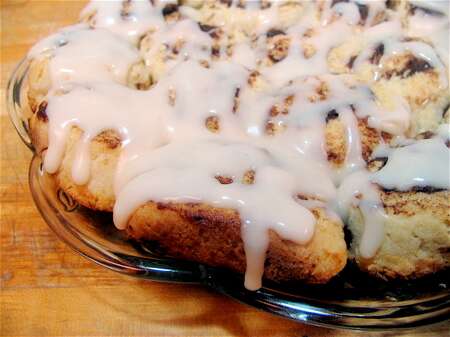 And with 2 tablespoons + 1 teaspoon liquid. Notice how fast icing goes from from stiff to drizzlable, so add liquid slowly.