When deciding which holiday cookies to make, there are a lot of factors to consider — things like taste, texture, and ingredients. But for me, the factor that wins out over all the others is usually appearance. I want a holiday cookie that looks good (and backs up that beauty with flavor).

Enter: Neapolitan Sugar Cookie Bars. They’re layered and almondy and fruity and most importantly pink. And if you top with sprinkles (which I highly — highly! — recommend) they’re even more festive. But unlike many impressive holiday cookies, they’re a cinch to make: Being bar cookies, they require no shaping or rolling or intricate decorating to stand out.

I will take a moment to call out the elephant in the room: These Neapolitan bars do not actually replicate the ~official~ Neapolitan ice cream flavor combination of chocolate, vanilla, and strawberry. Instead, Test Kitchen Director Sarah Jampel, who developed this recipe, opted to use raspberry rather than the customary strawberry.

While not traditional, Sarah says “I chose raspberries, rather than strawberries, because I wanted to make the brightest pink glaze possible, which was easier to achieve with raspberries. Plus,” she adds, “raspberries tend to have a tarter, more concentrated berry flavor than strawberries, which I thought would pair nicely against the sweetness of the cookie itself.” (In addition to the zingy raspberry glaze, the bars also include a dash of almond extract, which evokes another striped Italian dessert: rainbow cookies.)

Neapolitan ice cream dates back to the 19th century, when Italians brought the tri-flavored novelty to the States, where it was quickly embraced. Though chocolate-vanilla-strawberry is the canonized combination, original iterations of Neapolitan ice cream actually weren’t so prescriptive. “Neapolitan ice cream” mainly referred to the method of combining several different flavors into one ice cream mold — sometimes pistachio was used in place of the strawberry, or lemon ice cream slipped in there, or even orange. (So Sarah’s use of raspberry in place of strawberry isn’t so revolutionary after all — though we still like to think of this raspberry version as neo-politan cookies.)

These bar cookies take inspiration from the iconic Neapolitan Cookies recipe that Sarah Kieffer published a few years ago (which in turn were inspired by the Neapolitan cookies that Mathew Rice served at his Nashville cookie shop Pink Door Cookies). Here, they’re transformed into sliceable bars, making them equally suited to a party plate or cross-country shipment. “I wanted to take the idea of chocolate, fruit, and vanilla, then change the form into a cookie bar that is slightly faster to assemble and didn’t use freeze-dried fruit,” explains Sarah.

And indeed, these bars are easier to make than individual cookies. You simply press one layer of chocolate dough into an 8" square pan, smooth a layer of vanilla dough on top, and, once baked, pour raspberry glaze over the top (this is the time to add the optional-but-not-really sprinkles). The bars can be cut as small or large as you like — and the recipe can easily be doubled or tripled if you want a big batch for gifting.

We’ve got holiday cookies for everyone this season: See our brand-new batch of holiday cookies, A Cookie for Everyone, organized by flavor, texture, and style so you can find just the right recipe. 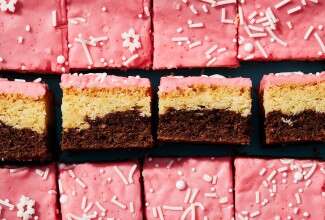 I followed this recipe to the gram with no substitutions, except I made my own cocoa blend of Dutch and black cocoa. I followed the instructions to the letter. I'm an experienced baker. I bake for a living through farmer's markets, so I have a good idea of what I'm doing. That said, this recipe flopped after it was removed from the oven, even after baking for 46 minutes. The edge is a full half inch higher than the rest of the cookie/cake. Is that what is meant by the cookie will have "risen along the edge of the pan?" If so, that description needs some clarification. I used an 8" square aluminum pan with a parchment sling. Also, it would be useful to know the gram weight of the raspberry juice pressed from the berries, so that there is a better chance of getting the icing right. Thanks.

Hi Gary, when shortbread falls flat from the oven it is typically a sign that the butter and sugar have been over creamed. This means that too much air would have been incorporated into the mixture causing it to fall flat when removed from the heat. In this particular recipe we advise to cream 2 minutes at most. Hope this helps and Happy Baking!

I admit that I was moved to make these "cookies" by the picture, and the fact that raspberries were involved in the glaze. I wish I had taken a picture of my countertop while I was making these... it was quite a production. The end result, however, was definitely worth the effort! They are more like a 3-layer brownie than a cookie, and they look adorable when they are cut into the smaller squares suggested. And the taste!!! Oh, that raspberry frosting is such a sweet surprise in your mouth! My husband and I loved them, and so did my sister, and friends I had over for dinner. SO yummy. My glaze was a little too runny, so it ran down the sides, but that didn't matter--the taste of the two layers of tender cake and the raspberry top was just incredible. Love these and will make them again!

Thanks for sharing your successful results, Norma! We're glad to hear this recipe was a winner for you.

The cookies were very colorful and easy to make but they are devoid of flavor. Even the raspberry topping had no flavor. Raspberries this time of year are coming from South America or Mexico and have very little juice in them which makes them good for shipping but not so great eating. I usually love KAF recipes but this one was disappointing.

We're sorry to hear you were disappointed with this recipe, Lucy, but do appreciate your feedback!

The picture of the bar was so cute, and I thought I'd bake them for my neighbor's birthday today. Unfortunately, the finished product was not worth the effort and I'm going to come up with a belated birthday baked treat tomorrow.

Hi Linda, we're sorry to hear this recipe didn't turn out as expected! If you'd like to troubleshoot, please don't hesitate to contact our Baker's Hotline. We're generally here M-F from 9am-9pm EST, and Saturday and Sunday from 9am-5pm EST (extended to 7pm during the holidays). You can call us at 855-371-BAKE (2253), and we are also available via CHAT.

Well, I was disappointed in this recipe. Basically the flavor is underwhelming. Except for the raspberry icing which is delicious. . Very pretty but just simply well, nothing special. In my opinion.
Maybe others will enjoy this more than I did.

Sorry that this recipe didn't impress you, Nancy! We hope you will give some other recipes of ours a chance. Happy baking!