While king-sized sheet cakes and towering multi-layer cakes are eye-catching, there’s also a lot to be said for a smaller, subtler approach. Here’s why I’ve recently fallen in love with 6" mini cakes (and why you will, too):

Here and gone: A single 6" round cake is the ideal size for two to four people to finish in a single sitting. No leftovers to wrap; no half-eaten sheet cake gradually getting stale on the counter.

(Don’t) do the math: Serendipitously, your typical full-size cake recipe (an 8" square, 9" x 13" sheet cake, or a couple of 8" or 9" round layers) is perfectly sized to make two to four smaller 6" cakes: no gambling on overfilling pans, and no leftover batter. I’ll share complete details below, including the best way to make a single 6" cake.

Bake and freeze or share: Six-inch cakes are the perfect size for both freezing and sharing. You’re probably going to make multiples, so keep one and freeze the other(s) for later. Or give some away: Your local librarian, car repairman, vet tech, bookshop owner, or soccer coach will thank you.

Everyone’s favorite flavor: Since you’re making more than one cake from a single batch of batter, you can easily flavor/frost each one a different way. Start with a simple vanilla cake recipe, divide the batter in half (or quarters), then listen to your imagination. Flavor and frost each layer differently: Lemon cake (just add lemon zest) with a hint of Fiori di Sicilia and lemon glaze? Check. Vanilla cake scented with almond extract and topped with fudge frosting and toasted almonds? Double check!

No oven needed: There’s no need to turn on your big oven; 6" cakes are the perfect size for baking in your air fryer.

How to turn a typical cake recipe into 6" mini cakes

As noted above, it’s easy. Simply make the batter for your favorite cake recipe and instead of pouring it into the pan specified in the recipe, portion it into 6" round pans. (Be sure the pans are at least 2" deep.)

Here are some common pan sizes and how many 6" cakes the batter for each will make:

Perhaps surprisingly, you won’t need to adjust the baking time when baking in a 6" pan. Since the depth of the batter in the smaller pans will be very similar to the batter in its original pan — it’s just been scooped into multiple pans instead of one — the baking time will remain within the original timeframe. Just to be safe, though, start checking for doneness about 5 minutes before the recipe says the cake will be ready.

While it’s preferable to bake all of your cake batter at once rather than bake it in batches (for the sake of its leavening), don’t let that stop you from baking cakes in succession if you're short on pans. While there may be a slight difference in rise from the first cakes to any succeeding ones, it should be fairly negligible.

As with any pan, it’s good to line the bottom with parchment to prevent sticking and crumbling; our 5 1/2" parchment squares actually do a good job here. No parchment on hand? Discover other effective methods for making sure your baked cake slips out of its pan easily.

What about layer cake recipes?

Absolutely. You’ll just have to reduce the recipe appropriately. If your recipe can make two 6" cakes, cut it in half. If it’s a larger recipe and would make four 6" cakes, divide the recipe by four. Interested in reducing recipes to fit an array of other size pans besides 6" round? See our article on reducing a recipe.

Hint: If you end up needing half an egg, simply whisk one large egg in a measuring cup and measure out half (a scant 2 tablespoons). If you have a scale, whisk the egg and measure out 25g. Freeze the other 25g for next time you need half an egg — because you know there WILL be a next time!

Do pudding cakes and upside-down cakes work, too?

Yes, they do. Simply divide the topping (for pudding cakes) or layer of fruit and syrup (for upside-down cakes) evenly among however many 6" pans you’re using.

Are there any cake recipes I shouldn’t bake in a 6" pan?

Given the height and shape of a 6" round pan, it wouldn’t be appropriate for a tall (Bundt-style or tube) cake with multiple layers of filling; nor an angel food cake that needs tall sides to rise high. Instead, choose recipes that call for any of the pans listed above.

While most 6" pans on the market are 2" deep, this 6" pan is a more generous 2 1/2" deep, giving you a bit of extra reassurance when using a recipe that might be slightly larger than standard. Highly recommend. 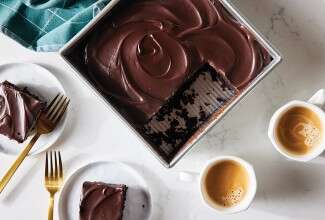 I do this all the time. I just dropped off one of my mini cakes to a friend and we had one after dinner. I love that the pieces are a bit smaller and we can finish it up quickly!

My 2 year old granddaughter and I made the KA original cake pan cake in 6 inch pans yesterday. It was delicious and just the right amount - one to eat and one to freeze.
Thank you so much for this article! I had been looking for ways to downsize my baking. I know I can always rely on KAB.

Thanks for this article!!! I went through several months last year when I was halving many recipes for 6” pans. It’s the best. Can’t wait to share your article with friends.

Thank You for your article on baking in small pans. Just to clarify, baking small Bundt cakes and angel food cake should or not be made in the small pans. I am trying to utilize my small pans and they are bundt and angel food pans. I have used them over the years but, there is always room for improvement, amounts, time, temperature. These fancy pans never come with instructions. The challenge is always fun .

Hi Arlene, PJ just meant that you wouldn't want to try to bake an angel food cake or a bundt cake in the 6" cake pans, but if you have mini angel food cake pans or mini bundt pans, you can certainly utilize those pans for those types of cakes. As you pointed out, baking time and temperature will likely vary a bit for the smaller versions.

As usual PJ you are right on just when I needed this! Perfect for just two!

I love seeing this column! I just received my order of 6" cake pans and was dreading how to figure out what you have presented for us. Thank you, thank you so much for giving me just what I need!

Thank you from a single person!
What a very informative article.
You are the very best.
Let me know if you have one on mini breads.
❤

Thanks for your hard work and experimentation on small batch baking. This is a huge help for those of us in smaller households! I am going to try out my 6" pans today!