We’ve all been there. You’re craving fresh bread. You’ve got the water, yeast, and salt your recipe calls for. You open your pantry for bread flour …

Only to realize your bag has just a sad scoop at the bottom. But there’s a full bag of all-purpose flour right there — will it make a difference if you use all-purpose in a recipe that calls for bread flour?

The answer is yes. Here’s why.

What’s the difference between bread flour and all-purpose flour?

The primary difference between bread flour and all-purpose flour is the protein content. Bread flour has more protein (King Arthur’s is 12.7%) than all-purpose (11.7%). For context, pastry and cake flours have less, about 8% to 10%, respectively.

Those may seem like small differences, but they have a big effect on how the flour behaves. The protein in flour is what forms gluten in your dough, so higher protein means more gluten. (Though not always! Read about why whole wheat flour is one exception in this guide to gluten.) More gluten means stronger, stretchier dough, which is critical for a tall, airy loaf of bread.

Why bread flour can make a difference in your bread

Let’s back up to what happens when you make bread. Wheat flour contains two proteins called glutenin and gliadin. When you add water to wheat flour, a strong, stretchy substance called gluten begins to form. Once the dough is formed, you have a solid ball of gluten and starch with no bubbles in it. To get the airy, open texture of a loaf of bread, you’ll need to leaven the dough to get those bubbles — either with commercial yeast or sourdough culture.

Fermentation is the breakdown of organic substances into smaller parts by microbial processes. In bread, this means the starches in the grain are consumed by the yeast and bacteria and broken down into sugars, acids, and, crucially, gases. The gas bubbles become trapped in the gluten and starch web, leavening the dough and making it big and fluffy.

The more gluten there is in the dough, the more it can stretch to accommodate the gas bubbles. Gluten is both stretchy and strong — what bakers call “extensible” and “elastic.” This combination allows bread dough to capture and contain the carbon dioxide bubbles produced by yeast; as their numbers grow, the dough gets bigger. If you make a bread dough with all-purpose flour, the gluten network won’t be as strong because of the lower protein content; this means the dough won’t be able to stretch as much to accommodate those bubbles, resulting in smaller bubbles and bread with a tighter crumb.

Since the proteins in bread flour absorb more water, bread flour is also a great choice for recipes that call for a lot of liquid. For instance, the beautiful open crumb of Pan de Cristal requires high hydration, which in turn needs bread flour to create strength in such a wet dough. If you use a lower protein flour like all-purpose with the same amount of water, the dough will be too wet, sticky, and loose, and it will be more difficult to handle and shape; it may also be gummy when baked.

When to bake bread with bread flour, and when to use all-purpose

You may be wondering, “If bread flour is so great, should I be swapping it in for all bread recipes that call for all-purpose?” The answer is: Keep it simple and use the exact flour called for in a recipe. A baker will have developed their recipes based on the characteristics of the desired bread, and they will have chosen the correct flour for this application.

All-purpose flour can also make great bread — many professional bakers use and love it in their loaves. It can be particularly good for Irish soda bread or other quick bread recipes that use baking soda instead of fermentation to leaven the dough and are meant to have a denser crumb. You can also use all-purpose in many bun or roll recipes, which tend to have lower hydration and rely less on strong gluten and more on butter and sugar for texture. (Though bread flour can still give you a fluffier, almost cotton-candy-like texture in most buns and rolls.)

You could even technically substitute all-purpose flour for bread flour if you add less water, mix the dough more gently and for a shorter period of time, and don’t expect the same results. But if a recipe calls specifically for bread flour, you can count on it making a difference in your final loaf.

Bottom line: If you’re looking to make a high-rising, well-textured loaf of bread, it’s worth it to start off with the flour selected for that purpose.

Putting bread flour to the test

I baked four recipes with both flours to compare the performance of bread flour and all-purpose side by side. I was careful to use the same mixing times, temperatures, and recipes for the most accurate comparison: Here are my baking notes from each.

Milk bread: This recipe yielded the most similar results between the two flours, which makes sense because milk bread usually has a denser crumb than other breads. In fact, the loaf with all-purpose flour stood a tiny bit taller than the bread flour loaf. The texture, however, was different. The all-purpose flour milk bread crumbled when I cut into it, instead of slicing cleanly. Still, if I only have all-purpose flour on hand, an enriched pan loaf like this one would be the recipe I’d choose.

Focaccia: The two focaccias were very different. The one made with bread flour was taller, airier, had much more open bubbles in the crumb, and browned nicely. In the mixer, the all-purpose dough never seemed to come together as a cohesive whole in the same way as the bread flour dough.

Sourdough Boule: One of the big differences between the sourdough and the other breads was that I mixed the dough more slowly and by hand. The country dough made with all-purpose flour seemed to form gluten better with this slower, more intermittent mixing style than it did with the focaccia and baguettes, which were mixed in the mixer. Still, the bread flour dough was sturdier and stronger, making it much easier to shape and resulting in a taller, more airy, more golden bread than its all-purpose counterpart.

It’s easy to think of flour as being more or less the same, but there are big differences between various types. It’s always a good idea to make sure that the flour you’re using is the flour that the recipe calls for — just like you would with any other ingredient. Your best bet is to grab a bag of both bread and all-purpose flour so you'll always have exactly what you need on hand. 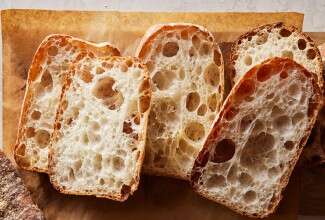 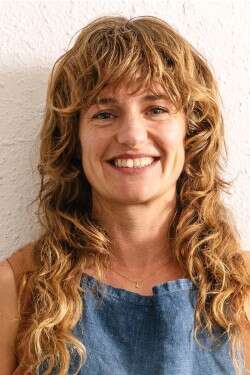 Jennifer Latham is the author of Baking Bread with Kids: Trusty Recipes for Magical Homemade Bread and co-author of Bread Book with Chad Robertson. She is the former director of bread at Tartine, where she managed the bread-making teams in Northern and Southern California.

View all by Jennifer Latham

Another way flour makes a difference: When I was first making bread I had already switched to King Arthur flour. My brother shopped for me and brought home a different brand. It was a good brand. Our family had used it for decades. He said he figured I needed the flour. He was right and I figured it really wouldn't make any difference. How wrong I was. Their flour vs your flour (both were bread flours). Taste, texture, everything was way better with KAF. Since then I've always used KAF all purpose and bread flours and never have been disappointed. Love it. I'm 77 and have been making bread since I was 40, continuously for 27 years. Guess that's a pretty good test.

Thanks for sharing this lovely testimonial, Kathleen, and thanks for baking with us for all those years!

Have there been any tests done to compare KA high gluten flour to AP and bread flour? I know it’s got an even higher protein content than bread flour (somewhere in the 14-15% range). I’ve been using the high gluten flour to make NY style thin crust pizzas and bagels. And I know it can give a bit of chew to whatever it is you’re baking. Just wondering how it would affect breads, specifically the ones that were compared in this blog.

Hi Tanya, this is another case where switching up the flours might require some adjustments to the recipe. In general, higher protein flours absorb more liquid than lower protein flours, and you also tend to get a chewier/less tender result the higher the protein content of the flour you're using. Another consideration is that protein and starch are inversely proportional in wheat flour, (which means that the higher the protein, the lower the starch content); since starch is the major contributor to flavor development, using a higher protein flour can also have an impact on flavor.

I’m wondering if adding other ingredients (like mashed potato or egg to all purpose flour could yield results that are similar to using bread flour? That is, if one doesn’t have bread flour on hand when the recipe calls for bread flour, are there other ways to improve the structure?

Hi Barbara, this could take some experimentation. For now, we have the option of adding vital wheat gluten to a recipe. https://shop.kingarthurbaking.com/items/vital-wheat-gluten Happy Baking! -Maranda@KA

Hi Barbara, it really depends on the recipe, and in some cases you may be totally fine using our Unbleached All-Purpose flour, which is high enough in protein for many breadmaking projects. Sometimes a slight reduction in the liquid content might be all the adjusting you need to do. However, I don't think mashed potato or eggs would be a good solution for boosting the protein level of unbleached all-purpose flour because both these ingredients will add moisture to the dough, which is likely to make gluten development a bit more challenging. Sometimes adding a small amount of Vital Wheat Gluten might be a good solution if the recipe really requires a higher protein level. In any case, we encourage you to check with our Baker's Hotline if you're ever in need of making a substiution that you're not sure about: we're always happly to help! We're generally here M-F from 9am-9pm EST, and Saturday and Sunday from 9am-5pm EST, and you can reach us by phone at 855-371-BAKE (2253) or via CHAT.

Thanks for clarifying the differences bread flour vs all purpose flour make in baking. You are very good at explaining and have convinced me to pay closer attention to details when I bake bread. I am very much a beginner but you have convinced me that honoring a recipe is the best practice.

Thanks again for taking the patience to set things right. You set a fine example.

How to master brioche and unlock a whole world of baking