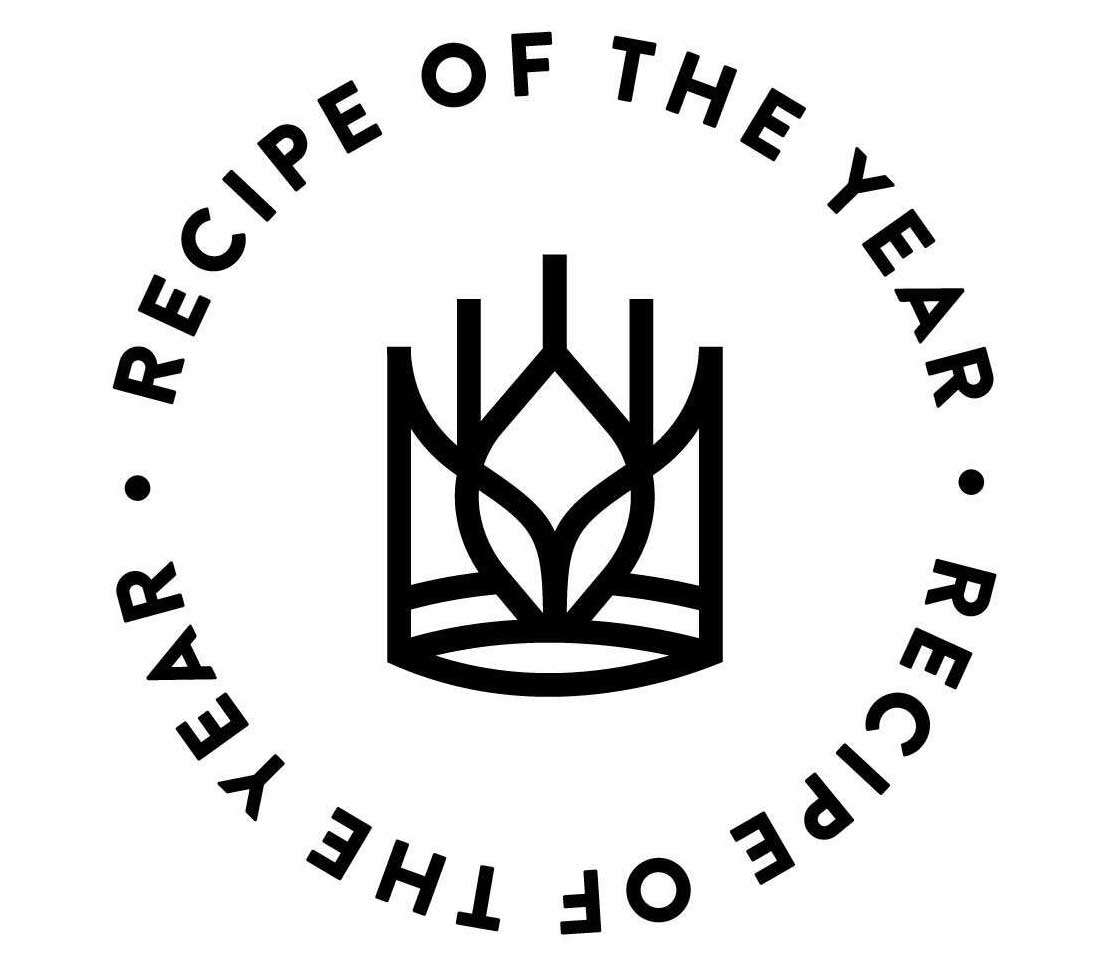 There are many ways to enjoy our 2021 Recipe of the Year, Perfectly Pillowy Cinnamon Rolls. The most extravagant serving method? Erin McDowell's cinnamon roll tower! Below, the cookbook author and baker extraordinaire shares how to make this over-the-top tower.

Cinnamon rolls are more than just a sweet breakfast treat to me — in my book, a good cinnamon roll is the definition of celebration-worthy. Luckily, King Arthur Baking agrees with me, which is why they named their Perfectly Pillowy Cinnamon Rolls the 2021 Recipe of the Year! These rolls are the perfect choice for any cinnamon roll lover: soft, fluffy, and beautifully swirled. But they’re especially ideal for my recent creation: the cinnamon roll tower. (Yes, I said TOWER.)

I originally dreamt up this tower as a display-worthy centerpiece, perfect for any number of occasions. Iced, cinnamon-filled, and stacked high, it could work for a birthday, wedding, anniversary, baby shower … maybe even Father’s Day for a particularly hungry dad?

Though celebrations look a lot different right now, one thing I’ve learned in the past year is that it’s important to still find ways to celebrate. So even without an occasion in mind, let alone a large multi-person gathering in sight, I decided there was no better time to build the cinnamon roll tower of my dreams, just because. (Not to mention, I could remotely share the wealth with my neighborhood in the process!)

Here’s what I did to make this six-tier cinnamon roll showstopper, so you can try it yourself in your own kitchen.

Making this tower starts the same way the regular recipe does: preparing the Perfectly Pillowy Cinnamon Roll dough. The main difference is that we need to make a lot of it. To have enough rolls to build this tower, I made the recipe six times. 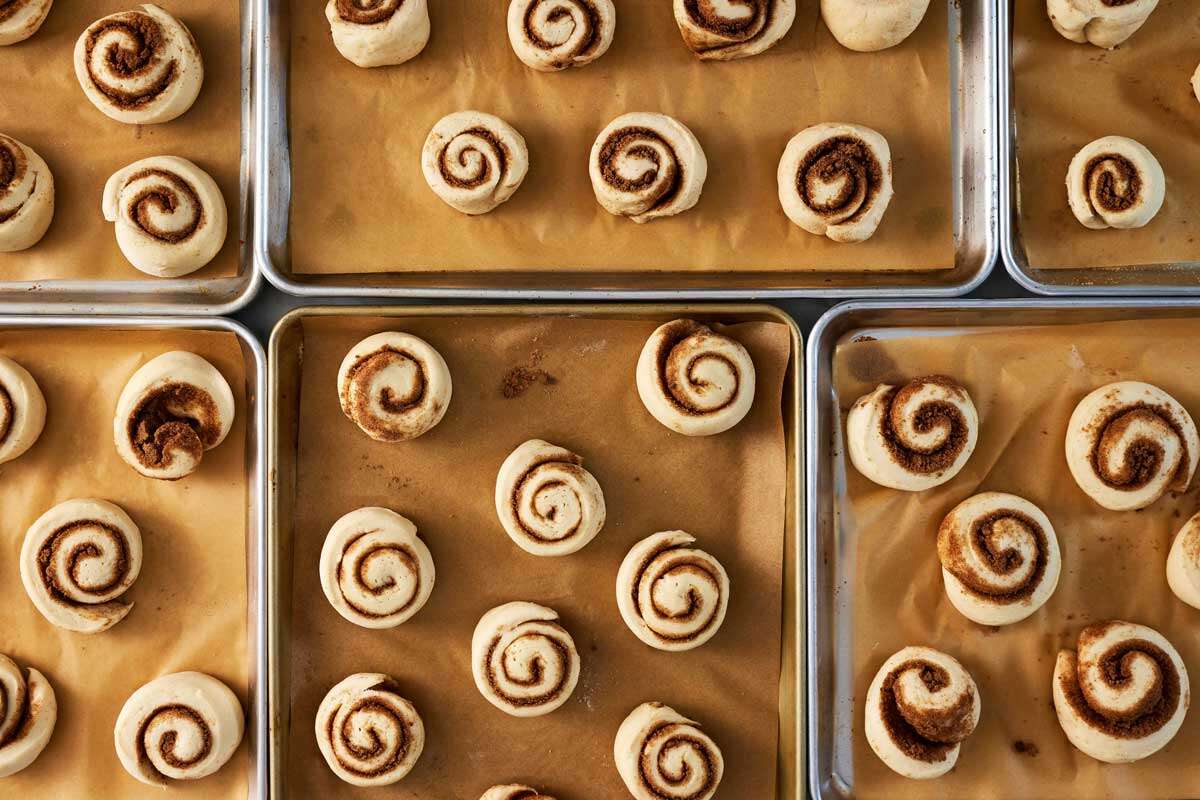 I mixed each batch of dough individually, then let it rise as directed in the recipe.

As a deep lover of baking science, I enjoy knowing how the components of this recipe come together to work in perfect harmony, and it all starts with the tangzhong method. A portion of the milk and flour are cooked together before mixing, which gelatinizes some of the starch, allowing for the use of more milk in the final ratio. All of this is possible while still maintaining a dough that's easy to work with.

In short: the tangzhong technique makes a super-soft dough that stays soft, even as the rolls cool. 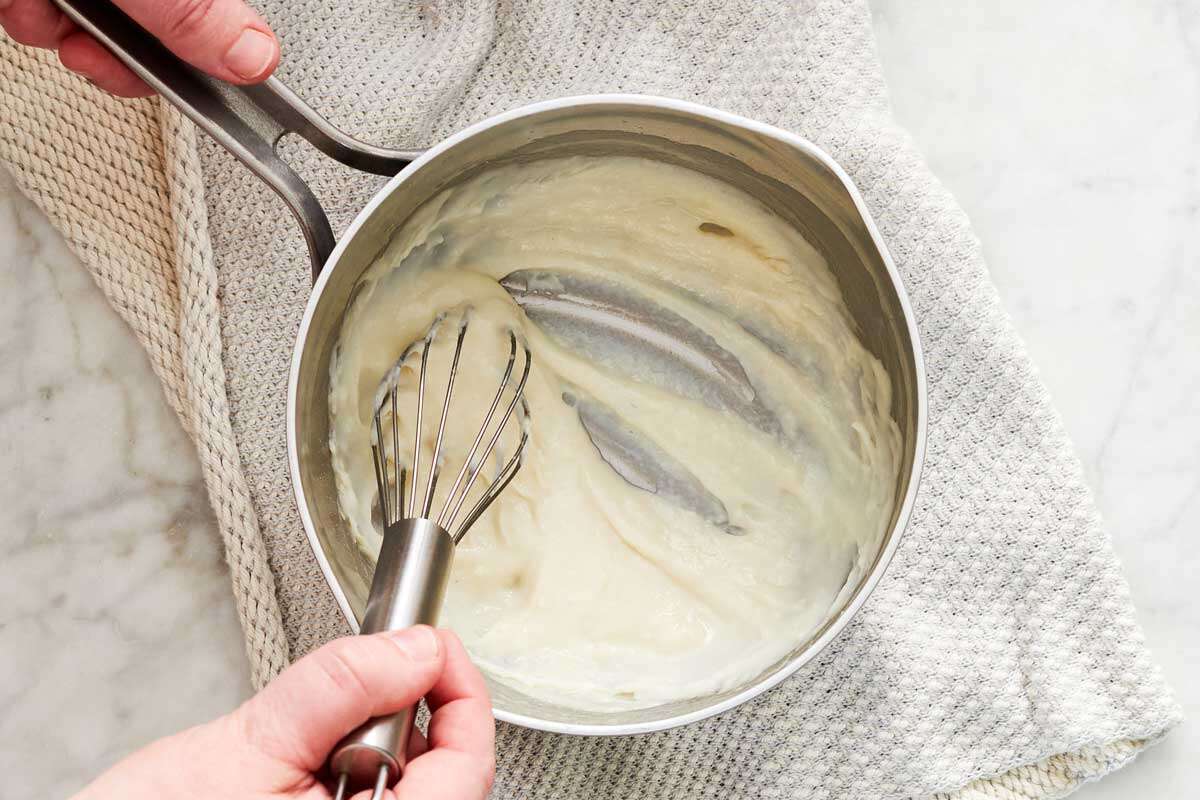 While the dough rose, I mixed together the filling (six times the original recipe as well). I love that this recipe opts for a filling with a sandy texture — it makes it easier to get even coverage when you assemble the rolls, and it makes for an especially picture-perfect swirl effect on the final rolls!

Assemble and bake the rolls

Speaking of assembly, I made just one tweak to King Arthur’s recipe: adjusting the size of the rolls to make them slightly smaller. I did this because the recipe as written makes eight large cinnamon rolls, which can be a bit harder to stack in a way that will make the tower look really full. I opted instead to roll the dough to slightly different dimensions: 8” x 18” (instead of 10” x 12” as called for in the recipe). This altered size kept the dough at a similar thickness but allowed me to get 15 rolls from each recipe.

One of my cinnamon roll pro tips: I like to use my bench knife to square off the edges of the dough after it's been rolled. Squaring the edges makes it easier to keep each roll the same size (instead of those pesky end pieces naturally being a little smaller). Use your bench knife to trim and adjust the sides and corners of the dough as needed until you have straight edges and sharp corners. 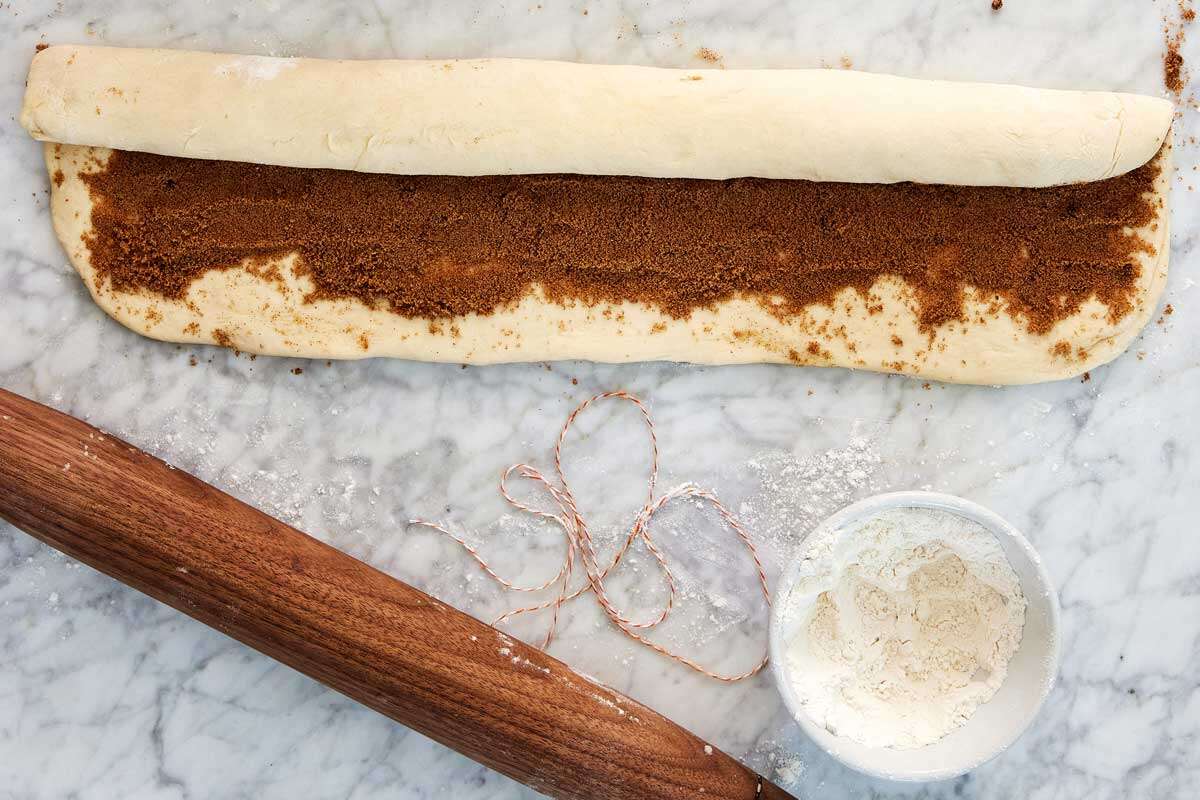 Once the dough was shaped into an even rectangle, I sprinkled on the filling and rolled up the entire log. I used baker’s twine to cut the rolls, following the advice from King Arthur's bakers. (Again, I’m all about that signature spiral moment.) You can also use dental floss instead of twine, as the recipe page illustrates.

After proofing, I baked the rolls; it’s worth noting, my slightly smaller rolls took 2 to 3 fewer minutes to bake, so set your timer a little earlier while baking.

Because these rolls were ultimately getting the royal treatment, I wanted to find an additional way to gussy them up. I mixed up my own blend of different spring-colored sprinkles, then gave each roll some flair after I slathered it with icing. 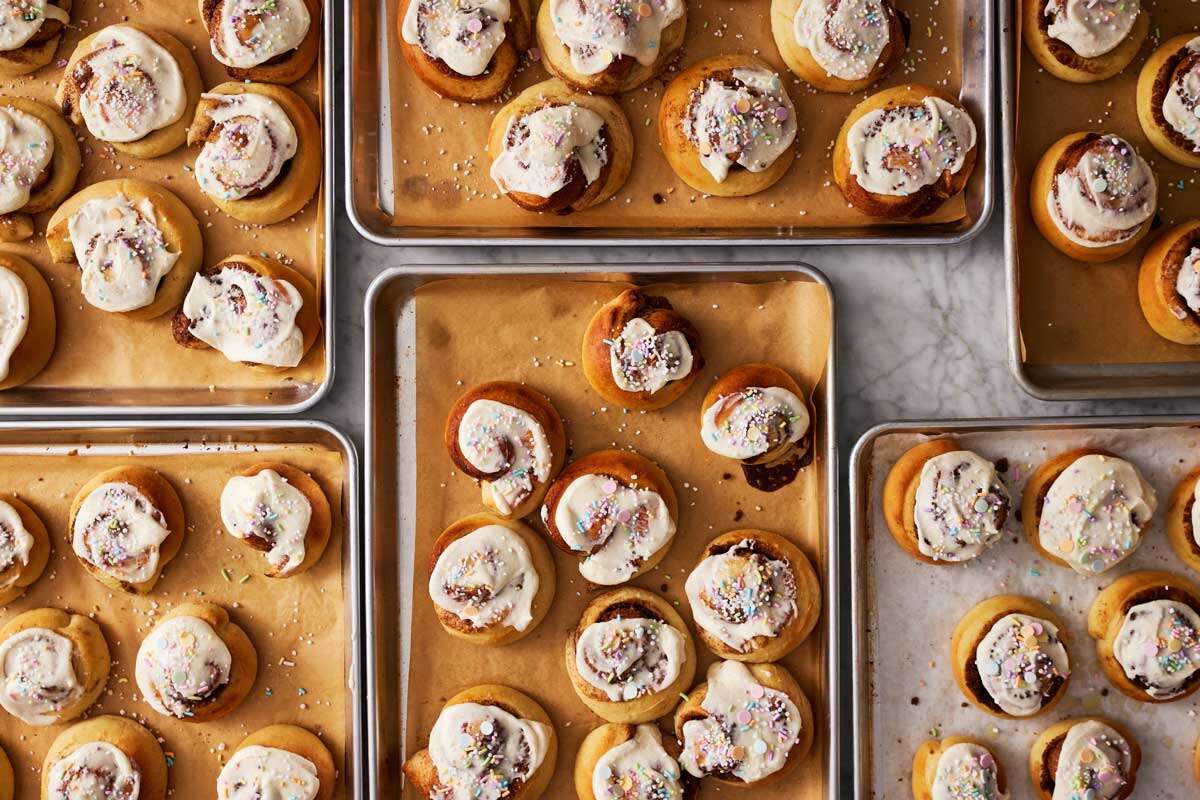 Now that I had all my decorated rolls, it was time to assemble my tower. If you’d like, you can use graduated serving stands for this. (You’ll often see them being used to make food easily accessible at large events.) I created my own tiered stand by mixing and matching different cake stands and platters I owned, taking care that they were each centered as I built up. Use stands with a wide base to ensure sturdiness.

What’s cool about making a tower in this way is that its concept is customizable — you can build a two-tier, three-tier, or four-tier tower just as easily as this massive one!

Once I stacked my stands, all that was left was to add the cinnamon rolls. The beauty of this presentation is you can be very precise, neatly stacking the rolls — or you can really just pile them on! Start by filling the bottom tier to your liking, then work your way up. I even used an individual cupcake stand as the top “tier” so I could finish the whole thing off with one perfect cinnamon roll! 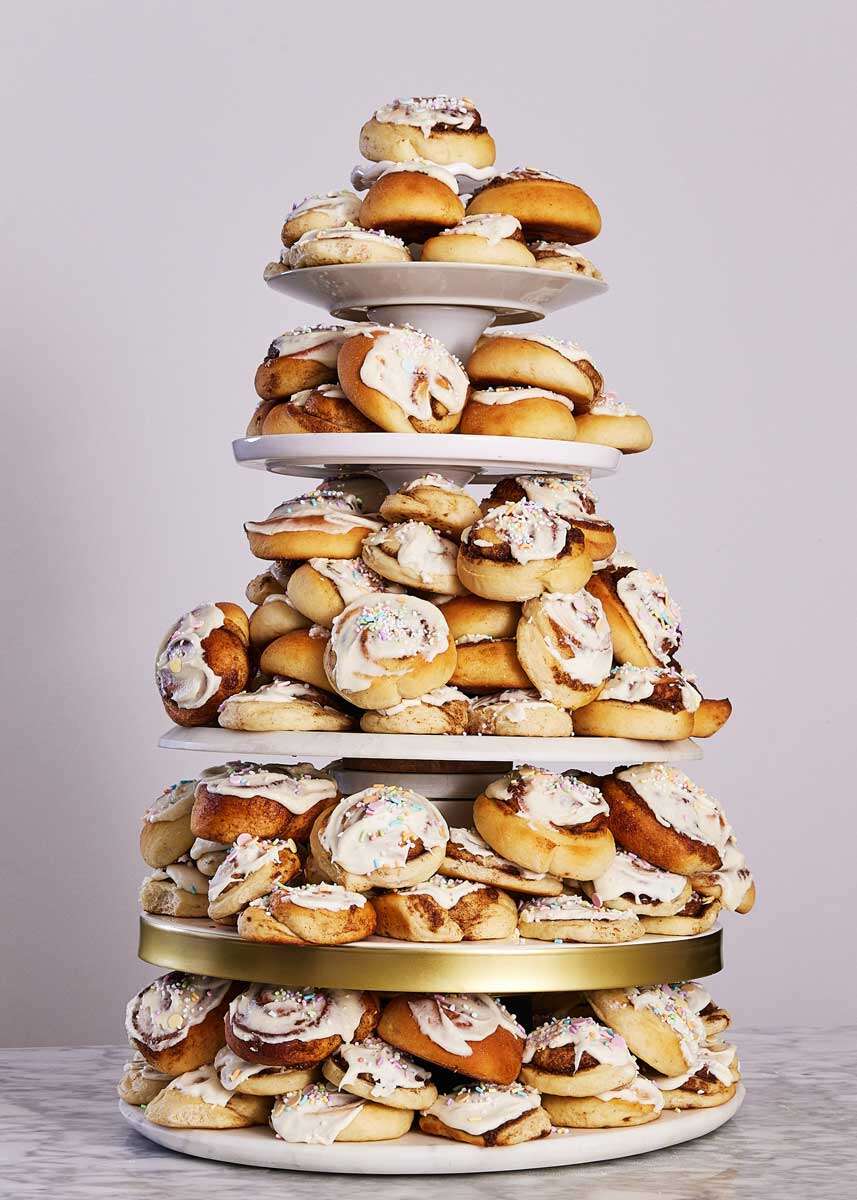 After I assembled the tower, basked in its glory (and oh, was it ever glorious), and sampled a roll (OK ... maybe two), it was time to spread the love! We boxed up all the rolls in bakery boxes for neighbors galore, then sent up the buttery bat signal to let them know that so much goodness was headed their way (with contact-free delivery, no less).

As much as I love cake, I also enjoy getting celebratory with all my favorite bakes, like these Perfectly Pillowy Cinnamon Rolls! There’s so much to love about soft, pillowy dough evenly swirled with cinnamon, basted in butter, and swooped with icing. Needless to say, I’ll be dreaming of this cinnamon roll tower for a long time to come.

Ready to make your own tower? See these 10 genius tips to bake Perfectly Pillowy Cinnamon Rolls for extra guidance before you start baking. 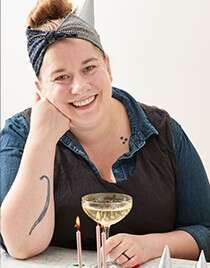 Erin Jeanne McDowell grew up in Kansas amidst a food-obsessed family. She landed her first (after-school) job in a bakery, and was hooked! After pastry school in New York's Hudson Valley, she combined her love of baking with her desire to share ideas, recipes, and techniques with other bakers. She w...
View all by Erin McDowell

How early can I make these to serve tomorrow for breakfast?

Hi Julie! We recommend making and baking the rolls the day before you want to serve them. They'll stay wonderfully soft for at least 3 days, and we've found the best way to enjoy them for breakfast is to bake them the day before, store them tightly sealed (and un-iced) at room temperature overnight, then the next morning lightly cover the rolls with foil and warm them in a 300°F to 350°F oven for 5 to 10 minutes before spreading with icing. We hope this helps and happy baking!

Hello Julie,
If I want nice fresh from the oven cinnamon rolls for breakfast, I make the dough the night before. Then I refrigerate the dough in a tightly covered container with some "headroom" since the dough will rise, but slowly.
In the morning, it is easy to take the dough from the to warm up a bit while I get the ingredients for the filling and the pans ready.
It is simple to shape the rolls, let them proof in the pans, and bake. Allow yourself time for the prep and baking, depending on how much dough you need to shape and bake.
Cinnamon rolls will keep a few days, but these fluffy sweet rolls are always best fresh out of the oven!
Happy Baking!