Each year, King Arthur Flour awards two scholarships to bakers making an impact in their communities. We recently invited Dayna Evans to a three-day sourdough class at our Baking School – and to share the incredible work she’s doing through Permanent Bake Sale. This is her story.

When I started Permanent Bake Sale in early 2017, I had no idea what I was doing. No, really. I had no idea. The initiative’s purpose was twofold: to raise money for causes and grassroots organizations that I cared about, while also learning somewhere along the way how to make good bread.

Every week, I’d make sourdough bread at home, sell the loaves to friends through an Instagram account, then donate the proceeds at the end of the month to causes I supported. I wanted to get better at baking while giving back in some way, and it seemed like the weekly practice of making and selling bread was one surefire way to do that.

I would always describe it as a “win-win-win.” People got to eat bread; I got to make bread; and together, we were raising money for immigrants' rights, victims of sexual violence, incarcerated people, and climate change activists.

I got into bread because of my partner, who had taken an interest in sourdough the previous year. Soon after I made my first loaf, I became obsessed. I was baking bread at least once a week, sometimes more, and suddenly we had more bread than we knew what to do with.

A friend suggested I start selling it. I didn’t like the idea of taking money from friends when I’d happily give them bread for free, so I thought: why not take the money (minus the cost of flour) and donate it? I never in a million years thought this small little spark would take off. I just figured I would raise a few dollars here and there, make bread every so often, and that would be that. Maybe in a year, I’d know how to shape my bread a little better and would have helped give back in a small way.

Permanent Bake Sale became something bigger than I’d ever imagined. People bought bread every week, and I’d always sell out.

Over the course of two years, we also held four in-person bake sales, where people could buy the bread and other goodies from neighbors at our favorite local coffee shop in Brooklyn.

In under two years, to my absolute disbelief, Permanent Bake Sale had raised more than $20,000. We gave that money back to organizations like Sunrise Movement; the Rape, Abuse & Incest National Network; Black Women’s Blueprint; The National Bail-Out Collective; Women in Need NYC; The Sylvia Rivera Law Project; and about a half-dozen others.

What had started as a small hobby had become — with the help and support of so many people — so much more. Eventually I turned it into a collective, and I wrote up a guidebook so people could launch their own Permanent Bake Sale in their community.

The Bake for Good Scholarship

When I heard that I’d been awarded the Bake for Good Scholarship by King Arthur Flour, I was a little stunned. This tiny little engine was getting recognized in a big way. I still had my day job. My partner and I were working a lot outside of work hours to keep Permanent Bake Sale alive. It was always a challenge to keep doing it (albeit an extremely rewarding one), so to hear that I would get to bake bread with King Arthur Flour was amazing.

The scholarship meant that I could take bread classes at King Arthur’s Baking School in Vermont or in Washington state. I knew immediately I wanted to go to the Washington school. That branch is part of the Bread Lab at Washington State University, where regional grains and heritage wheats are studied, cataloged, and bred by a team of experts led by Stephen Jones. I’d heard so much about the Bread Lab and always wanted to visit.

Starting class felt a little bit like the first day of school. I was nervous. Would I fit in with my classmates? Would I know what I was doing? Would I accidentally knock a tub of flour onto the ground and make a huge scene?

I woke up at an ungodly early hour to shake off some of the jitters. What if everything I’d been doing in the kitchen for the last two years had been embarrassingly wrong?

The Baking School at the Bread Lab is tucked away on a side street in a maze of wide country roads that run through the Skagit Valley’s beautiful farmlands. The lab itself is humble: it’s no mega-complex bio-dome with hundreds of scientists in lab coats, which is what I’d been imagining. But while it is small, it is — a little bit like Permanent Bake Sale — mighty. Its several rooms are home to some of the most advanced equipment available to study wheat, flour, and grains.

The King Arthur Flour Baking School occupies a large room in the lab. Each butcher-block table was set up with cherry-red stand mixers, tubs of different kinds of flour, and all the ingredients you could ever need to make the 10 kinds of bread we would tackle over the three days.

It didn’t take long to learn that I had no reason to be nervous. My instructor, Geoff Hicks, and my fellow classmates were easy to talk to and laid-back, and best of all, they were all just as interested in bread as I am. 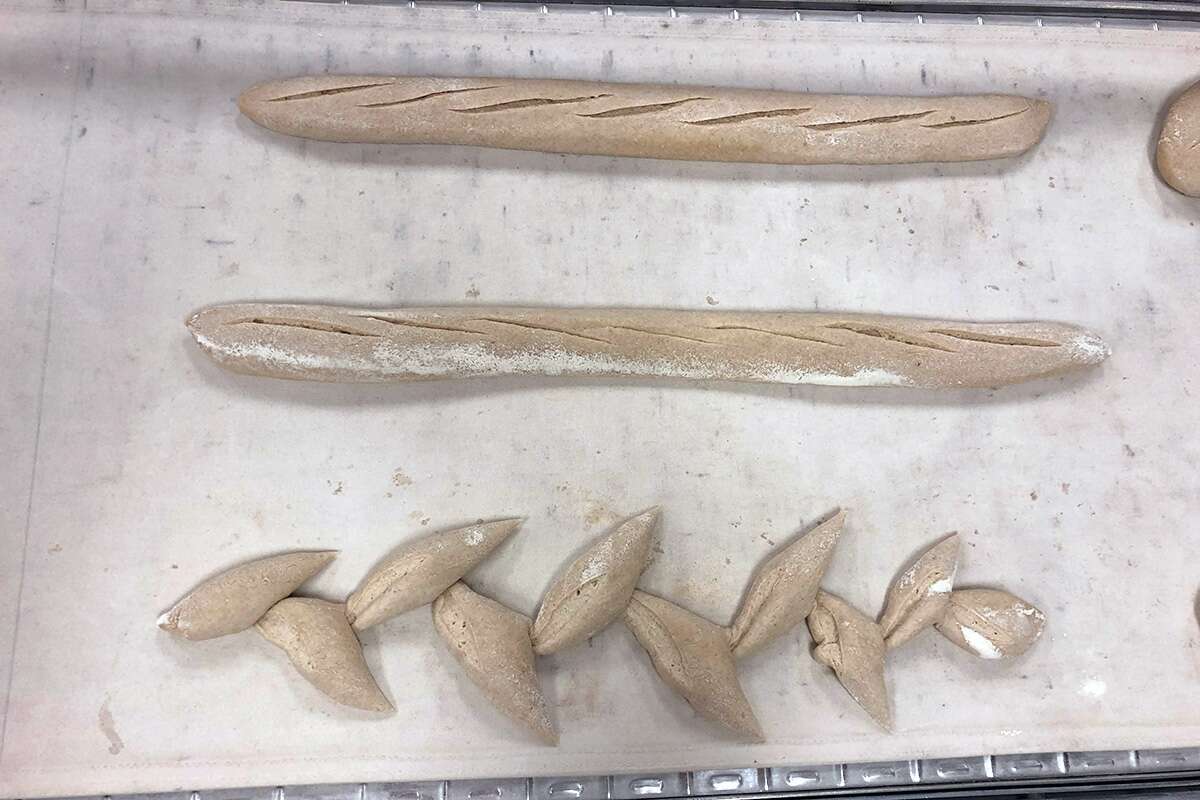 Over three days of classes, we worked through every recipe and every technique for sourdough bread that you can imagine (OK, not all of them, but a lot). After years of kind of making it up as I went along, I felt like I finally mastered batard shaping. We threw sourdough starter into a quick-and-easy cracker dough and made the most delicious gourmet Cheez-Its.

We learned how to use deck ovens, how to dry out sourdough starter when you want to travel with it, when to add mix-ins to dough, and so much more. I took pages of notes. In all caps, I made sure to write “RYE IS NOT WHEAT” at the top of my notes, just in case I forgot.

Though I’m not sure bakers’ math will ever come as easily to me as it does to Geoff, learning how to calculate percentages and temperatures of ingredients so that you could make bread — theoretically — in any environment has already changed how I think about baking. At the end, we were each given a certificate of completion. I display it proudly in my home. 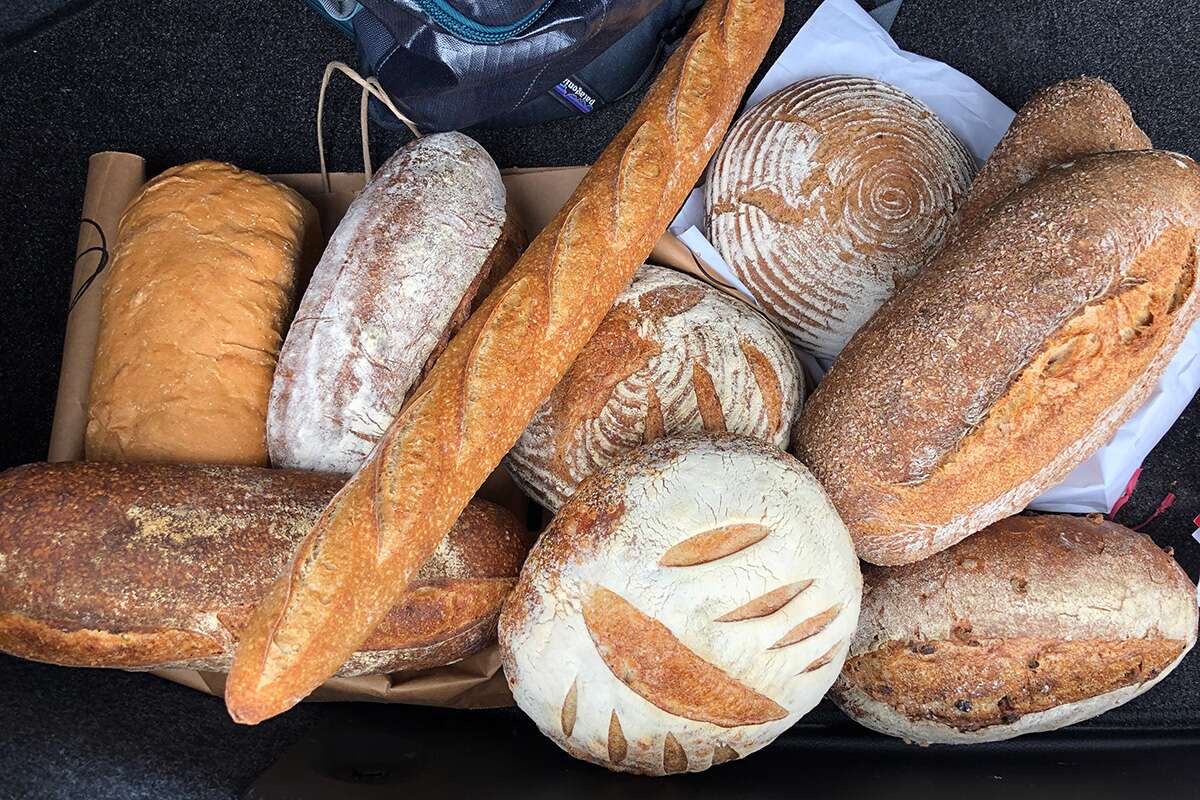 When it was time to go back to New York, I took my two enormous bags of bread and said goodbye to my classmates. At the airport, I was certain that my bread would be apprehended at security, but no one seemed to care that I was carrying nine loaves of bread and one baguette in my backpack. So I came back to New York with a bag stuffed to the brim with all the work I’d done at the Bread Lab.

At a party that I hosted that weekend, we sliced up all the bread, put out pats of butter and salt, and fed my friends with it. It felt like a homecoming for what had brought me to Washington in the first place: an opportunity to give back to my community with a thing that I loved so deeply.

And in only a few hours, all nine loaves were gone.

If you're interested in learning more details about classes at our Baking School, please see the class calendar. 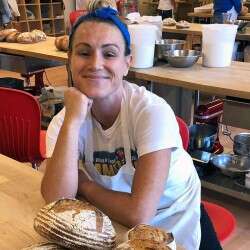 2019 Bake for Good scholarship winner Dayna Evans is a freelance writer currently based in Paris. She launched Permanent Bake Sale in 2017.

View all by Dayna Evans

A bread tasting party???? What an awesome idea. Love that you do so much good with your baking.

Your story is so inspiring! And timely ... I was just wondering how I could possibly bake as much as I wanted to without my husband and I leaving loaves of bread on neighbors’ doorsteps. Thank you.

Such a wonderful and inspiring story, something I've always wanted to do. Thank you for sharing!

I wish I was able to ready this article or any article on the site. You see, the font choice is terrible on mobile. Leave it to a designer...:)

Hi there! It's actually quite simple to adjust your display font settings on most mobile devices. We're not sure what kind of phone or tablet you're using, but if you Google "how to increase font size on [type of device]," the instructions should pop right up. Happy baking!

Oh...this is such a great idea! It is exactly what I want to do. While I've toyed with the idea of opening a restaurant/bakery, it's hard for me to make the financial and time commitment right now. But baking for a cause I can do. Thanks for the inspiration!

What a lovely story!