How to substitute for buttermilk

You cast your eyes over the list of ingredients in this new recipe you’re trying and lo and behold, there’s that darned buttermilk. You don’t have any buttermilk; in fact, you never buy buttermilk because there are very few baking recipes that use it and who wants an almost-full quart of buttermilk sitting in the back of the fridge making you feel guilty for contributing to food waste? So you sigh and turn to another recipe: one without buttermilk. But is there an easy substitute for buttermilk — something you already have in your kitchen? 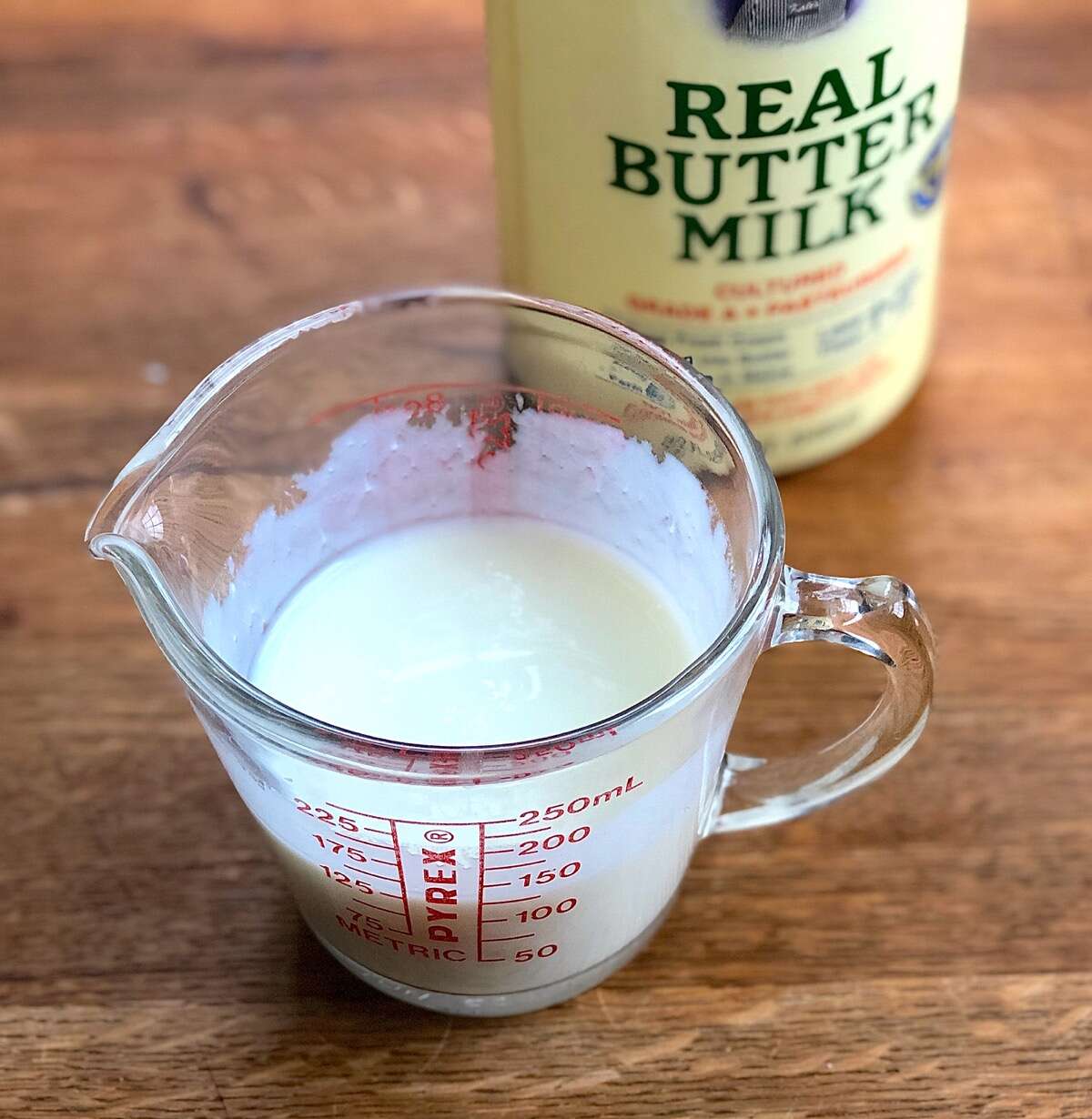 First, let’s clarify what buttermilk is, exactly. Traditional buttermilk is the thin, watery liquid left over after cream is churned into butter. It’s not commonly available in grocery stores — and hasn't been since the 1920s, when it was supplanted by our present-day cultured buttermilk, low-fat or skim milk that’s been inoculated with milk-friendly bacteria to thicken it and make it sour.

Many of the recipes you see calling for buttermilk are classics: pancakes, biscuits, cake. Buttermilk was a readily available ingredient (and one not to be wasted) back when butter-making was a common household task. Prized for its leavening ability when paired with baking soda, it was the basis of many a light and fluffy pancake and cloud-like biscuit.

Today, buttermilk isn’t a pantry staple for most of us, but rather something you purchase for one particular recipe. Which brings us back to where we started: If you don’t want to buy a quart of buttermilk, what can you substitute?

Here are the most common suggestions:

Best substitute for buttermilk: The tests

I decided to try several of these options in pancakes, biscuits, and a favorite buttermilk cake.

First off, I eliminate kefir (not a pantry staple) and sour cream (similar enough to Greek yogurt).

I also cross standard yogurt off the list, because how easy is it to find “un-Greek” yogurt these days? Scanning the shelves in my local supermarket I find one small section of plain yogurt — in quart-sized containers. Heck, I might as well buy a quart of buttermilk as plain yogurt.

But thick Greek yogurt — it’s ubiquitous. And many of you probably keep a container or two in your fridge most of the time for snacking, mixing with granola, or whipping up a smoothie.

From previous pancake experiments in our test kitchen, I know that Greek yogurt mixed 1:2 with 1% or skim milk (one part yogurt, two parts milk) yields the best results. It's also an easy ratio: mix one small container (5.3 ounces) of Greek yogurt with 1 1/3 cups of milk to yield 2 cups of buttermilk substitute.

So I test milk with vinegar, milk with cream of tartar, and thinned Greek yogurt against the control: buttermilk. While I'm at it, I take a step back and decide to test the easiest substitution of all: plain 1% milk in place of buttermilk.

Let's look at the results. 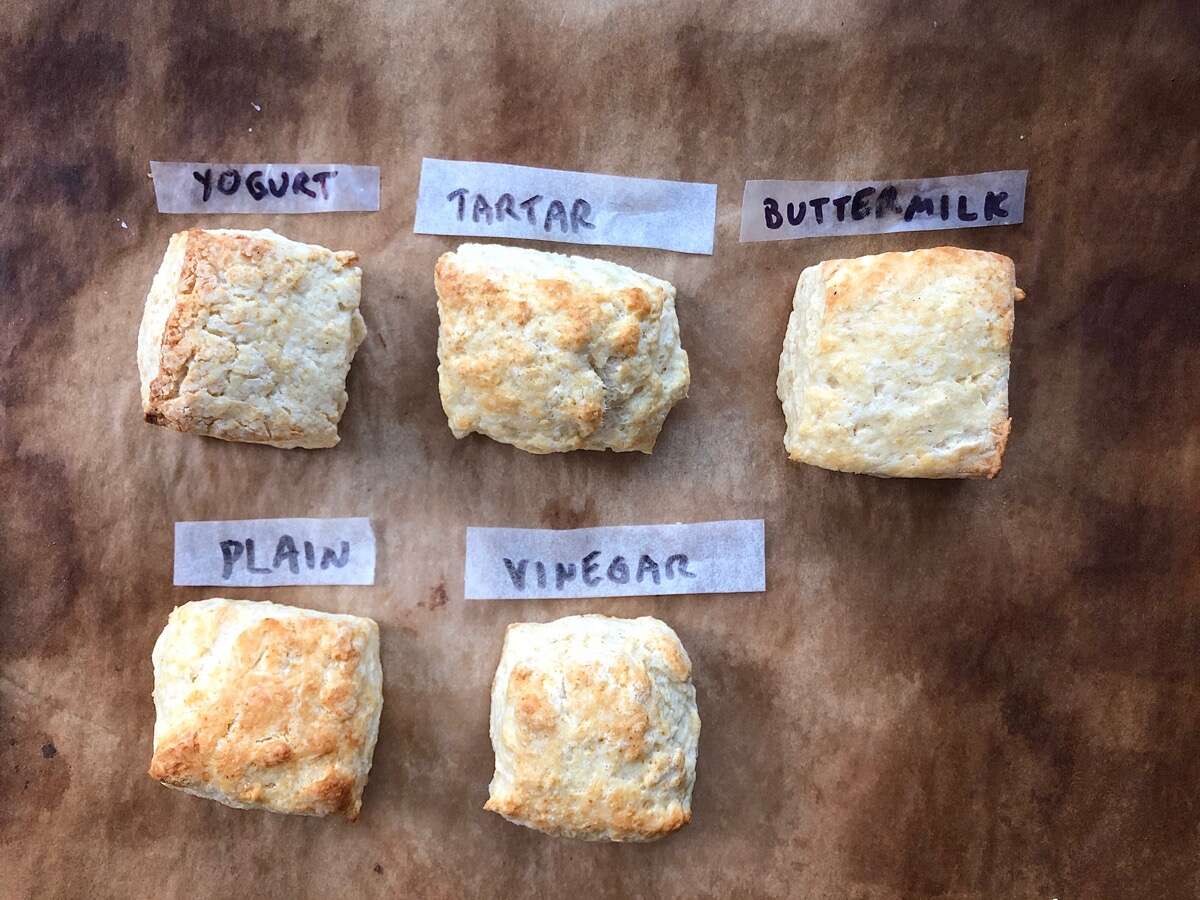 What to substitute for buttermilk in biscuits

My first test, Baking Powder Biscuits, turns out to be a harbinger of things to come: all of the biscuits rise nicely and brown well. On sampling, their texture is the same — but the flavor of the buttermilk biscuits is best, a slight tang mixed with a hint of sweetness (is it the milk solids?). The yogurt biscuits taste almost as good. The vinegar and cream of tartar biscuits seem to lack depth of flavor, while the plain milk biscuit simply tastes flat. 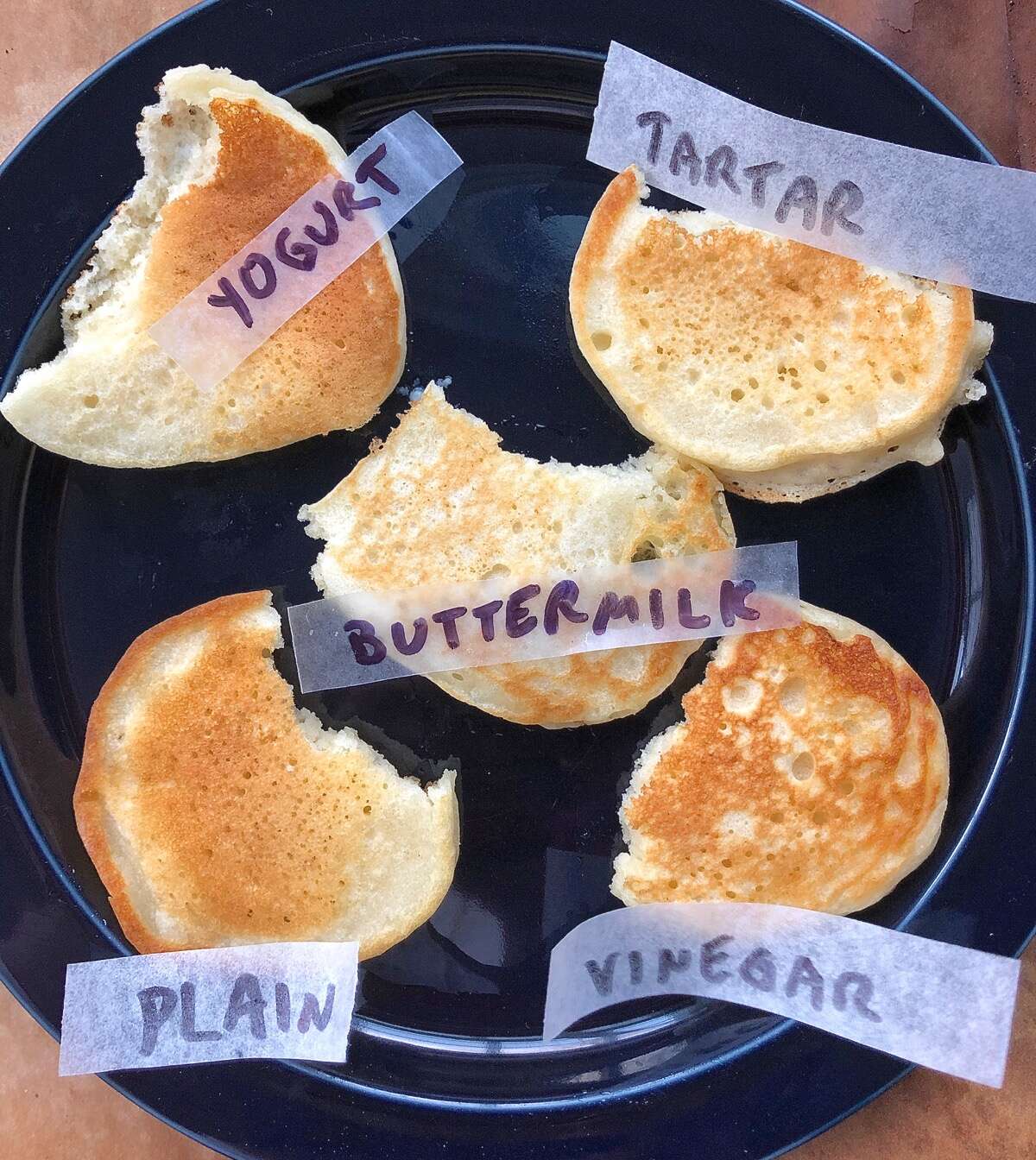 What to substitute for buttermilk in pancakes

Substituting anything for buttermilk in Buttermilk Pancakes certainly belies the recipe's name. But aside from that, I notice results very similar to the biscuit experiment. The texture and browning of each of the pancake batches are similar — with the exception of the plain milk pancake, which rises less. But when it comes to flavor, the buttermilk and yogurt pancakes are neck and neck, with the others lagging slightly behind. 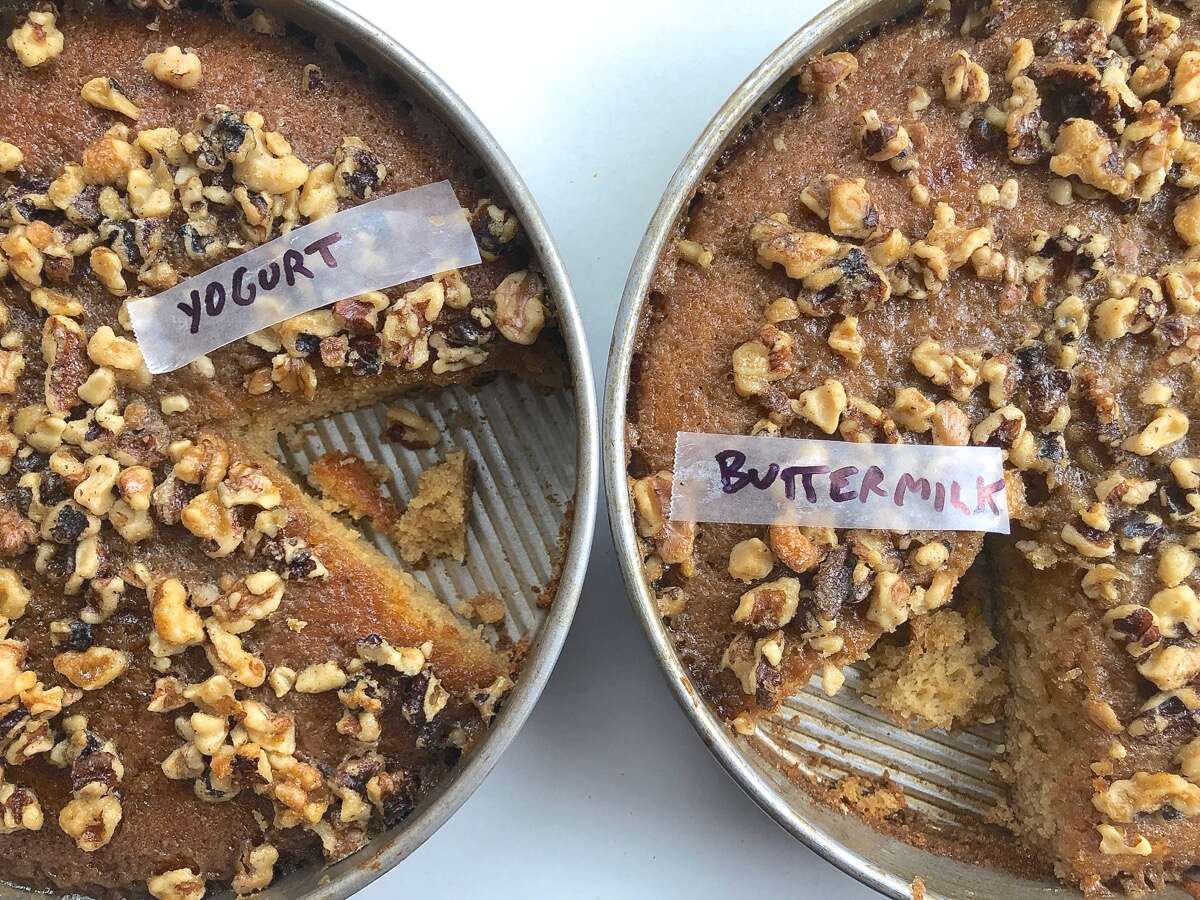 What to substitute for buttermilk in cake

This Farmhouse Buttermilk Cake recipe is an old favorite of mine. The photo above doesn't do it justice; I was out of pecans so substituted walnuts, and then didn't chop them finely enough (rush, rush!). But this tender, golden cake, topped with its buttery, nut-laden syrup, is a true crowd-pleaser.

Compared to biscuits and pancakes, with their simple ingredients, this cake is complex: brown sugar, butter, vanilla, and nuts all contribute to the flavor profile. And because of that, the subtle, layered flavor of buttermilk in the cake is lost; you'll do just as well using any of the substitutes.

That is, with the exception of plain 1% milk. This old-fashioned cake is leavened with baking soda. Using plain milk, which lacks buttermilk's acidity, results in a darker-colored, denser cake. 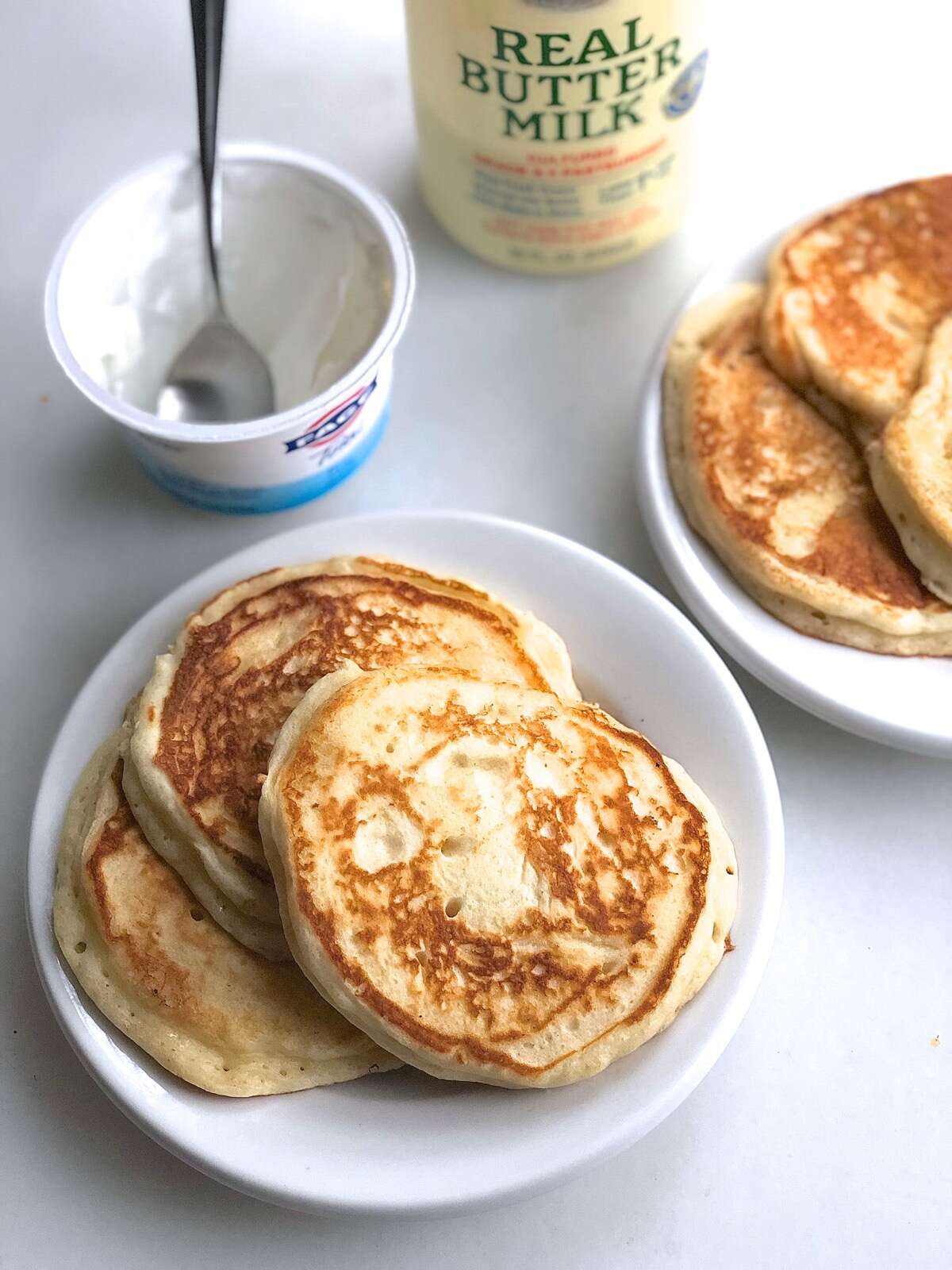 How to substitute for buttermilk: Your takeaways

One last note about liquid buttermilk: If you buy a quart and don't use it up, you can always freeze it in 1/2-cup (or your preferred size) portions. It'll probably separate when you thaw it, but no worries; it's fine to use.

Now, what about dried buttermilk powder? I didn't include it in my testing results as, again, it's not an ingredient you'd likely stock in your pantry on a regular basis (unless you're an inveterate buttermilk baker). But it works as well as the "soured milk" options (milk + vinegar or cream of tartar). While lacking real buttermilk's rich flavor, it does react well with leaveners and help provide a good rise.

Speaking of biscuits, my fellow blogger Kye did a comprehensive test of different fat/liquid combinations in biscuits. (Spoiler alert: Her favorite biscuits include butter and buttermilk). For Kye's complete results, see Fats and liquids in biscuits: choosing your favorite texture.

I love buttermilk. I freeze it in 1 cup for baking and 1/2 cup for marinade. Freeze flat for easy thawing. Works great.

Hi there. Wondering--what about liquid whey left over from greek yogurt? Can that be used?

Hi Sher, PJ did mention liquid whey as a substitute for buttermilk in an earlier blog post, so I suspect this would also work fine.

Is there a good non-dairy substitute for buttermilk in Irish soda bread? I can't digest dairy milk or yogurt-- even if it's lactose-free.

Hi Eleanor, you can generally make a dairy-free version of buttermilk by adding 1 tablespoon vinegar or lemon juice per cup of non-dairy milk. Allow to sit for about 5 minutes before adding to your recipe. For more information on baking dairy-free, check out this blog post.

Yes, I’d like to try that for my wife who is avoiding dairy.

Buttermilk tastes incredibly good and refreshing served cold…just add salt, pepper and roasted cumin powder with torn up mint or cilantro leaves. It’s wonderful for digestion and helps with acidity and bloating. Try it! You won’t ever need to discard leftovers.

Thank you for some good information. I must say though I am disappointed that your article got me super excited that maybe, just maybe, kefir can be used as a buttermilk substitute! I eat it on work mornings in my cereal or take a jar of it to drink as a snack. You don't even need a spoon! It is so convenient! And tasty! But then, the author immediately wrote off kefir because it wasn't a staple... I was so sad and let down... I would have preferred she didn't say anything at all about it if she was not going to test it for us. As my folks would say to me growing up, I'm not mad, just disappointed 🤭

Sounds like kefir might work just fine. Give it a try - you can be your own test panel!

How long will liquid buttermilk keep opened and unopened in the fridge? My mom says it will keep a long time, but lose its tanginess.
I end up constantly buying it and having too many containers because I am just not sure.

Why you should be keeping dried buttermilk in your pantry

Not only is the shelf-stable powder convenient – it’s also great for baking.