I love to spend time sifting through our recipe archives, searching for hidden gems and forgotten classics. This is how I discovered our Chocolate Caramel Almond Crunch Brownies, and I'm tremendously happy that I did. Our recipe archives house decades worth of baked goods from all manner of places like King Arthur cookbooks, the old Baking Sheet, our bakery, the test kitchen, and employees' own kitchens. They're rich in stories, but they're also rich, by which I mean packed with thousands of ideas!

Part of our mission here is to do the research to bring you the very best ones: the gems, the top-rated, the recipes that may otherwise never cross your mind. And today's recipe for Chocolate Caramel Almond Crunch Brownies checks all those boxes and then some.

At first glance, the recipe sounds over-the-top. It sounds like it'll tend towards the "decadence for novelty's sake" type of recipe. But happily, it does not.

This brownie recipe is ideal for special occasions, but also perfectly well-suited for everyday baking. It does take a bit more time than a typical one-bowl brownie recipe (if that's what you're looking for, try this quick one or use our extremely popular mix!). But the time investment is worthwhile, as the brownies are luscious and impossible to resist. (The British have a word for this exact thing: moreish, as in you keep wanting more!)

The brownies are full of contrasting texture: fudgy and moist with a creamy, fluffy frosting and a crunchy, nutty topping. Each of the three components of the recipe (brownie, frosting, and crunch topping) are excellent on their own, so you could easily make the frosting for your next layer cake or make the crunch topping to spoon over a bowl of ice cream.

Now, let's break down each part of the Chocolate Caramel Almond Crunch Brownies recipe and get to dessert! 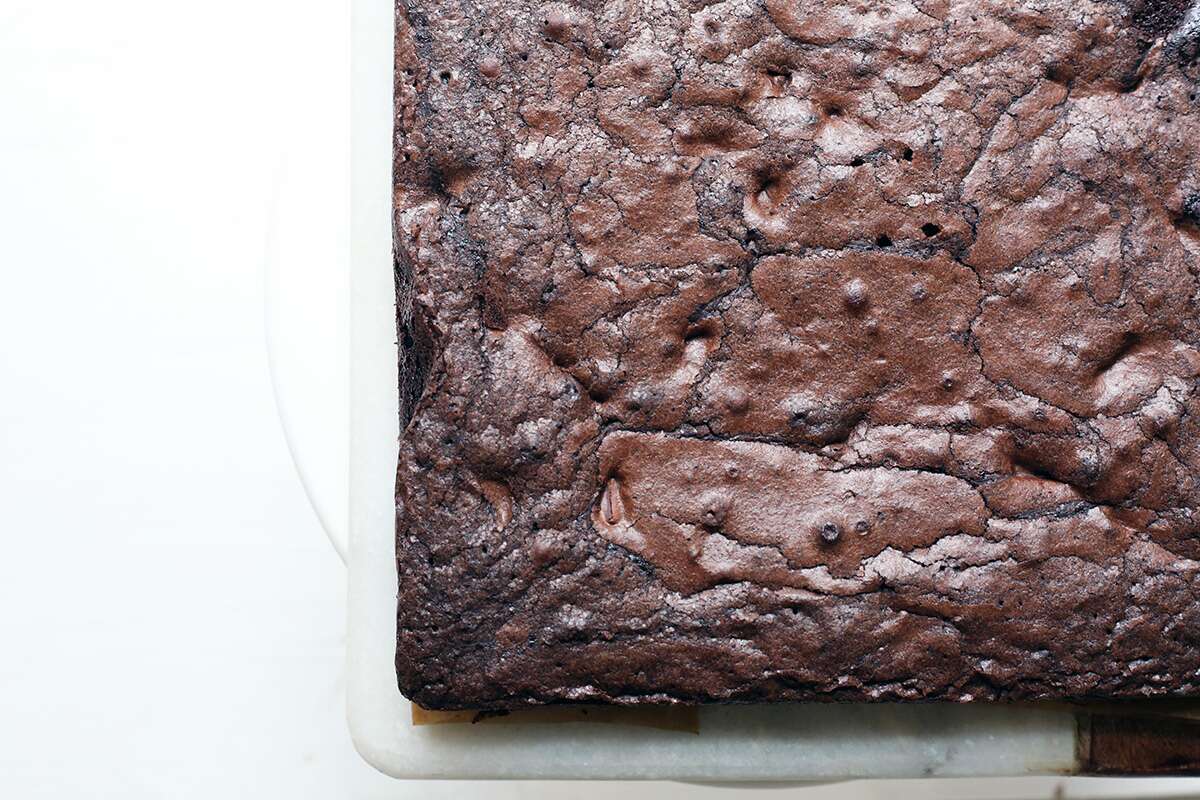 First, you'll bake a batch of brownies for the base. You can use your favorite brownie recipe, but you'll want one that makes a 9" x 13" pan of brownies. My go-to is our fudge brownie recipe. Once you bake the brownies, let them cool in the pan fully while you prepare the frosting and the topping. 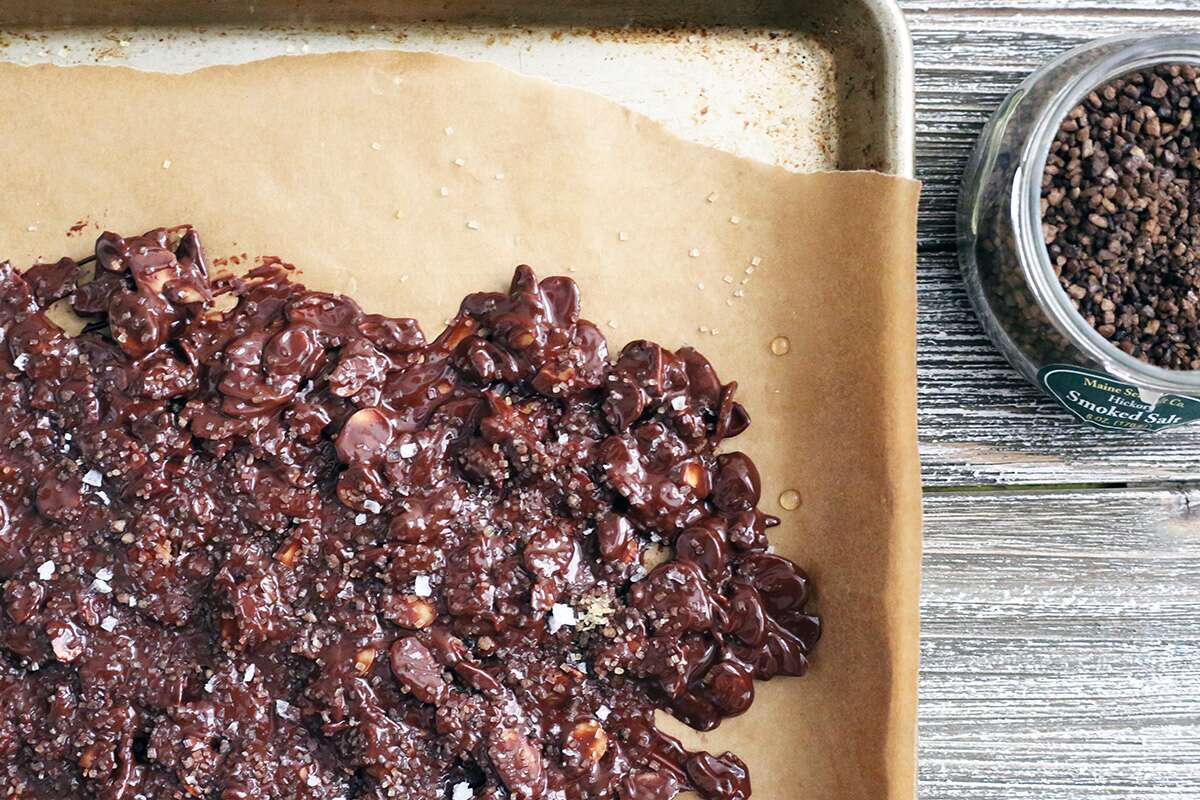 The crunch topping needs to cool for a bit, so make it before you make the frosting. If you're wise (and take it from me!), you should double the topping recipe and keep some for snacking or spooning over ice cream or crunching up into your granola. It is so good: the combination of sweet chocolate, nutty almonds, and smoky salt is utterly delicious.

The salt helps bring out the sweetness. If you don't have smoked salt, just use regular flaked sea salt. I use Maine hickory smoked salt, which I love, but a little goes a long way. 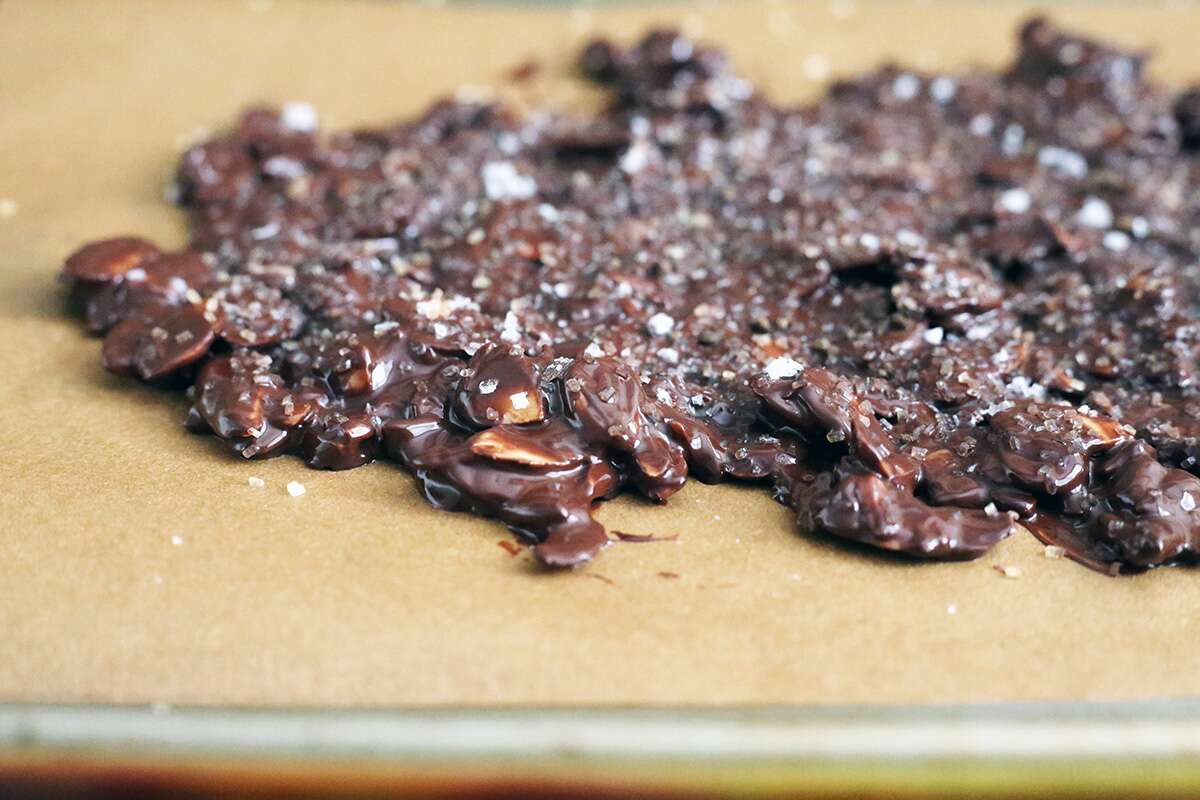 It looks fancy, but it's easy to make. Just combine melted semisweet chocolate with sliced almonds, then spread them in an even layer on a parchment-lined baking sheet to cool. Sprinkle generously with Demerara (raw) sugar and smoked sea salt (or flaked sea salt).

Don't like almonds? Use your favorite nut! Chop your nuts roughly so they aren't in big pieces.

A tip: Make sure to heat your chocolate slowly. Heating it slowly will temper the chocolate, giving it that shiny look and crisp snap once it cools.

Let it sit and it will firm up. Once cool and firm, you can chop it up into small pieces with a sharp knife, or use your hands to break it up. (I like using a knife so that it's much smaller pieces which is easier to sprinkle over the brownies.)

You can save any extra crunch topping in an airtight container for up to a week.

Brown butter is a baker's best secret ingredient. If you have never tried making it at home, drop everything and go do it! By simply cooking regular unsalted butter in a saucepan until the milk solids separate and brown, you transform a basic kitchen staple into a nutty, fragrant, flavorful ingredient that elevates baked goods.

If you've never tried your hand at making brown butter before, it's simple! It sounds fancier than it is. Just add your butter to your saucepan (it helps to use a lighter colored saucepan so you can see when the butter starts to change color), and melt it over medium heat, swirling the pan occasionally.

Keep cooking the butter: It will start to foam and bubble, and then the foaming will subside. Continue swirling the pan and you'll see the milk solids separate out and gather at the bottom of the pan. Cook for another minute or two, until the milk solids start to turn golden brown and smell nutty and fragrant.

As soon as the color turns golden, take the pan off the heat as the butter solids can burn quite quickly and we don't want that! 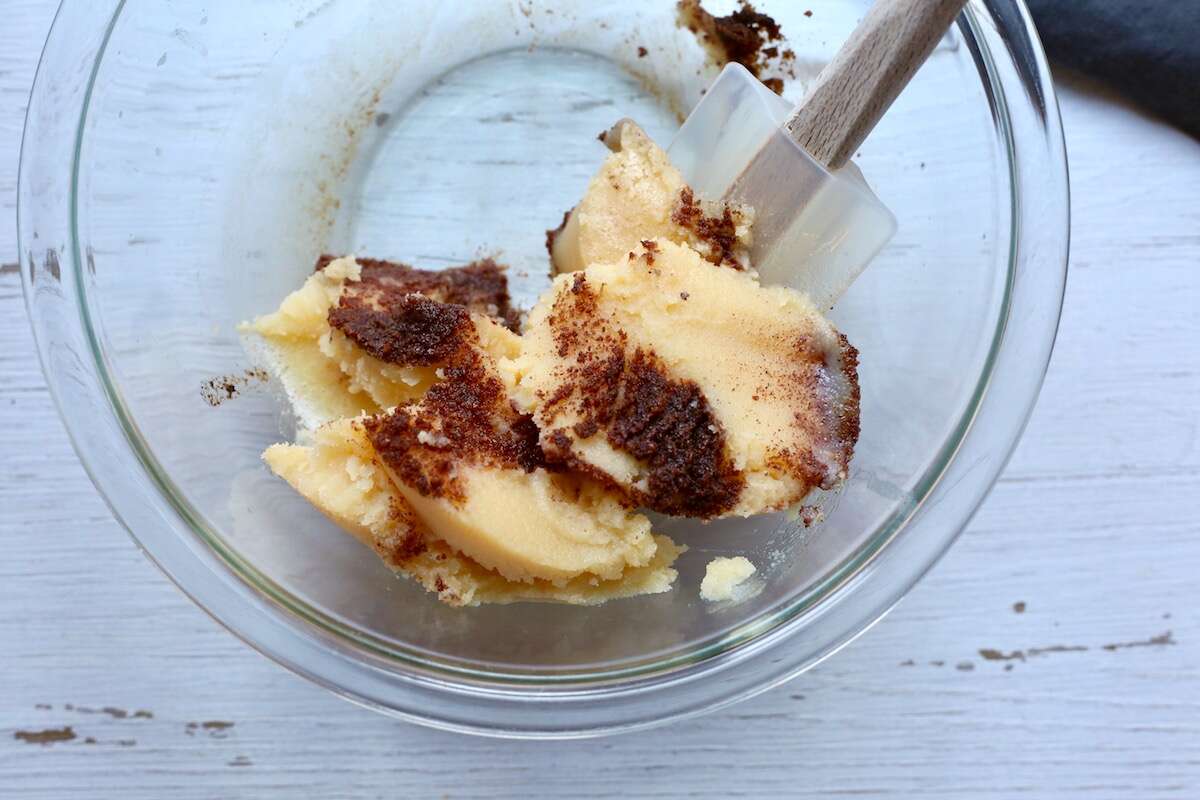 Here's a photo of cooled brown butter: You can see all the browned bits. That's what you want! 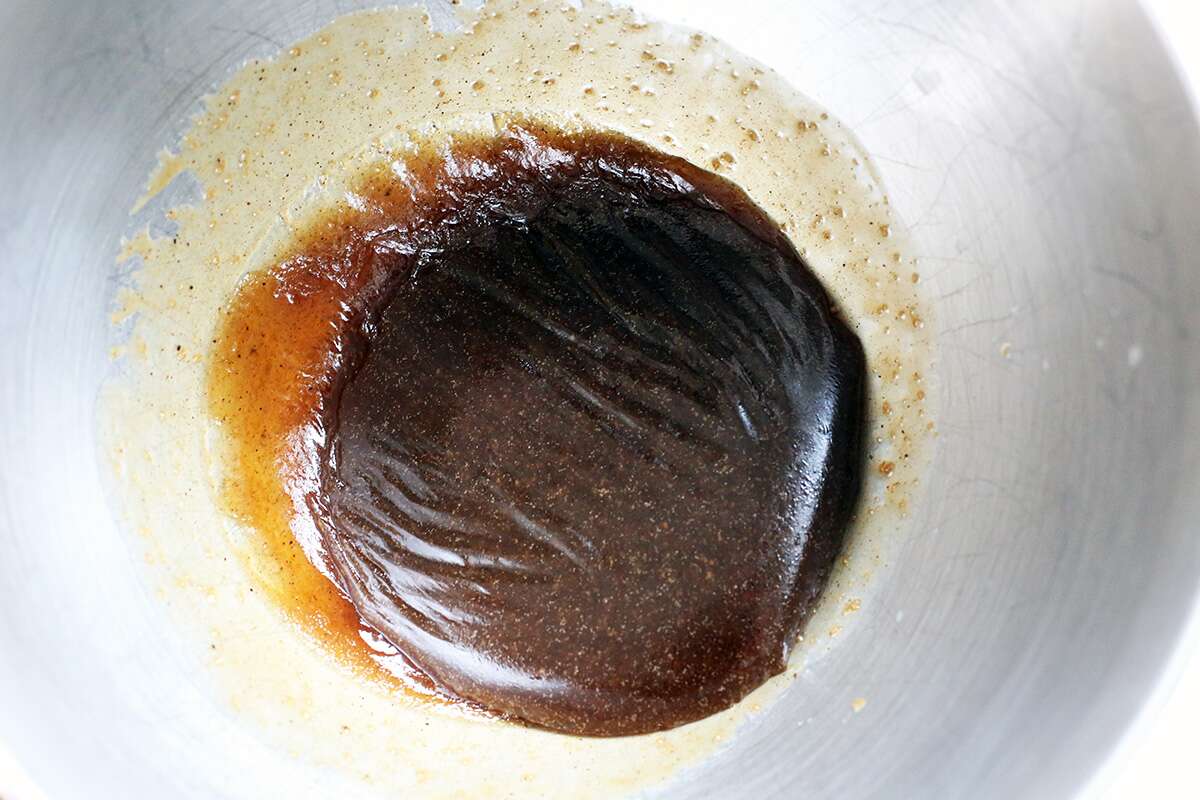 After you brown your butter, remove it from the heat and let it cool just slightly. Then add your brown sugar and salt, stirring until the sugar dissolves. 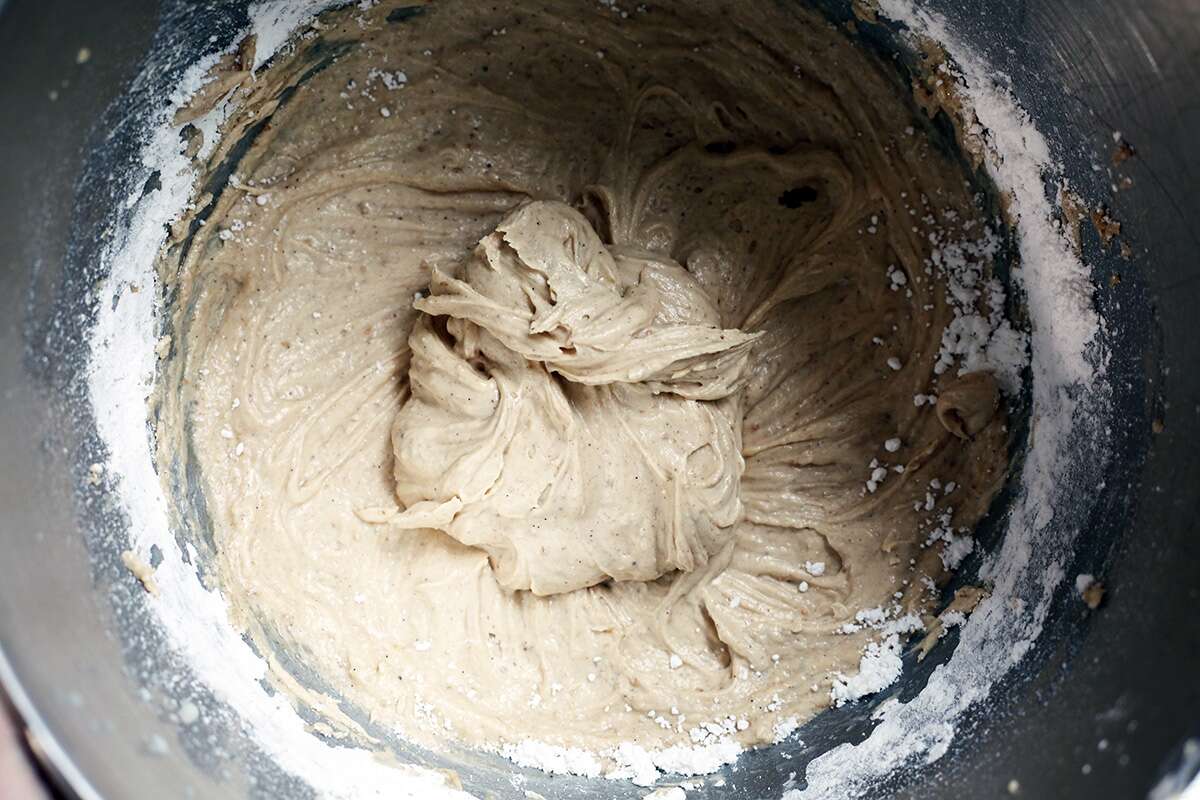 Once the sugar has dissolved, add your milk and vanilla, mixing until it forms a nice thick sauce, then let it cool before beating in confectioners' sugar until the icing turns fluffy and thick.

You can see that the finished icing has a golden caramel hue and flecks of brown butter: that's a good sign! 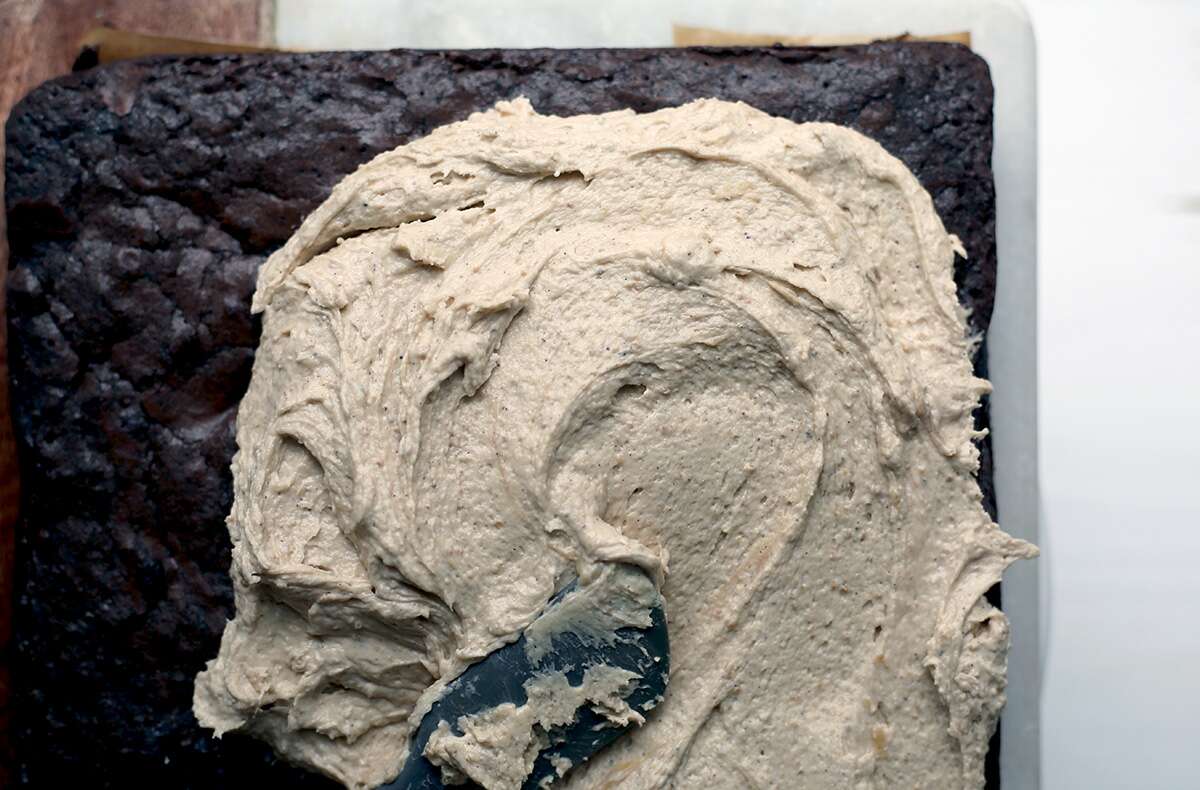 Spread your icing thickly over the cooled brownies, then top with the chocolate almond crunch. Slice into squares and serve, and prepare yourself for rave reviews. 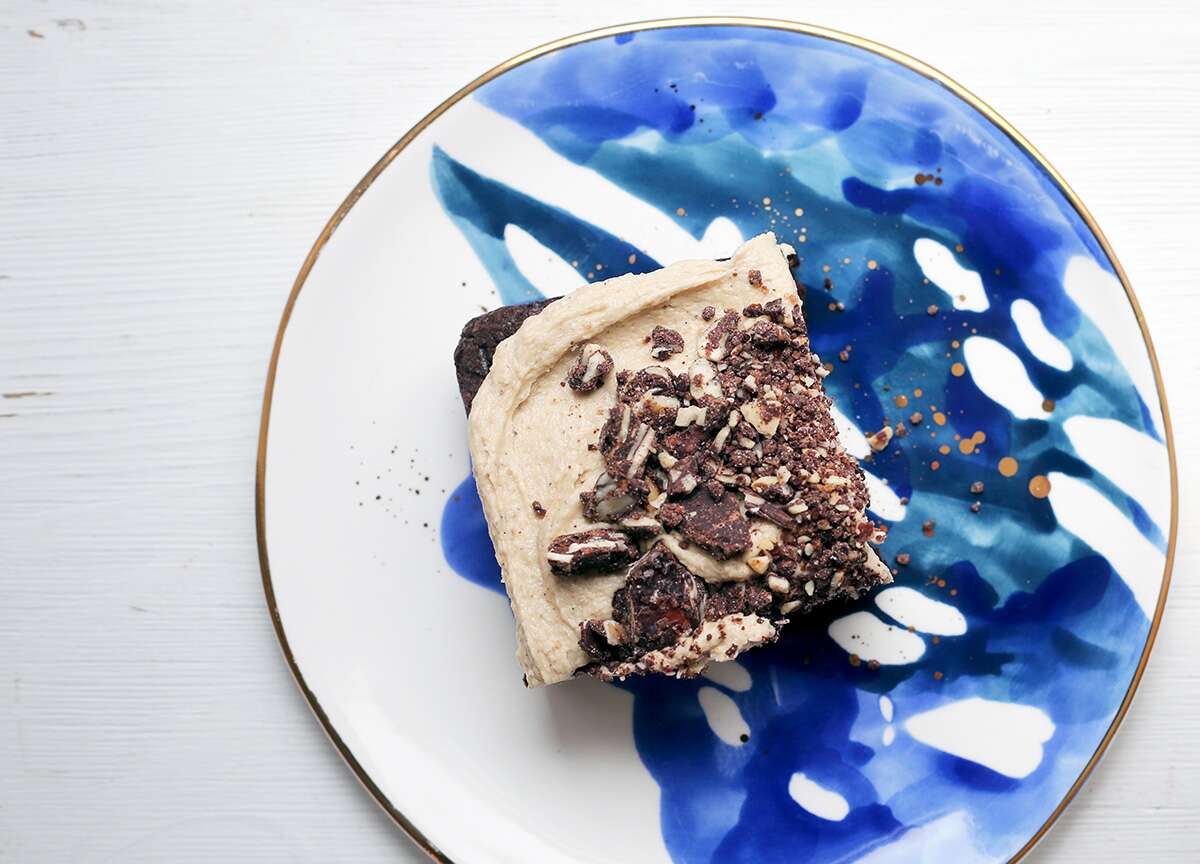 With a brownie this good, it's hard to go back to anything less elaborate, despite the time it takes. Let us know what you think of the recipe in the comments below! 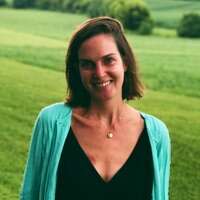 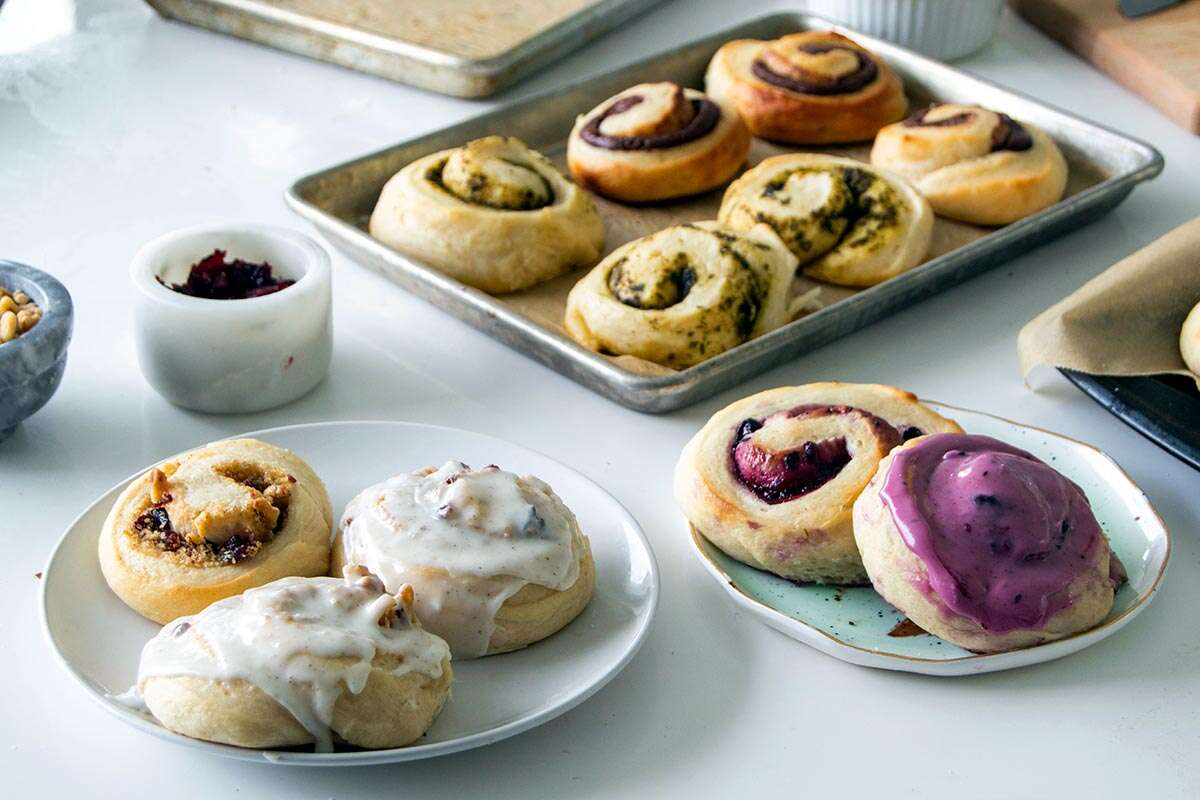 I made this for my family tonight and it got rave reviews. Perhaps the recipe changed since last year as it no longer instructs you to boil the butter with the sugar. I didn't have trouble with the browning but allowed the butter to cool too much, and the brown sugar didn't really dissolve. So the final icing was the tiniest bit gritty, but the flavor was amazing. I'll be using it again on a cake sometime I'm sure. Delish!
I had similar issues to Anna, above. The first attempt at the frosting I browned the butter beautifully, but then it took forever to come to a boil - so long that it burned before it ever came to a boil. The second batch I erred on the side of barely brown, and got there, but when I put it in the mixer, it did the graham-crumb thing. It was definitely not crystallized; I added a bit of cream and it smoothed out perfectly. Overall, they are tasty, but I would not say they are worth the effort. The brownies themselves (which are so easy!) were the best part!
I want to make this tomorrow, but since we are only two, my husband and I, and are trying to be more careful not to eat too much dessert (I know we could eat it all!!!), can we freeze it? Thank you so much, it looks divine!
If you'd like to freeze a portion of this yummy dessert, you'll want to freeze the brownies, frosting, and topping separately. The crunch topping may loose a bit of its snap upon thawing, but it will still be delicious. Freeze the components, well-wrapped, for up to one month. Happy baking! Kye@KAF
I made this recipe tonight. I had a lot of trouble with the icing portion. The suger burned the first time I made the caramel. That was my fault for not staying right on top of it. The second time the sugar started to smell on the edge of burned before it came to a boil. I went ahead and added the milk and let it cool. I added the powdered sugar in stages to my stand mixer. But the mixture looked like crushed up graham crackers. I tried adding a little water. But that just made it look like wet graham cracker crumbs. Help!
It sounds like your sugar crystallized while making the caramel, so in order to keep it smooth, you'll want to make sure that you keep the heat low after you add the brown sugar and just cook until the sugar dissolves but no longer. Good luck! -Posie
Does the sugar need to be stirred while it is coming to a boil?
The mixture does not need to be stirred while it comes to a boil. This caramel mixture is a bit more resilient than a caramel made from only sugar and water, which will crystallize if it's stirred during heating. Because there's butter added, it shouldn't make a big difference if it's stirred according to the post author, Posie. She emphasizes using low heat when the sugar is cooking to prevent it from scorching and potentially crystallizing. We hope this helps, and happy baking! Kye@KAF
I've worked with Brown Butter many times but your picture and the instructions are a bit misleading. The butter looks like you chilled it after browning but, your instructions say to add the brown sugar etc. So are we adding it while it's still hot/warm or chilling the butter first? Thanks for clearing this up.
Hi! Apologies if that was misleading -- that photo is indeed of chilled brown butter and I included it just so you could get a good visual of how browned the butter should be! But for this icing, you'll be adding the brown sugar while the butter is still warm. Enjoy!! -Posie

How to make brown butter