Happy Hanukkah! We're just about halfway through the Jewish Festival of Lights, and it's time to celebrate with a big batch of latkes Hanukkah jelly doughnuts.

That's right, this blog post isn't about latkes, Hanukkah's absolutely signature treat. I'm talking about sufganiyot – jelly doughnuts. But instead of making the strictly traditional version of these fried treats, I'm going with a cross-cultural spin that blends Mexican, French, and Jewish traditions more thoroughly than a KitchenAid mixer on high speed.

Hanukkah's traditional food focus is fried foods, chiefly latkes: potato pancakes. Which are absolutely beyond delicious: I mean, who doesn't love golden brown potato cakes, crisp on the outside and wonderfully soft within, liberally salted and eaten with sweet applesauce and sour cream?

But Hanukkah is a multiple-day celebration. Surely there's time to try another traditional holiday food.

Like these sufganiyot: round doughnuts (think doughnut holes) filled with jelly and topped with a blizzard of confectioners' sugar.

I've recently become aware of a Dunkin' Donuts creation called the "French cruller" – which turns out to be a doughnut made from French pâte à choux, rather than a classic raised (yeast) or cake doughnut.

Let's see how this works out. 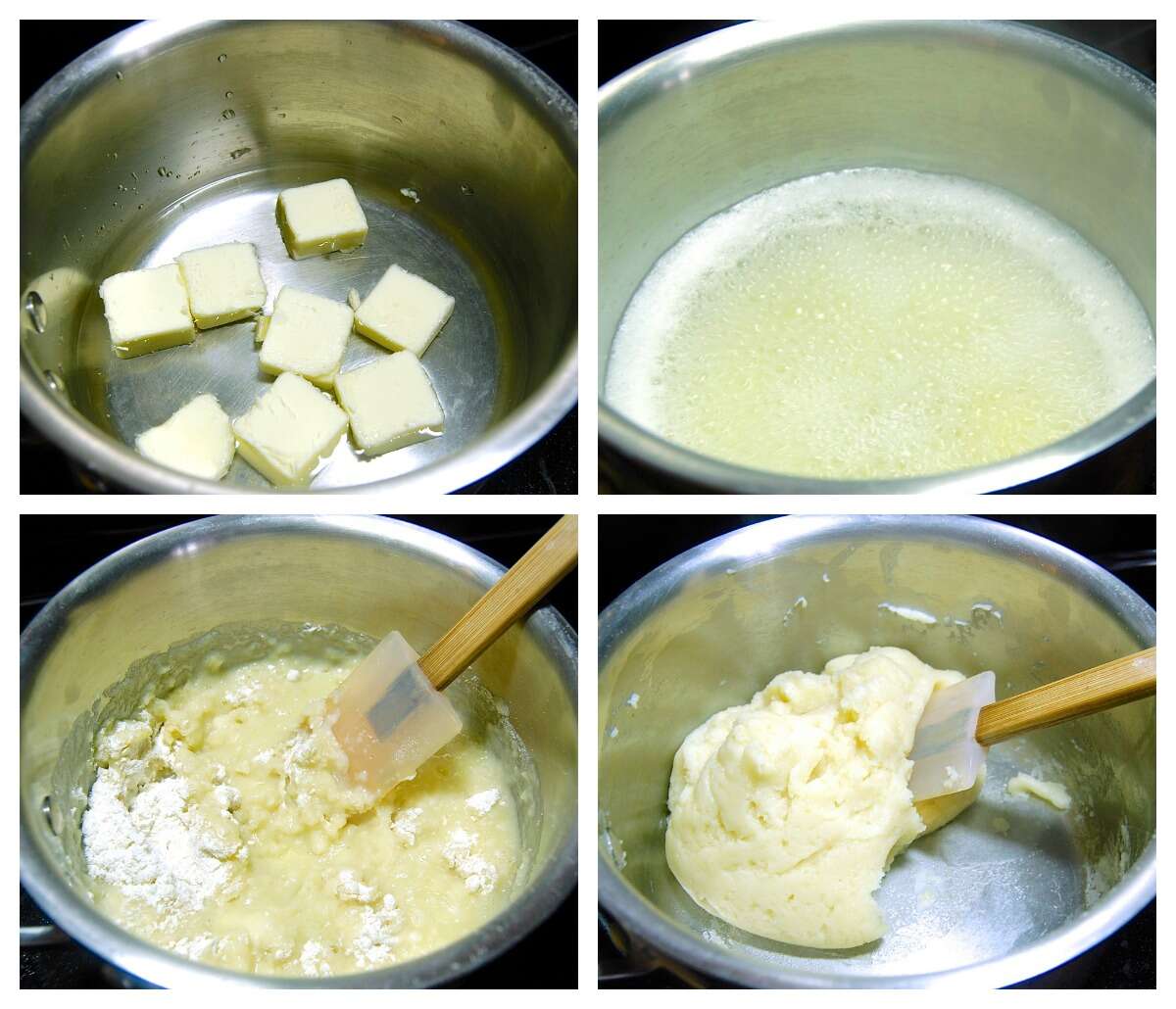 Pâte à choux is simplicity itself to make. You're going to need to bring 4 large eggs to room temperature, so take them out of the fridge before you start.

Remove the pan from the heat, and add 1 1/4 cups (149g) King Arthur Unbleached All-Purpose Flour all at once, stirring vigorously. Return the pan to the burner and cook over medium heat, stirring all the while, until the mixture smooths out and follows the spoon around the pan; this should take considerably less than a minute.

Remove the pan from the heat, and let the mixture cool for 5 to 10 minutes. It'll still feel hot, but you should be able to hold a finger in it for a few seconds. If you have a digital thermometer, the temperature should be below 125°F.

While the batter is cooling, pour a generous 4 cups vegetable oil (peanut oil preferred) into a 10" electric frying pan or heavy skillet set over a burner; the oil should be about 5/8" deep. If you use a smaller or larger pan, add oil to a depth of between 1/2" and 3/4". 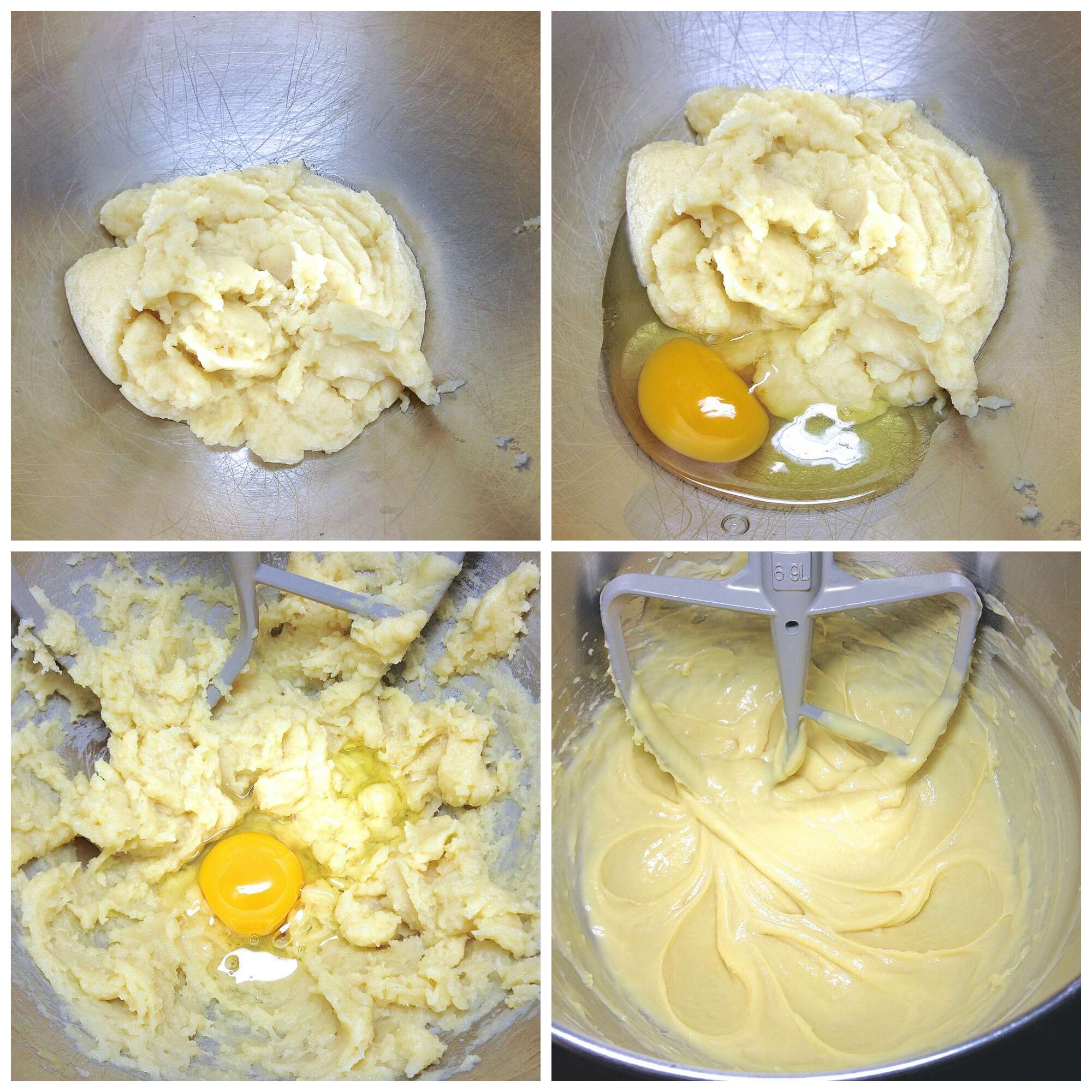 Transfer the hot dough to a mixer. Beat in the 4 eggs one at a time. The batter will look curdled at first, but when you add the last egg it should become smooth. Beat for at least 2 minutes after adding the final egg. 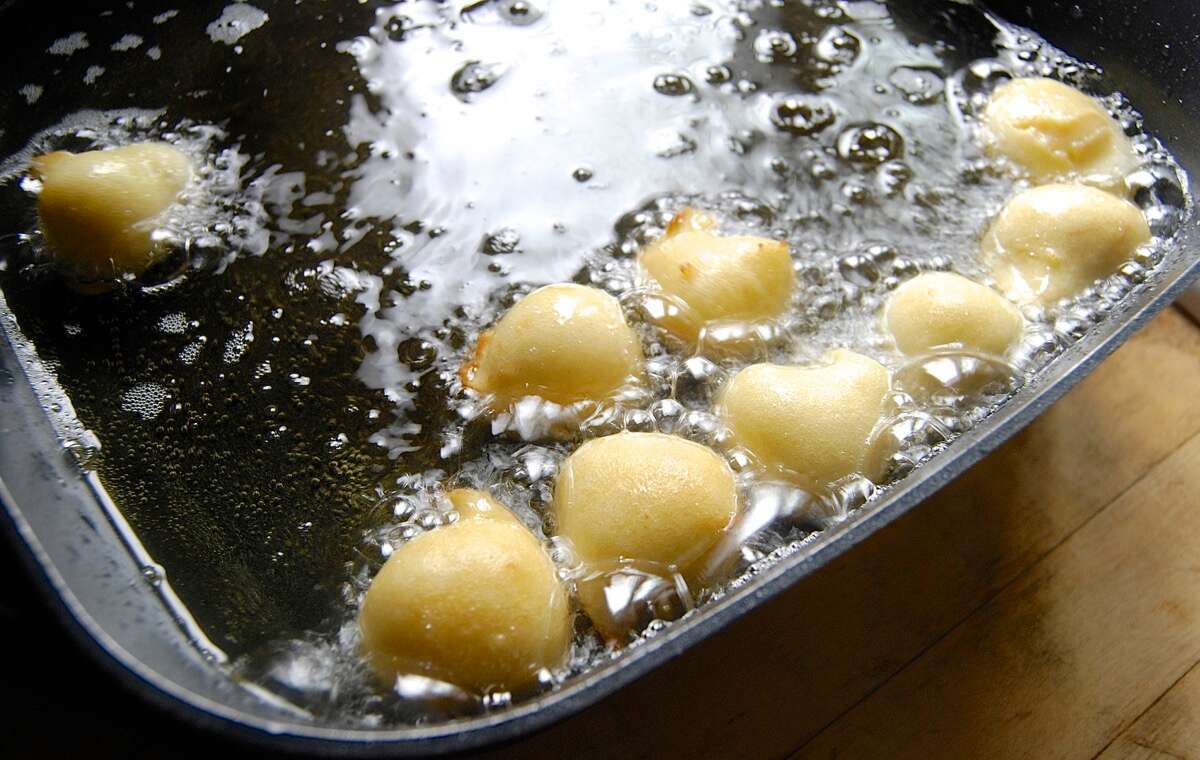 Scoop small (1") balls of batter into the hot oil, filling the pan but not crowding the doughnuts. A teaspoon cookie scoop, filled level, works well here.

Fry the doughnuts for about 6 minutes. As they cook they'll turn themselves over, usually multiple times. Use a chopstick or pair of tongs to give a nudge to any that seem to be stuck on one side. 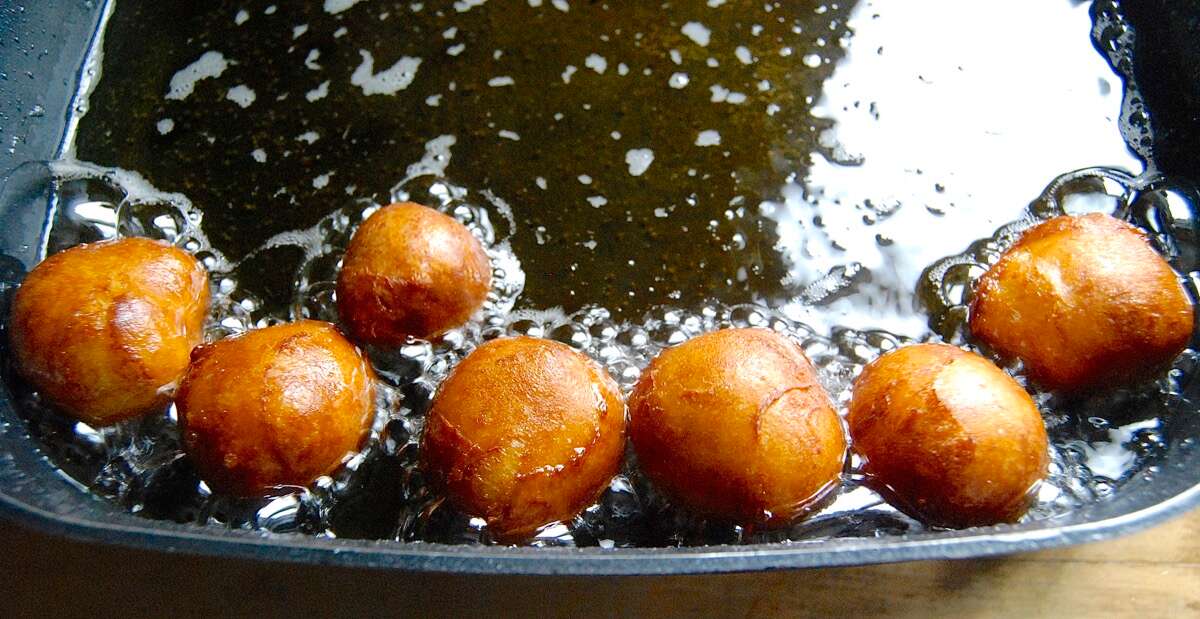 After about 6 minutes, the doughnuts should be a deep golden brown. 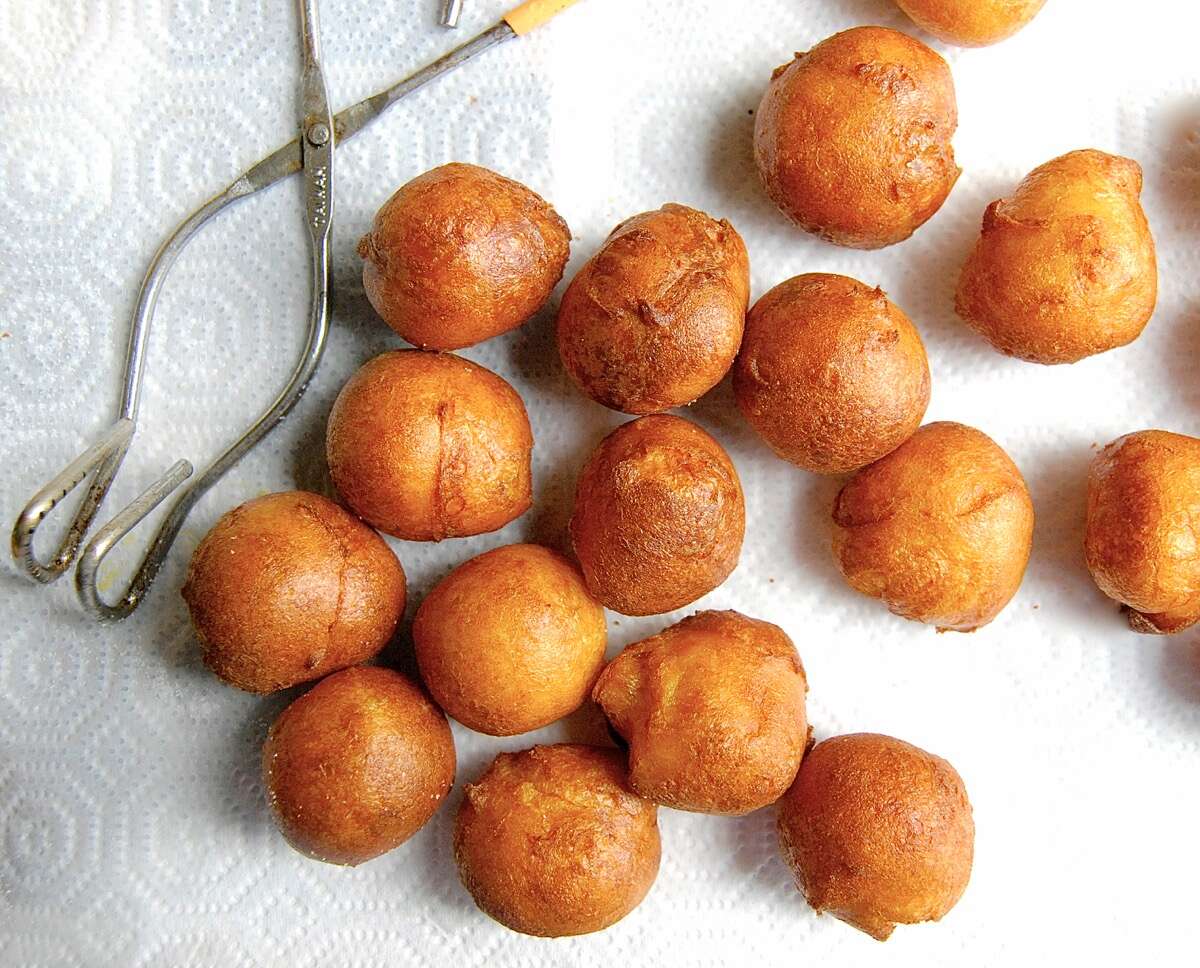 Transfer them from the frying pan to a paper towel-lined baking sheet to drain and cool.

Repeat with the remainder of the batter.

Next, we'll add the jelly. Decide what kind you want to use, and how much: some people like their jelly doughnuts overstuffed, while some prefer just a smidgen.

While it's tempting to use a high-quality preserve or jam, you don't want anything too chunky; these doughnuts are small, and it'll be difficult to get chunky jam into their centers. 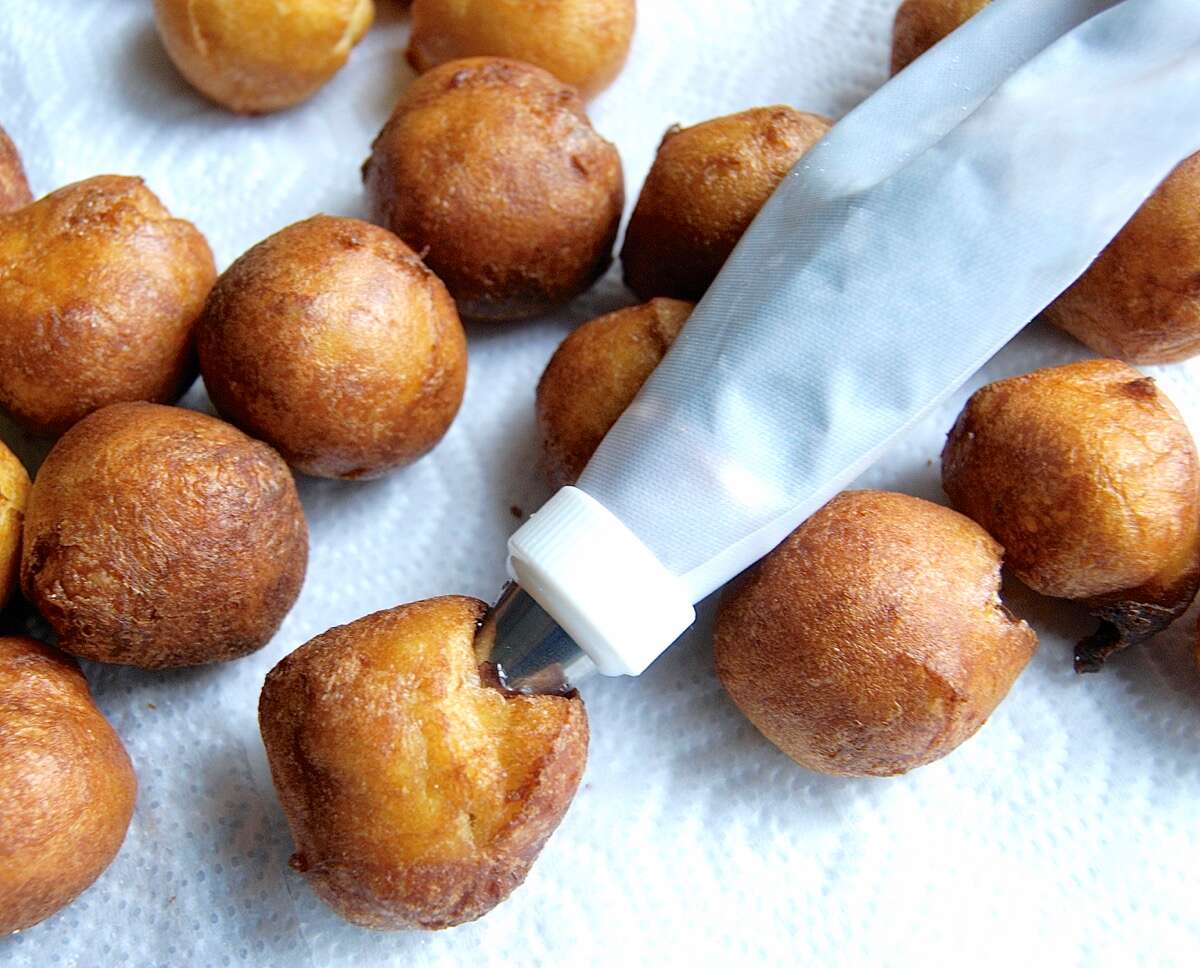 A pastry bag equipped with a plain tip is the perfect tool for squeezing jelly into the doughnuts. 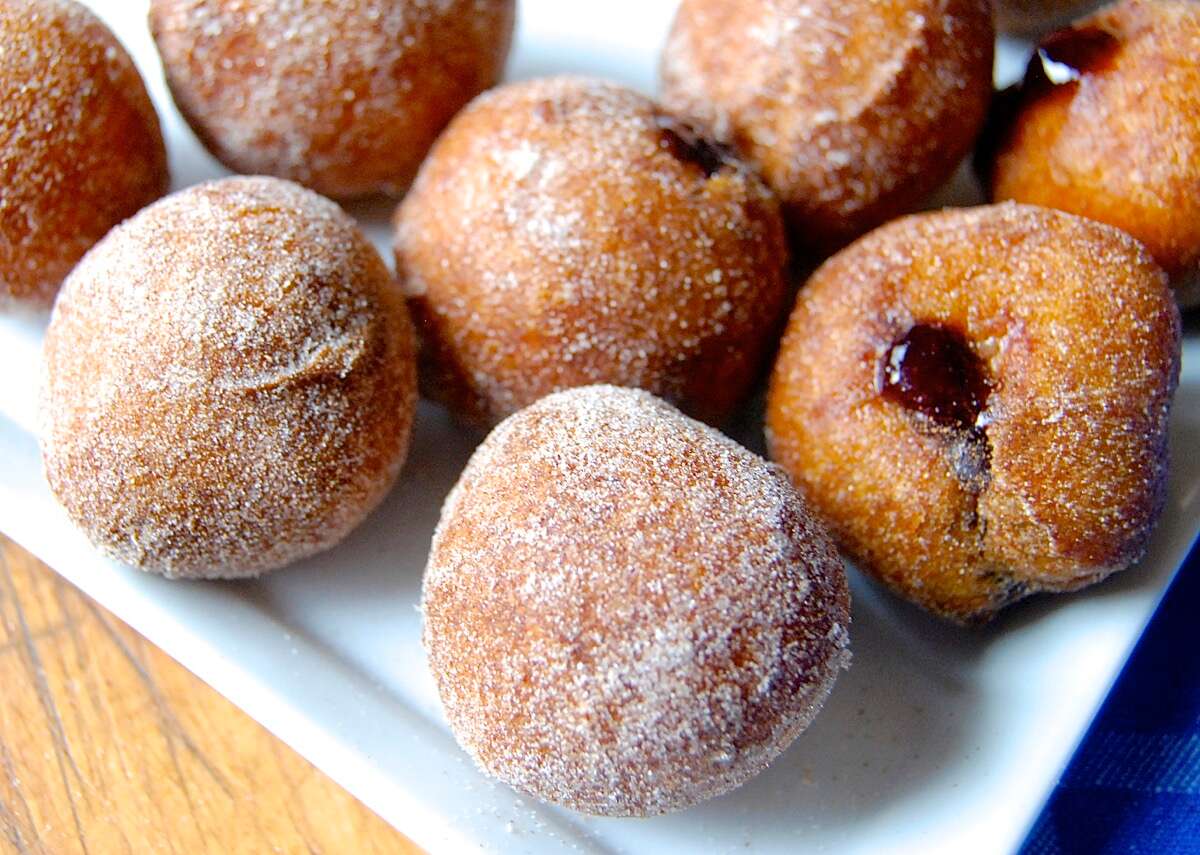 OK, here's another departure from tradition: I've rolled the doughnuts in plain sugar, rather than confectioners'. Either's fine, though; as is cinnamon sugar. 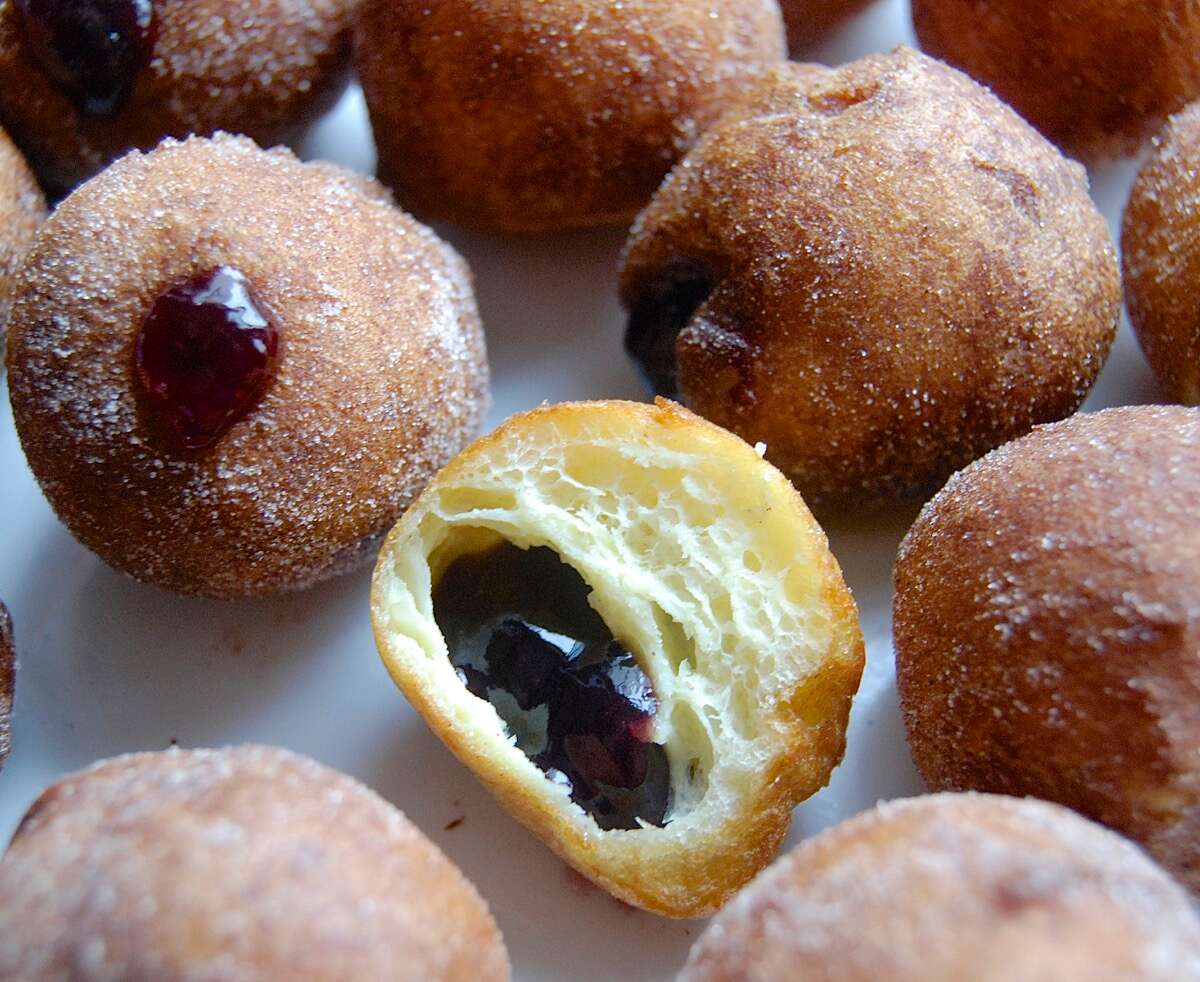 Look at the interior texture! Soft, moist, and tender, a nice counterpart to their crusty exterior.

You'll get about 50 doughnut hole-sized doughnuts out of this recipe.

But if you don't want to make that many; and you're ready to break with tradition again... 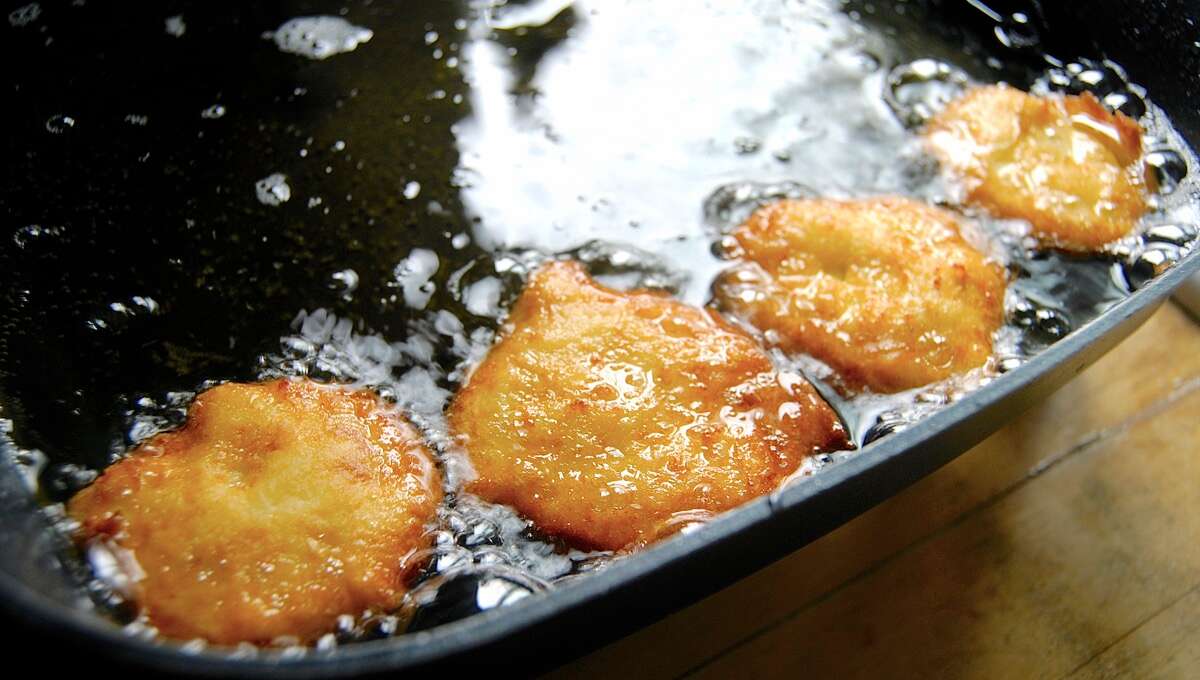 Take some pâte à choux, mix it with an equal amount (by weight) cooked/riced potato, and shape flat patties. 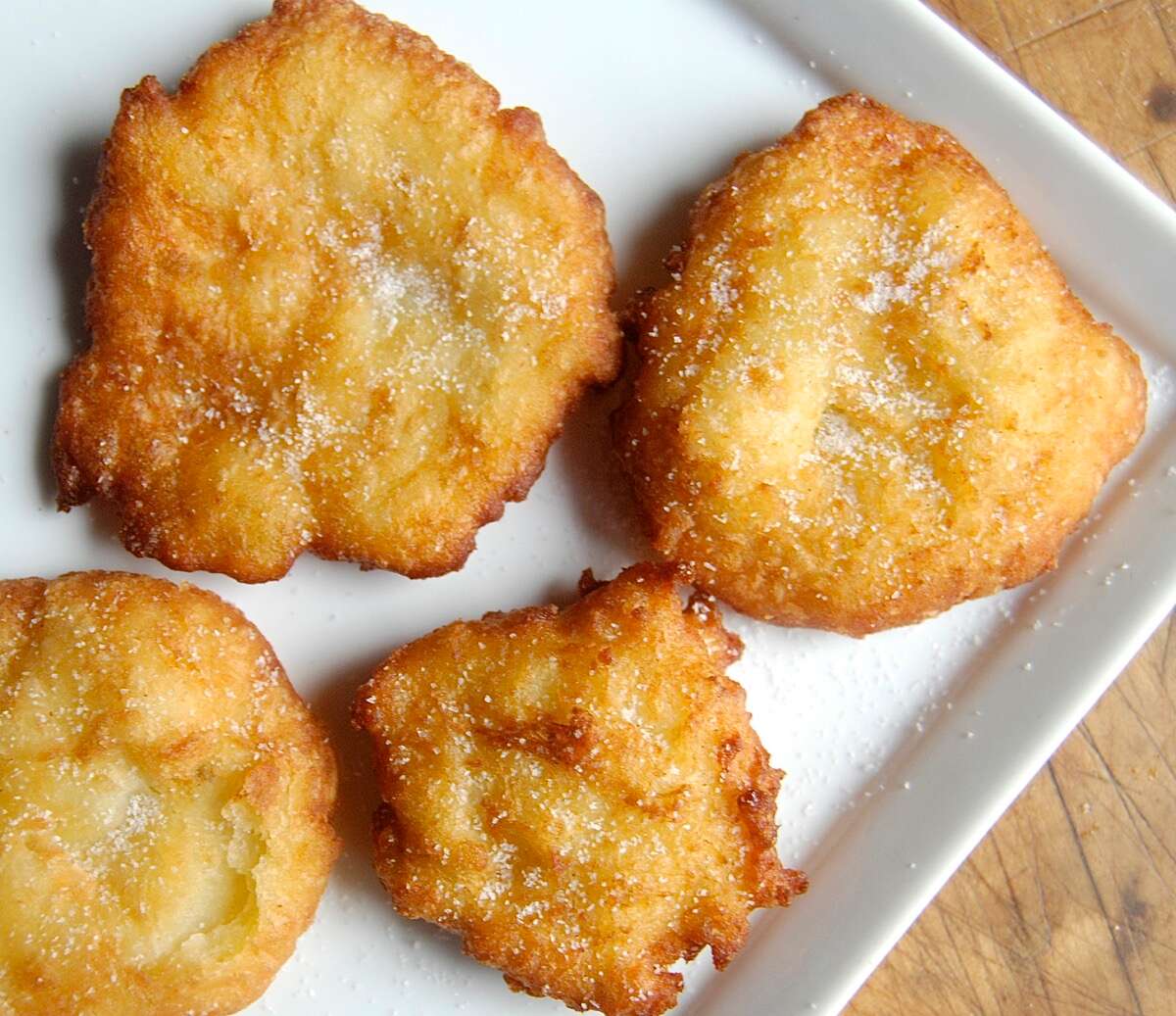 Admittedly, these aren't latkes – they're more like Tater Tots. But what if you combined shredded raw potato with pâte à choux batter, for that little bit of crunch? Hmmm...

Wow! I have a party of 40 coming over for Chanukah and the choux pastry substitution for sufganiyot sounds much quicker, and marvellous! You always come up with the best ideas! THANK YOU THANK YOU PJ! Whoohoo!
I just bought a deep, intricately detailed cake pan, a winged dragon curled around a nest of eggs.Any suggestions as to what sort of cake would work? I was thinking Bundt or chiffon?
Most detailed or shaped cake pans can use a cake mix or recipe that's baked in a 13 X 9 pan or a Bundt. Hopefully the pan came with some directions or guidelines for use so your first test drive or test bake will be successful! Happy Baking! Irene@KAF
Happy 8th night of Chanukah! The pâte à choux method, ironically, is how Jews make Passover matzah rolls. Boil a mixture of oil and water, add powdery matzah meal, mix in eggs, scoop onto a baking sheet, and bake into puffy rolls.
Uh, oil? Try schmaltz on for size! The two are not in the same league when it gives to quality food.
Jews have and do live all over the world. Every region has its Chanukah specialty, and they are all fried. Id love to learn to make brumuelos, little twists of fried dough coated in honey.
Crullers have always been my favorite kind of doughnuts! But now I have a milk allergy. Can you offer any suggestions for making pâte à choux batter/dough with something other than butter? Would coconut oil work, perhaps?
I would suggest margarine as it is similar to butter in composition (water/fat ratio). Coconut oil may make the dough a bit oily. Jon@KAF
First-- my soufganiyot are a little sweet, but there is no sugar in this batter. They seem more like fried bread than dougnuts. And no yeast? Hmmmmm.... Second-- would this work with your gluten free flour? (I make lots of soufganiyot but can't eat them......)
We haven't attempted the recipe with gluten free flours, but I'll pass on the suggestion! Jon@KAF

This Hanukkah, the oil is in the bakes

Frying in oil is traditional for Hanukkah, but this year I’m baking with it instead.

How to make homemade challah

And how to turn it into French toast

Latkes without the frying pan