The year: 1913. We're in the second decade of the 20th century. What does America look like?

Well, in March, Woodrow Wilson steps into the White House. He creates the Federal Reserve, and the first national income tax is instituted and collected.

A rebuilt Grand Central Station opens in New York City, and immediately earns its sobriquet: it's now the largest train station in the world.

Civil War veterans gather in Gettysburg, PA for the 50th anniversary of that great battle. When they meet at the stone wall marking the spot where the Confederates' advance was stopped, veterans from both sides shake hands and weep. 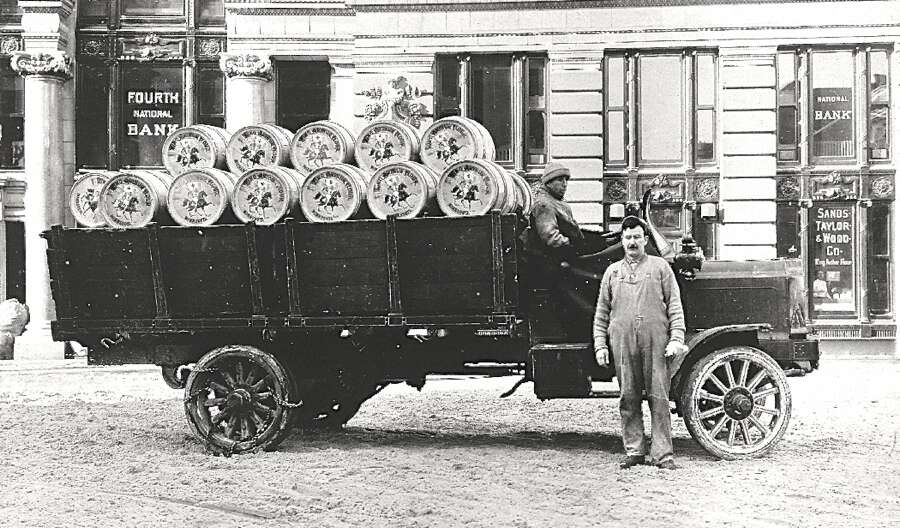 Notice the chains on this King Arthur Flour delivery truck, though – many roads, even in Boston, remained unpaved.

And so are Mallomars – which, from the point of view of all of us foodies, is a huge event.

The burgeoning packaged food industry urges American women to step away from the stove, and break the bonds of their grandmothers' kitchens. Starting in 1912, women are introduced to a new concept: self-serve "groceries," like the Memphis-based chain Piggly Wiggly, opened in 1916.

Now, a century later, we've come full circle and want to bake our own Oreos, and Twix bars, and Hostess Twinkies. What baker worth his or her salt, having tasted "store bought," doesn't at one time or another think, "Hmmm, I'll bet I could make those..." 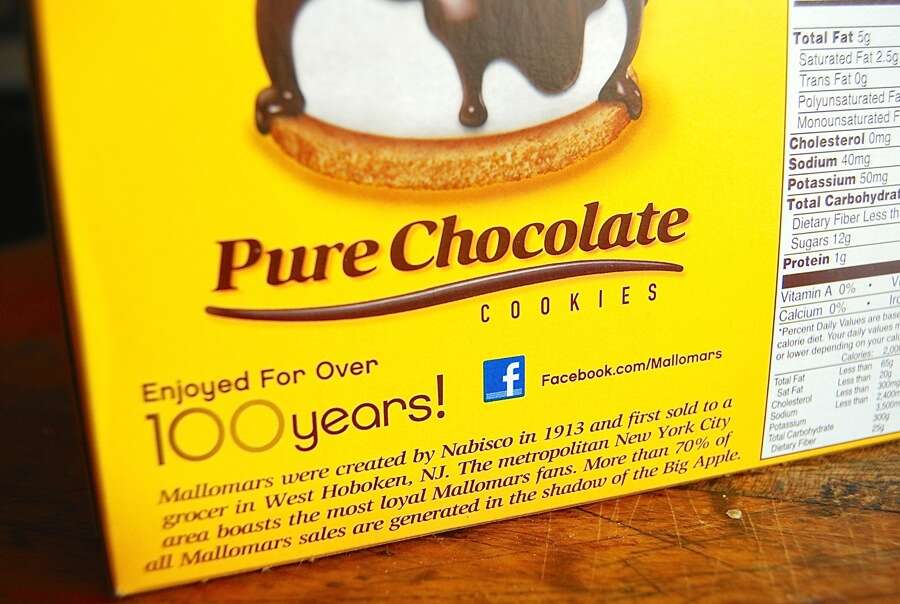 Which is exactly what I've been wanting to do for the longest time with Mallomars, those chocolate-covered marshmallow cookies introduced by Nabisco over 100 years ago, and beloved by cookie-lovers ever since – especially, apparently, those in the Northeast.

So, where to begin? Let's start at the bottom and work our way up. 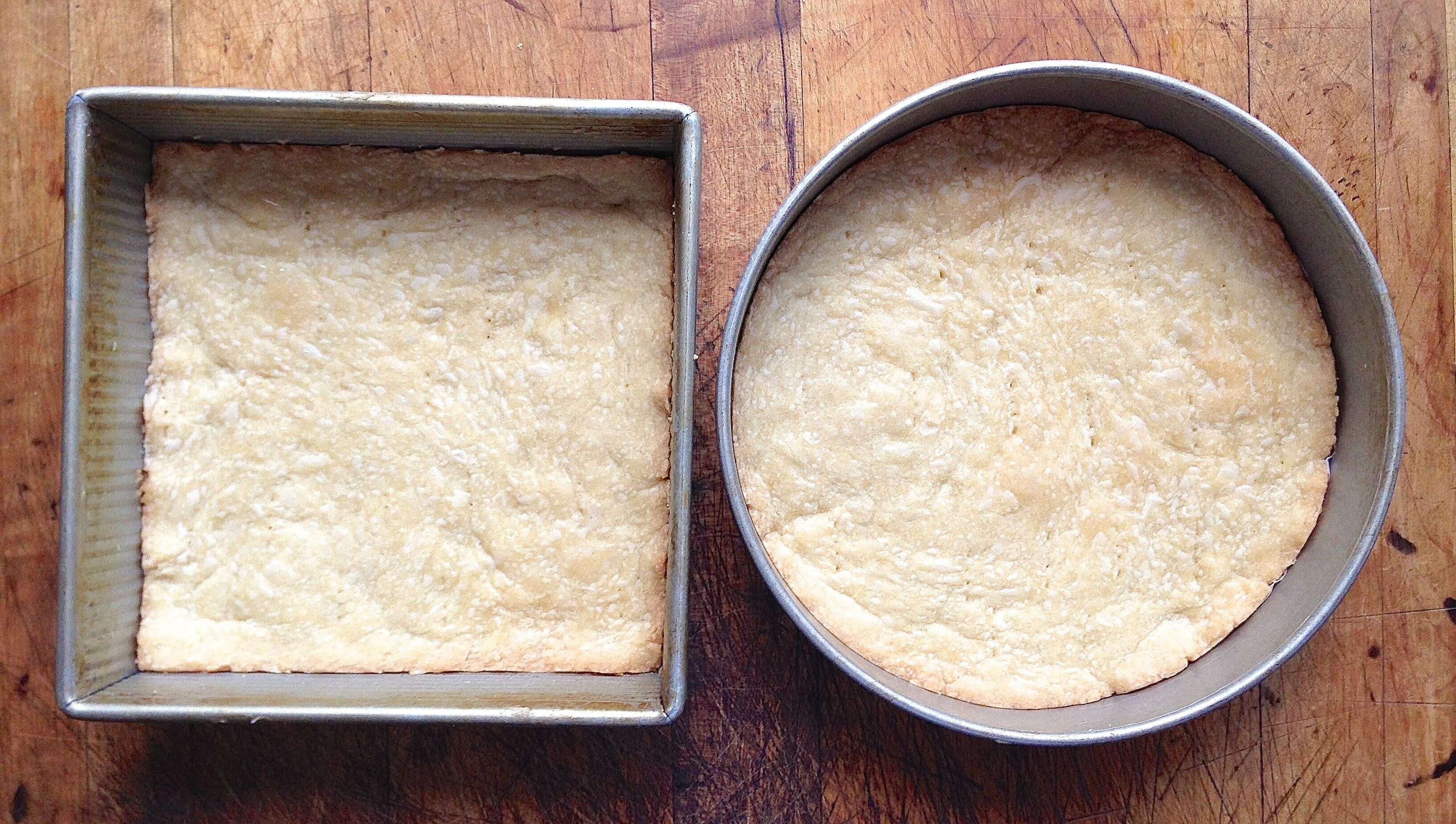 I make a simple crust by baking up a batch of our classic Shortbread.

The recipe calls for two round pans, but I was experimenting, and used a 9" round and 8" square (which are equivalent in area – did you know that?) Going forward, I'd use a 9" x 13" pan.

Next, the marshmallow filling. 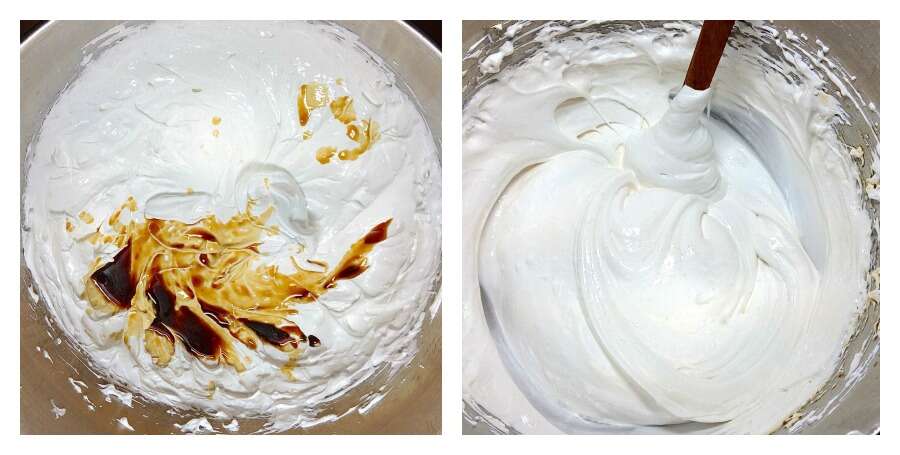 Our Homemade Marshmallows, enhanced with a good hit of vanilla, make (dare I say) a tastier filling than that in the original cookie. Spread the marshmallow atop the shortbread crust(s).

Now at first, I imagine replicating Mallomars exactly, right down to their round, domed shape. 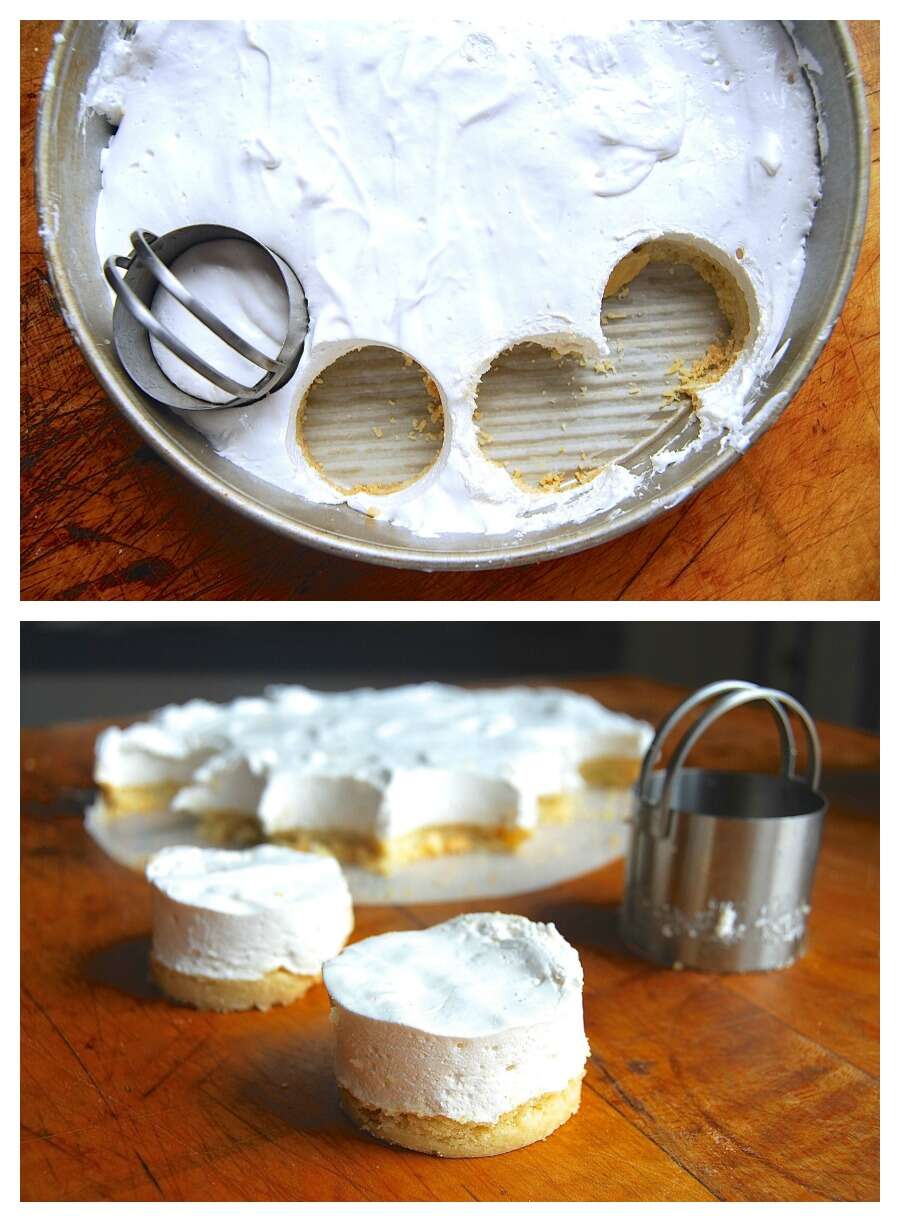 But the whole process is rather... fussy. And as any of you who've been reading my posts for awhile know, I'm not blessed with the Martha Stewart gene; "fussy" and I don't get along.

Cutting the rounds with a biscuit cutter (lots of unbeautiful trimmings), trying to gently push the sticky marshmallow-topped cookies out of the cutter... 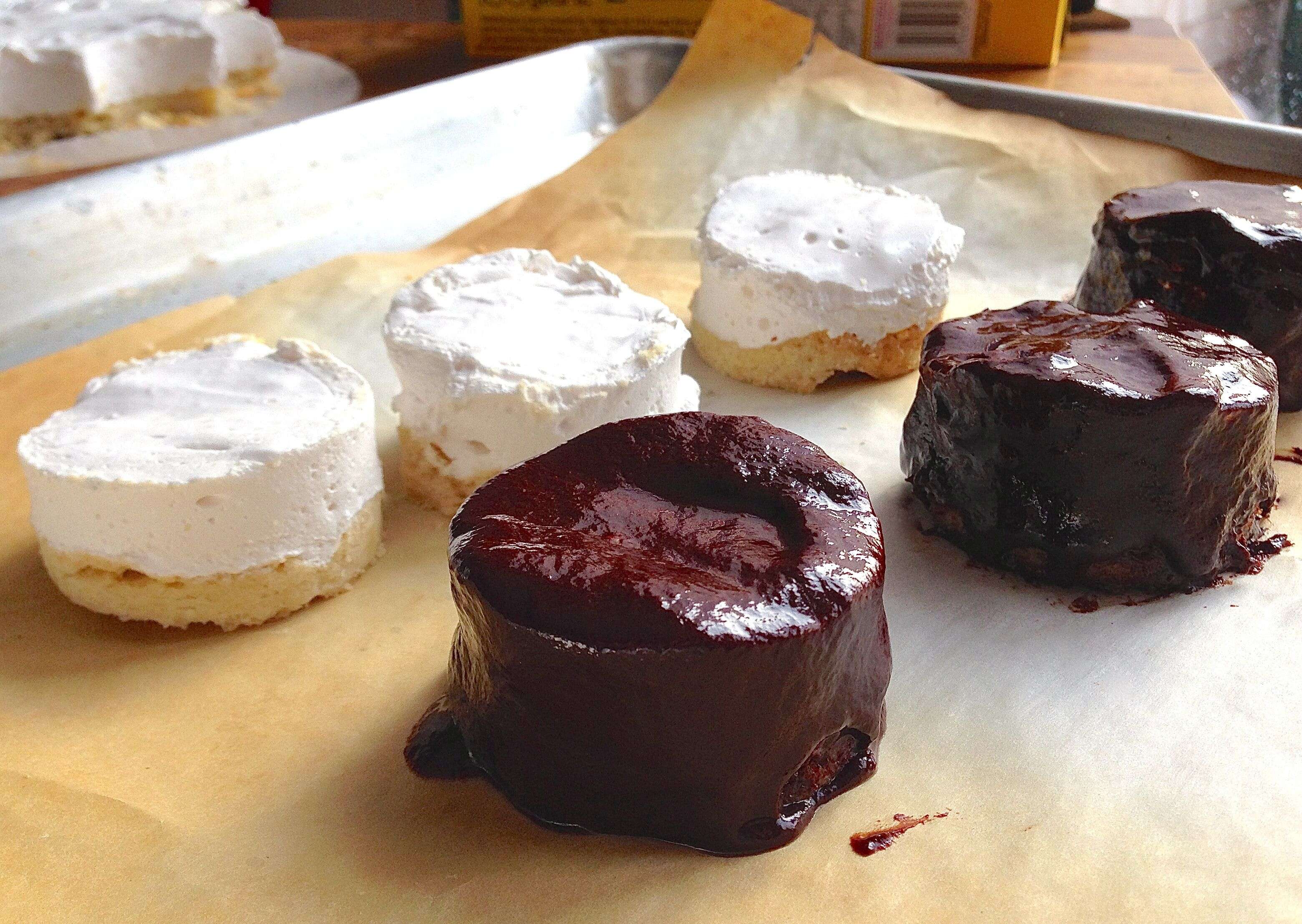 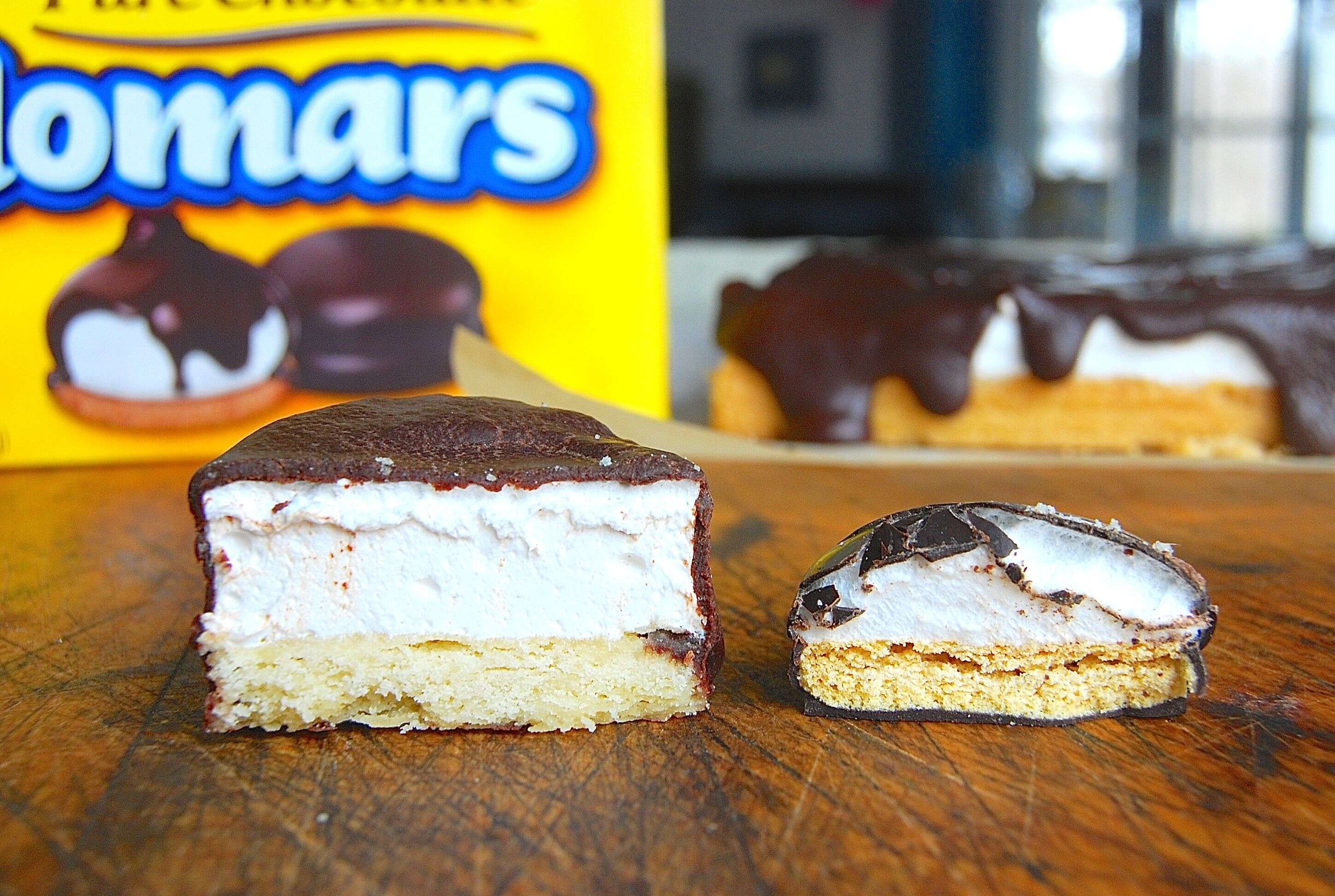 As you can see, I basically strike out, at least in the looks department. My clone (on the left) is bigger than the real Mallomar on the right, with more marshmallow; and it lacks the original's distinct shape. 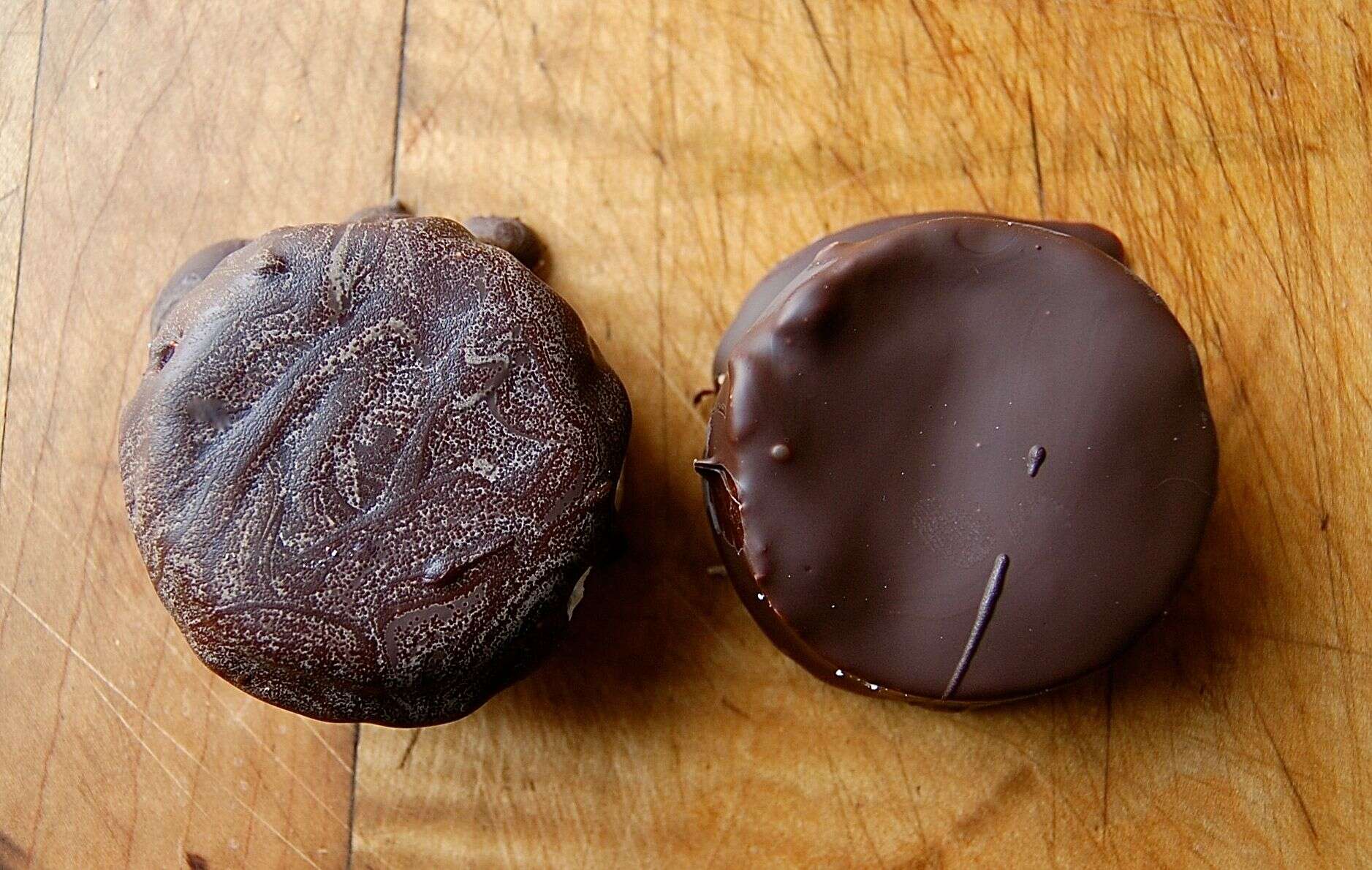 I'm also not skilled enough at chocolate tempering. Check out these two cookies. The one on the right I absolutely nailed, melting the chocolate to JUST the right temperature, stirring in "seed" chocolate, and ending up with the perfect thin, crisp, satiny Mallomar shell.

On the left – FAIL. I must have overheated the chocolate.

But just because I fail, it doesn't mean you have to! My fellow blogger Susan Reid – a veteran chef, cake artist, and cookie decorator – says, "If you're determined to replicate the original shape, scoop and flatten individual shortbread bases, bake ’em, then scoop the marshmallow, too, greasing the scoop each time so it comes out rounded and clean. Or, if you’re super-determined, put the marshmallow mixture into a pastry bag and pipe it onto the shortbread circles. That would get you there before the mixture sets up."

"Freeze the topped cookies and pour warm ganache over them on a rack. Thin shell, big mess. Lots of puddles to swipe your finger through, though..."

So, plan B. I stir together some ganache – it doesn't need tempering, so I'm already one step ahead. I combine 2 2/3 cups (16 ounces) chocolate chips and 2/3 cup (5 3/8 ounces) heavy cream in a microwave-safe bowl; microwave until the cream is steaming, then stir until the chocolate melts. Blessedly simple. Then, I simply spread the ganache atop the pan of uncut cookies. 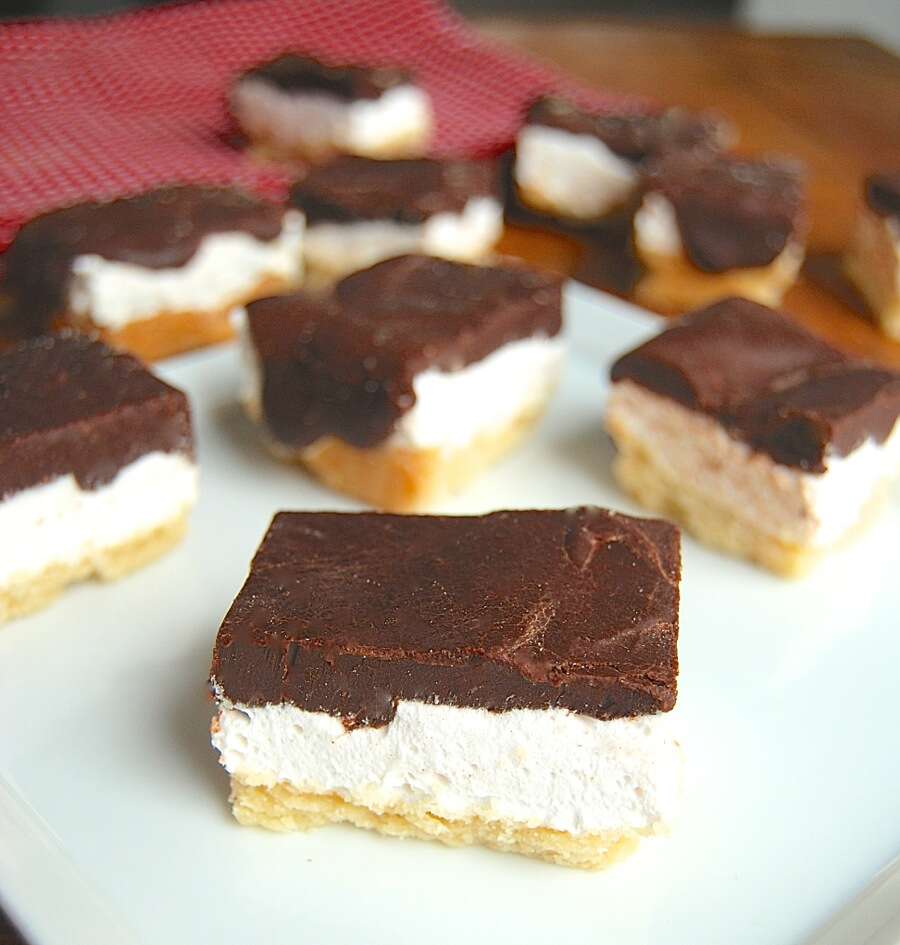 And later, once the chocolate's set, I cut the whole thing into bars.

No, they don't look perfect, like they just dropped out of the Mallomar machine. But yes, they're very, very tasty. I mean, imagine buttery shortbread; fresh, vanilla-scented homemade marshmallow, and dark chocolate ganache.

Oh, and one more thing. Speaking of cutting, how do you avoid the chocolate smear that usually happens when you cut anything topped with chocolate and filled with something lighter-colored – like marshmallow? 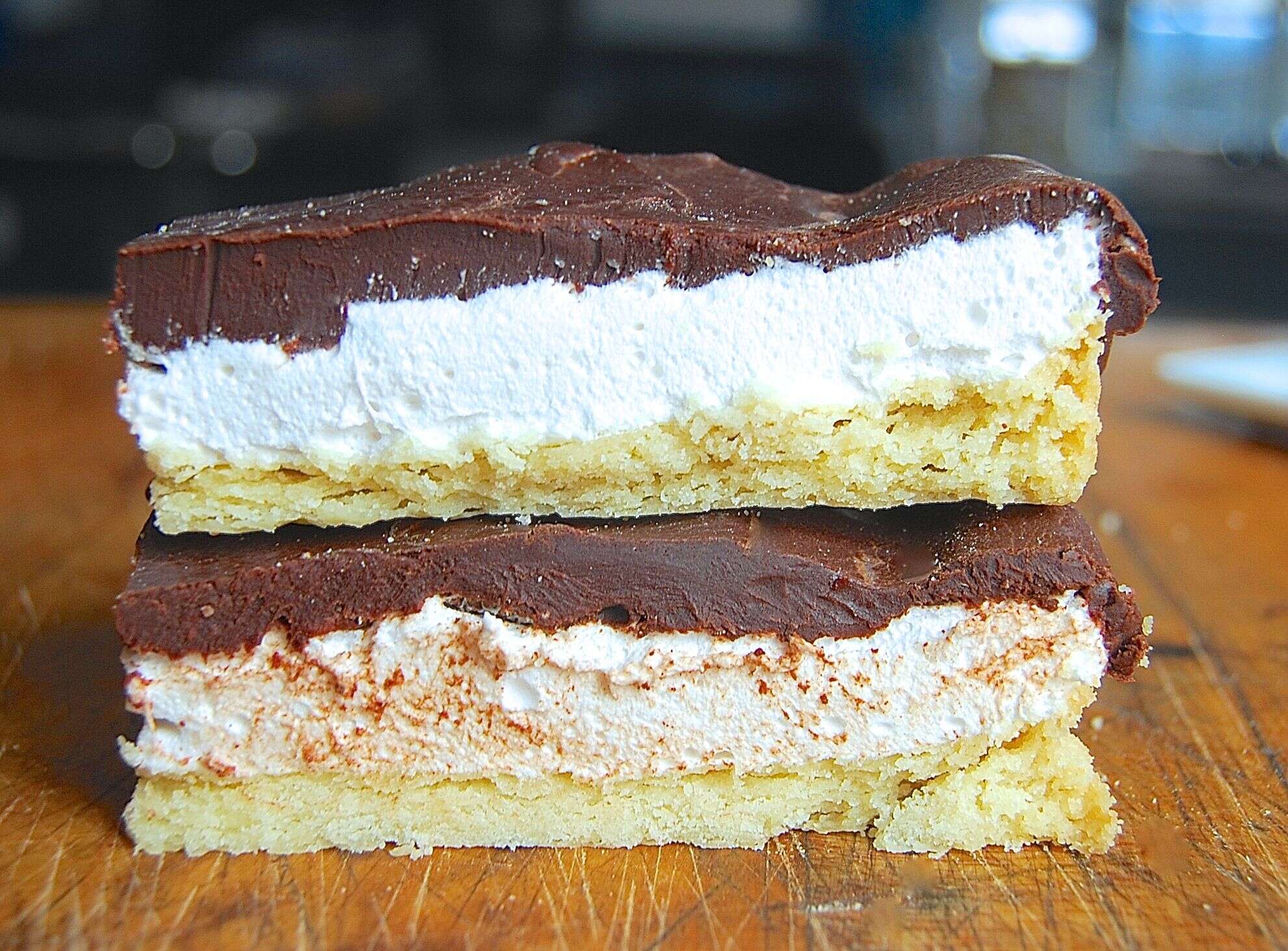 The bottom bar was cut the conventional way, top down.

The top bar, with its pristine white filling, I cut by turning the cookie slab over and cutting through the bottom – no chocolate on the bottom, no chocolate smear in the center.

I may not be prissy – but I'm eminently practical!

Please read, bake, and review our recipe for Mallow Bars.

We hope you're enjoying our special 225th anniversary blog series, American Baking Down the Decades. Interested in more posts? See the following:
1900-1909: Birth of the Brownie
1920-1929: Cake Meets Technology

As always, my thanks to one of the best food history resources out there, foodtimeline.org.

I bet the 'failed' cookies with the incorrectly melted chocolate were gone as quickly as the good ones!! They all look yummy!
Part of the "duty" of the Test Kitchen bakers and the employee-owners here is to try all baking experiments, whether they are wonderful, or wonderfully melty. :) Kye@KAF
Hi PJ. I made a cookie like Mallomars years ago when I discovered how wonderful homemade marshmallows are. I think you'll really like this method. Spray a mini muffin tin with non stick spray, either cut your cookie base to the exact same size as the top of the muffin cups or use a Nilla Wafer cookie-they're the exact size! Fill each cup with fresh marshmallow and top with your cookie. Let the marshmallow set up. Gently pull out each cookie by releasing the sides first. Dip in chocolate ganache or tempered chocolate. A perfect cookie!
I love this idea! Thank you for sharing- what if you used English muffin rings on parchment to make a 4" across cookie? You're an inspiration! Laurie@KAF
I think you did an excellent job. So what if they don't look exactly like the originals, they have character and were made with love and yummie fresh ingredients, which is the only thing that matters.
On going back and "catching up" on this series, I'm really enjoying them. But a vital ingredient is missing from the first portion (historical) of the blog, and I think it is important even though the blog is introducing a great recipe. WWI didn't happen? Well, my spellcheck just tried to correct that to WWII, so maybe not. . . I bring this up because one reason -- in fact many historians would say, the only reason that women were targeted for time-savers in the home was that the men were over in Europe and women (long before Rosie the Riveter) were doing the men's jobs. Since we were mostly still farming/ranching, this might not have been as apparent as during WWII, but it was still a big factor in the decision (I think) to come up with packaged goods and other time savers.
I love the intersections of home front/war stories; thank you for giving us something new to ponder! Happy baking- Laurie@KAF
We had a Christies cookie bakery up the road from where I grew up. They didn't call them Mallomars but we spent a lot of time taking them apart as kids (that pesky engineering gene) and they had: --cookie like graham cracker but all white flour, rolled and docked (saw the holes) and cut into circles to bake --raspberry cookie jam it is thicker than regular jam and seedless --marshmallow dropped from a tank with a pipe. Use a pastry bag with no tube and a big hole to do this at home. BUT that marshmallow was tender meaning LESS GELATIN than for marshmallow candy that has to cut well. Like at least 1/2 if not 1/3 --cookie glaze which is semisweet chocolate and shortening NOT butter NOT cream. 2 ounces shortening to 4 ounces chocolate. Cookies had to be chilled NOT FROZEN. These Christies cookies were very seasonal, I think after Christmas and only to the end of May. They switched to the shortbread rings dipped in chocolate for the back-to-school season.
All of these options sounds delicious! One bite of these would make us want to enjoy them year round, not just during the holidays. Happy baking! Kye@KAF
I've never heard of Prince spaghetti. Is that perhaps more an eastern end of the country thing? (I'm on the left coast.) Though I can't say as I've ever seen a Mallomar in person either, so perhaps I'm just oblivious. Love the journey through history via food!