There's just one difference between those first three island paradises, and the last -

Bali, Maluku, and Oahu are all Pacific islands bathed by tropical breezes.

They're places you'd go when you're from Buffalo, and it's -14°F, and the lake-effect snow has risen not only to the eaves of the garage, but to the limits of your patience.

Nanaimo? It's Pacific, too.

Only if you're from the aforementioned Buffalo, and you consider Canada's Vancouver Island a warm-weather retreat.

According to Wikipedia, Nanaimo, a city of nearly 80,000 on Vancouver Island, "has been dubbed the 'Bathtub Racing Capital of the World...' It is also fondly known as the 'Hub, Tub, and Pub City' because of its association with bathtub racing and the numerous 'watering holes' in Old Nanaimo."

So there, all you cynics out there; man does not live by palm trees and piña coladas alone.

In fact, Nanaimo is known for SO much more than its bathtub racing (honest, it's not what you think!) Namely: Nanaimo Bars, perhaps the densest, richest, most sinful cream-filled, ganache-topped, chocolate-nut-coconut bars known to mankind.

These tasty bars were born in 1952, when a fund-raising cookbook from the island featured three recipes for chocolate squares. These recipes were reprinted under the name "Nanaimo Bars" in the Vancouver Sun. Canadian food companies adopted them as a convenient vehicle for their products, and the bars have been growing in popularity ever since.

So what if Nanaimo isn't a tropical paradise? With an average low in January of just under freezing, and an average high in August of about 75°F, it's wonderfully temperate – Buffalo residents, eat your hearts out!

And besides, anyplace that invents a confection that's been steadily growing in popularity for nearly 60 years has earned its place in (food) history.

Nanaimo (nuh-NYE-mo), we salute you! (And your bathtub racers, too.)

Thanks for the wunder-bars - let's make 'em. 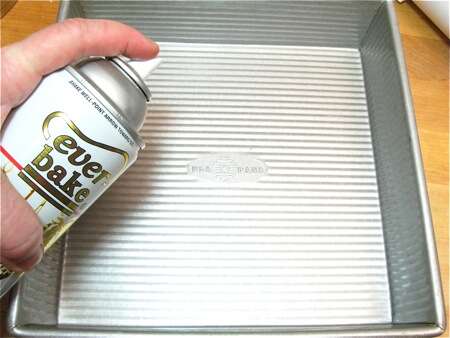 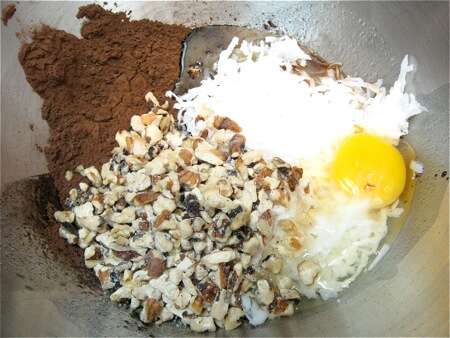 To make the crust – place the following  in a mixing bowl: 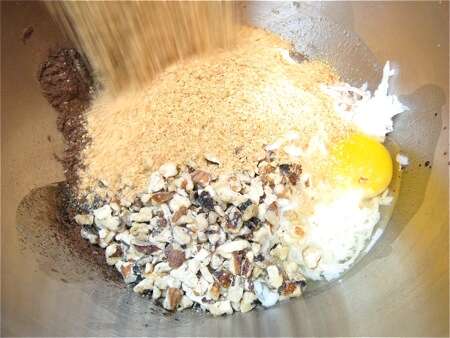 Beat everything at medium speed just until thoroughly combined 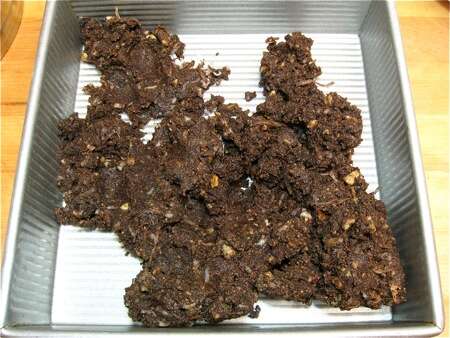 Transfer the sticky mixture to the prepared pan. 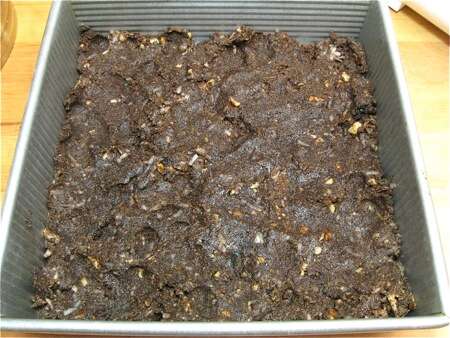 Press to cover the bottom of the pan. 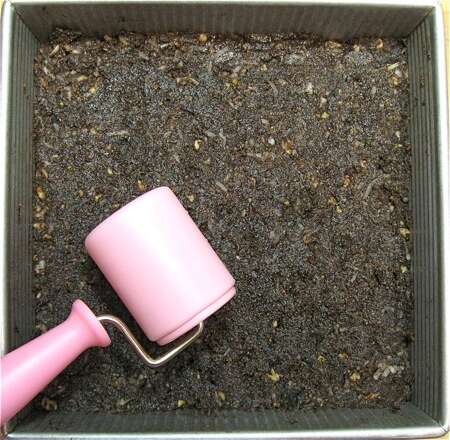 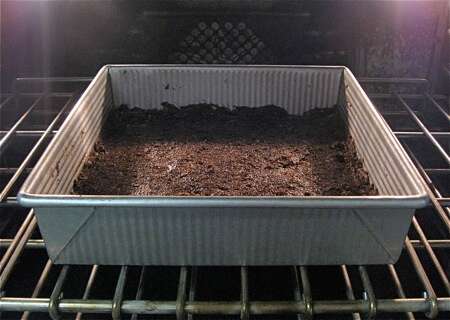 Bake the crust for 10 minutes. 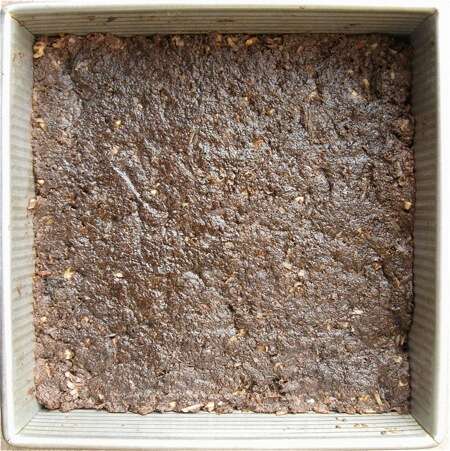 Remove it from the oven; it'll feel soft. Set it aside to cool while you make the filling. 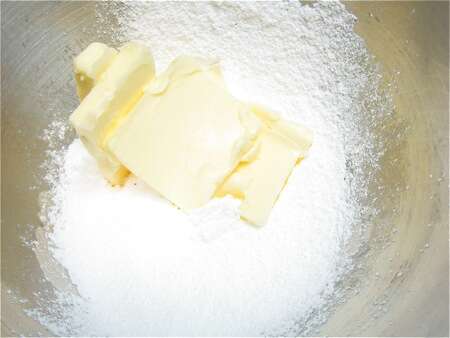 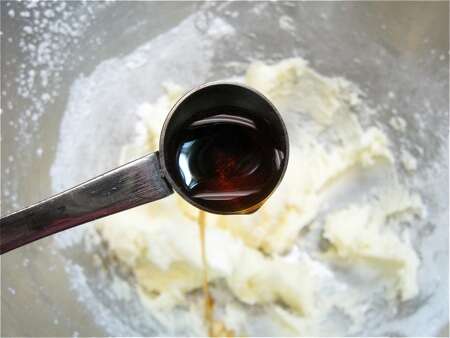 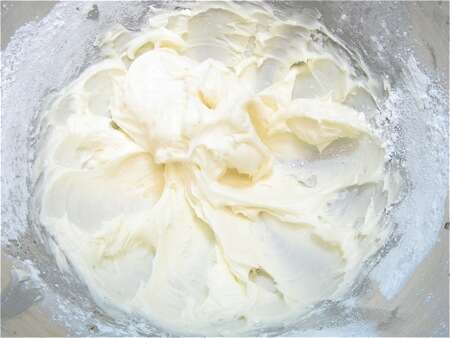 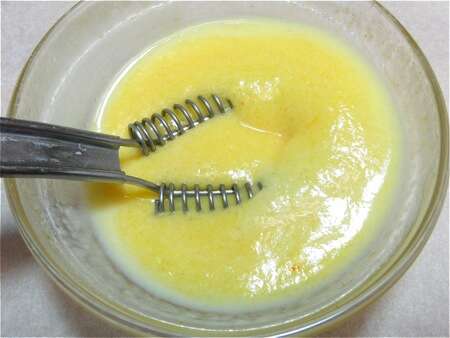 OK, I hear you: "What am I going to do with the rest of the pudding mix, now that I've opened the box?"

Make instant pudding, of course, reducing the milk in the recipe on the box by 3 tablespoons. Add 1 teaspoon vanilla extract for enhanced flavor.

Add the pudding mix to the butter/sugar mixture; stir to combine. 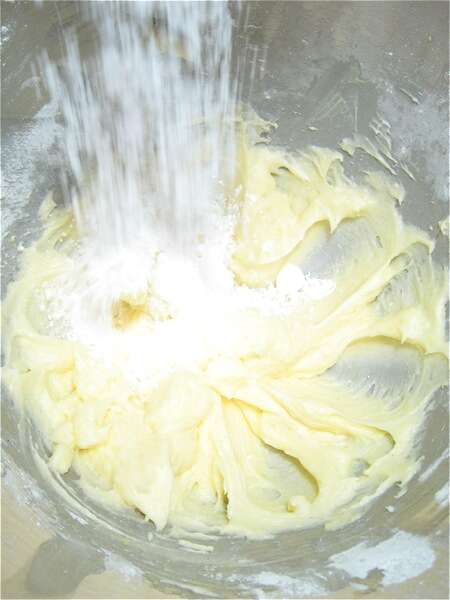 Add an additional 1 cup (113g) confectioners' sugar or glazing sugar, and beat until the filling is smooth. 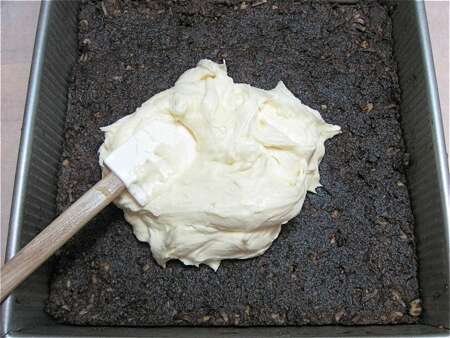 Dollop the filling onto the cooled crust. 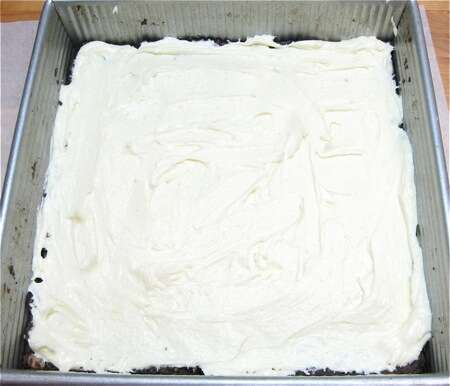 Spread it all the way to the edges.

Cover, and refrigerate until chilled.

Once the bars are thoroughly chilled, make the icing. 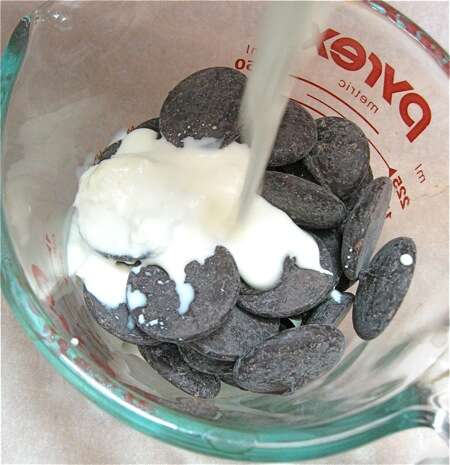 Place the following in a small saucepan, or microwave-safe bowl or cup: 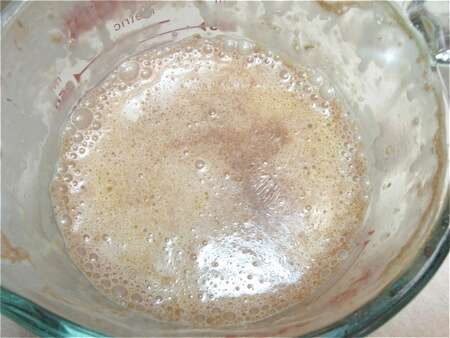 Heat until the cream is steaming. 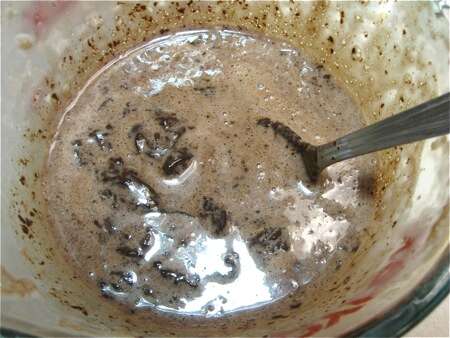 Then start to stir. At first, the mixture will seem unpromisingly lumpy; just keep stirring. 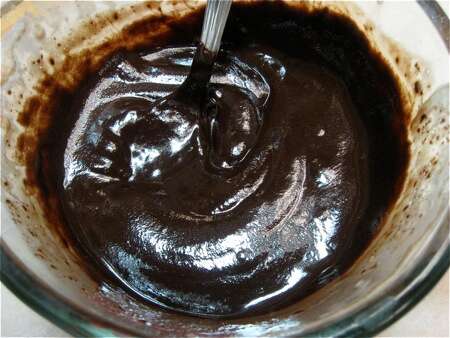 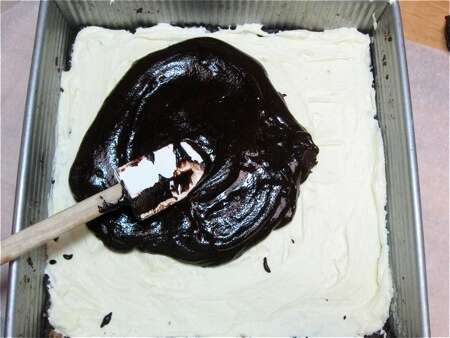 Spread the frosting onto the bars. 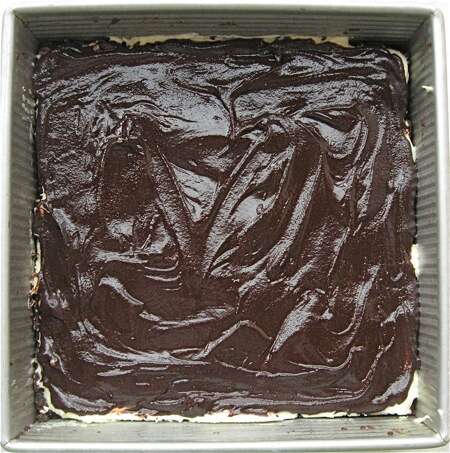 Refrigerate until the chocolate is set. 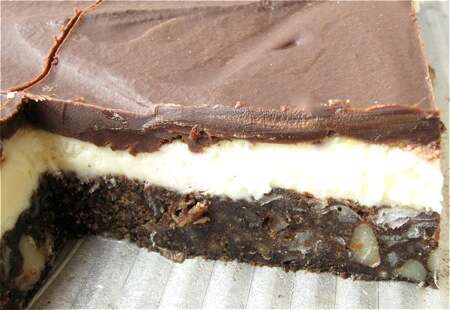 Cut into small bars or rectangles to serve. The bars will be very stiff when cold, but will soften quickly at room temperature. 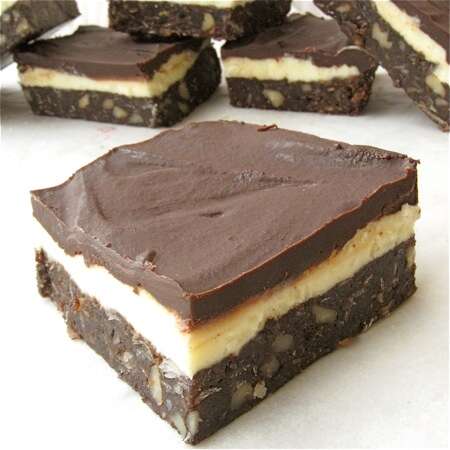 Is that not a thing of beauty? 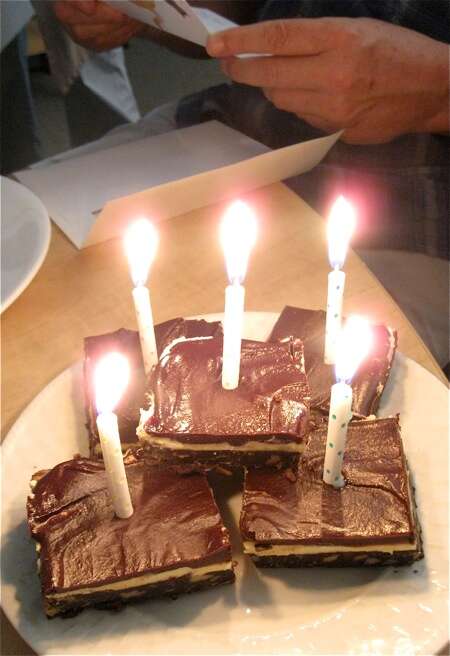 Can't let something as good as this "go to waist" in the testing area; I served these at a birthday party we had for Jim, our Web developer.

To great approval from all in attendance: our Web/email team.

Read, bake, and review (please) our recipe for Nanaimo Bars. 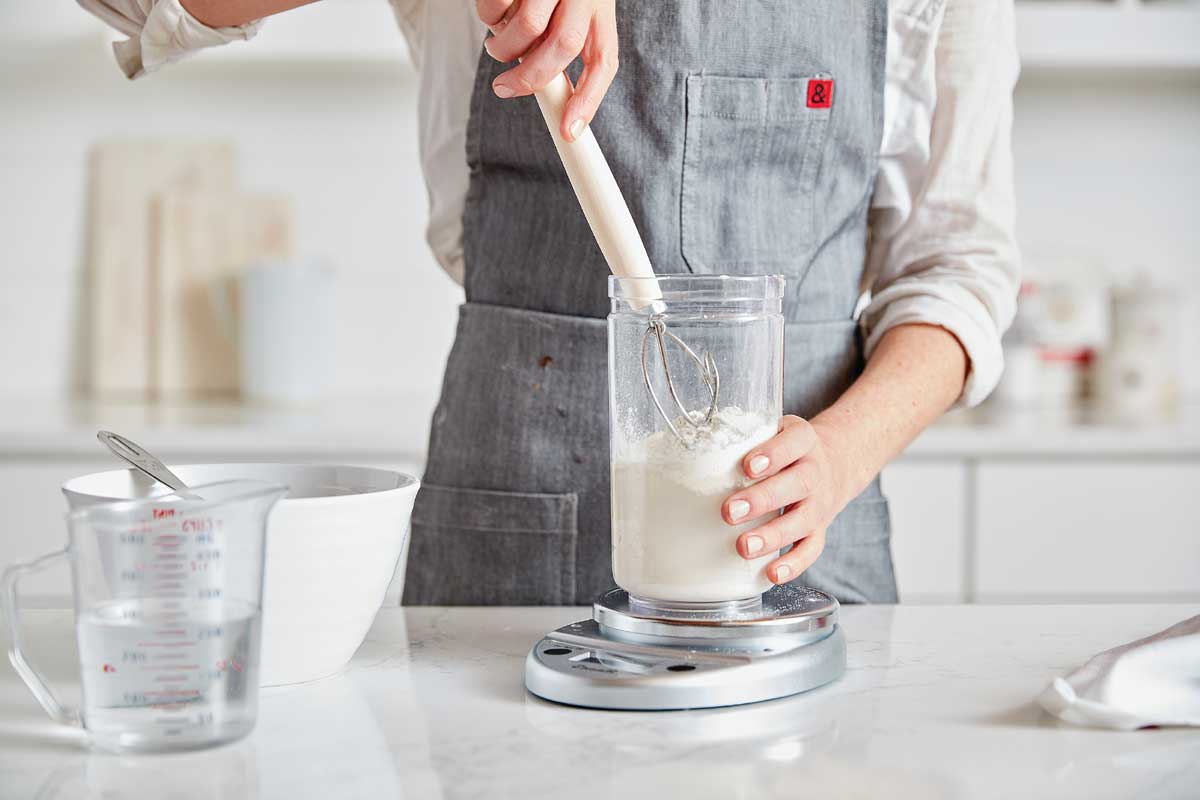 Very cool. I didn't know it was possible to make these without Bird's Custard Powder! :) The coconut oil has to be a great addition. Thanks
So...are you originally from Buffalo? PJ's out of the office today, but we know she's been all over the place. I believe the elusive girl originates from Wisconsin though! Check her out here. ~Jessica@KAF I'm here - I'm originally from Wisconsin, and lived in Maine for 14 years, then New Hampshire. But I do have a friend from Buffalo who "raves" about the snow! :) PJH
I was introduced to these by a resident of Nanaimo. I love them and make them more often than I should. Sometimes I add Grand Marinier...mmmm.
So, for the filling, do you use the rest of the box of pudding or do you set it aside for some other use? (I'm confused.) PJ says this right after that step above: "OK, I hear you: 'What am I going to do with the rest of the pudding mix, now that I’ve opened the box?' Make instant pudding, of course, reducing the milk in the recipe on the box by 3 tablespoons. Add 1 teaspoon vanilla extract for enhanced flavor." ~Jessica@KAF
All in all a good rendering of the bars. Hunt for "Bird's Custard", an originally-British mix for the custard layer. Using this is supposed to be the authentic custard layer filling, sans coconut. This makes a slightly less firm custard layer; however, it means one then disassembles the bar piece to eat, sort of like a creme-filled cookie. Well done at finding this treasure! Liam (who's been to Nanaimo but who bakes his bars in Ontario)
You just made my Albertan Hubby very happy with this recipe! We went to visit BC & Alberta recently and I got introduced to these goodies... now I just need to get the a sausage roll recipe down and I'll be set, eh?
Yum, Nanaimor bars!!! I was so excited when I saw this post. I am Canadian to the core and this Fridays is Canada Day in Canada (which is sort of like what July 4th is down here to Americans) I had been planning on making my usual recipe for the bars for my ode to Canada this weekend but I will try this one. I love the addition of coconut to the bars. I have had the bars with mint extract and a few drops of food coloring added to the middle layer which is also scrumptious. Make these bars people. Anyone who eats them will think you are the best baker in the universe!!!
As an ex-pat Canadian living in the USA, I have made these bars (using a different recipe) several times for friends and family down here to rave reviews. This Friday is Canada Day in Canada, which is to Canada what July 4th is to Americans. I was planning on making the bars using my usual recipe but now I will definitely make your version here. I love the addition of coconut in it. I've also seen variations using mint extract for the middle layer and a few drops of green coloring. I highly recommend anyone new to these bars try them out, they are heavenly delicious.
The interesting thing about Nanaimo bars is that in our Ontario, Canada family, we grew up with this treat in the 50s and 60s but my mother's recipe was called "New York Special". And it was special! I have never been able to call it Nanaimo Bars!

How to make flavor-infused sugar

Vanilla sugar and beyond