The best of cheesecake, in bite-sized form

SUCH an overworked expression, but still... when you're talking cheesecake, the tiniest bite is capable of sending you into paroxysms of ardor. The richness of the cream cheese! The delightful interplay of tangy and sweet; the barely crunchy crust cradling its ultra-smooth filling...

Be still, my heart!

There's one problem with a traditional cheesecake, though; it's REALLY hard to serve it in really small pieces. Just try cutting a 1/4” slice of a round cheesecake... not happening, right?

Take that same luscious cheesecake, though, bake it in a square pan, and all of a sudden it's easy to have, literally, “just a tiny bite.”

A 1” x 1” cube of cheesecake? No problem. And sometimes, that single bite is all you want – and all you need. Just ask your waistline, right?

Check out our Vanilla Cheesecake Bars.

Before you start: you'll want to have 16 ounces (two large packages) of cream cheese at room temperature; so give yourself a couple of hours for this to happen. 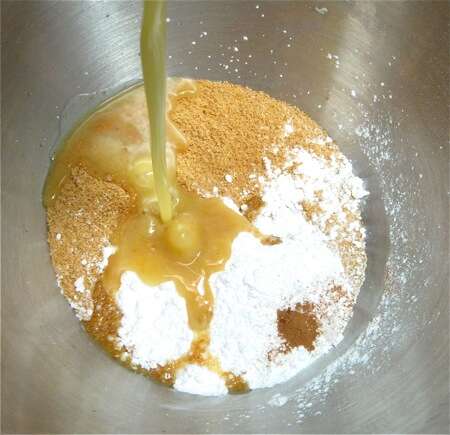 First, the crust. Put the following in a bowl: 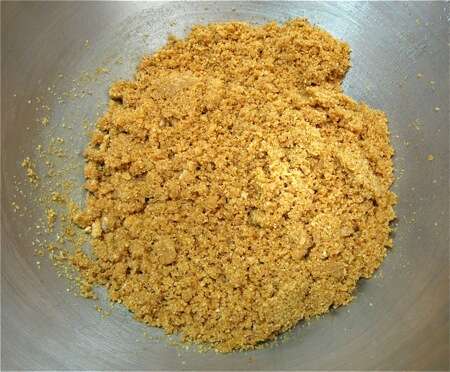 Stir until the butter is thoroughly dispersed.

You can also do all of this in a food processor. Process the graham crackers and other dry ingredients until the crackers turn into crumbs, then add the melted butter and pulse briefly, just to combine. 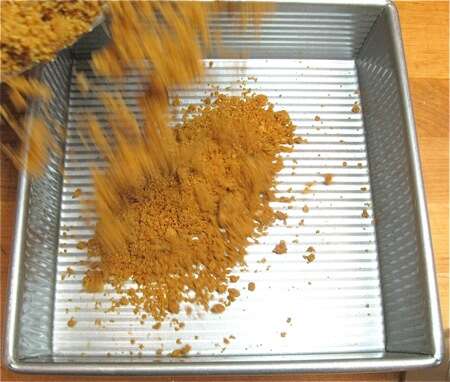 Pour the crumbs into an ungreased 8” square pan.

Can you use a 9” square pan? Yes; see directions at the end of this post.

Press the crumbs into the bottom and about 1/2” up the sides of the pan.

At this point, the recipe calls for you to freeze the crust for 15 minutes, if you're using a metal pan (not necessary if using ceramic or glass).  This is supposed to prevent the edges of the crust from slumping. 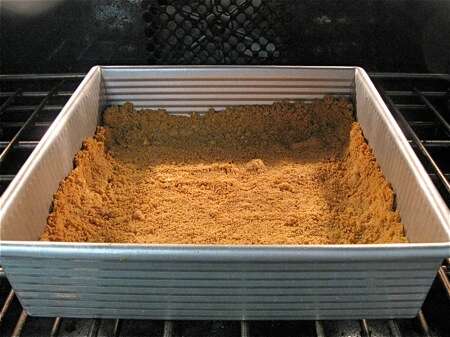 I didn't feel like waiting around, so I just went ahead and put the crust in the oven.

Bake it for 8 to 10 minutes, until it feels a little bit hard/crunchy; the color won't change much, though it may brown a bit in the center and around the edges.

Remove the crust from the oven. 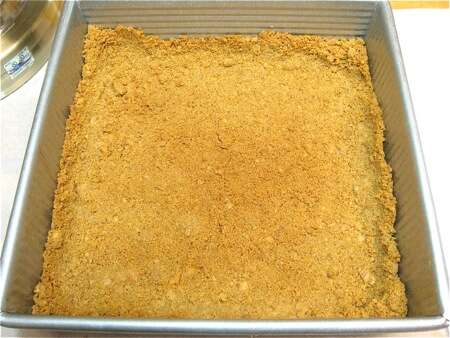 Again, the recipe calls for you to cool the crust before filling. I didn't really bother to do that, either...

Hey, that's why they call it the test kitchen, right? Try to do lots of things wrong, and see if it all comes out right!

First, before you forget, lower the oven temperature to 325°F. 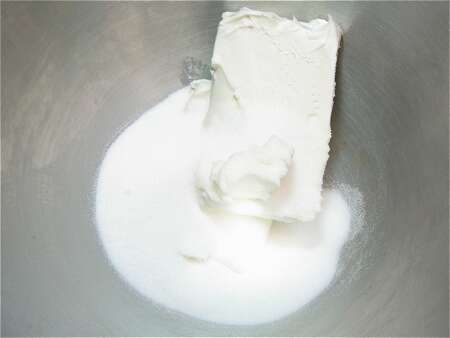 Put the following in a bowl: 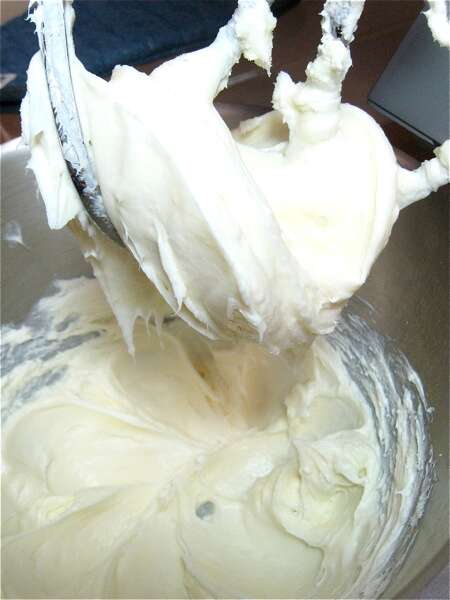 Mix until smooth. If the cream cheese is cold from the fridge, you'll end up with lumps. 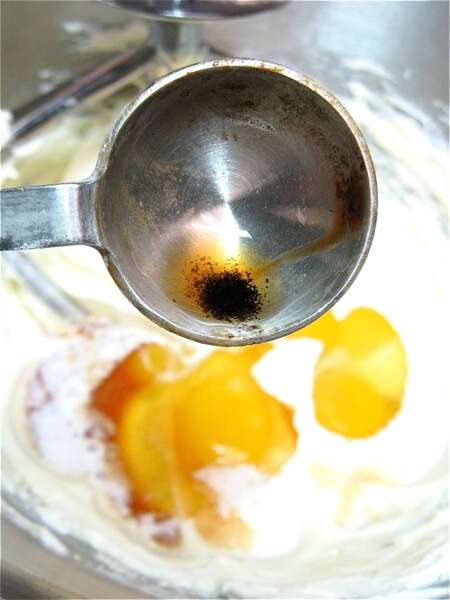 I like my cheesecake pure vanilla, so I didn't use the lemon. Some folks think the touch of lemon adds “New York deli” flavor.

But I did use Vanilla Bean Crush; you really do get beans and crushed pods along with the extract, as you can see from the sediment in the measuring spoon. 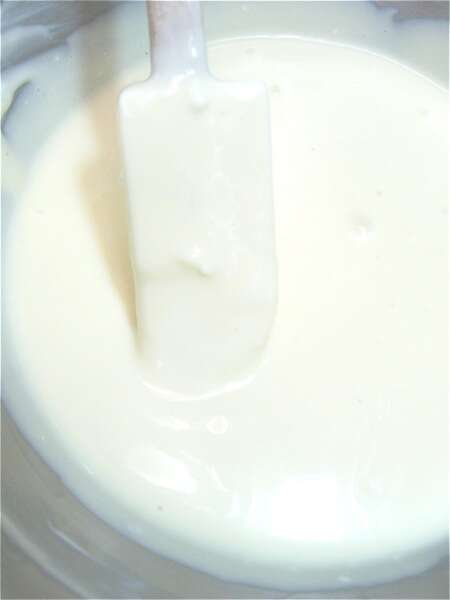 Mix until combined, stopping to scrape the sides and bottom of the bowl at some point.

Pretty smooth, eh? I see one lump, but this is the silky texture you're after. 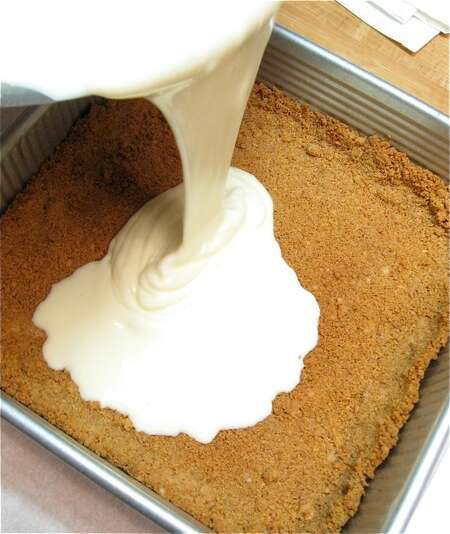 Pour the batter into the crust. 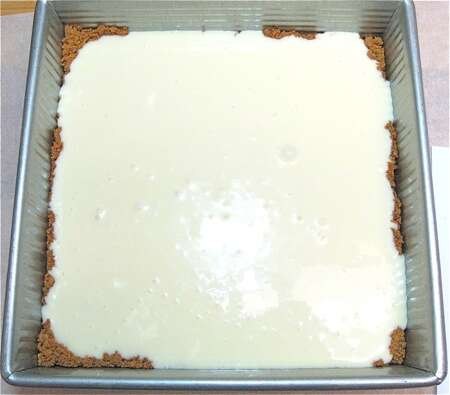 It'll overflow in spots; not a problem. 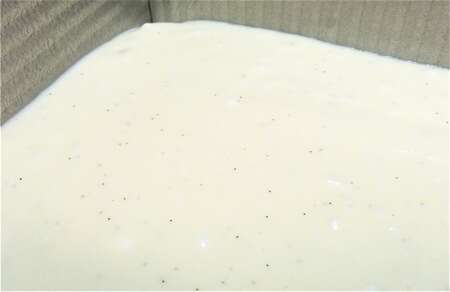 See those flecks of vanilla? Nice! 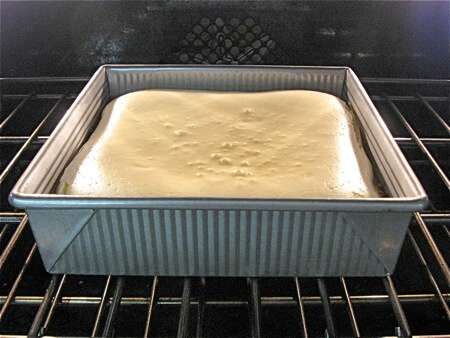 Bake the bars for 30 to 40 minutes, until the filling is set but still soft in the center. An instant-read thermometer, inserted into the filling about 1” in from the edge, will read about 180°F. 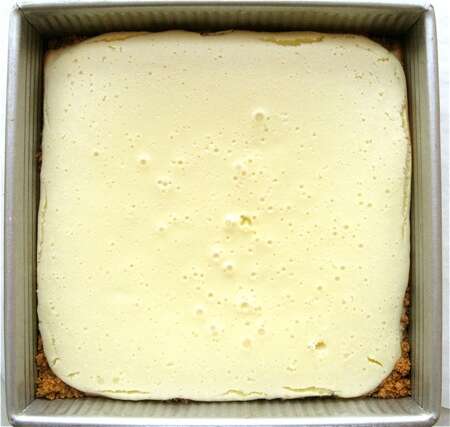 I over-baked these; thus the cracks. I also mixed the filling at too high a speed; thus the bubbles.

Remove the bars from the oven, and cool at room temperature for 30 minutes. Refrigerate until ready to serve. 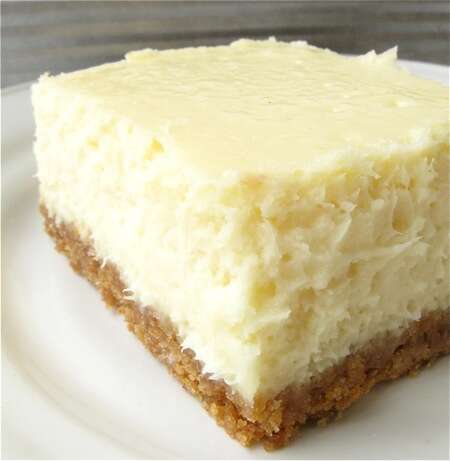 Or not. These bars are delicious all on their own.

OK, want to get fancy for Valentine's Day? Bake the bars in a 9” square span, instead of an 8” square; don't push the crust up the sides of the pan. Baking times will remain basically the same, with the larger pan taking, at most, a couple of minutes less than the smaller pan: go more towards 35 minutes than 40. 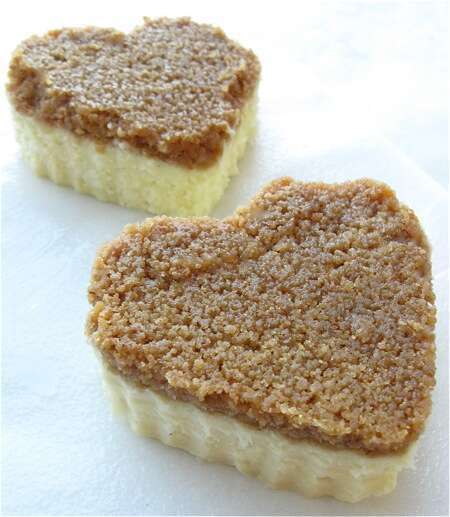 Once the bars have been thoroughly chilled in the fridge, find a heart cutter that's at least 3/4” deep. Cut down through the cheesecake layer, and completely through the crust. Lift the heart out; it should stick in the cutter. Position the heart over a serving plate, and gently press down on it to deposit it onto the plate.

This is a bit of a fussy process. The cake tends to stick; the crust tends to crumble. If you don't mind working slowly and carefully, you should do pretty well after you've tried a few for practice. 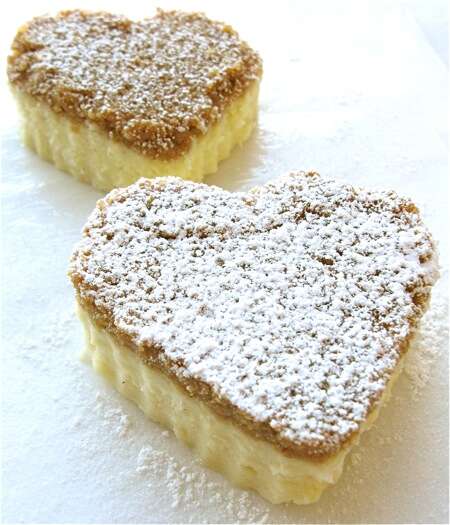 And you can always cover up any egregious crust mishaps with confectioners' sugar.

Frankly, I'd just cut these into squares and call it a day. But for those of you who enjoy taking the time to make something pretty – go for it.

Hi! I want to make these for a wedding reception. Could I make these in a half sheet pan and if so, what would my proportions be? Double? Triple? Help!
If you're using a 9x13 pan, you would use 1 1/2 times the recipe. If you're using a 13x18 pan, 2 1/2 times should do it. At this point, you should use a scale, too. Please give our Hotline a call at 1-855-371-2253 for more information. Laurie@KAF
I made these yesterday for our 4th of July party and served them with fresh berries and whipped cream. (Sadly, no one around here likes cooked berries, so no flag pie.) And for the chocoholics, my daughter made brownies. It was a wonderful spread that pleased everyone. This was my first cheesecake attempt, and I am thrilled to say they are as easy and delicious as promised. It is always exciting to have success on the first try--with PJ's post at my side, I knew it would go well. Thank you!
Can you store them in the freezer? If so, for how long?
Sure, cheesecake freezes very well. Just make sure to use them up within a month or so. Jon@KAF
This didn't turn out for me. Every other recipe I have read says it should be taken out of the oven at 150. Why 180 for this recipe?
I'm sorry this recipe did not turn out for you. Please give our Baker's Hotline a call at 855-371-2253 to help you troubleshoot this or any recipe. Barb@KAF
I'm looking for an easier cheese cake to put in the middle of a red velvet cake. The one I have used in the past requires you to bake it in a water bath. Do you think I could bake this without the crust in a spring form pan? And do you think it would hold up in the center of red velvet cake?
You might want to try the filling for our Cream Cheese Carrot Cake Muffins, Aubrey; might work easier than a liquid cheesecake batter. PJH
Hey! I baked these today and had a few questions. First, I have an electric oven and it has conductors on both the bottom and the top sides, so the top browned. Is there any way I could cover with a foil on top? If so, how long into the baking should I do it? I also baked it for 35 minutes and felt that it was a bit overcooked. I don't have an instant read thermometer so do you think I should cook it a bit less? Other than that, I loved it! I used digestive biscuits for the crust and it had this wonderful caramelly flavor. Yum! I would recommend baking the bars on the very bottom rack, so that the top is as far away from the top heating elements as possible. I would also check the bars after about 25 minutes. The center should be just jiggly when you gently shake the pan. It will continue to bake once you remove it from the oven and should set up nicely. If you have additional questions, give us a call on the baker's hotline and we'll be happy to help! ~Mel