A virtual trip to our Baking School

Most of us bake alone. Some of us bake with friends. But what an experience, to bake with a whole group of friends. Hands in dough, mixers whirring, sugar and flour and butter and vanilla and chocolate at your fingertips, lots of oven space...

We have classes most days of the week. Classes for adults, for kids, for parents and kids together, for professionals...  King Arthur's mission is to teach the world to bake. And so far, so good—we're currently the largest educator of home bakers in the world.

Hands-on classes vary in size from about 6 to 12 people. One recent bread, soup, and dessert class had 10 students—some of whom came with a friend, some of whom soon “buddied up” with the baker next to them. You never bake alone at King Arthur Flour.

Planning a trip to Vermont? If not—maybe you should! Take a look at what we're offering this spring at our Baking Education Center.

And if you can't get to Vermont, find a baking buddy and bake some Sesame Semolina Lunettas for a virtual trip to our school.

How to make Sesame Semolina Lunettas

Yeast bread is basically, flour, yeast, salt, and water. But little ingredient tweaks along the way can change that basic bread in subtle by very appealing ways. Take semolina, for instance. This cornmeal lookalike is actually a coarsely ground “flour” made from high-protein durum wheat. When used to replace some (or all) of the all-purpose or bread flour in your recipe, it imparts creamy color to the finished loaf, plus the barest amount of added crunch in the crust.  I like to use it in pizza crust as well as bread.

And what about diastatic malt? Its active enzymes help yeast grow fully and efficiently throughout the fermentation period. Professional bakers use it to enhance bread's texture and improve its shelf life. Again, it's subtle... but you'll see the results below. Rather surprising results, actually.

Oh, and one more thing: NON-diastatic malt is  a sweetener, particularly suited for pancakes and bagels. Don't confuse it with diastatic malt, as it doesn't have the same effect on yeast. 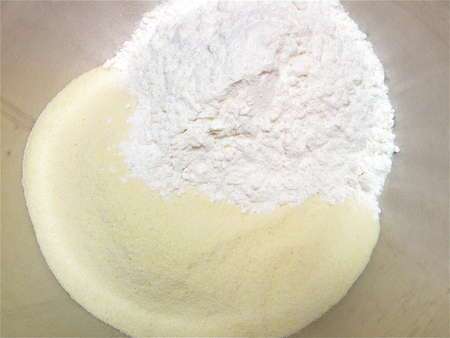 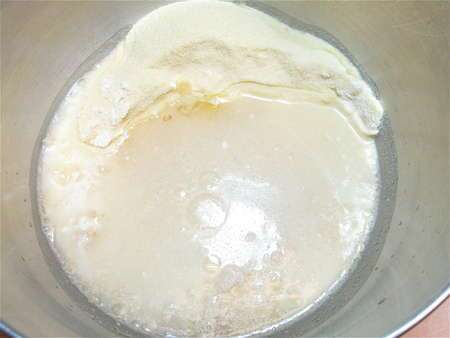 Next, water and olive oil. Or, for added sesame flavor, toasted sesame oil. 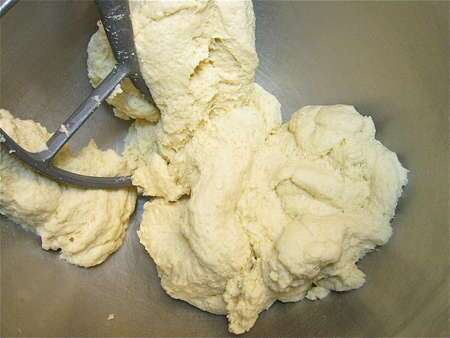 Mix till well combined. The dough will be rough looking. 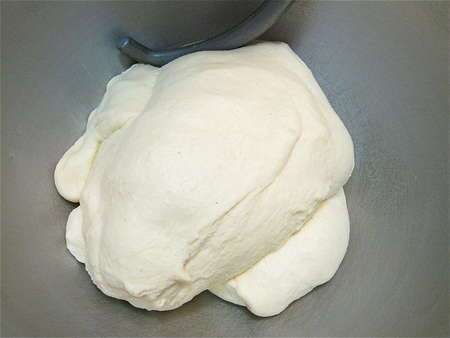 Switch to the dough hook, and knead for 6 minutes; this develops the gluten, allowing it to capture carbon dioxide from the growing yeast. Result? Dough that rises. Without the structure that gluten provides, the dough would leak CO2 like a sieve, and sit there like an inert blob rather than rising.

Oh, by the way: how do you like the way this dough shaped itself into a faux roasting chicken? 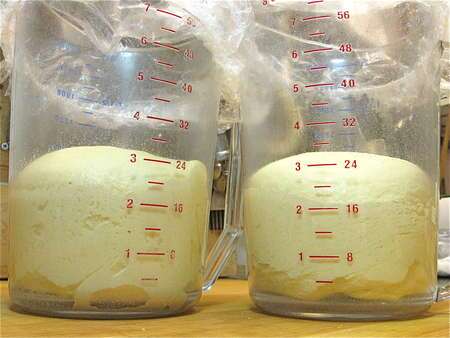 I decided to test the diastatic malt by making two batches of dough side by side. The one on the left has malt; the one on the right doesn't. Let's see what happens. 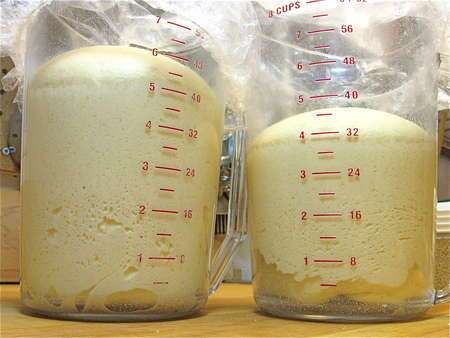 Ninety minutes later—holy mackerel, the dough with the malt certainly did rise higher. 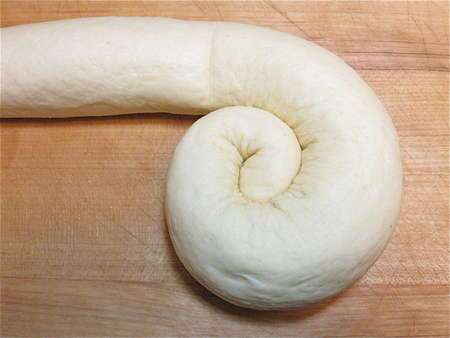 Every time I stop by our Baking Education Center, I learn some cool new thing.  This time, it was a simple “S” shape that makes a very pretty loaf—in Italian baking, a lunetta. So, I rolled the dough into an 18” log, and curled one end towards the center. 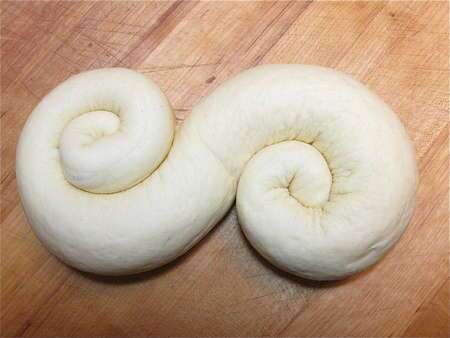 Then I did the same with the other end, making a tucked-in “S.” 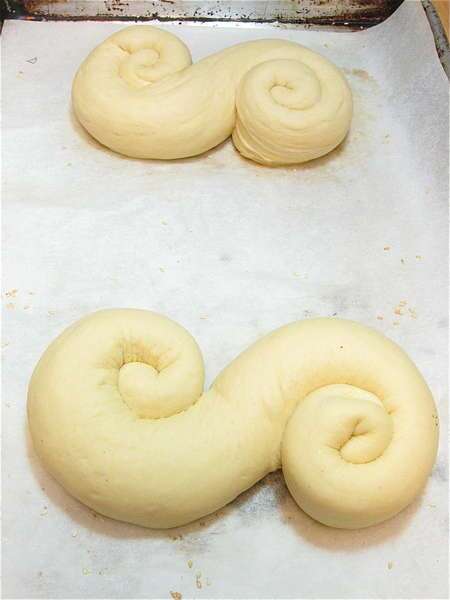 Here are my two loaves side by side—the one with diastatic malt at the top of the picture. 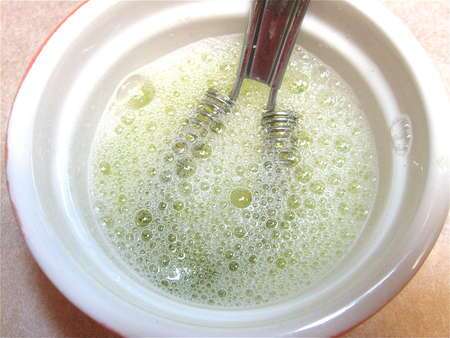 Once the bread is risen, you'll brush it with egg white whisked with water. Why whisk it with water? To make it spreadable; without water, it's awfully gluey. 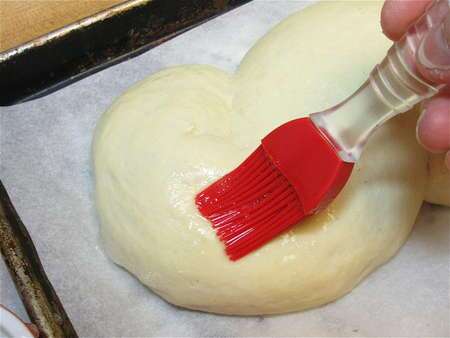 Brush on the risen loaves... 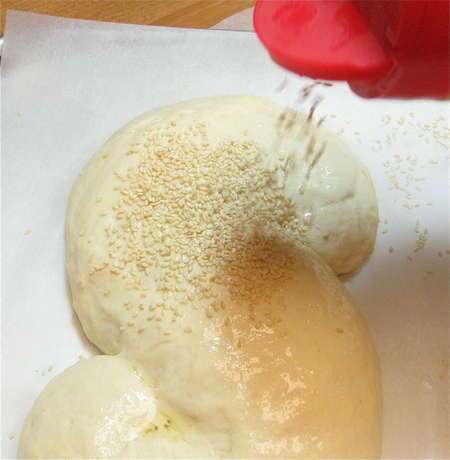 ...then sprinkle with sesame seeds. 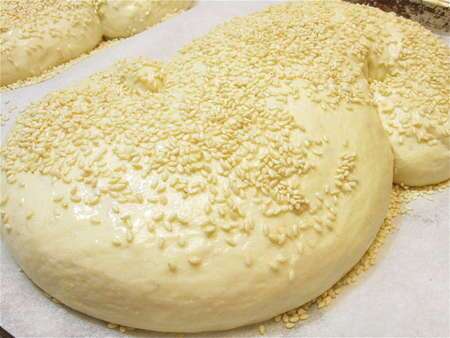 Why wait for the loaves to rise before adding the seeds? Because if you add them before the loaves rise, you'll get a sparser effect; the rising dough pushes the seeds away from one another, allowing more crust to show through. 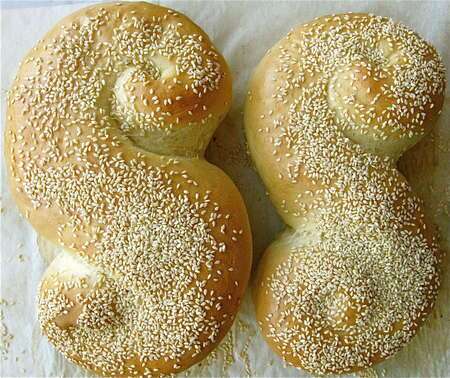 And here they are, baked. The loaf without the malt (on the right) didn't brown quite  as well, though the difference was slight. Which makes sense, since diastatic malt converts starch to sugar, and sugar promotes browning. And, the loaf without malt  didn't rise quite as high. At the end of the day, the loaf with malt simply looked better.

My verdict? Diastatic malt isn't critical, but if you're a dedicated bread baker who likes a really nice-looking result, get some and fool around with it. 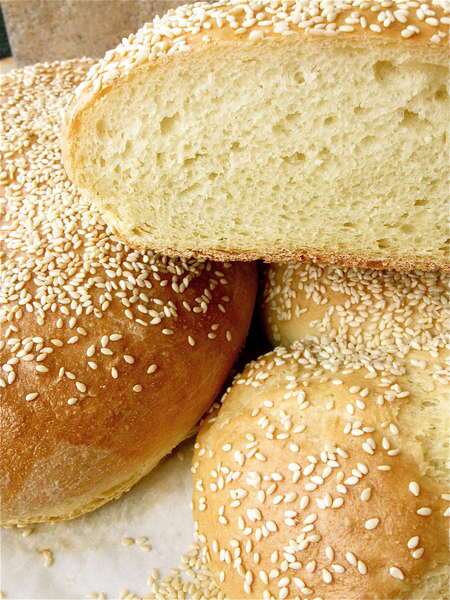 Check out our Baking School classes if you'd like to come visit us for the real thing!

How come you do not score the bread?
Mary Lou, it's not traditional or necessary for this style of bread, but you're welcome to score yours if you prefer. It's just an aesthetic decision and doesn't impact the structure of this particular recipe. Happy baking! Kat@KAF
Can you put the bread dough into a regular loaf pan so that the slices can be used for sandwiches?
That should be just fine, Jennifer. Bake it at the same temperature until the interior of the loaf reaches about 190°F. Happy baking! Annabelle@KAF
I love the taste of this loaf! I have made it several times and am curious about what you are doing to get the dough to retain its shape. I have tried this both with and without the diastatic malt powder (I much prefer it with) and my dough refuses to retain the S shape after the second rise. I put the S-shaped dough on parchment on a baking sheet and allow it to rise (covered with EVOO-greased plastic wrap) inside my oven which has a pilot light and is therefore a cozy, draft-free spot for the dough to rise. Once the dough has risen for the second time, the S shape is almost completely lost (it still retains the curvy outside edges, but other than that, it is sort of a non-descript blob). Any suggestions about what might be going on? Thanks so much in advance for all your help and of course, all of your wonderful recipes!
I suspect your shape letting go on the second rise is due to the way you're shaping it. It helps to pat the dough into a rectangle, take the top edge, and fold it down about 2". Press the edge you pulled down into the flat part of the dough, to tuck it in and create some tension. Repeat this process until the dough is all rolled up into a log. Then gently roll the log to the length you desire before shaping into the "s". If you're just patting the blob into the semblance of the lunette, without building some structure into the dough itself, it's likely to do what you're describing as it rises for the second time. Susan
Thank you for this tip, Susan! The next time I do this dough, I will follow your suggestions. I was shaping the dough by shaping it into a log, and then rolling by hand. I see what you mean about tension. Thanks again!
Awesome, Jolie. Hope it does the trick!~Susan
Amy, I just got my self a new oven thermometer and did a little test. If the thermometer is correct, the oven is actually running quite hot, around 40 degrees (F) hotter than expected. That leads me to believe the loaf just didn't get much time for oven spring before it set. Does that interpretation hold water? I have a feeling your dough was over-risen. Give us a call on the bakers hotline and we'll be happy to share our tips on figuring out how well your dough is proofed (an easy test called the "punch in test.") However, if your oven is baking that hot, it can definitely affect your baking overall. Glad you were able to take that equation out of the picture! ~Mel
I've tried this recipe but haven't been able to get the light texture that your bread has. I believe the ingredients were properly measured, and I used KA flour and diastatic malt (the semolina was from a local Italian market). The dough rose and looked quite puffy when it went into the oven, but the bread did not get much oven spring, and the texture was denser than the bread in your photos. The taste did not seem quite right, either. Nothing awful, but not quite right. Any suggestions on what to investigate? I'm already suspicious that perhaps the kneading was inadequate or the oven was not up to the proper temperature. It sounds like you had a good rise, but that it may have over-risen and collapsed a little in the oven, which would lead to a denser texture. Having a thermometer to monitor the accuracy of your oven is a great idea, because an oven that is too cool will affect the oven spring. ~Amy