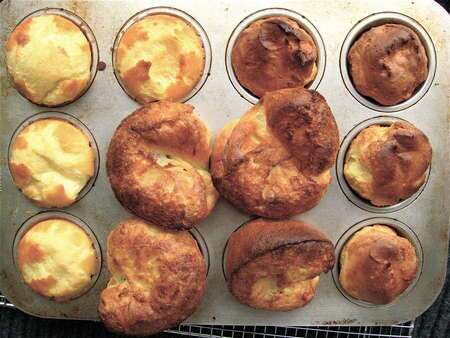 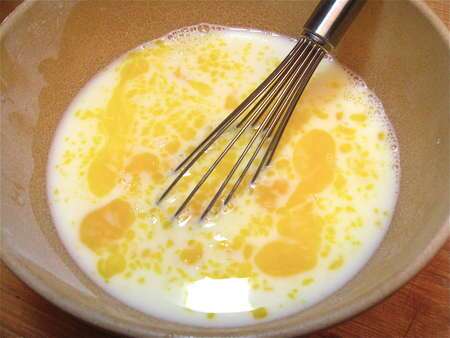 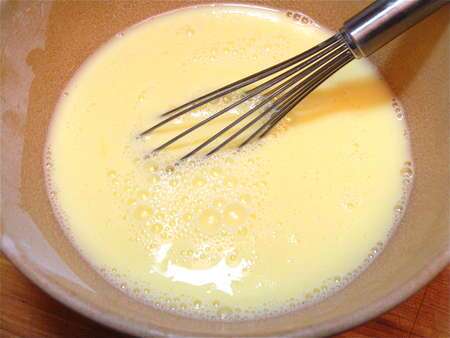 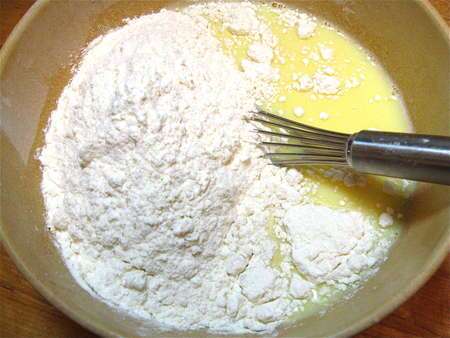 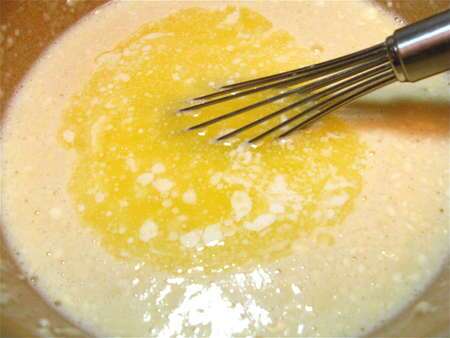 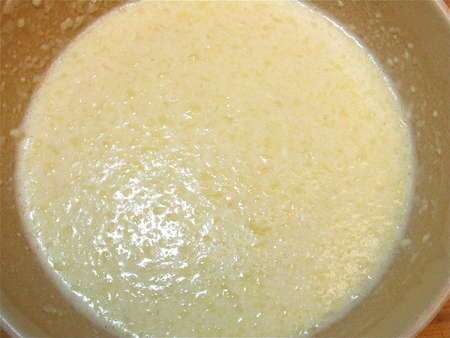 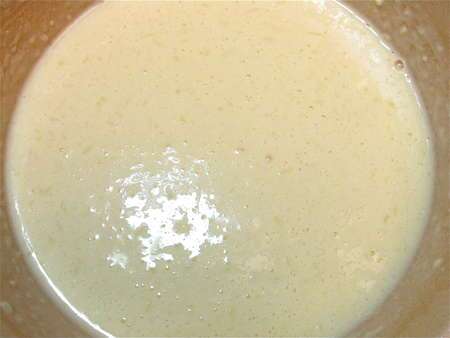 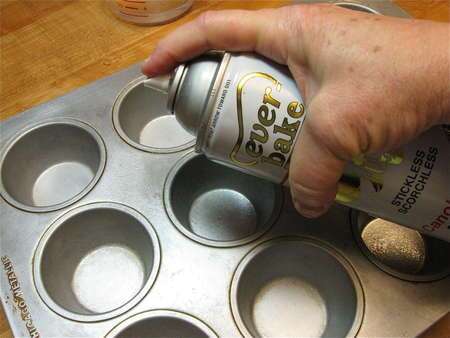 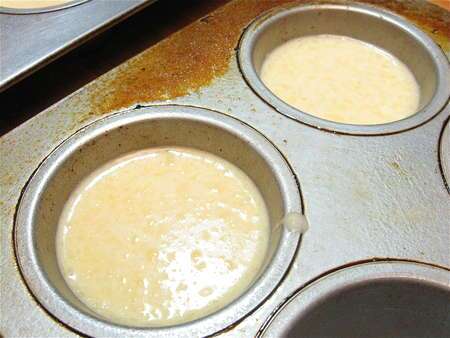 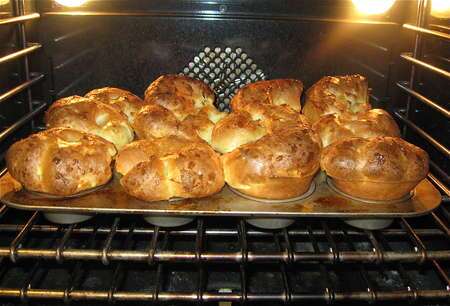 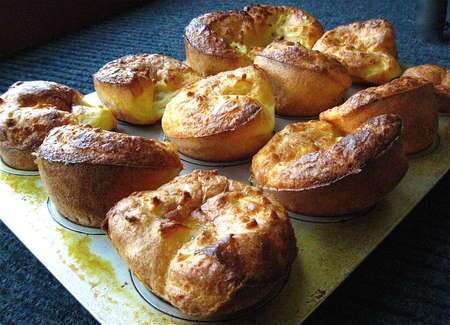 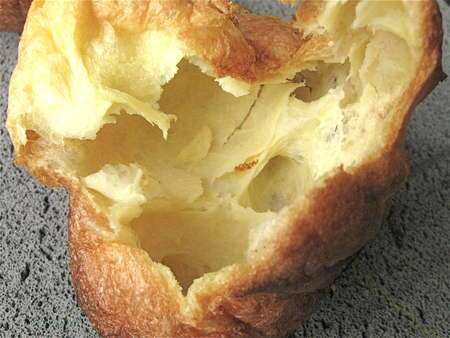 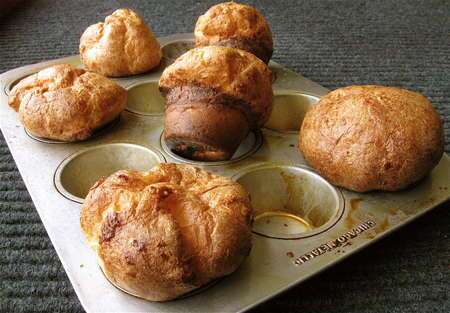 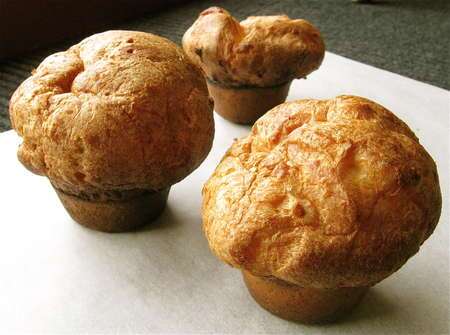 Are they really hard to make? I have never made them before. I am more of muffin or biscuit making person. And I have a gas oven that runs about 25 degrees higher than you set it. Should I try it since I have that problem with my oven? I have an oven thermometer so I can adjust the heat. Kimberly, set your oven at 425°F and have at it. NO, they're not hard to make - they're exceedingly easy to put together and bake... you're just never sure if they're going to pop. Thus my request that people make these and report back. I'm hoping to find as foolproof a recipe as possible, and I'm hoping this is it, so give it a go and let us know - thanks. PJH
Delicious. Gorgeous. Absolutely perfect. I've never made popovers before, either--yorkshire pudding, yes, but not popovers. WE fought over the last ones. My kids helped make them, and are confident they can make them on their own. Did I mention the kids in question are 10 and 12? They don't understand the big deal, of course. They're insisting on having them at least twice a week now. Fine by me, since the deal is they're cooking!
My question was going to be one of convection oven temp. Would you keep it the same (450) or drop the temp down (425)? Also the second lower temp, from 350 to 325? What do you think? Grace, from what I know about convection ovens (very little), I'd say drop the temp. down... PJH
I have made my popover recipe in an electric oven for 20 years without a problem.. Now we have a gas oven and have failed twice. No popover.
Sorry to hear you're having trouble with your new oven, Pugs. An oven thermometer might be a handy tool to check out how hot your oven is actually getting. It may just need more time (past the pre-heat signal) to fully come to temperature, which is common with gas ovens. You may need to calibrate the temperature you set your oven to or simply wait a bit longer before baking — we hope this helps get your popovers back on track! Kye@KAF
Yum! I just pulled them out of the oven. I'm going to use them to break my fast (Yom Kippur) tonight. They look GREAT, smell AWESOME and are nice and solid. I baked them using convection to get a crispier exterior. Nicely browned, but not over done. I'll let you know... Yeah Mike! First in line with the results. Glad to hear they turned out for you. Have a good break-fast... PJH
I am up for the challenge! I'll try this recipe on Monday if it is not to late :)
I haven't made these yet, but I've never had trouble getting wonderfully puffy popovers. (A tsp of herbs de provence is a wonderful addition) I've always preheated the pan, with buttered cups (the butter runs down and pools in the bottom of the cup, but the batter will push it back up the sides again.) The best results were with the old cast iron popover pan I had, which I could get really hot. I don't let the muffin pan get as hot in the oven, preheating the pan for maybe 5 minutes after the oven has preheated. I've never buttered the pan. I'd rather have a little popover sticking than deal with cooked on oil glaze, as on your pan. Harold McGee has a wonderful article today in the NYTimes about why butter - rather than oil or clarified butter - keeps things from sticking. http://www.nytimes.com/2008/10/08/dining/08curi.html?_r=1&em&oref=slogin
I'm excited to try this. Although I'm able to make lots of items that others consider difficult, I just CANNOT master popovers. It has become a joke in my family: baklava - no problem, Thanksgiving dinner - done, home-made marshmellows - figured that out. Popovers with a total of 5 ingredients - nearly impossible. I'll report back after this weekend. LRD
Any inconsistencies with my popovers had to do with batter temperature. Try this: Make sure the eggs are at room temperature. Warm them up in hot water for 5 minutes if taken directly from the refrigerator. Warm the milk up in a pan or microwave before making the batter. Finally, preheat your greased muffin tin/popover pan in the oven before pouring in the batter. Hope this helps.